UPDATE: New information and deals roundup of the latest Toyworld, Kmart and Toys R Us catalogues.

UPDATE: Big W’s Toy Sale Catalogue kicks off online at 7PM AEST and instore on the 26th of June. Full details of the sale below.

A new month and a new season is officially upon us! To kick off Winter, here’s the usual monthly sales post where I will compile some of the best June LEGO sales across Australia!

Another thing to look forward this month is the annual Australian Toy Sale. So far, the major retailers are keeping mum but I suspect that news will surface soon enough, especially since retailers like Myer have started to put their exclusives like the Parisian Restaurant on their shelves already.

If you spot any outstanding deals that I’ve missed out on, drop a comment so I can include them in the post! 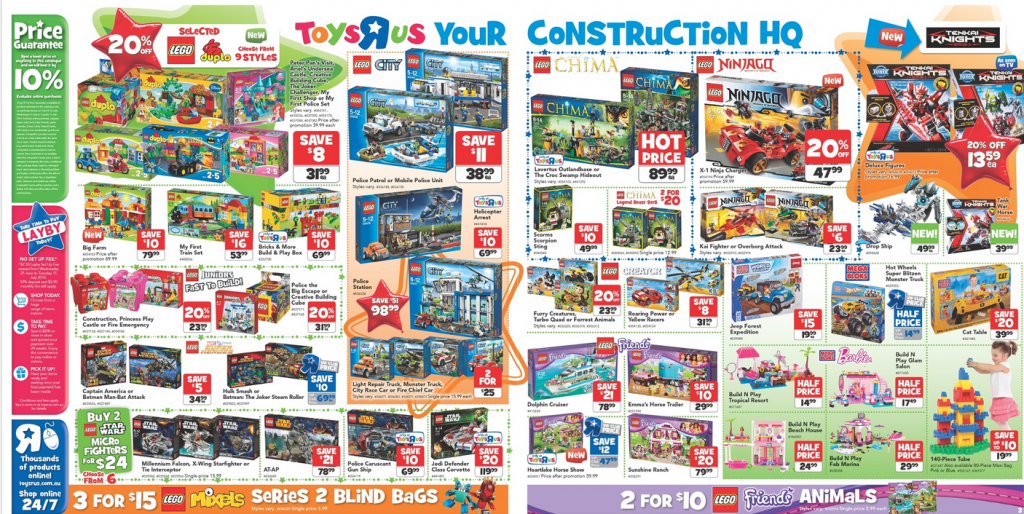 What would a Toys ‘R’ Us LEGO sale without a haphazard catalogue featuring what seems to be every LEGO set in their inventory! The catalogue gets off to a good start with promising 20% off till you realise its for selected items only. It’s quite a pain having through sift through the entire catalogue because to be frank the deals at Toys R Us are pretty weak. Some sets are about 20% off but others like the Hulk Lab Smash set are barely worth since you only get a paltry 10% off. That and you have to be a Toys R Us member for some of the discounts to apply.

That said, in an attempt to be competitive, Toys R Us has special Price Guarantee where they will beat any advertised price by 10%. Sound good? Here’s the fine print:

Toys”R”Us Price Guarantee is available for products advertised only, on purchases during our Toys”R”Us Sale, Wednesday 25 June to Tuesday 15 July 2014. Excludes online purchases, nappies, wipes, baby food, baby formula, game consoles, iTunes Cards, Prepaid Cards, Gift Cards or non merchandise goods and services. Competitor’s product must be in stock at a retail outlet within the same city or town. Product must be identical (e.g. same brand, model and colour). Competitor’s advertised price must be current. Price Guarantee is not available when the competitor’s lower price is due to category or storewide discounts, conditional sales, package deals, trade-ins, damaged stock, demonstration or discontinued lines and loyalty or third party offers. We will not match online retailers, fire or liquidation sales, clearance and warehouse outlets. Competitor’s price will be matched, and a further 10% discount will be taken off the matched price.

Basically, this rules out 20% off sales that Myer has for example, but there are a few sets that you can take advantage of using Big W’s catalogue, which conveniently has a unique price for most of their LEGO sets. Here are the ones that stood out to me.

Not too shabby, especially for great sets like the Dolphin Cruiser and Police station. The only problem I can foresee with this is that you won’t be able to find any LEGO sets at Toys R Us as they always seem to get cleaned out of LEGO (except for Friends) whenever I drop by. The ones in Westfield Chadstone and Doncaster especially – the shelves are always depressingly empty.

There are also several exclusives featured in the catalogue:

Overall, a decent Toy Sale catalogue from Toys R Us Australia, but there’s always room for improvement. The Price Guarantee offer is pretty cool, but it gets hampered by the terms & conditions. Hopefully with the new catalogue, it means that they’ll be able to fill their shelves with LEGO. I recommend going down to Toys R Us soon, because they sell out of LEGO incredibly quickly.

Not wanting to miss out on the lucrative LEGO market, Kmart is also kicking off their toy catalogue this week, nicely timed to take advantage of the school holidays and go toe to toe with other retailers eager to capitalize on the Australian Toy Sale and End of Financial Year frenzy.

Despite a nice spread of LEGO deals (and a really neatly designed catalogue with minimal clutter), Kmart’s best deal is actually found online.  The Simpsons House is available on Kmart’s website as an online exclusive for $259, which is inclusive of shipping [Update: seems to be sold out already]. That’s a fantastic deal on this hugely desirable set, and with the set being sold out in Myer (who has it advertised at the same price), this is probably one of the last few chances you stand to score this set for cheap. If you want it, don’t hesitate and get it immediately before it all sells out.

The deals in Kmart’s Toy Sale catalogue pale in comparison with Myer’s convenient 20% off all LEGO or the great discounts in Big W’s catalogue, but there are some decent savings. Here are my top picks:

Out of all the deals, I’ll probably be picking up the Sunshine Harvest set and maybe a few impulse Chima Legend Beast sets if I feel particularly peckish. 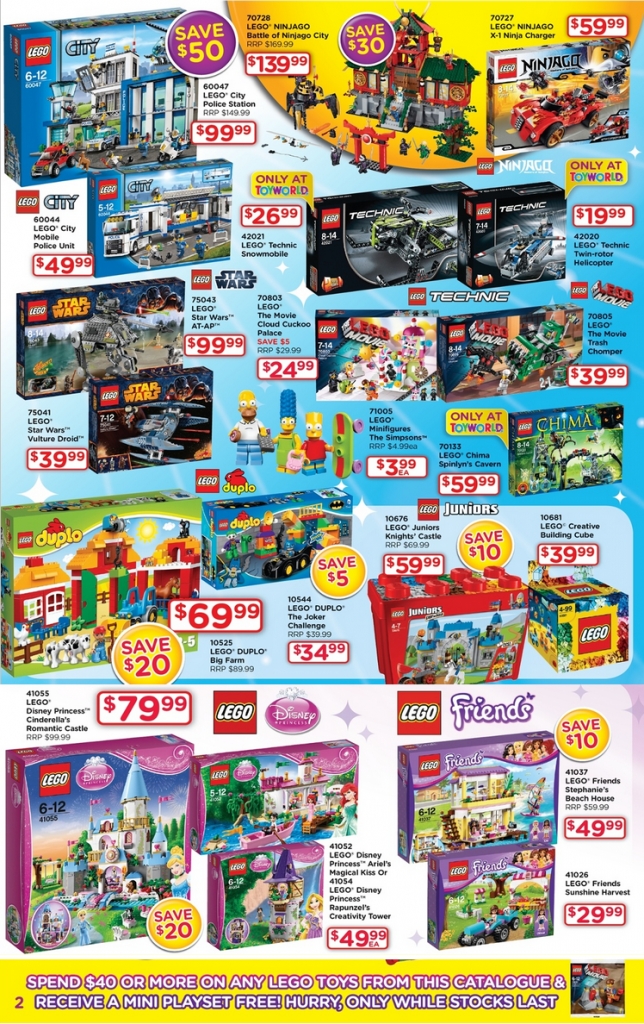 Bit late on this, but I just stumbled upon it. Toyworld have an extremely short catalogue which only lasts for like 10 days. To save you some time, there are no deals in Toyworld’s Toy Sale catalogue that are better than Big W, Kmart or even Myer. 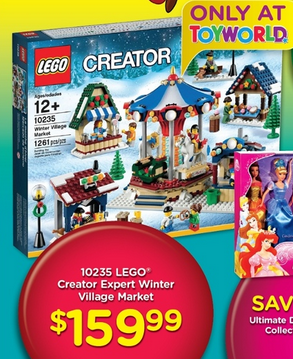 The only highlight I can think of is that Toyworld are carrying the exclusive 10235 Creator Winter Village Market, the most recent entrant in LEGO’s beloved Winter village theme. It’s quite pricey at $160, but it’s the only way you can get it in Australia.

If you’ve been collecting the Winter Village sets, this is a must-buy (I have mine sitting in my living room, waiting to be built) to complete your set. Most importantly, outside of Amazon, this is the ONLY way to get the set as it has been “retired” on LEGO.com’s Australian store. Yup, that means you can’t even order it online. It’s still available in the US LEGO.com store, but who knows for how long more. It’s pricey, and there’s no discount but Toyworld seems to be the only place to get the set, so act quickly unless you want to have to pay a premium to scalpers.

Oh Toyworld also has a promotion where you receive The LEGO Movie Piece of Resistance polybag if you spend $40 or more on LEGO toys featured in the catalogue. Handy, if you ever find yourself needing more Emmets. 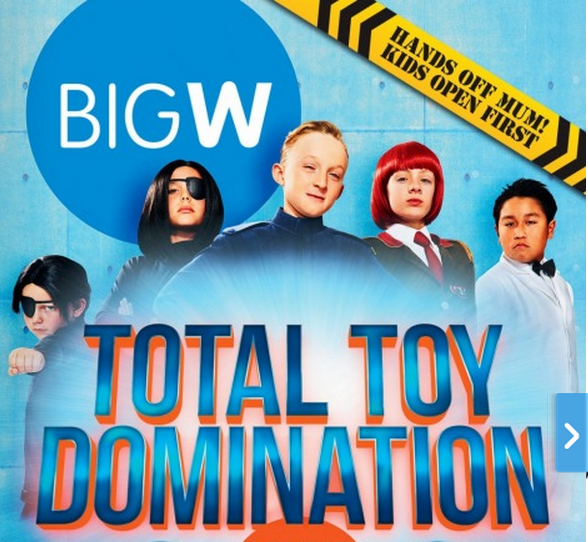 Big W’s 2014 Toy Sale catalogue goes on sale online today at 7pm AEST, 18 June and in stores from 26 June till 9 July 2014. If you are an Everyday Rewards card member (which you can sign up to on the spot), you can start buying toys on the catalogue in store starting from tomorrow, 19 June 2014.

Big W traditionally price their items slightly below RRP which make it a little tricky determining if a  particular set is a good deal or not, and in their Toy Sale this year, have a range of separate discounts on different sets.

Highlights in this year’s Big W toy sale catalogue are the presence of exclusive sets like the Ninjago Destructoid, Friends Downtown Bakery (one of my most anticipated sets!), Legends of Chima Cragger’s Fire Striker, City Arctic Icebreaker and Death Star. Strangely enough, the Red 5 X-Wing Starfighter is listed as an exclusive which I find odd since it was previously available at most major retailers prior to this. It seems like LEGO is rotating exclusives amongst different retailers this year.

Another great piece of news is the arrival of new 2014 Summer themes  such as Arctic, Ninjago, Ice Chima as well as the new creator sets such as the modular-inspired Bike Shop and Cafe. I was expecting an August release date for the sets but it looks like we’re going to get them early courtesy of Big W.

Makes me wonder if other retailers will get the new wave of sets as well, especially since most of the LEGO aisles are pitifully empty and stock levels are severely lacking thanks to the explosion in LEGO’s popularity this year.

I’ve listed down all the LEGO deals from Big W below to help you figure out if a particular set is worth buying as well as contrasting them with their regular Big W price, just to give you an idea of how much you stand to save. Big W’s site is currently offline as they prepare to load their online store with the toys for it to go live at 7pm tonight, so I’ll hopefully be able to update the links when I get home.

While there are some pretty cool exclusives, hot items like Metalbeard’s Sea Cow and The Simpsons House probably won’t last long, so your best bet at securing these sets would be to go instore tomorrow and grab them before the opportunistic scalpers and resellers do. FYI, if you get them to price match the Sea Cow ($309) or The Simpsons House ($259) with Myer’s catalogue, that’s quite possible the best value you can get for those 2 extremely popular sets right now. Myer and David Jones are pretty much sold out of those sets, so get in before everyone else does! 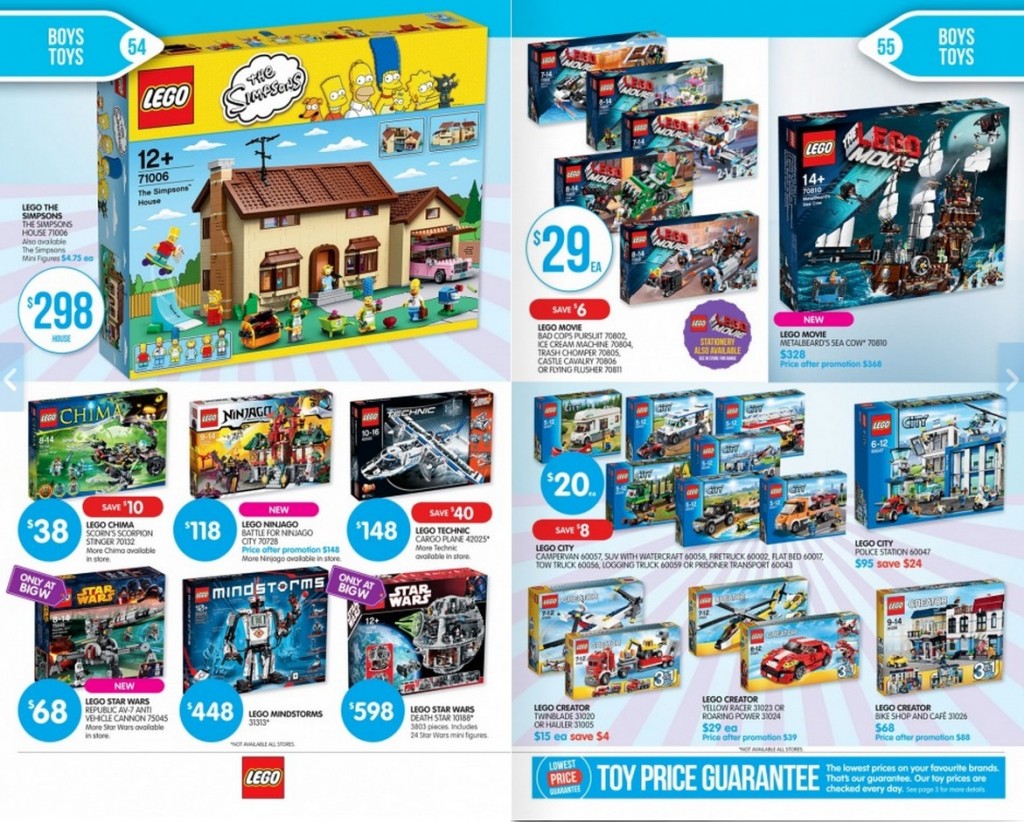 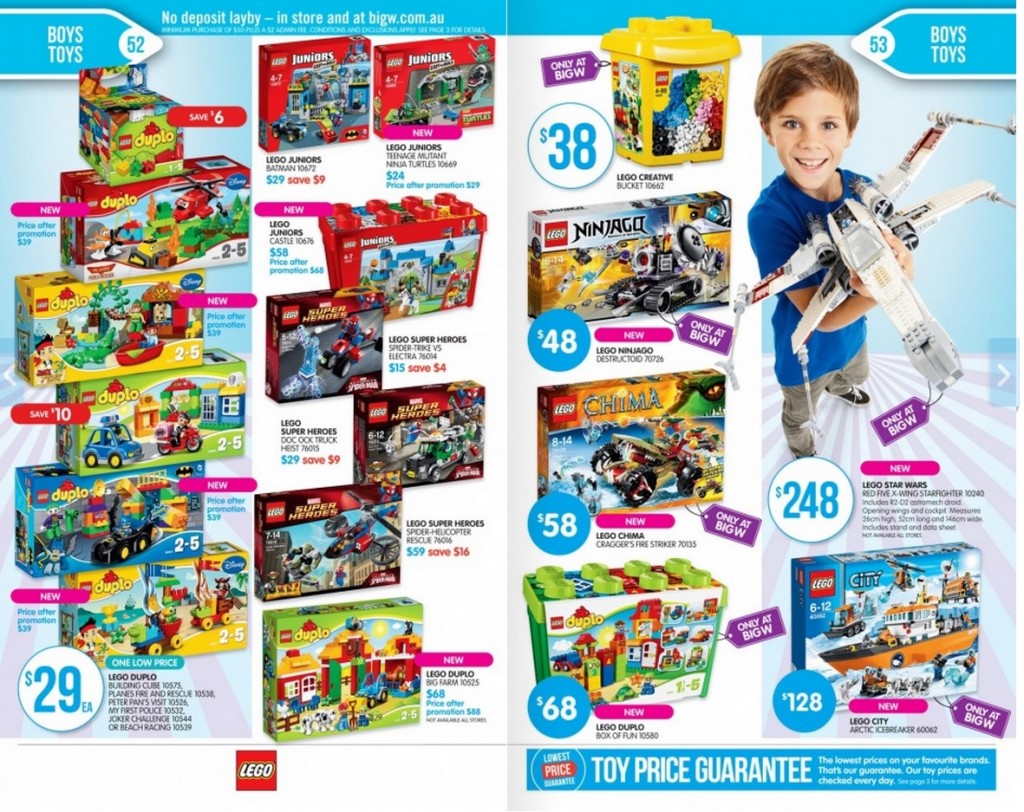 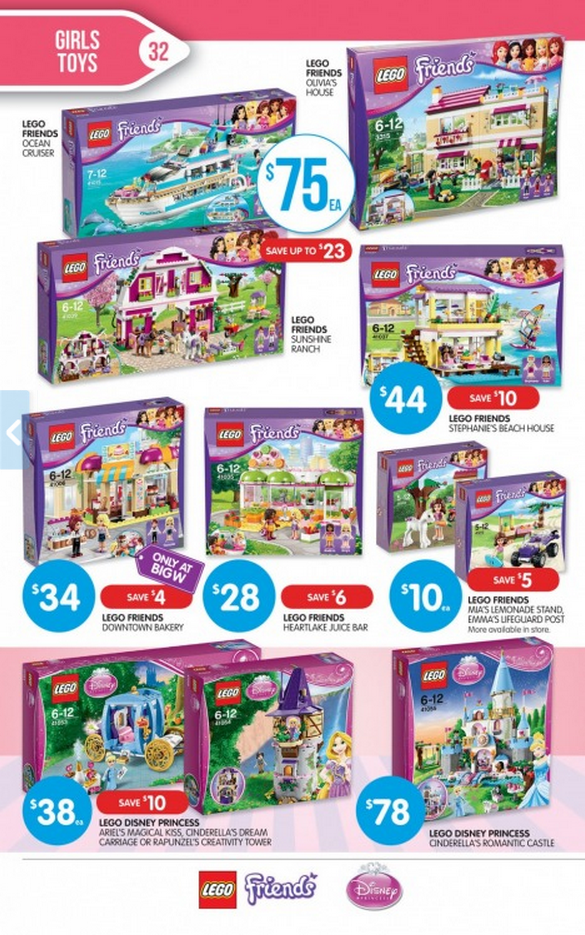 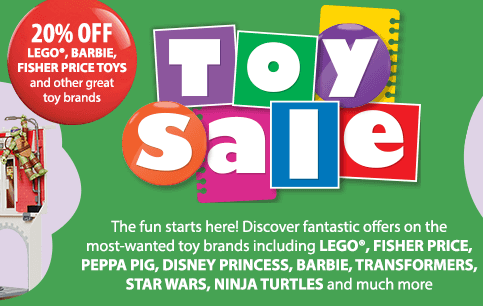 Myer fires the first shot in this year’s Midyear Toy Sale with a really impressive catalogue and sale. For slightly more than a month, we get a very nice 20% off all LEGO at Myer, with some sets discounted slightly higher which I’ve highlighted below.

The Myer Midyear Toy Sale is currently live online and will be available in stores tomorrow, 12 June 2014 till 20 July 2014. Better get in quick before the scalpers swipe all the good stuff!

Other great deals at Myer: 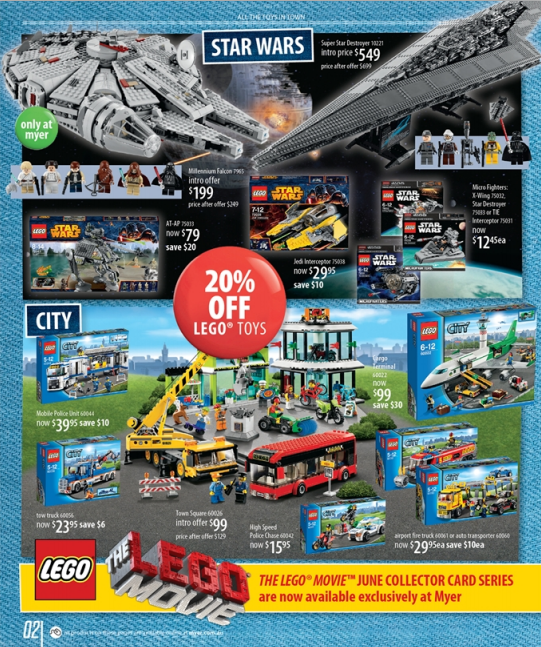 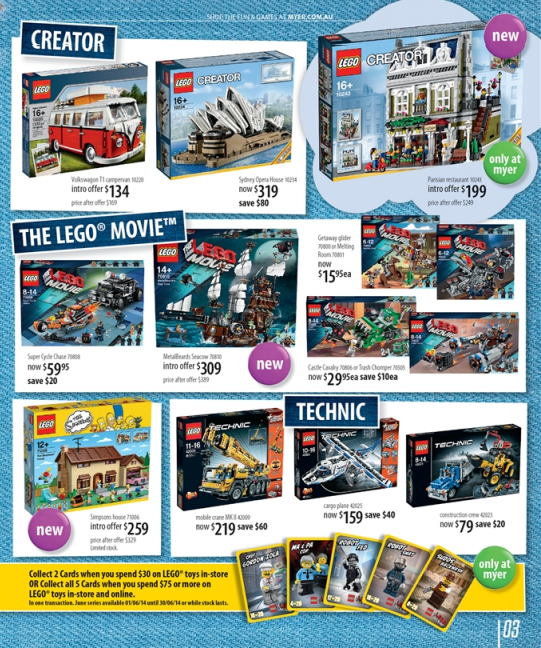 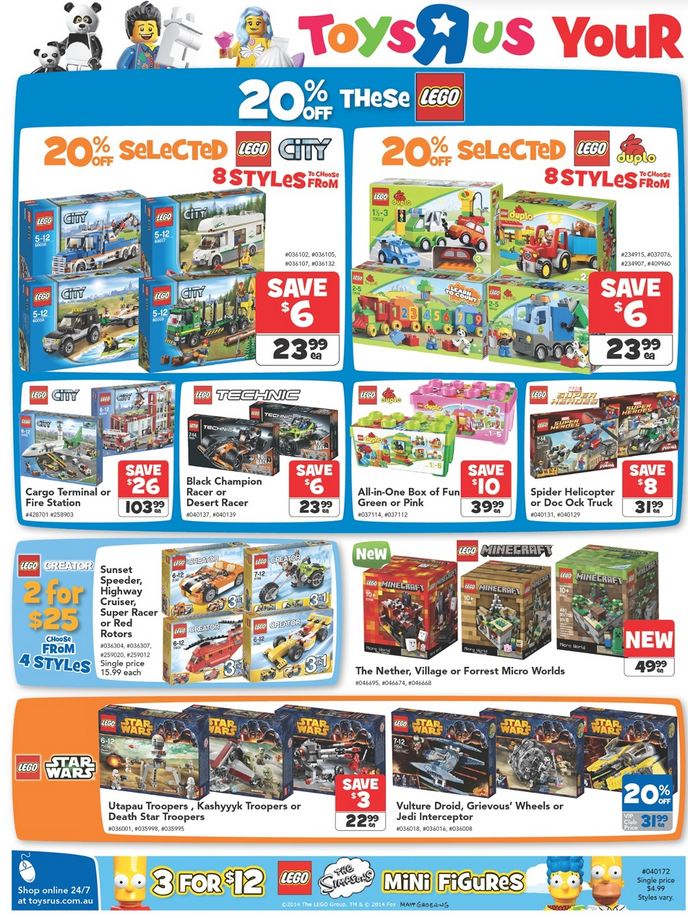 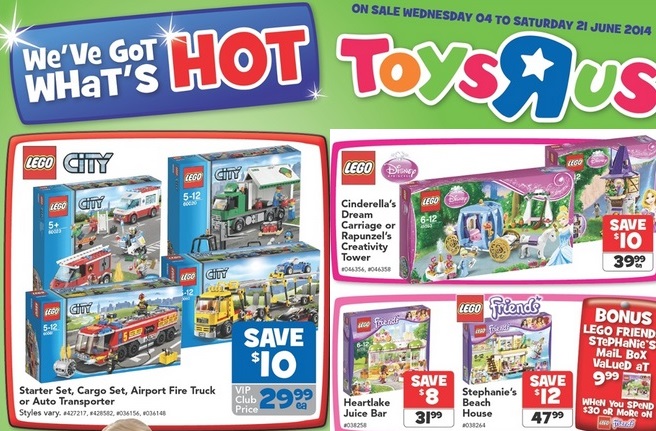 Watch this space for more updates of LEGO shopping deals and sales in Australia!