UPDATE: Target’s Toy Sale catalogue has finally been revealed. Read the July 2015 Sales Post for all the details.

Here we are! At the start of one of the most hectic, stressful and exciting times of the year – the Australian mid-year Toy Sale! In the interest of not spamming sales posts every other day, I’ll be aggregating all the Toy Sale catalogues from major retailers in this single post so that you have all the sales and deals at your fingertips.

If you have been following my blog for awhile, you may also have noticed that I have put together a separate post which lists all the big ticket exclusives that each retailer has.

Any big LEGO sale tends to bring out the worst in the LEGO community, most of the time caused by overzealous AFOLs. I will never forget last year’s toy sale when I saw a bunch of people (you know who you are) clear out ALL the Parisian Restaurants in Myer Melbourne on several large trolleys.

Here’s a few handy tips to help you get what you want and preserve your sanity of mind during this chaotic season. 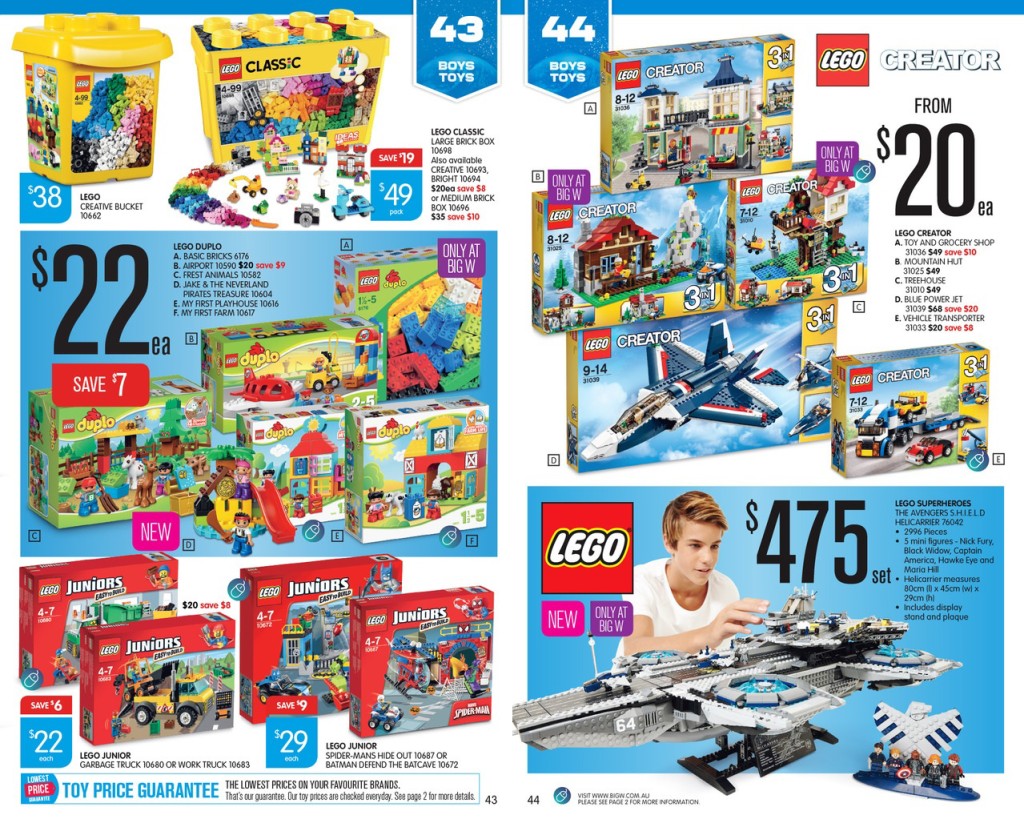 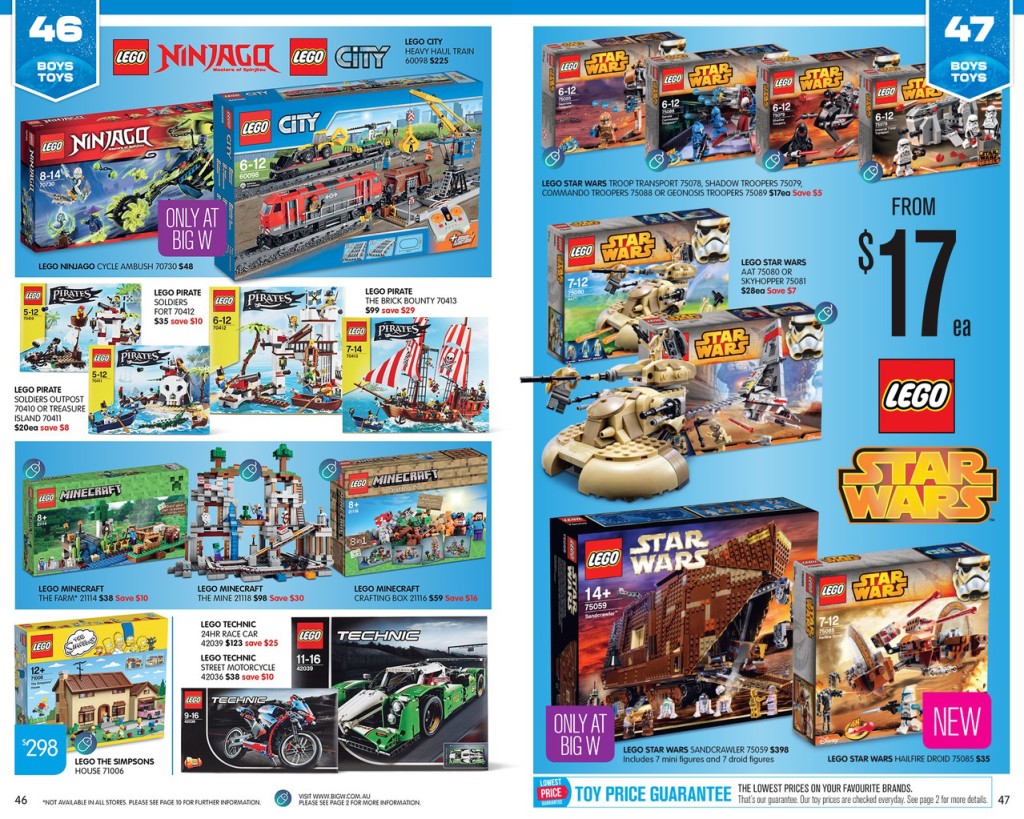 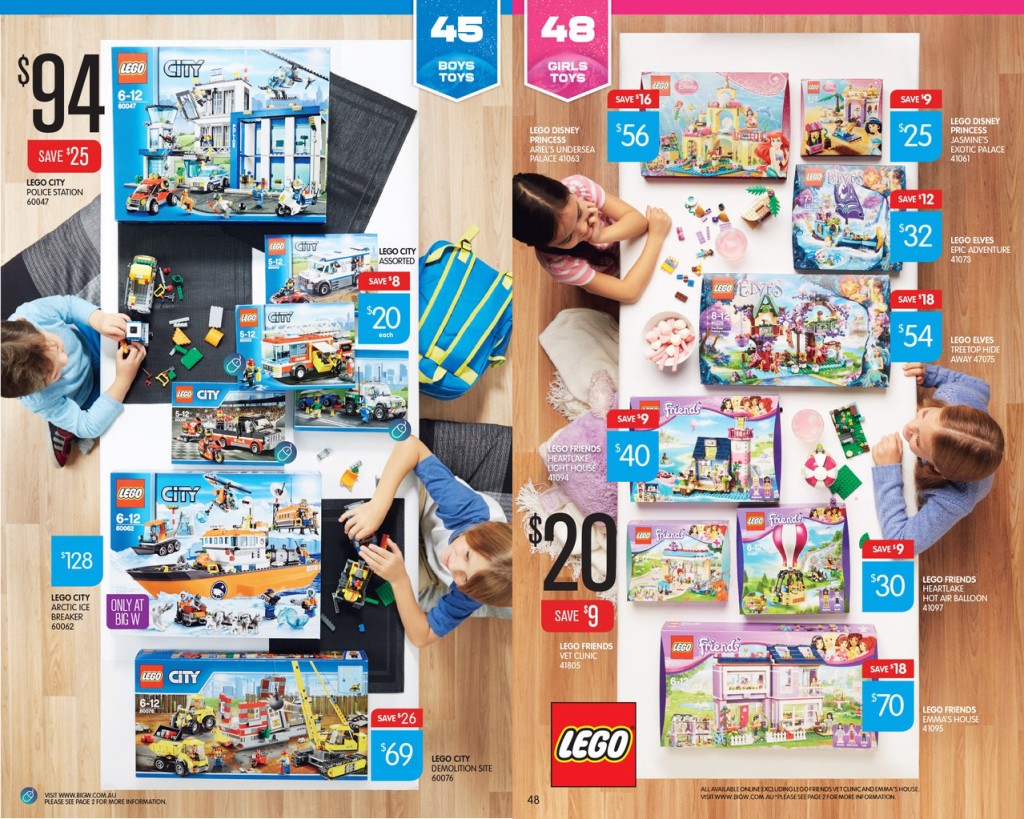 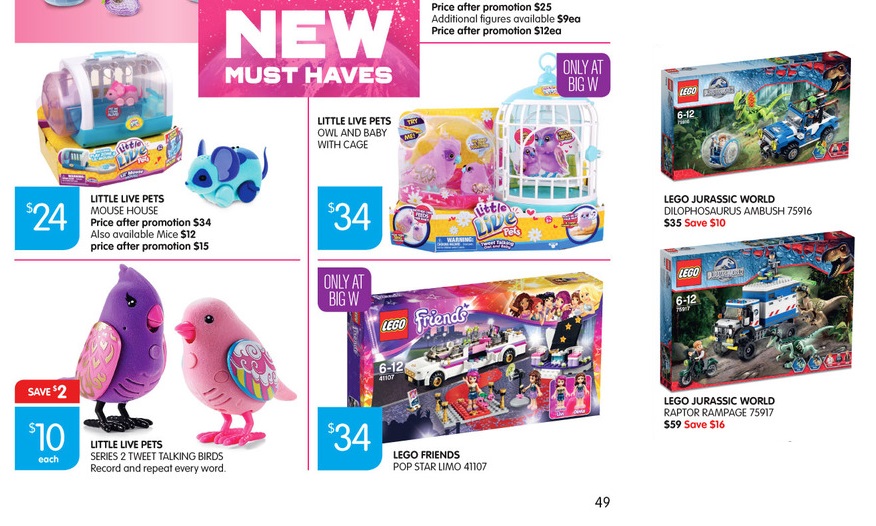 Big W has released their Toy Sale 2015 catalogue, titled Total Toy Domination 2 and it is packed with over 6 pages of LEGO deals and promotions. I won’t list down all the sales, but I’ll pick out a couple of highlights on what I think are the best deals contained in the catalogue.

Big W’s catalogues are always a little confusing, as they enjoy discounting specific sets rather than applying a blanket discount like other retailers. That’s compounded by the fact that Big W’s regular prices tend to be a little lower than the RRP. For comparison’s sake, I’ll be including the standard RRP of the sets instead of Big W’s everyday low prices.

The big draws in their 2015 mid-year toy sale catalogues are the Star Wars 75059 UCS Sandcrawler, 76042 SHIELD Helicarrier and 60098 Heavy Haul Train. Overall, I’m very impressed by Big W’s toy sale catalogue – there are some great details for City, Elves, Friends, Jurassic World and Pirates fans. Their prices are hard to beat and are a little better than the usual 20% discount you would get elsewhere!

The Big W Toy Sale catalogue kicks off on the 25th of June but if you have an Everyday Rewards Card, the discounts are applicable at checkout after scanning it. Happy shopping!

Here are my top picks from Big W’s catalogue:

Curiously, no idea why the Mountain Hut and Treehouse are tagged as exclusives since they’re pretty old sets. Kind of like the opposite of a timed early exclusive. 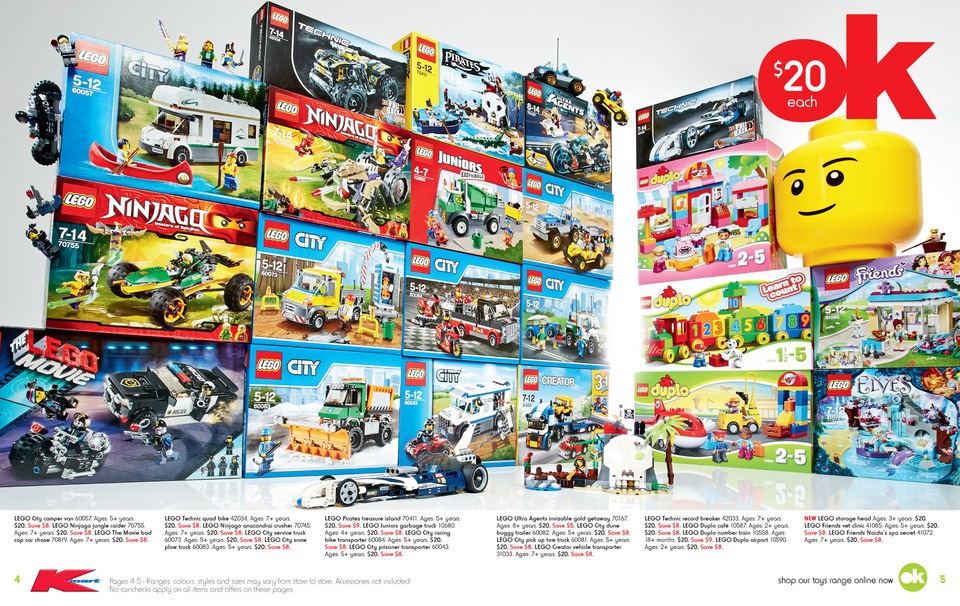 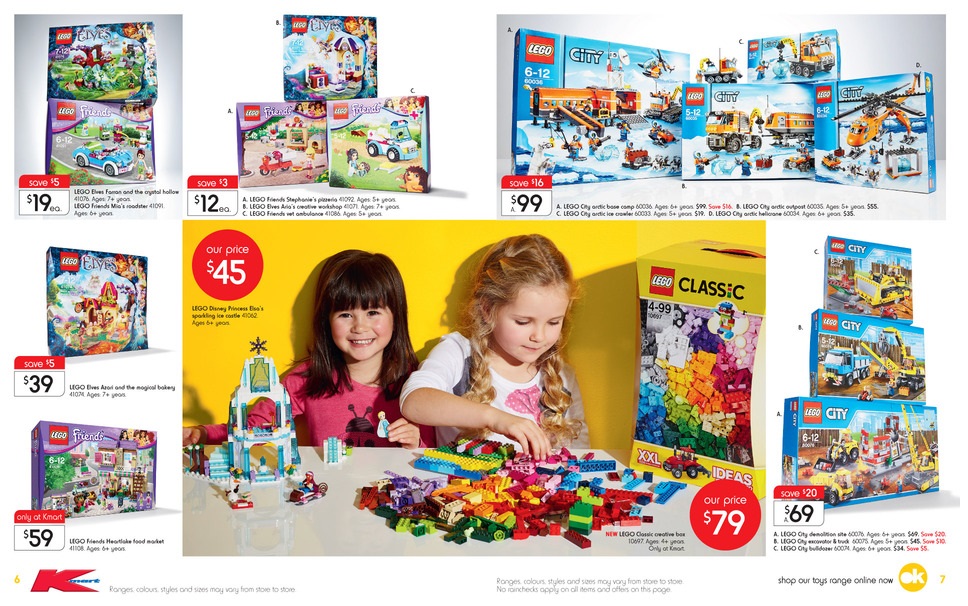 Kmart is also entering the fray with their mid-year Toy Sale catalogue, but unfortunately, there’s not a lot to get excited about in their catalogue. Kmart is light on exclusives and they lack any sort of flagship LEGO set in their arsenal.

Also, they seem to be trying their best to outdo their efforts in horribly designed catalogues. Kmart’s point of difference is a plethora of sets on sale for $20. They’re pretty decent deals if you’re into impulse LEGO buys!

Speaking of exclusives, Kmart only has 41108 Heartlake Food Market and 10697 Classic Creative XXXL Box in their stable, which is pretty underwhelming. The XXXL Box is decent for parts since it packs 1500 pieces, which is great value for $79.

Like Big W’s catalogue, here’s a list of highlights in Kmart’s Toy Sale offering. RRP is based on the set’s regular price, not Kmart’s own reduced everyday prices.

UPDATE: The Detective’s Office and Palace Cinema keep coming in and out as limited stock online. Try your luck, you may be able to get your hands on one if you’re lucky. 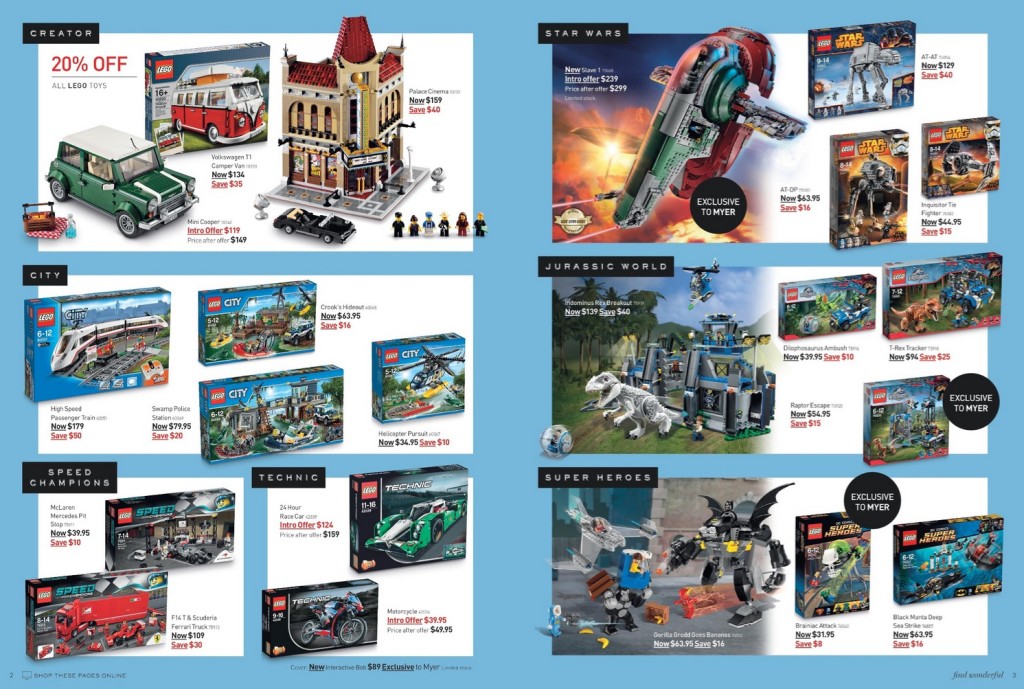 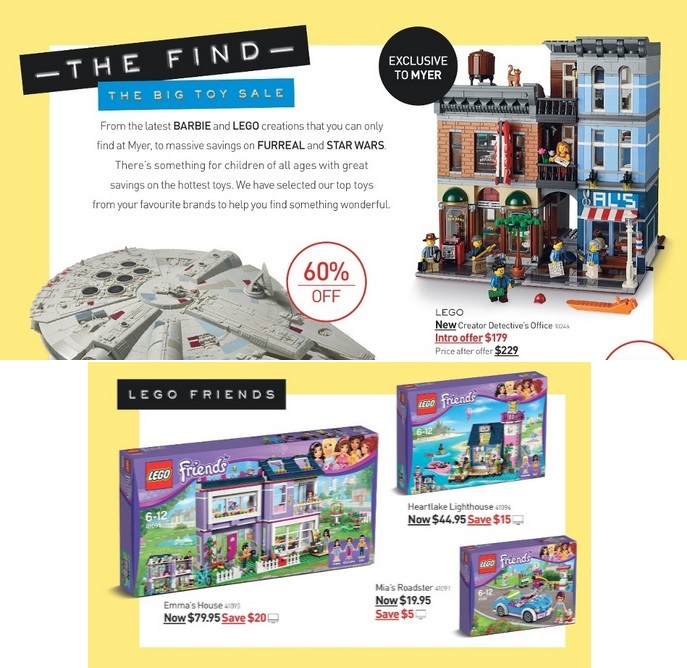 Myer is first out the gates (as usual) with 20% off all LEGO from today (10 June) till 12 July 2015. The sale is both online and instore, but most of the big exclusives like the Modular buildings (Detective’s Office and Palace Cinema) have already sold out online. Myer’s other big exclusive is the Star Wars UCS Slave 1, which is on offer for $239.

I expect the UCS Slave 1, Detective’s Office and Palace Cinema to all sell out within the first few days of the sale (if not today), so good luck if you’re looking to get one!

Watch this space, I’ll update this post with details of more retailer catalogues when they go live! Up next should be Big W’s Toy Sale catalogue, which should go live on the 25th of June!