Update: Myer has extended their June catalogue, with their toy sale (20% off LEGO) now ending on Sunday, 27 July 2014.

My July Australian LEGO sales round up post may seem kind of late, but truth be told, there hasn’t been that many new toy sales or promotions till now. With retailers such as Myer, Big W and Kmart winding down their June Toy Sales, Target Australia has finally decided to lift the curtains off their Toy Sale, dubbed The Greatest Toy Sale On Earth. That’s a pretty bold claim. Let’s see if it’s legit or all hyperbole.

In addition to Target, Toys ‘R’ Us Australia also has a brief Buy 1 Get 50% off your second item on specific LEGO themes. 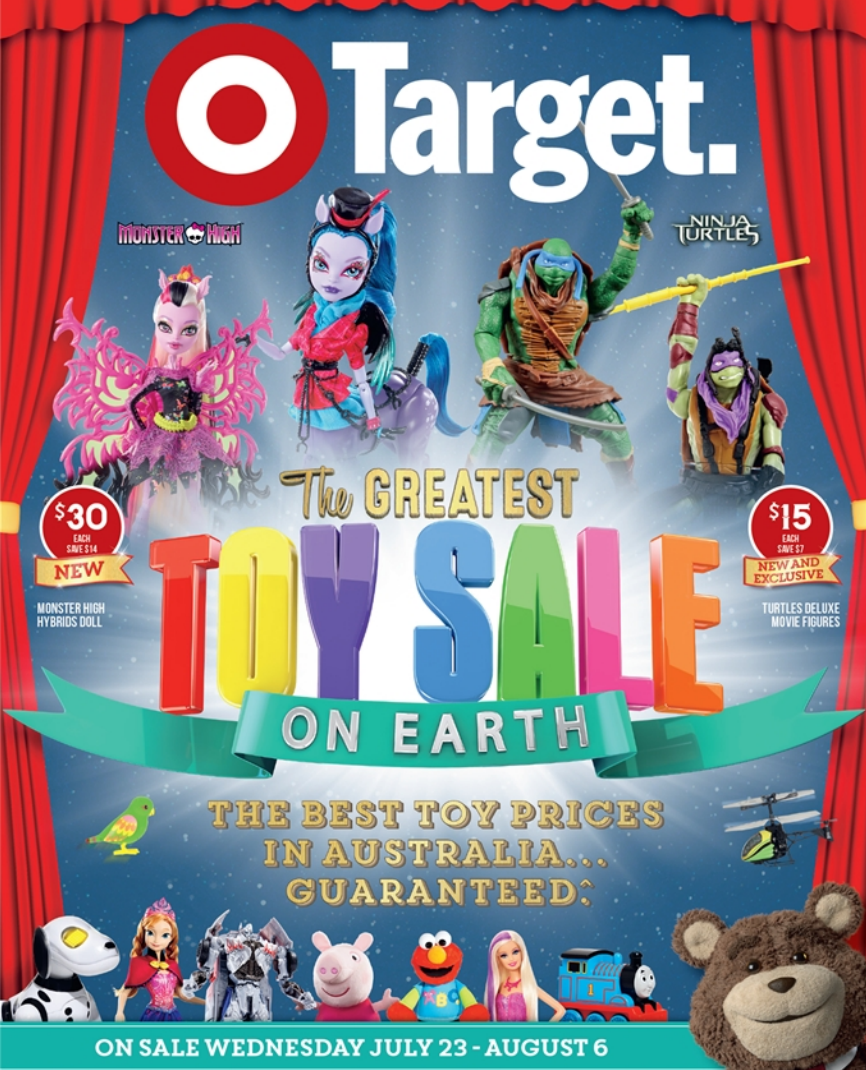 Target chose to play their Toy Sale card a little cleverer this year. Instead of slugging it out with every other retailer in June, when the Australian Toy Sale traditionally runs, Target decided to wait and let everyone else go first, launching their toy sale after the likes of Myer, Big W, Kmart, David Jones and Toys R Us concluded theirs.

It’s a little unorthodox, but their rationale is pretty clear – they didn’t want to compete against everyone else in a tightly contested space, but by waiting so long to launch, I’m concerned that most parents would’ve already put down Christmas laybys – it remains to be seen how well this sale is received. That said, LEGO sales are welcome all year round as there’s never a bad time to buy discounted LEGO!

Let’s cut to the chase, Target’s sale may qualify as the Greatest Toy Sale on Earth but when it comes to LEGO, it’s more like The Average LEGO Sale on Earth. 20% off LEGO is pretty normal in the grand scheme of things, but Target tries to make up with some pretty decent exclusives this time round. 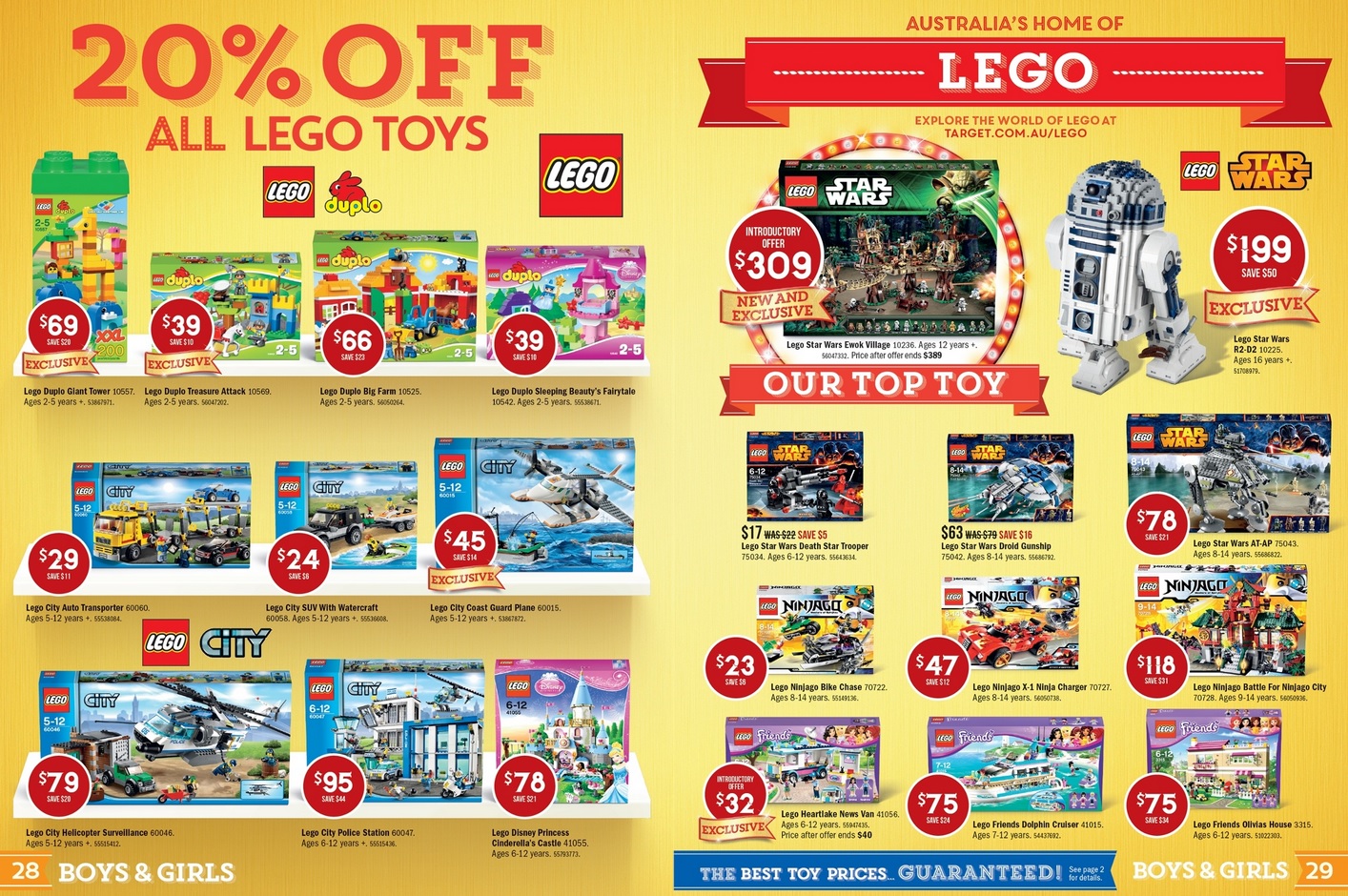 Overall, not a bad spread. 20% off discounts are easy to figure out since it’s a flat discount. The exclusives aren’t too bad either. I’m not that big a Star Wars fan so I’ll probably give the Ewok Village a miss, but R2-D2 is a fantastic set to build and display and at $200 packs a huge amount of value. I may pick up the Heartlake News Van since I like collecting Friends sets but I’m still mulling over it since it doesn’t seem like a “Must Buy” set. 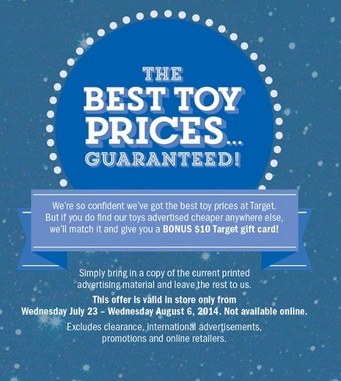 Curiously enough, Target are so confident with their low toy prices that they will price match any toy advertised elsewhere AND give you a bonus $10 Gift Card if you produce a printed copy of the advertising material. It remains to be seen whether anyone can take advantage of this, since the other retailers are wrapping up their Toy Sales by the time Target starts theirs, but if I find anything, I’ll be sure to update this post.

Target’s Toy Sale is already live online on their website and will begin in stores on Wednesday, 23 July 2014 till 6 August 2014. No idea if the new LEGO sets will be out by the time the sale ends but it would be nice if we could get 20% off the new wave of sets that are due to arrive in Australian toy stores sometime in August.

Toys R Us is also looking to clear some of their excess LEGO stock (possibly in anticipation of the new sets arriving in August), are having a Buy 1 Get 50% off your second LEGO Star Wars, Creator, Chima or Duplo set. That effectively means you can enjoy 25% off sets, provided you find 2 identically priced sets.

The great thing is that you can mix and match sets from these different themes, which from my observation are the ones that aren’t selling as well compared to the more popular themes like City, The LEGO Movie or Friends. Could be a good time to pick up Star Wars battle packs or Micro Fighters if you’re looking to build armies.

Not wanting Target to hog the entire Toy Sale spotlight in July, Myer has extended their June Toy Sale catalogue till 27 July. It’s great to have an alternative retailer to shop at for 20% off LEGO deals, although most of the big ticket items such as the Parisian Restaurant, MetalBeard’s Sea Cow and The Simpsons House have all sold out. I’ve written a lengthy round up of the Myer sale in my June 2014 Toy Sale post.

It’s still a great opportunity to pick up some older themes such as The Lord of the Rings or The Hobbit before they disappear off retail shelves forever. I think it’s a bit of a gamble, as I’m crossing my fingers that Myer puts these sets on clearance as they look to clear up their inventory for the upcoming new wave of sets in August and beyond.

That’s all the LEGO sales in Australia for the month of July. If you see anything else that I missed, please let me know in the comments and I’ll update this post!