It’s March and what better way to welcome Autumn than with a couple of awesome LEGO sales and deals! With the new March LEGO sets starting to show up across the country, these sales make it a great time to scratch your LEGO shopping itch. Unfortunately, we’re not getting a flat %-off sale, but it’s better than nothing! 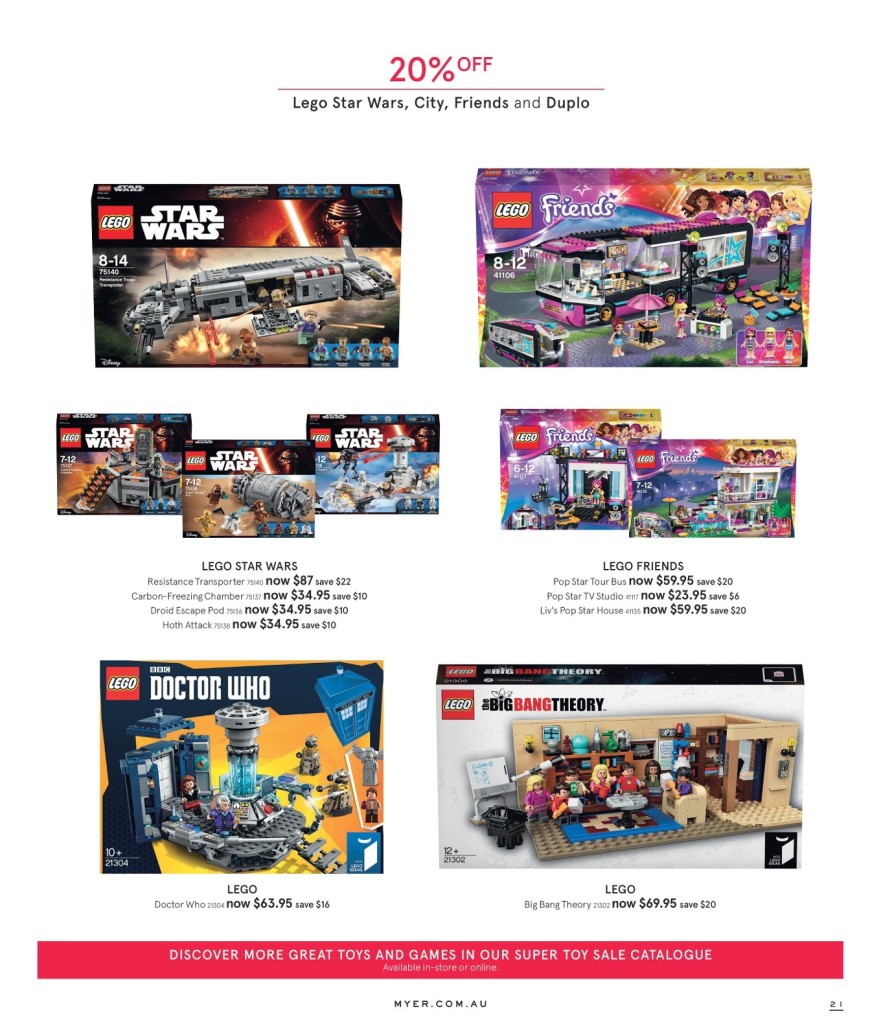 Myer have released not one but TWO catalogues filled with LEGO deals. It’s a little confusing since they both end at different dates, so I’ve broken split them up into two deals. 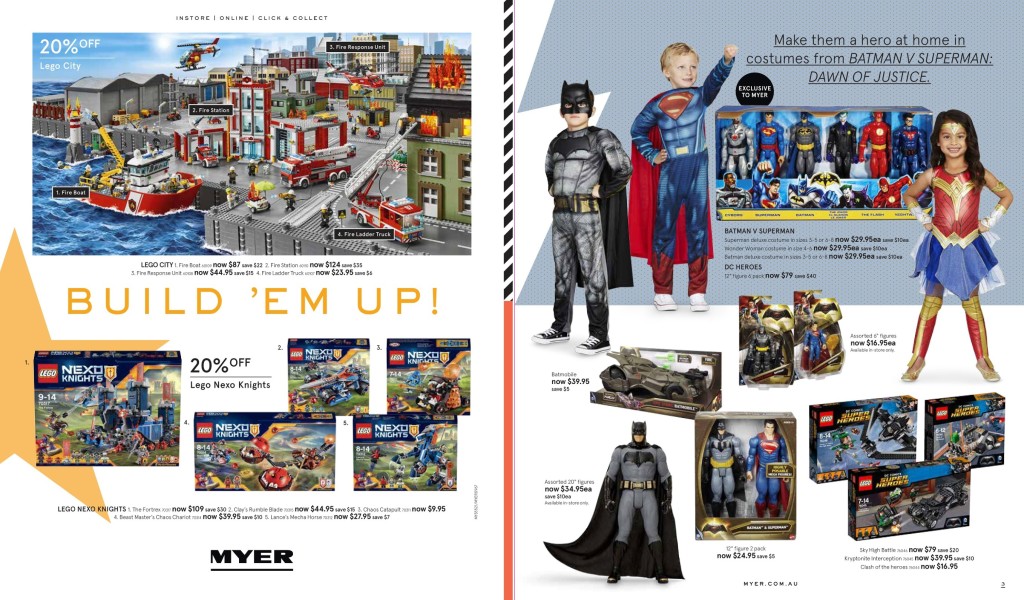 Myer also have a dedicated toy sale catalogue, with more LEGO sales. Not to be confused with their earlier catalogue, this one ends a whole week later on the 25th of April.

In this catalogue, Myer are having 20% off LEGO City and Nexo Knights. The LEGO City discount is pretty confusing since there’s an obvious overlap with the first catalogue. Eh?

In addition to Nexo Knights and City, the new Batman vs Superman sets are also discounted at 20%, except for the smallest set Clash of the Heroes (read my review here) which is only 15% off. Great time to get on the Batman vs Superman hype train as it opens in cinemas this week.

All in all, pretty good deals, although if you’re thinking of buying Nexo Knights sets, you’re better off shopping at Big W who have a much more appealing discount. That said, be sure to price match if you prefer shopping at Myer. 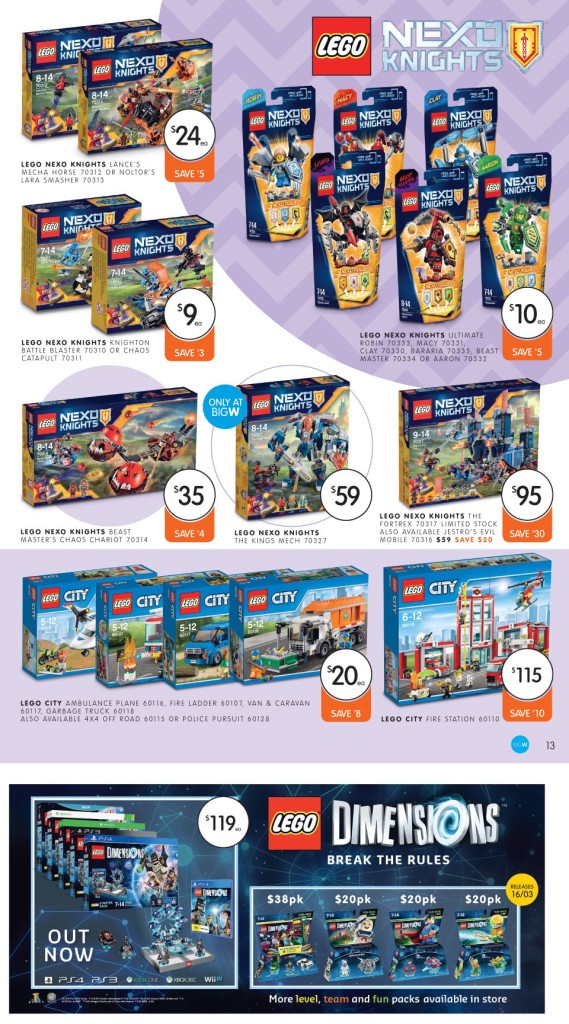 In the lead up to the Easter holiday, Big W has a catalogue stuffed with some pretty awesome Nexo Knights deals. It’s a great opportunity to pick up the Nexo Knights sets if you’ve been eyeing them as they’re over 30% off RRP – which probably won’t get beat unless they go on clearance. Also, we FINALLY get the King’s Mech on sale but unfortunately, it’s not discounted at all.

The Ultimate Sets at $10 are also pretty dope for parts.

Apart from that, Big W have the new LEGO Dimensions Fourth Wave sets for $38 (Midway Level Pack) and $20 (Fun Packs) if you’re into the game or minifigures. Great time to pick up the Stay Puft Marshmallow Man if you’re a Ghostbusters fan. 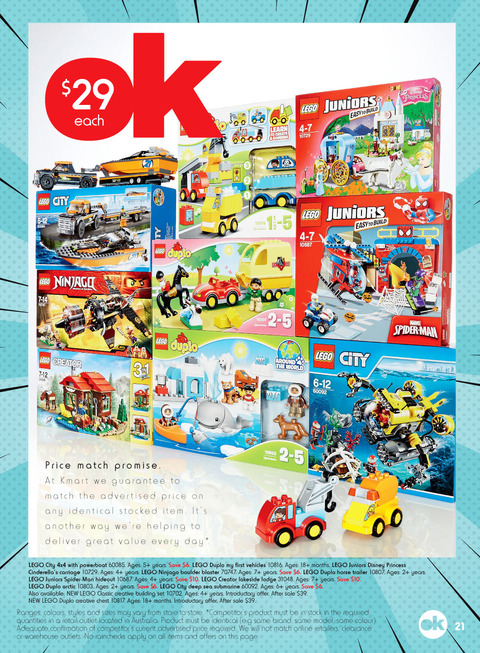 Kmart has one page of selected LEGO sets on sale in their pre-school holiday catalogue.

Nothing too outstanding here but they’ve made it pretty easy to process since all the sets featured are priced at a flat $29. It’s a motley crew of old and new sets, but honestly, there’s nothing too exciting here.

Here are the highlights: 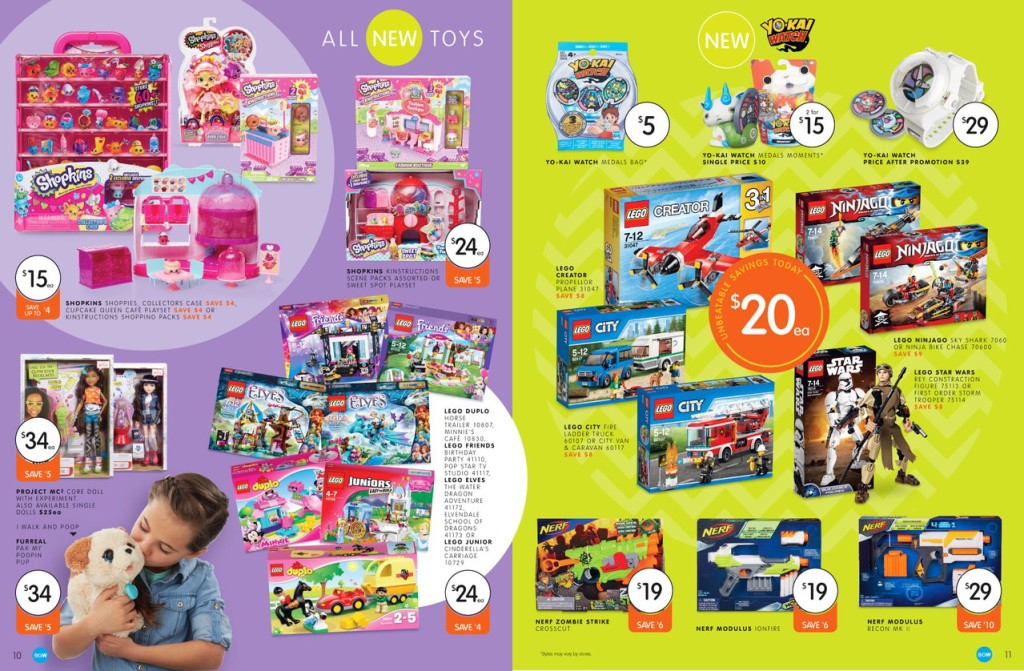 Big W have a catalogue out with some great deals off selected small sets from 10 – 17 March. The best part is that they’re mostly new sets, and should make some pretty great impulse buys for fans of Elves, Friends, Juniors, City, Ninjago and Star Wars.

As an added bonus, if you’re planning to shop at Big W, you can also take advantage of their 10% off Big W gift cards offer, giving you an extra 10% off the already reduced prices if you buy a gift card, checkout, then double back in for LEGO. Or you could save these for a rainy day/mid-year toy sale.

The most notable discounts in the catalogue are the 2 Ninjago sets at more than 40% off. They’re not the flashiest sets, but I quite like the Sky Shark and won’t be passing on it for that price. The buildable First Order Stormtrooper and Rey are also at a great price. I really like the Buildable Stormtrooper and have one at my work desk, which I pose around when I need to take a break from staring at my computer screen.

The City vehicles at $20 are also great, but they almost always tend to discount these small vehicle sets to $20 during big sales, so there’s probably no rush to pick them up if you have other priorities.

This is a really interesting turn of events. Toyworld have a new catalogue out with a few reductions on LEGO sets but by far the most interesting tidbit contained in the catalogue is that the Iconic Easter Minifigure set (5004468) is available as a free gift! 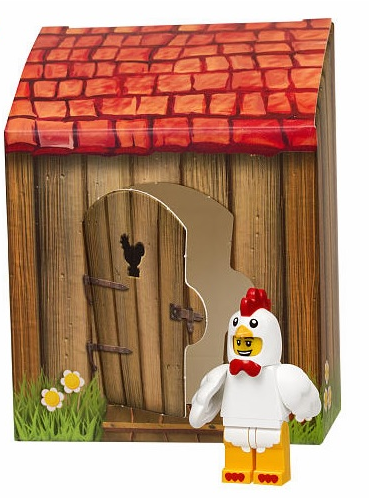 All you have to do is spend $50 on any LEGO product featured in the catalogue to receive the reissued Chicken Suit Guy for free. What’s the catch? There’s two. Firstly, not too many good deals in the catalogue. Second, the catalogue is only available at selected Toyworlds.

Here are some of the highlights in the catalogue:

Apart from The Fortrex and Fire Station, there aren’t too many standout deals, but hey, if you live in rural Australia and want a Chicken Suit Guy minifigure without having to spend $200 on LEGO.com to get free shipping, this is your best shot! 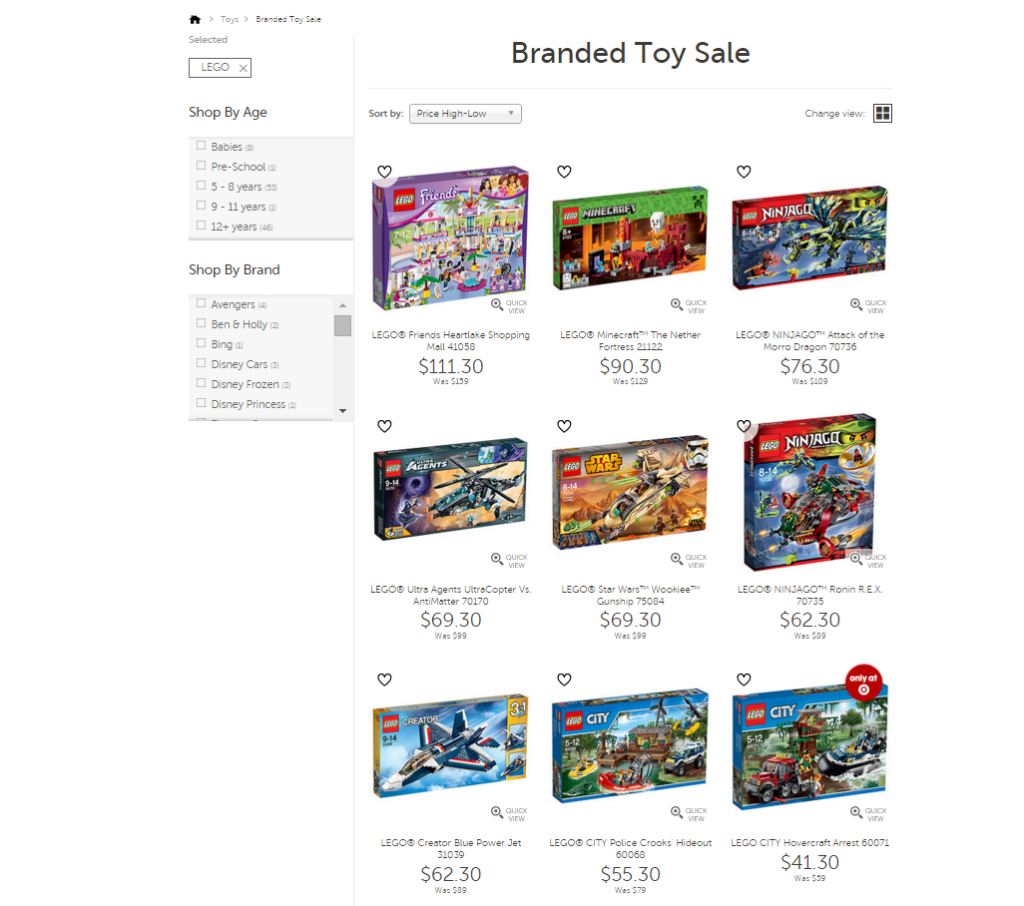 Big surprise from Target, with a 30% off selected LEGO sets sale that’s both online and in-store. Target is looking to clear out some of the older 2015 sets, so this is a great time to round out your collection if you missed out on any sets from last year. 30% is nothing to sneeze at and there are some fantastic deals here.

Do note that the selection of sets online is quite limited, and if you’re lucky enough to come across some discounted sets in-store, you should be able to score some really sweet deals. Take the UCS Tie Fighter for $209.30 or Brick Bounty for $97.30

Here are some of the highlights from the online sale. Check out the entire range here. If you find any cool deals in-store, I’d love to hear about it in the comments section! 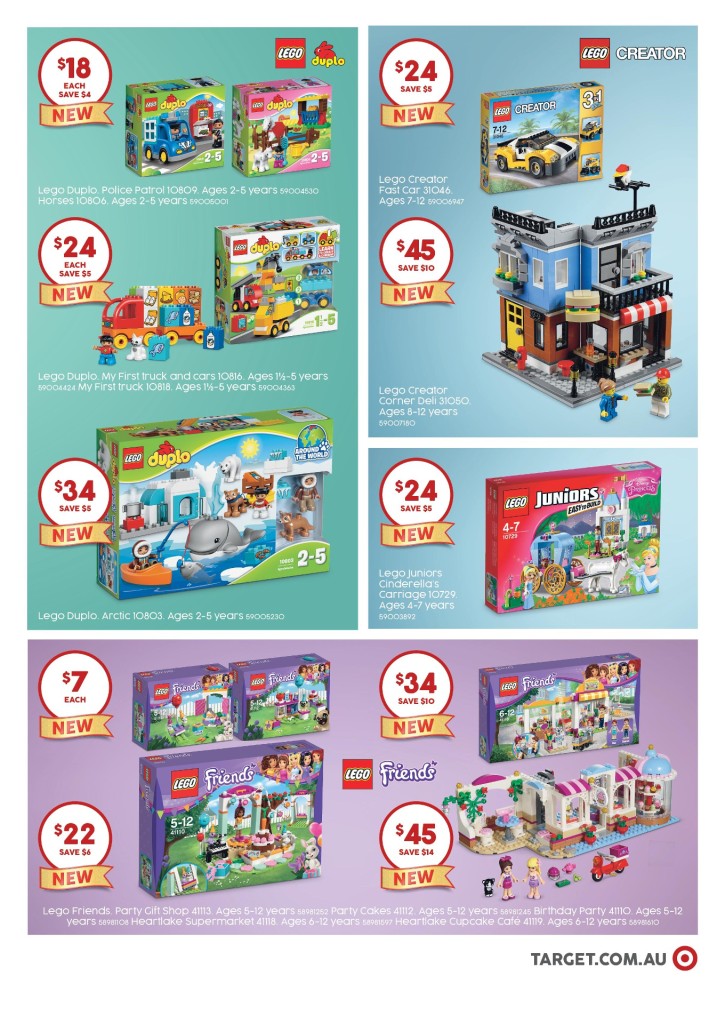 For fans who are considering 2016 sets, Target has small section in their catalogue devoted to some new sets – mostly Friends and Creator. Personally, I’m not a fan of these selected sets on sale business but there are some decent >20% off deals here, especially if you’re into Friends.

Here are the sets that are discounted more than 20% off their RRP.

If you’ve got money to splash and are planning to make a large number of purchases, Toys R Us Australia currently has the best deal with a Buy 1 Get 50% off your second toy. This promotion applies to Duplo, City, Technic, Ninjago, Friends and Star Wars.

The great thing about this sale is that all new 2016 LEGO sets are included as long as they fall within these themes, and if you plan your purchases right so that the items are the same price, you get to maximise your savings by enjoying up to 25% off each LEGO set.

Beggars can’t be choosers! I was a little bummed that Nexo Knights wasn’t included in this offer as it would’ve been a great opportunity to pick up some sets, especially the Ultimate sets.

That’s it for now, watch this space for more March 2016 Australian LEGO sales. If you spot any other deals, feel free to drop me an email or leave a comment so I can update this post!