UPDATE:  New items on sale from Big W, a sweet 20% off all LEGO catalogue from Target and a really awesome 25% sale from Toys R Us

If you’re like me, you’re also probably in denial that it is November. Yes, November – the 11th month of the year and the month before Christmas. Christmas! Where did 2014 go?

As we head towards the greatest gift buying season of the year at full speed, major Australian retailers Myer, Kmart, Toys R Us and Big W () have all launched Toy Sale catalogues with some juicy (and some not juicy) LEGO sales.

Like any other toy sale here in Australia, you don’t HAVE to shop at the respective retailers to get the deals that you want. To save you time going from store to store, just get your preferred local retailer to price match their competitors by pulling up the images of the catalogue pages in this post to help them verify the price. Trust me, this saves you a lot of time and effort.

All right, let’s get to the good bits – here’s all the details you need to know about November’s Christmas LEGO sales. 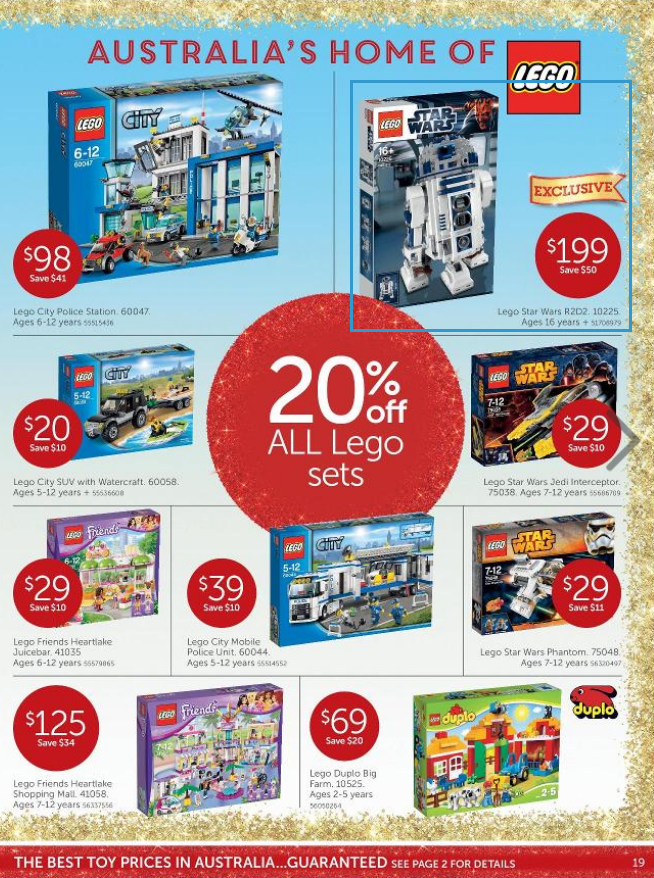 Target has dubbed themselves Australia’s home of LEGO in the lead up to Christmas. They do have an extremely sweet 20% of ALL LEGO sale, which is one of my favourite kinds of sales, so I’ll give them point for that. They’re one of the few retailers this season that has stuck to their guns and not gone down the route of discounting selected sets, so I’ll most likely be doing much of my shopping or impulse purchases at Target.

Highlights in the catalogue includes their sweet range of exclusives such as: 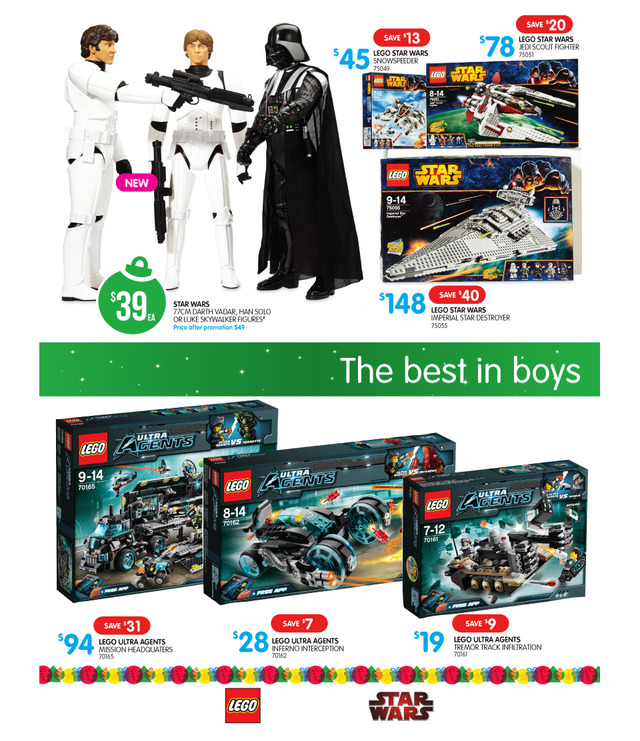 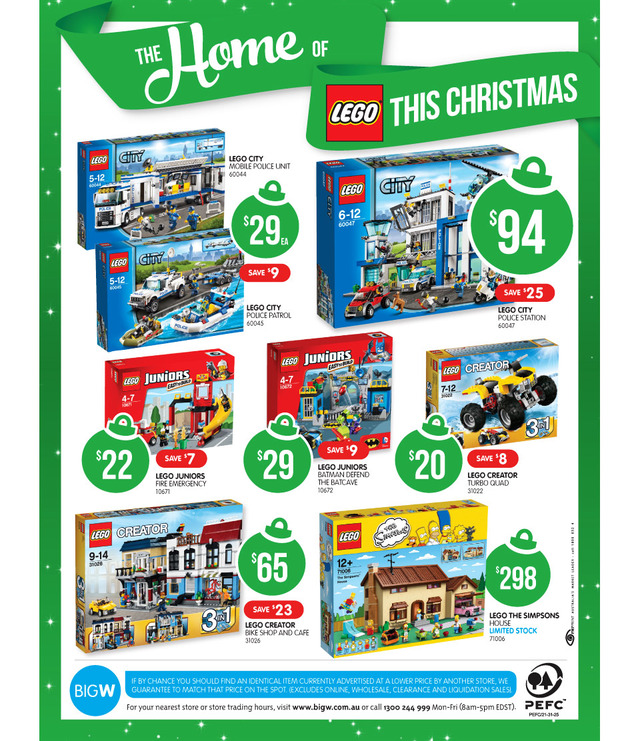 Big W have quite a small selection of LEGO on sale in their latest catalogue that goes live today. There aren’t many sets on offer, but the discounts are pretty good. Here are my top picks. Note that I’m using the set’s RRP, not Big W’s Every Day Low Prices, which are often just slightly lower than what it would cost everywhere else. 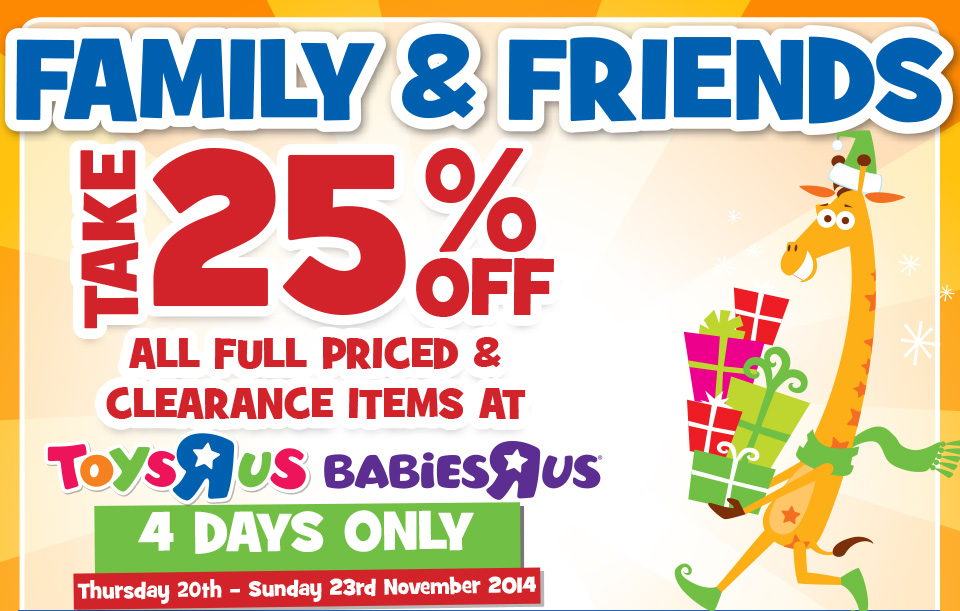 Toys R Us have a really great promotion, with 25% of all full prices and clearance prices, through the use of a coupon code.

All you have to do is scan this coupon at the checkout or use the online promo code 25OFF on their website to qualify for 25% off. It’s a great deal, considering Toys R Us have several great exclusives and hard to find items such as LEGO Architecture and Ideas sets. Here are some great items to use the coupon on at Toys R Us. Discounted price is after the coupon is applied.

If you haven’t bought yourself Brent Waller’s fantastic Ghostbusters set, this would be the best time to pick one up! 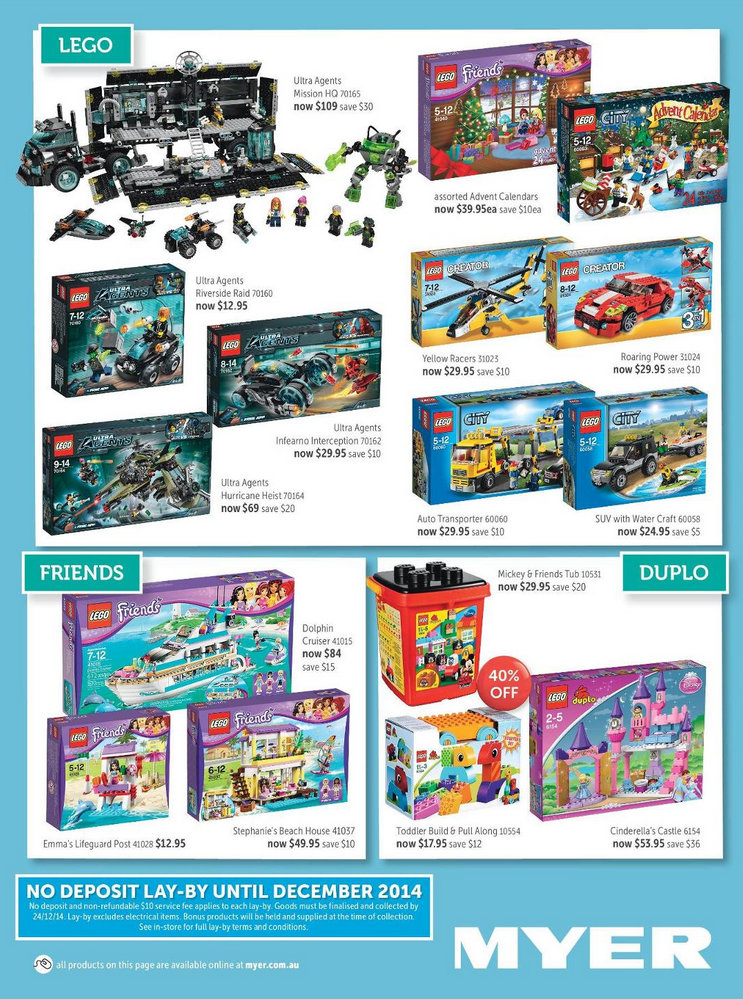 Myer has a selected LEGO sets from Ultra Agents, Friends, City and Creator on sale. Unlike previous Myer LEGO sales where we usually get a flat 20% off, they’ve gone in the direction of discounting selected sets which is a huge pain in the ass. My theory is that since LEGO is going to be the hottest toy this Christmas season, they figured that sets are going to fly off the shelves any without a 20% discount as an incentive.

There are some decent deals though – I’ve highlighted the notable deals by listing them down. I figured it wouldn’t be much beneficial for you to just get a snapshot of the better deals, instead of wade through a giant list.

I’ve picked up the Ultra Agents HQ myself as a little pre-Christmas treat. The Advent Calendars are also a particularly decent deal. They sell out pretty quickly, so be act fast if you want them – especially the City one.

Wait for a clearance on 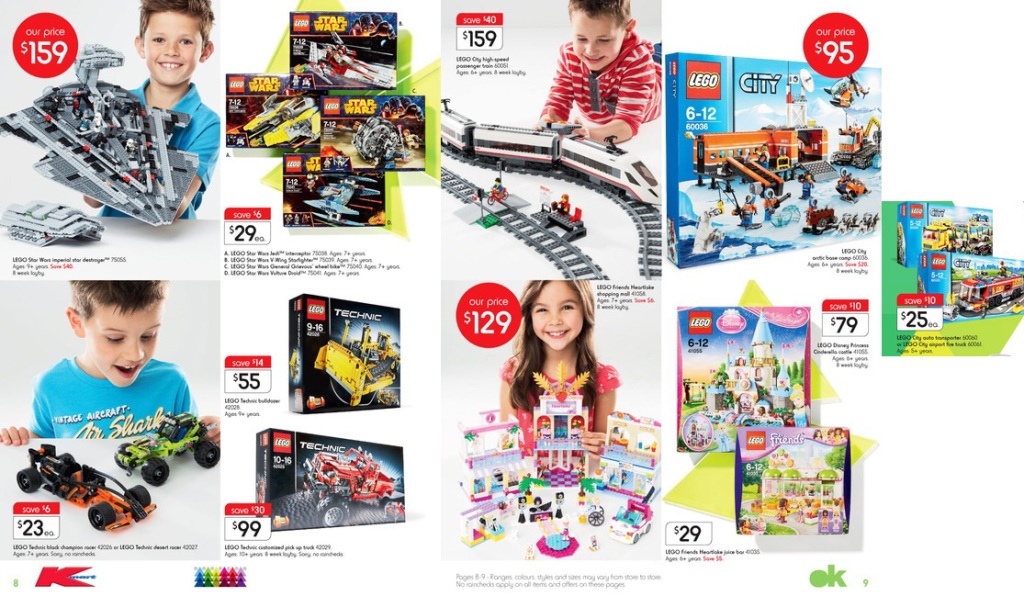 Kmart has a bunch of LEGO sets on sale for November as well. Don’t let the small number of LEGO sets on sale dissuade you, there are some pretty good deals in their catalogue. I’ve highlighted some of my top picks. For reference, RRP in the brackets are based on the sets’ actual RRP, not Kmart’s pricing which is sometimes below the RRP. 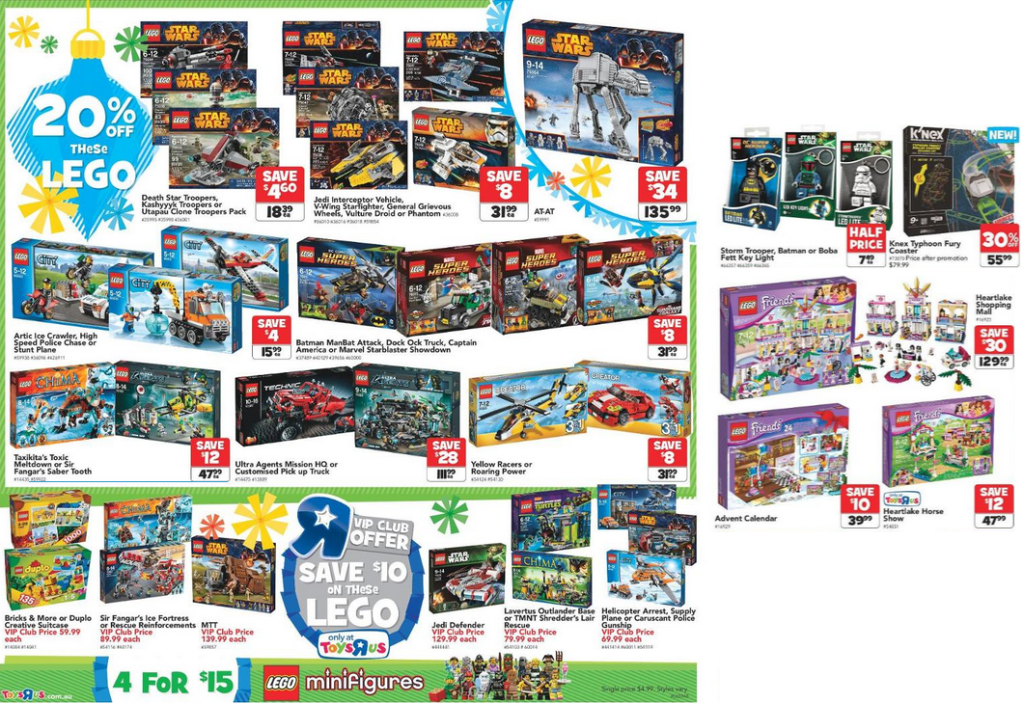 Toys R Us has a monster of a LEGO sale catalogue – every catalogue that they produce aims to outdo the previous in terms of number of sets they manage to squeeze on to a single page. Somebody needs to tell their catalogue person that simplicity and minimalism is key to presenting information.

Still, kudos to Toys R Us for giving us a pseudo 20% off sale – only a selected bunch of sets have been given the 20% off treatment. This is still relatively easy to navigate, so it isn’t too shabby. 20% off is the usual discount rate, so if any of the sets listed in the catalogue is one that you’re after, it would be a great time to pick them up.

To me, the highlight of the catalogue is the VIP Club (which is free to join) offer where you can get $10 off their range of exclusive LEGO sets. The only other way to get these sets would be to buy them at full price from LEGO.com so $10 off is a pretty decent deal. I’ve listed some of my top picks below.

There’s also an offer for the LEGO Minifigures. 4 blind bags for $15 is a pretty good deal, assuming that they have enough in stock. 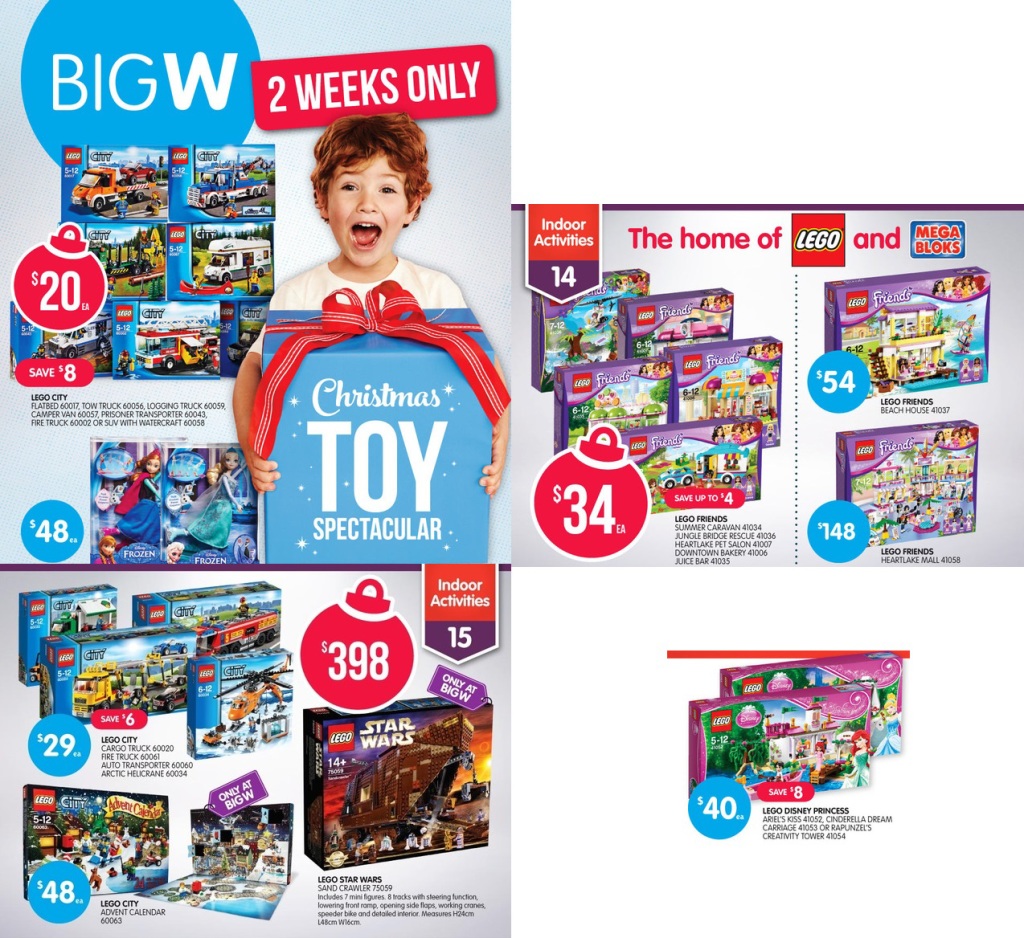 Big W has some pretty decent deals as well, especially if you’re into City sets or Friends. Of note is the Big W Exclusive, the Star Wars 75049 Sandcrawler which should make an epic stocking suffer for fans of the galaxy far, far away. RRP prices listed here are based on what they cost on LEGO.com, not using Big W’s everyday low prices.

I’d urge you to get to Big W fast to secure the Sandcrawler, as these UCS sets usually sell out pretty quickly. 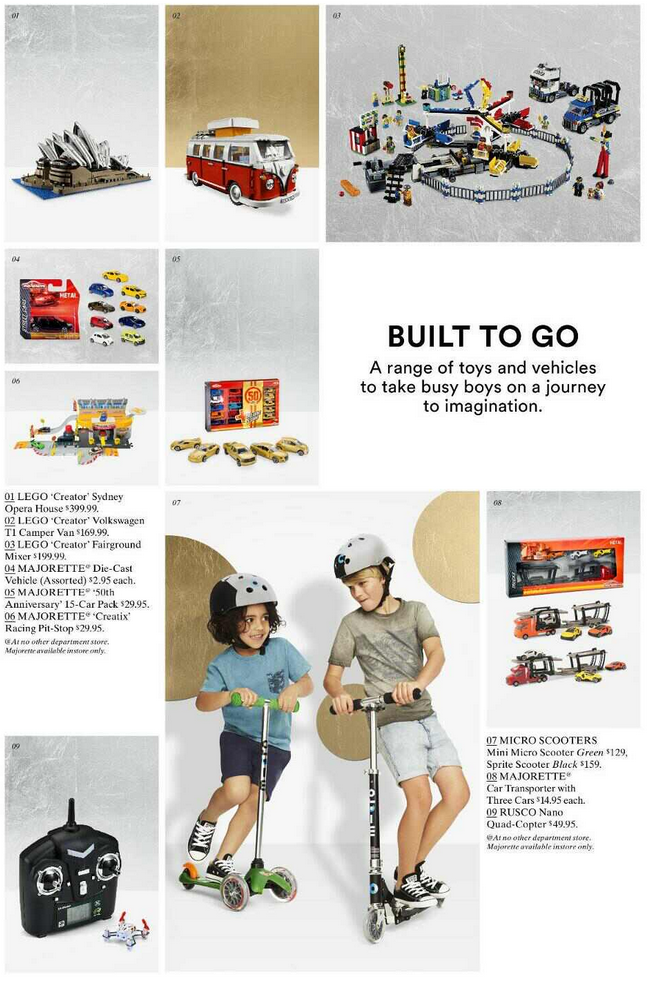 David Jones has an amazingly designed catalogue. Seriously, I really dig the vintage design cues and how everything is laid out. Very classy and very clean and minimalist. Unfortunately, it’s bereft of any sales – it’s simply used to show off some of the cool LEGO sets that are available at David Jones.

Of note is the Fairground Mixer, which seems to be exclusive to DJs for now. Another highlight is the fact that the Modular sets, Pet Shop and Town Hall are back on sale in-store as well as on their online store. A 20% off sale would be nice, but knowing David Jones, they’ll probably sneakily announce a LEGO sale whenever they feel like it. Still, if you fancy getting these sets at full price, here are the links to the Modulars and other big ticket LEGO sets at David Jones.