Can you believe that it’s September already! Time really does fly. It’s going to be Christmas in no time! 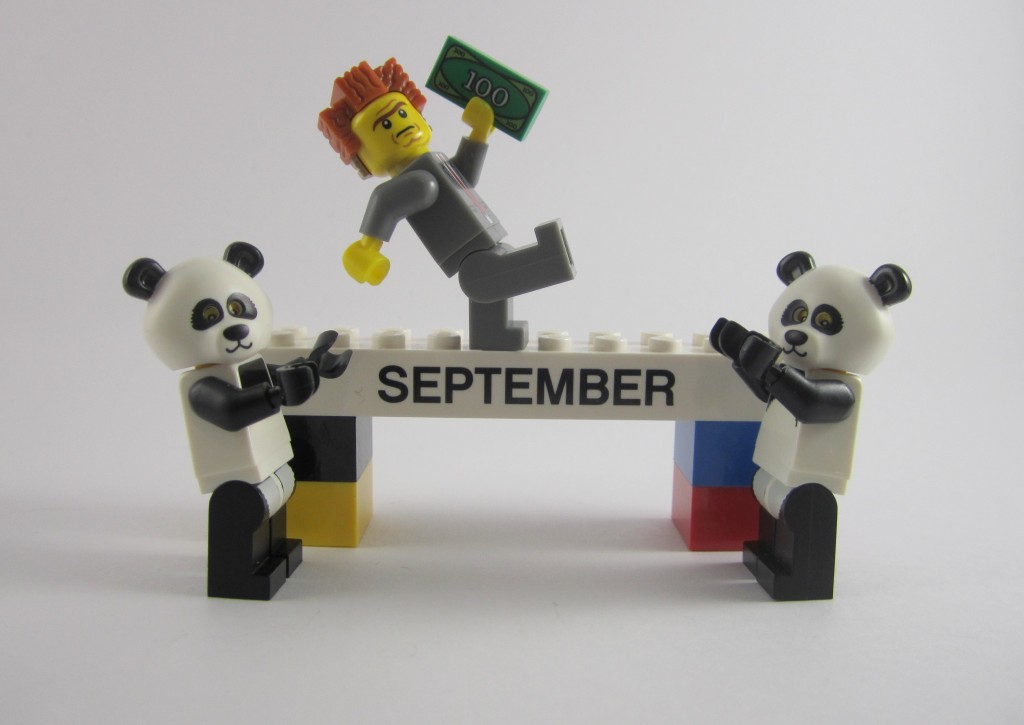 With another new month comes more LEGO sales, and with the new sets out in force in Australian toy stores, any excuse to buy LEGO at a discount is more than welcome!

UPDATE (17/9): In conjunction with the upcoming school holidays, major retailers like Myer, Kmart, Target and Big W have rolled out toy sale catalogues which I’m delighted to report has tons of LEGO sales. Without further ado, here’s the lowdown on where the best LEGO sales and deals can be found in September 2014.

Another thing to note is that LEGO Advent Calendars are starting to show up in stores, I believe I saw some at Target and Myer, so this would be the ideal time to get them in case they sell out. With LEGO’s popularity at its highest ever, you can never be too sure these days, so best grab one to avoid missing out.

As with all other toy sales, the fact that retailers all have their catalogues at the same time, for convenience sake, remember that you can always get your preferred local retailer to price match their competitors so that you don’t have to travel half way around town just to get the best deals. Just pull up the image of the catalogue for them to verify the price and you should get them to price match without a hitch. 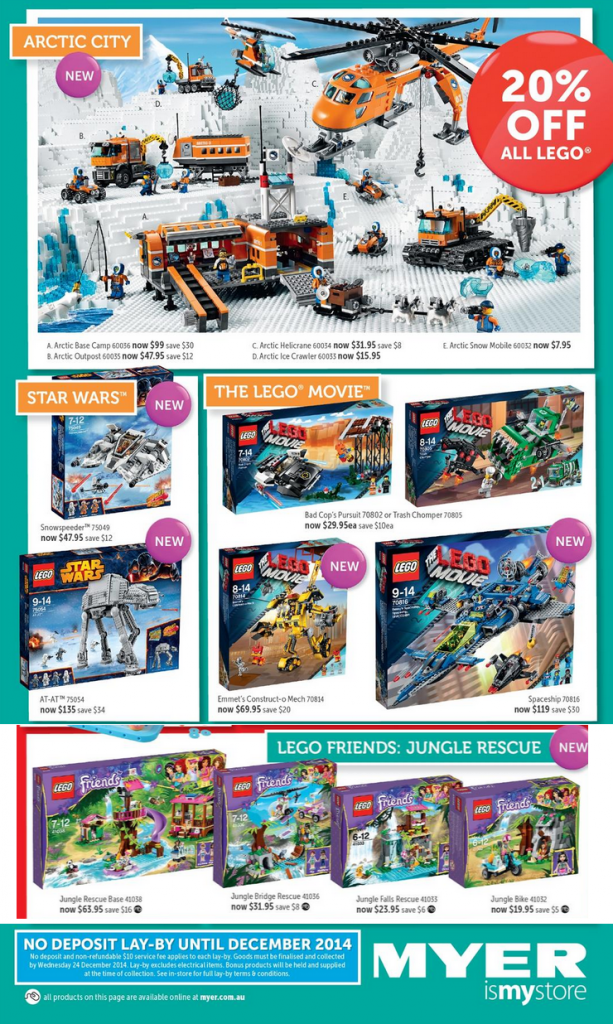 Myer has the best kind of LEGO sale, a nice flat 20% off LEGO with a couple of slightly better than 20% deals sprinkled about the catalogue, like 70802 Bad Cop Pursuit and 70805 Trash Chomper which are $30 each (original price $40). 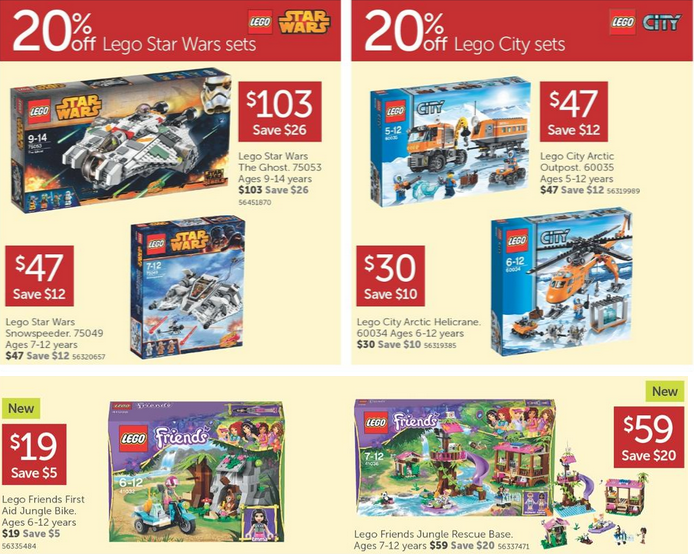 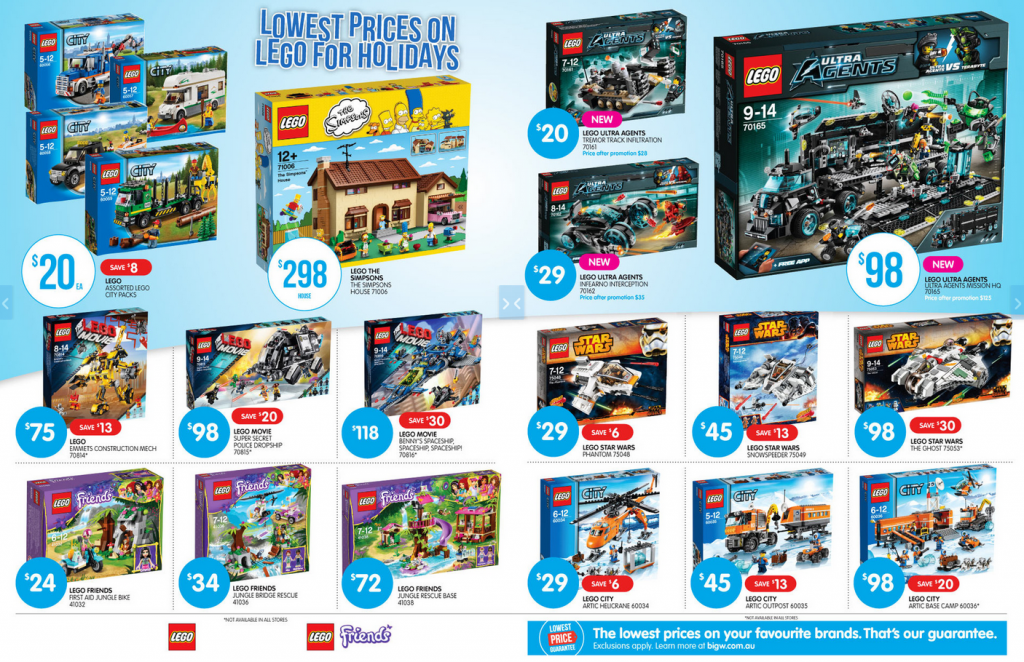 Big W in keeping with their traditional LEGO sales has once again opted to discount selective sets from a range of different themes. Big W already sells LEGO at slightly discounted prices on a daily basis so the extra discounts on top of their “lowest prices everyday” is a nice little bonus. Here’s a list of what’s on sale at Big W in September. *RRP is based on regular Big W Prices

Kmart like Big W has also gone down the road of discounting selected sets and featuring other non-discounted sets in a massive 4-page spread in their catalogue. Here are the deals. I won’t list down the sets that aren’t discounted for obvious reasons. 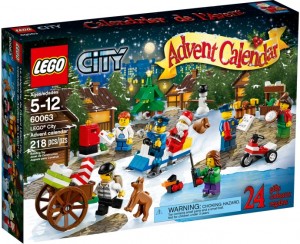 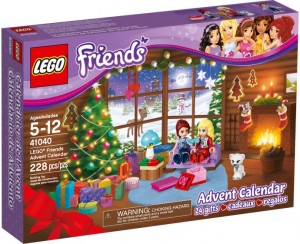 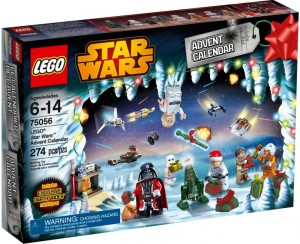 This isn’t a sale per se but this year’s LEGO Advent Calendars have gone up on sale on LEGO.com. The Australian prices for the 2014 Advent Calendars are the same as previous year, with each calendar costing AU$50. Not too shabby.

Here are the LEGO.com links in case you wanted to get the jump on the advent calendars.

UPDATE: The only Australian retailer that seems to be carrying the Star Wars Advent Calendar is Toyworld. Check your local Toyworld to see if they have any.

No idea on when the Advent Calendars will show up in stores but it shouldn’t be too long now. 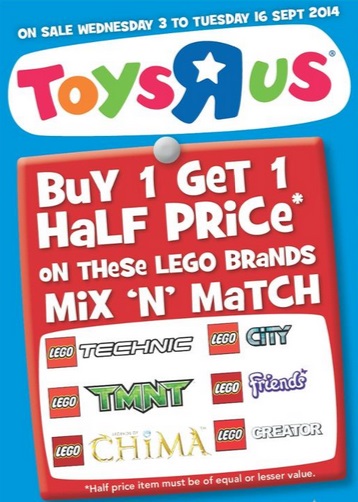 Toys R Us Australia is kind enough to kick off September with a Buy 1 Get 1 50% off sale which applies to Technic, Teenage Mutant Ninja Turtles, Chima, City, Friends and Creator – so pretty much all themes except for The LEGO Movie and Star Wars.

If you can find two sets at the same price, that’s a cool 25% off. Not too shabby indeed given the large range of eligible sets.

That’s a great way to kick off September – now to see if the other guys follow suite and start discounting LEGO.

« An interview with Dr. Ellen Kooijman, designer of the LEGO Research Institute
Busy as a bee at the Tesselaar Tulip Festival »