UPDATE: Myer has just kicked off their Toy Sale. For all the retailer toy sale deals, check out my dedicated Toy Sale 2015 post.

Welcome to June, which can only mean one thing – the Australian mid-year toy sale 2015 edition!

With the sales starting very very soon, I’m going to be compiling a list of known retailer exclusives and big ticket items such as the Creator Expert Modular buildings, to help you determine who has what and for how much.

As of right now, only the Myer and Toyworld exclusives have been made public. David Jones, and Toys ‘R’ Us haven’t released their catalogues yet, so we’ll just have to wait and see.

Last year’s big ticket sets such as the 10236 Ewok Village,  and maybe the Creator Expert 10218 Pet Shop should also show up again.

Traditionally, David Jones has carried most of the Modular Creator Expert buildings so keep an eye out if they emerge. 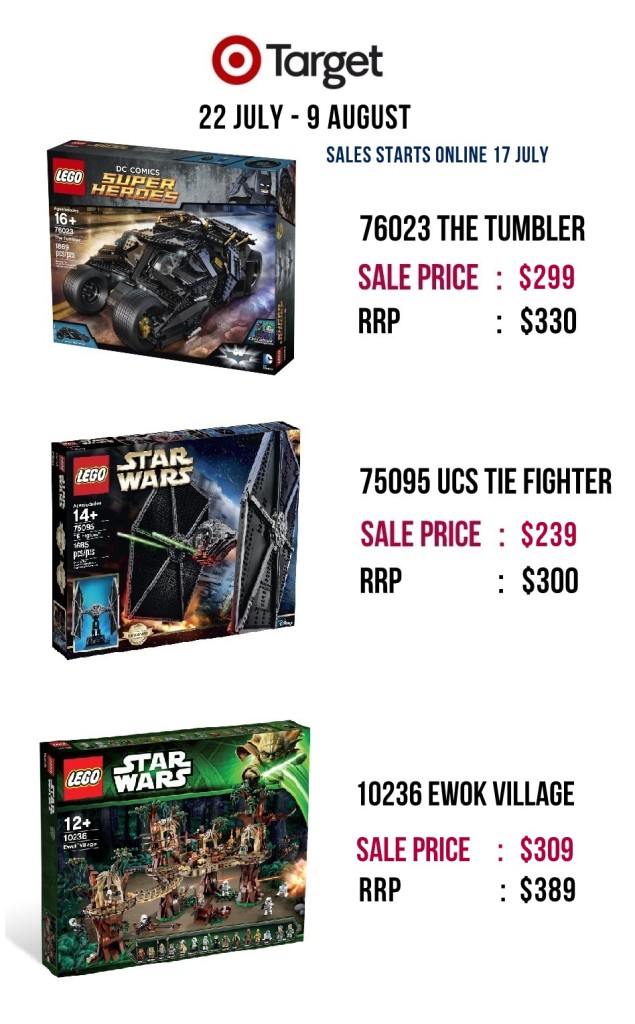 Target have showed their hand and their 2015 Toy Sale catalogue and it’s a little underwhelming. As expected the UCS Tie Fighter is priced at a very respectable $239 (20% off) and we also see the return of the Ewok Village at $309.

Most disappointingly, The Tumbler is only discounted by about 10% and will cost you $299 when their sale goes live on 17 July (online) or 22 July (instore). I was expected a flat 20% off all LEGO sale, but we’re only going to get 20% off City and Star Wars. 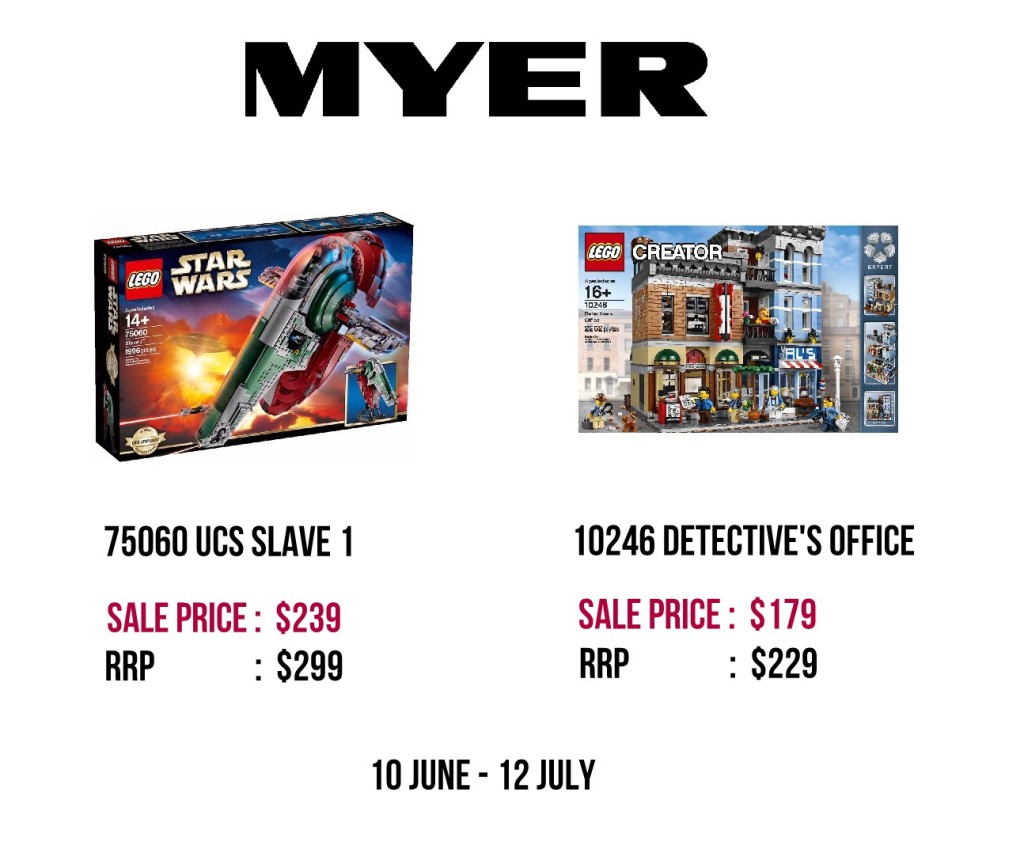 Myer is the first out the gates with the 75060 Ultimate Collector’s Series Slave 1 and Creator Expert 10246 Detective’s Office as their flagship exclusives. Myer’s Toy sale catalogue kicks off from 10 June till 12 July, but you can already purchase these sets on the Myer website albeit at RRP prices.

Apart from these Myer exclusives, they’re also stocking other big ticket sets such as the 10242 Mini Cooper, 10220 Volkswagen T1 Camper Van and 10232 Palace Cinema. Not sure if the Parisian Restaurant will show up at Myer Stores this year, but I’ll keep an eye out if I come across any. 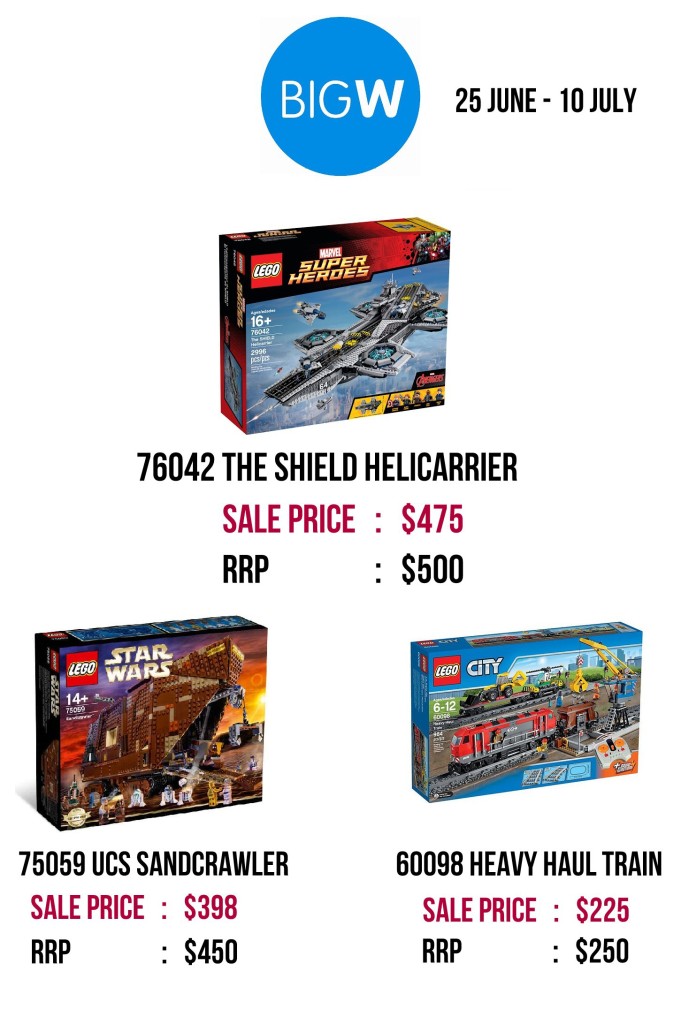 Thanks to users on OZLUG and Bricking Around, the Big W 2015 toy sale catalogue has been leaked onto the internet with juicy information on their exclusives. Big W (true to their namesake) has scored one of the biggest exclusives this year, 76042 The SHIELD Helicarrier priced at $475 – a decent enough discount of its ridiculous RRP of $500.

Big W’s 2015 Toy Sale catalogue runs from 25 June till 10 July! Although the sale hasn’t started as of yet, I’ve spotted the Sandcrawler in Big W stores, so it shouldn’t take long for The SHIELD Helicarrier to show up too. 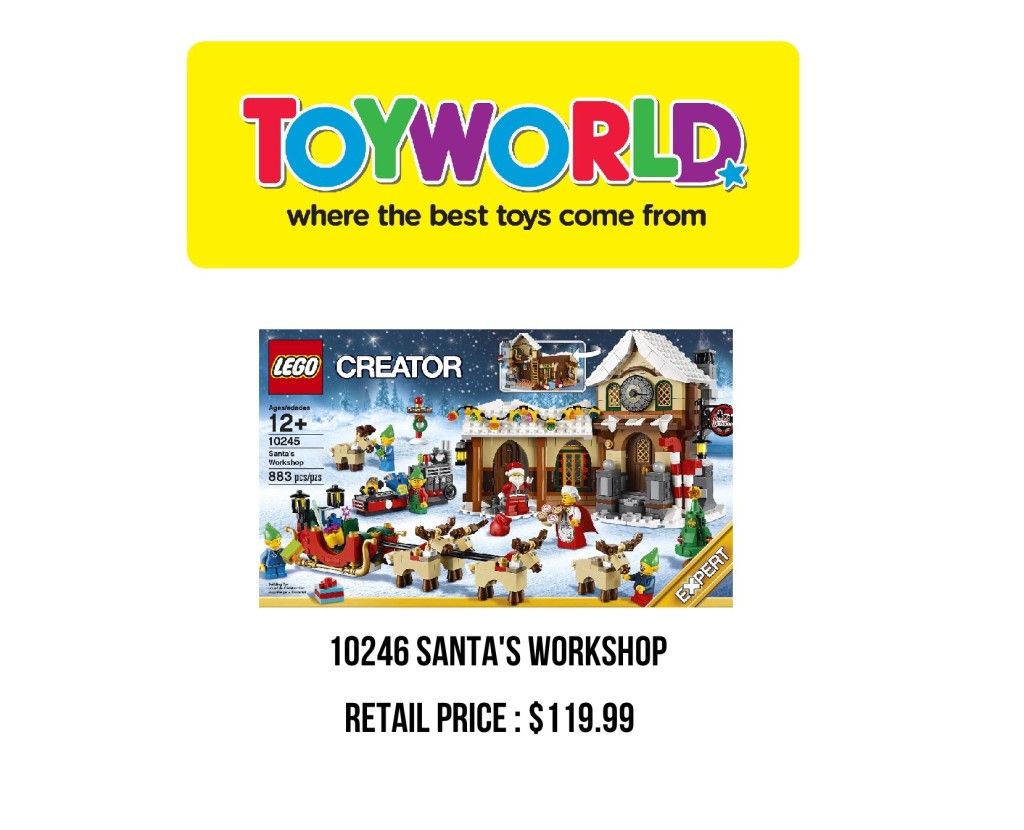 Toyworld has LEGO 10246 Creator Santa’s Workshop as their catalogue exclusive for $119.99. Not sure if they’ll discount it as that’s usually the prerogative of individual Toyworld stores so your mileage may vary. Curiously, the Santa’s Workshop has been retired on the Australian LEGO.com store and is listed as temporarily Out of Stock in the US.

This may be your very last chance to pick one up before the latest Winter Village set is gone forever. If you want to know what I though of it, be sure to read my review of 10246 Santa’s Workshop.

You can also find the 10243 Creator Expert Parisian Restaurant on Toyworld shelves for the RRP of $250.

No official news out of David Jones out of their toy sale catalogue yet, but their 2014 exclusive 10244 Creator Fairground Mixer is now up on their online store. I suspect the set is exclusive to them again as I haven’t heard wind that other stores will stock it.

I’m personally hoping for them to also stock the 10232 Creator Expert Palace Cinema as well.

That’s all the information for now. Bookmark and watch this space as more news is unconvered!