The LEGO Research Institute set has attracted a fair amount of media attention that it’s almost impossible for most people to have avoided articles for, against or grumbling about the availability of the set. Everyone, from the New York Times to the BBC has weighed in on the 8th LEGO Ideas set, the brainchild of Dutch Geoscientist, Dr. Ellen Kooijman and the LEGO Ideas team. 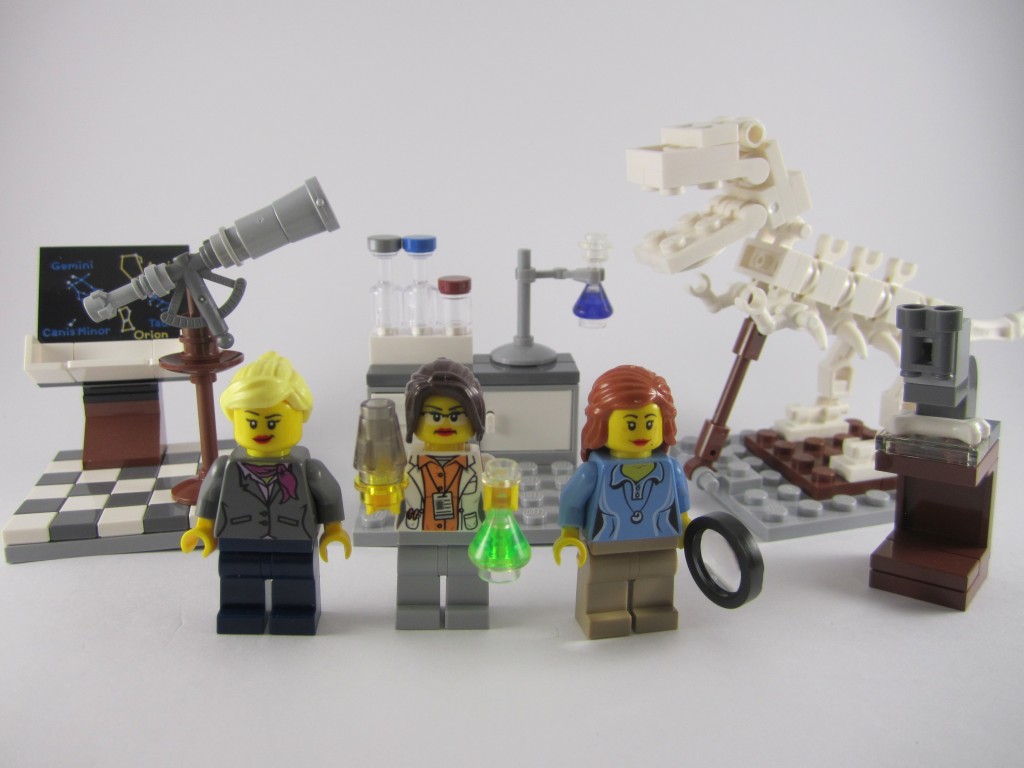 Amid the raucous and almost deafening rumbling of (seemingly unending) commentators on this innocuous set, I wanted to find out a little bit more about the brains behind the set and sent Dr. Ellen an email shortly after building the Research Institute (which I enjoyed immensely) to see if she’d be willing to do a short interview over email. I was extremely delighted when she agreed and even mentioned that she had read my blog previously (insert fanboy emotion here) – something that really meant a lot to me as a writer!

To keep up to date with her LEGO Ideas projects, be sure to follow her on LEGO Ideas. Not one to rest on her laurels, she already has another project in review (Big Bang Theory) and a Mega-Man one that needs about 5,600 more votes to achieve 10,000 supporters.

I’ve been a huge fan of the LEGO Ideas concept which allows normal LEGO fans a shot at having their creations made into real LEGO sets and it’s always been my dream to profile the people behind the Ideas. The last interview I did with an Ideas alumni was Brent Waller, designer of the LEGO Ghostbusters set.

For this interview, I’m really honoured to be able to pick Ellen’s brain about the Research Institute set, her love of LEGO and Science as well as what other LEGO creations and projects are on the horizon for the Sweden-based scientist. Huge shoutout to Ellen for taking the time to chat with me over email!

From my conversations with her and her responses below, it was immediately apparent that Ellen is a huge LEGO fan – she pretty much radiated passion and enthusiasm for LEGO and I’m really glad that she’s found success and had her name attributed to a LEGO set – the ultimate honour for any LEGO fan! 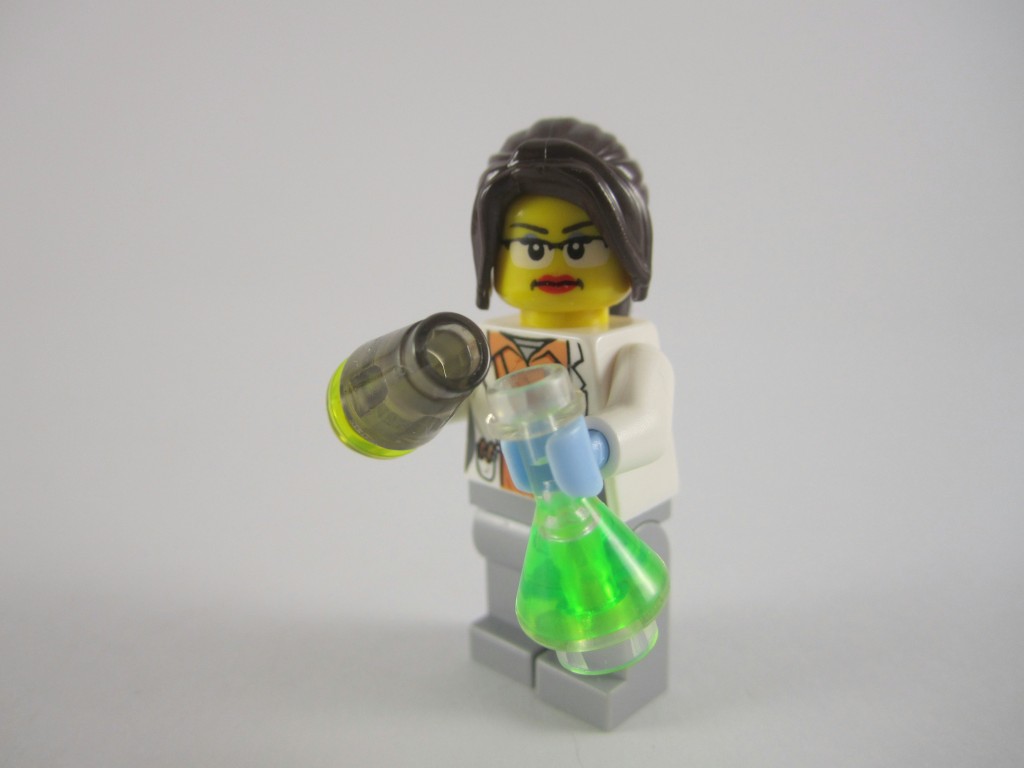 Chemist minifigure from the Research Institute, loosely based on Dr. Kooijman.

Hi Ellen, thanks for taking the time to speak to me. It’s been about a month since the Research Institute has been on sale. How do you feel about how well received the set has been and the fact that it sold out almost immediately online?

I am absolutely thrilled that the set turned out to be so popular. Considering the enormous worldwide hype already before the release it was not such a big surprise to me. I have mixed feelings about the fact it sold out so quickly though. TLG never told me how many sets they produced, but naturally my intention and hope was that as many children as possible would get the chance to play with this set and I have the feeling only few actually got that chance now.

I think this is really the kind of set that should be on shelves in every LEGO retailer in the world so that people who are not so active on the internet can find it too. Limiting availability to LEGO Stores is also too bad, because neither my home country (the Netherlands) nor my country of residence (Sweden) have brand stores leaving online ordering as the only way to get a set. Of course, this is all inherent to the LEGO Ideas concept and I knew this from the beginning, but now the set has become so popular I have the feeling this is a missed opportunity. 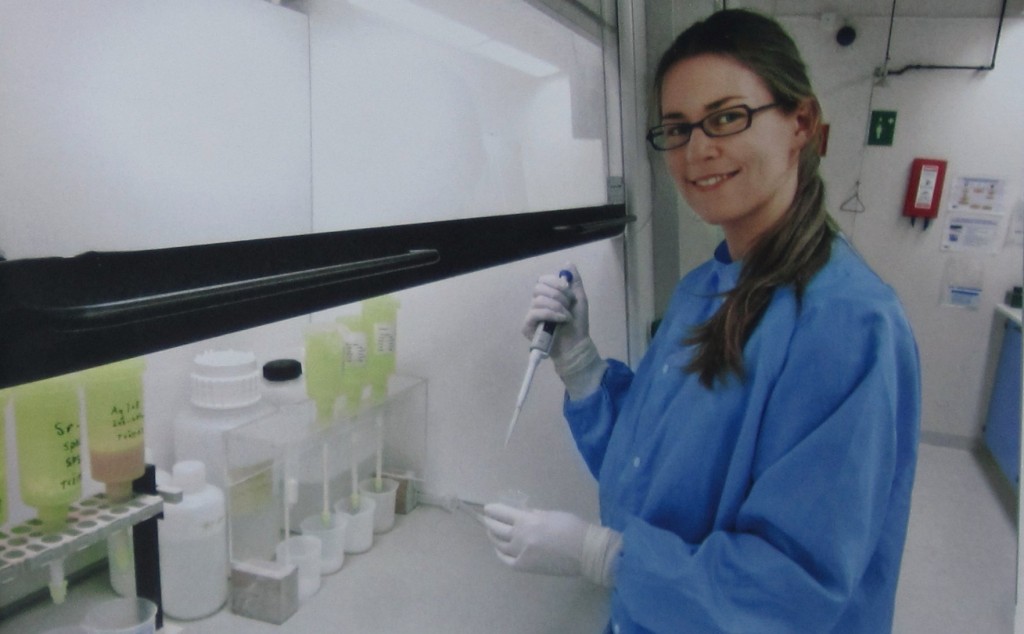 Can you tell me a little more about what your job as a Geoscientist entails?

I am a Senior Researcher at the Department of Geosciences of the Swedish Museum of Natural History and Head of a national laboratory for micro-analysis in geosciences. My research is in the fields of geochemistry, metamorphic petrology and tectonics. I use trace elements and isotopes in accessory minerals to understand continental crust formation and the tectonics of mountain belts.

Apart from spending time in the laboratory I travel the world to speak at conferences, give presentations at research institutes and do field research in remote areas. It’s a very diverse job!

Were you always interested in science or did you somehow accidentally ended up in your current profession?

I think I was always destined to become a scientist. I’ve been interested in the natural sciences since I was a young child and I remember especially being fascinated by astronomy at that time. My favourite school subjects were mathematics and physics and when I was 18 I visited universities to find out about these studies.

By chance I happened upon geoscience, which is not a very common field of study in the Netherlands (there are no mountains and hardly any rocks…) I was immediately enthusiastic about the prospect of combining physics, mathematics and chemistry to try and understand the Earth so I chose to pursue that. 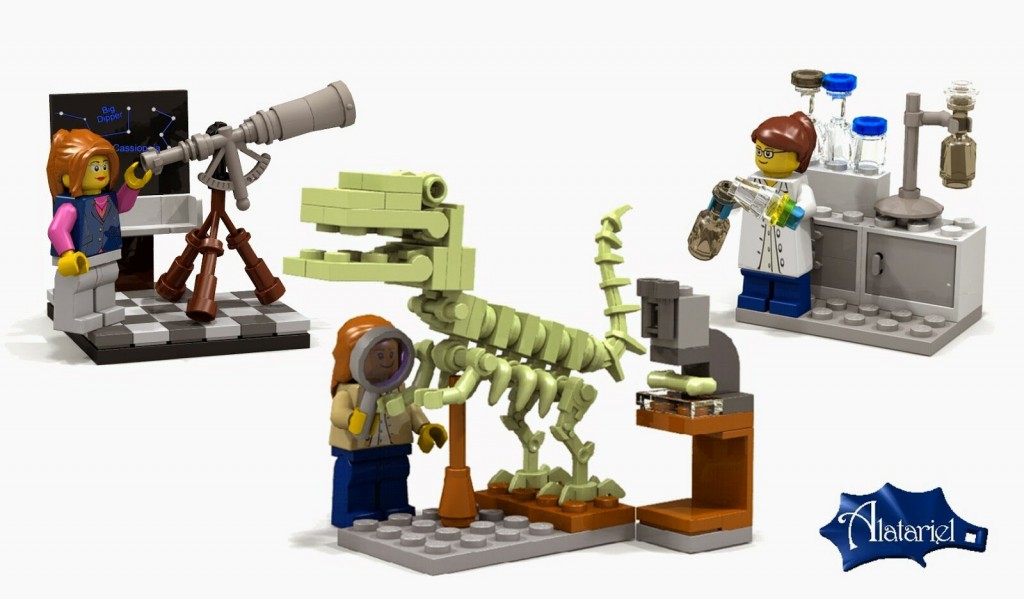 The original prototype that led to the Research Institute.

Tell us a little bit about the design of the Research Institute. Did you go through a lot of revisions before arriving at the final model?

The design of Research Institute was really a learning process for me. The original project ‘Female Minifigure Set’ was the very first project I ever shared online so it was a new experience for me to get comments and suggestions from lots of people. Part of the process was also learning to work with the software better, because all designing was done digitally.

Once I got the hang of that I could present the different vignettes in a much better way. I designed 13 vignettes in total and when the project started to approach 10k I organised a voting to determine which ones were most popular. The final selection was based on the results of that and I proposed that it could represent a ‘Research Institute’. I think it’s really cool that TLG (The LEGO Group) decided to use this as a name for the set.

What was it like working with the LEGO Ideas team?

When my project entered the LEGO Ideas review stage I sent them all my designs (Lego Digital Designer files). A LEGO designer worked with the designs and made changes to make the set fit their quality requirements. I think some changes were made due to parts availability. We had Skype video meetings during which they showed me the changes they made and discussed whether I was ok with that. It was important to them I approved of the modifications. It has been a very efficient and nice collaboration.

In the end I was invited to the headquarters in Billund where I got to meet the team involved in creating this set including the designer Steen Sig Andersen. For a huge LEGO fan this was of course an amazing experience! 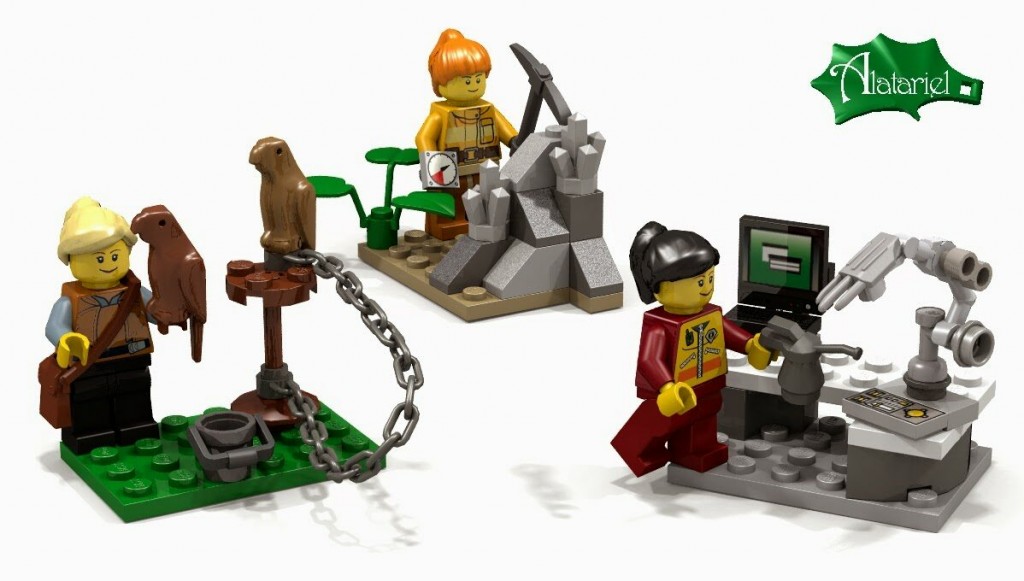 Some of Ellen’s other proposed vignettes – Falconer, Geologist, Robotics Engineer

If LEGO were to approach you to help design a sequel to the Research Institute, which 3 fields of science would you like to tackle next?

Ha, that’s a fun question. In fact, I have already designed such a potential follow-up set, but I have not talked with TLG about it yet. As such, I would prefer not to say, sorry 🙂

As a scientist, are you allowed to display LEGO in your workspace? If yes, can you let me know what models, sets or creations do you have at work?

Luckily, we are allowed to have LEGO in the workspace so naturally right now I have the Research Institute sitting on my desk. As soon as I got the set (already 6 weeks before official release) I took it to work and my colleagues and I had a fun coffee break playing with the set. Before I got this set I had another lab vignette sitting on my desk, based on my own lab, with a minifigure similar to my Alatariel avatar. 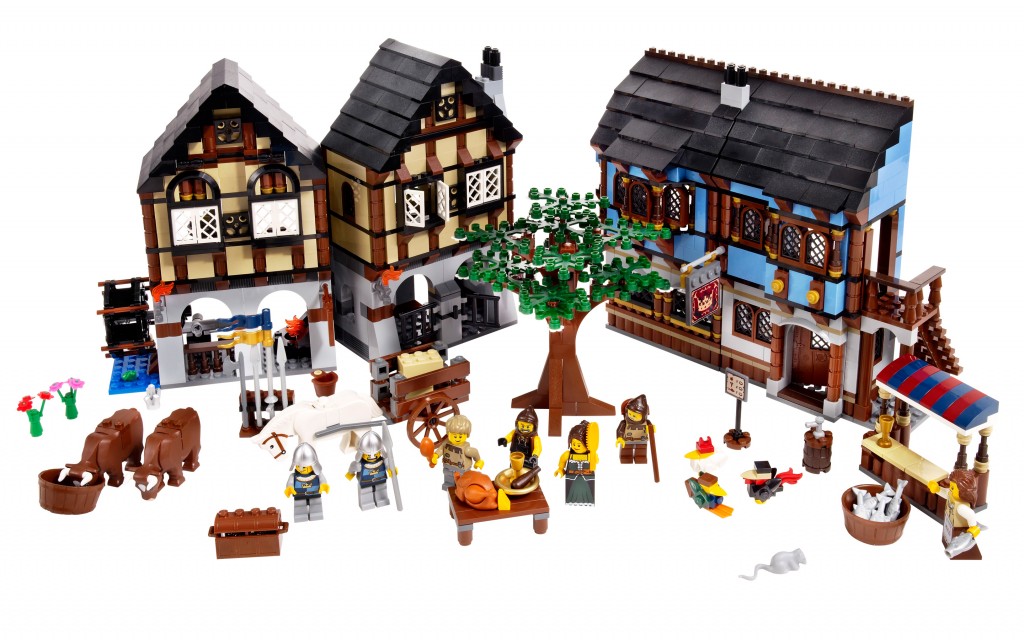 What is your favourite LEGO theme or set of all time?

My favorite themes are Castle or Kingdoms and Harry Potter (also a lot of ‘castle’). I think my favorite set to date is Medieval Market Village. I clearly remember first seeing that set in a catalogue and almost exploding with excitement.

What advice do you have for budding creators and builders looking to achieve success on LEGO Ideas?

First of all, it’s important to listen to comments from people. These can help you further improve the project. It’s also important to be persistent when it comes to advertising a project. You can send lots of tweets of posts on Facebook without result, but only one of them has to land with the right person and this can catalyse into enormous exposure. It also helped me a lot to be very active on Ideas by supporting other projects and commenting. It is quite a large community and if you are a ‘visible’ user you get more exposure.

Lastly, do you have any words of encouragement for younger kids who would like to explore a career in science?

If you have a curious mind and would like to understand how the world around you works, science is the best! Every day is different and we collectively take small steps towards better understanding our fascinating universe.

The LEGO Research Institute is sold out for now online, but you can always try keeping an eye on the product page on LEGO’s online store to see when it comes back in stock. If you’re lucky enough to have a LEGO store in your country, you can try your luck there. You can also find my review of the set here.

Special thanks to Dr. Ellen Kooijman for taking the time to do this interview and for granting permission to use images from her blog!