All great discoveries have a certain degree of serendipity to them. It all began before I had started working, when I just moved to Warragul when I encountered the most peculiar vehicle – An SUV decked out with LEGO minifigure decals parked near my home. 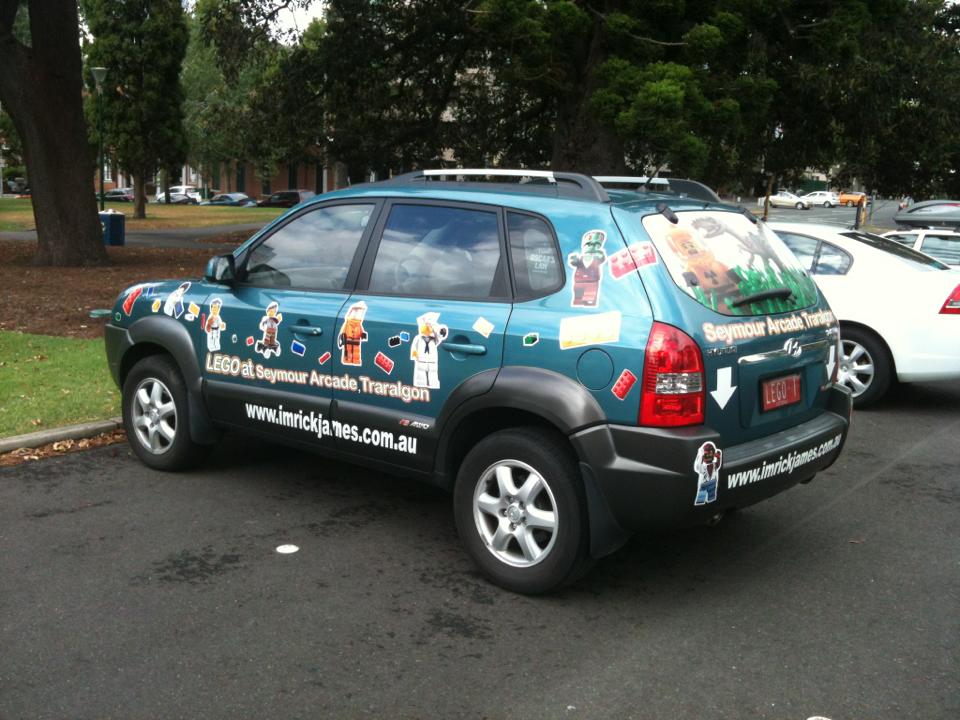 Picture a vehicle plastered with LEGO characters from the Collectible Minifigure Series with a very mysterious website advertised “www.imrickjames.com.au” parked outside my home. My first thought was “wow, this guy’s a huge LEGO fan” and I thought that his website was a clever twist to David Chapelle’s iconic movie line. I thought nothing of it till a few months later when again, I spotted the same car driving on the highway that I decided to punch in the website into my browser to see what it was all about.

I didn’t expect to find out that I’m Rick James Bricks was a toy shop in Traralgon that exclusively sold LEGO. I made the trip all the way to Traralgon, which is about 45 minutes from my home as I was so intrigued by a speciality LEGO store, which was a bit of a rarity here in Australia. Note that the Traralgon store has relocated to Pakenham.

I met Rick Foster (the Rick James Bricks part suddenly made sense to me) in his quaint LEGO-filled store in regional Victoria and I immediately discovered that my first impression of his LEGO-car was spot on – He was a really huge LEGO fan. 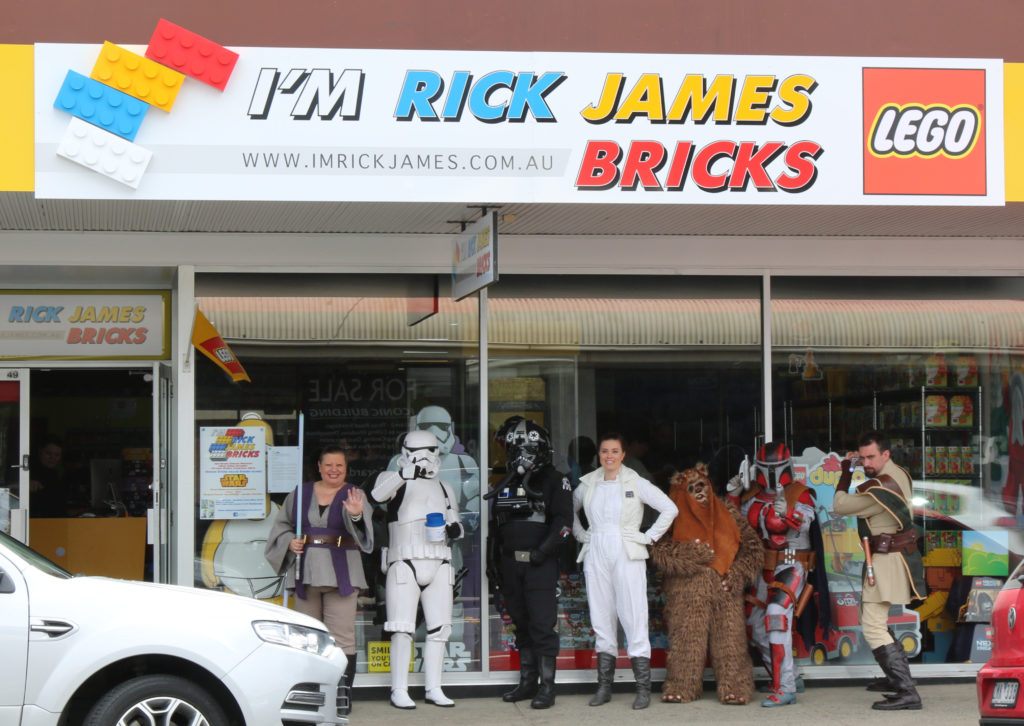 In my second Store Spotlight post, I’ve elected to feature Rick’s brand new Pakenham store, which opened its doors a couple of months ago. If you’re unfamiliar with my Store Spotlight posts, it’s a series of interviews where I feature LEGO stores and their owners.

What I really like about browsing and buying LEGO at I’m Rick James Bricks is the indisputable fact that Rick is a huge fan of LEGO. His customers will probably attest to this – his love, knowledge and enthusiasm for LEGO really shines through and it’s such a pleasant experience shopping in his store, knowing that there’s someone on hand to talk to about purchases, LEGO sets and everything else you can think of. 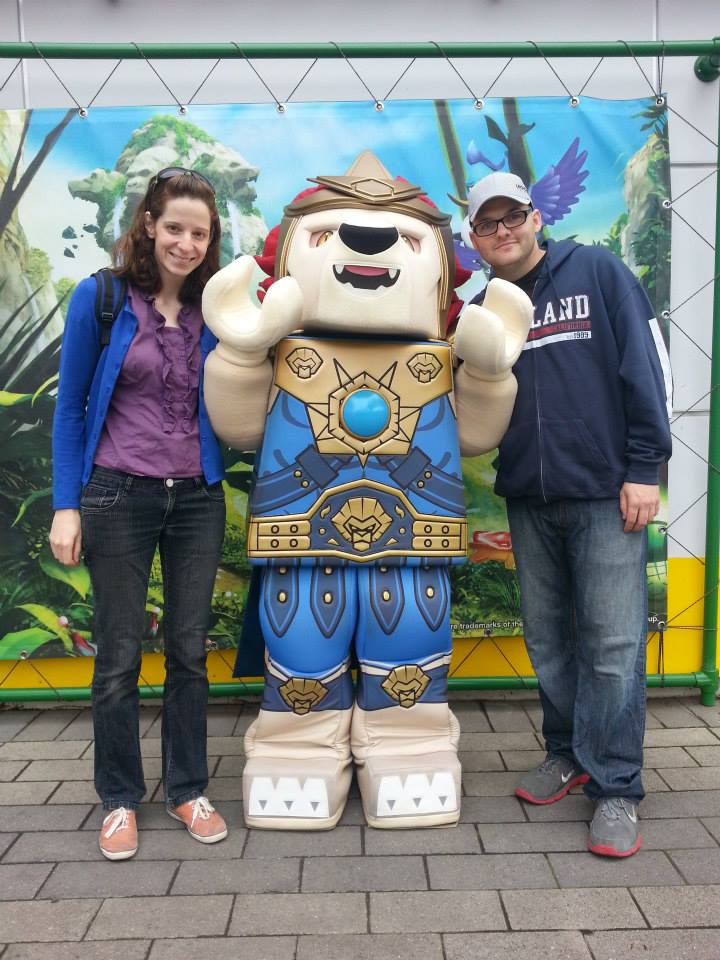 Rick and Caroline at Legoland California

I can effortlessly spend so much time just chatting to Rick about LEGO, which is why his store is one of my favourite places to buy LEGO from.

Another great thing about I’m Rick James Bricks are his prices. LEGO has an unfortunate reputation of being “expensive” and Rick has done a tremendous job ensuring that his prices are competitive. Don’t expect clearance sale prices, but the prices of his products are generally really good in comparison with RRPs and hey, it always feels good supporting local businesses instead of the big boys like Kmart and Myer.

It’s August so the new wave of sets are starting to show up in his store, starting with the new Guardians of the Galaxy sets, so if you’re looking to pick up some of the newer sets, be sure to keep an eye out on his Facebook page.

I recently had the opportunity to chat with Rick Foster, proprietor and owner of I’m Rick James Bricks Pakenham about LEGO, the retail business and what it’s like selling LEGO for a living.

Jay’s Brick Blog: Most LEGO fans are content with amassing huge collections but you went a step further and started a LEGO store. How did yo make the leap from collector to LEGO merchant?
It’s actually a funny story – It got so bad that I was given an ultimatum by Caroline (my wife) after I amassed a huge collection which included things like a Life Sized LEGO Woody Statue. She told me to make a job out of it so that’s what I did! I started small selling at LEGO events and now I have my own LEGO store which is quite awesome! My LEGO collection is still massive – I’ve got about 11 LEGO statues and counting! 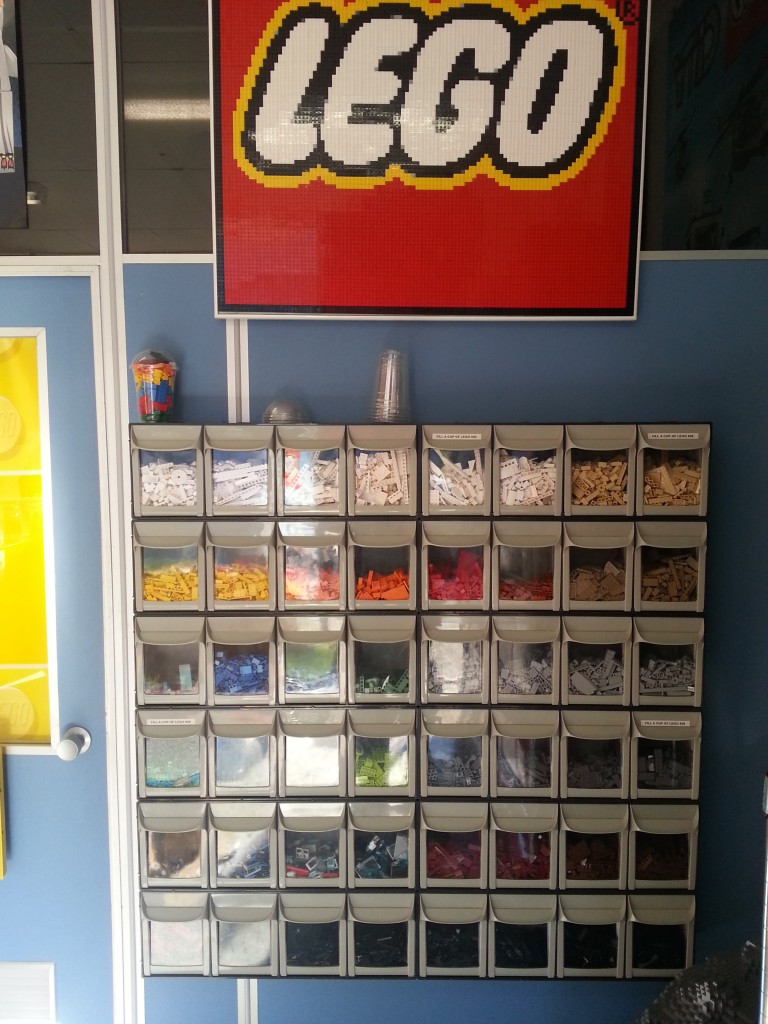 Your store in Pakenham is quite a unique LEGO shopping experience. What makes it special and what are some of the cool stuff that LEGO fans can expect when they walk in?
I’m Rick James Bricks Pakenham is an awesome LEGO store and is something that I’ve always dreamed of. For LEGO fans who want to buy LEGO bricks, we have Rick’s Bricks – a concept that is similar to Pick a Brick where you fit as much LEGO as you can into a cup. There is a large selection of bricks on the wall to choose from.

For minifigure lovers, you can also build 3 mini figures for $10 from various combinations of heads, bodies, legs and accessories. We also have a couple of cool LEGO displays that change every once in awhile.

Running a LEGO store might sound like one of the best jobs in the world. Can you tell us about what that’s really like?
Well, I really love my job but like any occupation, it has its occasional ups and downs. At the end of the day, I am blessed to have the shop that I have.

What has been the impact of The LEGO Movie? Did you notice a tremendous amount of new LEGO fans?

Wow, where do I start about The LEGO Movie. It’s quite clear that LEGO is more popular than ever, with the movie obviously doing a lot to help. I also think that LEGO has done a fantastic job continuing to do cool things and get fans excited for the next best thing. Sets such as the LEGO Ideas Ghostbusters Ecto-1 come to mind. I can’t wait to see what LEGO comes up with next. 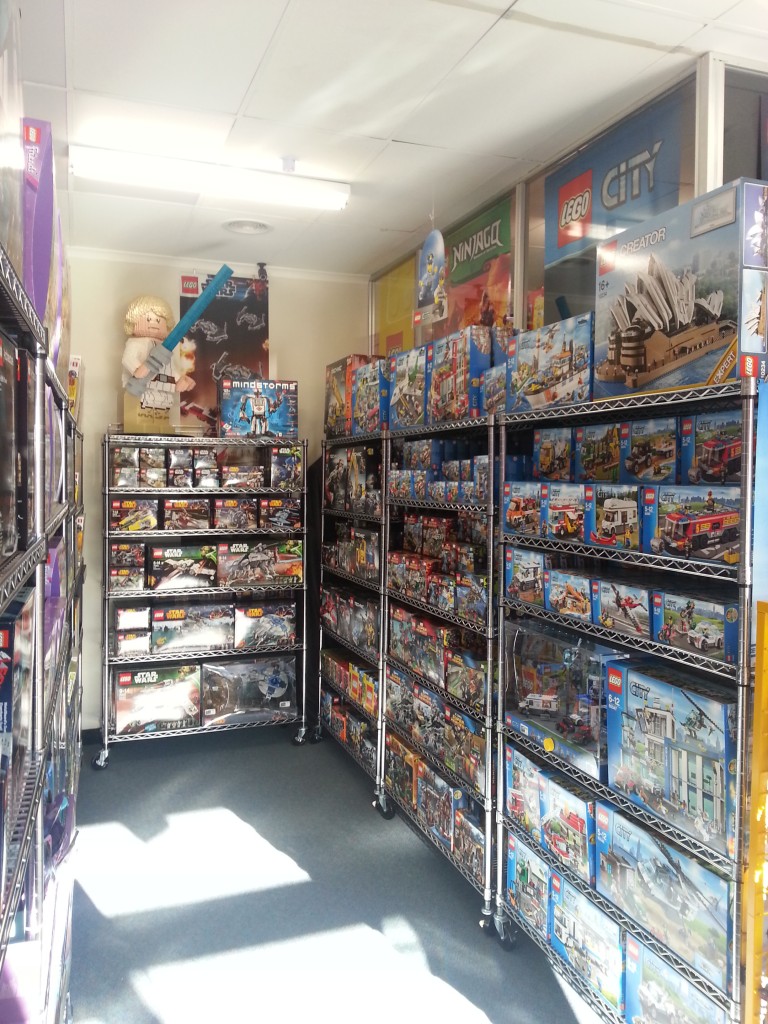 Based on your observation, what are some of the more popular sets or themes?
LEGO City is continuously the number 1 best-selling theme for LEGO because it is so relatable to every day life.

Who makes up the majority of your customers, AFOLs or kids?
Children! Definitely children.

Is there a reason that you don’t sell LEGO online?
Keep your eyes peeled! We’ll have something to announce very soon! 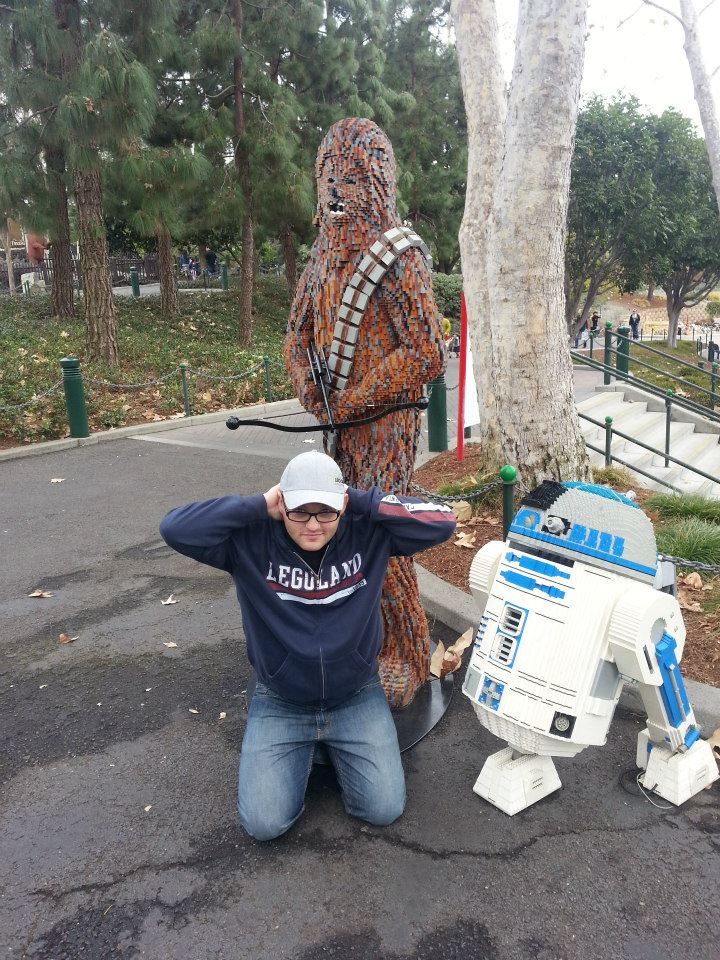 What’s the favourite part of your job?
Obviously, it’s getting to play with all the new goodies and LEGO sets.

You obviously have an enormous LEGO collection. What is your favourite set or theme of all time?
I have to say the Creator Modular buildings. I only have one word to describe them: AWESOME!

With LEGO being your day job, do you still manage to find time to relax and play with your LEGO? If not, how do you relax and get away from ‘work’?
Yeah I still enjoy playing with LEGO and I will never get sick of opening and putting a new set together. I might be surrounded by LEGO every day, but that’s also how I relax. 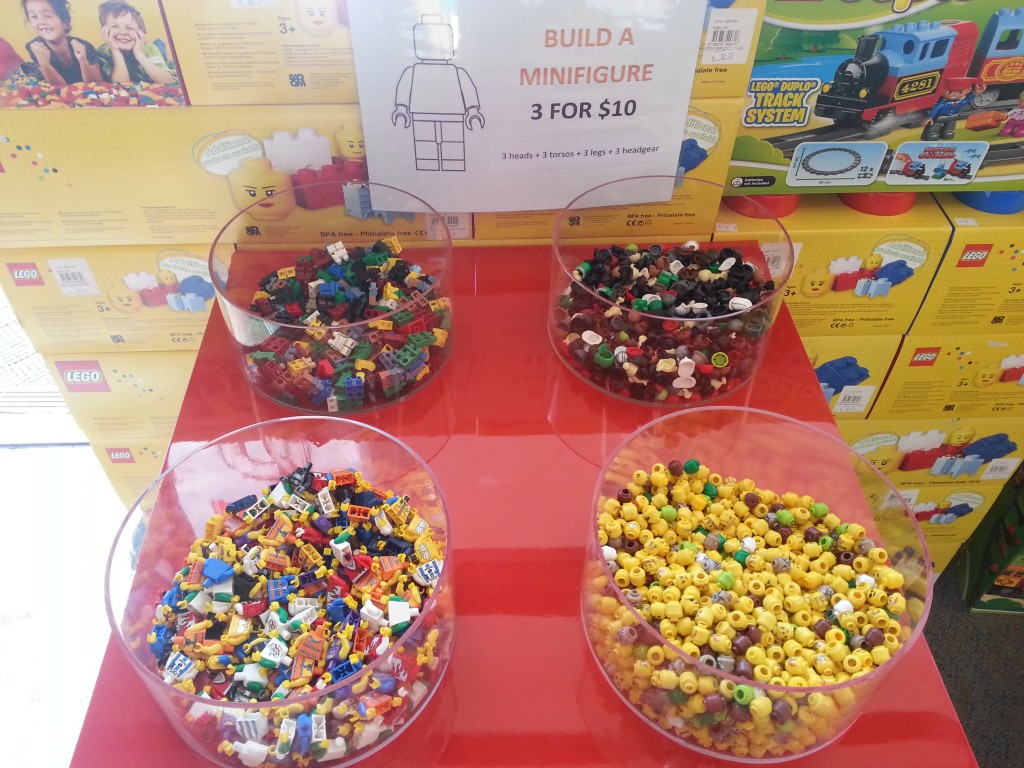 Build 3 minifigures for $10 from an assortment of parts

If you were given total creative control over the next theme or set that LEGO creates, what would it be and why?
I think I would love to create a pop culture theme, paying homage to some of the most interesting and influential facets of society and pop culture. It would be cool if we could bring out new pop culture themed sets every month.

With the success and how well received The Simpsons set has been, I could also see a Futurama theme happening. Now, that would be cool.

There’s quite a popular belief that LEGO is getting more and more expensive. What are your thoughts on that?
I have to disagree with that. LEGO is cheaper now than when it was when I was younger. The price of LEGO sets have remained the same, even though wages have gone up to match inflation but the price of LEGO has been relatively unchanged. It might surprise you, but LEGO are actually trying their hardest to keep prices down for consumers.

Lastly, you have one LEGO wish for 2015. What would it be?
I’d wish for a Police Station Modular set, made in the same style as the Fire Station.

Huge thanks to Rick for taking the time to answer the questions. If you’re in Melbourne and are looking for an unrivalled LEGO retail experience, I highly recommend paying I’m Rick James Bricks a visit. You can also follow him on Twitter, Instagram or Facebook.

About the Store Spotlight Series

I find LEGO fans who have taken the bold leap to actually turn their hobby into their main source of income both admirable and a little bit crazy (in a good way). Every store and store owner has a unique story which I hope to tell in these posts.

LEGO-only bricks and mortar stores are a bit of a rarity in the grand scheme of things. LEGO being primarily a touch and feel kind of experience naturally necessitates a physical shopping environment for best results.

There’s nothing like browsing the shelves in a store, picking up boxes, looking at the illustrations and hearing that rattle of a box of bricks in your hands.

The Store Spotlight series looks to profile and tell the stories of independent LEGO stores and their owners.