Apologies for not updating in awhile! Have been pretty swamped with other stuff that’s happening in my life as well as preparing for a short holiday back to Malaysia next week. That being said, I’ve finally found some time to build and review the other Super Heroes themed Junior set, the slightly larger Batman: Defend The Batcave set! 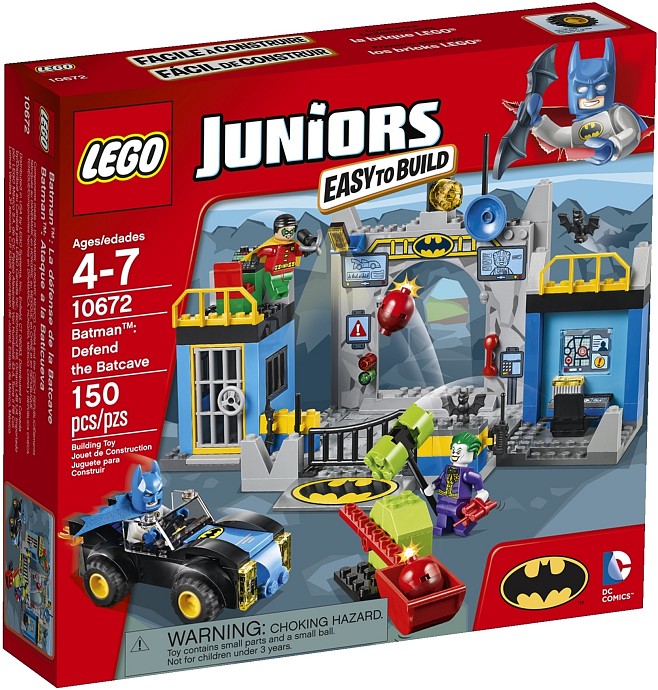 Batman: Defend the Batcave is the DC counterpart to Spider-Man’s Spider-Car’s Pursuit, housed under the LEGO Juniors umbrella, one of the newer themes aimed at bridging the gap between DUPLO and proper LEGO sets.

The Batman set caught my eye and it was an easy purchase because you can never have too many Super Hero minifigures and printed elements. 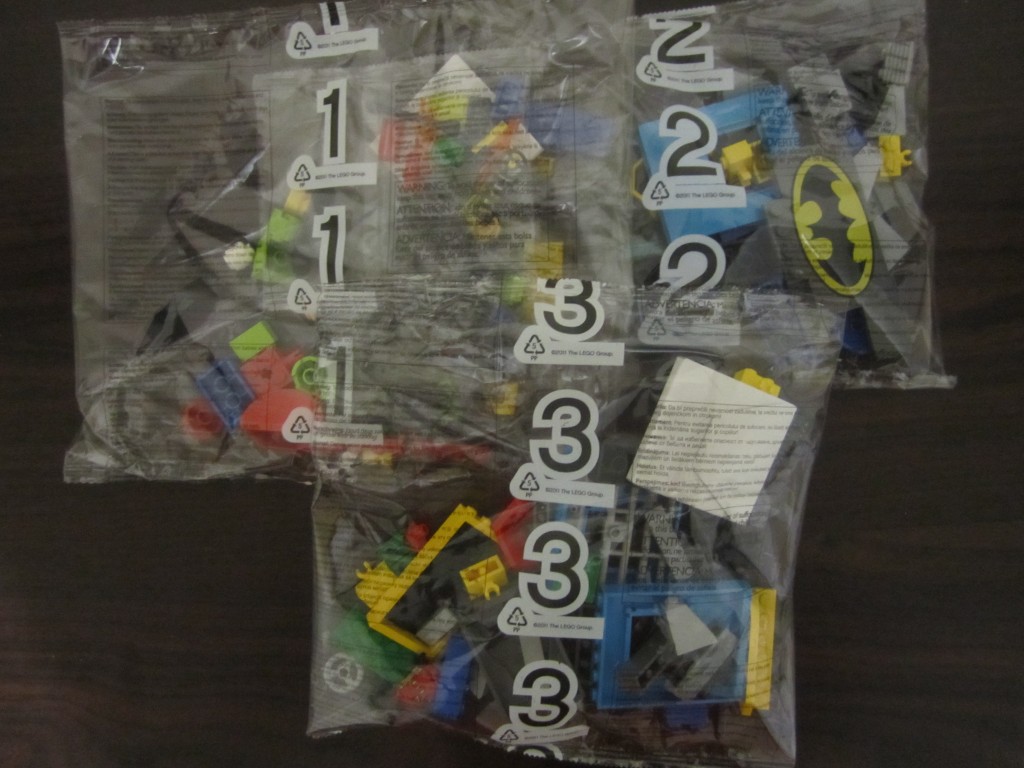 The set is three times the size of the Juniors Spider-Man set and is a much much more satisfying build. Three poly bags numbered for your convenience. 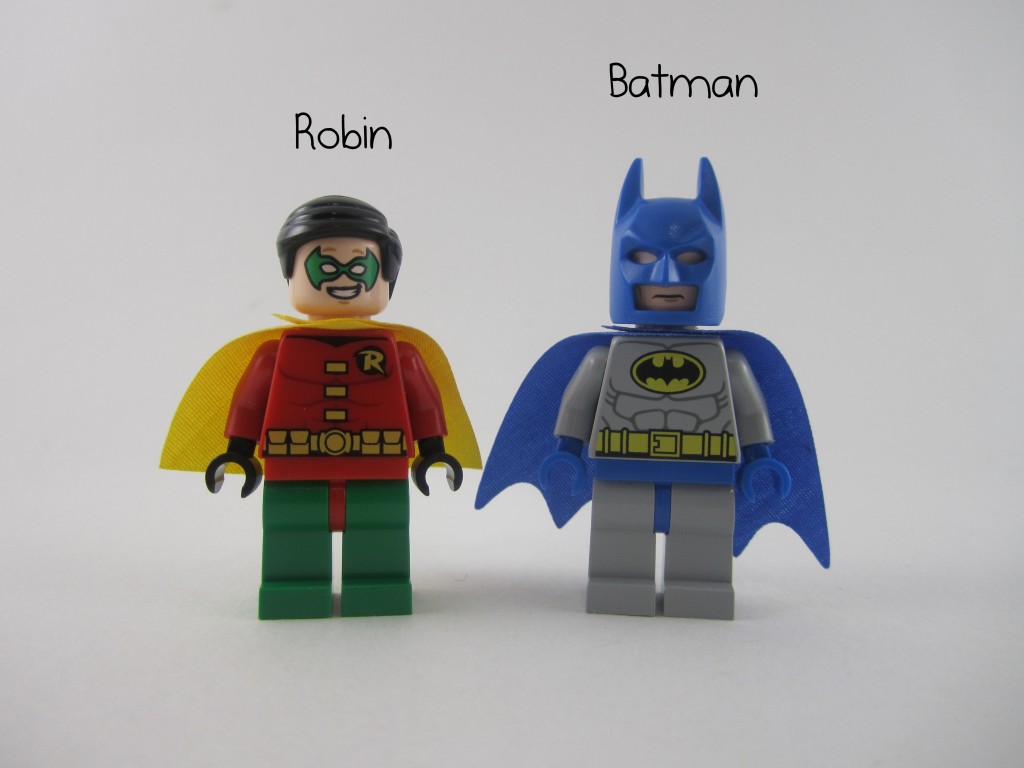 Here’s the Dynamic Duo, Robin the Boy Wonder and the Dark Knight of Gotham, Batman. Both minifigs are unique to this set, with the classic Robin costume my favourite out of the two. This is the first edition of Dick Grayson’s iconic green, red and yellow circus costume and I’m a huge fan of the bright colours. Comparably, Batman comes in his retro looking Grey and Blue Batsuit. I really like Robin’s comically short cape. 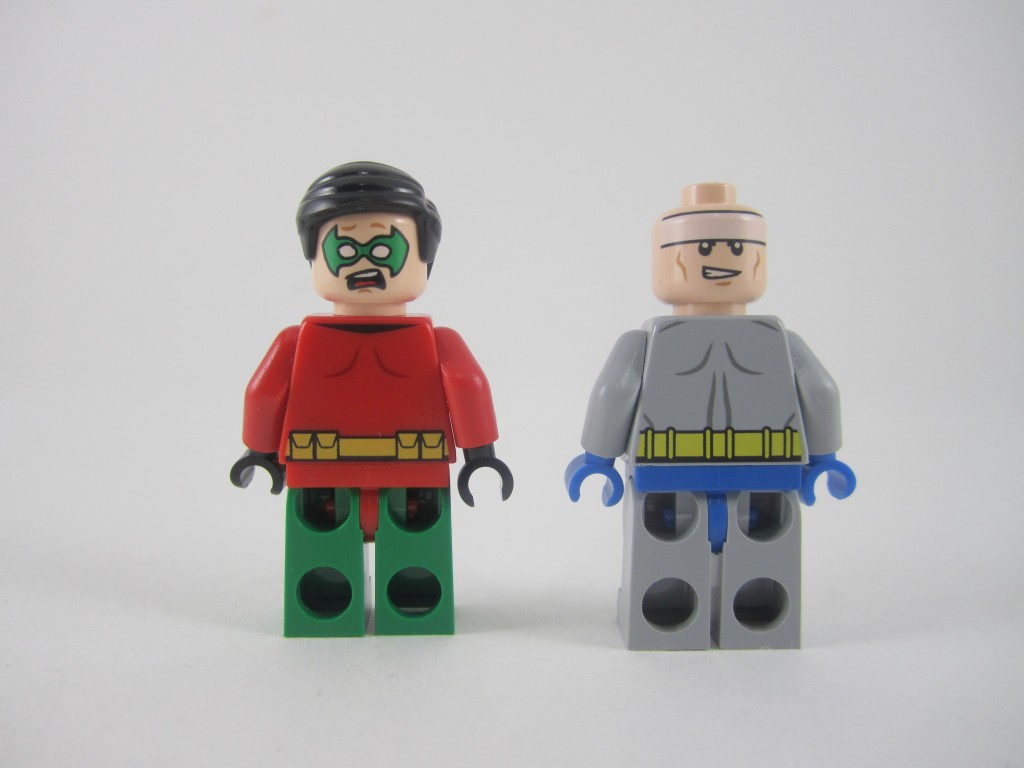 Back printing and an alternate face present and accounted for. Robin’s startled/puzzled look cracks me up every time. 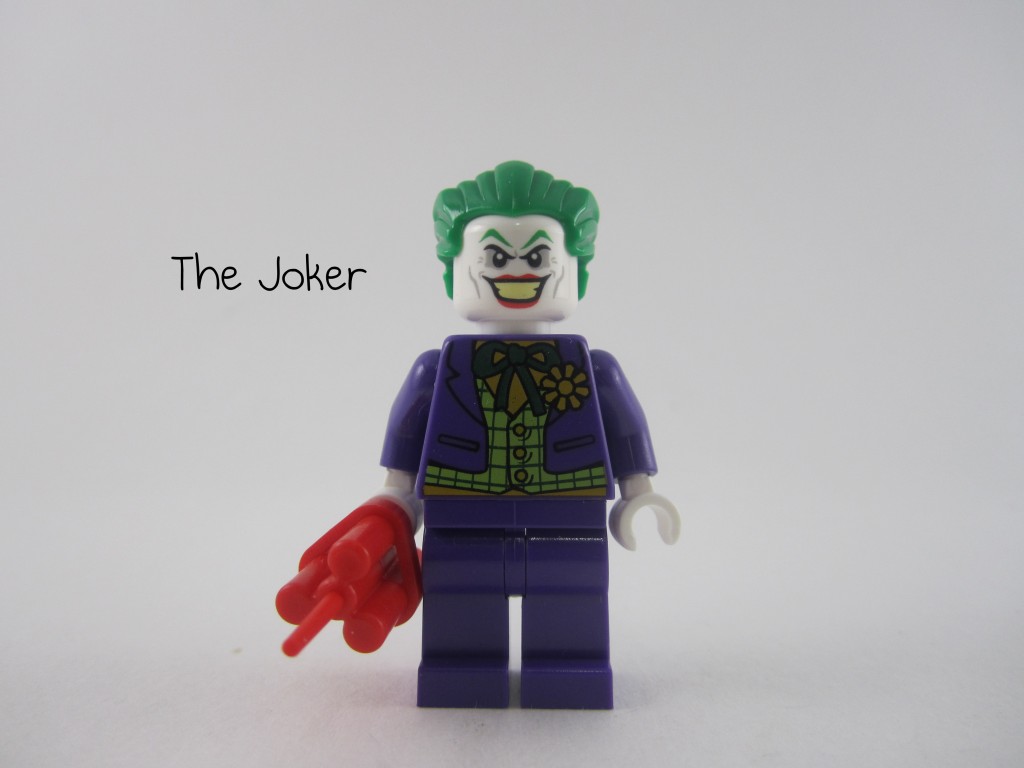 Here’s The Joker who unlike Batman & Robin, has appeared in 2 sets previously so he’s not particularly special but is a nice addition to my collection. I like the Jack Nicholson Joker look, but I’m hoping that we get a more Heath Ledger Joker soon; something I doubt will happen since most of the LEGO Super Heroes sets retain their comic book aesthetics. 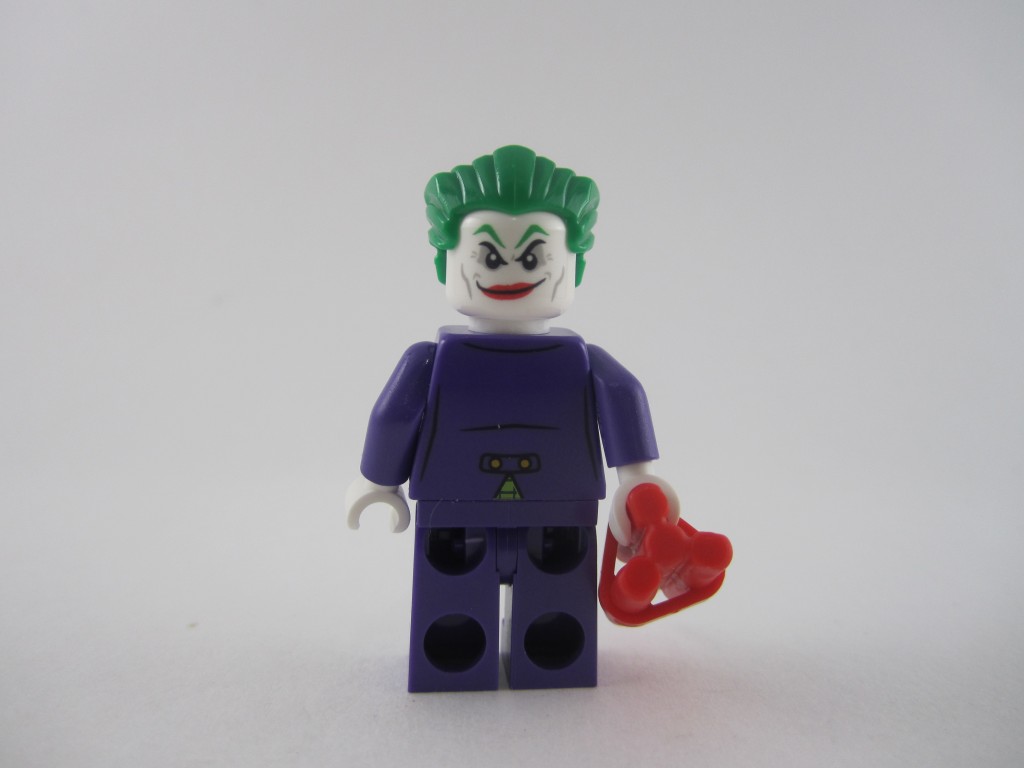 Like the good guys, The Joker also has an alternate face and back printing. Even though The Joker isn’t a new minifig, his purple jacket torso is a fantastic part to have. He’s carrying a stick of dynamite to blow up The Batcave. Someone needs to tell him that he’ll probably need more explosives to destroy Batman’s secret lair. 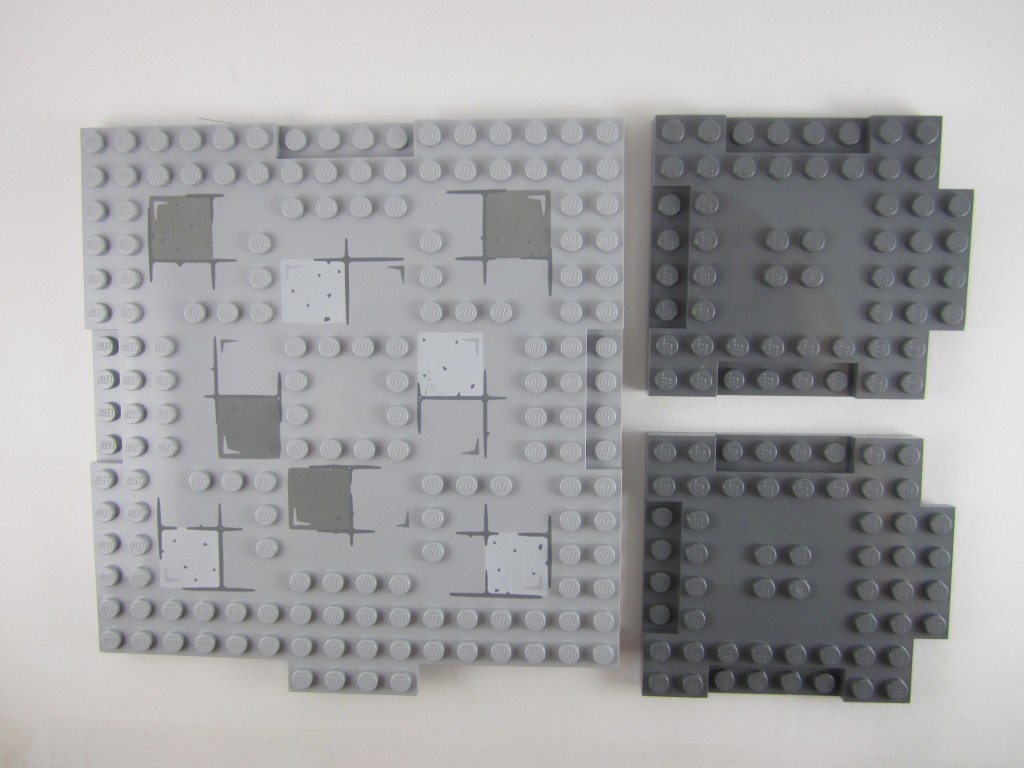 I love the amount of printed elements that they pack into the Juniors sets. We have a large 16×16 base plate with concrete details printed onto it.

Here’s the treasure trove of printed elements! A massive wall-arch hybrid decked out with screens and Bat-details. It’s going to be tricky incorporating the wall-arch into your own creations but let’s just appreciate the fact that LEGO produced a massive printed arch piece.

On the right is the jackpot with a blue 2×4 blue tile with a Batman logo and a massive rounded slope with a huge Batman symbol. You also get a neat transparent screen with a map and minifig silhouette which will stroll into any Agents or Space-themed creations. 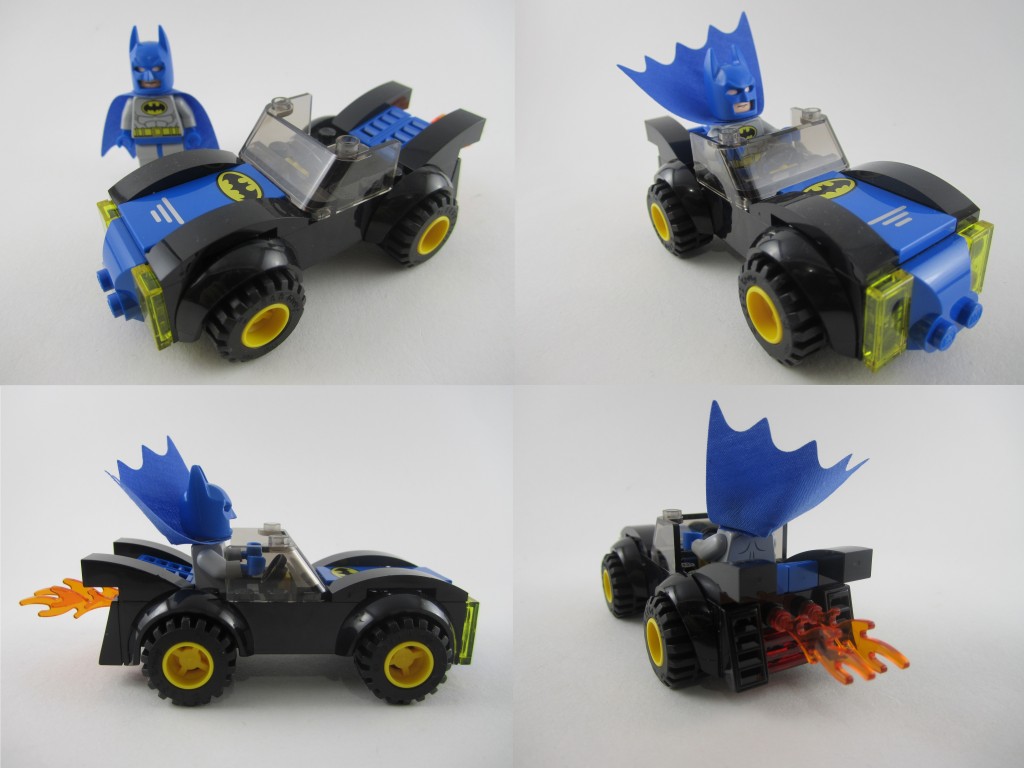 The first thing you put together in Bag 1 is a miniature Batmobile. It uses the same frame and most of the building techniques as Spider-Man’s Spider-Car. The colours used in the Batmobile complement each other really well, especially the yellow rims. It looks more like a Bat-Car than a Batmobile, but it’s a set aimed at young kids who will still be very excited that Batman has a vehicle that has flames shooting out its exhausts. 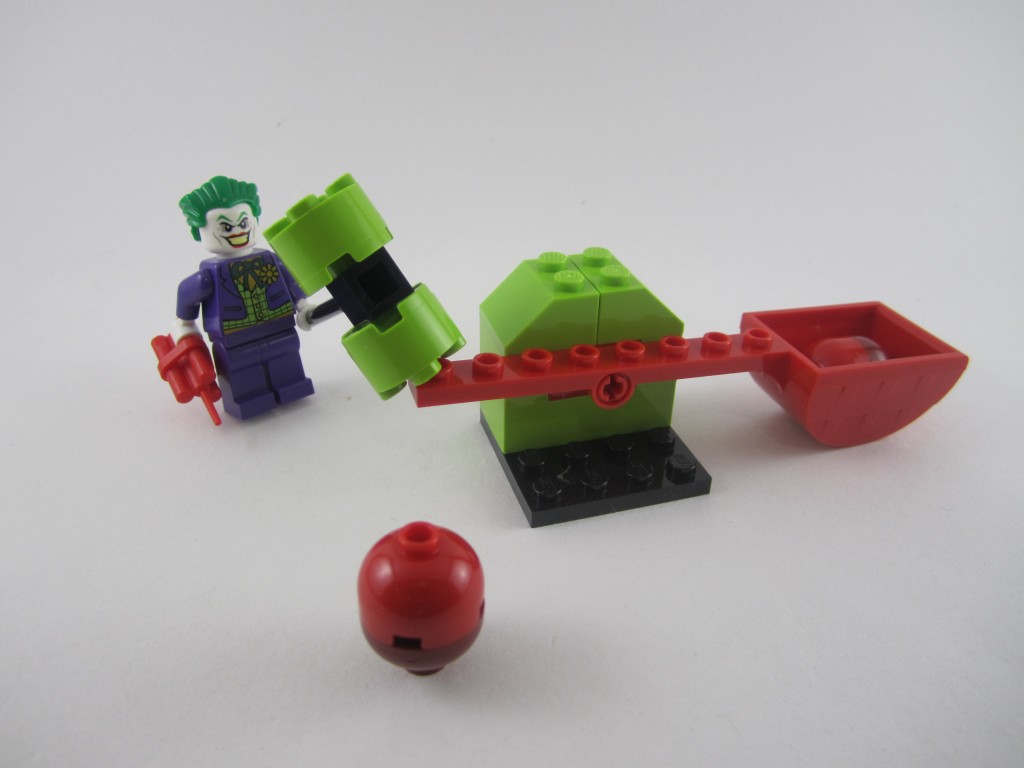 Oh and you also build this gigantic silly catapult complete with a massive green hammer. There are two bombs that can be hurled into the Batcave which is way better strategy than a solitary stick of dynamite. You can’t deny that The Joker doesn’t know how to have a fun time. 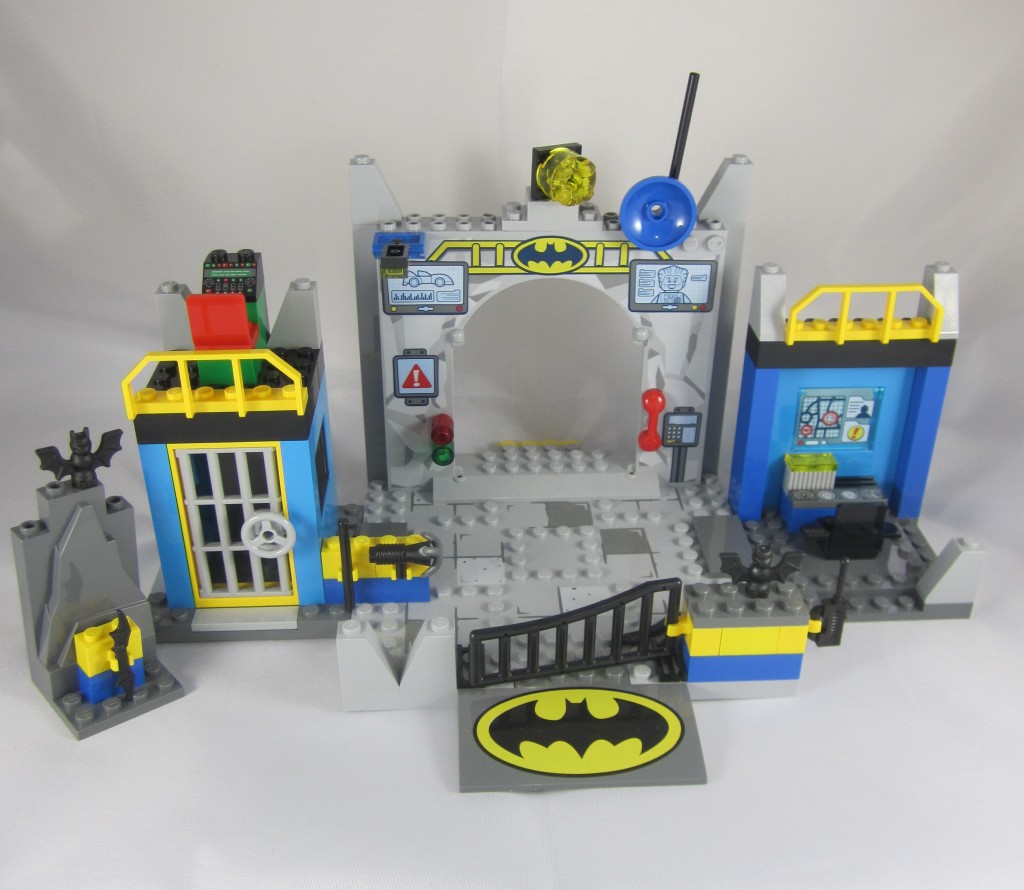 Bag 2 and 3 puts the entire Batcave together. I’m very impressed by the use of yellow and blue bricks to contrast the more drab grey hues. 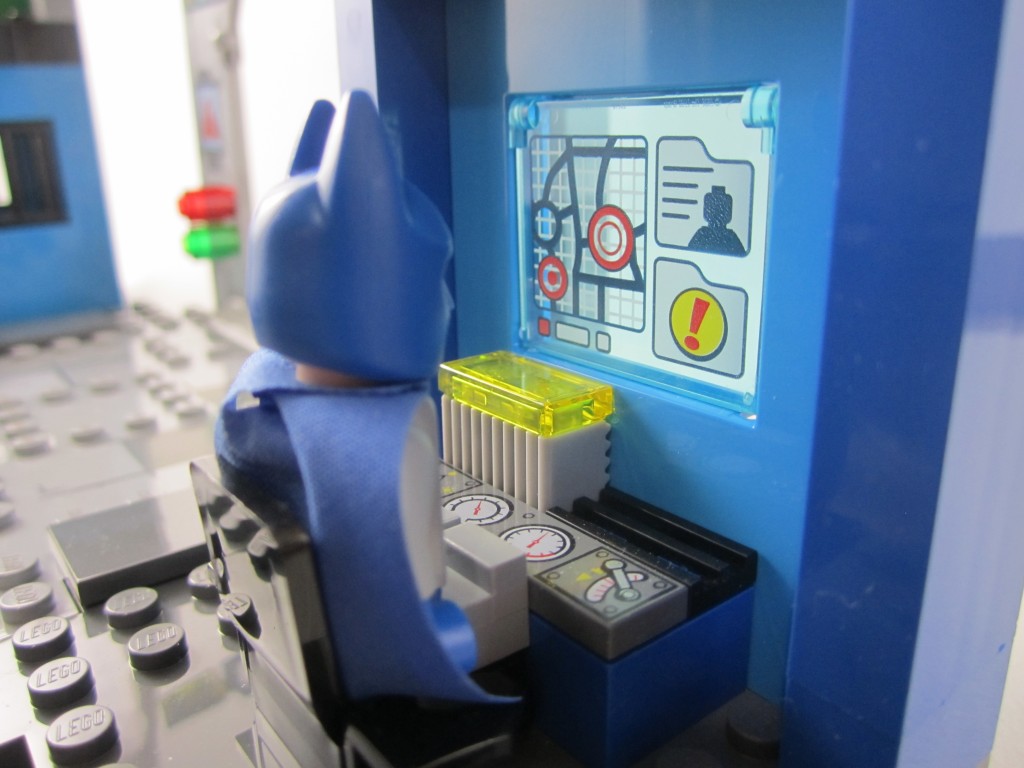 Batman has a console which he uses to track down criminals in Gotham City. The 1×4 tile which has analog gauges is a little out of place compared to the high tech display right above it! 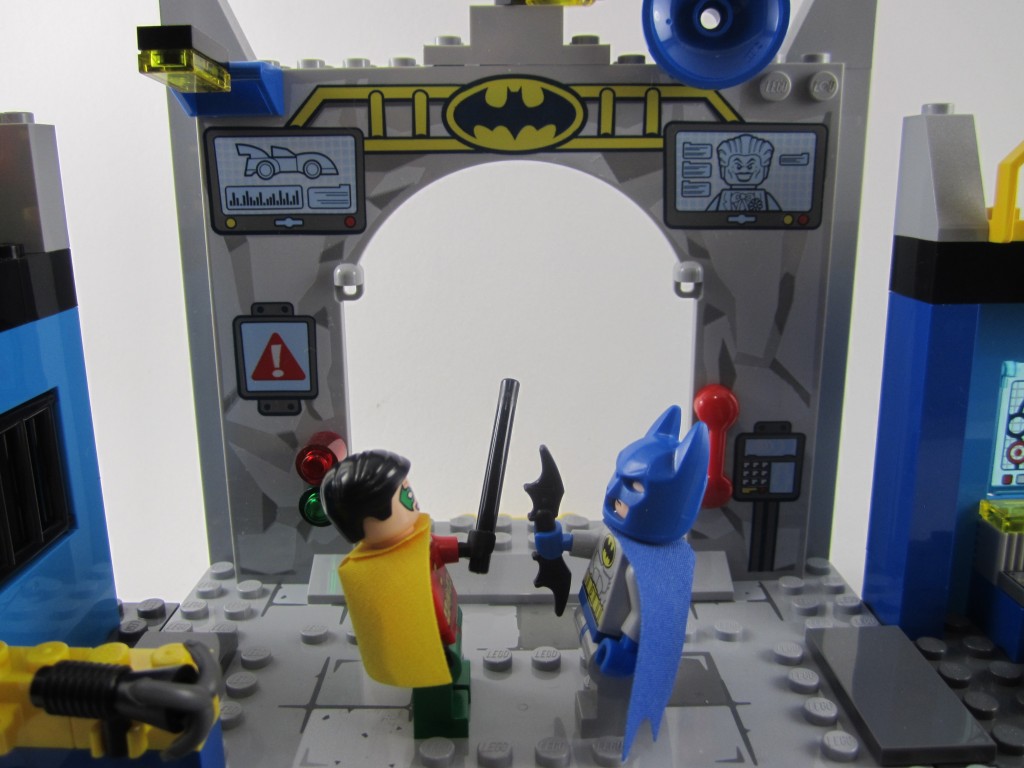 There’s a large expanse in the middle of the Batcave which can either be used to park the Bat-Car or for sparring matches. 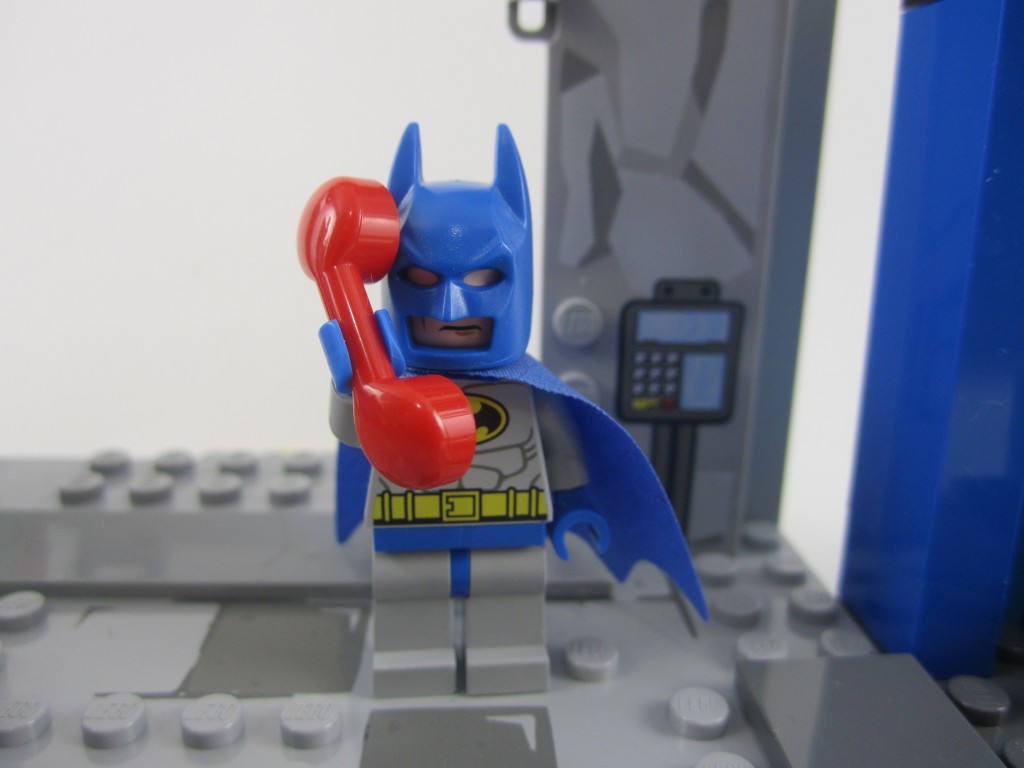 This has to be my favourite Easter Egg hidden in the Batcave. A Batphone! It’s a throwback to the 1960s Batman TV series starring Adam West, arguably the best Batman in history. 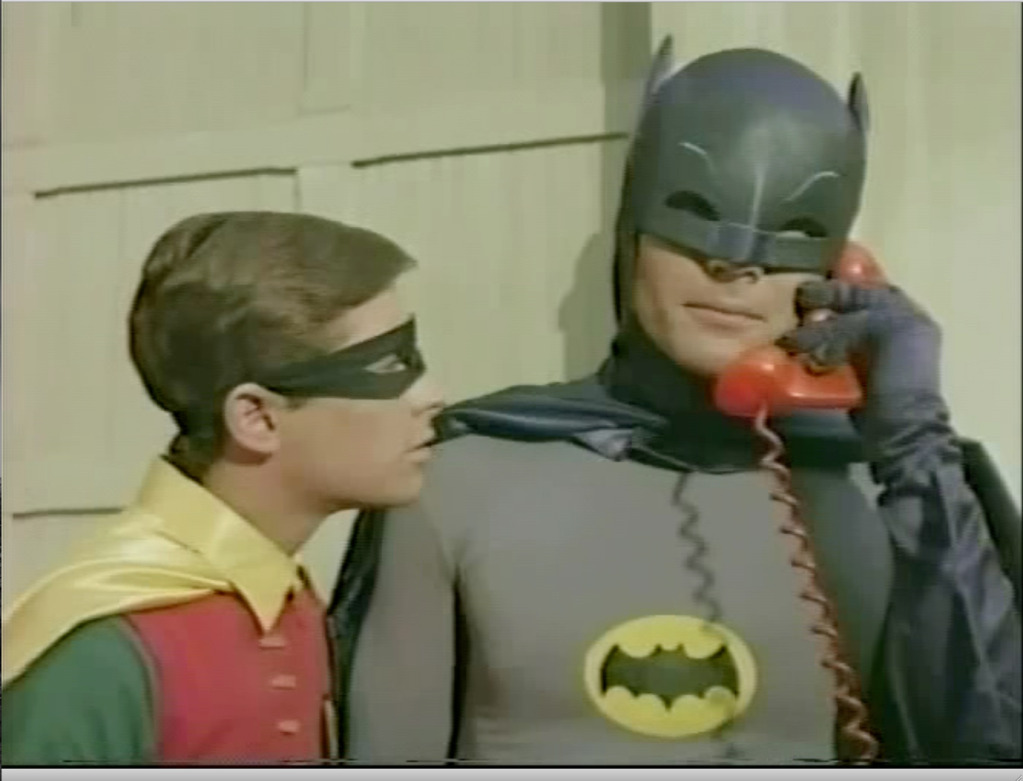 Batphone from the 1960s for reference! 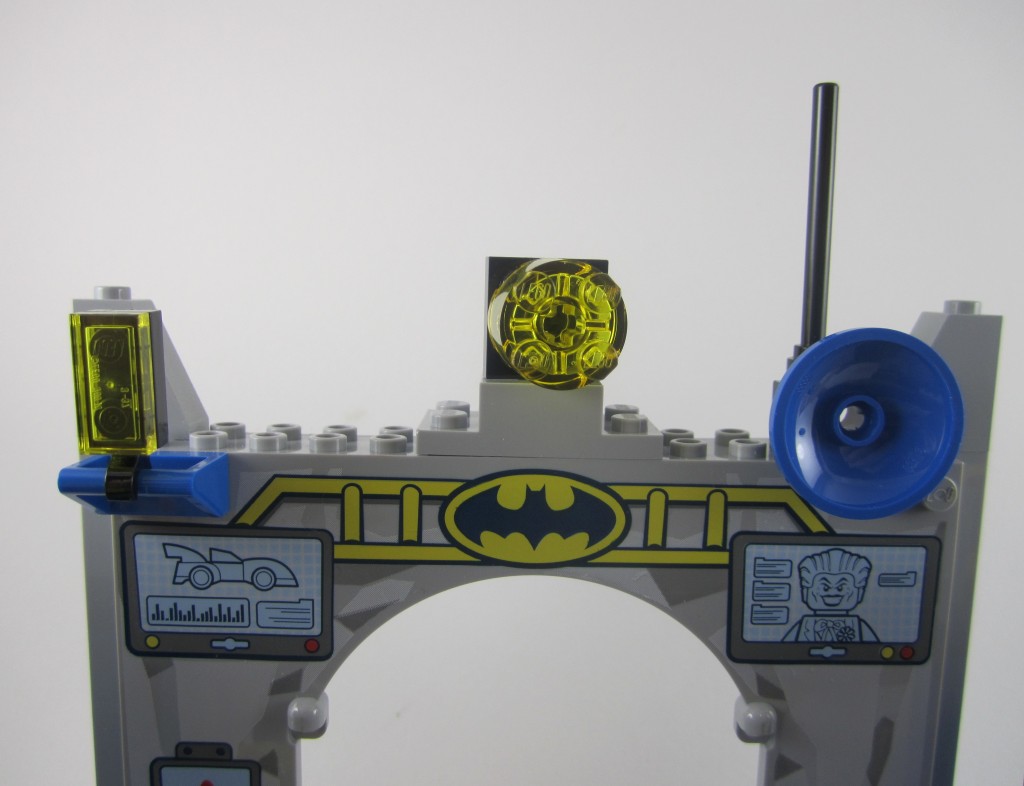 The top of the arch has a few bell and whistles, including a radar dish and two surveillance lights. The middle one swivels around and is a simple neat play feature which I rather enjoyed. 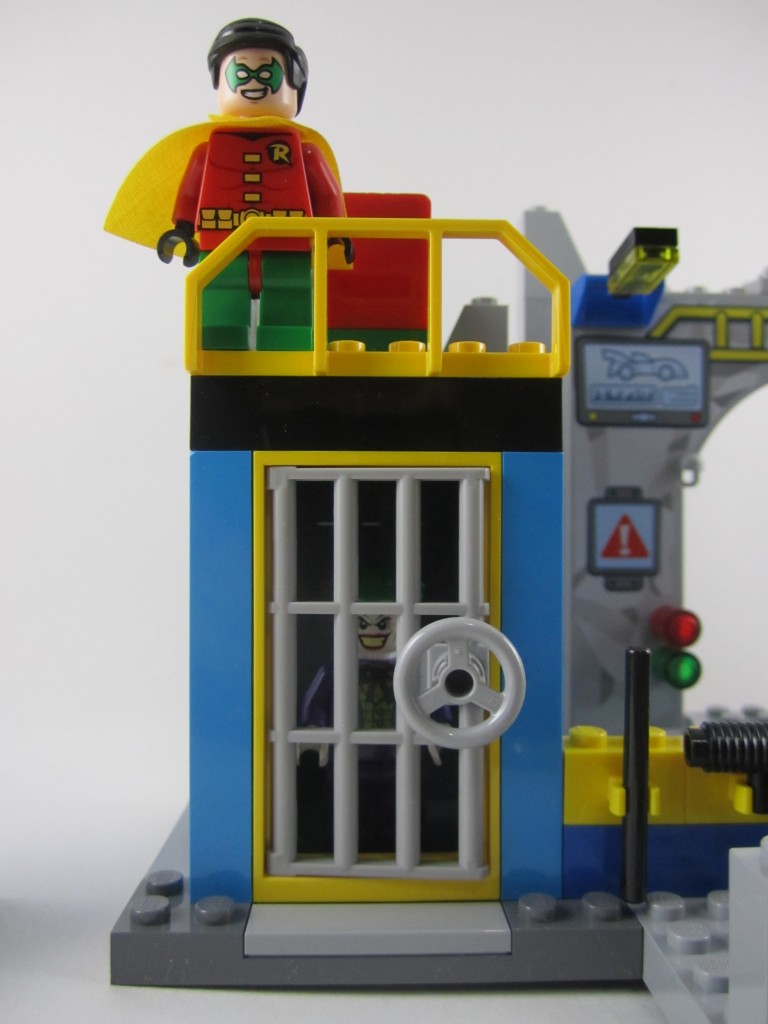 The right hand side of the Batcave houses a tiny jail cell for Gotham’s villains. I guess keeping the bad guys in the Batcave is a lot safer than housing them in Arkham Asylum which always seems to fall victim to jailbreaks! It also looks like Robin is tasked with security and ensuring the villains don’t escape. 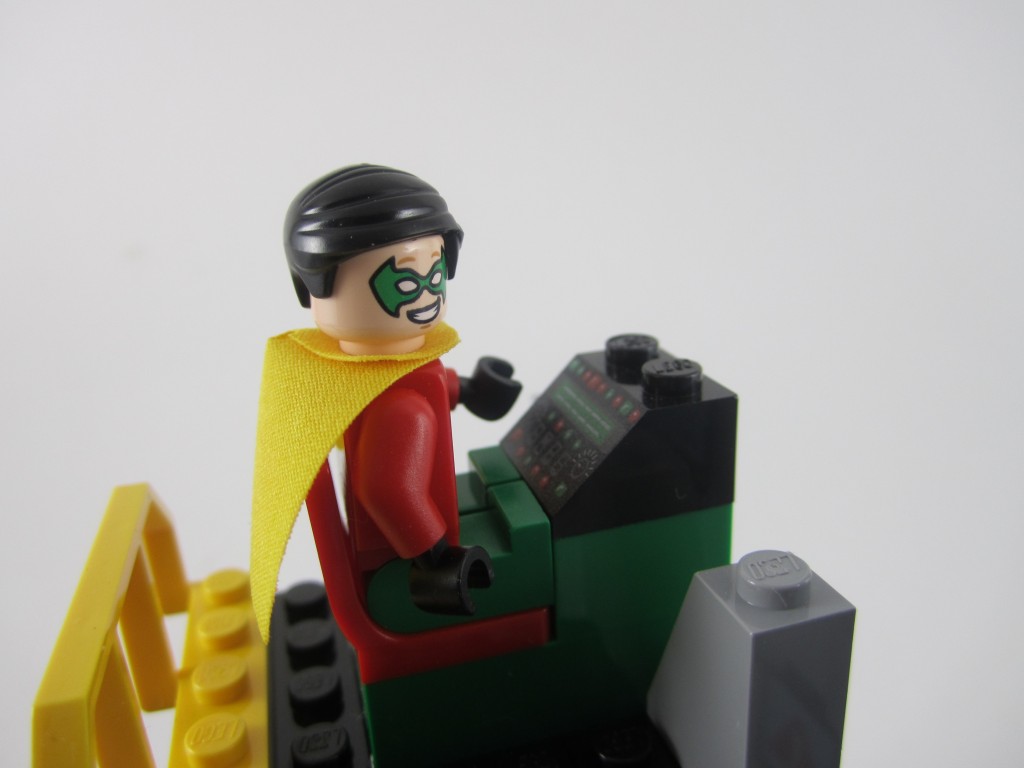 He even has a tiny computer housed on top of the jail cell! He’s obviously very proud of his little workstation. Not sure if this was a coincidence but I like that the console’s primary colours are red and green just like his costume. 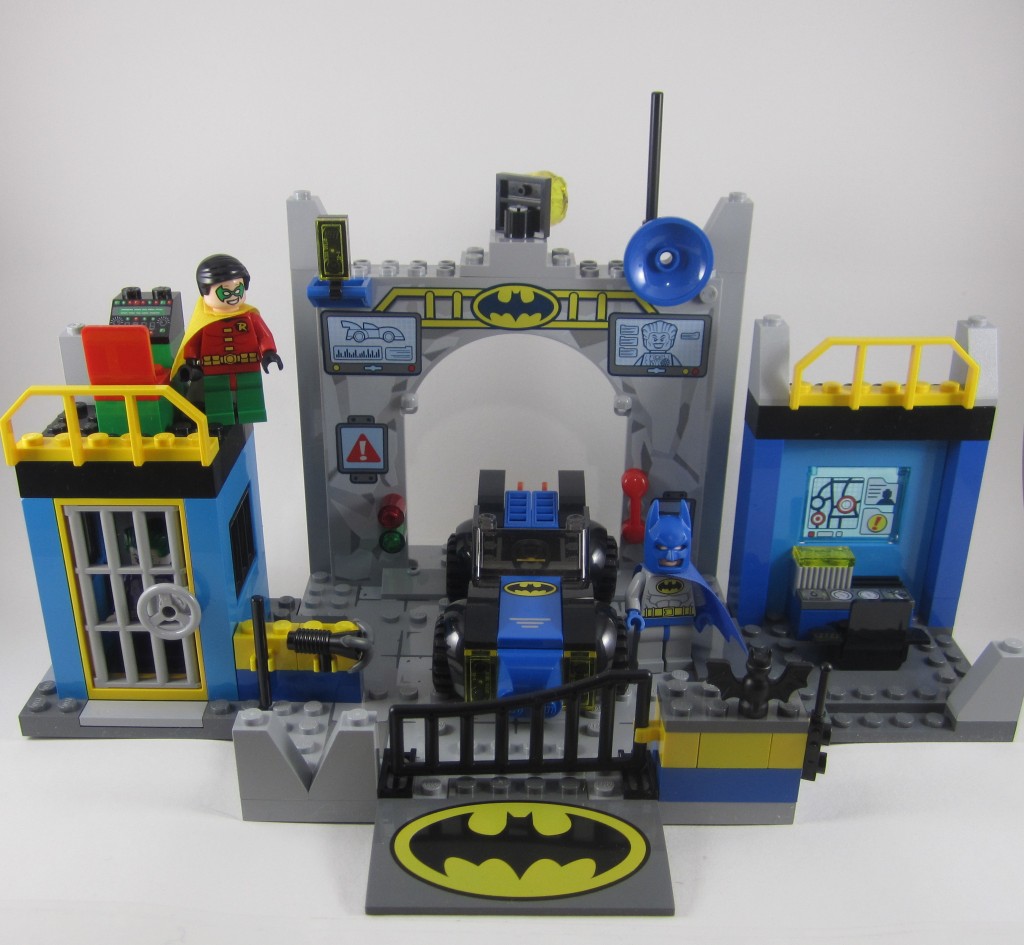 Final Thoughts: I missed out on 2012’s Batcave so I was pretty pleased to get this set. For $35, I thought this set was great value and after building it, I’m glad to say that I felt like I got my money’s worth. The retro Batman & Robin minifigs are great value and essential if you’re a fan of LEGO Super Heroes. Even though it’s a Junior set, the build was surprisingly fun and didn’t feel like I was building a set meant for 4 year olds. Unlike the Spider-Car set, I wasn’t left wanting after I completed the set.

Should You Buy It?: If you’re fan of LEGO Super Heroes, bpurchasing this set is a no-brainer. It’s got a ton of value and if you can get this set 20% off retail, even better. You get 3 main characters from the DC Universe and a nice bunch of printed elements in addition to miscellaneous parts. Some parts like the bigger walls and base plates might be a little more difficult to incorporate into creations but never doubt the ingenuity of the LEGO community. This set will make a great gift to your younger cousins, nieces or nephews or even an older LEGO fan!

Thanks for reading the review! Will leave you with two pictures of the minifigs in questionable poses. 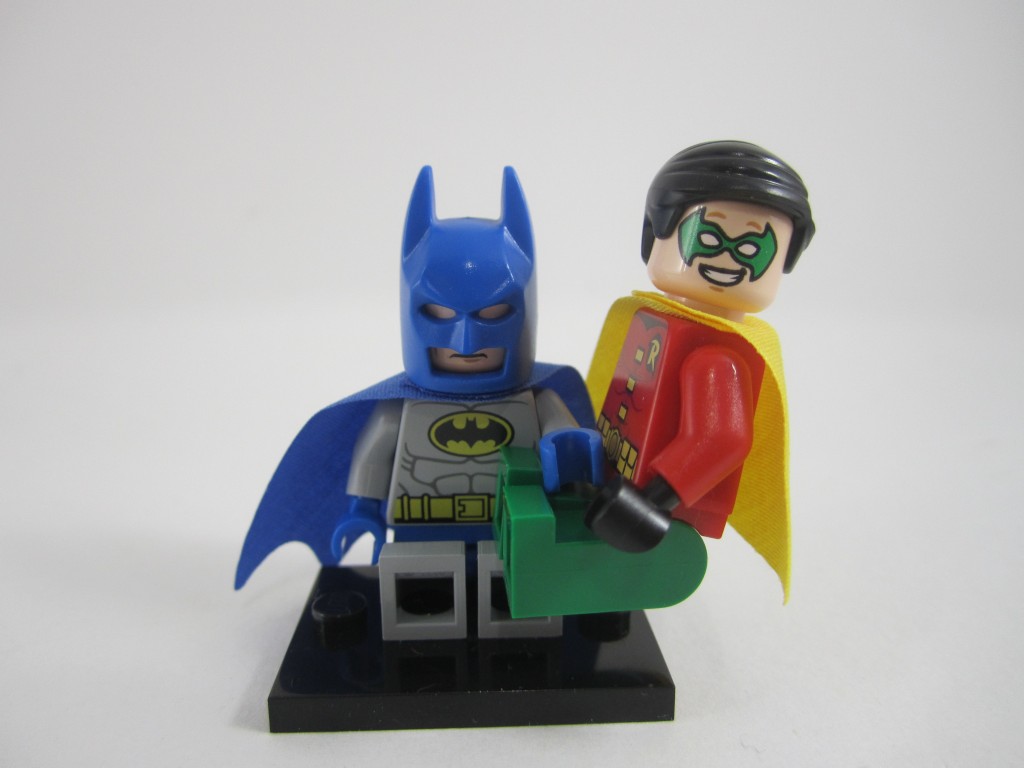 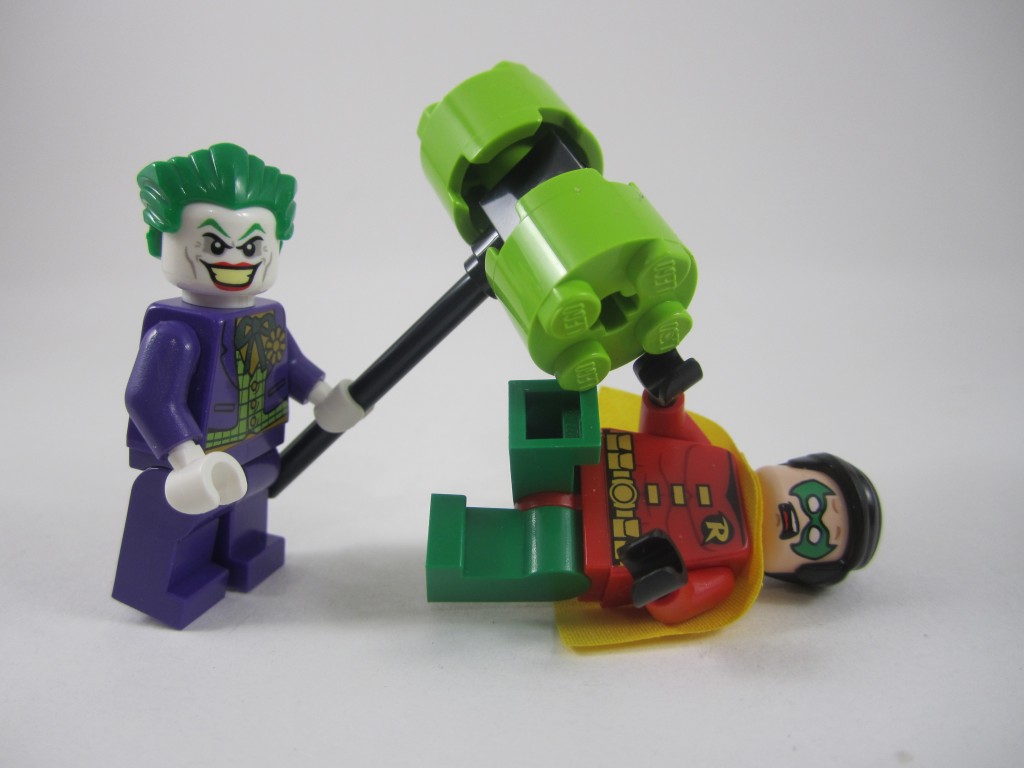