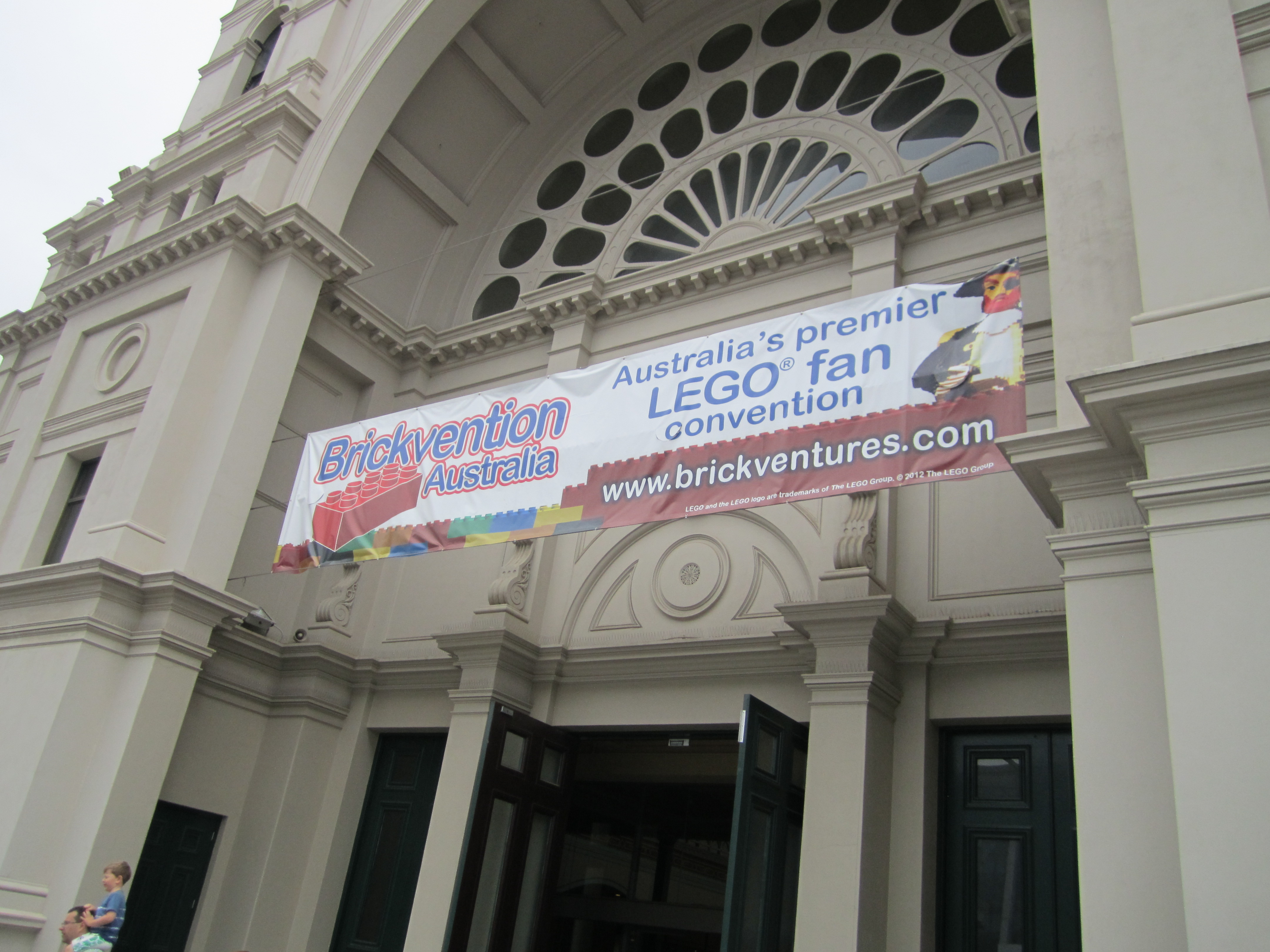 So last Saturday was a pretty exciting affair. I finally managed to go for my very first Brickvention, an AFOL-convention that’s held annually in Melbourne. Somehow, I’ve always managed to narrowly miss it for the past 2 years. This year’s was held at the Royal Exhibition Building in Carlton.

Firstly, I have to apologize for some of the photos. Quite a significant number didn’t turn out too well due to the lighting and difficulty of getting some good shots due to the sheer number of people there. That and I’m using a pretty old point and shoot. So yeah, I was quite disappointed by many of the shots as they were way below my usual standards. A new DSLR would be nice 😉 *hint hint*

Anyway, here are some of my favourite pictures from Brickvention 2014. For the full album you can check them out on my Facebook page Entrance to the REB. As you can see the venue was packed, mostly with families with tons of kids running about. 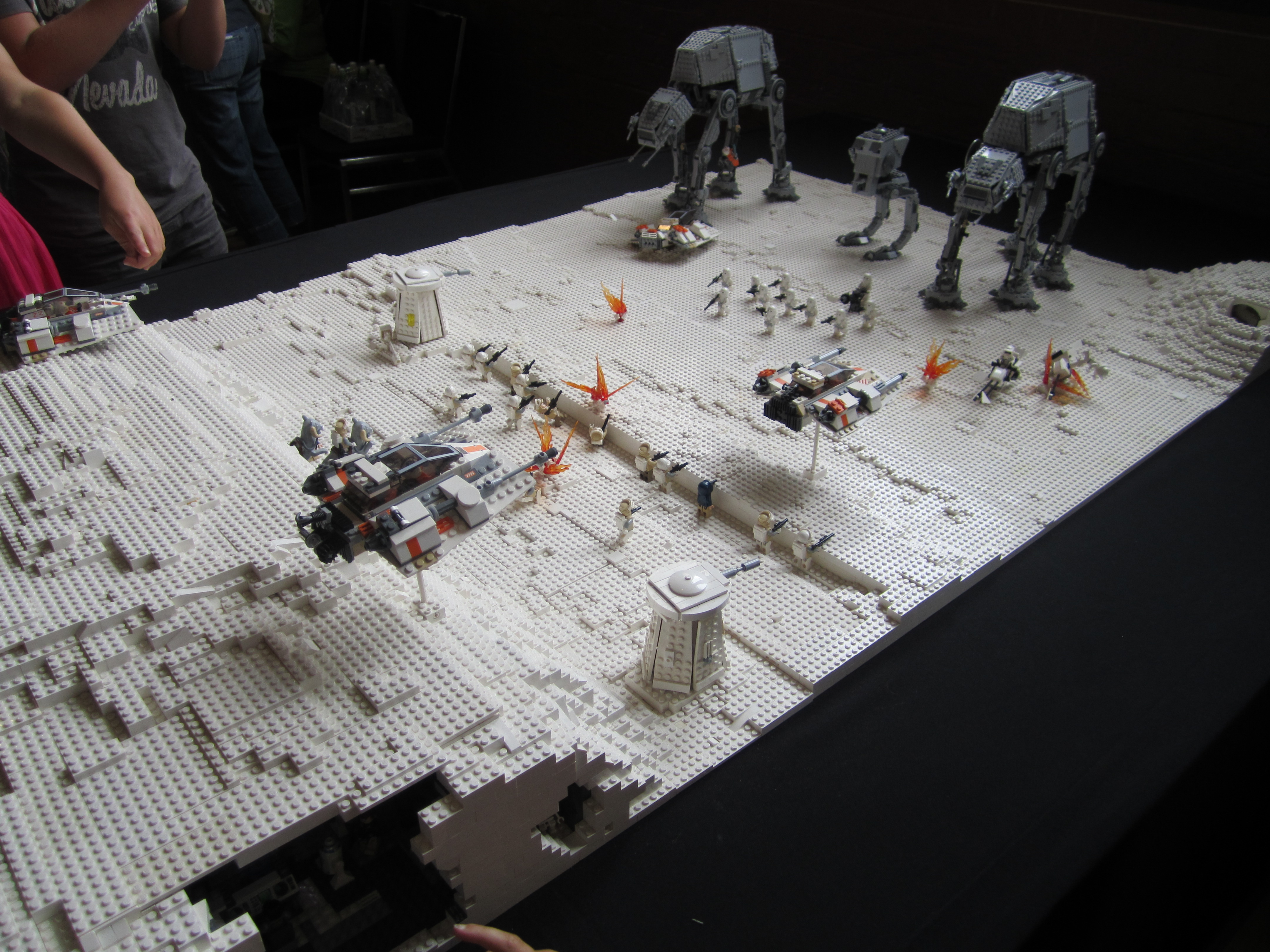 One of the better Star Wars displays. Most of the Star Wars displays were pretty much stock models built according to instructions. I’m not a huge fan of Star Wars so it wasn’t that appealing to me. Did see an UCS Millennium Falcon though which was cool. There was also a “white” version that was fashioned from Bricklink parts. 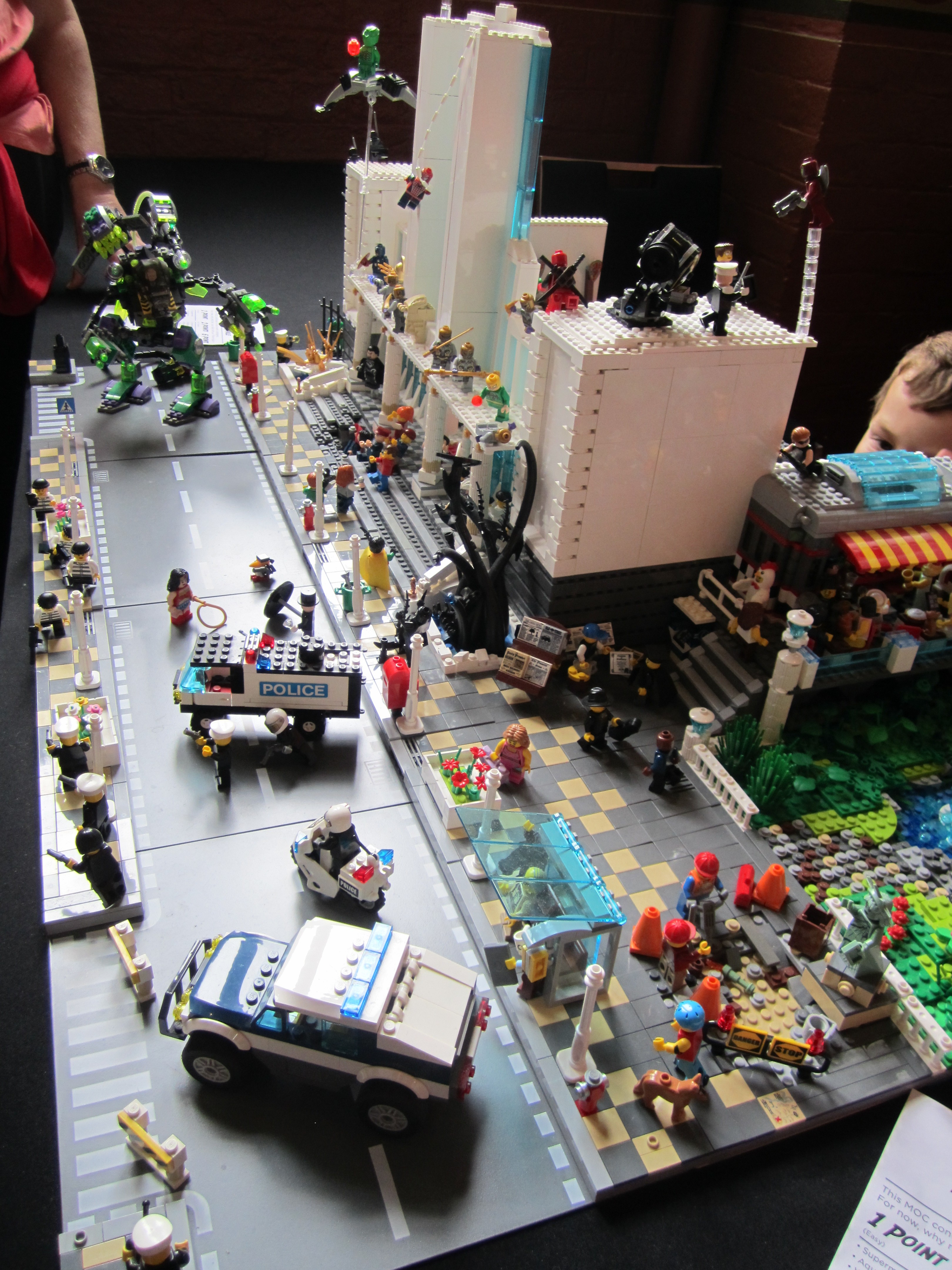 I liked this all out super heroes brawl. It featured all your favourite Marvel and DC characters and was one of the more interesting superhero themed MOCs. 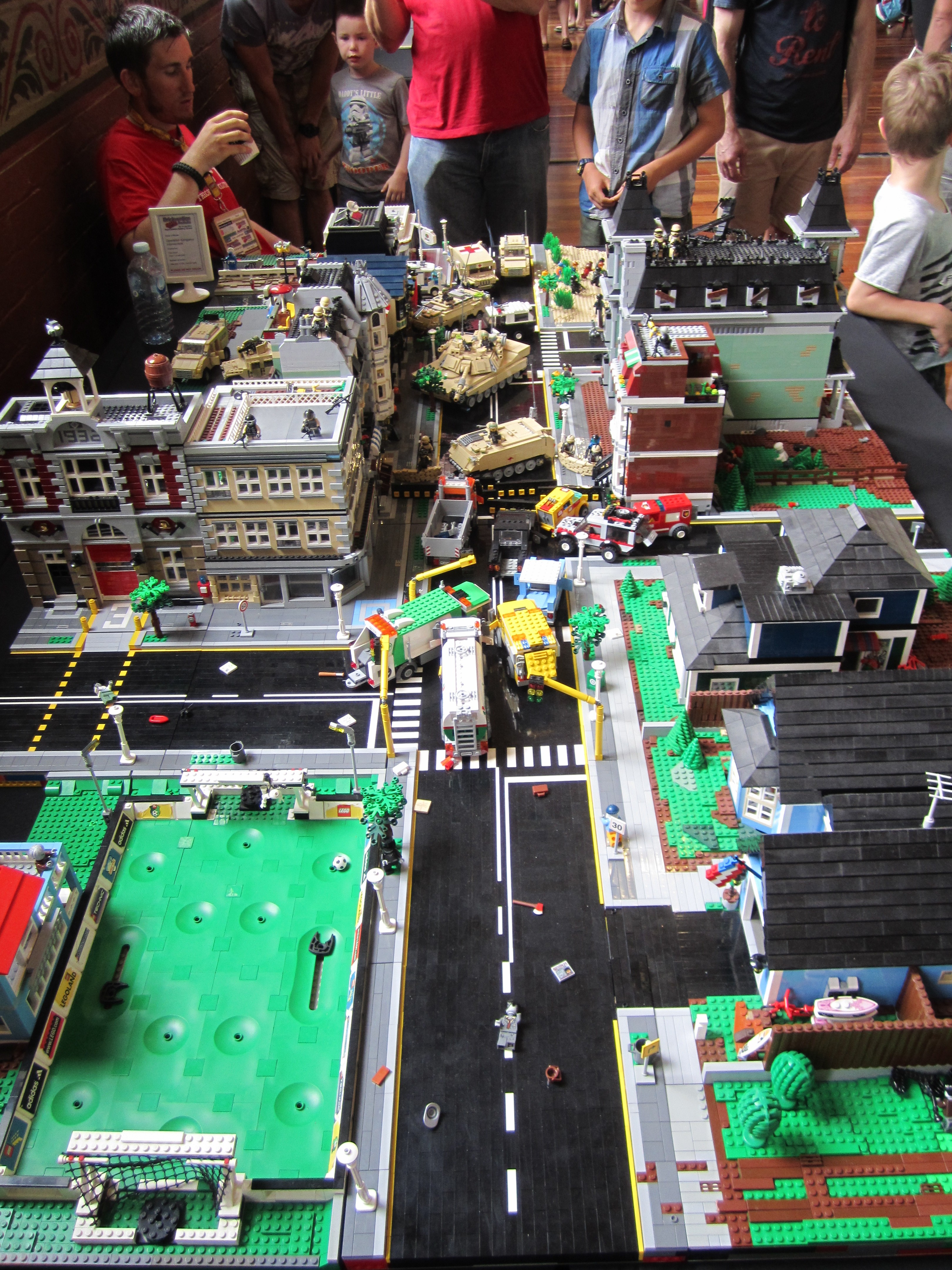 This was a pretty cool urban military scene. The tanks and military vehicles were pretty neat. This was IMPRESSIVE. A massive recreation of the Golden Gate Bridge mostly made out of Technic pieces. The sheer size of this was amazing. 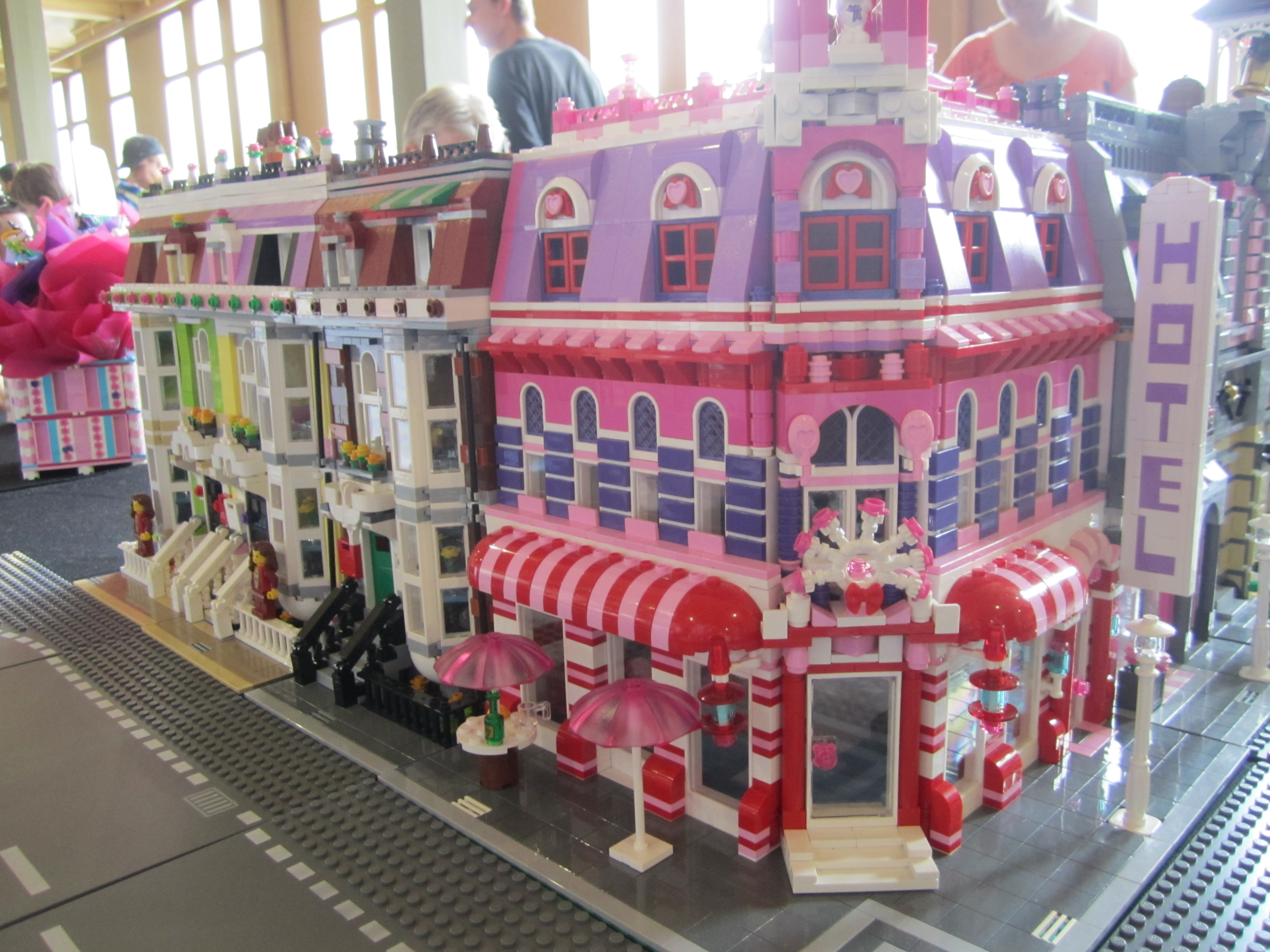 This was pretty interesting. Someone took the modular buildings and modified them using the Friends colour scheme. Not overly creative but it was nice to behold. 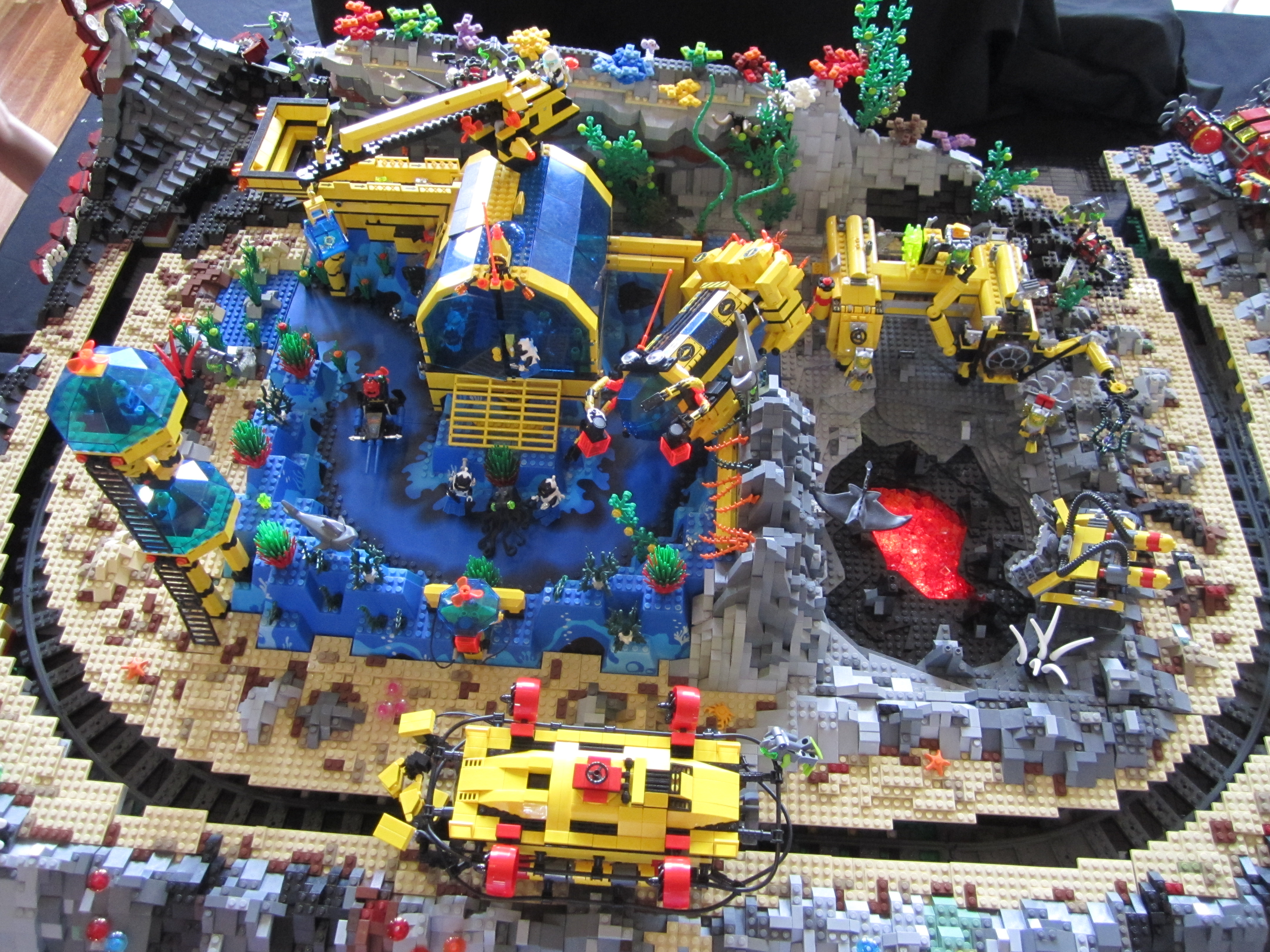 Holy Lord of Atlantis. I am a HUGE fan of the Aquazone theme, so this was perhaps one of my favourite displays at Brickvention 2014. The details weren’t overdone and it perfectly captured the look of an underwater base. 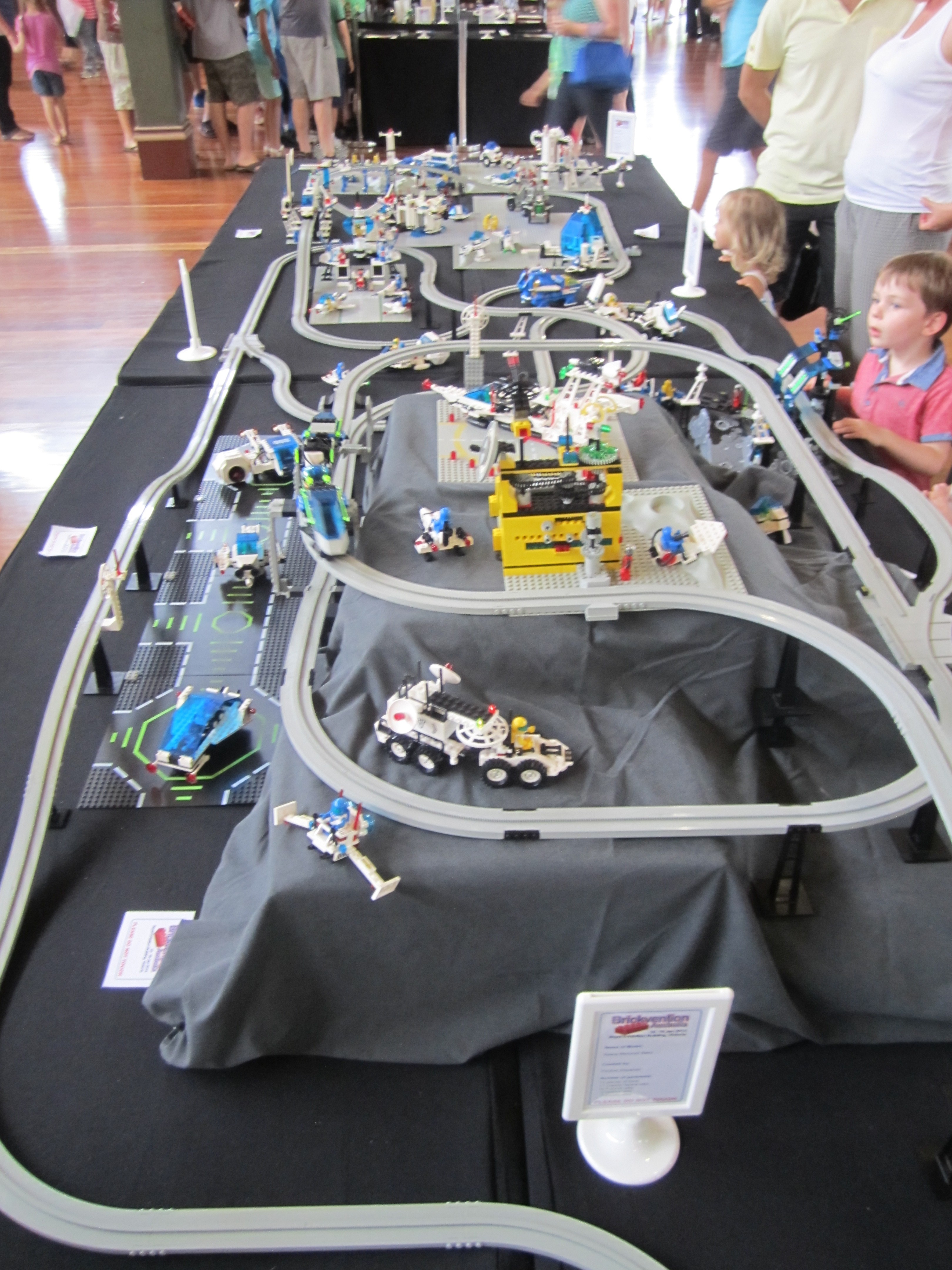 There were quite a couple of AFOLs showing off their classic space sets but this huge monorail one was one of my favourites. 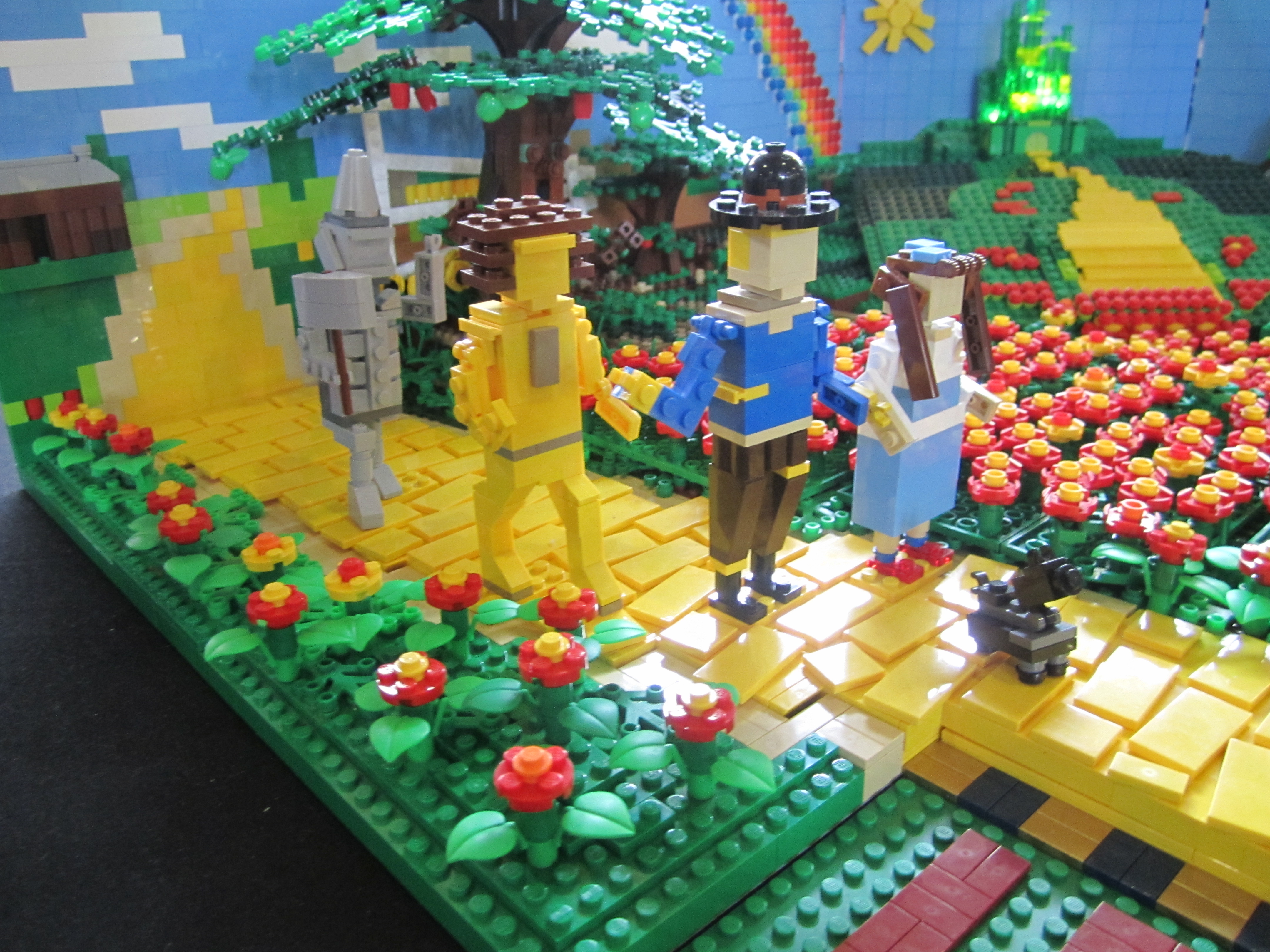 This was one of the more creative builds on display. A miniland scale Wizard of Oz scene. 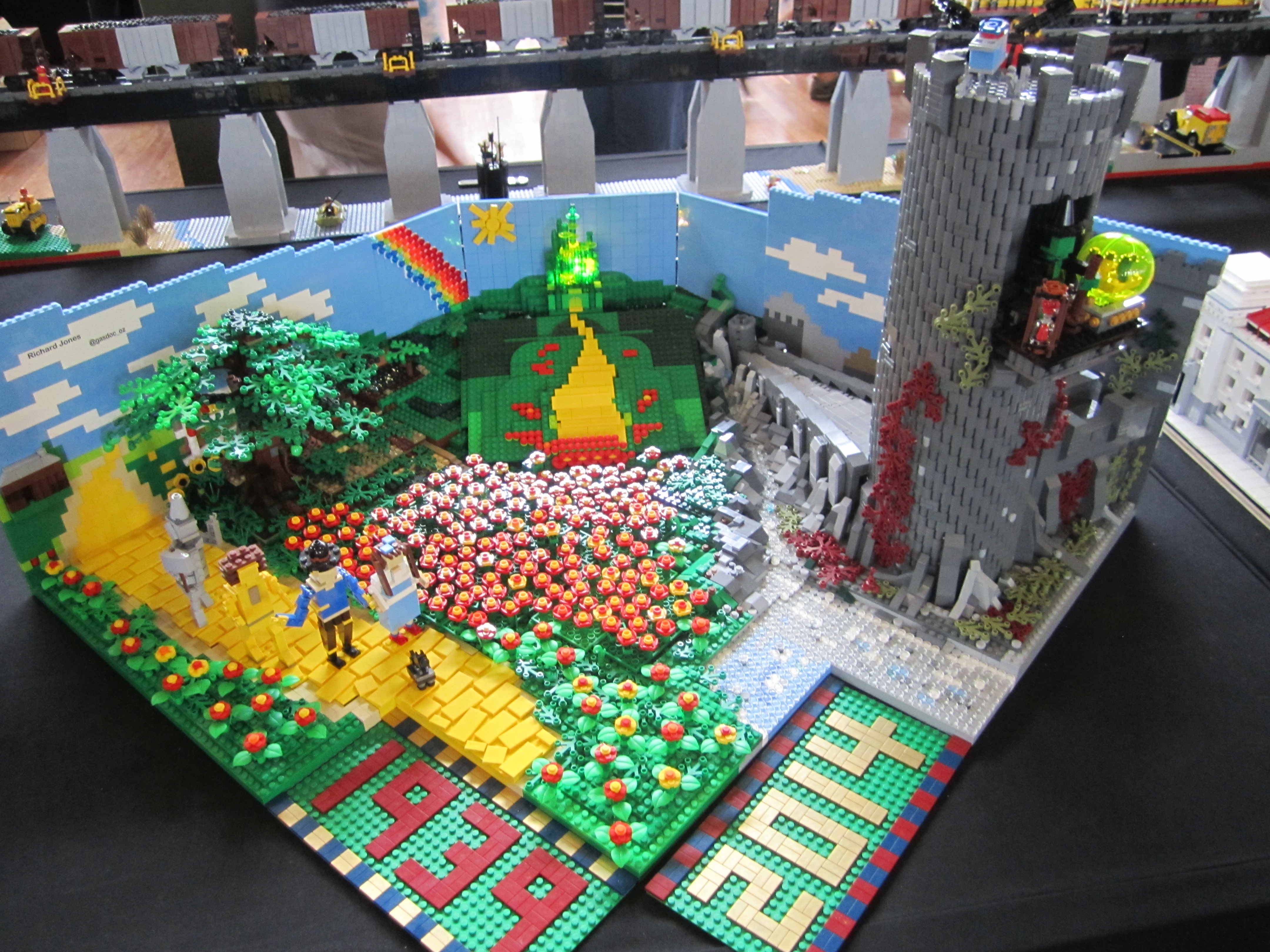 The entire scene was really cool even from afar. You can see the Emerald City in the distance as well as the reference to 1939 which is then the original movie was screened in cinemas. 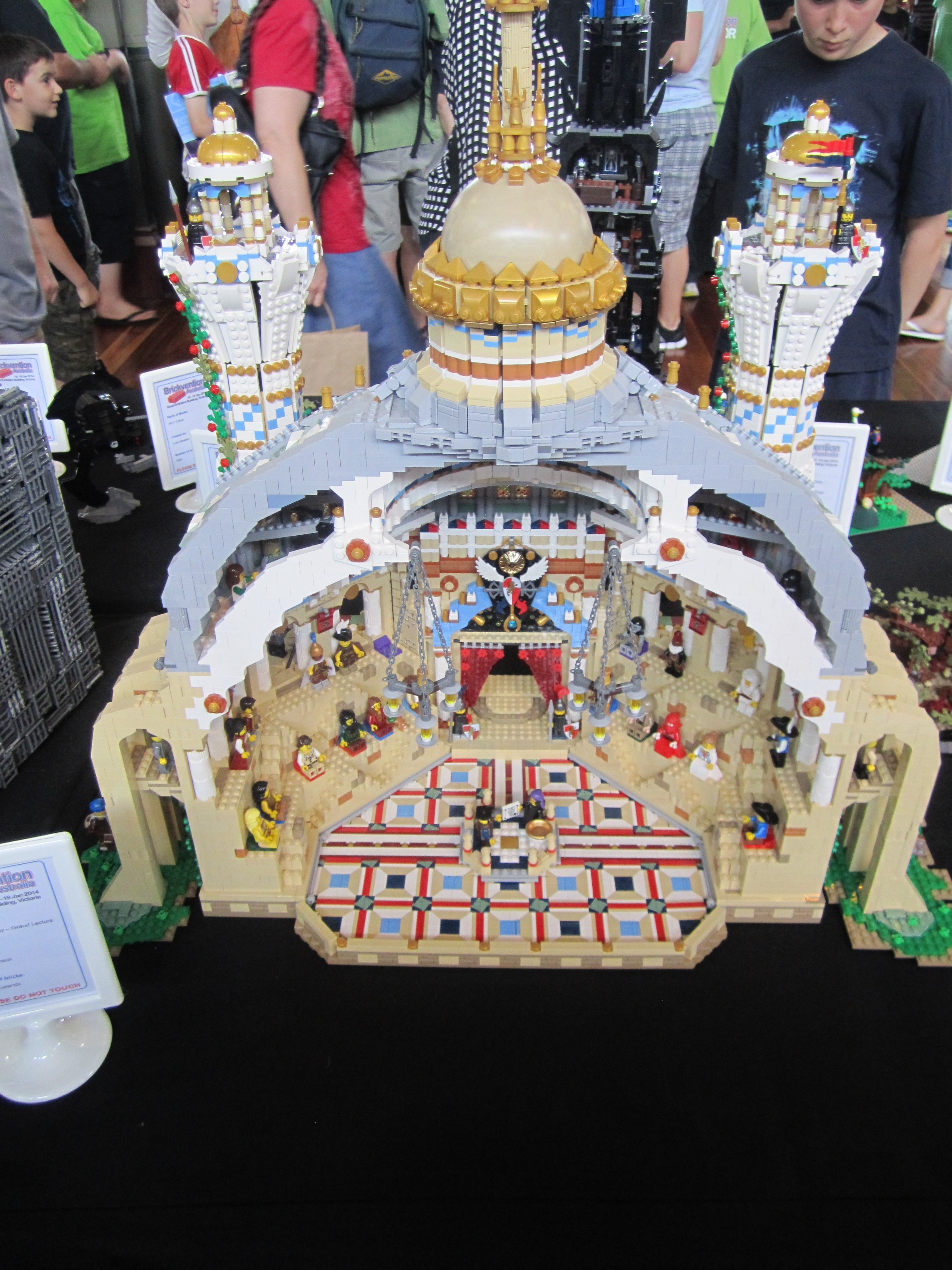 This Middle-Eastern inspired domed university was perhaps one of my favourite builds on display. Nearly every facet of it blew me away.

Here’s a close up shot showing just some of the intricate details that was incorporated into the university. I really likes the hanging lights as well as the mosaic floor. 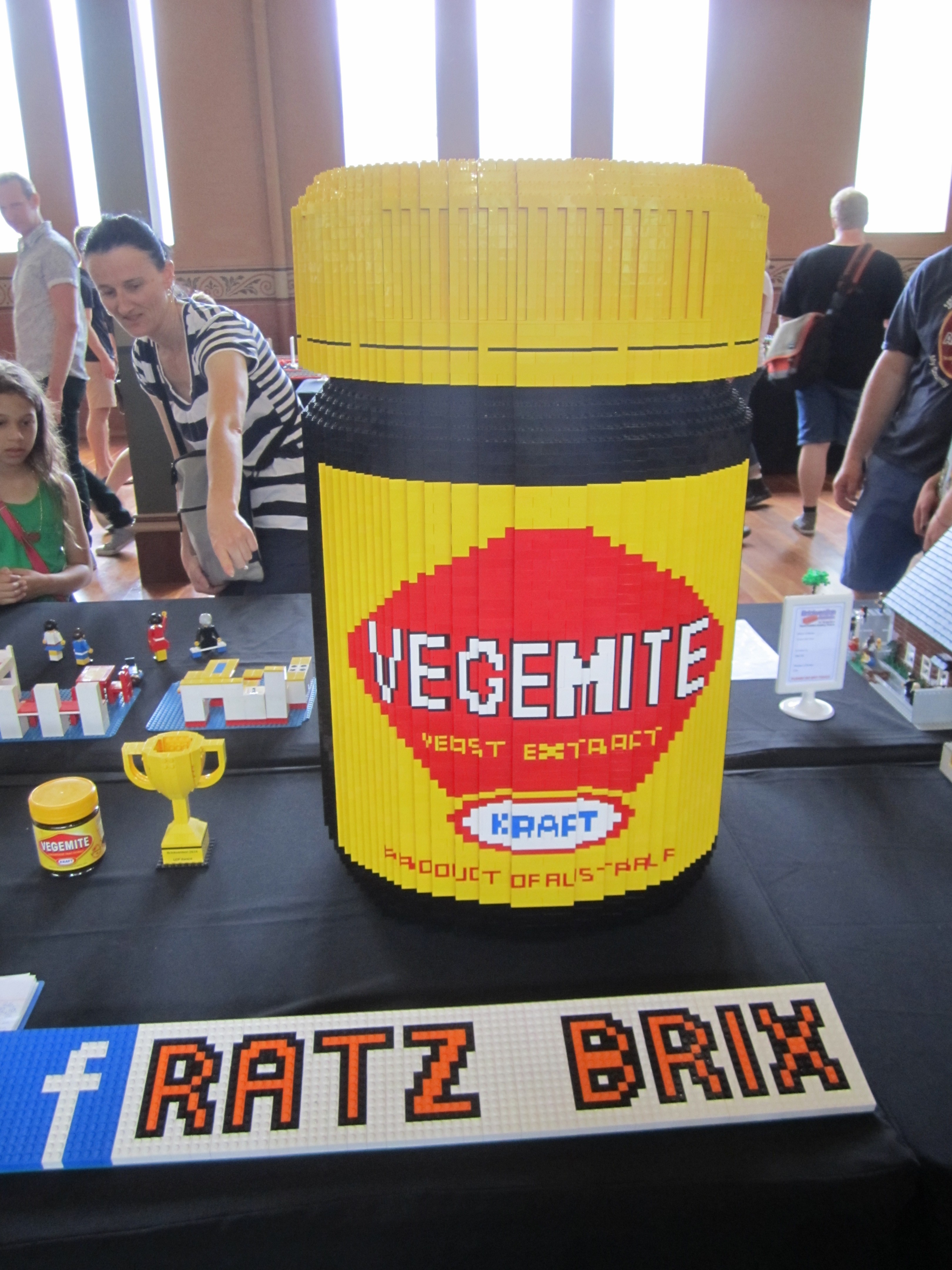 It wouldn’t be an Australian AFOL convention without a brick built Australian icon – in this case a massive jar of Vegemite! A real jar of Vegemite can be seen in the lower left hand corner which let’s you see just how huge the brick Vegemite jar is.

This pink mansion stood out from all the other creations as well. Not just due to the colour scheme but I really enjoyed the courtyard and what seems to be Cinderella pulling up in a carriage. 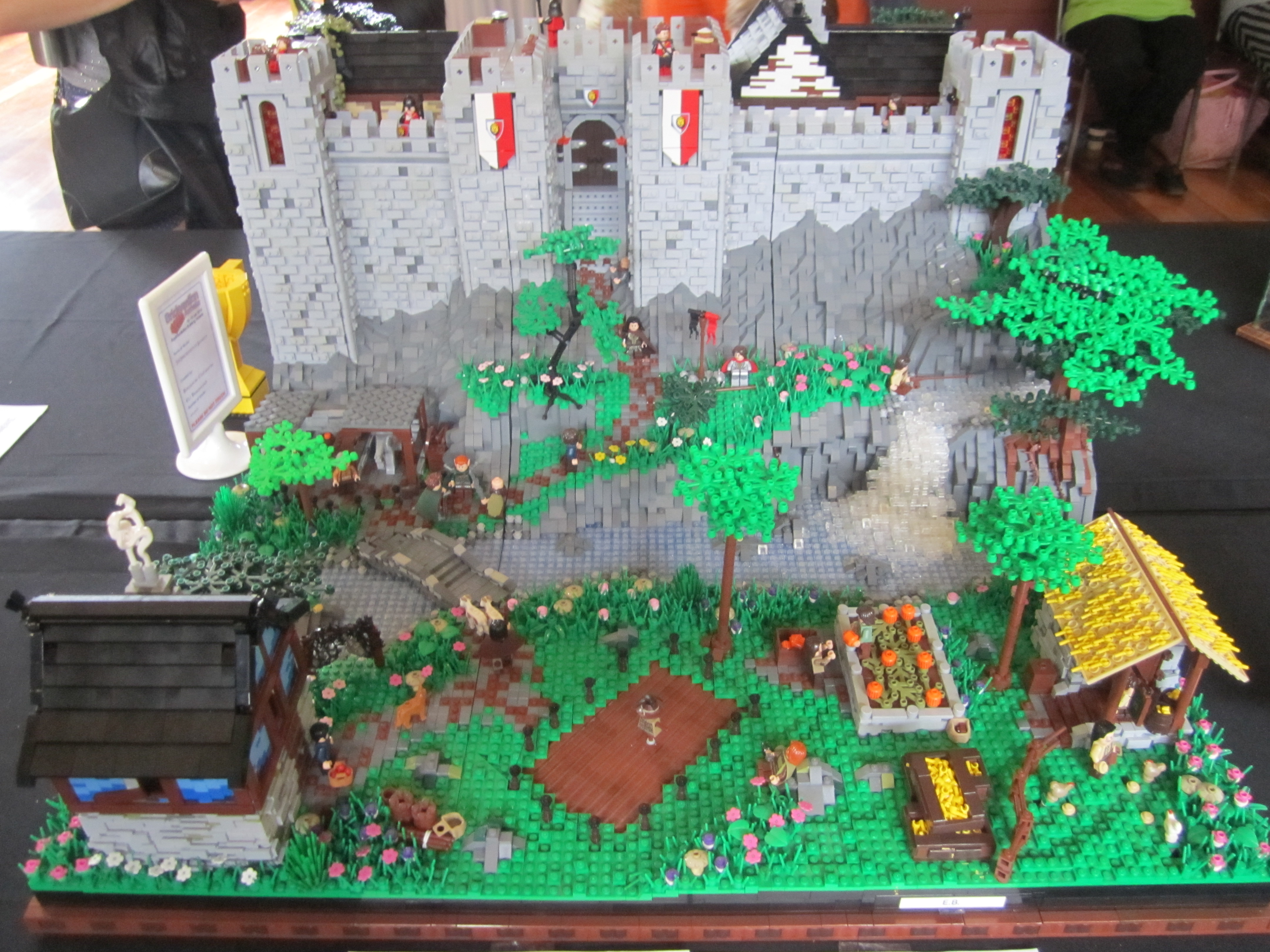 There were a number of castle type creations on display but this one edged the others out. It had a very intimidating and impressive facade as well as a lot of smaller details built into it. 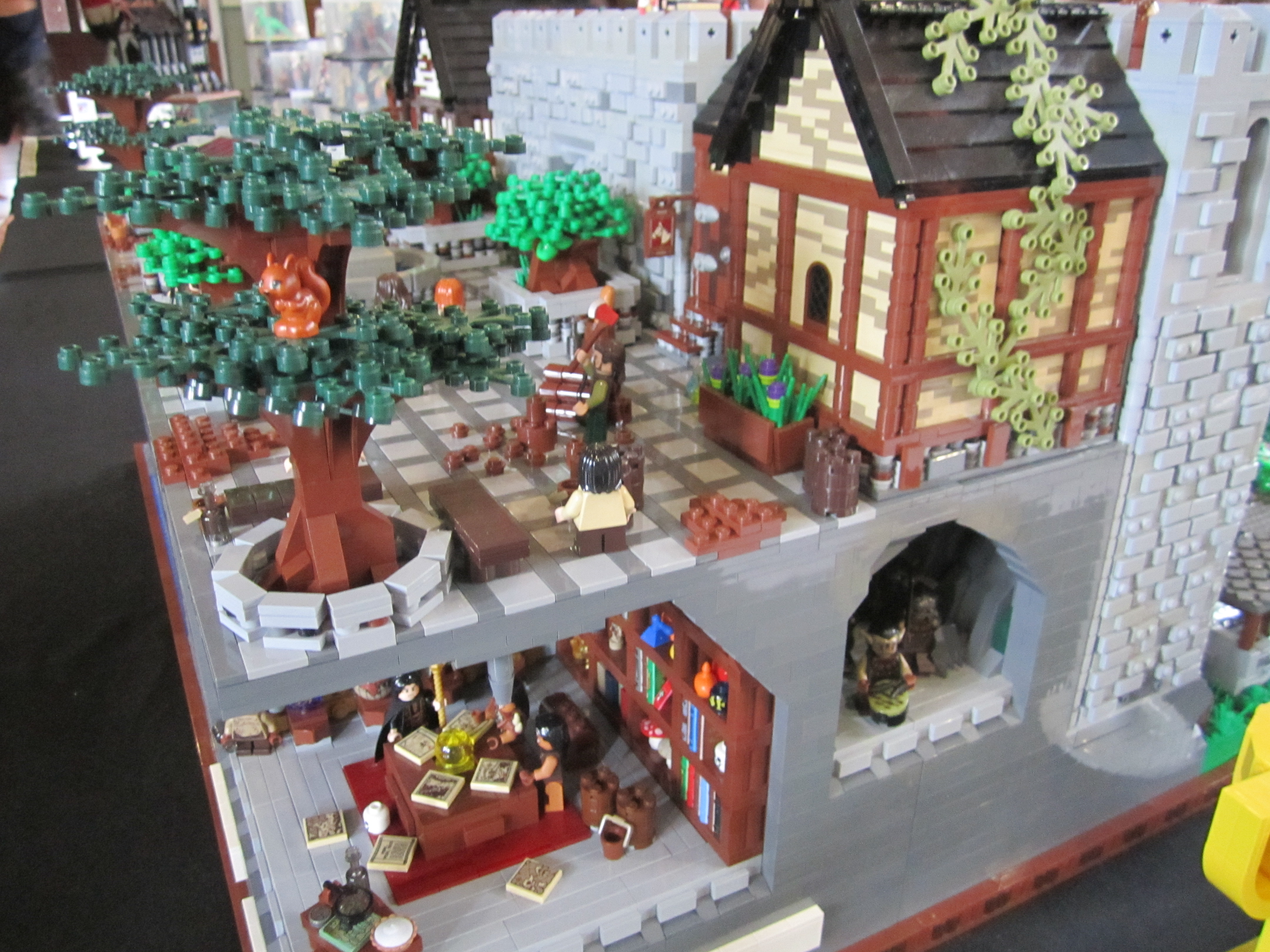 There was a little town going on behind the castle walls, which I liked. 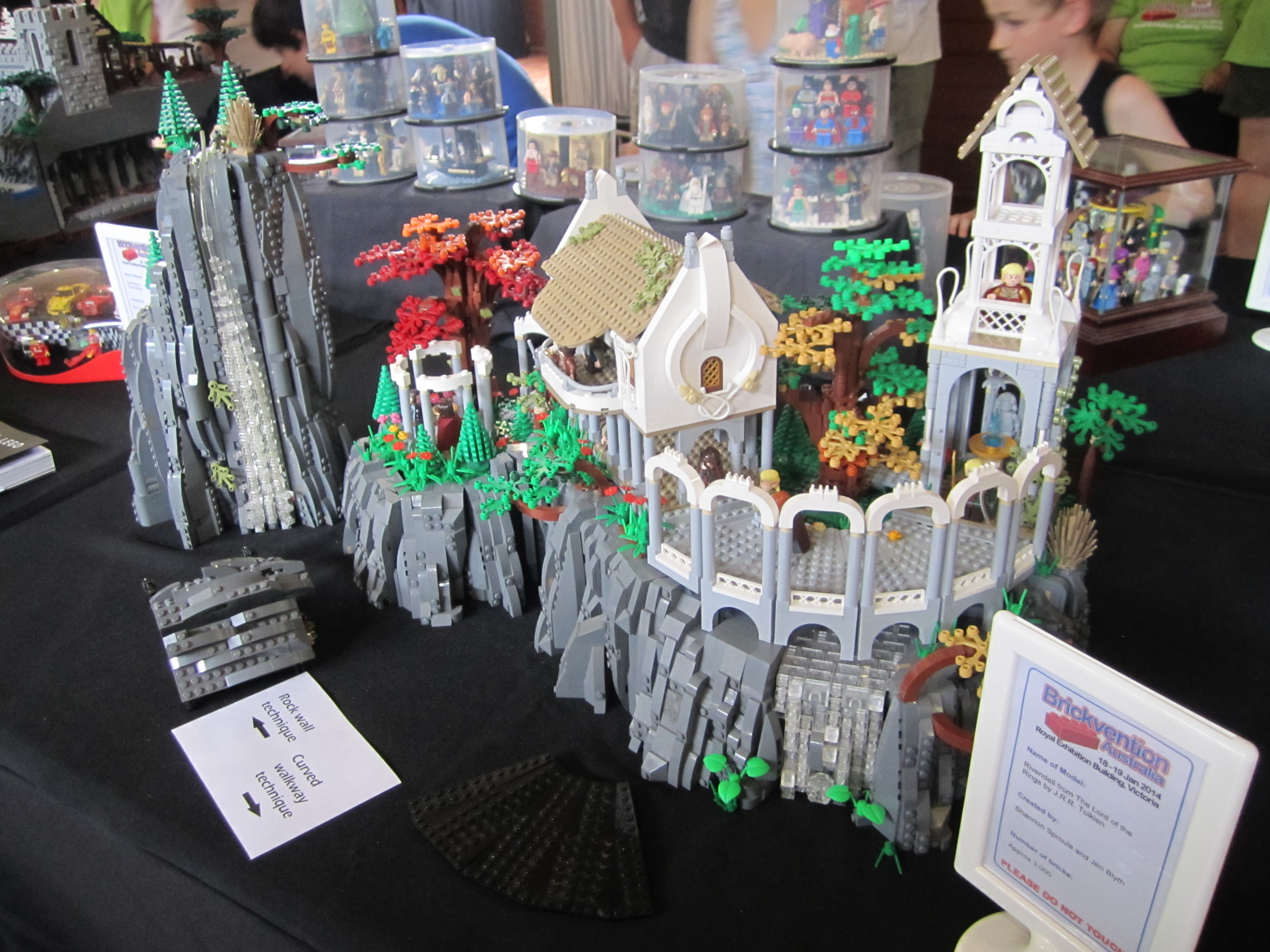 I was very pleased that there were a number of very high quality Lord of the Rings creations on display. I particularly liked the overall design of this recreation of Rivendell. Simple enough yet retaining a lot of neat little details. 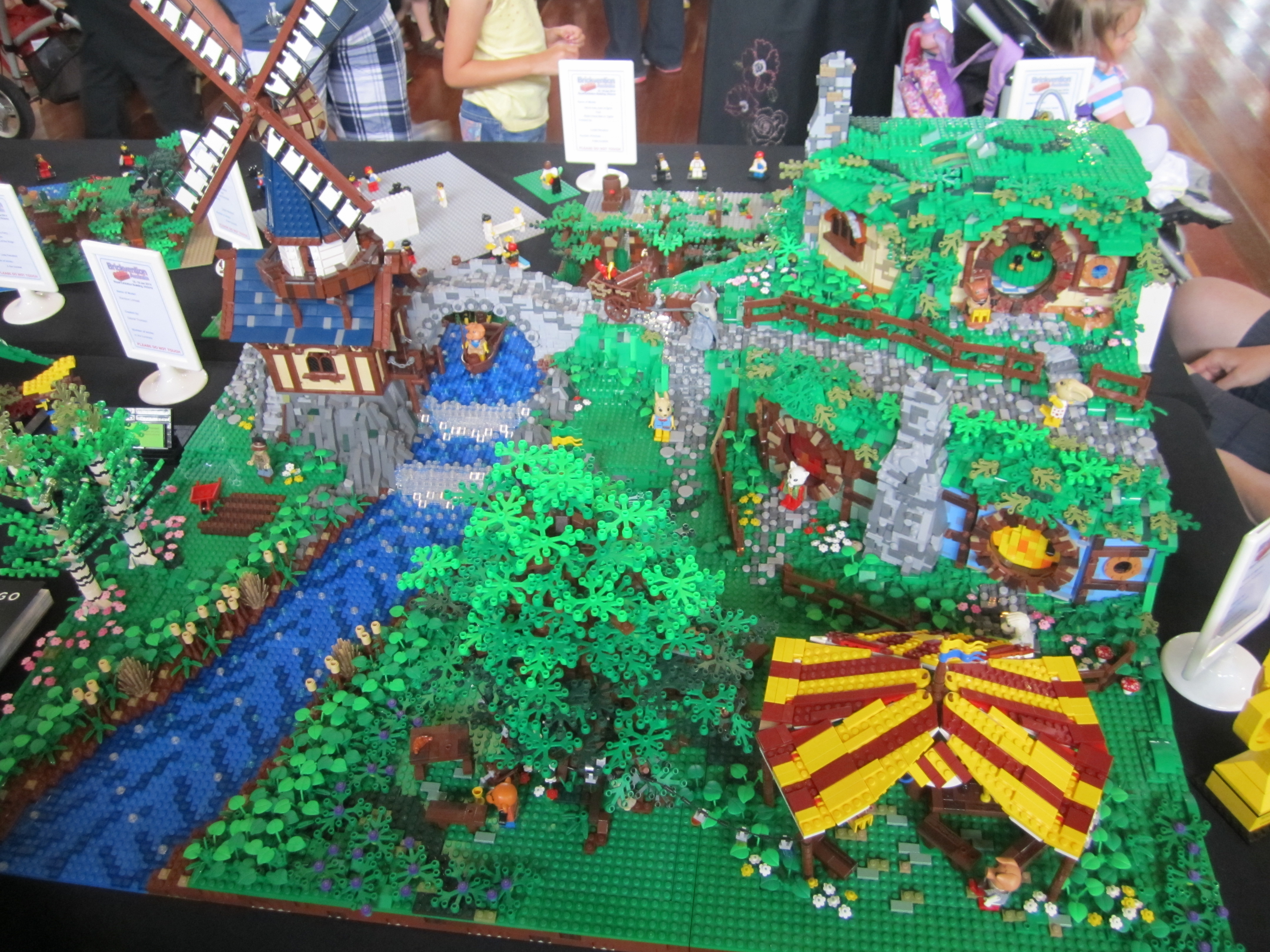 Here’s The Shire but instead of it being populated by Hobbits, it seems like the residents of Fabuland have taken over. 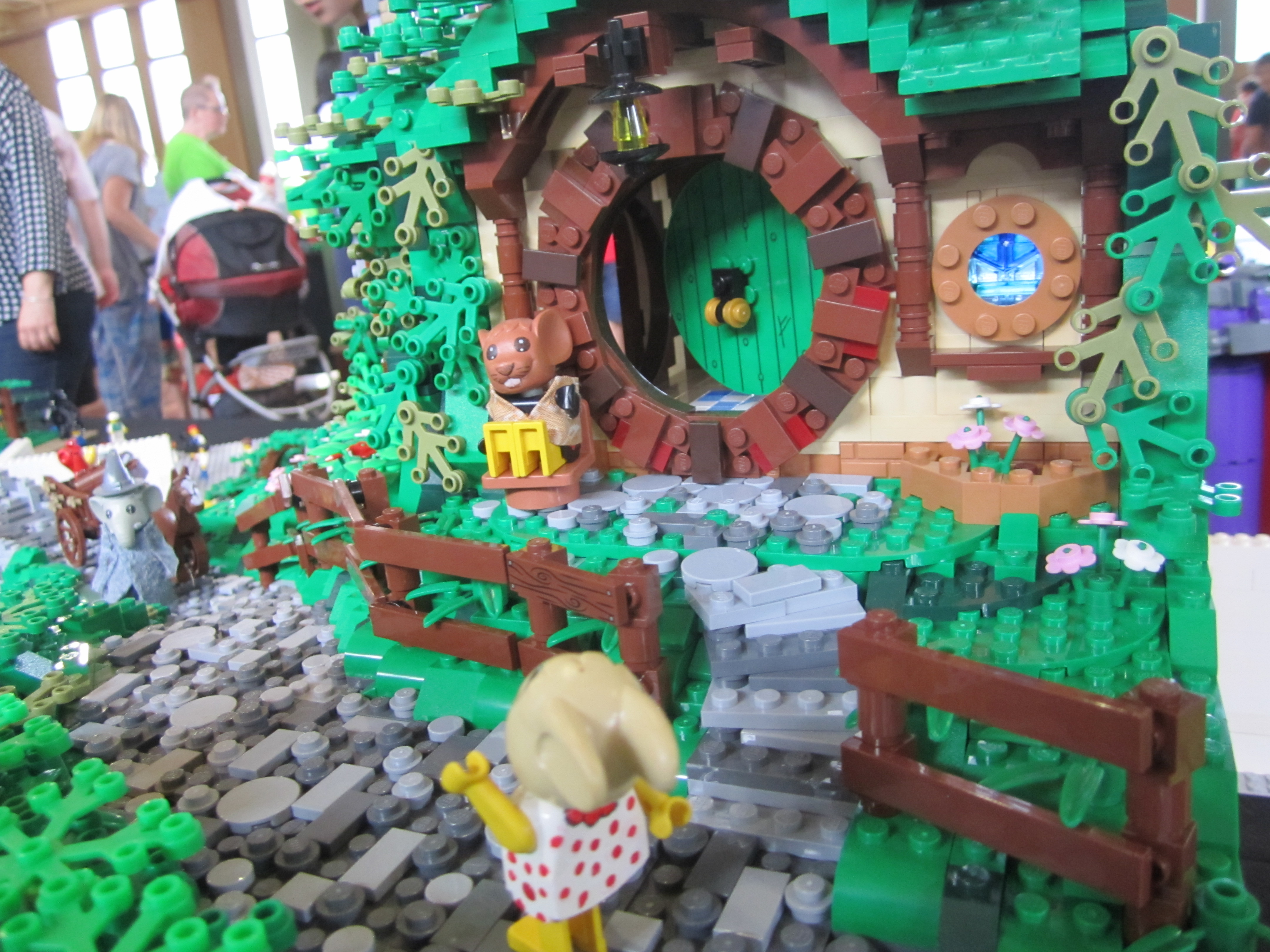 Really cute use of Fabuland minifigs instead of Hobbits! 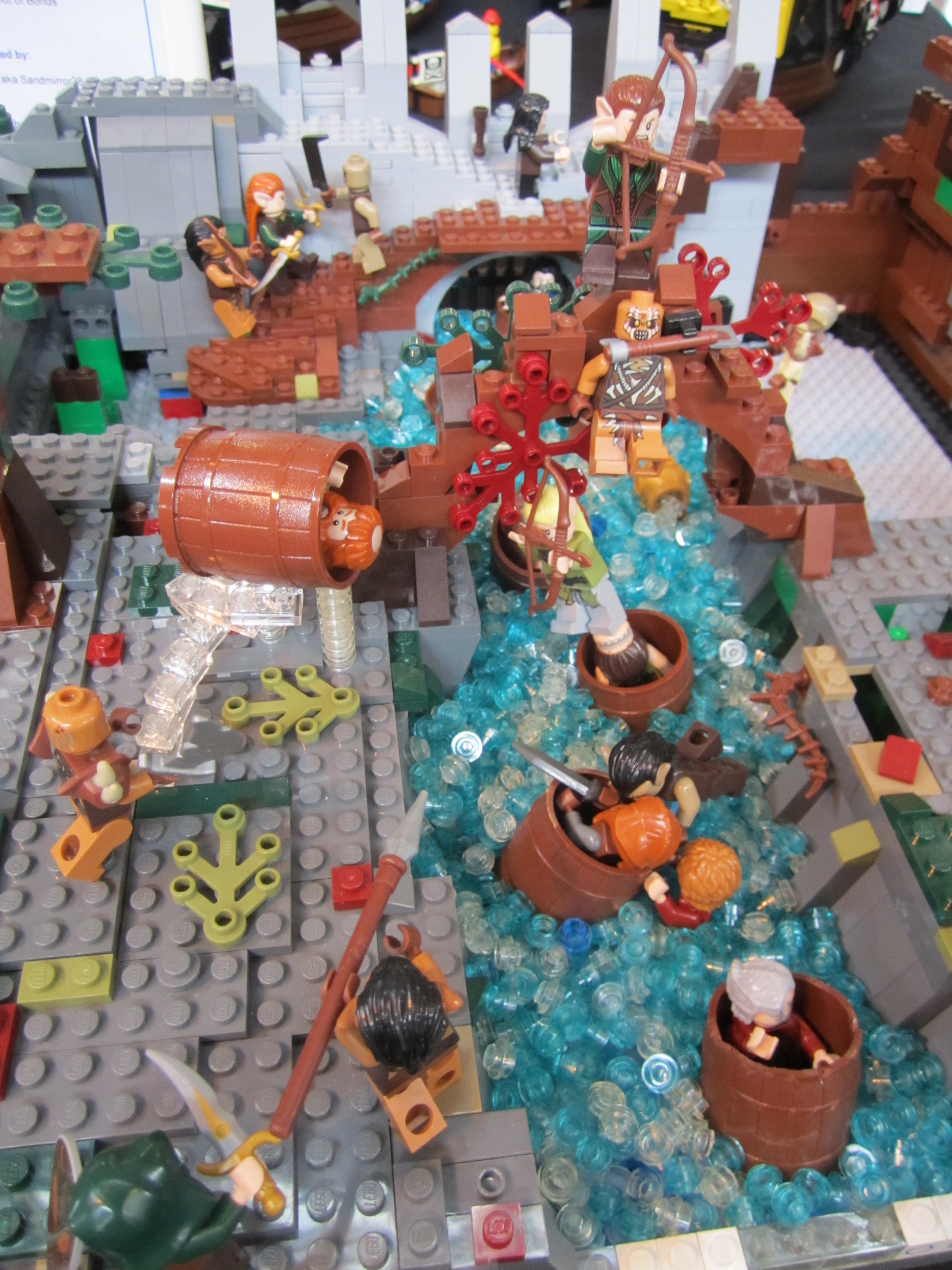 Another incredible creation – a very accurate rendition of “Barrel out of Bonds” from the latest Hobbit movie, The Desolation of Smaug. 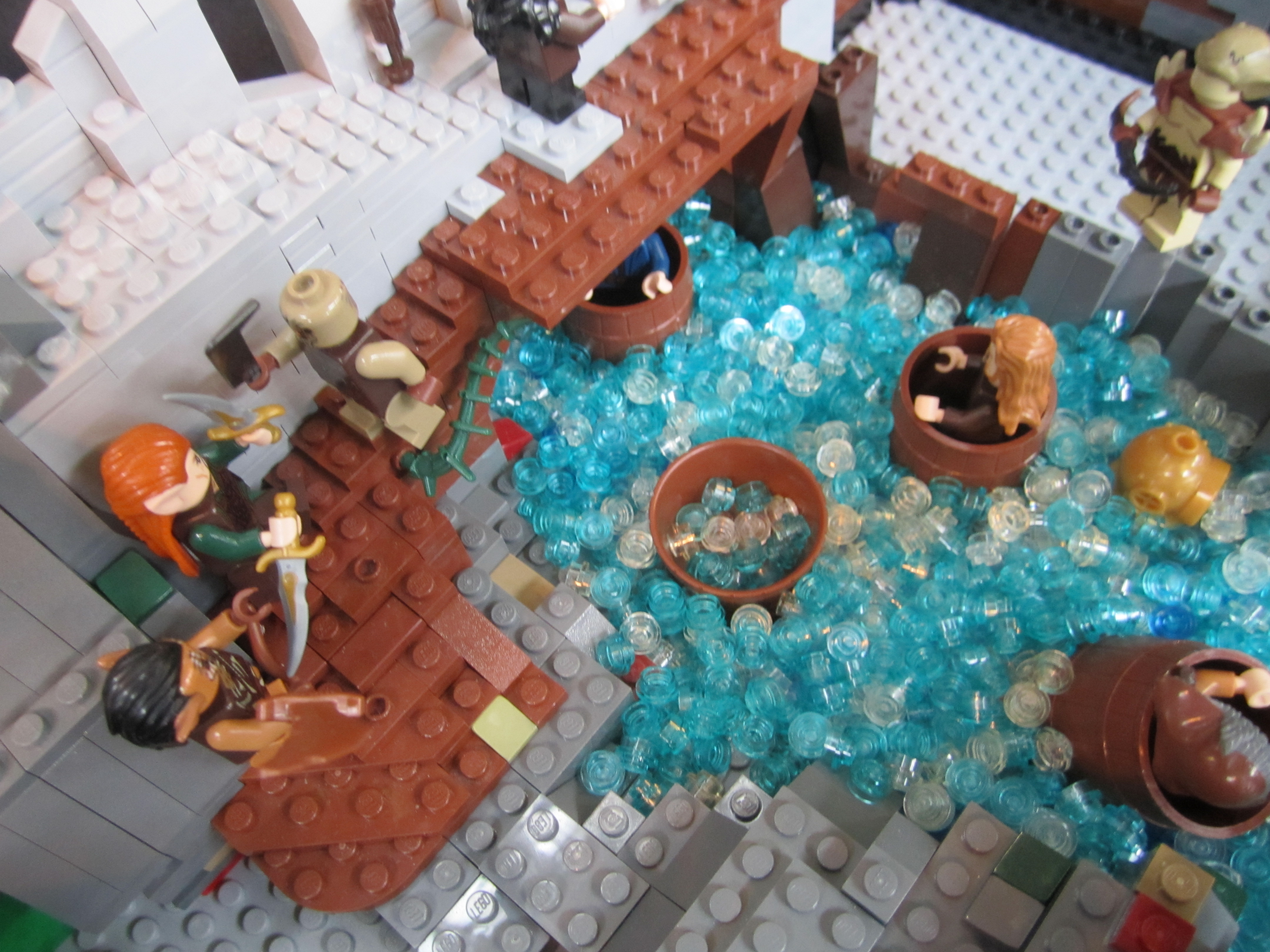 The builder put a lot of effort into fitting in a lot of tiny details that were present during the scene, which was arguably one of the most memorable scenes in the movie. 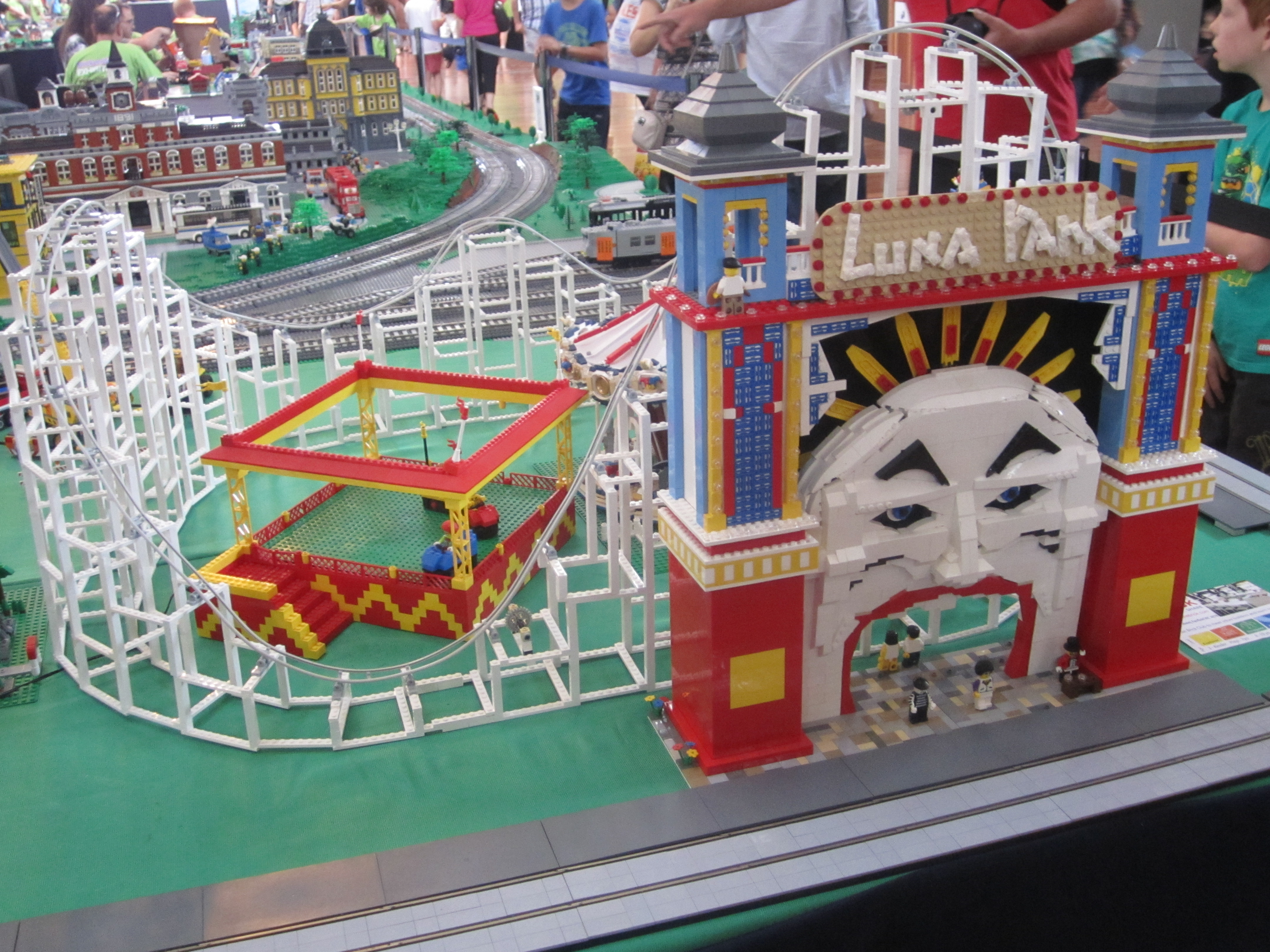 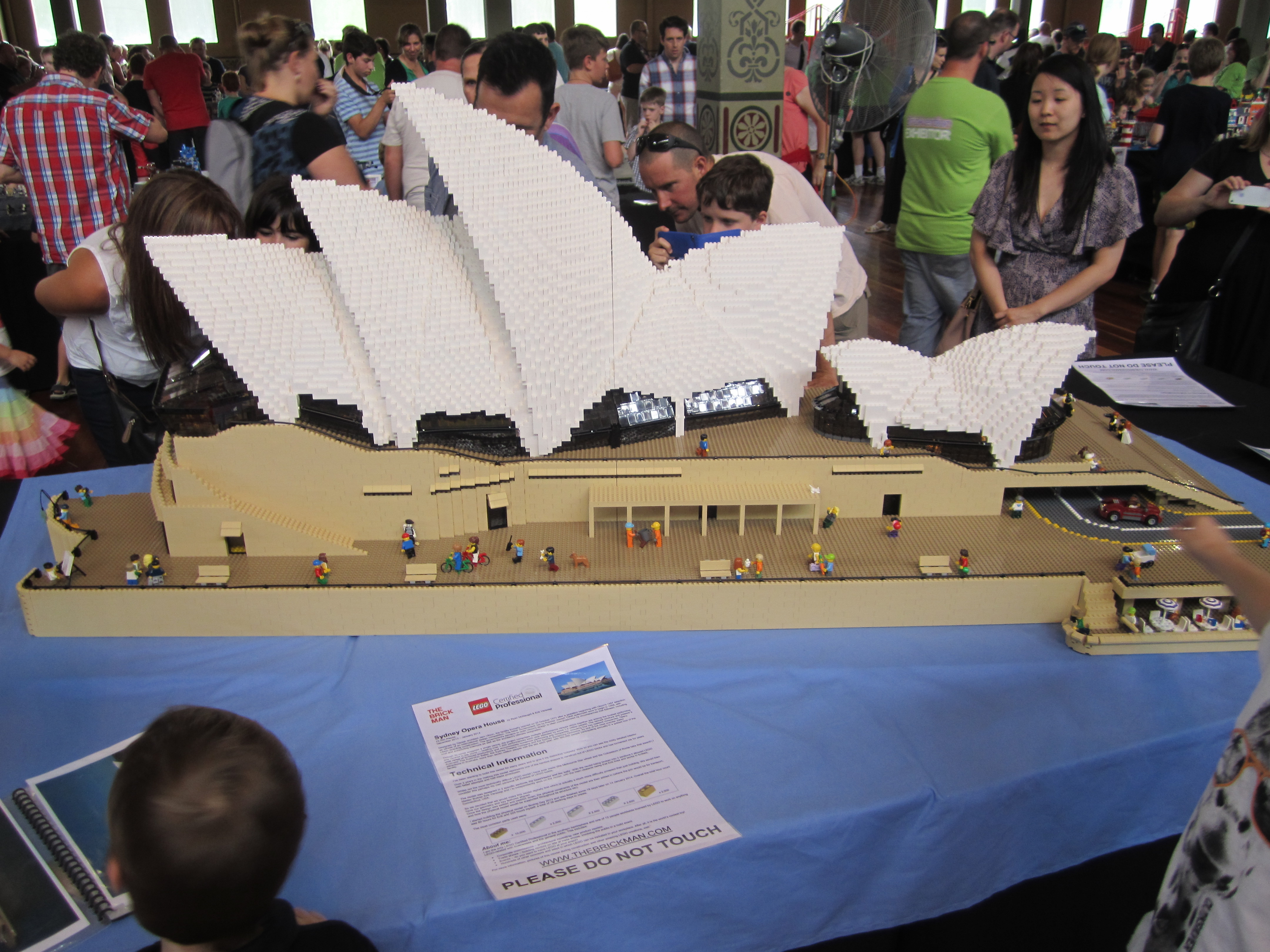 And now for my favourite build on display, a cross section of the Opera House, built by none other than Ryan Mcnaught aka The Brickman.

For the uninitiated, Ryan is Australia’s only LEGO Certified Professional Builder, which pretty much means that he gets paid to build and design these amazing creations. 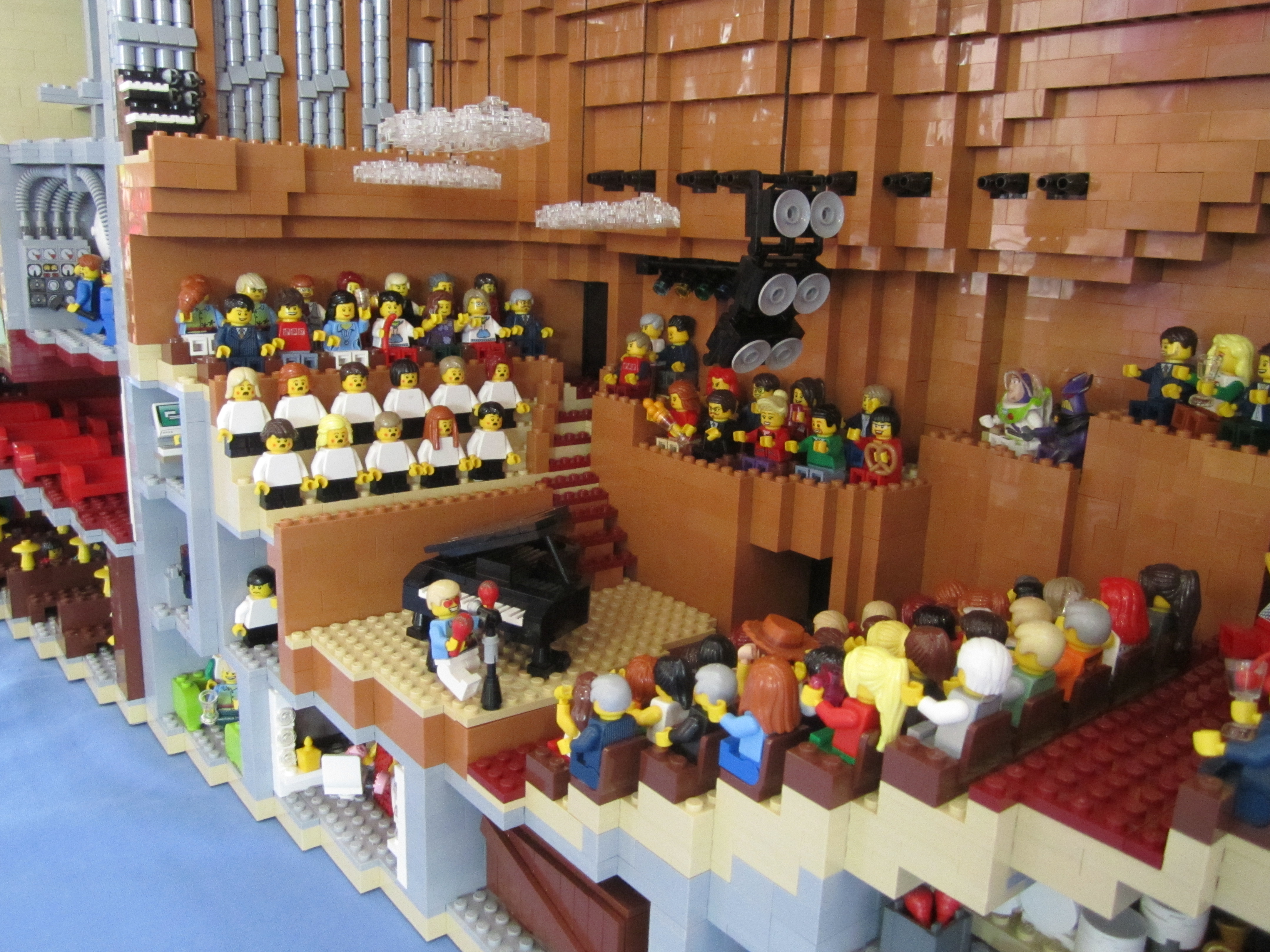 I actually got an opportunity to meet him in person for the first time and chat with him. He was incredibly friendly and you could tell that he’s truly passionate about what he does. 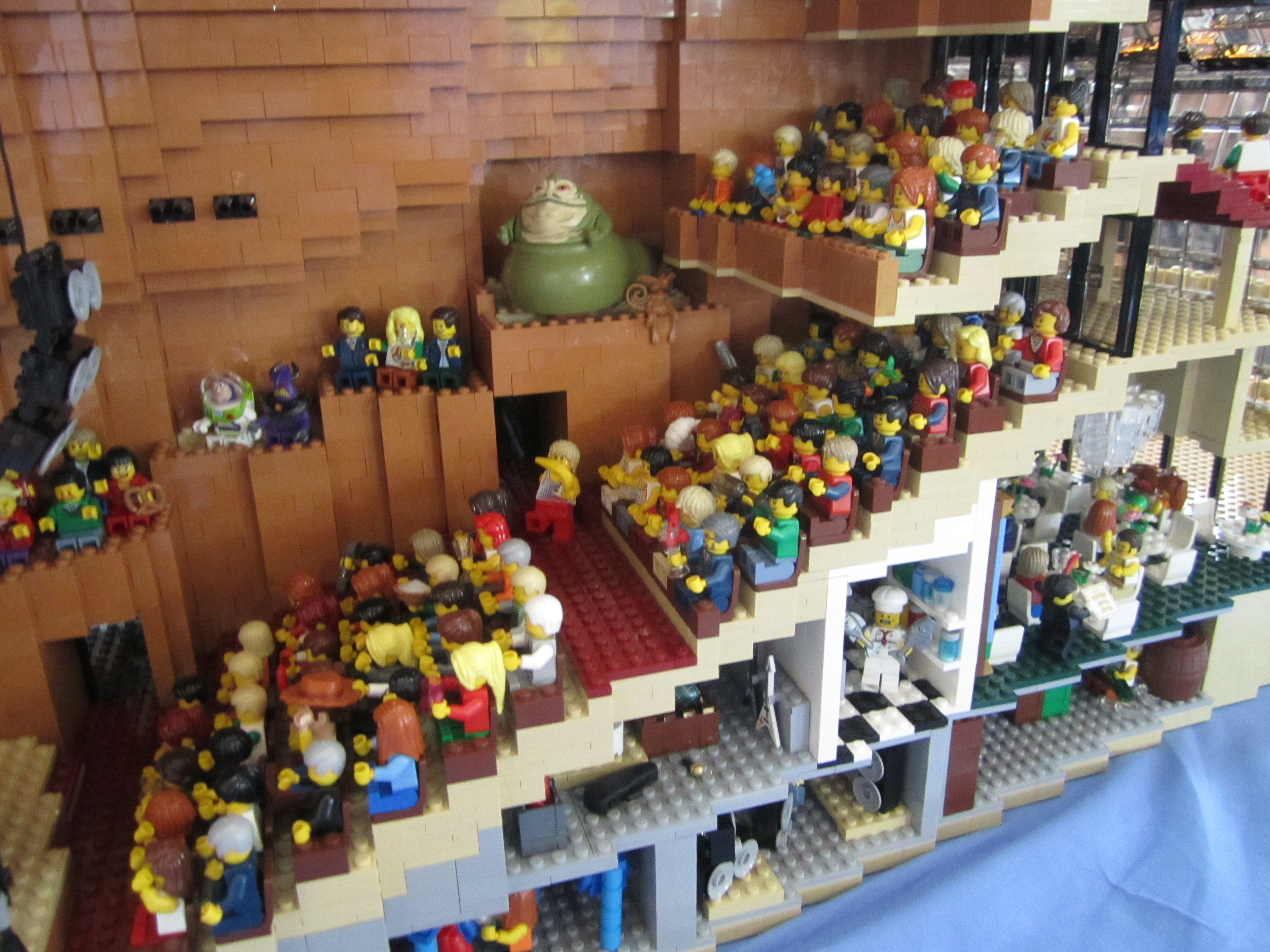 The Opera House was made out of over 75,000 bricks and was packed with all sorts of fun little details. I especially like the characters that were in the auditorium – see if you can spot Jabba the Hutt and Buzz Lightyear and Emperor Zurg sharing a father-son moment. Lots of little rooms were built into the Opera House, each with minifigs up to their own business. The level of detail that went into this was just jaw dropping. Ryan said he had a really good time putting it together. 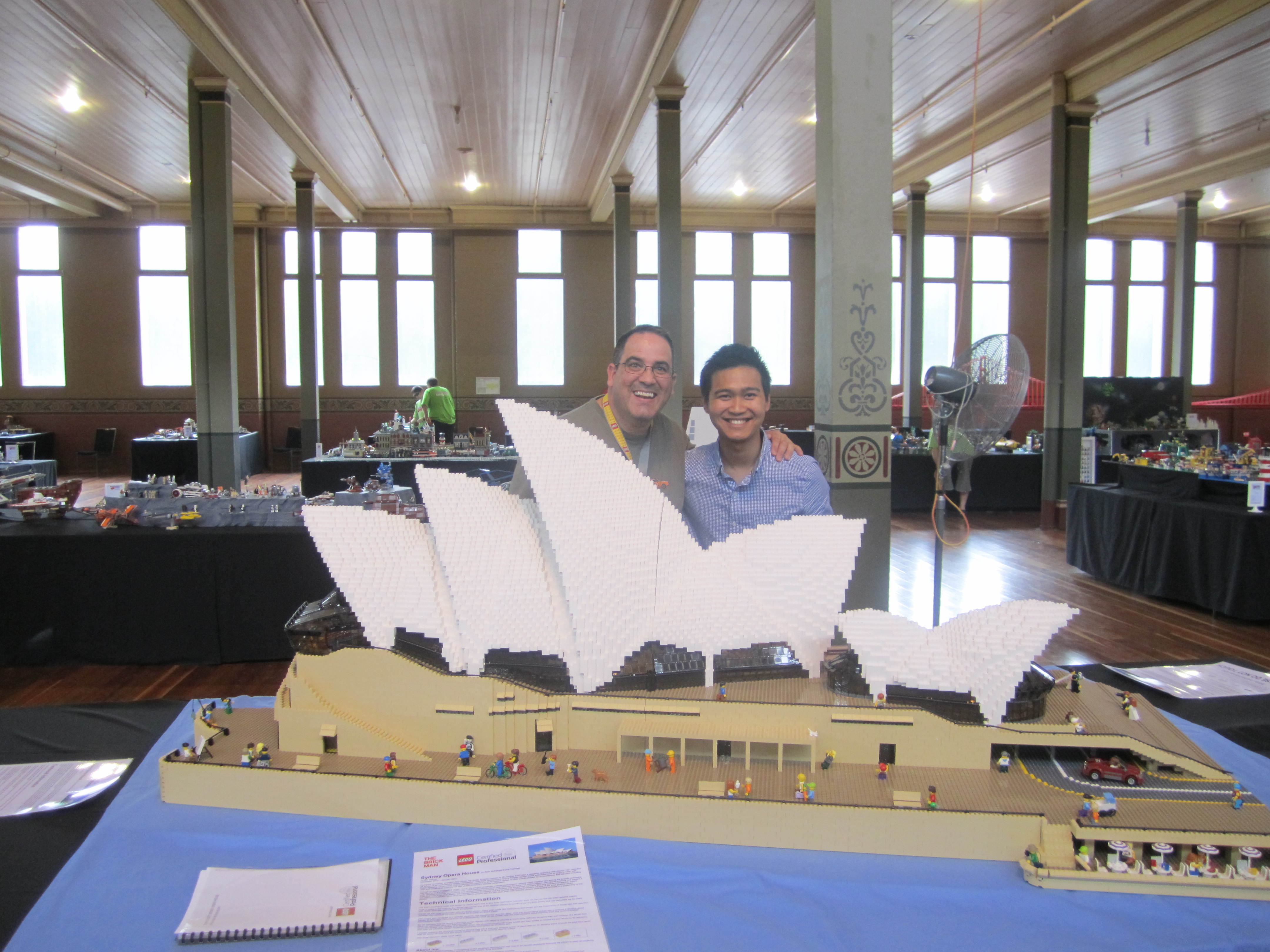 Here’s a picture of me and Ryan in front of the Opera House!

Brickvention was a huge load of fun. Definitely looking forward to going again next year. I spent about 2 hours there and to be honest, it wasn’t enough. I could’ve easily spent the whole day there.

If you’re a LEGO fan in Melbourne, I highly recommend trying to make next year’s convention!

I took a lot more pictures of the LEGO builds on display which you can find on my blog’s Facebook page here. Enjoy!