So, I found out via the grapevine and Toys ‘R’ Us Malaysia’s Facebook page that a mysterious new Lego store was opening in Bangsar Village 2 this week so I HAD to check it out. I had a fortuitous early end to my work day and managed to scoot off to Bangsar to see what it was all about. Details were scant on TRU’s Facebook page. Could it be that we’re finally getting a proper Lego store (not even close) or would there be some cool sets that would be exclusive to it? Cheaper prices? Nope. Not even close.

Edit: Apparently, they’ve corrected the pricing for the Seaside House and reverted back to its RRP.

Oh, by the way, they also had the new Summer sets (Friends, City (Mining) and Star Wars, Ninjago) which was cool. Except for the prices *shudder*

The new Toys ‘R’ Us Lego store can be found on Level 2, Bangsar Village II. Apparently, according to my friend Timothy, it’s only a temporary store and will last only 2 months. He speculates that it’s to test the local market to see if it would be receptive to a proper Lego store. Oh well. I guess we gotta wait till September to see what Legoland offers, cause this one is pretty pointless for serious Lego buyers.

(pardon the grainy pictures, I only had my cell phone with me at the time) 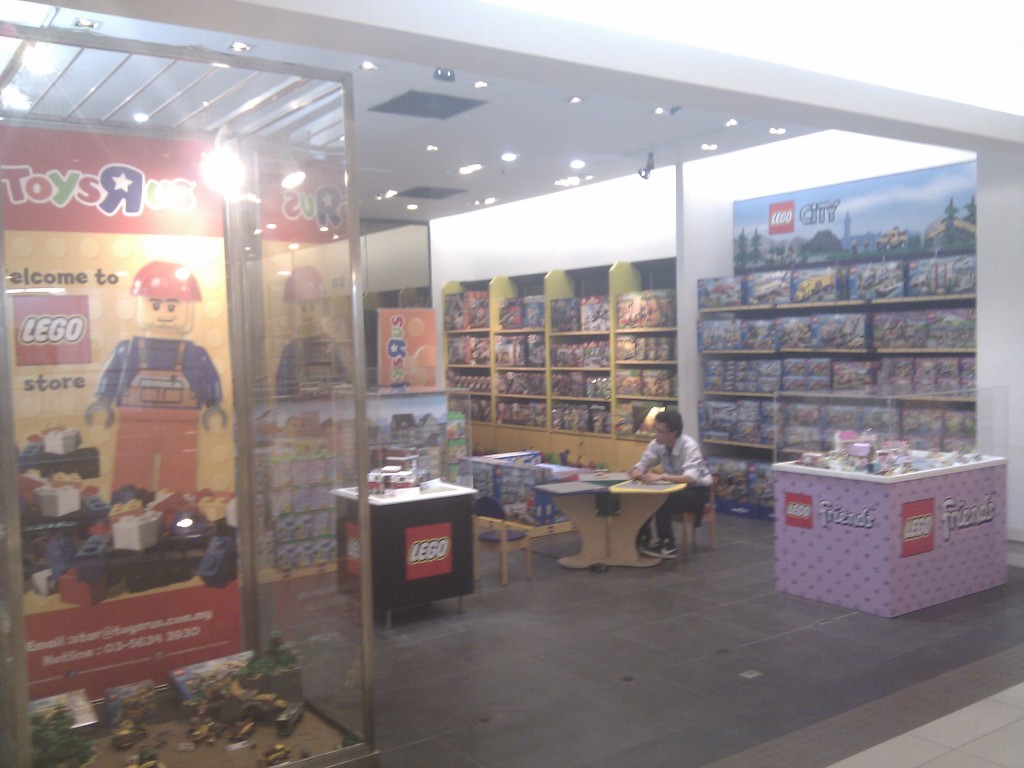 To cut to the chase, it’s simply an empty shop lot Toys ‘R’ Us leased dedicated exclusively to Lego products. That’s it. Still the same disgusting prices that we Malaysians are forced to endure when purchasing Lego. 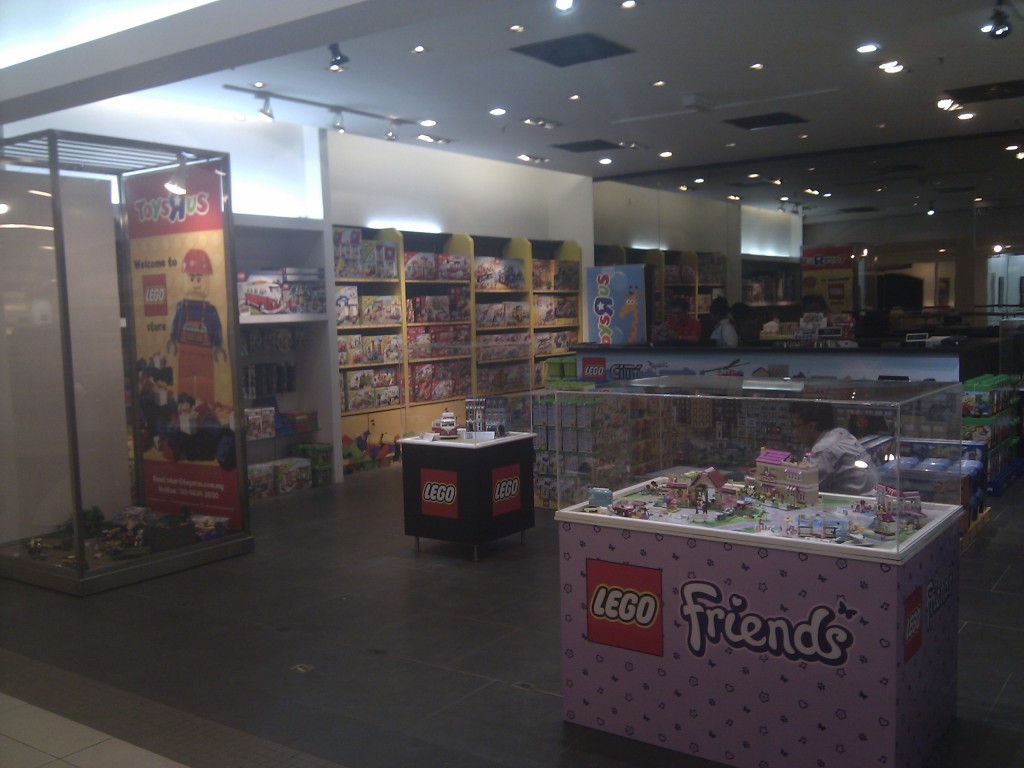 It’s actually a pretty decent shop. It’s nice walking into a shop that has shelves stacked to the brim with Lego boxes. The displays are alright too. Gotta say, the customer service was fantastic. The Toys ‘R’ Us staff on hand were very friendly and helpful 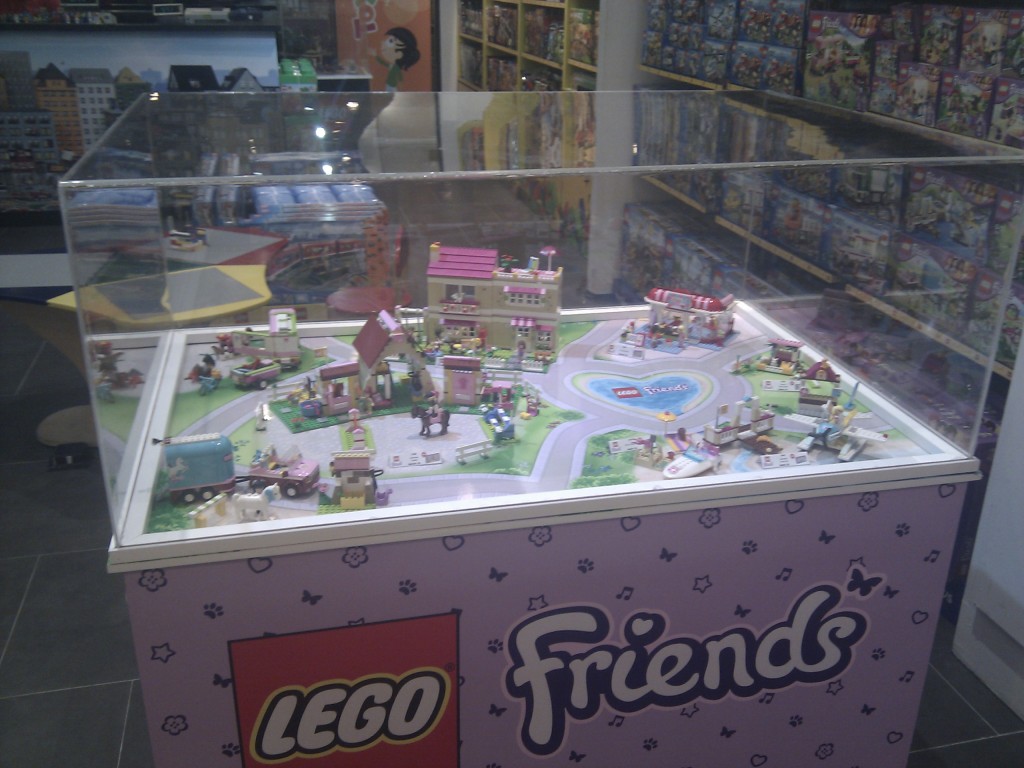 They had a Friends display, showing off a mixture of the older Friends sets from earlier this year (Olivia’s House and City Park Cafe) alongside the newer Summer Friends sets. I was a little perplexed as to why the largest set Summer Riding Camp  (which weighs in at 1112 pieces making it the largest Friends set) was omitted from the display. My guess is that they wanted to save some money and not relegate a huge set for display purposes. Who knows. Not bad anyway, I’m a huge fan of the Friends theme and it was nice to see most of the new sets built up. 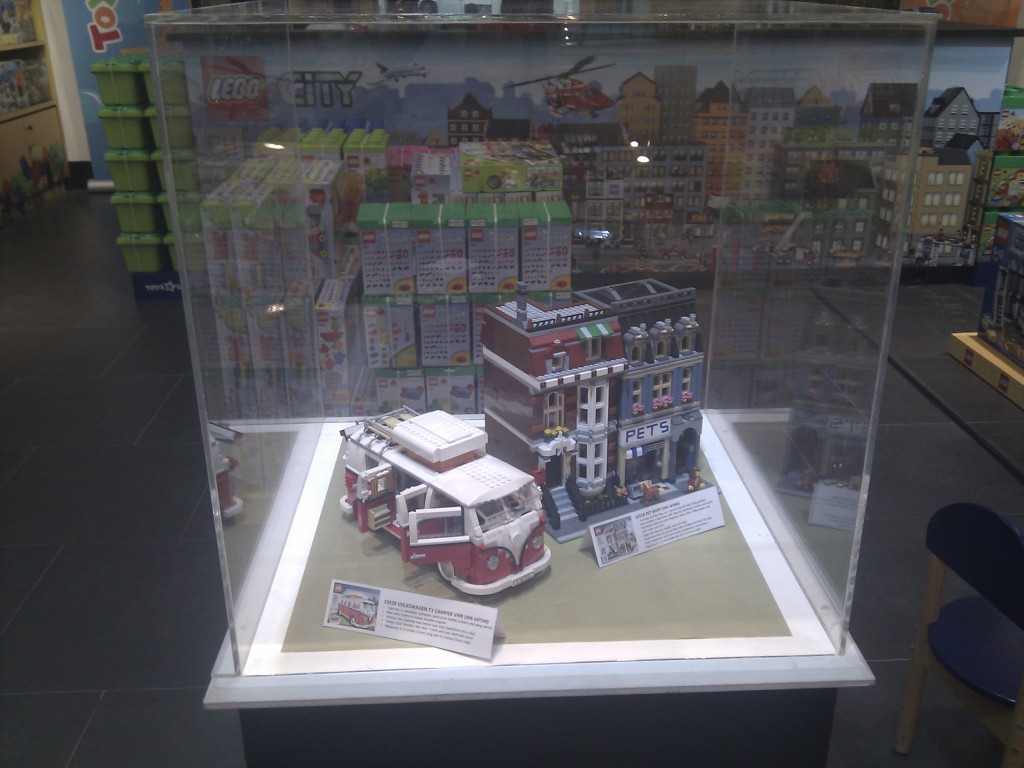 They also had an exhibit featuring the immaculate VW T1 Camper Van alongside a modular building – The Pet Shop. I guess this exhibit is meant to appeal to the AFOLs and more serious adult builders. 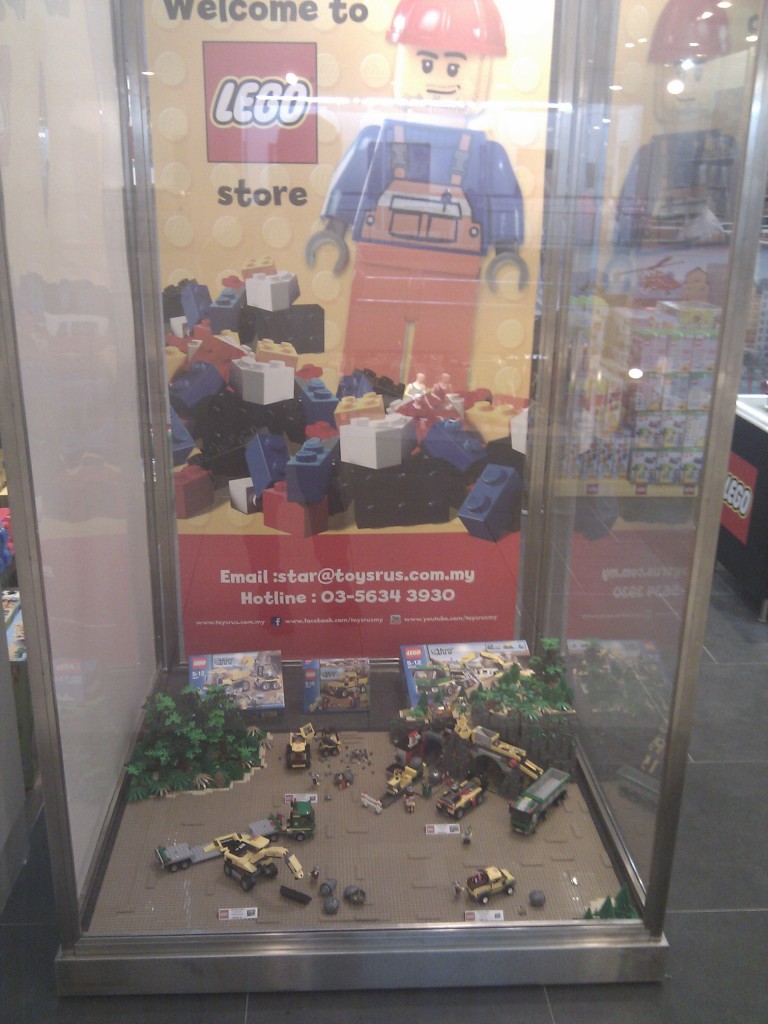 Right at the left side of the store’s entrance, they have a spectacular display of the new Mining sets out for all to see. They have some lazily put together shrubs and a cliff  to make it look less bare. 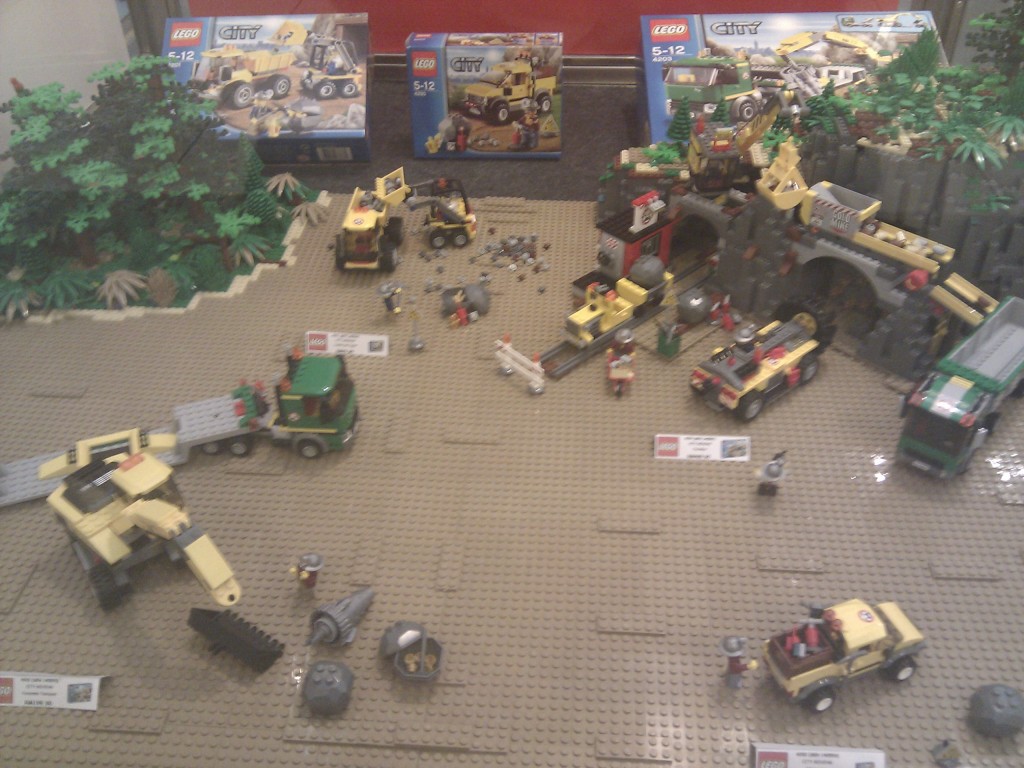 Here’s a blurry closeup of the sets. Boys are going to LOVE the Mining theme. It doesn’t yell MUST-BUY to me, but I gotta admit that The Mine looked pretty darn impressive. A younger me who was obsessed with heavy construction equipment would’ve been ecstatic about it. 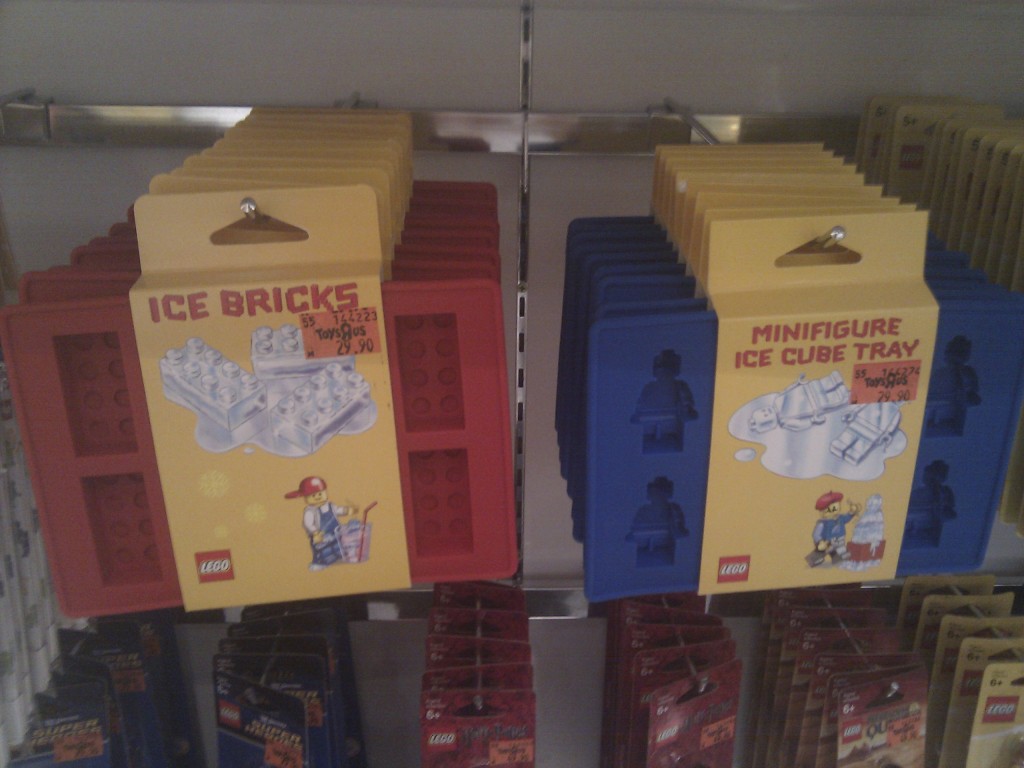 A pleasant surprise was seeing quite a number of Lego accessories and gear for sale. The ice trays particular stood out for me and at RM 30 a pop (which is still quite pricey IMO) they were kinda tempting. I may come back for them. 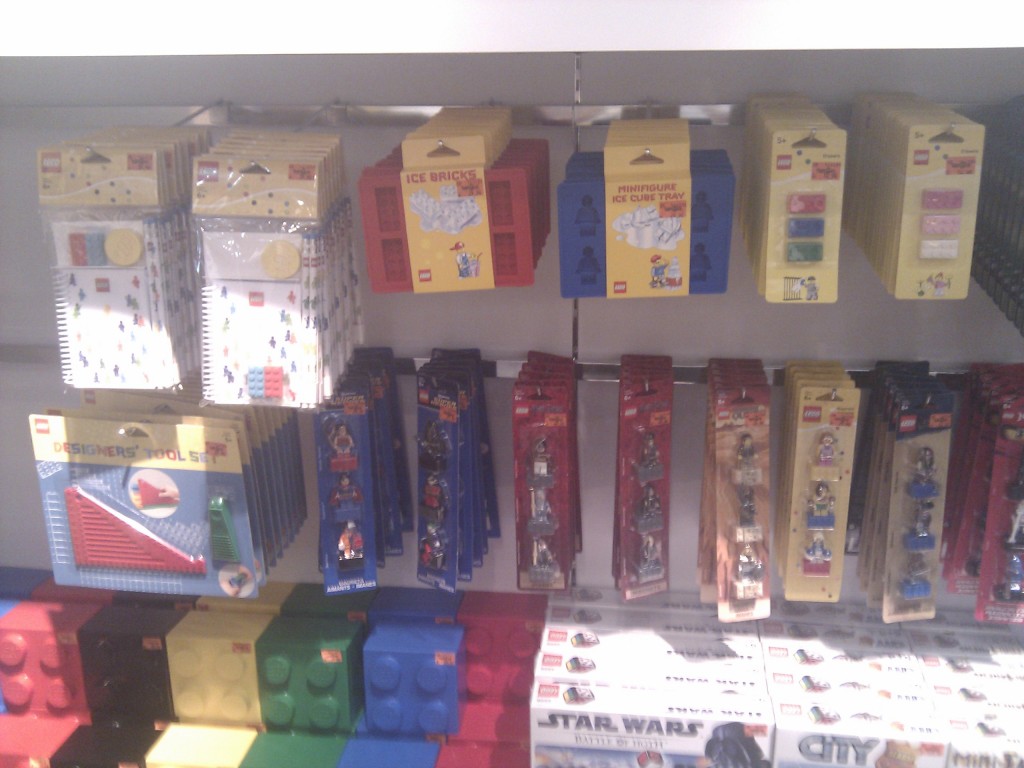 Here’s a look at the other paraphernalia on sale. The Lego containers were pretty tempting as well. 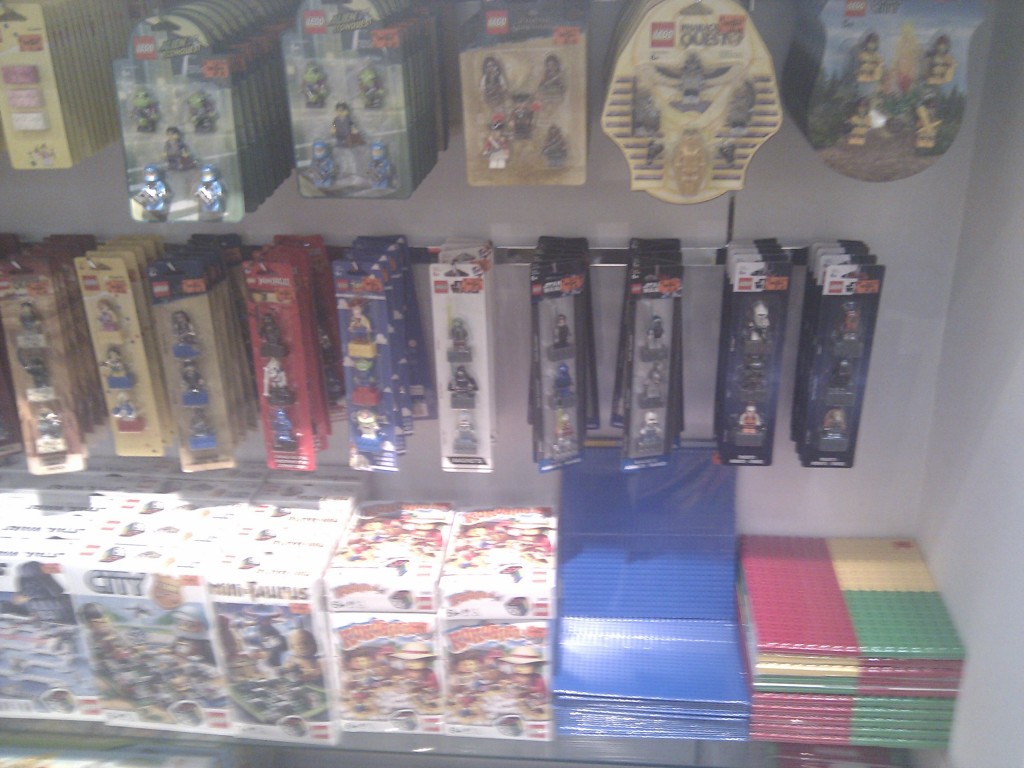 Another pleasant surprise was seeing the Alien Conquest, Pharaoh’s Quest, Pirates of the Carribean and new Firemen ‘battle packs’ on sale. They came in at RM50 each, which is pretty alright, since they retail for US$15 in the states. The Alien Conquest ones were especially tempting. 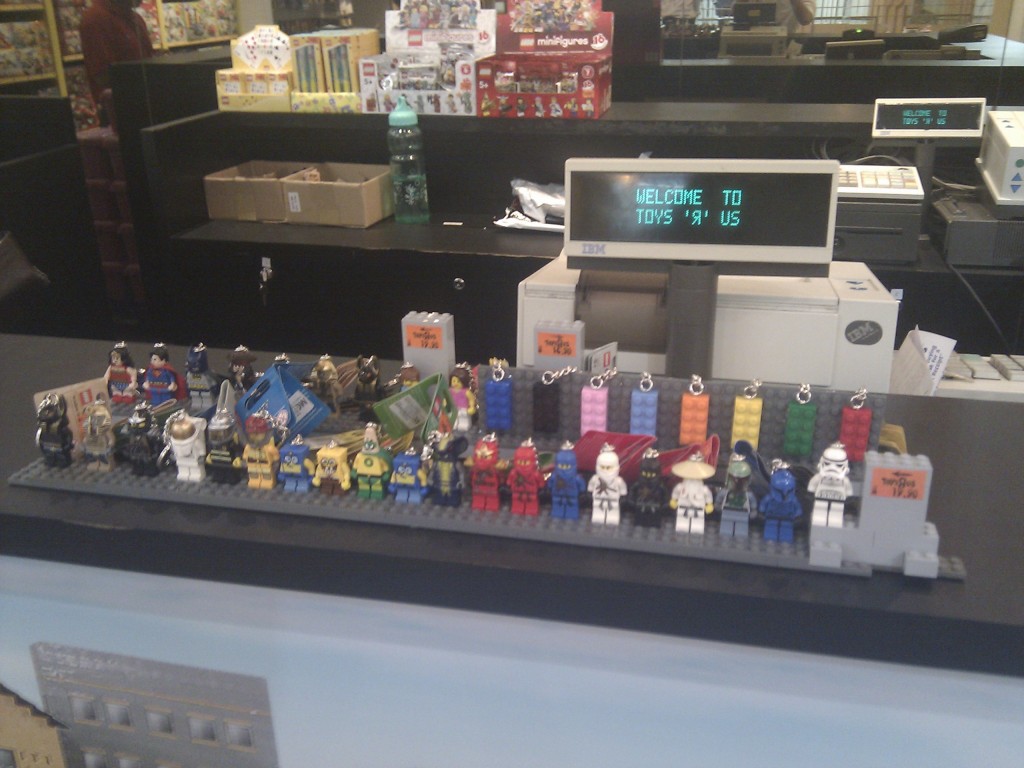 They also had keychains on sale near the counter for RM20 each. I can see this being popular as impulse gift buys. The Superman keychain is a pretty good deal, imho. 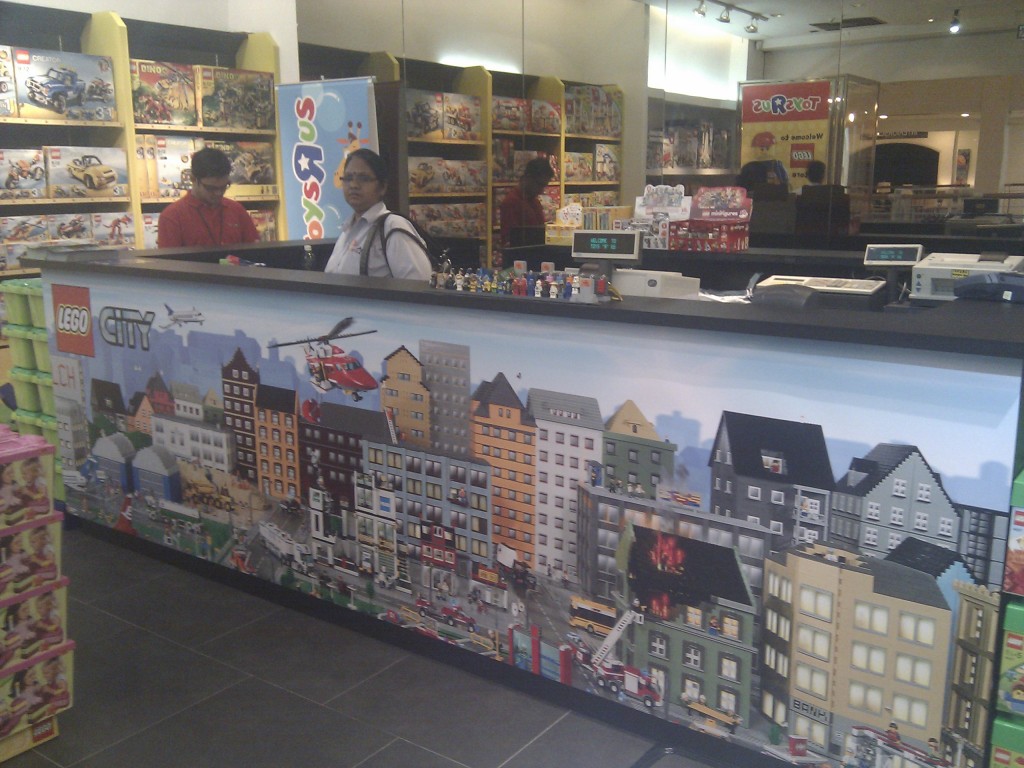 Speaking of the counter, it was decked out with a panoramic scene of a Lego city. Very classy and nice. One of my favourite things about the store. 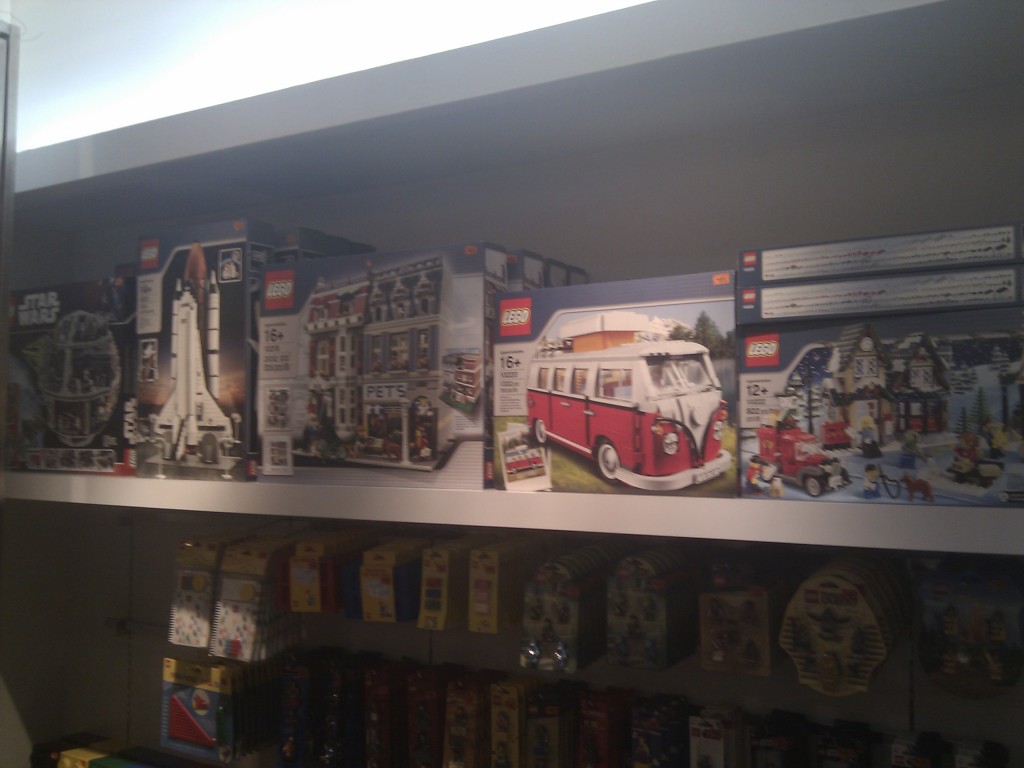 Okay, the coolest sets on sale were actually placed in a very unstrategic location, tucked into a nook on the left of the store as you enter. They had exclusives such as the Death Star, VW Van, Winter Post Office and the Pet Shop which was nice. It was nice to see the Death Star being on sale in some place other than Brickboy. The Death Star had a RM 2,000 price tag on it, which is frankly ridiculous. I can buy one online at 25% LESS. That’s almost RM500 cheaper.

Now, I get little touchy when it comes to Lego pricing in Malaysia. Why? Because it’s OBSCENELY overpriced. Obscene. Now RRP for Lego in Malaysia is almost comparable to Australia (Australia’s slightly lower) but I absolutely cannot STAND the fact that we almost never get sales here. I mean, what the hell is up with that. It’s already cheaper and more efficient to buy Lego online either from private or online retailers, get it shipped here and have it cost drastically lower than the prices in Toy Stores here. Yes, that’s sometimes with priority shipping, so I get it within 2 working days. I really hope parents stumble upon my blog as they Google “where to buy Lego in Malaysia” to educate them a little better about NOT buying from shops like Toys ‘R’ Us and send a message to ALJ (that’s Lego’s distributors in Malaysia) that it is absolutely NOT OKAY to gouge prices like that. 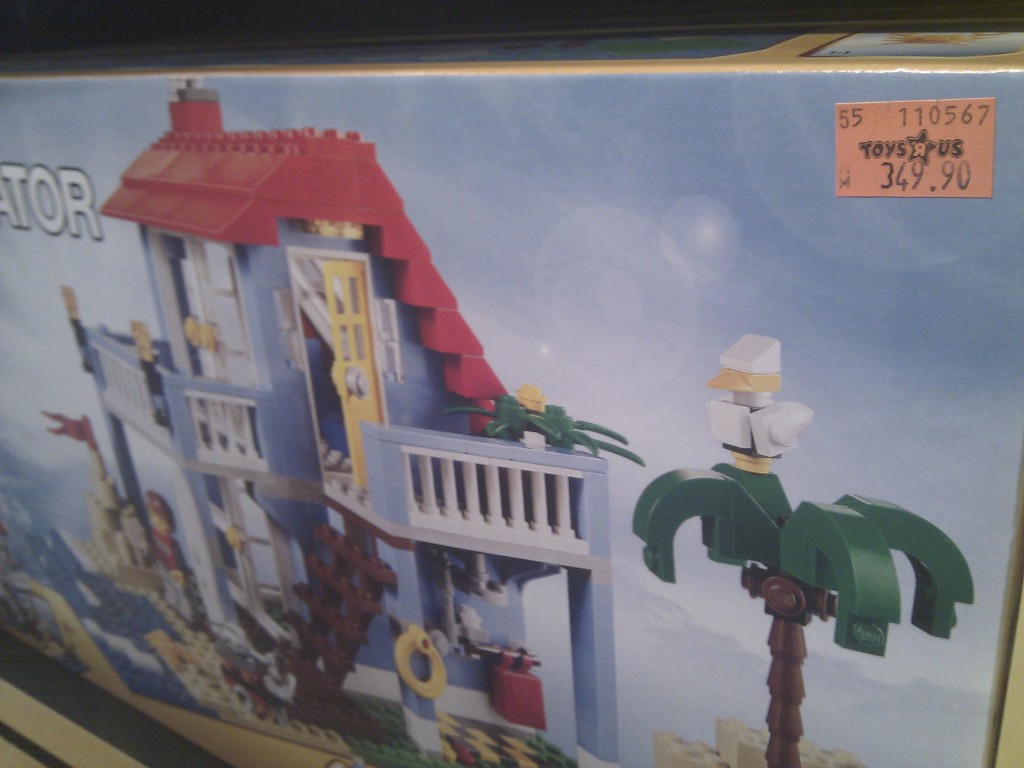 Now this… this really made my blood boil. I really hope this wasn’t a price error (all the pricetags in the store were consistent. WTF. RM349 for the Seaside House? Get the cuss out of here. I got mine on sale in Australia for AU$35. That’s RM105ish! Three times the price I could get somewhere else is INSANE. Even the US RRP is US$50. Come on man, charging almost 2 and a half times is just dumb. By the way, I’ve seen this selling for RM229 or RM249 (my memory’s fuzzy) if I recall correctly at other Toys ‘R’ Us stores. Is this a deliberate pricing tactic to take advantage of the more affluent Bangsar expat crowd?  That’s just UNETHICAL. 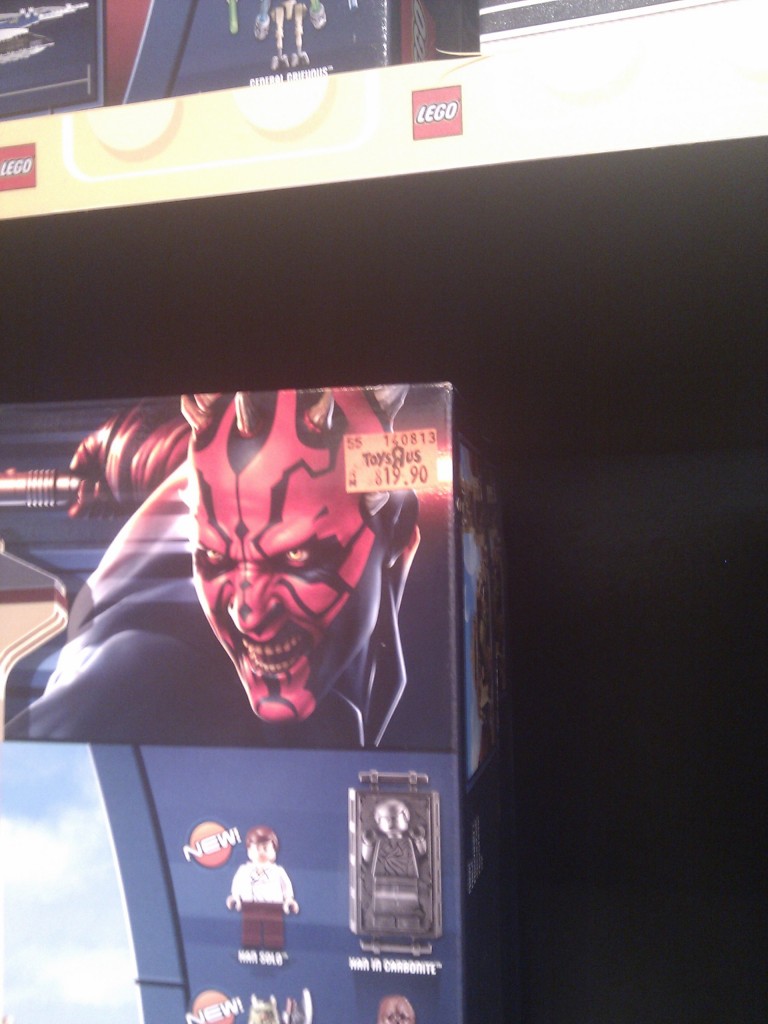 By the way, here’s Jabba’s Palace for RM819. The US RRP is… US$120. Even in Australia, it retails for AU$200, but was available at AU$170 since it’s the Australian Toy Sale. That’s just wrong man, that they use a simple > 2x the US price for prices here. The bigger the set, the more money you lose because of this simple and impractical solution to pricing.

Well.. I could go on and on and on and on about the sheer unfairness and grotesque pricing techniques in Malaysia, but I’ll stop here. AFOLs, especially serious ones are wise and learned enough to know how to source for cheaper Lego overseas. There is this thing called the internet and AFOL communities online where information on how to obtain decently priced Lego is freely and readily available.

Now this isn’t a rant at Lego. I love the brand too much to bear any ill will towards it. It is a rant at the local distributor, ALJ who prices them in such a way. I love Lego. I wish everyone could afford to buy the Lego sets they want, provided they’re available at decent prices.

Now I can kind of understand Australian and European pricing – you gotta factor in minimum wage, logistics, warehousing and all the other stuff into it, because they’re first world countries and standards are set that way. Malaysian retail workers get paid pittance, logistics is cheap… so there’s really no justification for charging us more than our Western counterparts. Slightly above, I can understand and I would pay if it was worth it. But… more than twice the price?

Oh and before I close off, what the flying cuss is it with Malaysian retailers not discounting their toys? Australian Lego is fairly expensive but thanks to the abundance of sales and deals throughout the year, buying Lego there is actually feasible sometimes. Not having regular toy sales and discounting new-ish products is just a bizarre business decision.

What’s the solution? Same as the trade of endangered animals. When the buying stops, the price gouging can too. Parents who buy Lego (which is why I make it a point to educate young parent friends of mine who are intending on buying Lego on the ridiculous pricing here) need to wisen up and stop purchasing Lego at these insane prices, opt to ship it in via online means and send a strong message to the local distributor here that IT IS NOT COOL TO OVERCHARGE for something that is meant to bring joy, creativity and happiness to kids.

Well, that’s that. Just had to get that off my chest. Most of it was probably triggered the ridiculous pricing for the Seaside House.