If you live in South Australia and love LEGO, you’re in luck as Brick-A-Laide, South Australia’s biggest LEGO event will be running this weekend in Adeaide on Friday and Saturday, 25 – 26 March 2016 at the Adelaide Convention Centre. I have a special connection to Raidelaide as I attended university there and have plenty of friends, family and fond memories of the Festival State.

If you haven’t been to LEGO fan conventions or events like Brick-A-Laide, it’s an incredibly fun and awe-inducing experience. Check out some photos I took from Melbourne’s very own Brickvention earlier this year to give you a taste of what to expect.

This year, fans can expect to marvel at plenty of Star Wars displays as well as a massive 4-metre scale ship modelled on the World War II battlecruisers, manned by a crew of 50 minifigure sailors as well as a large collaborative display that celebrates LEGO Classic Space themes of the 7os and 80s. I’m a huge fan of the Classic Space era, so I’m looking forward to seeing photos of the space display!

If you purchase tickets online, General Admission (16 years and older) tickets cost $11 and Children’s tickets (2 – 15 year olds) cost $6. Do note that there is a booking fee of $4.95 if you book online. At the door, tickets cost $13 (General Admission) and $8 (Children). Kids under 2 years old enter for free.

Apart from LEGO exhibits, models and designs on show, Brick-A-Laide also features a creative space for fans to create and build, a Brick Cafe for refreshments and of course plenty of traders and stores where you can purchase LEGO or LEGO-related merchandise. 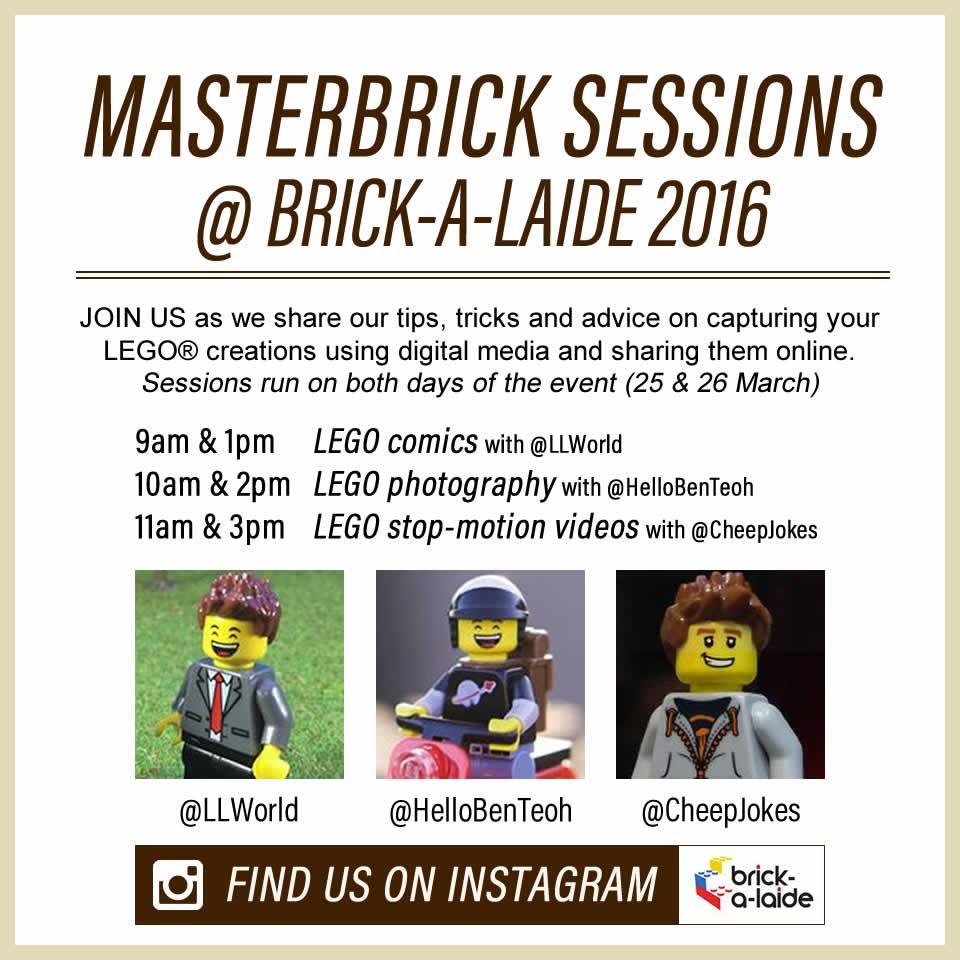 There are also cool events such as Masterbrick Sessions, hosted by some of Australia’s coolest LEGO Instagrammers @LLWorld who will be running a tutorial on LEGO Comics, @HelloBenTeoh who will be running sessions on LEGO photography and @CheepJokes who will be sharing tips and tricks on stop-motion videos.

I know the 3 of them personally and they’re top blokes. Check out my experience meeting @LLWorld and @Cheepjokes at an Instagram meet-up late last year.

I also managed to squeeze in a short interview with Tim Burdon, one of the organisers of Brick-A-Laide and also LEGO Ambassador for the Southern Bricks LUG (LEGO User Group). I spoke to Tim over email and he was happy to share in more detail what fans can expect from Brick-A-Laide 2016, as well as what typically goes into putting together a public exhibition like this.

What can LEGO fans look forward to at Brickalaide this year?

LEGO fans of all ages will be able to immerse themselves into a world of LEGO fun. We will have displays from all over Australia, with what could possibly be one of the largest Classic Space displays ever seen. We will also have a large scale World War 2 Battle Cruiser, the USS OGEL on show for the first time in South Australia.

What does it take to organise SA’s largest LEGO public exhibition?

Brick-A-Laide is a year round job. While the event is only open to the public for two days, it takes a team of volunteers and staff the other 363 days of the year to make it look as amazing as it does. We work with sponsors, exhibitors and traders to ensure each year is better than the last.

Tell me a little about the team behind Brickalaide.

The team that brings Brick-A-Laide to life consists of both staff from the Adelaide Convention Centre and the South Australian LEGO community. We are a tight knit team that has a passion for LEGO and for making each and every attendees’ experience something they won’t forget.

What’s your LEGO story? How did you get into LEGO?

I got back into LEGO about 13 years ago when the first series of Bionicles were released. From there I moved into Creator houses, enjoying reawakening the skills I thought I had forgotten. From there I started creating my own MOCs (My Own Creation) and exhibiting at shows in Melbourne and Canberra.

Just over a year ago I founded the Southern Bricks LEGO Users Group in South Australia and became the LEGO Ambassador for the LUG.

Are you displaying this year? Can you give us a tease of what it is?

Yes, while I am one of the organisers, I still managed to find time to make some MOCs for the event. I will be bringing along the USS OGEL, which if you went to Brickvention in January, you would have seen the front half. But for my home event I am bringing the entire ship which comes in at just under four metres long.

You’re the LEGO Ambassador for Sblug. Tell us more about what goes on in a LUG and why South Australian LEGO fans should consider joining/coming for one of the meetings.

Joining any RLUG (Registered LEGO Users Group) anywhere in the world is probably the best thing I can suggest to any LEGO fan. Being a member allows you to share your ideas with other like-minded individuals and also allows you to learn new [building] techniques. Sometimes, it’s not the more experienced builders teaching but the newest members coming up with a new technique others have never seen.

Our RLUG meets up once a month and spends a lazy afternoon playing games, sharing ideas and trading LEGO stories of our latest creations. If people are interested in joining the Southern Bricks RLUG, head over to sblug.club.

Lastly, what’s your favourite LEGO theme and set of all time?

I don’t actually have a favourite theme or set. With most of my building being MOCs I tend to by sets more for parts than the actual set itself. Having said that, I have found myself buying more Friends and Elves sets than another mostly for the new colours and elements that have been appearing in them.

Special thanks to Tim Burdon for taking the time to answer these questions.

For those of you attenting Brick-A-Laide, I hope you have plenty of fun! Snap some pictures for me!