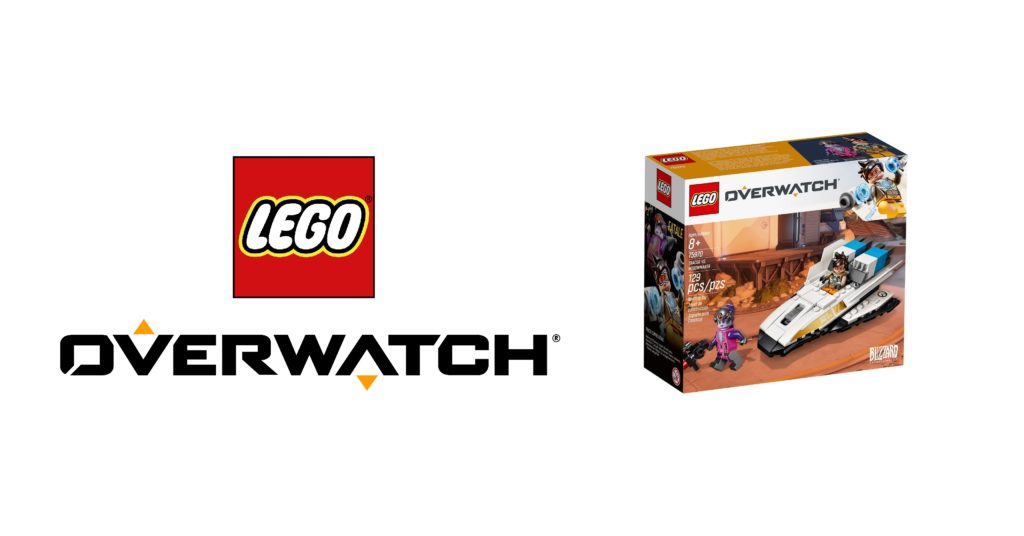 Last week Target USA gave us our very first look at the new LEGO Overwatch theme that has a release date of 2019.

For the uninitiated, Overwatch is an online first-person shooter (FPS) game from Blizzard (creators of Starcraft and Warcraft) that’s a bit of a mix of traditional FPS games and a Dota 2/League of Legends type game where your character grows stronger and gains more abilities as the game progress. It’s pretty much the spiritual successor to Team Fortress.

Overwatch is played online with other people and has been somewhat of a relative success due to its fun, fast-paced gameplay, as well as the rich and diverse cast of characters (called Heroes) of all shapes and forms, which give them unique characteristics and abilities. This translates to nearly limitless gameplay potential as there’s something for literally everyone.

I dabbled in Overwatch when it launched, but I never really took to it. It was an okay game, and I did enjoy the frenetic pace and nature of it all, but I’ll always be a CSGO boy at heart. If I want to play role-based games, I have Dota2 for that, so I never really warmed to Overwatch.

I also mostly game on the go these days on my Nintendo Switch, so PC Games haven’t really appealed to me in a while.

That said, while I’m not the biggest Overwatch fan, I think this is a respectable move from LEGO, exploring other licenses outside of their core of Super Heroes and Star Wars to appeal to new fans. This being a video game license (Angry Birds doesn’t count) is also a great move on LEGO’s part, and hopefully paves the way for my dream license – Nintendo.

Here are my thoughts on the sets revealed. Apologies in advance for any inaccuracies, it’s been a while since I’ve played! 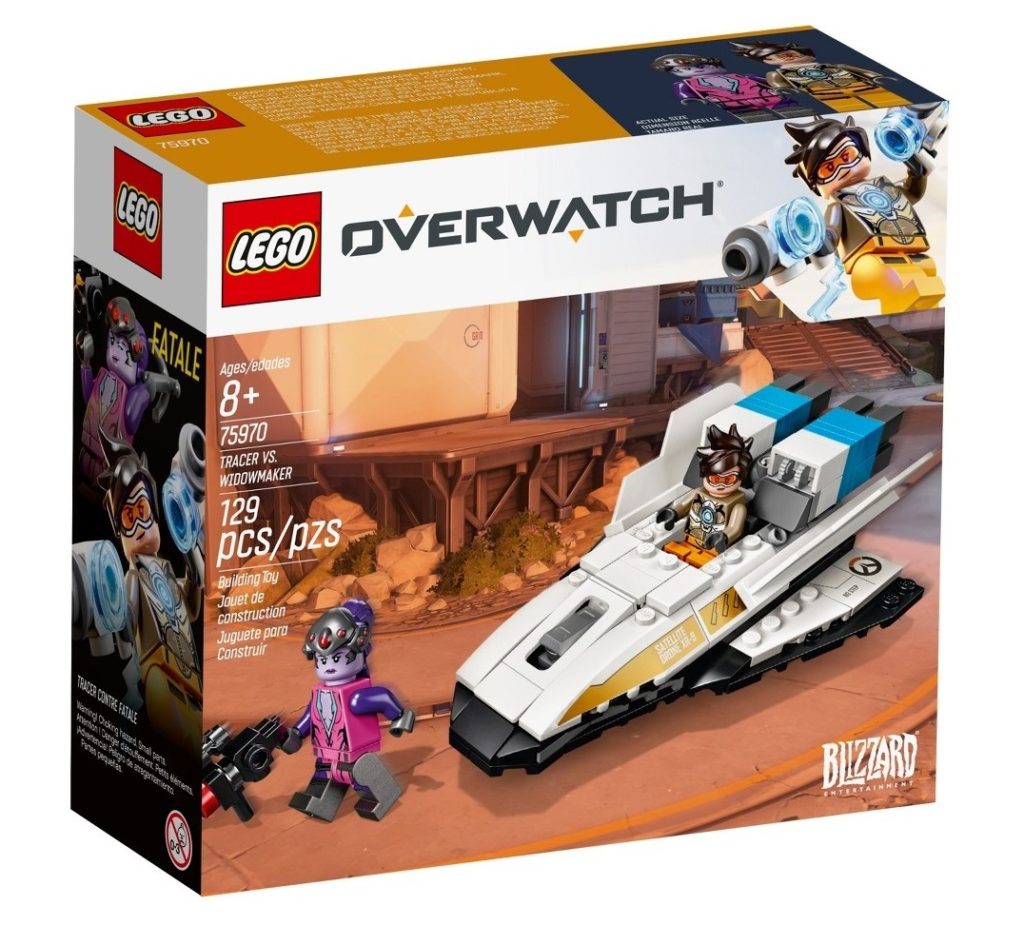 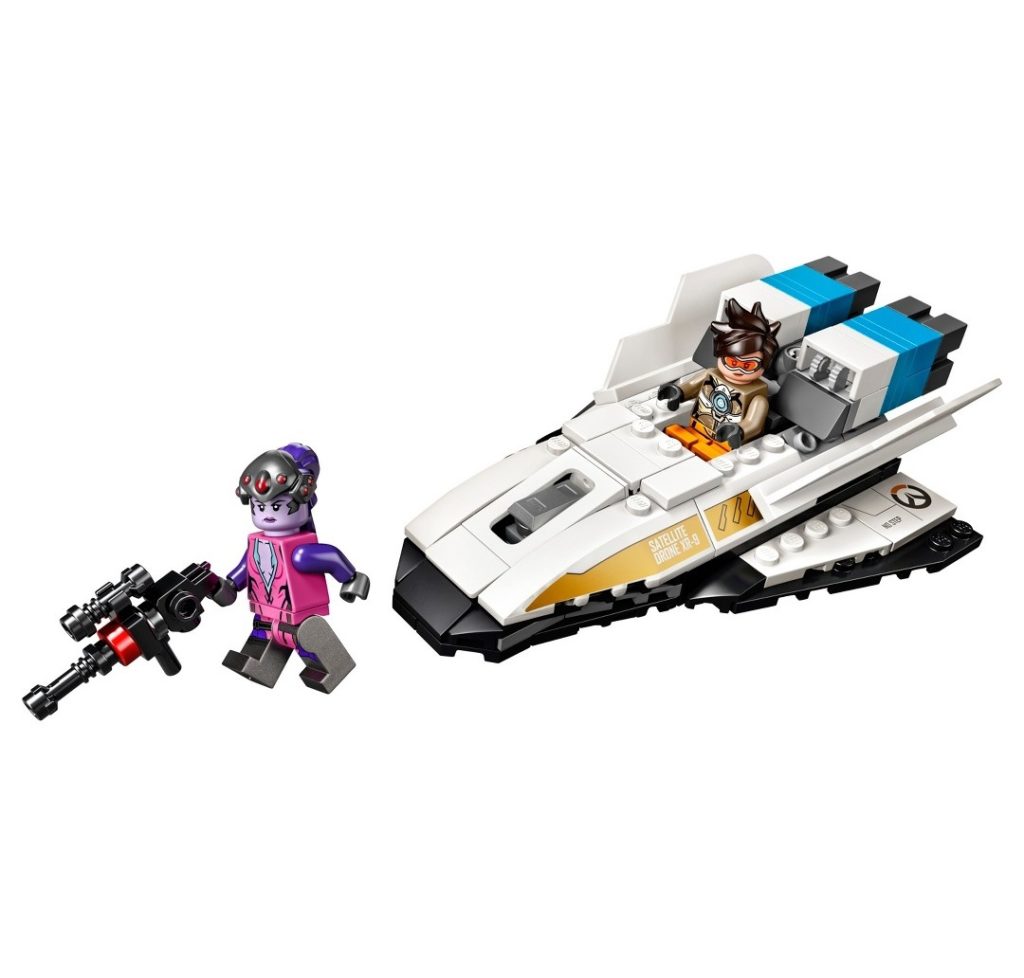 Her adversary is Widowmaker (the character I played the most) who’s playstyle is very much that of a sniper – picking off other heroes from afar.

Included is a small vehicle, the Satellite Drone XR-9 which is some sort of spaceship, that Tracer pilots.

It’s an easy sell, and something that the Tracer fans will eat up. I might pick this one up because of my affinity to Widowmaker. 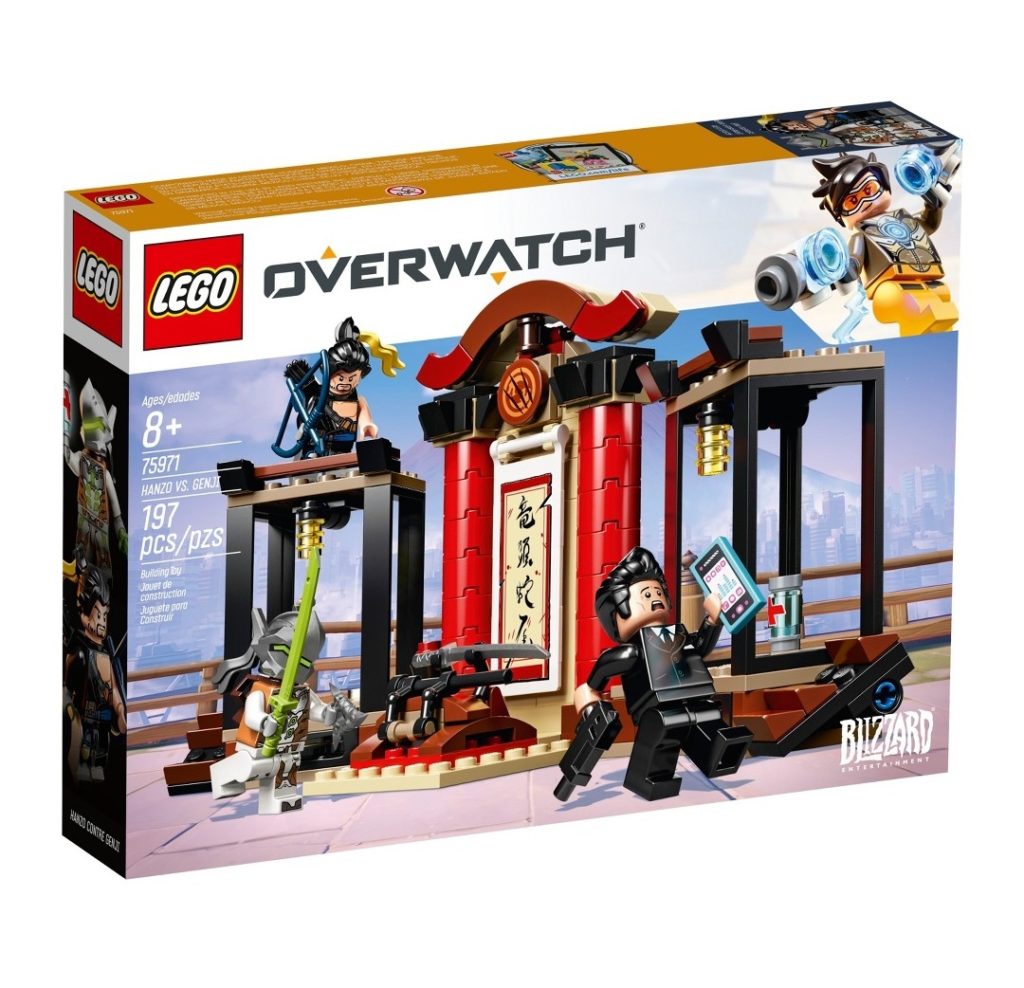 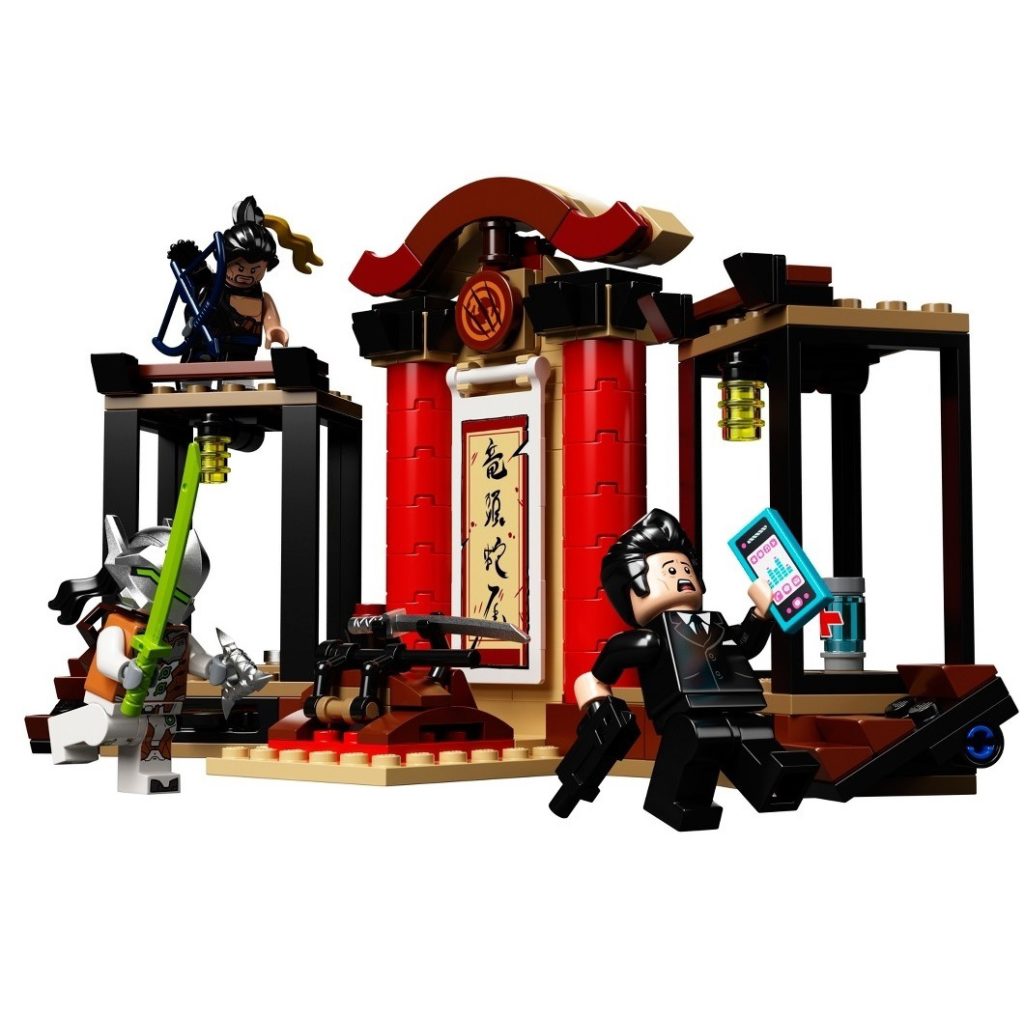 This small-ish sized set pits the cyborg-ninja Genji against Hanzo, who like Widowmaker is also a long-range sniper-type hero in some sort of dojo. Hanzo is one of the most-played heroes in the game, so I expect this set to also sell reasonably well.

The set also includes a random civilian character. On its own, the set seems okay – the array of new accessories and recoloured weapons (that blue bow!) seem quite appealing to me, but this just screams expensive minifigure pack. 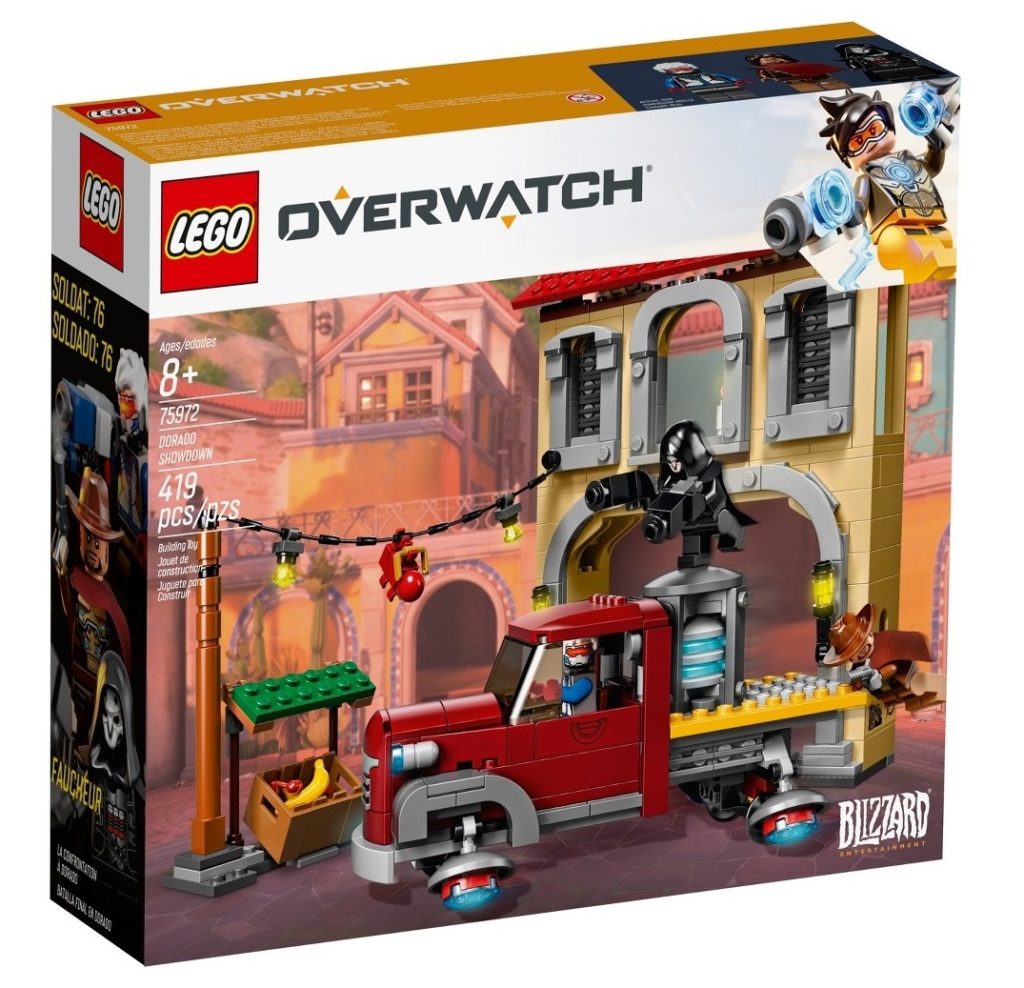 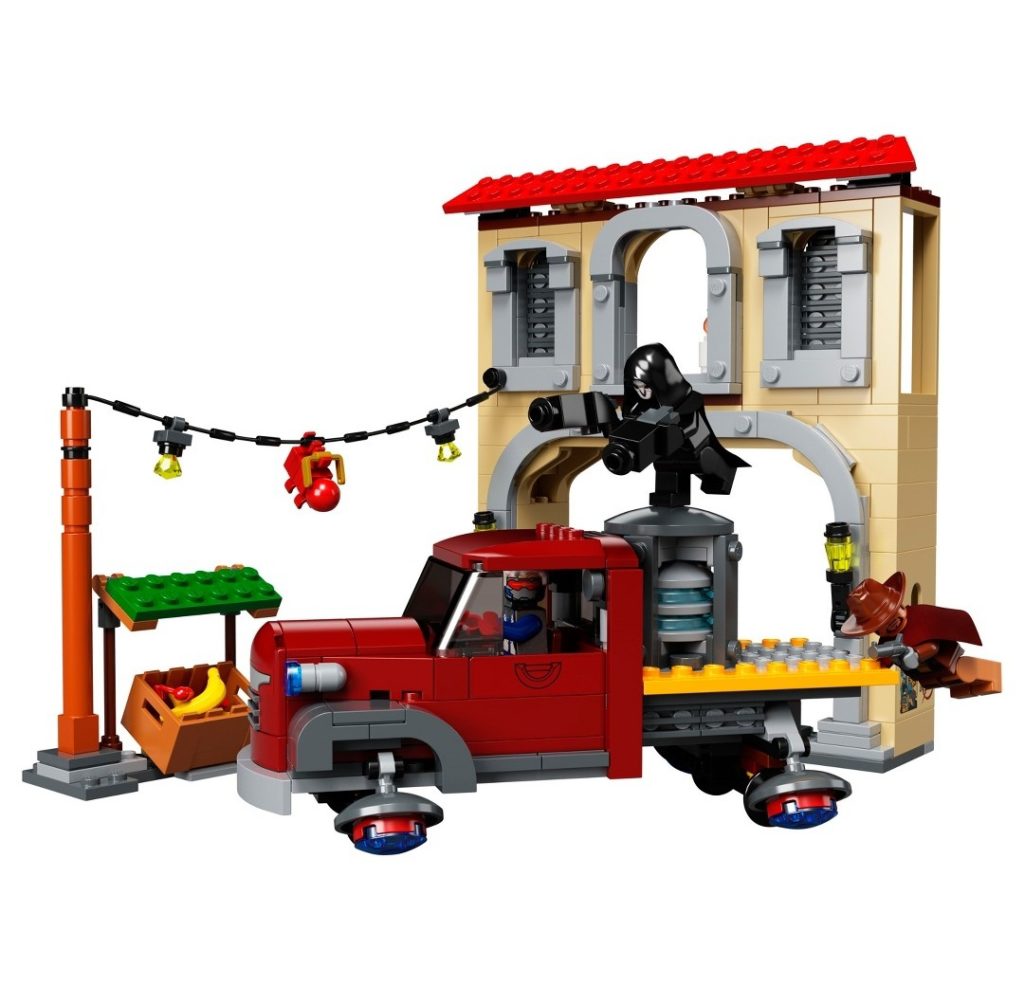 The Dorado Showdown set is based off a brilliant animated short produced by Blizzard to further flesh out the lore and characters of the game. The set features 3 characters, Soldier 76, McCree and Reaper in a 3-way battle, set against a wall arch, and a levitating truck in the Dorado map.

McCree and Soldier 76 are both pretty popular characters, and Reaper is also quite popular amongst newbies due to his easy to pick up gameplay style, but I’m finding it hard to get excited by this set. The truck doesn’t seem particularly exciting and this just feels like a LEGO Juniors set based on how simple and kiddy it looks. 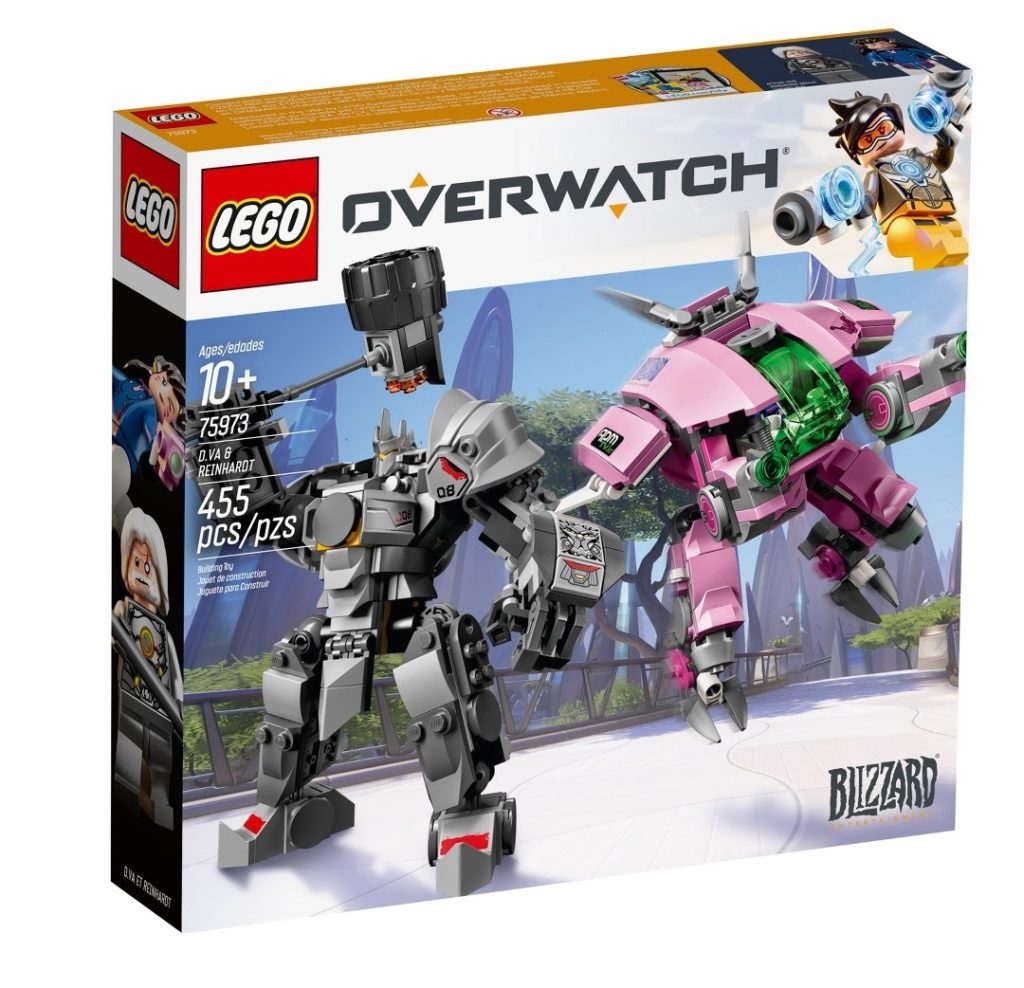 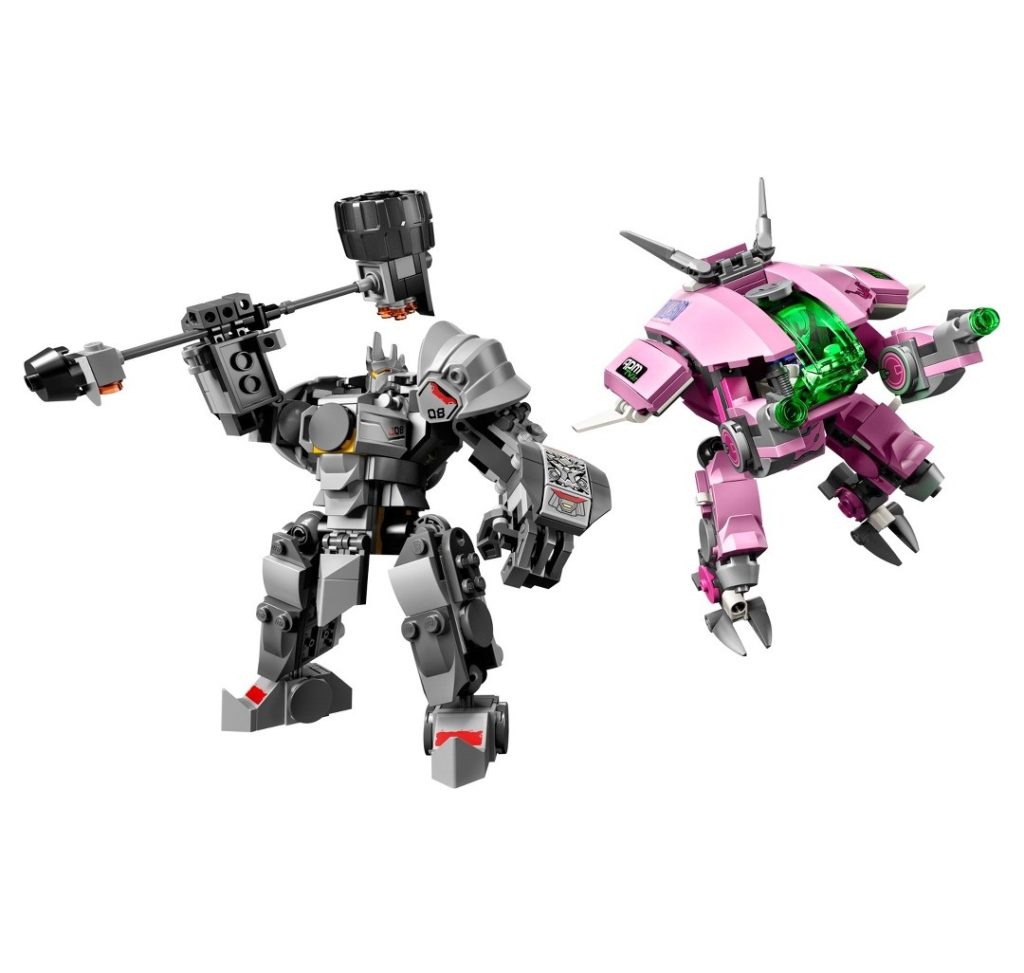 This right here is possibly going to be THE best-selling set of the theme purely because of the inclusion of D.va. She’s THE most popular Overwatch character in the game (because everyone loves kawaii anime girls) and the subject of thousands of cosplays and fan-art.

She isn’t just a pretty face, but also a wildly popular in-game pick as she’s one of the heroes that’s easy to learn, but deadly in the hands of competent players. Also included is Reinhardt, another tanky hero who is also quite a popular pick online.

If there was a set that I’m excited about, it’s this one, purely because you get 2 mechs which I’m a big fan of. The price point isn’t too prohibitive as well, which makes this an all-round winner in my eyes. 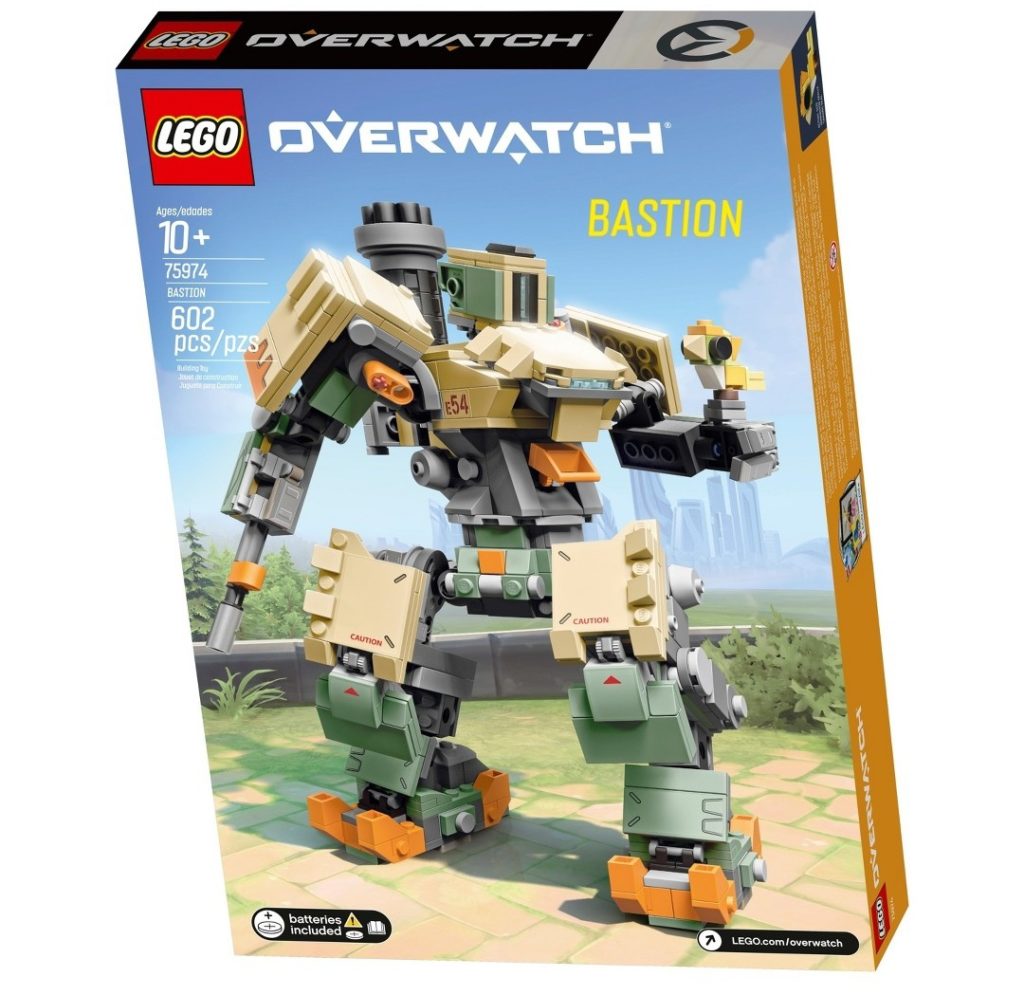 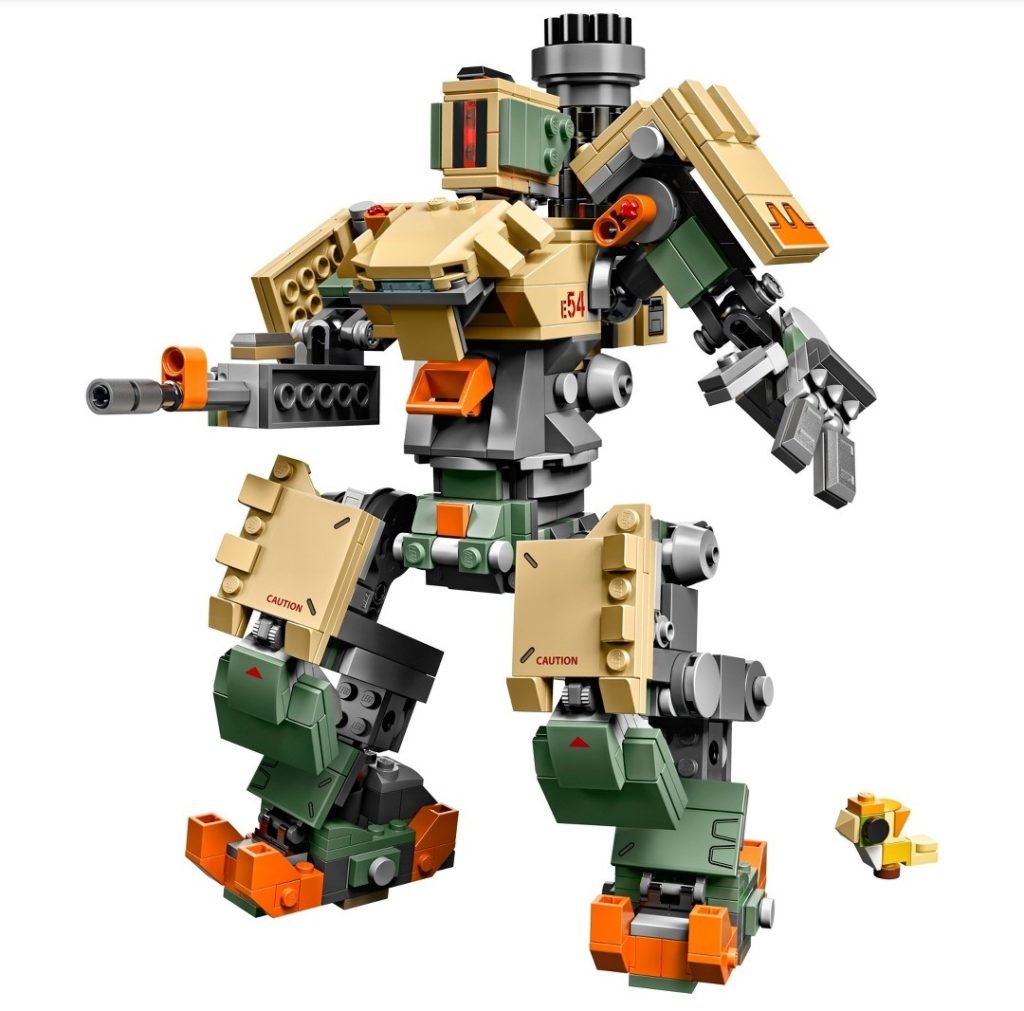 For Overwatch fans who want a bigger mech, look no further than Bastion who towers above all the other heroes. This set doesn’t include a minifigure, but the build seems reasonably impressive, with lots of clever details and play features built into it that involves batteries – probably a light on its head.

The mech also transforms into a turret, which is a neat bit of playability, but the high price point of this set will make this one a bit of a tough sell, especially since Bastion isn’t the most popular of picks in the game. 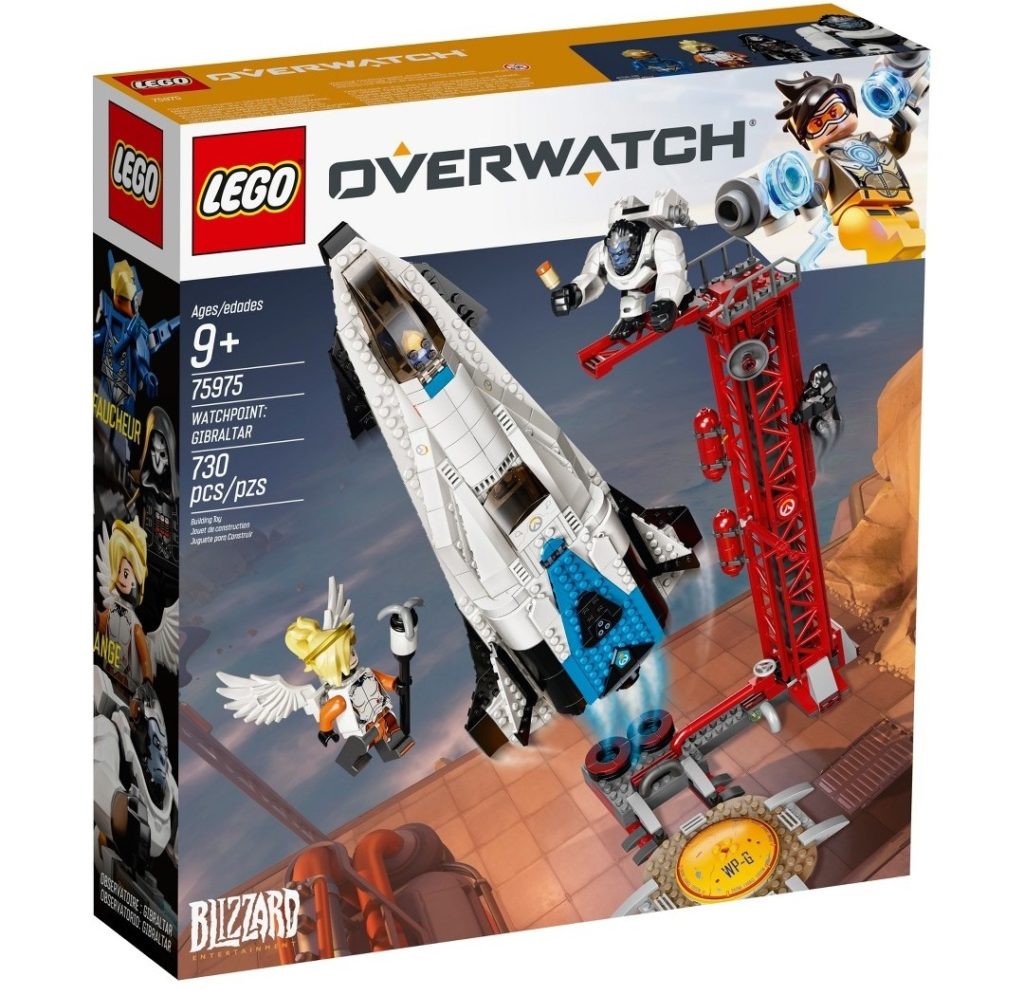 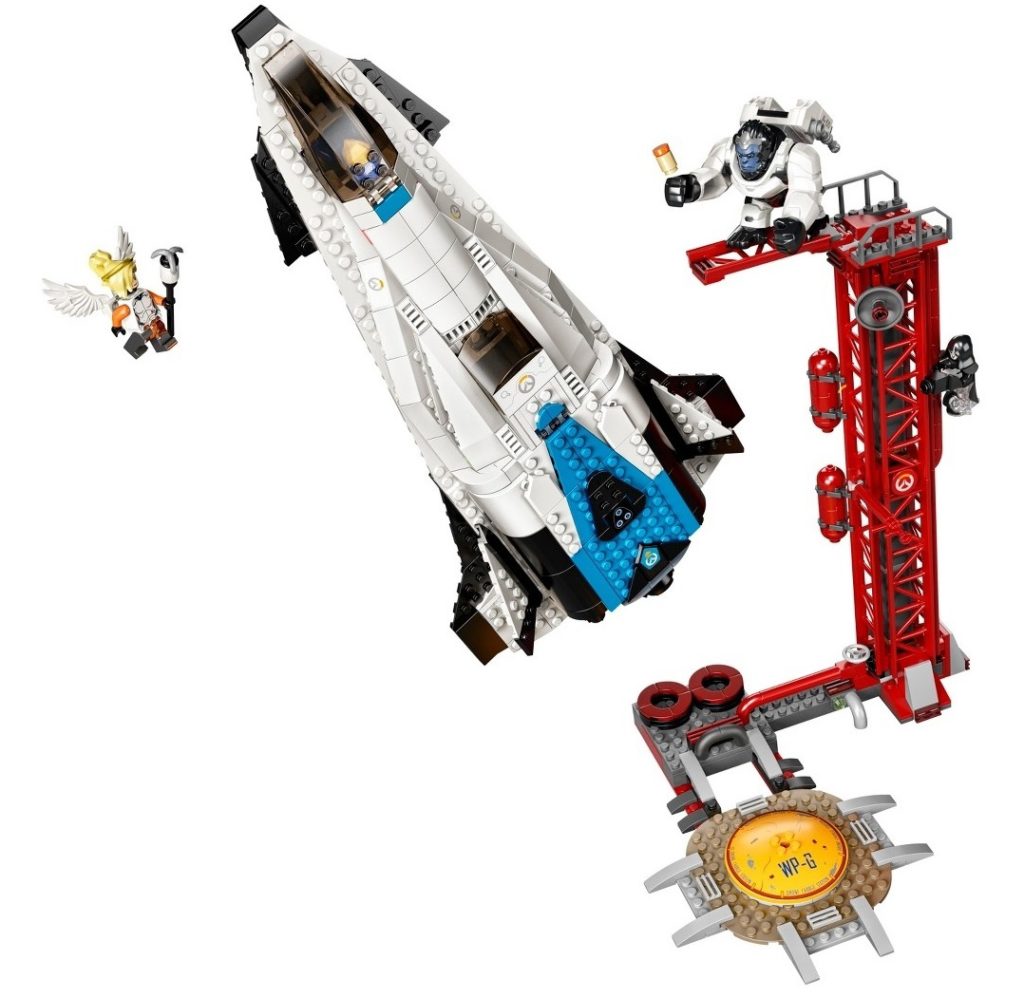 Last but not least, we have the Watchpoint: Gibraltar set which is some sort of rocket ship that blasts off from a launching pad. This is the biggest set revealed so far and includes Pharah, Winston, Reaper (who also shows up in the Dorado set), and another fan-favourite support hero – Mercy.

The inclusion of Mercy and Winston, who has a spacesuit on are big drawcards, and the set itself looks really cool with the space shuttle, and the launchpad, which don’t seem like throwaway builds. The launchpad lends itself quite well to the arena-style gameplay of Overwatch and represents quite a number of options for fans to pose the characters around it.

It is on the pricier side that will likely only appeal to hardcore Overwatch fans.

Info via The Brick Fan

So those are my first impressions of the sets. I think they’re just okay but that’s because I don’t play the game any more and never had that big a connection to it. Like most licensed themes, they will appeal strongest to fans who are familiar with the subject matter.

LEGO are definitely trying to appeal to Overwatch players, many of which fit the demographic of an AFOL (geeky with plenty of disposable income) and get them interested in LEGO.

I do have my doubts about this particular strategy, as Overwatch doesn’t have the biggest of playerbases. 2 years ago, in its heyday, (which is probably when LEGO negotiated the license), maybe it would’ve seen like a no-brainer as it was the biggest game around at the time.

Now battle-royale games like Fortnite and PUBG (less so) reign supreme, and Overwatch is widely considered to be in a state of decline. The relatively newness of Overwatch as a game also means that it doesn’t have the cultural currency of Blizzard’s marque titles like Starcraft, or World of Warcraft which are some of the most influential games of all time and have large, established players and fans.

It remains to be seen how successful Overwatch will be in some of LEGO’s core markets like Europe, but I think it’ll do fairly well in Asia, especially in South Korea.

Me? I’m not too excited about the theme and it’s a relief cause it’s one less thing I have to collect. I may pick up a set or two on deep discount, but I won’t be hurrying out the door for them.

One thing that could potentially drive sales and I hope that LEGO implements, is integration with the game. It’d be really cool if LEGO included a way to redeem exclusive skins that are only available when you purchase the corresponding LEGO sets. It’d be a huge wasted opportunity if this isn’t part of the license deal.

Lastly, I think it’s an odd license, because for hardcore Overwatch players, they’re probably sinking in their disposable income into in-game loot boxes which give you the chance to obtain rare coveted skins (alternate in-game costumes for your heroes). I remember when I was playing Dota2, all the money I sunk into cosmetics, which didn’t leave me much cash for other things.

Anyway, it remains to be seen how well the LEGO Overwatch theme will be received by fans when they get released in 2019.

Are you excited about LEGO Overwatch or are you going to give this a pass? I’d love to know if there’s anyone that plays the game, or haven’t heard of the game before but find the sets interesting. Drop your opinions in the comments and take the poll below!