Update: We now have more official photos of the 31132 Viking Ship and the Midgard Serpent!

Hidden inside the pages of a Danish toy store catalogue, we have our very first look at 31132 Viking Ship, from the upcoming Summer 2022 wave of Creator 3-in-1 sets!

The set is due to be launched on 1 June 2022, alongside other unrevealed sets in LEGO’s second half of 2022 wave of sets.

The set comes with a gorgeous, fully brick-built viking longboat, and a mythical sea serpent, and 4 Viking minifigures. The photo is a little small, but they’re rocking what I think are new winged helms, and also marks the return of Horned Viking helms.

The set looks to be another exciting homage to classic LEGO themes in Creator 3-in-1, specifically 7018 Viking Ship challenges the Midgard Serpent from 2015’s awesomely underrated Vikings theme.

LEGO’s Creator 3-in-1 theme has become the modern home of reimagined classics, such as last year’s excellent Medieval Castle!

Oh, and special thanks to Leigh D. for picking up on this – but it seems that LEGO cheekily foreshadowed the Viking Ship in 11018 Creative Ocean Fun which was released earlier this year!

Can’t wait to see what other LEGO Summer 2022 sets they have in-store for us! We’ve already had a look at the Summer 2022 LEGO Harry Potter sets, so it probably won’t be long till we see what else LEGO has in-store.

Summer LEGO previews usually start in early May, so it won’t be long now!

Huge thanks to Hoth Bricks for breaking this news! 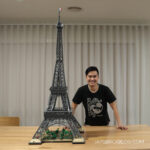