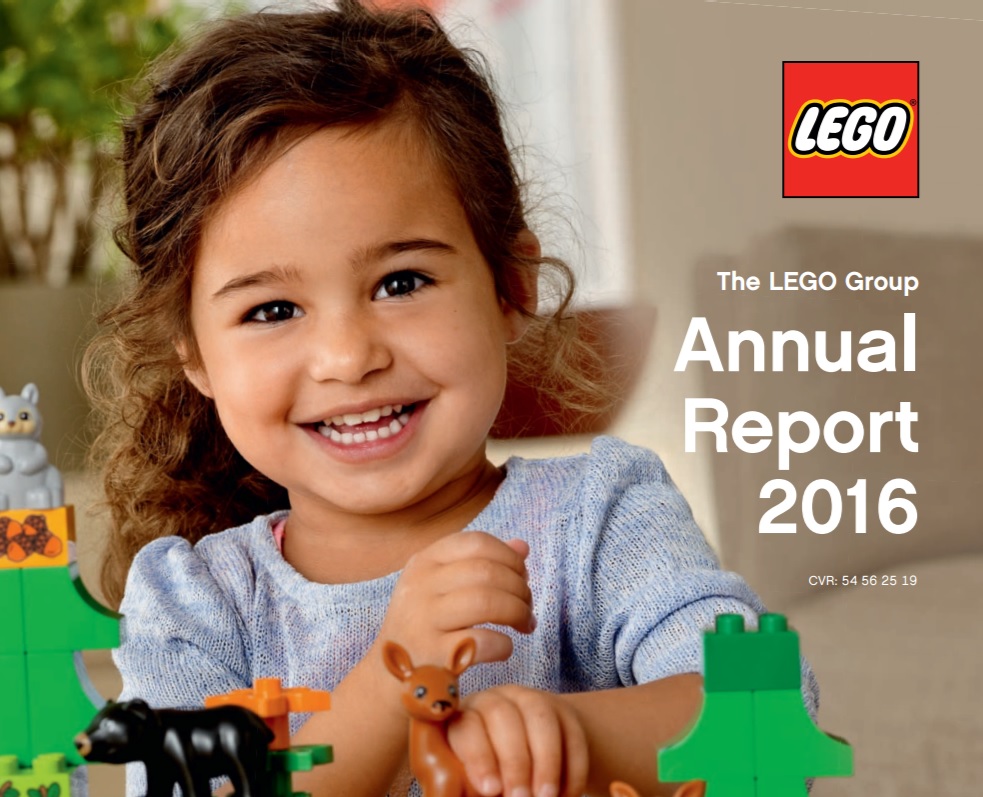 This piece has been sitting in my drafts for awhile, but it’s been a pretty busy week on my end so apologies if this is old news!

About a week ago, LEGO released their 2016 Annual Report and Financial Results which gives us a good indication of how our favourite toy company performed in 2016. 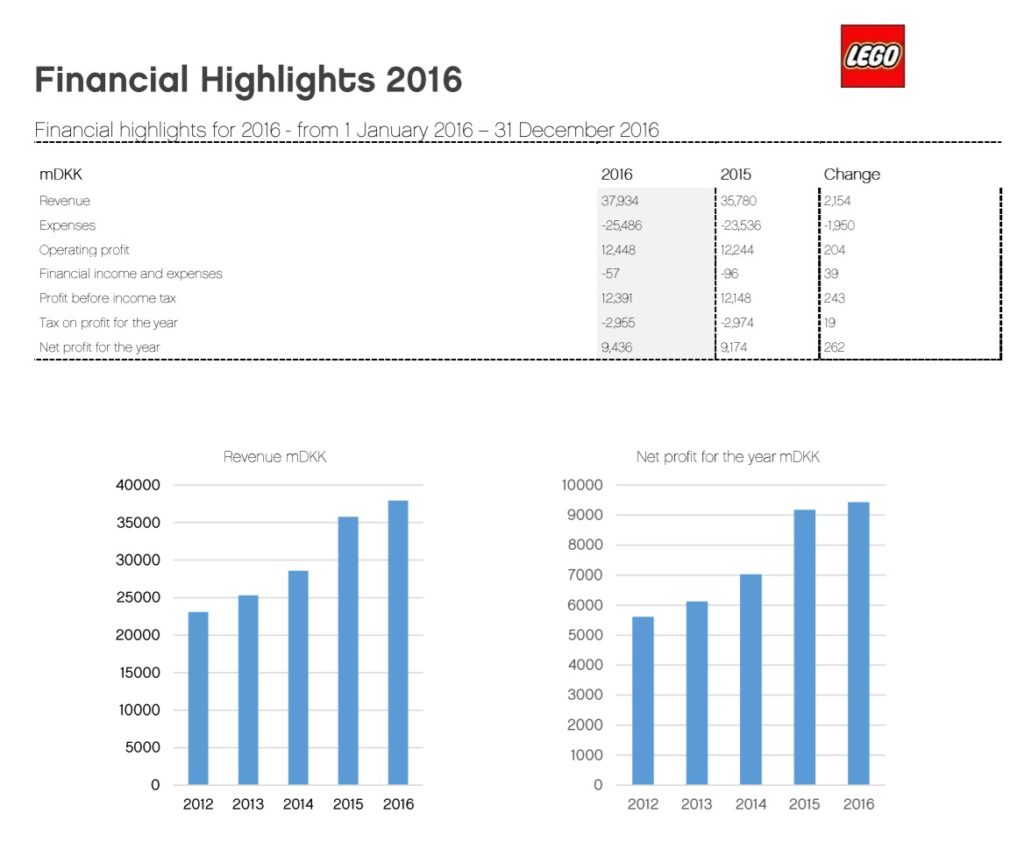 Overall, 2016 has been a pretty good year for LEGO – they’ve made record revenue numbers and positive growth both in terms of revenue and profits but there are a few indicators LEGO’s meteoric growth is starting to slow.

The main takeaway is that revenue has never been higher for LEGO, with the Danish company raking in DKK 37.9 billion (AU$7.11bn) in revenue, up 6% from 2015. Single-digit growth is great, but it’s nowhere near the 19% growth that they experienced in 2015 compared to 2014.

The LEGO Group is still remarkably profitable, earning DKK 9.4 billion (AU$1.76b) in net profit in 2016, as compared to DKK 9.2 billion in 2015. LEGO’s net income seems to be plateauing, especially if you compare that against last year, where their profits grew by 31%.

That said, 2015 was a pretty insane year for LEGO, obviously buoyed by the impact of 2014’s The LEGO Movie and all the new and returning LEGO fans it generated.

LEGO of course haven’t been sitting on their laurels, and their profits were probably eaten into by all the investments that they’ve committed such as expanding their factory and production capacity, especially their fancy new plant in China to serve the Asian market. They’ve also massively increased their headcount to scale towards growth.

Not to mention the research they’re doing into achieving their targets of switching to sustainable plastic/materials for LEGO bricks by 2030.

There is a bit of concern with the numbers. LEGO’s growth has been driven primarily out of Europe and Asia, whereas sales in the USA (its largest and most important market) has been flat, despite a significant bump in marketing spend.

I don’t live in the US, so I’m not that aware of what marketing has been done there (I’m assuming a lot of in-store stuff and digital/social ads) but as a marketer in my day job, this is a bit of a red flag for me.

There were also some pretty concerning statements out of LEGO’s executive team with LEGO’s outgoing CFO John Goodwin stating that “Our activities in the US did not lead to more consumers buying our products. We are continuing to look into that and analyse where potential opportunities are to reach more consumers.” 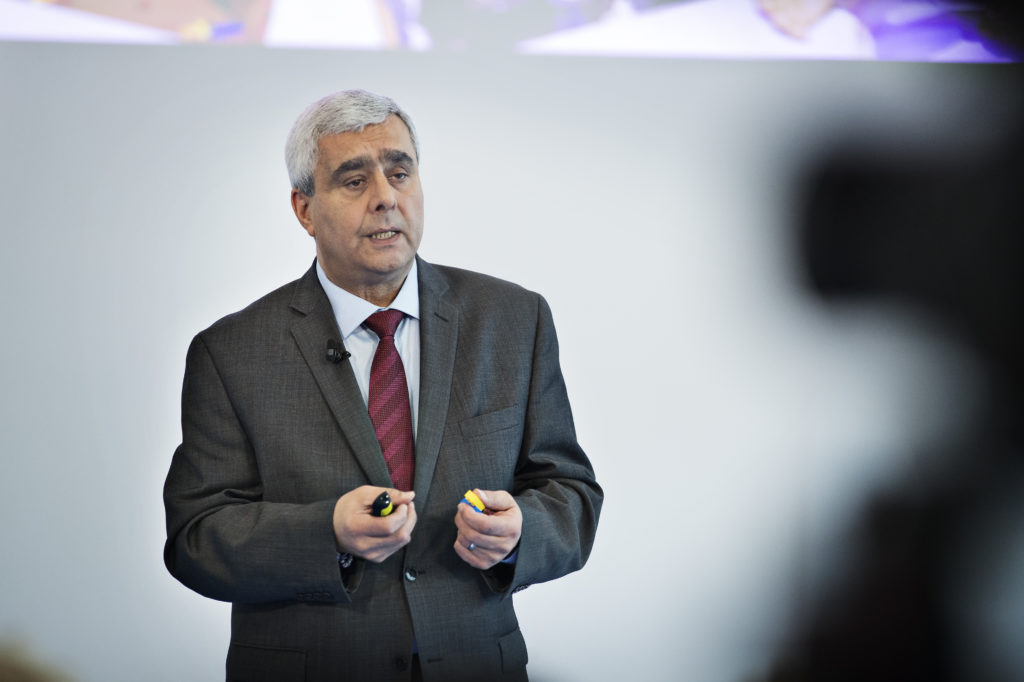 LEGO’s new CEO, Bali Padda also echoed Mr. Goodwin’s comments, saying that they (LEGO) didn’t quite understand what went wrong in the US.

“This is something new to us and we’re trying to understand what needs to happen,” said Mr. Padda. He also added that they would continue analysing whether changing consumer preferences or misdirected marketing spending caused sales to flatten. (via WSJ).

I have a theory that LEGO poured an insane amount of money into Nexo Knights, their “big bang” theme in 2016, with apps, animated shows and a huge retail presence, but the theme has failed to capture the imagination of LEGO’s core audience of kids.

That said, I do respect Mr. Padda admitting that they weren’t sure why and were committed to finding out the exact cause of flat sales in the US. I have tremendous respect for executives who aren’t afraid to say “I don’t know”, instead of coming up with some bullshit PR spin excuse.

LEGO doesn’t comment specifically on individual regions, and for a market as small as Australia, we’re typically overlooked. Upon closer inspection of the Financial Report, Australia did warrant a mention, but not for positive reasons.

Yup, Australia and South Korea were singled out in the APAC region as being “declining” toy markets in 2016. It all makes sense why retailers started discounting LEGO sets like crazy in the second half of the year. Here in Australia, 30% became the new 20% threshold to buy LEGO on discount.

It’ll be interesting to see how LEGO copes this year, especially with a lot of price increases on LEGO sets which may dampen the ability of fans to buy as much as they previously could have. I know, my LEGO purchasing has slowed down slightly because I don’t see a lot of great value sets on the market. That and I’m running out of display/storage space at home, heh.

In addition to the profits and revenue, further digging into the wealth of material that they’ve published to accompany their annual report reveals some very juicy nuggets of information. 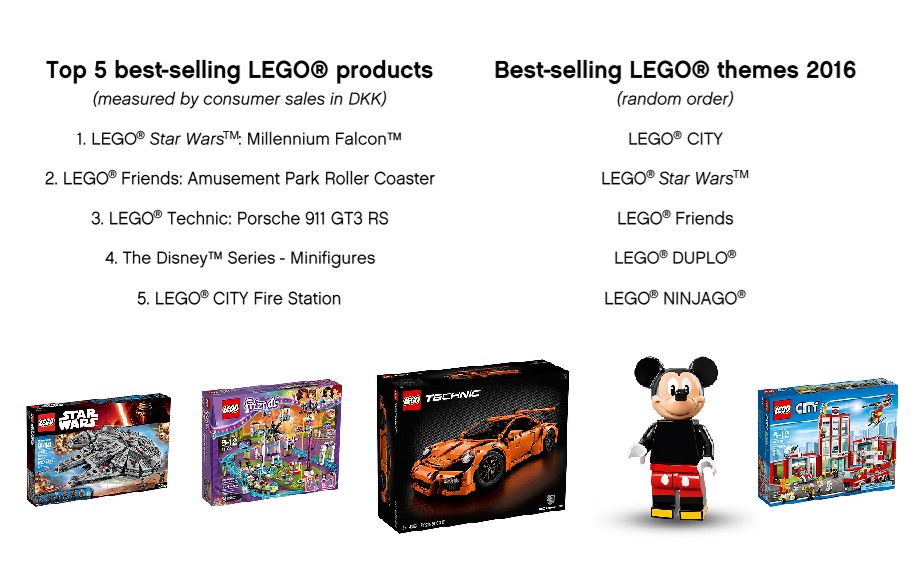 We already knew that the top 5 best selling themes for LEGO in 2016 (in no particular order) have been City, Star Wars, Friends, DUPLO and Ninjago. Ninjago was a big surprise, given that outside of bringing the theme back, LEGO haven’t really invested much marketing (that I can see) into the theme, as most of their focus has been on Nexo Knights.

Nexo Knights not being on the list of Top 5 best-selling themes is quite telling and I think that the theme’s days are numbered.

Apart from themes, we also got a peek at the Top 5 Best-Selling (by total sales value) LEGO products in 2016, which was buried in the 2016 Facts document.

We have 75105 Millennium Falcon leading the pack, followed by the Friends Amusement Park Roller Coaster, the sublime 42056 Technic Porsche 911 set, the Disney Minifigure Series and the City Fire Station.

The Porsche 911, and Friends Roller Coasters were quite a surprise for me, but it’s great to see big D2C sets like the Porsche selling incredibly well. 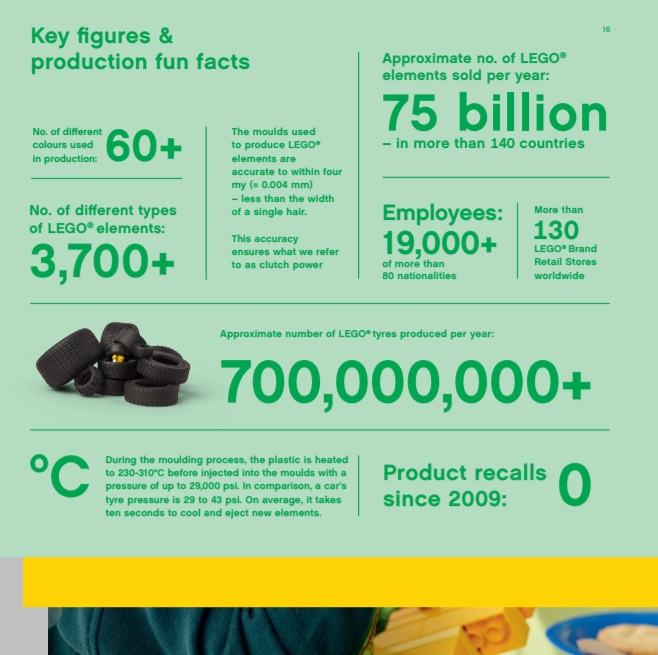 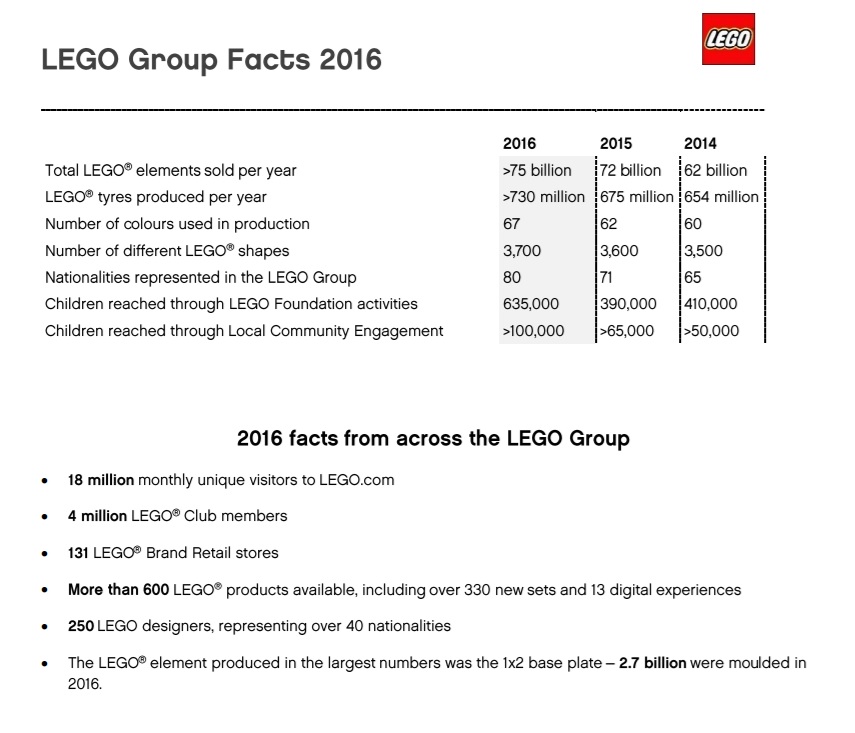 There’s also some neat factoids on LEGO elements produced, number of colours used and a grand total of 3,700 LEGO elements that are currently used in production!

I also thought it was great that AFOLs and LUGs got a special mention in the report.

If you’ve ever wondered why it feels like you’re suddenly paying more for licensed sets, it might interest you to know that LEGO are spending a lot more on licenses and royalties.

Lastly, there was this brilliant timeline of The LEGO Group, charting the company’s genesis and journey to where they are right now.

So yeah, I think LEGO have quite a challenging year with 2017. Obviously The LEGO Batman Movie and Ninjago Movie will give them a huge boost, and we have Star Wars Episode VIII sets to look forward to as well.

I would really like to see LEGO try and arrest some of the rising prices of its sets, which I think may be quite prohibitive especially for families and parents that don’t have a huge budget to spend on toys.

I would also like to see LEGO leverage their position as one of driving forces of pop culture on the planet to strike up more partnerships with properties and brands. BrickHeadz is a step in the right direction, and I hope we see more out of the theme, outside of licenses that we’re familiar with.

It still confounds me that LEGO has not bothered to court Nintendo as a license, and I fear that they may have missed the boat on that one.

So yeah, that’s my thoughts on LEGO’s 2016 Annual Report. I’d love to know what you thought of the results and if there’s anything in particular that jumped out at you. If you’re from the US, I’d also like to hear from you and if you agree that sales and general hype around LEGO has been flat in the past few months.

If you’d like to dig through the documents released alongside the 2016 Annnual Report, which I do recommend if you have time, you can check them out via the following links.