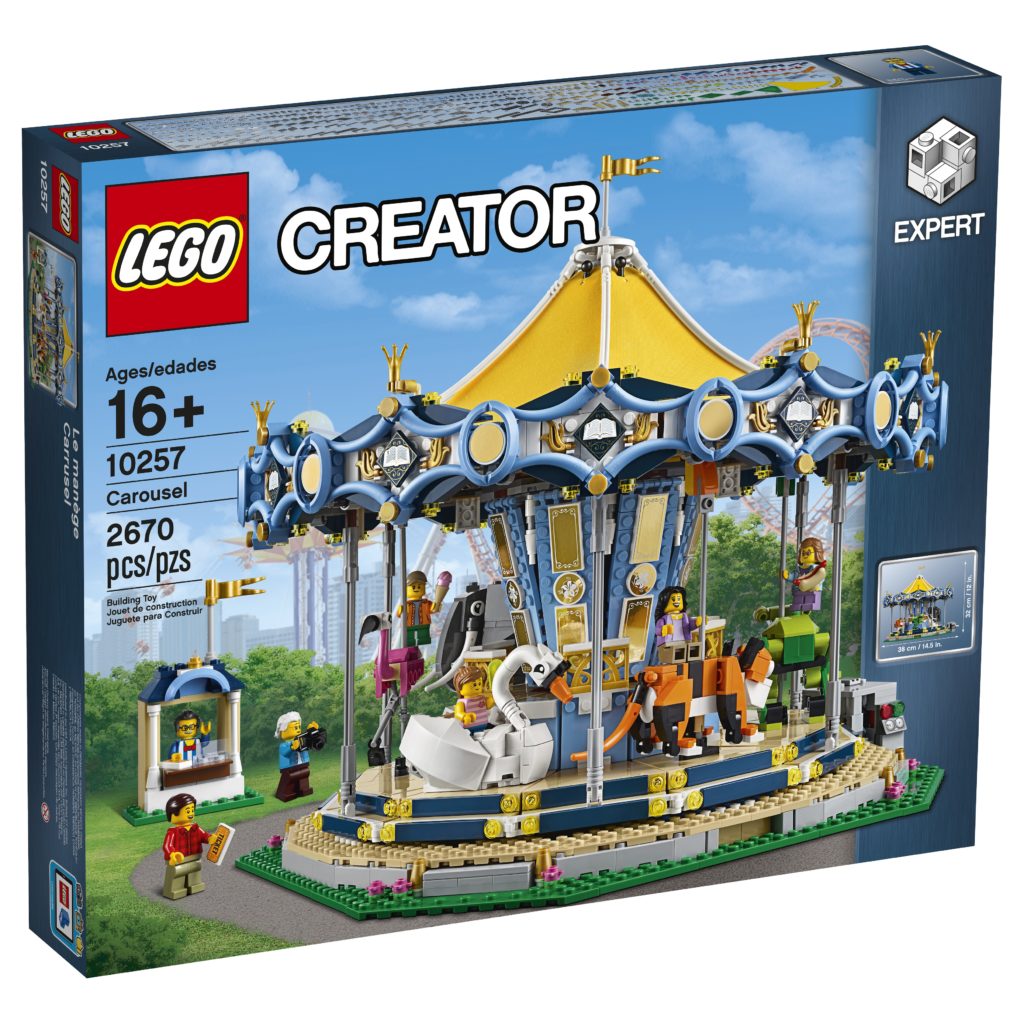 Prepare to be astounded by the majestic LEGO 10257 Creator Expert Carousel, the star attraction in your LEGO Fairground! This beautiful LEGO merry-go-round comes packed with a range of clever play features that is bound to make this one of the most exciting LEGO sets of 2017.

The LEGO.com links are now live, so check them out for your respective countries and bookmark the link ahead of its release in June!

Update: The LEGO Creator Expert Carousel is now available for purchase for LEGO VIPs! Make sure you’re logged in to add the Carousel to your cart! 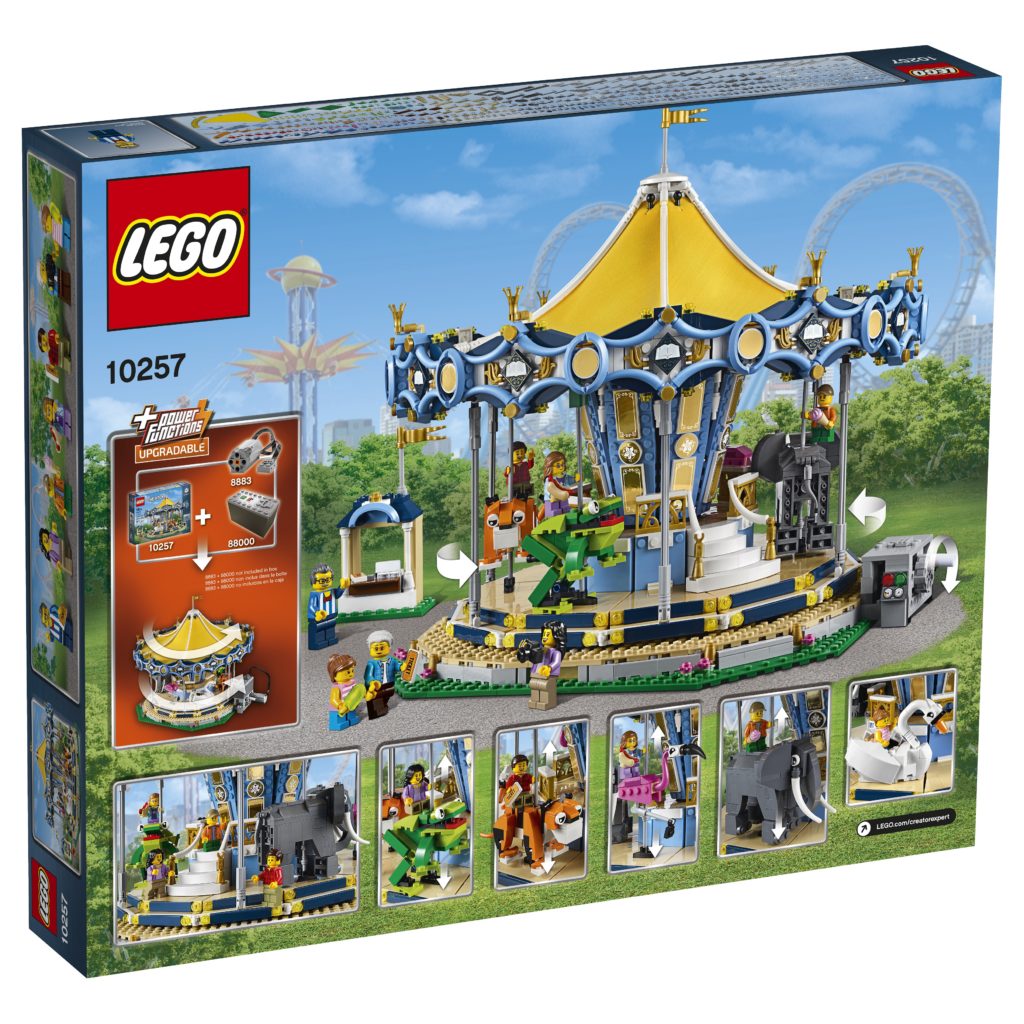 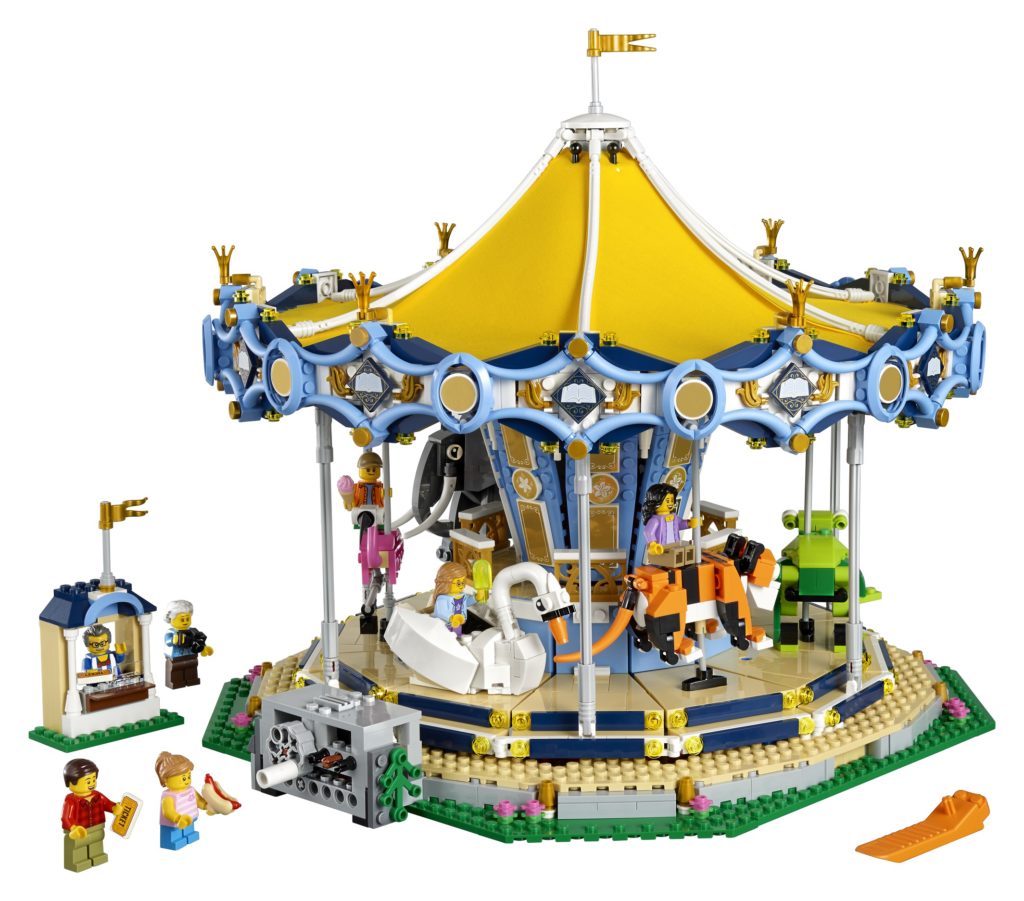 First of all, what can I say – this is such a stunning LEGO set, and a more than worthy addition to your LEGO Fairground. It’s the perfect accompaniment to your Fairground Mixer and Ferris Wheel, ensuring that the ever-expanding LEGO Fairground becomes more exciting each year with new rides. 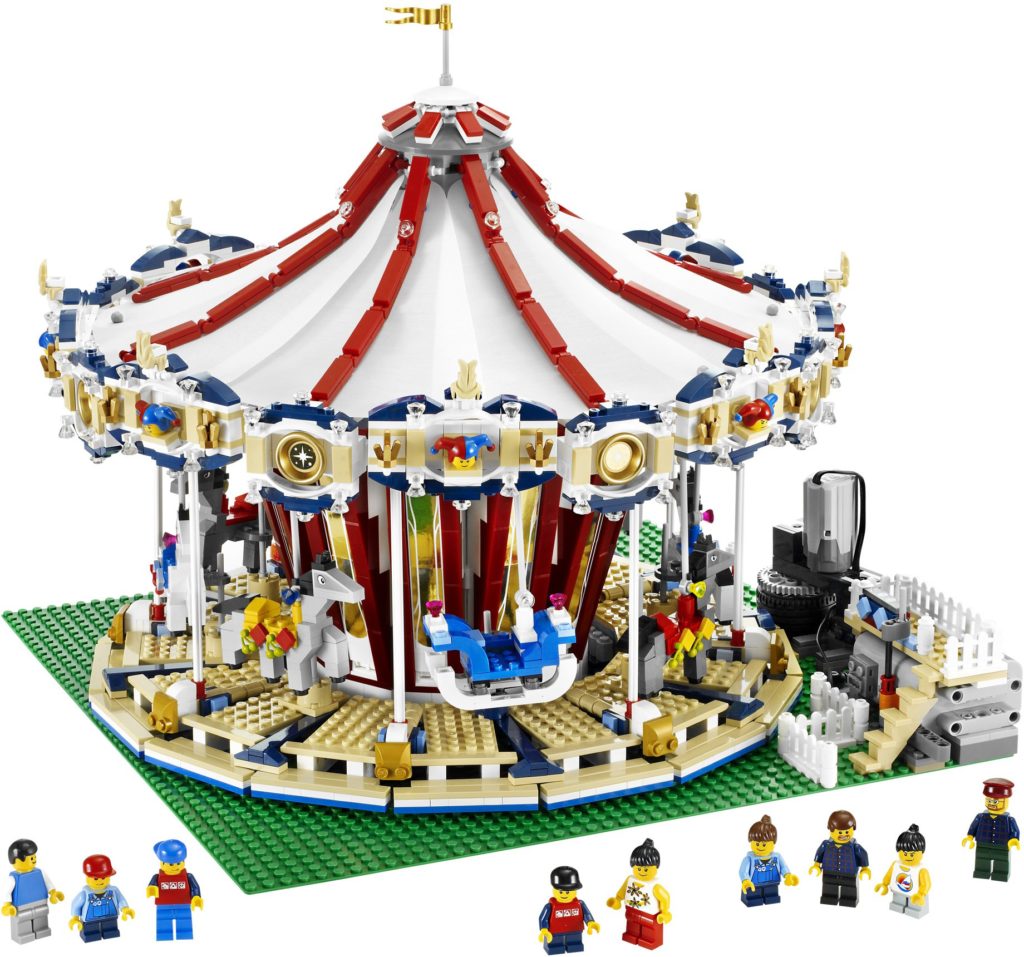 10257 Carousel can almost be considered as a spiritual successor or remake of 10196 Grand Carousel, one of the most prized LEGO sets in history that’s incredibly out of reach for regular LEGO fans.

The average price for a new Grand Carousel on Bricklink is about AU$4,600, just in case you were wondering. 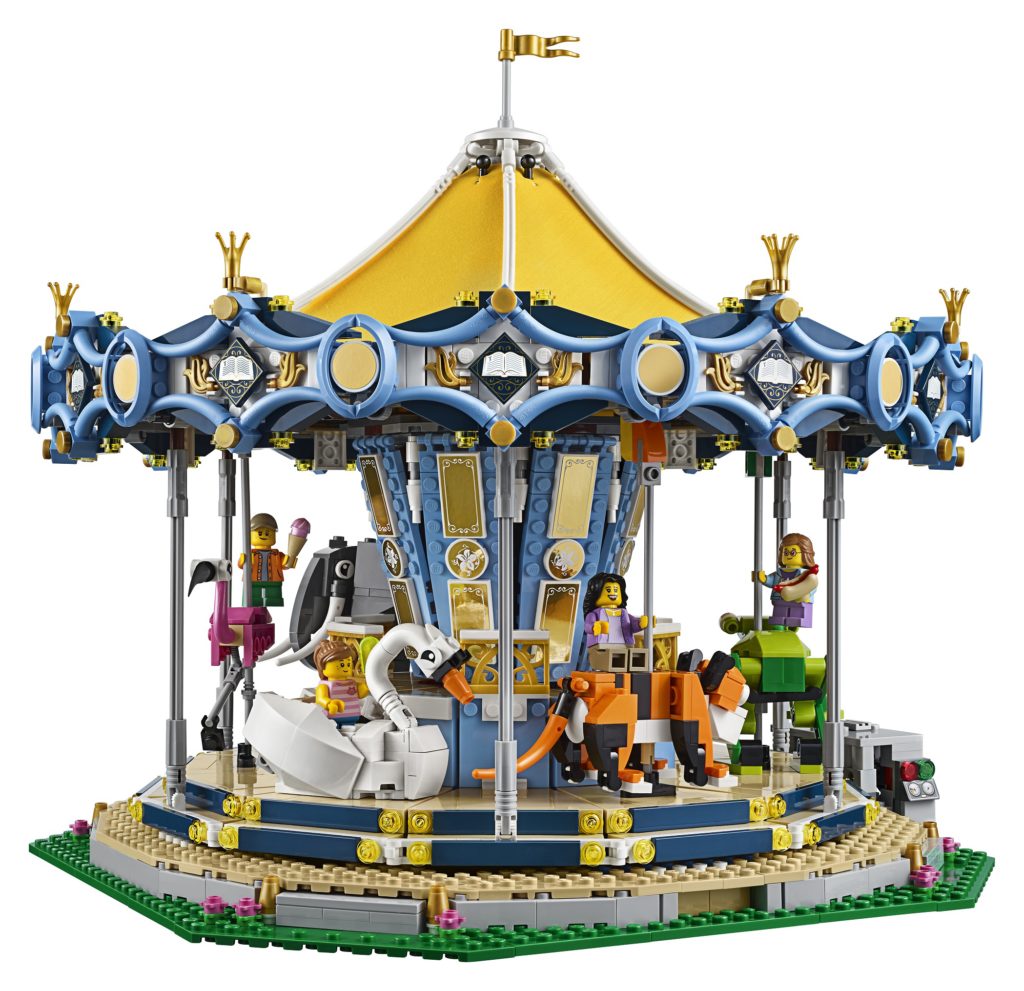 The Grand Carousel was released way back in 2009 and LEGO fans have been clamouring for either a re-issue, and I think the 2017 version will make LEGO fans incredibly happy.

I’m kinda glad that it’s not a 1:1 remake and that LEGO have employed a rich and very attractive colour scheme as well as all-new animal rides to give it an identity of its own.

What really stands out for me is the yellow textile canopy which goes very well against the light blue detailing and golden accents. 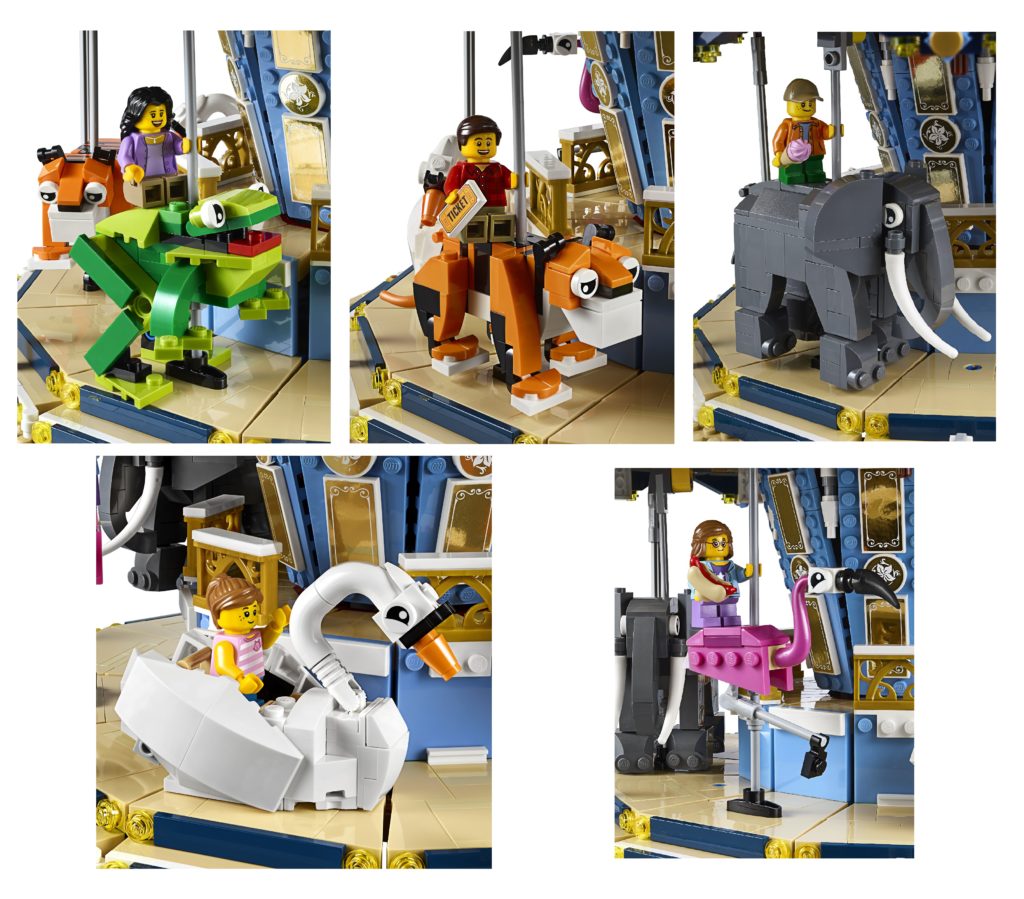 One of the highlights of the new 2017 LEGO Carousel is the brick-built animal rides. There are 5 rides for the minifigures to go on, comprising of a frog, (a very sad-looking)tiger, elephant, swan and a pink flamingo.

The original Grand Carouse only had horses and carriages – the animal rides here gives the Carousel a much more playful vibe. 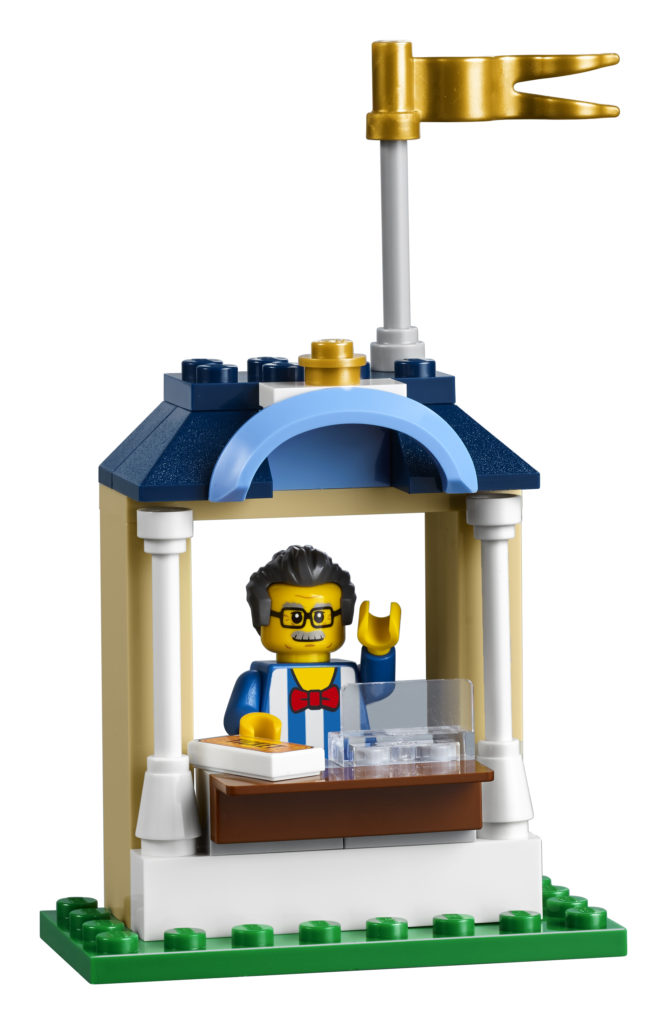 Here’s the ticket booth where the ride operator sells tickets to go on the merry-go-round. A new element is the printed ticket tile which you can see in the photo above. 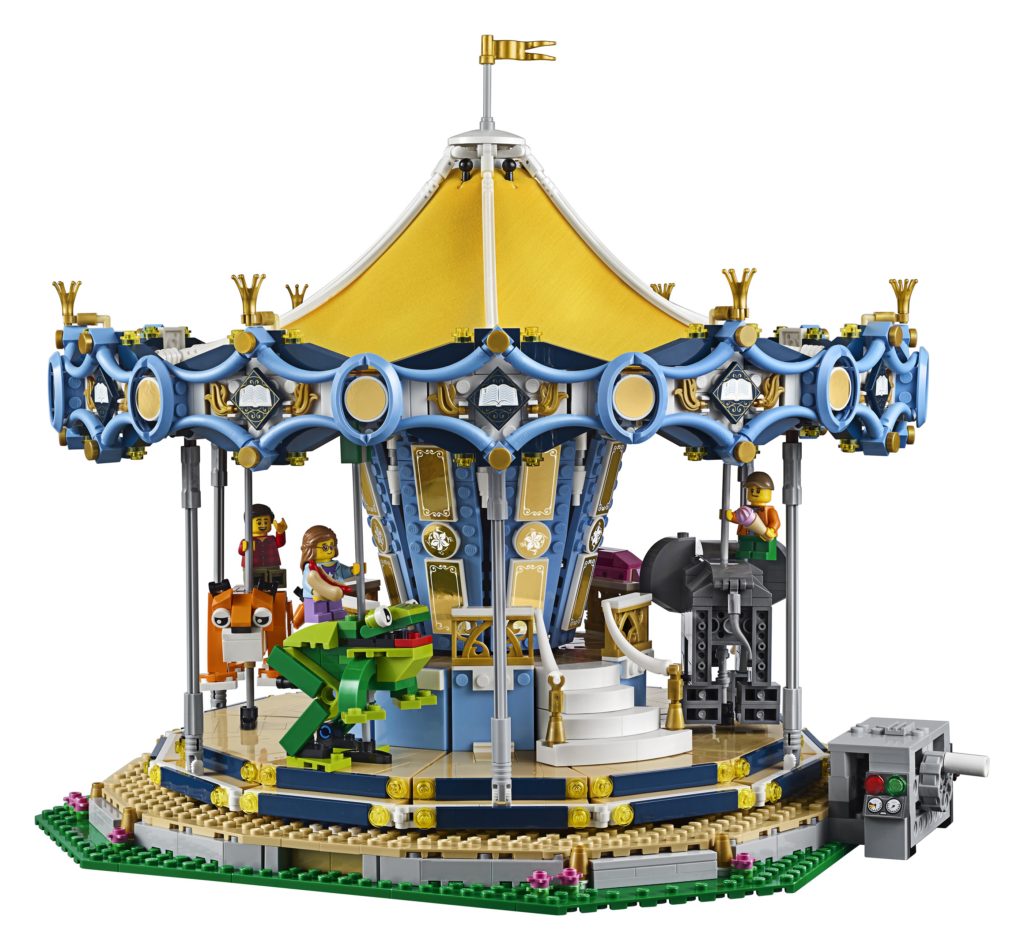 What really brings the Carousel to life is its defining feature – the ability for the rides to rotate. This is achieved by turning the crank that you see above on the right, which sees all the animals move up and down as they circle around the core of the carousel.

It’s a really beautiful and elegant effect that you’ll have to see it in the flesh by checking out the designer video below.

You can also motorise the Carousel by adding Power Functions if you’re not a fan of manually cranking it. 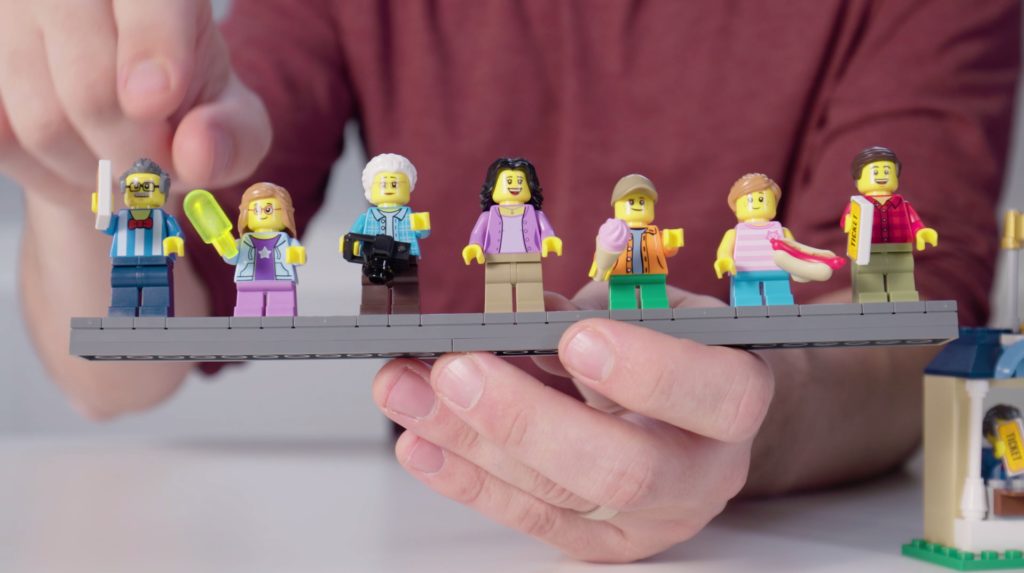 There are 7 minifigures included in the set, the ticket booth/ride operator, a small female child and her grandmother, and a family of 4. 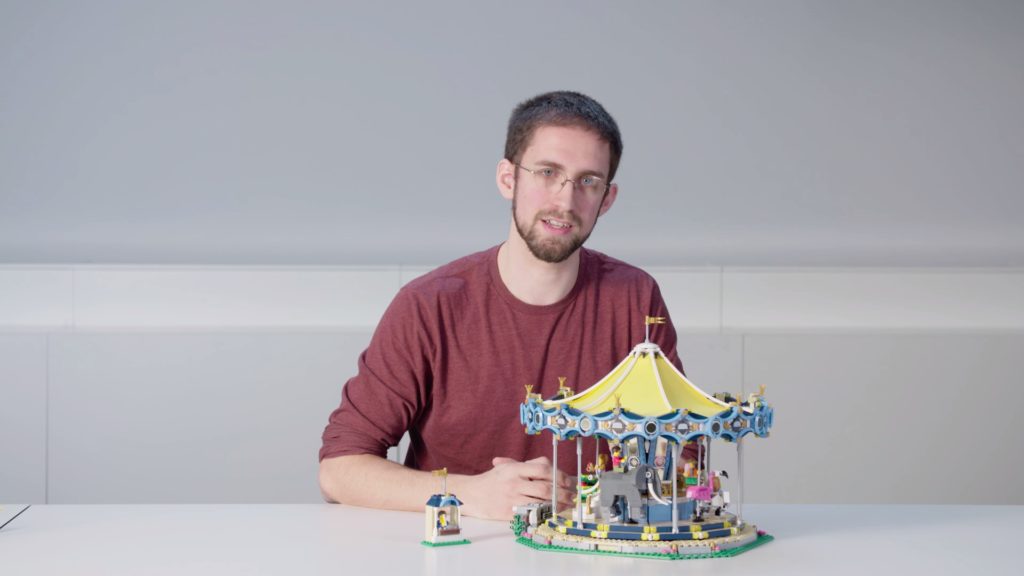 Unfortunately, one of the most endearing features of the Grand Carousel, the sound brick which played carnival music did not make it to the new Carousel. This is kinda disappointing, as you’d usually associate merry-go-round music to carousels and the sound brick was what made the original Grand Carousel such a unique and charming set.

I can understand LEGO’s perspective of not including one to keep the cost low, and when the set only retails for US$199.99, it’s hard to argue against that. That said, I think an updated sound brick would’ve instantly made this an exceptional set.

I’m really excited about 10257 Carousel and cannot wait to get my hands on it. The Grand Carousel is a LEGO fan-favourite, and this one seems like a slight upgrade thanks to the contemporary design, fresh new colour scheme and clever use of LEGO elements for the tiny details.

It has all the hallmarks of a classic LEGO set and is going to be a really popular model once it hits the shops in June.

What are your thoughts on 10257 Carousel? I’d love to know what you think of this set in the comments section and if this is going on your to-buy list!

« A couple of really good deals at David Jones & Myer [AU]
Build and blow up a massive LEGO Death Star in Sydney for Star Wars Day 2017! »

It's Christmas, and LEGO were kind enough to gift

I'm giving away a copy of 10308 Holiday Main Street on my Instagram page!Click the link to find out how you can win one!LEGO gifted me a spare, but I already received one for review, so this one is being given away in the spirit of Christmas! Also, keep an eye out for more giveaways as we count down to Christmas! www.instagram.com/p/Cl5mbB4Pii4/ ... See MoreSee Less

It's Christmas, and LEGO were kind enough to gift me an extra copy of 10308 Holiday Main Street! I already have one, so I've decided to give this copy away in the spirit of Christmas! 🎅 Check out the rules to enter below, and good luck! To enter: - Follow @jayong28 on Instagram - comment your favourite LEGO set of 2022 and tag two (2) friends in the comments - Entries close when this post is 24 hours old (9/12/22 730pm AEDT) - One entry per person - One winner will be selected randomly - Giveaway open worldwide* - Judge's decision final * if you're in Australia I'll ship my copy to you. If you're elsewhere, I'll attempt to order one online to send to the winner, OR if the set is unavailable, I'll be happy to swap it for another set (or sets) of equivalent menu. #giveaway #lego #legowintervillage #legochristmas