So the strangest thing happened today. I was browsing through a random Kmart when I chanced upon some empty LEGO shelves which had a whole bunch of new price tags on it. There were no sets and each price tag was obscured by one of those green Product Temporarily Not Available slips. Curiosity got the better of me and I shifted  those slips away and I discovered prices for the upcoming wave of 2015 Avengers Age of Ultron sets!

I was very very surprised because the Avengers sets Australian release date was supposed to have been March 2015, alongside the DC Superheroes sets. It was also a big deal because this is (to my knowledge) the first indication of Australian pricing of the Avengers sets! They’re not listed on LEGO.com yet, so it was great being able to find out the local prices.

Please keep in mind that Kmart usually prices their LEGO slightly below RRP, although the exact amount seems to fluctuate wildly. These prices will not be completely indicative of the actual RRP of the Marvel sets, but it’s all we have now till the sets get listed online or leaked elsewhere. For example, I also saw a tag for 76026 Gorilla Grodd Goes Bananas on the shelves and it was priced at $79 – only 1 dollar below RRP.

Without further ado, here’s a Jay’s Brick Blog exclusive look at the Kmart prices for the Avengers Age of Ultron LEGO sets.

Not too bad, honestly! I think the Quinjet, Hulkbuster and Avengers Tower are all decently priced, being licensed sets and all. The Quinjet’s European price is €85, which makes our price of $129 not that far off the mark.

Like I pointed earlier, these sets aren’t supposed to be on the shelves yet and I have no idea why these price tags are out on the shelves when it’s nowhere near March yet. I have a few theories: 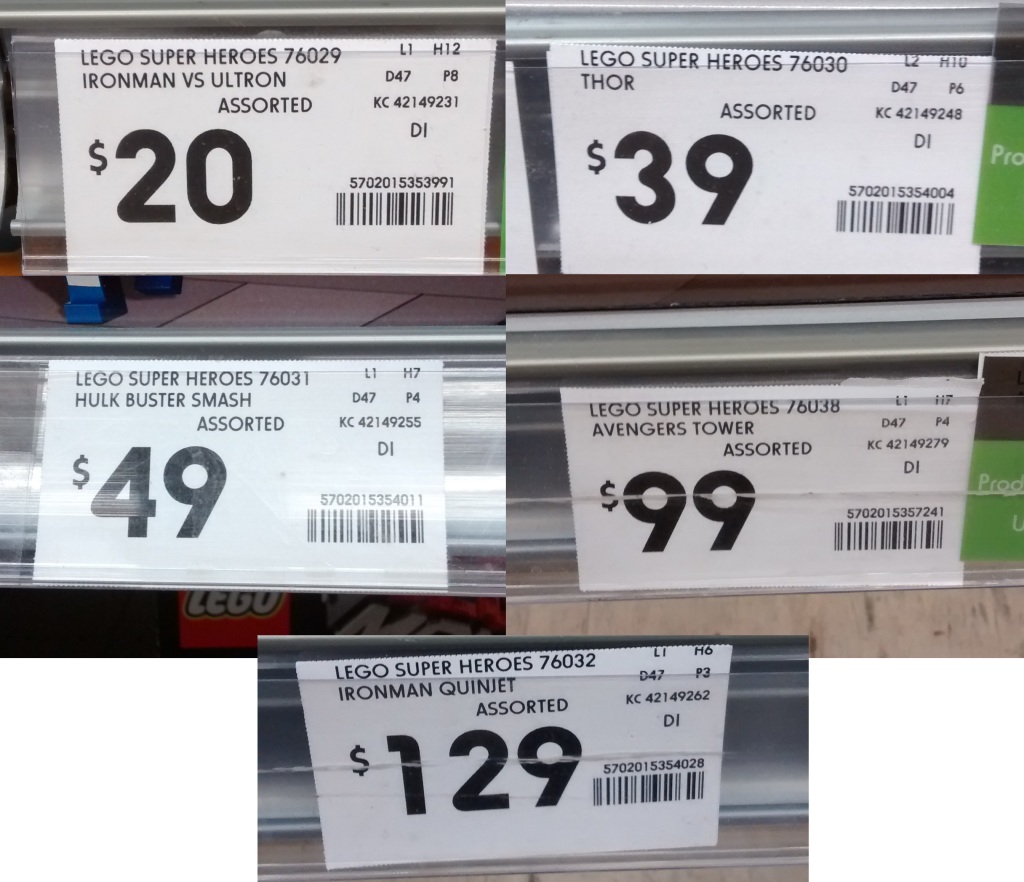 Oh and here’s proof, in case you think I’m drunk. I did ask a sales assistant to check if they had any in stock (I was hoping they were in the storeroom or something) but they all showed up as having 0 stock. She did also say that they have ordered the sets and they should arrive soon. Take that anecdotal insight with a little grain of salt.

I honestly think that it’s option #1. Also on the shelves were some of the other price tags of sets that are actually supposed to show up in February such as the new LEGO Movie sets, Ninjago 2015, Bionicle, Star Wars and curiously enough… Speed Champions as well. I might post up the Speed Champions price details tomorrow, it’s way past my bed time now!

The only set that didn’t have its price tag in Kmart was 76041 Burglary at the Hydra Fortress. I think this set will be an exclusive to a retailer and explains why there aren’t any official photos of it on the internet.

Anyway, hope you guys enjoyed my little bit of investigative (and serendipitous) reporting. Have your say in the comments section!

(told you we were going hard on Super Heroes this month)