Despite getting stuck in traffic this morning, I am in an absolutely DELIGHTFUL mood today! I’m just overwhelmed schadenfreude which is a German term for finding pleasure in the misfortune of others.

Guess what happened last week? Apparently there was a new movie premiering in Australia. Some new LEGO animated movie based on the popular Batman character? I don’t know. You’d think that being one of the top LEGO blogs in Australia (and the world), I’d have made a post about it or something.

I guess I conveniently forgot. Oops 🙂 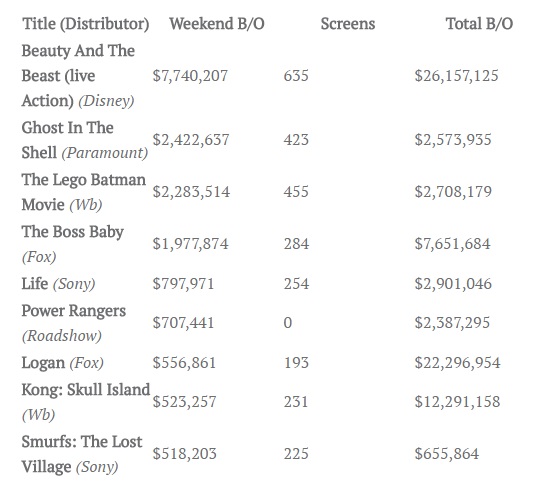 The Australian weekend box office numbers are in and it looks like The LEGO Batman Movie has fallen flat on its face, taking in a pitiful $2,283,514 at the weekend box office, bringing its total take to $2,708,179 since it opened in cinemas FORTY EIGHT DAYS (emphasis mine) after the US and most of the world.

The LEGO Batman Movie only managed to squeak in a lame third place at the weekend box office, crushed by Disney’s juggernaut of a movie, Beauty and the Beast, as well as Ghost In The Shell, which opened in fewer cinemas than LEGO Batman.

Yes, Ghost In The Shell, the live action remake of a classic Anime that is for all intents and purposes considered a huge flop.

Now, $2.7 million dollars is still a lot of money – certainly more than I make in a week. Also, finishing third in a race isn’t all that bad right? I mean, that’s a Bronze Medal at the Olympics right? 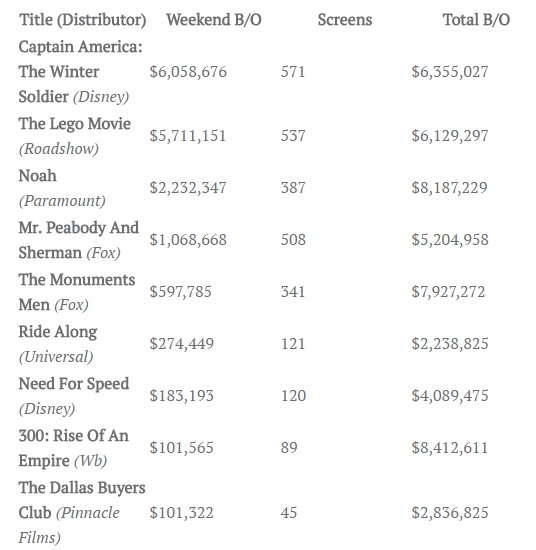 The LEGO Batman Movie’s dismal performance at the Australian box office becomes all the more apparent when you compare it against 2014’s The LEGO Movie, which managed to draw in a very respectable $5.7 million dollars in its opening weekend, narrowly edged out by the mega blockbuster that is Captain America: The Winter Soldier.

Wow. That’s more than a 50% DECREASE in Opening Weekend takings!

I’m no mathematician but that cannot be good.

Let’s see what Graham Burke, Village Roadshow CEO had to say when pressed for a reason why The LEGO Batman Movie was delayed to the school holidays by CNET.

“Yes, we will lose a lot to piracy, but the other side of the coin is the film is available when the audience that goes to these sort of films wants to see it,”

“When certain films go out in non-holiday periods, our audiences get very cross because the kids are not available to take them to them.”

“We’ll still lose a lot of money to piracy at this point in time. But it was a trade off. There will be more money lost by having it released in a non-holiday period as opposed to releasing it when the people want to see it.”

And what of the public response? Burke says Roadshow has received emails from some 14 people “expressing their disappointment.”

“That’s not a massive backlash,” he said.

Don’t know about you, Mr. Burke, but it sure does seem like audiences aren’t really taking on to LEGO Batman.

As CEO, I am looking forward to seeing how he justifies this to his shareholders.

I have no doubt that piracy will be blamed. But maybe…. just maybe choosing to premier The LEGO Batman Movie against Beauty and the Beast was a terrible idea.

Not to mention there being a much more competitive school holiday period with The Boss Baby luring other families who may have less of an appetite for superhero-themed movies.

What would The LEGO Batman Movie have gone up against if it has opened on 10 February along with the US? It would have to compete against Fifty Shades Darker, Fences, A Street Cat Named Bob and even a bloody Yugioh movie from the week prior.

LEGO Batman on literally everyone at Village Roadshow

I’m not a cinema expert, but you can see how dumb Village Roadshow’s decision is to take Beauty and the Beast head on.

The numbers for The LEGO Batman Movie will no doubt improve, since we’re at the start of the school holidays, but the question remains, by how much? Beauty and the Beast doesn’t seem like its slowing down, and if you asked a random parent which movie they’d prefer to bring their kids to during the holidays (if they could only choose 1 since going to the cinema is bloody expensive), I’d bet you Beauty and the Beast will win each time, unless the family is really into LEGO.

But you know what I also think is a factor in The LEGO Batman Movie flopping at the box office? Village Roadshow’s despicable and arrogant treatment of Aussie LEGO fans.

Imagine if they had relented and had the humility to admit that maybe, maybe they were wrong and to make things right. The Australian LEGO fan community would’ve rallied behind the movie and the word of mouth would have been phenomenal.

I (and other Australian LEGO influencers) would’ve been more than happy to promote and get people into the cinemas. Not to mention, the spillover effect from the social media buzz driven out of the US (y’know, the cultural nexus of the world) would’ve also helped increase the hype for the movie.

That’s why I’ve not bothered to post about Australian premiere of The LEGO Batman Movie at all. I’ve also been true to my word – I’ve not and will not watch it in cinemas here because I refuse to give Village Roadshow a single cent out of my pocket.

I do support the movie (I bought a ticket from a US cinema just so that I could contribute to THEIR box office figures) and will continue to push the LEGO sets.

But no, the utter contempt shown for Australian LEGO fans have finally produced its fruit, and it sure is a rotten pile of crap. 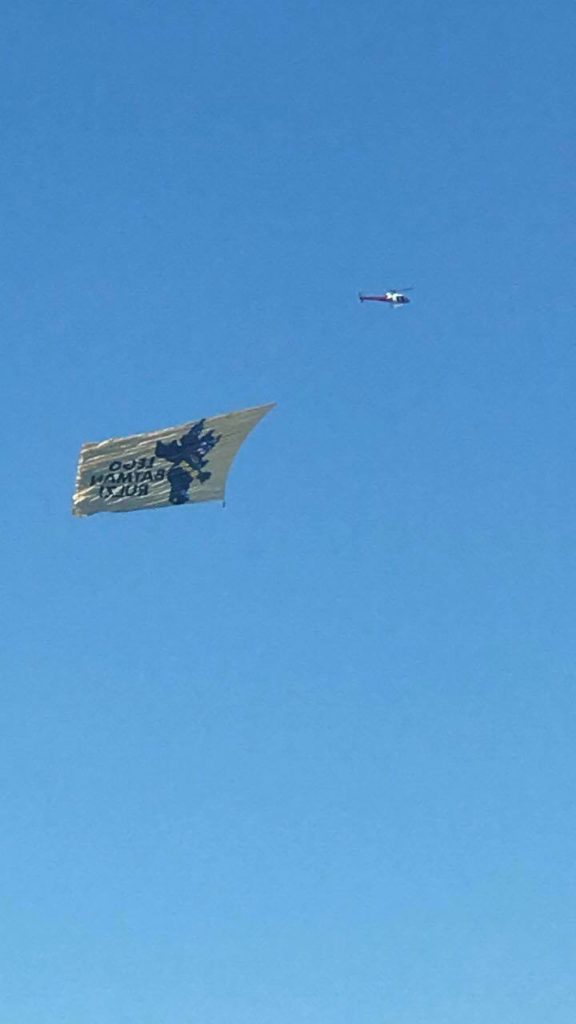 Guess that’s why they’re desperate and resorting to stupid advertising stunts like flying a helicopter banner over Melbourne. Well done! 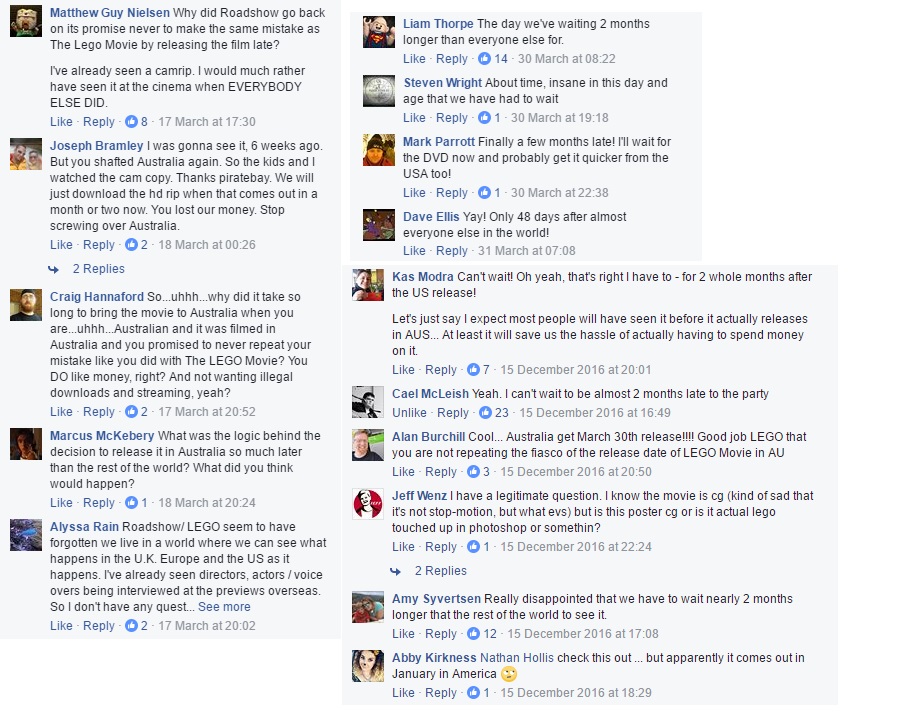 I have to also commend the Australian LEGO community for being so vocal about the delay, especially on social media. When you have LEGO Australia’s Facebook page being bombarded by complaints of the delay, you know you’ve lost all the goodwill from your biggest fans

So yeah, I look forward to tracking the progress of Village Roadshow’s monumental stuff-up at the box office. Something tells me that they’re going to lose WAY more than the $5 million they lost with The LEGO Movie.

Let’s see what excuse Graham Burke comes up with this time around.