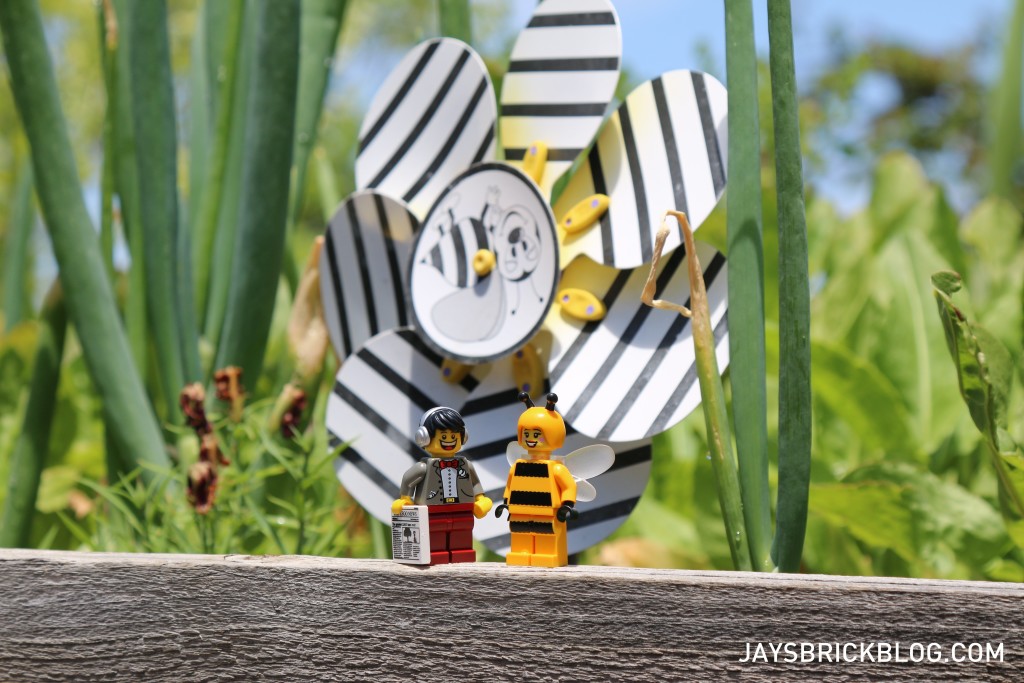 Last Saturday, I had the pleasure of attending Brickstameet, a LEGO-themed Instagram Meetup (aka Instameet) that was organised by the lovely folks at Federation Square and a couple of Melbourne’s most popular LEGO Instagrammers.

? Join @Brett_Wilson , @TheShortNews , @LLWorld & @CheepJokes (played by @CityLifeOfPieces) at @FederationSquare tomorrow for an Instameet! There will be a very special tour of Fed Square, @LEGO, photos and fun!!! Sorry in advance that I won’t be able to make it, due to prior commitments ? I look forward to seeing all your photos! #xmasatfedsquare #brickstameet #CheepJokes #lego #Melbourne #fedsquare #federationsquare

The Brickstameet was organised to showcase Melbourne’s Federation Square, one of the cities most iconic locations that is currently hosting the Southern Hemisphere’s tallest LEGO Christmas tree. If you haven’t been to Fed Square to check out the massive LEGO Christmas Tree, I wrote about my experience visiting it and snapped plenty of photos in case you’re unable to visit in person.

I really didn’t know what to expect with the Brickstameet – I follow a bunch of the organisers on Instagram and I had a Saturday free so I decided to rock up to to see what it was all about. I ended up having a fantastic time! 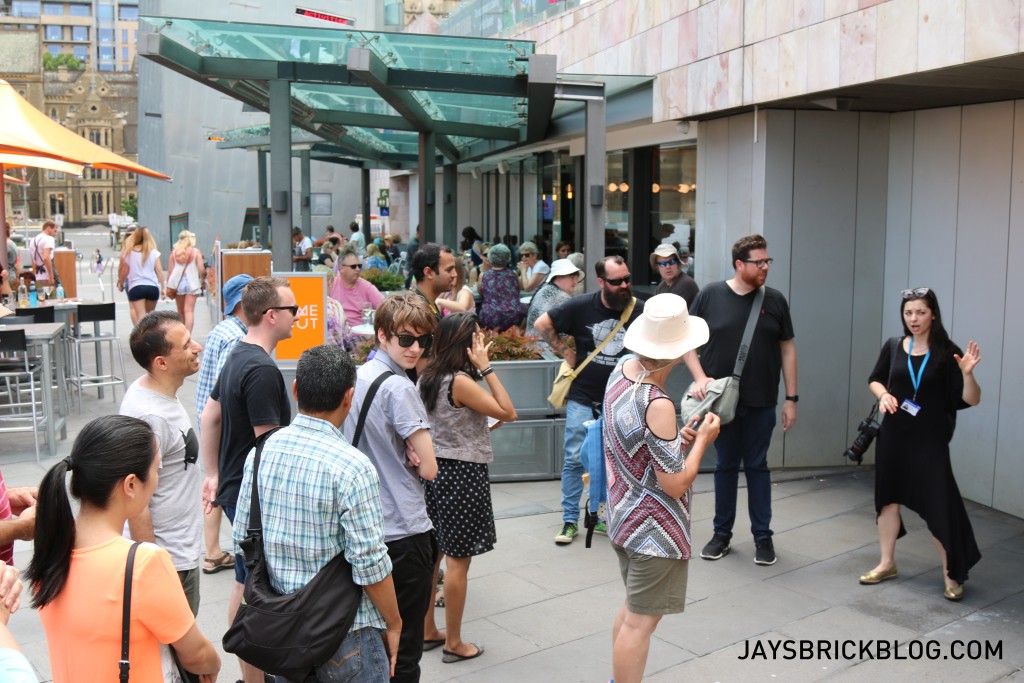 Introductions and briefing before our tour of Fed Square

Prior to the Brickstameet, I had only interacted with some of these guys online on Instagram and I don’t know about you, but I get pretty nervous when meeting people I know online for the first time. Turns out when I showed up, I didn’t feel that way at all.

There was a decent-sized crowd of Instagrammers who showed up and we congregated near the Christmas tree before meeting Kayla from Federation Square who acted as our tour guide and chaperone for the day. Everyone was really cool and it was extremely easy to connect with people there through our shared passion and love for the almighty LEGO brick.

So what goes down at a Brickstameet? 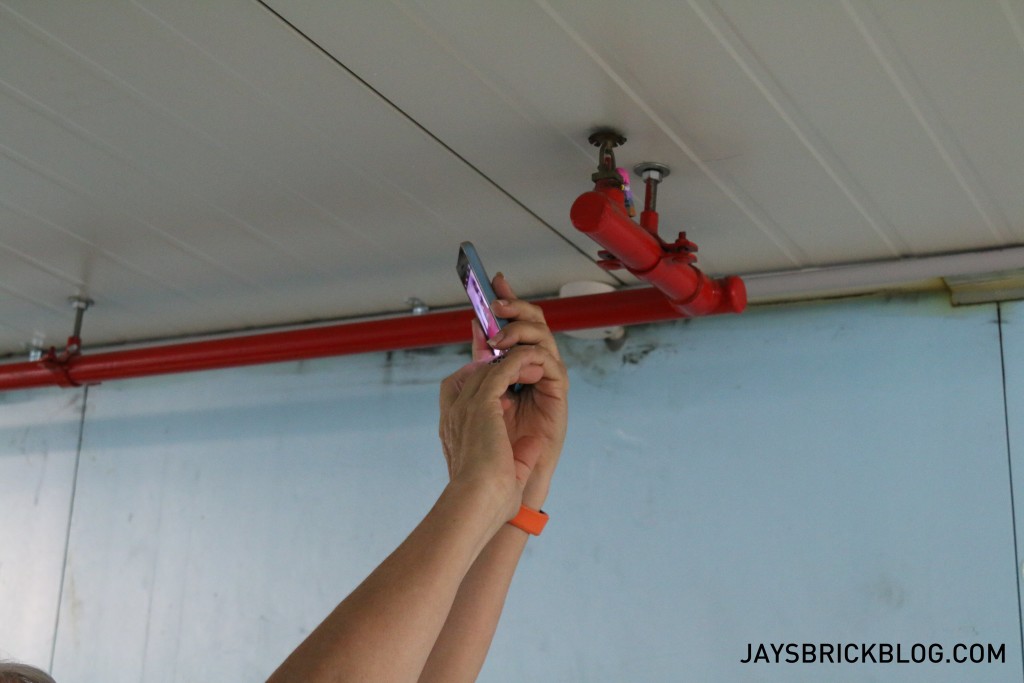 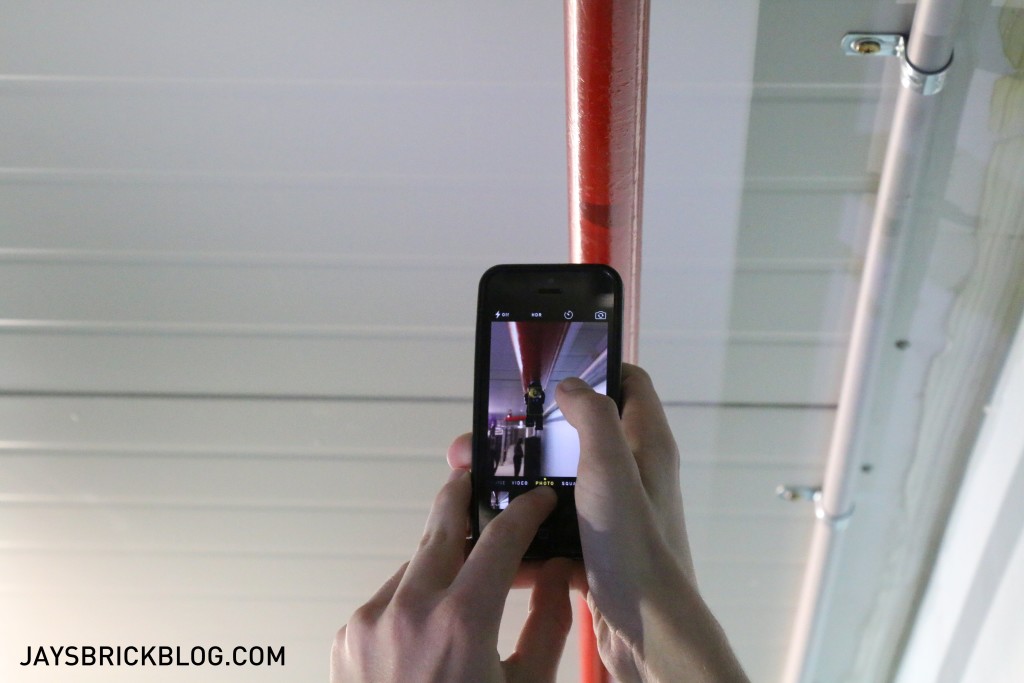 You guessed it – plenty of snapshots of LEGO minifigures in all sorts of different settings.

The thing I really love about the LEGO Instagram community is the emphasis on minifigure photography. In many ways, it’s very similiar to taking photos of people, except that with minifigures it’s all shrunk down and taken from a minifig’s perspective.

I personally think that LEGO photography on Instagram benefits from plenty of warmth, humour, and personality. It’s one of the best mediums for fans to showcase their creativity and how LEGO is embedded into their lives. 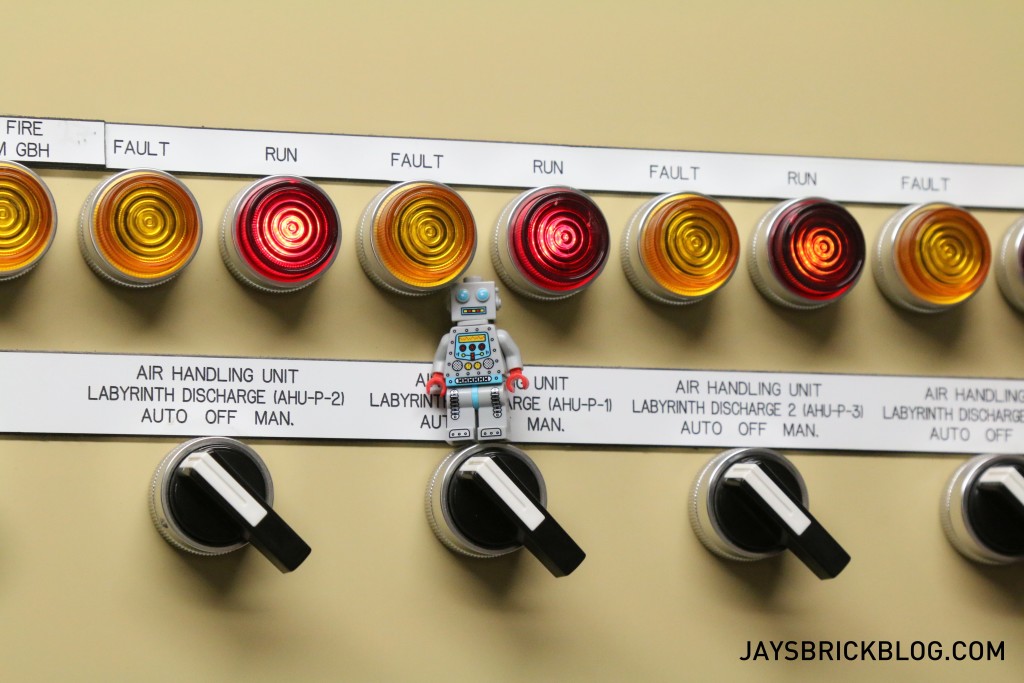 We started our tour with a journey into Federation Square’s labyrinth which features a really ingenious and sustainable method of regulating the temperature of Fed Square. It’s a little complicated but beneath Fed Square lies an intricate maze of concrete structures that act as heat sinks to cool air as it passes through.

Basically, air is pumped into the labyrinth and passes through a maze of corrugated concrete walls where it then cools and is then piped into The Artrium. The fact that it reduces the reliance on air conditioning is pretty damn clever.

I took a picture of Series 6’s Robot near one of the control panels during our tour. 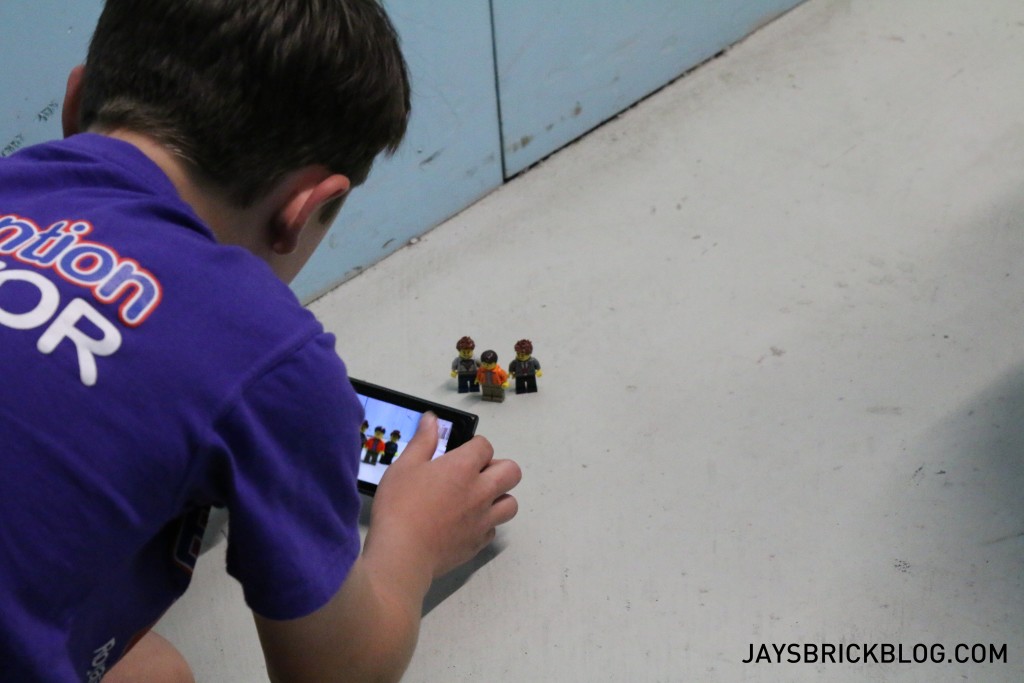 It was a pretty laid back tour, with plenty of stops for us to snap photos. Here’s a look at @captain_bricks doing his thing. 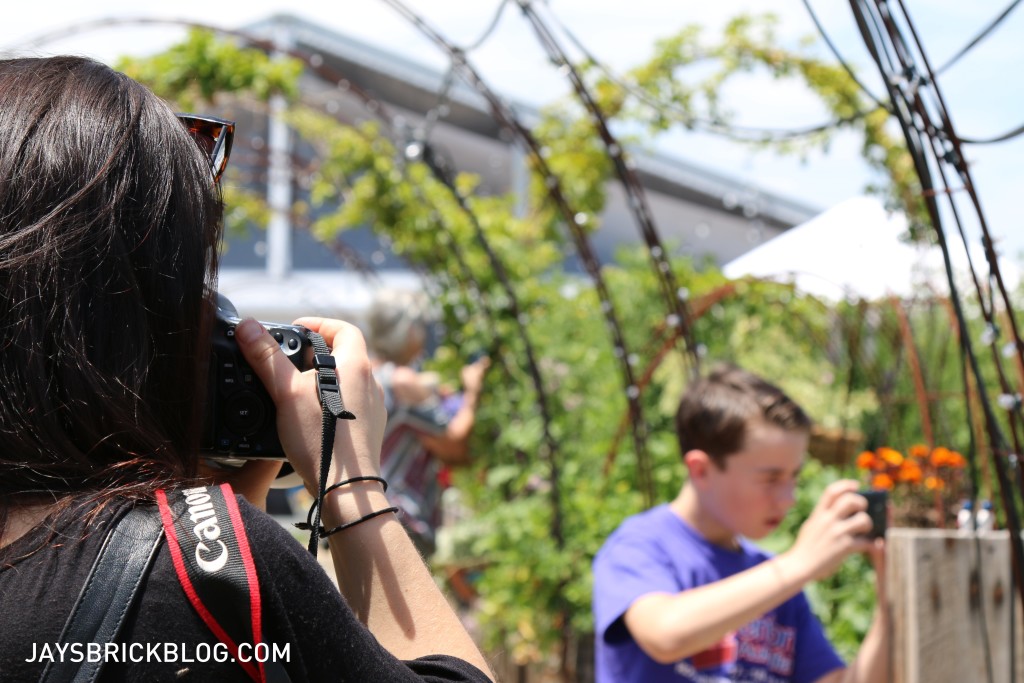 After the tour of the Labyrinth, we emerged into the sun and headed to the roof to explore the Pop Up Patch, a pop-up community urban garden where people can rent garden space to grow stuff. 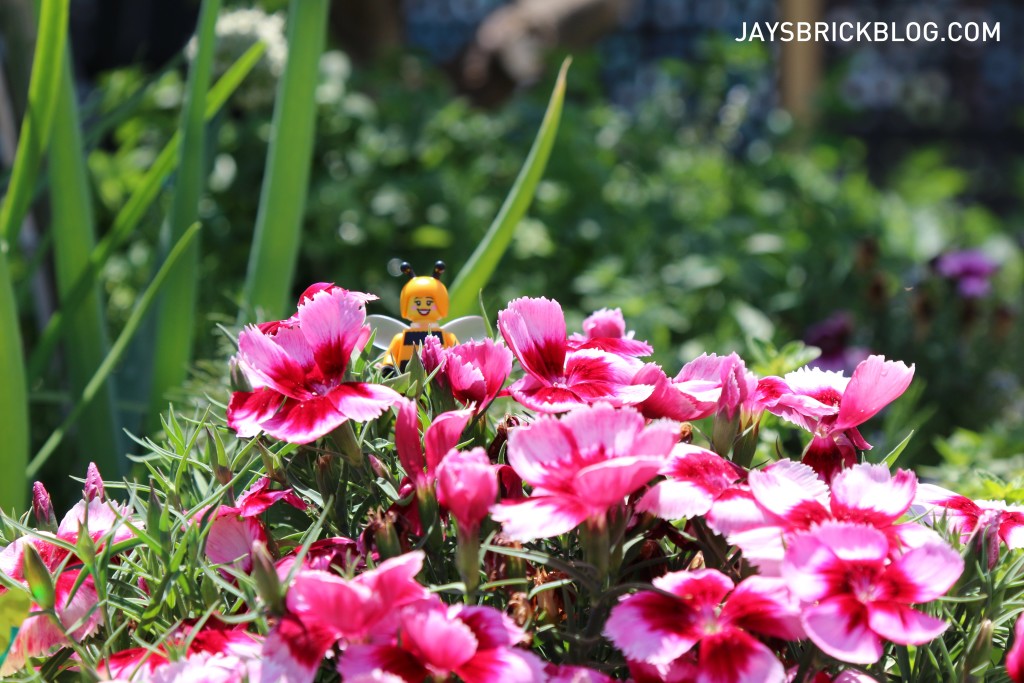 I personally love shooting LEGO photographs outdoors in areas with plenty of natural light and plants as I find that they make really great settings for minifigures. 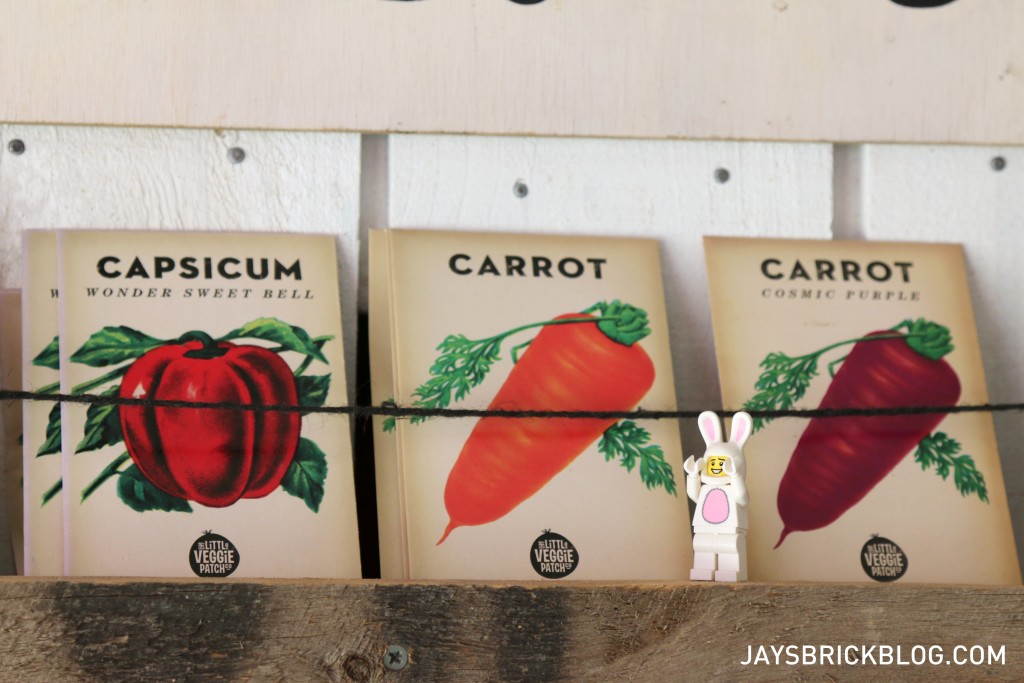 Was quite happy with some of the shots I took at the Pop Up Patch Cafe. Here’s Mr Bunny flipping out over carrot seeds that were on sale. 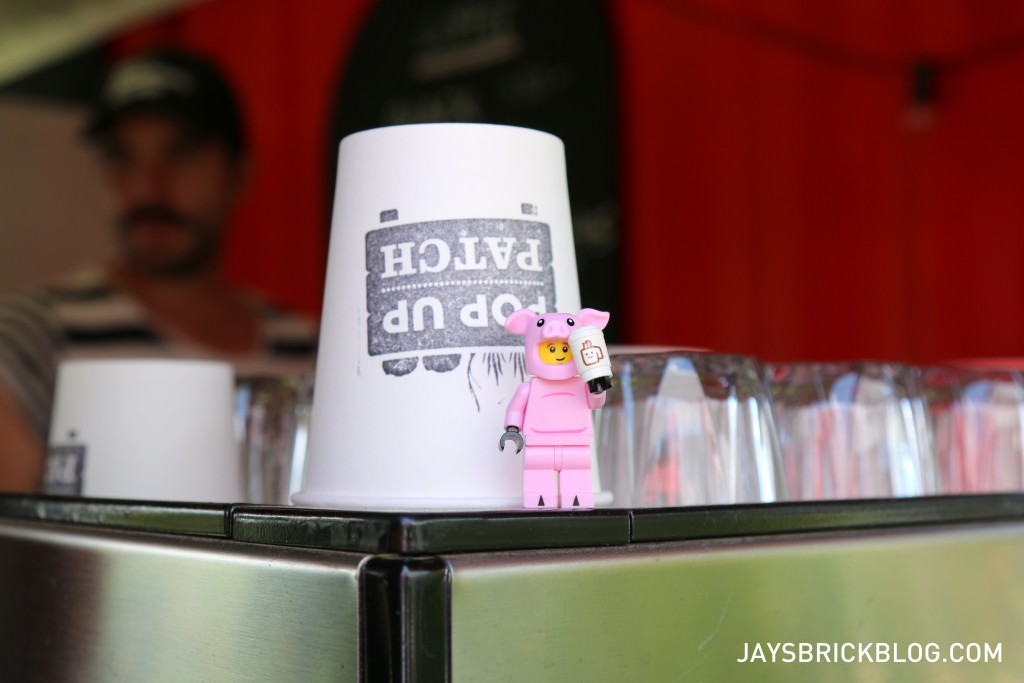 And here’s Mr Piggy getting his caffeine fix at the cafe. 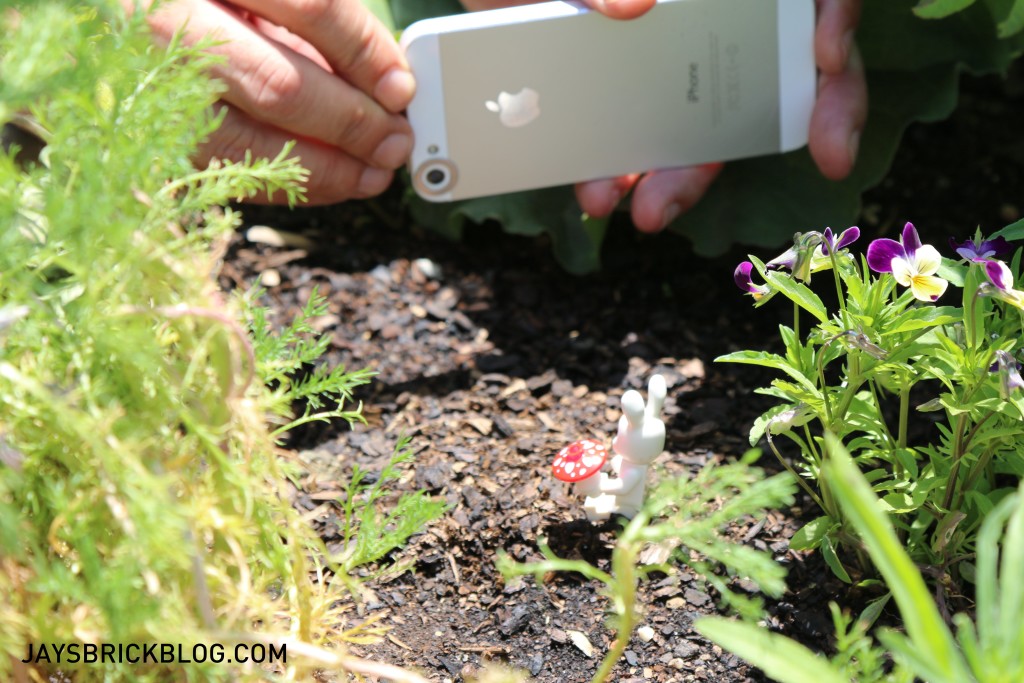 We snapped this photo of @Brett_Wilson taking a photo of his Bunny Suit Guy. Here was the end result, from his Instagram page. 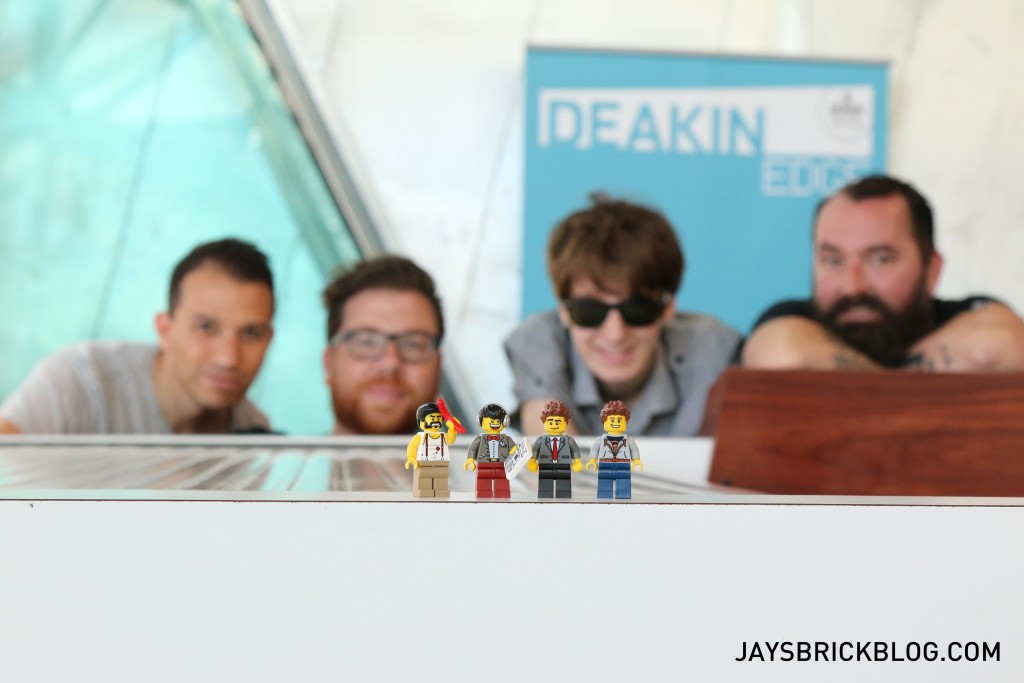 The most enjoyable part of the Brickstameet was getting to meet the hosts in person: @cheepjokes, @TheShortNews, @LLWorld and @Brett_Wilson who are well-known LEGO Instagrammers. I’ve been following them for a while and it was great being able to put a face to the name (or Instagram handle) and talk about LEGO.

I managed to interview and speak with the organisers about putting together the Brickstameet, working with Fed Square and their Instagram exploits.

What was it like working with LEGO and Fed Square to put together all these LEGO Christmas activities and the Brickstameet?

@CheepJokes: It was really fun, they contacted us a month and a half ago and I recommended some other Melbourne guys to get involved with the planning. We sent them a list of 15 different ideas and they narrowed down to just a handful and we had about 2 weeks to put everything together. We had a group messaging thing happening and it’s still going as we speak!

Working with the guys was easy – we delegated jobs to each other and merged all our ideas to come up with whatever we could. The best part of it all was getting everyone from around the world to contribute to our LEGO Instagram video [that’s being screened in Fed Square] by sending in their LEGO Christmas photos. 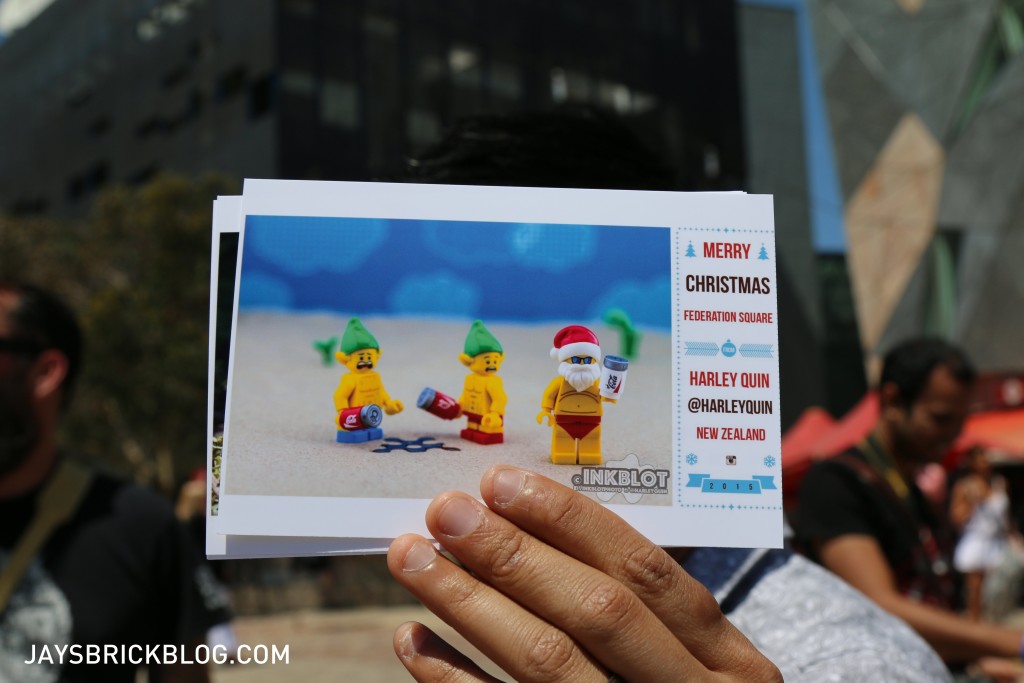 @Brett_Wilson: We were contacted by Fed Square individually to be asked if we wanted to be involved. I can only speak for myself but I jumped at the opportunity and then only found out who else was involved.

We started chatting with one another and came up with plenty of ideas which were put forward to Fed Square. Unfortunately due to time restrictions only some of them ended up happening – mainly the stuff we put together ourselves and photos from around the country/world.

What didn’t make the cut?

@TheShortNews: There were a few things that we could only do if we had more time. If we had gotten another month or even a couple of weeks, we probably could’ve scaled up the operations but it’s been pretty amazing that we were able to put together all of this with the time that we had.

@Brett_Wilson: Some of the things that didn’t make it due to time was a treasure hunt around Fed Square. We wanted to hide minifigs and LEGO objects around Fed Square and hand out prizes to people who located them. We also wanted to organise some build competitions as well. 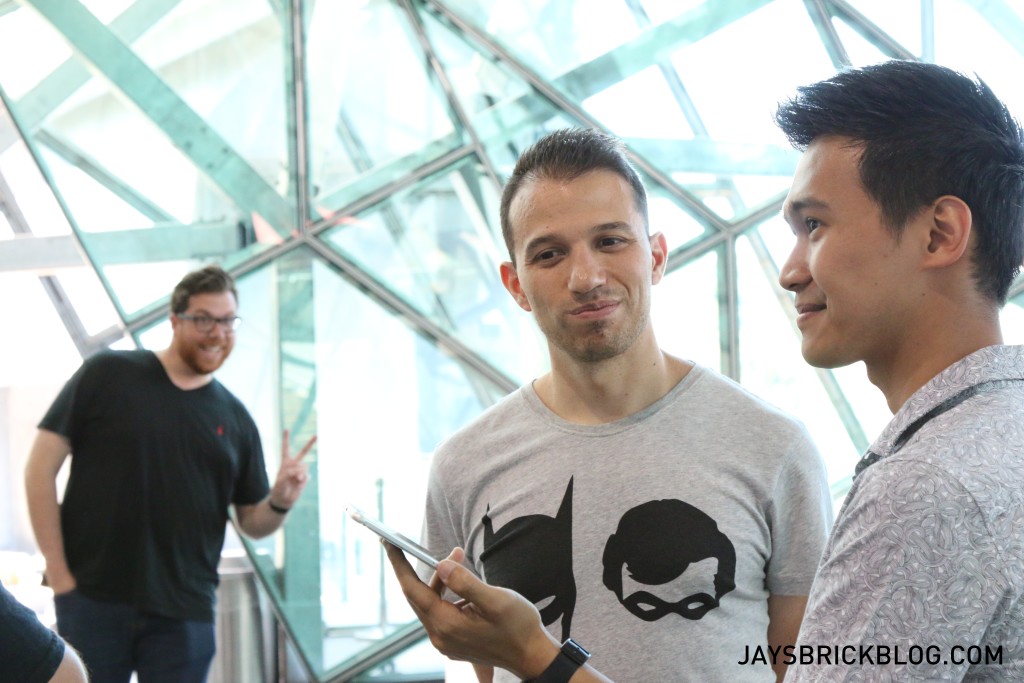 What was your fondest memory of this collaboration with Fed Square?

@LLWorld: Having a blonde chick yell at me in the middle of Fed Square about spending all my money on LEGO. That was my fondest memory. I haven’t made a comic strip about it. I’m gonna jot a few things down and make fun of it eventually.

@CheepJokes: For me, this is probably one of my favourite spots in Melbourne – this corner with the Arts Centre, Hamer Hall, Fed Square and Flinders Street. Just having our work on display on the screen here is pretty huge.

Do you guys see this Brickstameet as a stepping stone to more meetups or on-ground events for the LEGO Instagram community?

@Brett_Wilson: Yeah, we only had a couple of weeks of notification to put this together and we’ve got a pretty decent turnout from around Melbourne. I think with more time and more promo, it could be even bigger and better. I’d love to definitely do more with these guys. If LEGO Australia want to jump on board that would be even better!

Time to plug your Instagram accounts! Tell us more about what you guys do on Instagram and what your accounts are all about?

@CheepJokes: It’s really just stop motion and making little skits. Where you’ve got a joke like “my best super hero” or whether its a funny conversation that @LLWorld and I had – it’s a platform to be able to bring those funny conversations or ideas to life with LEGO.

@llworld: Mine’s basically just comics. It started off as mainly just Deadpool and Spiderman – #TeamRed. It’s just the misadventures that they have as well as some other characters. I also use conversations with @cheepjokes or @Brett_wilson or even with @comicdetours. Pretty much just making my own little comics.

@brett_wilson: It’s all sorts of junk. Lots of silly jokes, lots of outdoor photography, a lot of lightroom stuff. Lots of silliness.

A West Virginia assistant prosecuting attorney was suspended for pulling out his gun & threatening to shoot fake spiders around the office. It’s reported that Chris White told his colleagues he was “deathly afraid of spiders”, but they put them up anyway as part of #Halloween decorations. While the gun had no clip in it, the Logan County prosecutor said no one could have known that. Between 3.5 to 6.1% are said to have aracnophobia ? #lego #art #toys #photooftheday #me #instagood #theshortnews #follow #huffpostgram @lego @instagram @huffingtonpost #halloween2015 @9gag @brobible

@TheShortNews: I use toys to make the news fun. I realise there’s a lot of sad stories around the world. I try to pick out a few things everyday that will make people smile, laugh or teach them something new or all 3 in one hit. I try to take the lighter side of life – use a bit of toys and everyone has a bit of fun!

So yeah, that was my experience at the Brickstameet! Had a really awesome time meeting people and making a few new friends. If you’d like to see more photos from the event, look up the #Brickstameet hashtag on Instagram!

Are you on Instagram? Don’t forget to follow me @jayong28 for a peek into some of my LEGO photography as well as what I get up to outside of LEGO and this blog!

Had a lot of fun customising my @lego x @adidasori

I sometimes take my massive @LEGO collection for g

Happy #DragonBoatFestival to everyone observing an

Your eyes don't deceive you - this is an actual bu

All that glitters is gold ✨ #LEGO