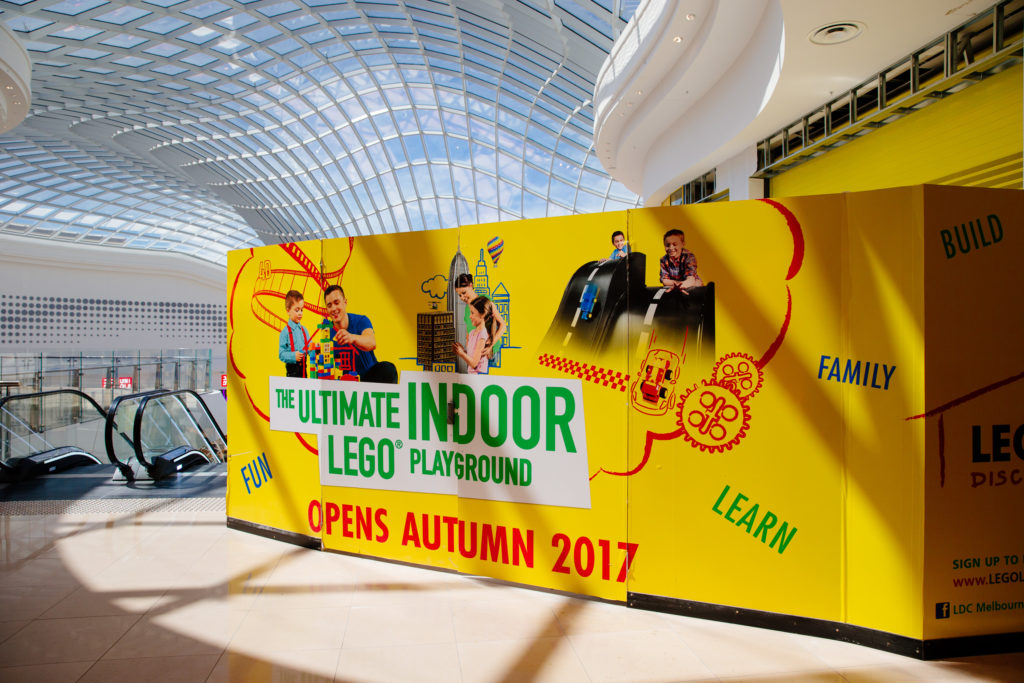 About two weeks ago, me and a bunch of other Melbourne-based LEGO bloggers and Instagrammers (shout out to @theshortnews, @cheepjokes, @biginlego, @ramblingbrick) were given an exclusive, behind the scenes tour of the Legoland Discovery Centre (LDC) at Chadstone shopping centre.

Dubbed the “Hard Hat Tour” – we were all given hard hats and high vis vests, and had to do our best tradie impressions for the tour. The Melbourne Legoland Discovery Centre is slated to open on 18 April 2017, and construction is still well underway but it was nice to be able to get a glimpse of the work in progress as well as get a sense of what the Centre will ultimately look like.

It was also a great opportunity to chat to the LDC’s Marketing Manager, who was the perfect tour guide and it was great to get an idea of what was being planned for the opening and beyond.

Here’s some information that I’ve been able to confirm.

The annual price grants you unlimited entry to the Legoland Discovery Centre, 10% off the LEGO shop as well as an invite to an exclusive passholder preview of the LDC, ahead of the public opening.

Both adults and children will require tickets to enter the park. Oh and adults cannot enter the Legoland Discovery Centre without a child, and vice versa.

Fret not if you’re a childless adult LEGO fan – there will be AFOL Nights planned for the Legoland Discovery Centre Melbourne, which will run every third Thursday of the month from 7 – 9pm.

The Legoland Discovery Centre’s Shop is undoubtedly one of the most exciting things for adult LEGO fans. And yes, you can enter the shop without a ticket.

There will be a wide range of LEGO sets and accessories stocked at the LDC Melbourne Shop. It’s not a LEGO Certified Store/Brand Retail Store, but it will still have a distinct, very unique shopping experience that’s quite close to official LEGO stores.

It won’t have a range as large as the Dreamworld LEGO Certified Store because its slightly smaller, but it will still have a great range, with exclusives that you won’t be able to find in your regular toy store.

There will be a Build a Minifigure Station, which will be a lot of fun for kids and LEGO fans in general.

The most exciting thing about the store is the Pick a Brick Wall, which will have 124 slots. That’s actually quite a sizable wall – for comparison, Dreamworld’s Pick a Brick Wall has 144 slots.

Update 2: Turns out that Merlin had a change of heart – Pick a Brick at the Legoland Discovery Centre Chadstone will be priced by cup. $29.99 for a large cup and $19.99 for a small cup. Check out this post on the LEGO Shopping experience!

If they go by other Legoland Discovery Centres around the world, they’ll be sold by weight, which is the slightly pricier option.

Details on this were scant BUT we can look forward to special events at the Legoland Discovery Centre. Confirmed events for this year are tie-ins with the LEGO Ninjago Movie and Star Wars Episode VIII later in the year.

I really like the idea of these events and I’m looking forward to finding out more when details get released. 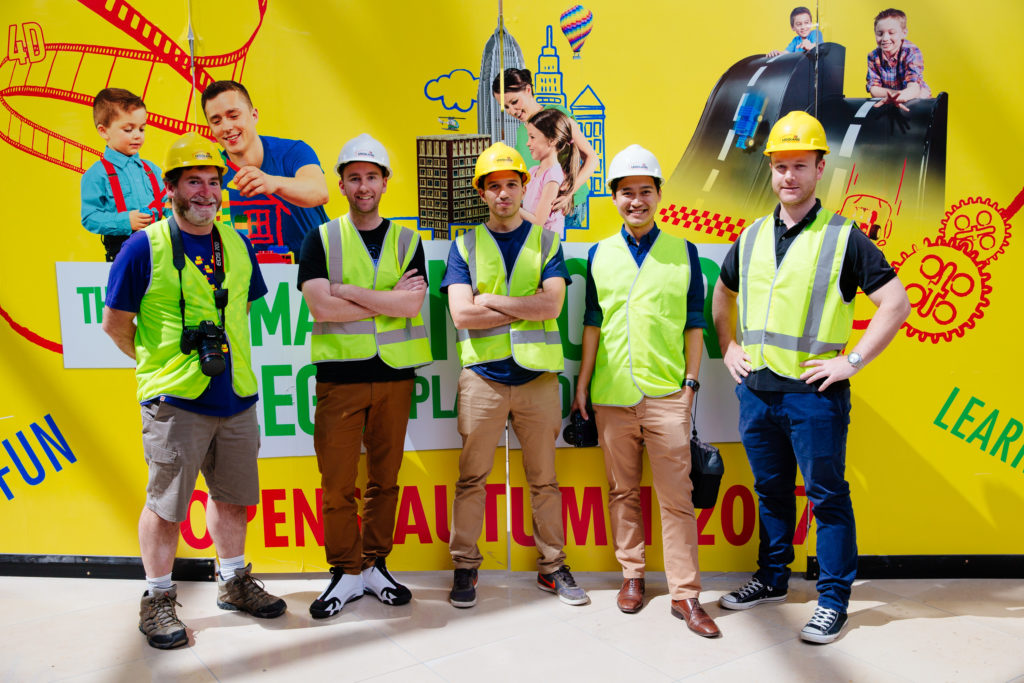 I had a really good time on the Hard Hat Tour. Even though the park was still quite far off from being complete, it was great to be able to walk through the route that a typical visitor would take when visiting the Melbourne Legoland Discovery Centre.

I’d say the LDC was about… 40% complete? There was still a lot of construction going on, and the rides were only just installed so it was pretty bare bones but it got me really optimistic abut the experience.

Huge disclaimer, because I know that a certain group of over-zealous LEGO fans will make a huge deal out of this.

The Legoland Discovery Centre is designed primarily for kids. Kids that are 3 – 10 years old. Not adults. Adults can enjoy the LDC, but they are not the target audience.

Now that that’s out of the way… 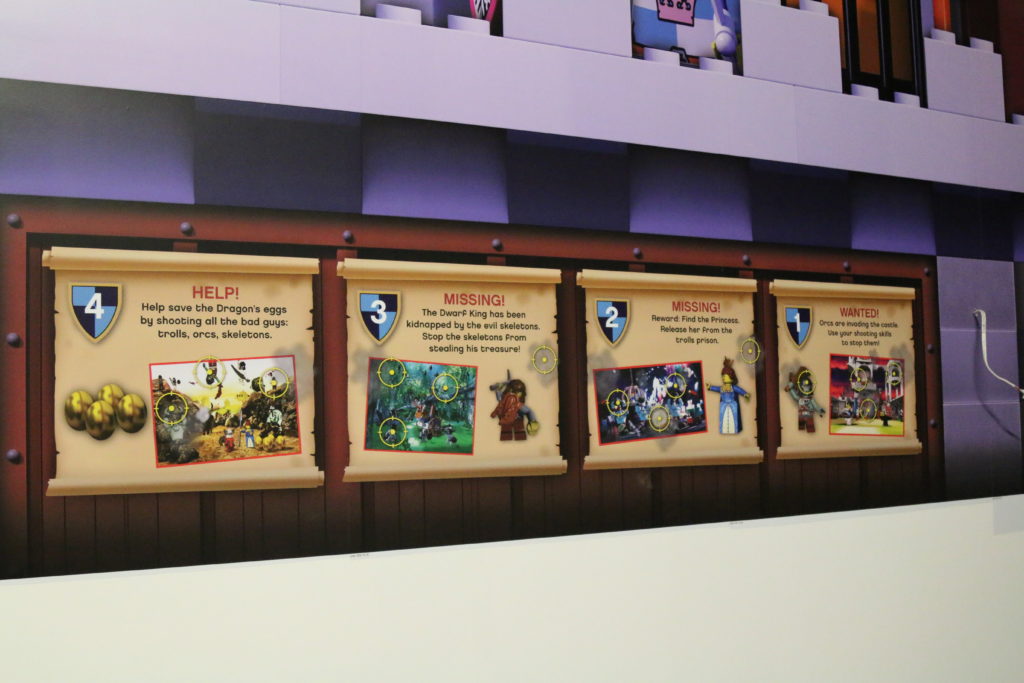 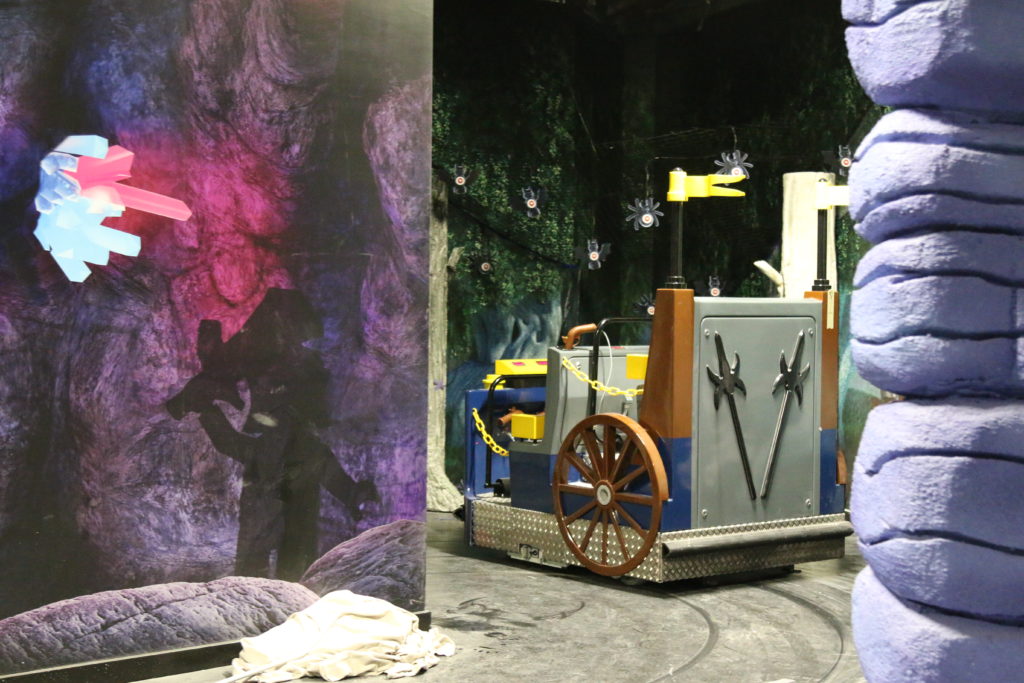 There are two main rides in the LDC, the first being Kingdom Quest. It’s an on-rails ride, you hop into a Castle/Kingdoms-themed medieval car that travels around a fixed circuit. 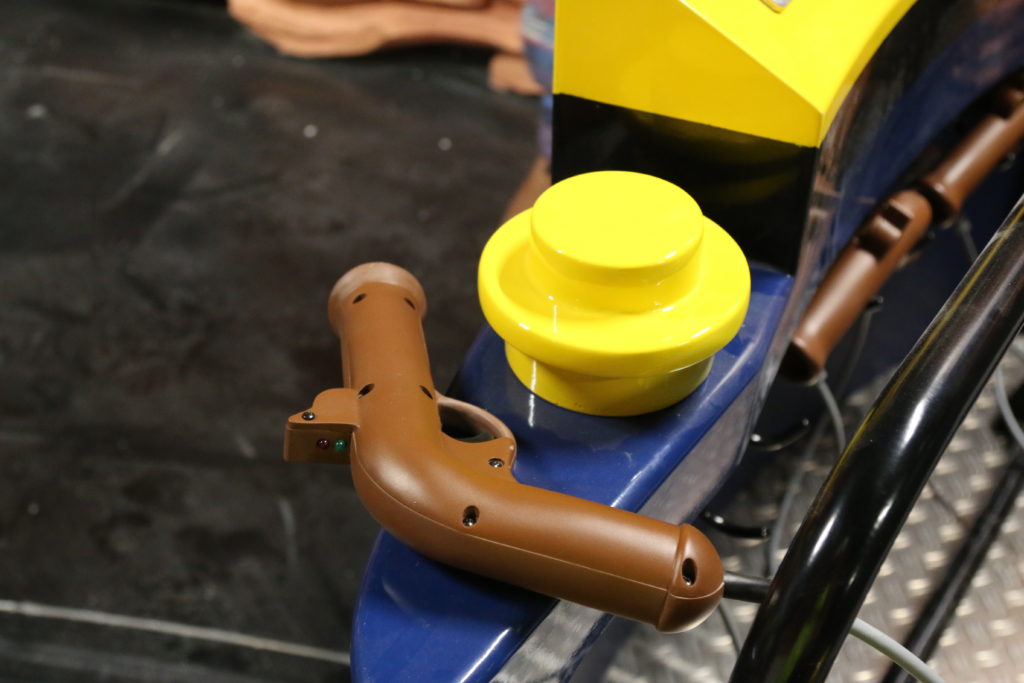 Each person in the cart can wield one of these awesome oversized LEGO pistols, which shoot out laser beams that you can use to shoot targets across the track. It’s a bit competitive and you rack up points based on what you hit. 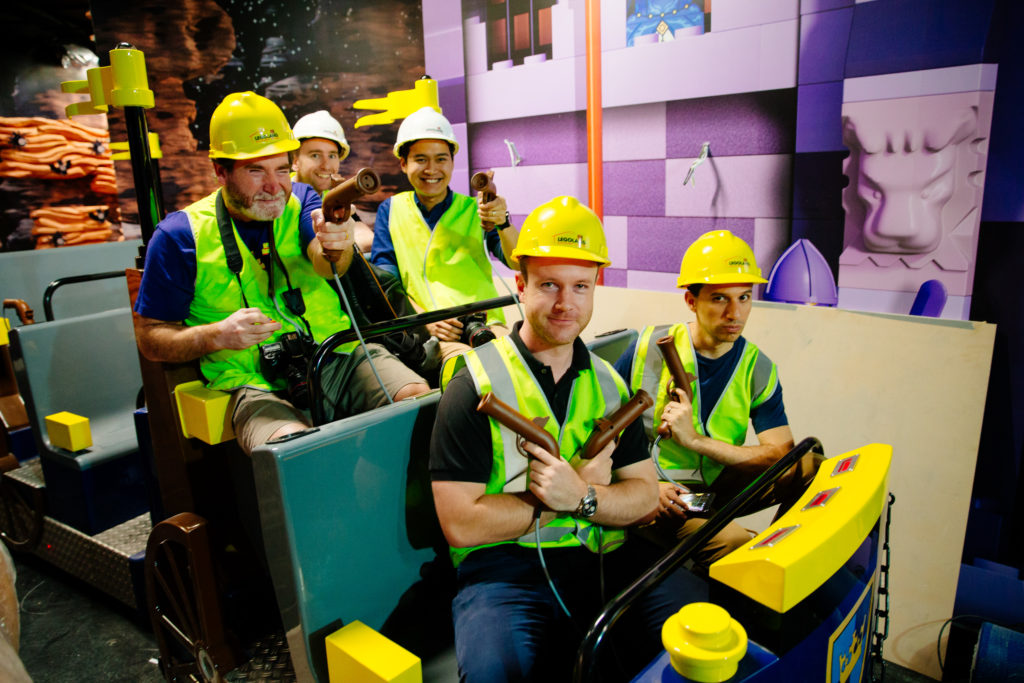 If you’ve been to a Legoland, this ride should be quite familiar. If it’s anything like the Pharoah’s Quest ride at Legoland Malaysia, this will be plenty of fun, especially if you make it a bit of a family competition. 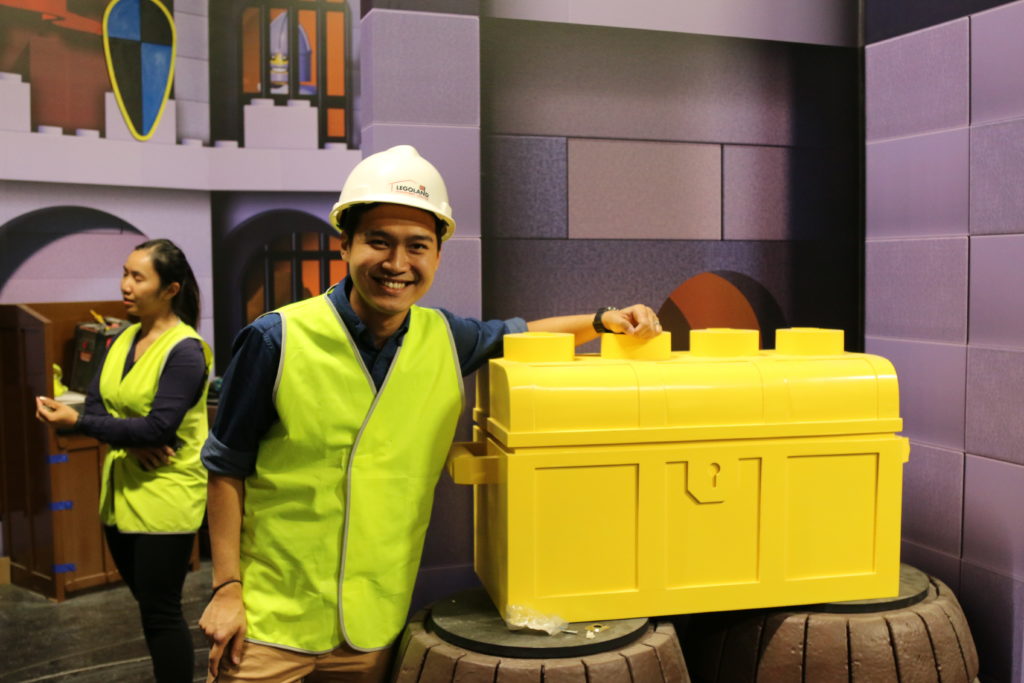 One of my favourite things about the ride was these life-sized LEGO treasure chests! Was so happy that I could pose with one, as I probably won’t ever get this opportunity ever again when the ride is fully set-up. 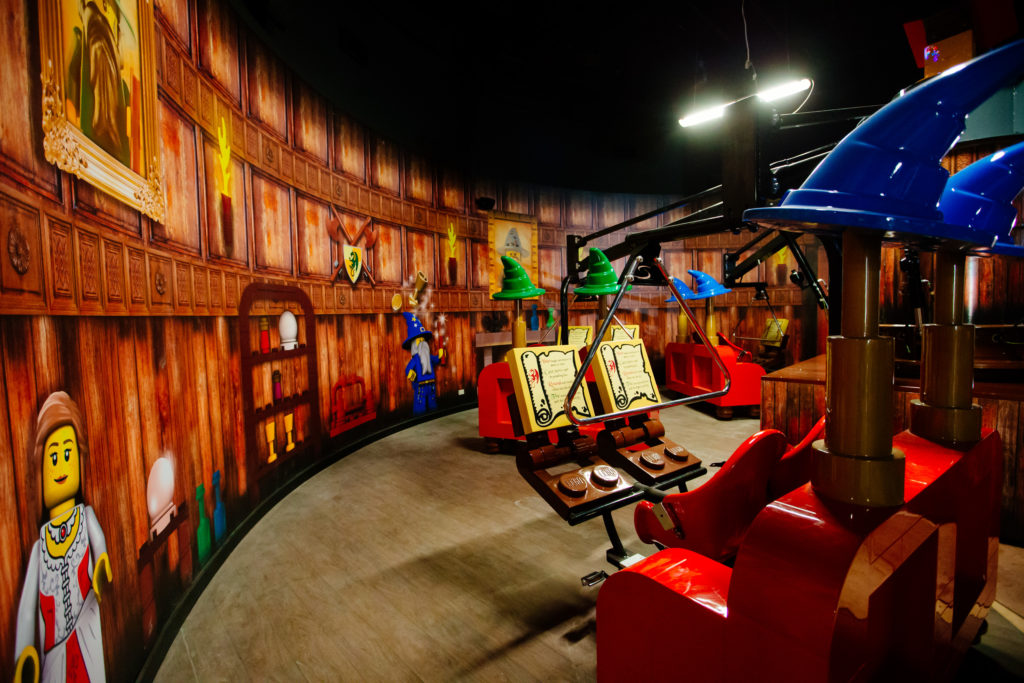 The next major ride was Merlin’s Apprentice, a simple carousel-like ride where you can pedal to elevate the seat into the air. No guns or shooting here, but I really liked the super-sized LEGO elements like the tiles, wizard hats and also the brick-built seats. 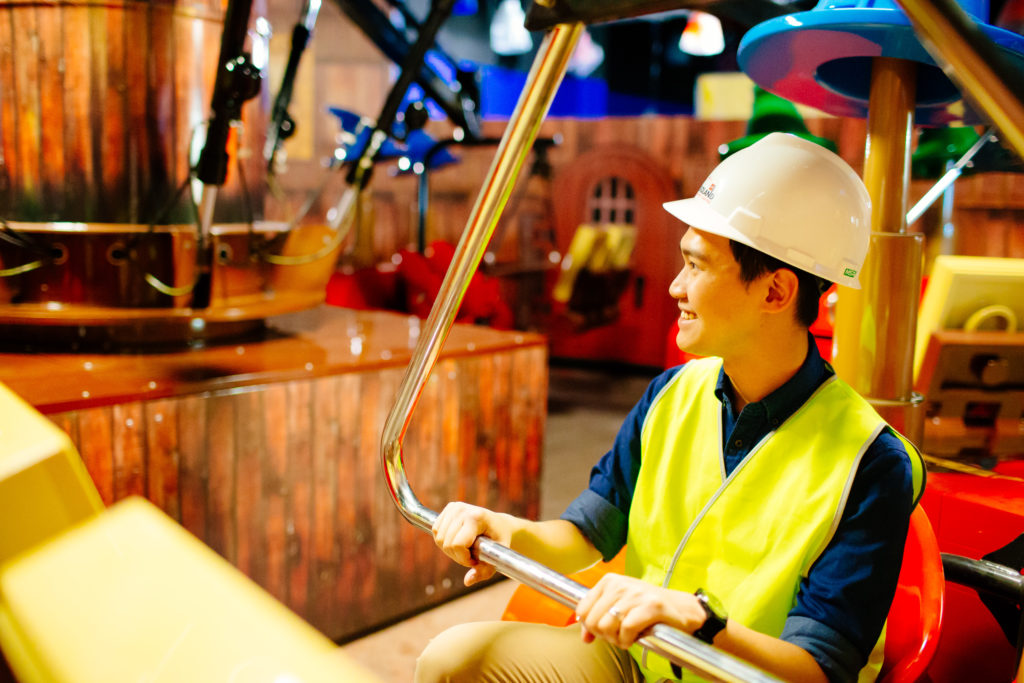 Don’t know why I was so happy in this photo, but I did feel like a kid again, which is a very special feeling. 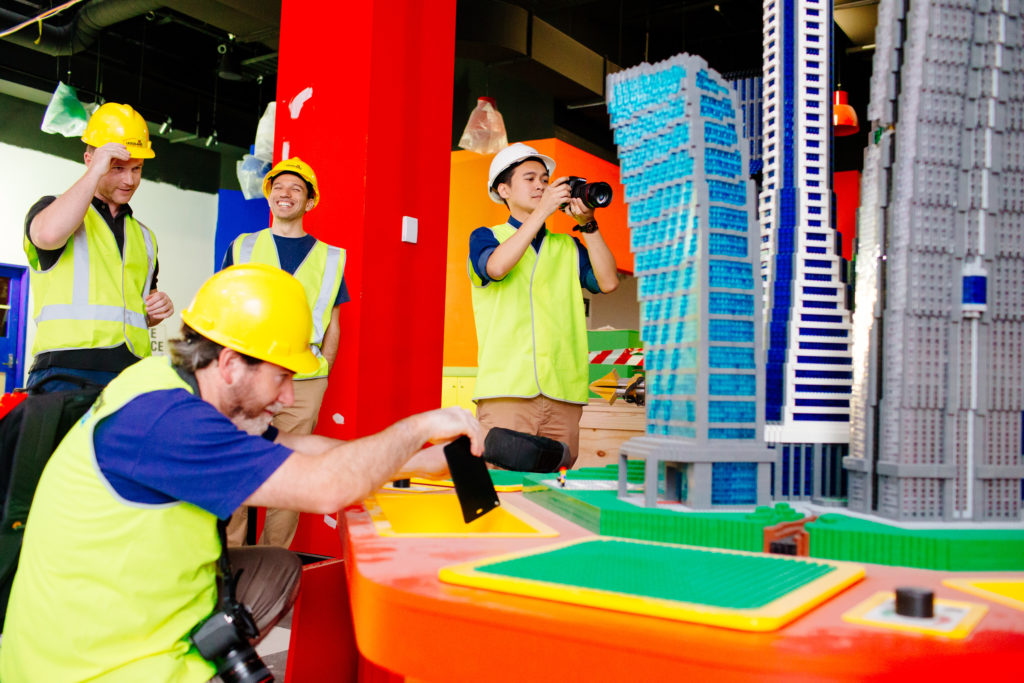 In the middle of the Legoland Discovery Centre, there’s a massive “hub” with tons of different activities for kids. This photo above is also a familiar Legoland fixture – the Earthquake Towers, where you try and build a tower out of Duplo.

There’s a button you can hit which unleashes an earthquake, putting your construction skills to the test. 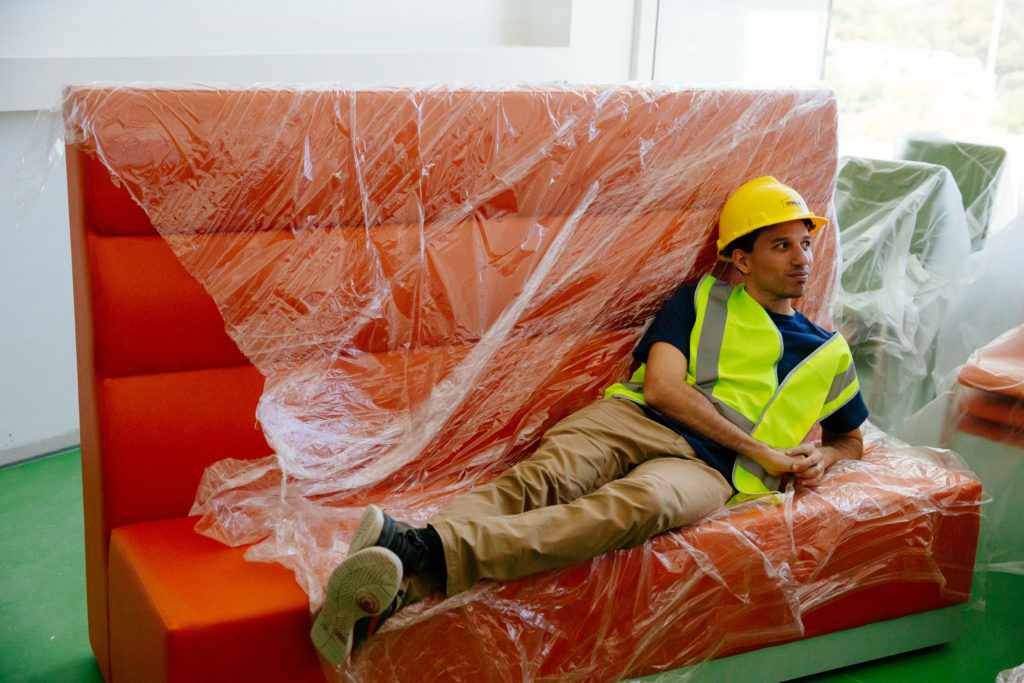 Other attractions at the hub include: 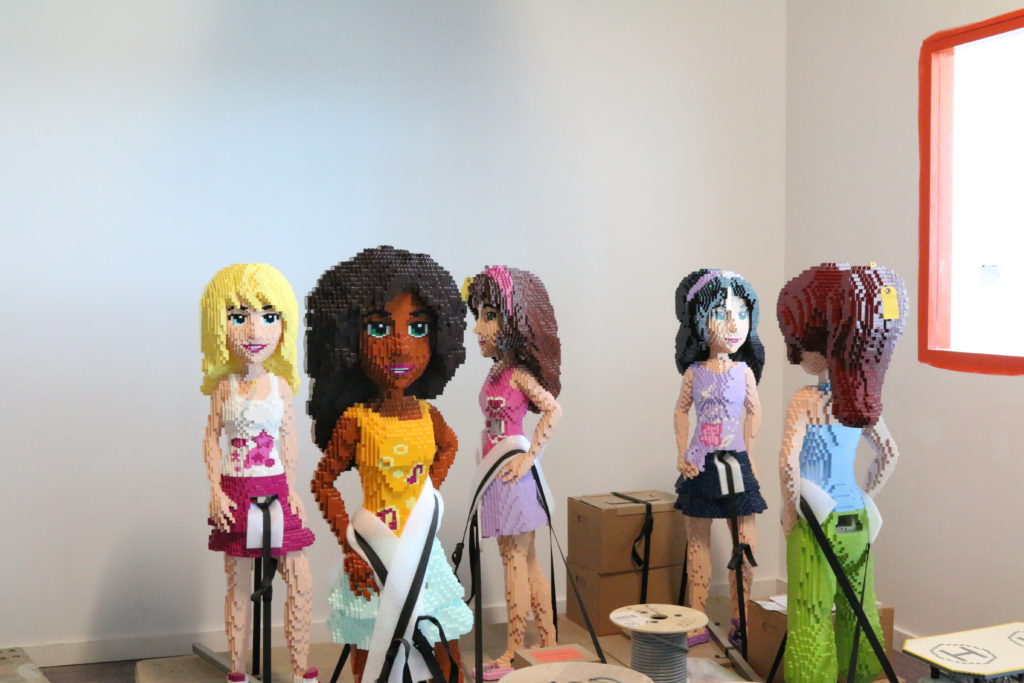 There’s also a Friends section where you can pose with your favourite brickbuilt Friends characters! 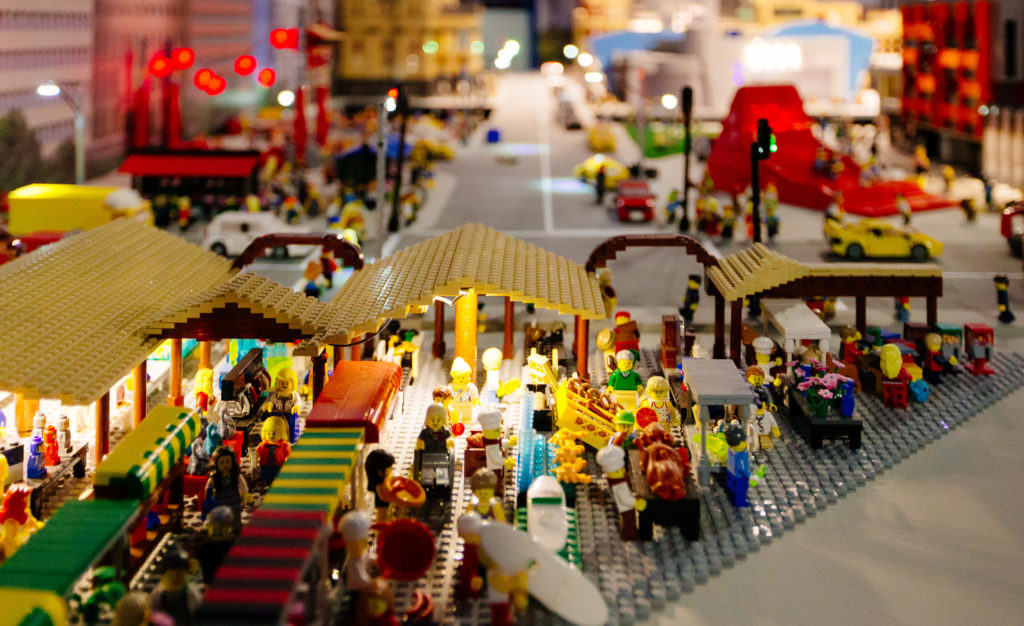 Unfortunately, we weren’t allowed to take photos of Miniland as it wasn’t complete and because they wanted to save Miniland for the big unveil when the LDC opens.

Which I could totally understand because I was absolutely blown away by it. It is by far, the best thing about the Melbourne Legoland Discovery Centre and is worth the price of admission alone.

When we were there, Miniland was about… 70% complete?

One thing to note that it’s technically not a Miniland, which is its own scale and has Miniland-scale people which have become quite iconic. Miniland at the LDC is built at minifgure-scale, which is a really smart move as it’s a lot more interesting, dynamic and fun compared to Miniland people. 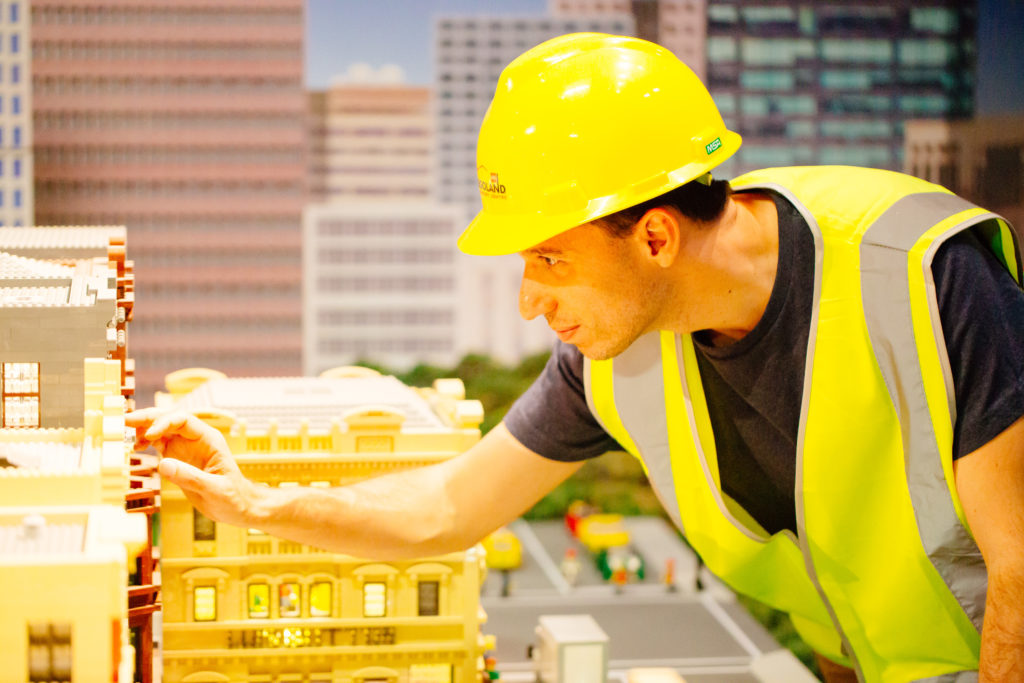 Without spoiling too much – nearly every Melbourne landmark that you can think of is there and is lovingly constructed very accurately out of LEGO.

Miniland is also crawling with minifigures – I believe there’s over 2000 minifigures, which gives it a very busy, bustling vibe that reflects life in Melbourne. 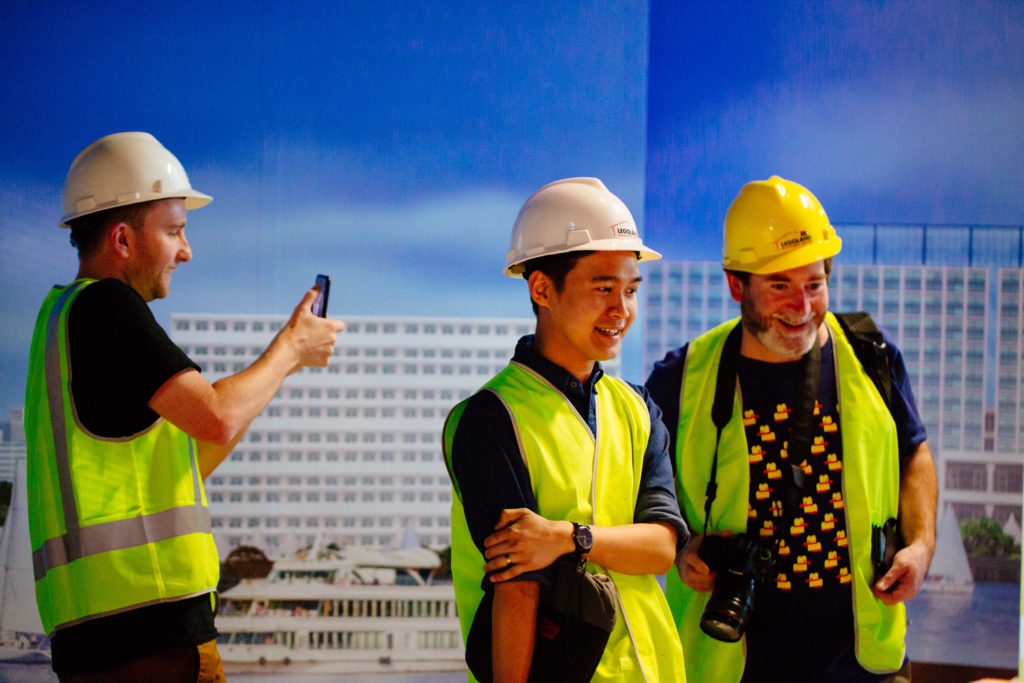 You’ve never seen Melbourne City constructed so well out of LEGO. It was a lot of fun taking our time there, checking out the minifigures and small Easter Eggs strewn about Miniland, and admiring the architectural accuracy achieved by LEGO bricks.

We also got a chance to chat with some of the Model Builders from the UK who were there building the rest of Miniland. These guys travel around the world to build Minilands at LDCs and their work is exceptional.

This is one of those cases where you’ll have to see it in person to fully experience all that it has to offer. I can’t wait to be back and to check out the completed Miniland.

So yeah, that’s my first impression of the Legoland Discovery Centre from the Hard Hat Tour. I’m mostly quite optimistic about the park, and I can see it being a hit with children and families.

The novelty of being surrounded by all things LEGO does make you feel like a kid again, and there’s just enough detail there so that adults won’t feel completely bored.

For adult LEGO fans, the shop and Miniland will be the biggest draws but outside of that, I doubt there will be a lot to be excited about – especially since there are plenty of adult fans without kids of their own.

The AFOL Nights will remedy that to a certain extent, but this is after all an amusement park designed for kids – so do adjust your expectations to avoid disappointment.

The Melbourne Legoland Discovery Centre opens on 18 April. I’ll hopefully be able to bring you more updates and a better look at the completed park closer to the date, but this is all I’ve got for now!

Special thanks to the Legoland Discovery Centre Melbourne team for putting together the Hard Hat Tour and for being such excellent hosts.

Now that you’ve got a bit of a sneak peek of the LDC, let me know what you think in the comments! I’d love to hear what you’re most looking forward to, and if you have kids, how they feel about Australia’s very first Legoland Discovery Centre!

If you have any questions about the park, please let me know!

« The LEGO Ninjago Movie Trailer is here and it is dope!
LEGO 70917 The Ultimate Batmobile blows every other Batmobile out of the water »