It was only a week ago when I last set foot in the Emporium Melbourne, the hottest new shopping mall nestled between Little Bourke and Lonsdale Street. It’s a pretty sweet shopping complex, with cool outlets such as Australia’s flagship Uniqlo shop, Brooks Brothers and other fancy brands. I remember remarking to my wife that “the only thing missing is a toy store” and was quite disappointed that there was nowhere I could duck into to gawk at LEGO.

Lo and behold, I saw this little bit of news pop up on my Twitter feed yesterday and my interest was piqued. 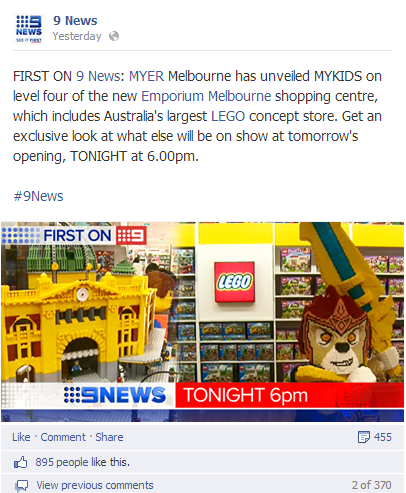 Australia’s largest LEGO concept store sounded like a tantalizing premise and I immediately made plans to check it out today during my lunch break. Turns out, it wasn’t that big of a deal, so if you’re planning on making the effort to trek into the CBD just to check it out, get to the end of this post before making a decision to visit. 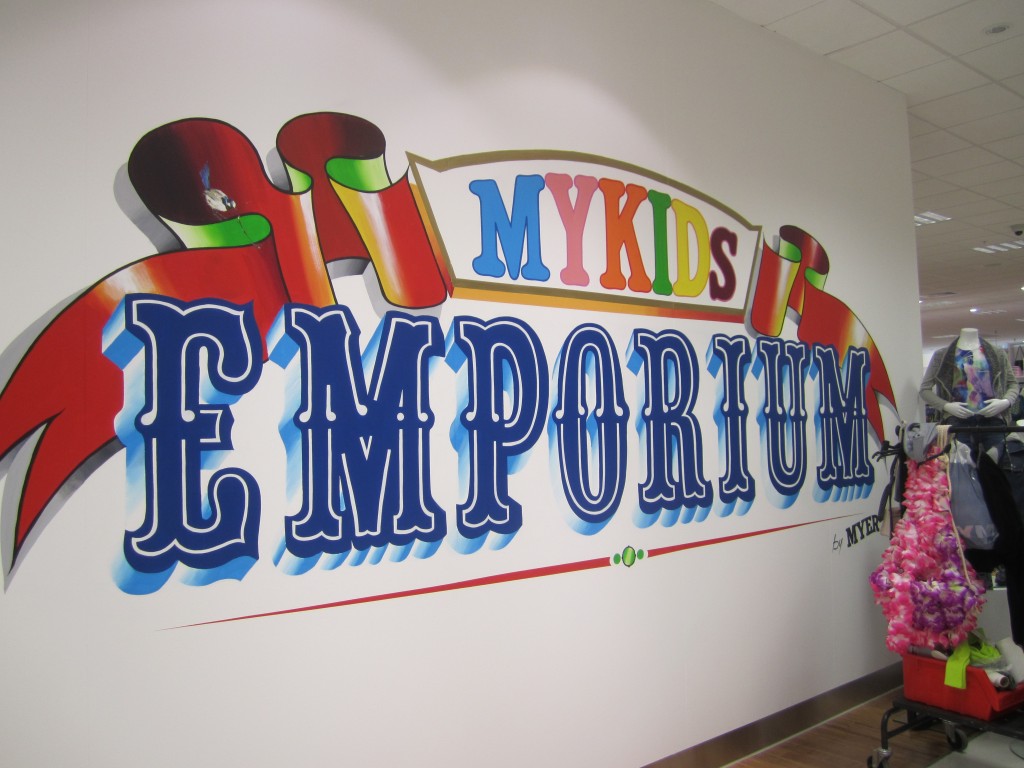 Here’s the rundown. MyKids is essentially a giant Myer kids section on Level 4 of Emporium Melbourne. It’s a whole floor filled with a massive toy section (which is kinda cool), kids apparel and other kiddy related stuff. The LEGO “Concept Store” (note my inverted commas) is basically just a fancier, slightly larger LEGO section. I was quite disappointed when I got there because here I was thinking we were going to get something really cool, akin to the official LEGO stores in the USA and Europe. Instead, it’s just a bigger Myer LEGO section.

Now, I have to concede that 9 News might have jumped the gun and called it a “Concept Store”. I work in PR, these things happen all the time but still, you’d think they’d correct it if it was an error.

Check out some of the pictures I took of the “Concept Store”. 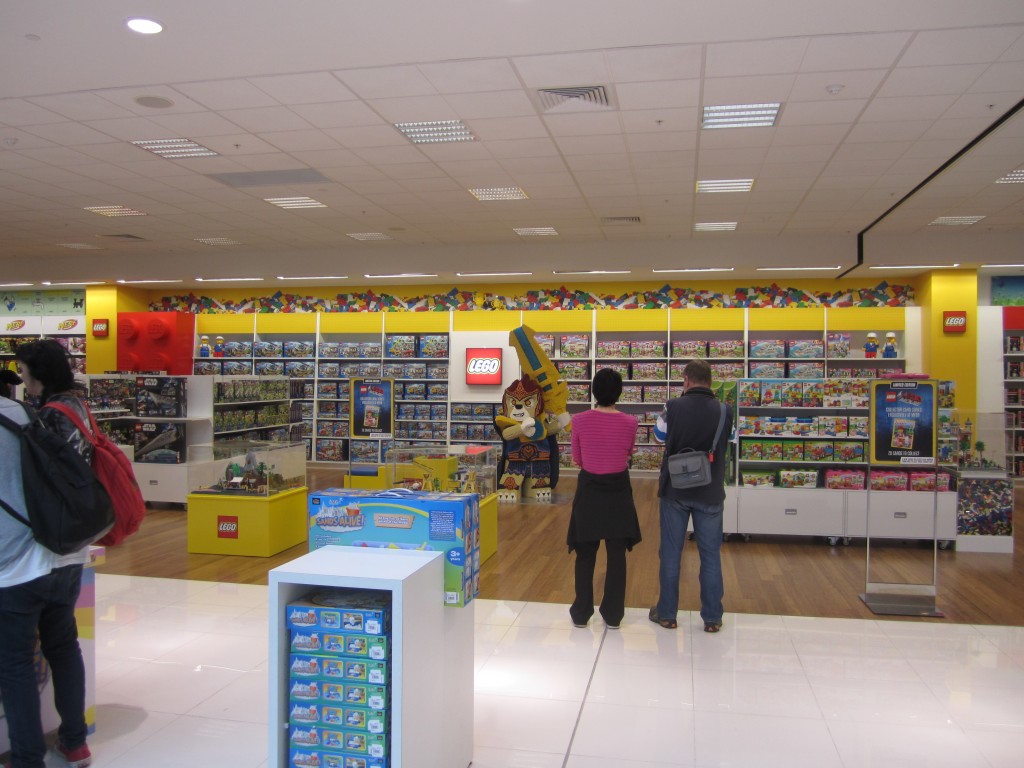 Here’s a zoomed out look at the “Concept Store”. The aesthetics are nice and there’s tons of space between the shelves which allow you to browse easily and not risk bumping elbows (or knocking over hyperactive kids) with other shoppers which is quite nice. 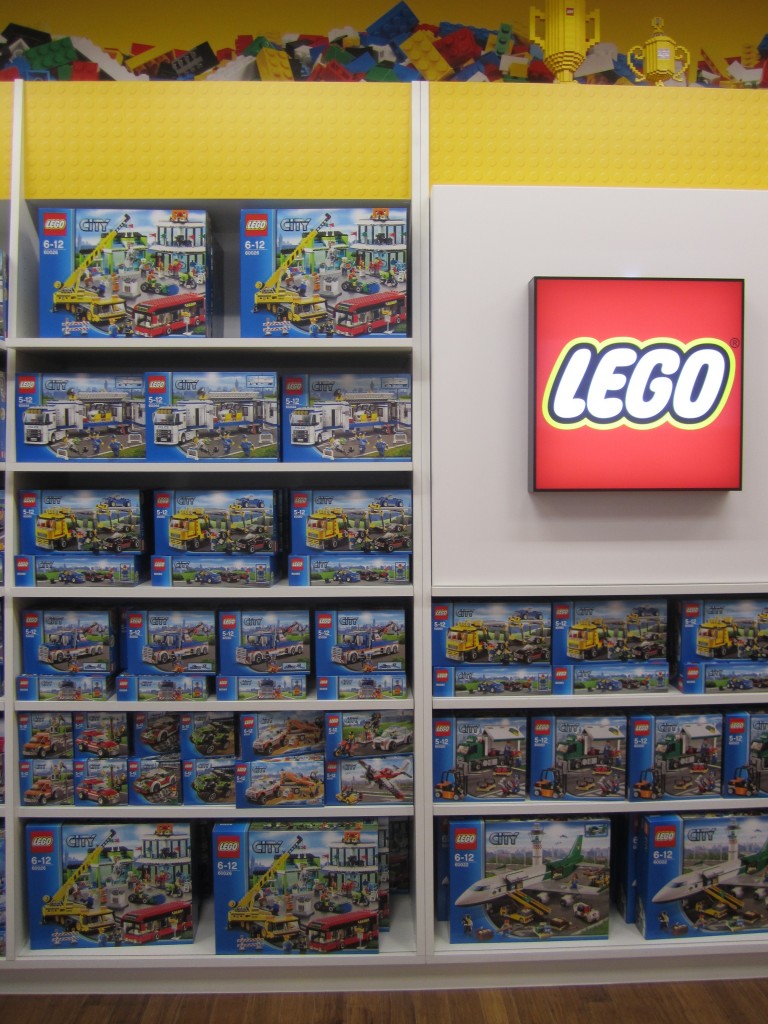 They also have a massive wall at the back stocked with LEGO City and Friends sets. Of note is the Town Centre, which was previously exclusive to Big W. 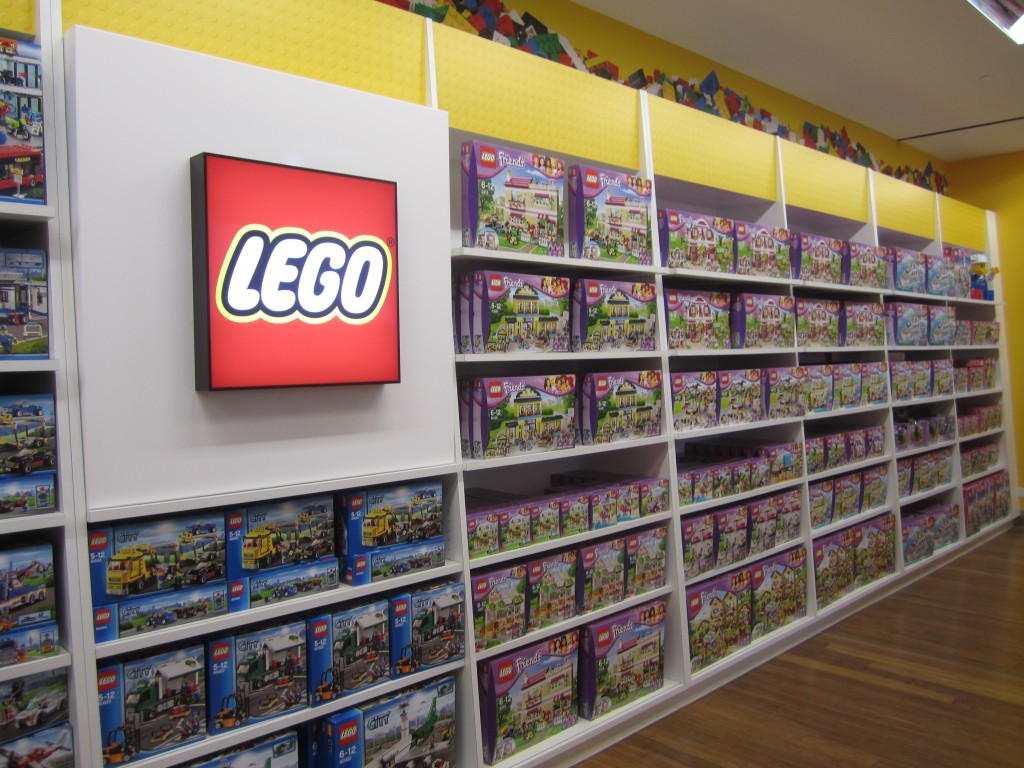 Nice to see LEGO Friends getting lots of love. 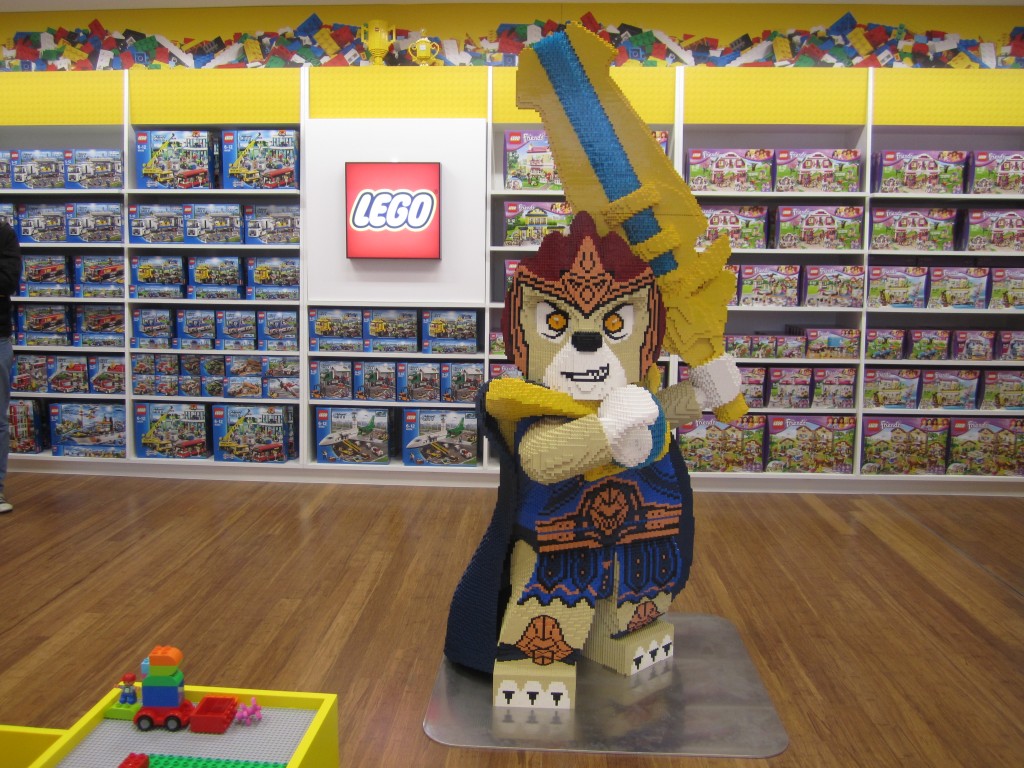 One of the cooler features of the LEGO section at MyKids is the presence of massive brick-built minifigures like  Laval [thanks Brad for pointing this out!] from the Legends of Chima. These creations were built by Australia’s very own LEGO Certified Professional Ryan McNaught. 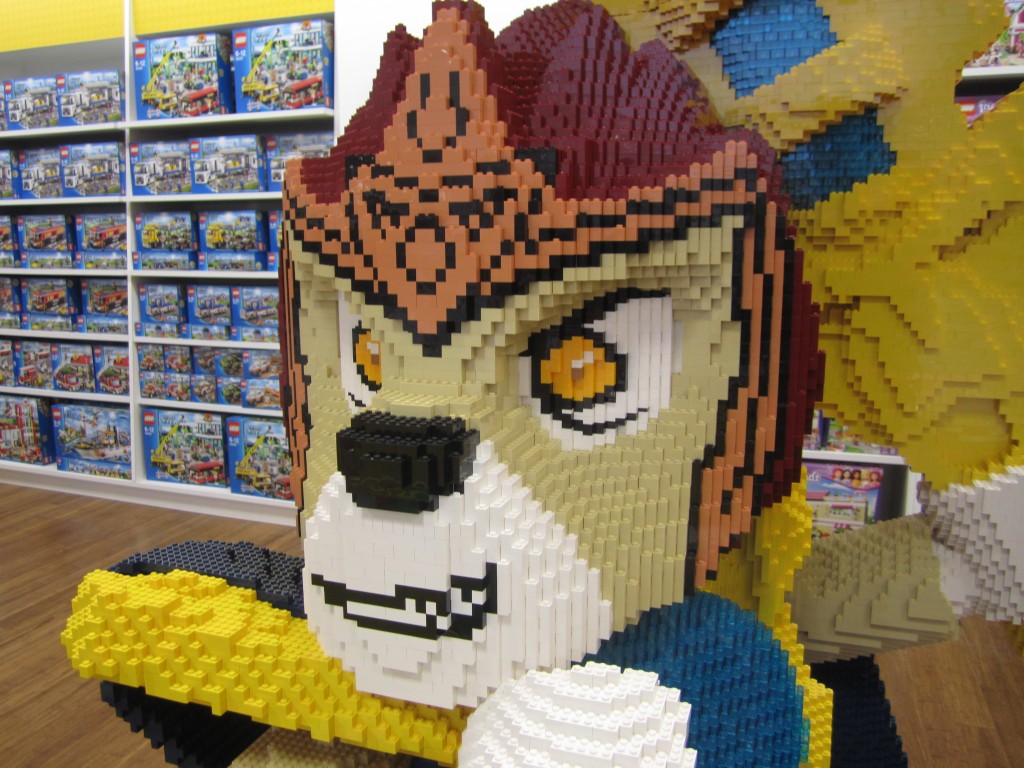 The level of detail when you view  Laval upclose is absolutely spectacular and one of the highlights of the store. 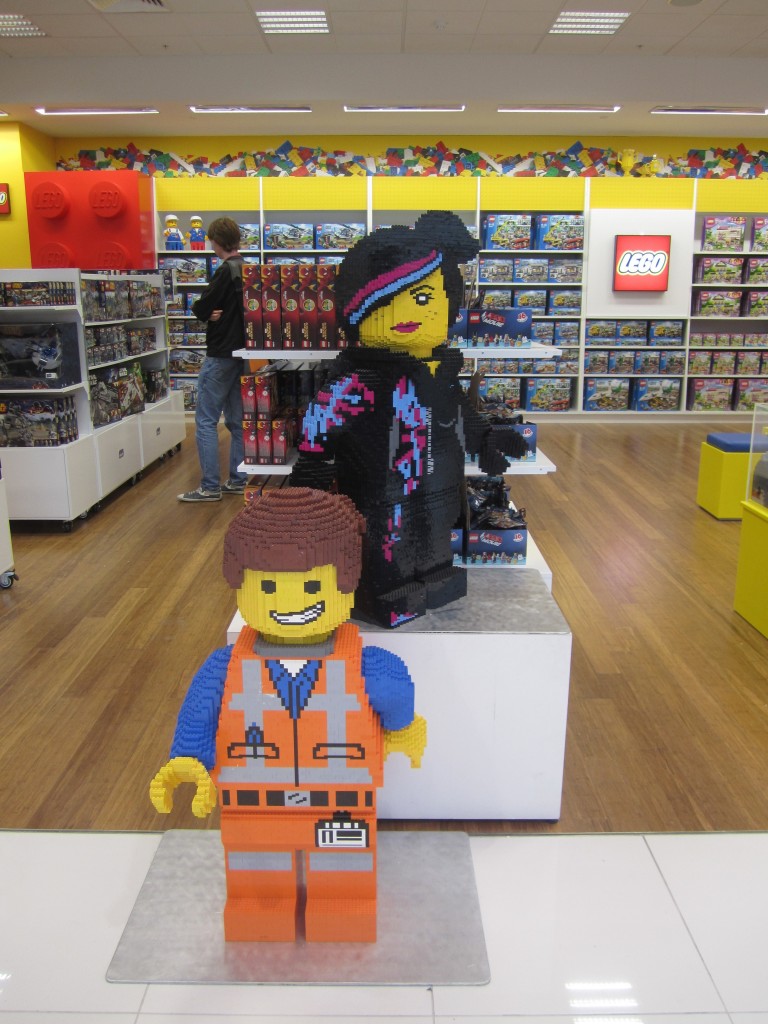 Poster child for the recent LEGO renaissance, Emmet and his female counterpart Wyldstyle are also present and accounted for. These should be popular for selfies.

In addition to these mega-sized minifigures (which should really be called megafigures), we’re also treated to several dioramas featuring Melbourne landmarks (such as Flinders Street Station above) and other scenes, all built by Ryan.

For those unfamiliar with Ryan’s work, his dioramas are packed with neat little details and features, such as this lonely guy drinking in a back-alley behind Luna Park.

These dioramas are fantastic and by far my favourite thing about the LEGO section at MyKids. 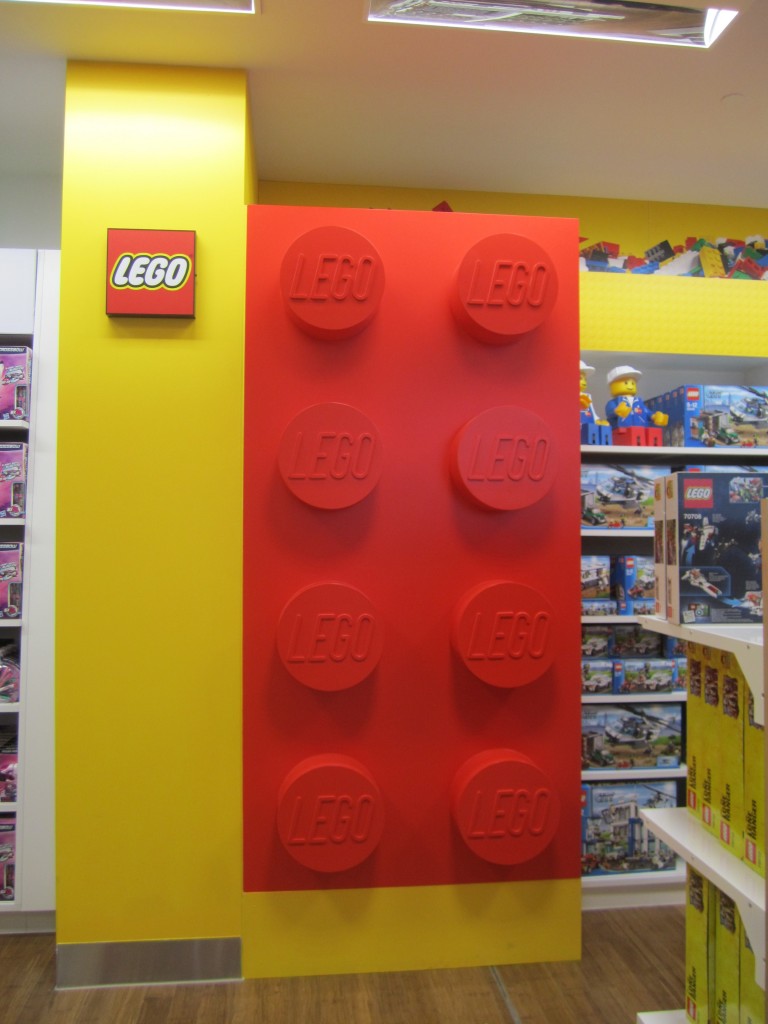 There’s also this massive red 2×4 brick at the edge of the LEGO shelves. It’ll be a pretty cool photo spot for LEGO fans.

So, other than these LEGO creations, there’s nothing really special about the LEGO “Concept Store” at MyKids. It’s definitely a more conducive shopping environment, but in reality, you can get most (if not all) of these sets in any other Myer or toy retailer. In terms of interesting sets, I only spied the Volkswagen T1 Campervan, Star Wars Super Star Destroyer, 2 Millennium Falcons and the Town Centre but that’s pretty much it.

I’m having a hard time figuring out what makes this store stand out from the rest and I sincerely hope that since it’s early days, there will be a lot more planned to make this a truly cutting edge LEGO shopping experience. Australia is really overdue for an official LEGO store and I was quite let down that this experience was nothing like the hyperbolic 9 News headline led me to believe. Probably have myself to blame!

That said, if you’re in the City and you’re looking for a great place to buy LEGO, Emporium Melbourne’s MyKids is definitely worth a visit. It’s well stocked (for now) and you get to check out some cool creations by Ryan McNaught. Should be even better if we get a Myer sale… which should happen any day now.

UPDATE: Received some additional information from Myer about MyKids and the LEGO Concept Store.

Have you been to MyKids in Emporium Melbourne? What did you think of the LEGO section? Let me know in the comments!