Hate to be the bearer of bad news, but here it is – Australia will not be getting the second wave of Shell LEGO sets. Following promising news from around the world (the promotion recently launched in Malaysia and in other countries around the world), it raised my hopes that we would eventually see the new Shell LEGO sets come to service stations Down Under.

I was also led on after seeing this tweet where they mentioned that the promotion would be coming to more countries, that I tweeted them to see if I could get a confirmation that it would eventually get to Australia. 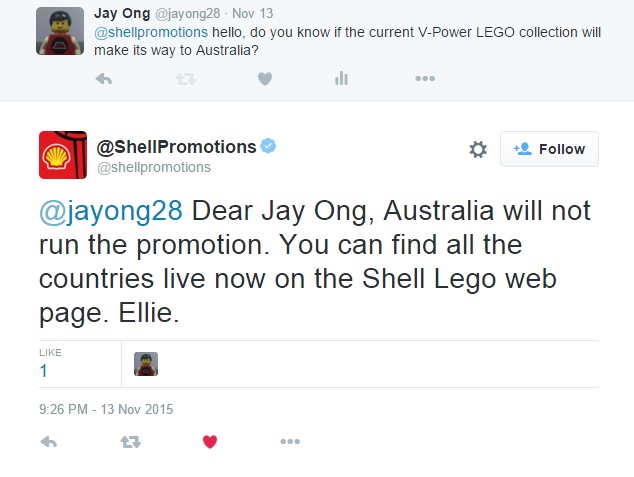 Unfortunately for all of us, they responded and confirmed that Australia will not run the promotion.

Pretty crummy news as it’s kind of unfair that we got the first wave and will be denied the second wave, which probably will not sit well with LEGO Shell and Ferrari fans who are looking to complete their collections.

A small upside is that with the promotion rolling out in more countries, more of these sets should show up on Bricklink and eBay which will most likely be the easiest way to get a complete set. I myself bought a set when I was in the Philippines on a work trip.