UPDATE: Looking for information on the Shell Ferrari LEGO promotion in Malaysia? Check out this post which has all the details! 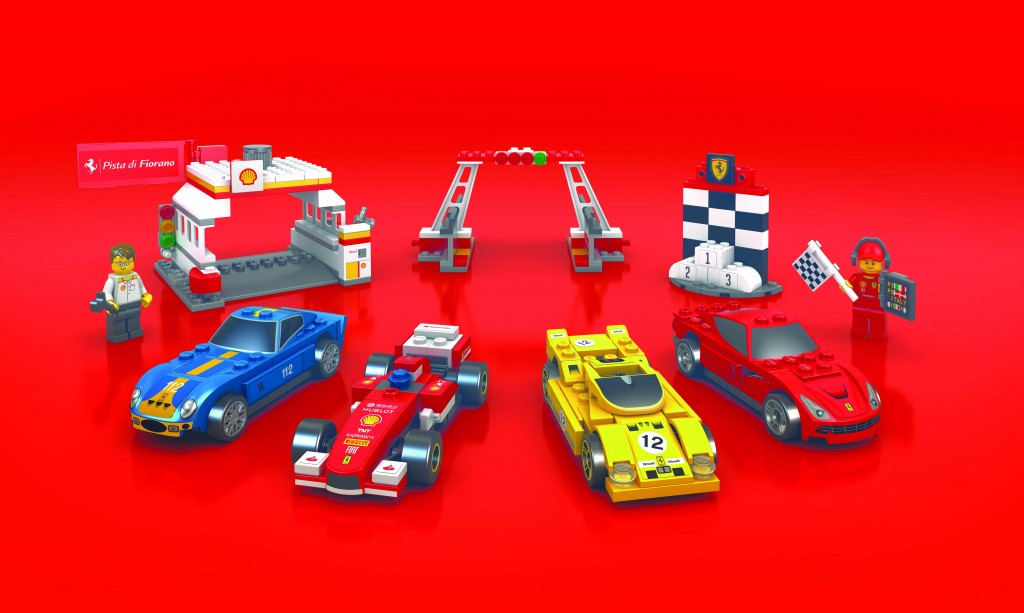 From 29 August to 20 November 2014, fans will be able to purchase these sets at Singaporean Shell petrol stations with every S$60 purchase of Shell V-Power, Shell FuelSave fuel or Shell Diesel.

If you fill up your vehicle with V-Power, each set (except the Shell Tanker) will cost you S$5.95 but if you opt for  Shell FuelSave fuel or Shell Diesel, you’ll have to shell out  S$8.95 for each set.

New models will be released every two weeks. You can refer to the promotional poster below for more information on when each model becomes available.

The Shell V-Power LEGO Collection is the result of a collaboration between Ferrari, LEGO and Shell to commemorate  Shell’s 60-year technical partnership with Scuderia Ferrari. The Ferrari Models feature the smallest pull back motor ever produced by The LEGO Group, which apparently propels each vehicle more than 2 metres in a single pull.

They’re the same motors as the ones in the previous LEGO Shell Ferrari sets we got last year.

Will these sets be released outside of Singapore? I checked with Shell Singapore’s PR on whether this promotion would be extended to Malaysia, Australia or other countries but they were not able to provide any confirmation, so for the time being Singapore will be the only place to get these Shell LEGO sets. For now.

I have no doubt that this promotion will eventually roll out to Malaysia or Australia. To put things in perspective, their last promotion for the first wave of Shell LEGO sets rolled out in Singapore in August 2012, with Malaysia getting them in December 2012. Australia received the Shell Ferrari LEGO sets in March 2013.

I’d say it’s a matter of time before these sets become available on our shores, so don’t panic-buy and overpay for these sets when they inevitably get listed on eBay by enterprising Singaporeans looking to make a quick buck.

Personally, I really like this second series of Shell LEGO sets simply because it’s not just Ferrari cars but we’re also getting some brick built structures such as a Petrol Station and a Podium. The cars themselves look pretty cool as well, with the blue one being my favourite so far based on what I’ve seen in the hi-res images.

It looks like stickers will be aplenty again, even for the minifigure torsos but there are 2 printed elements (the front part of the car) that I can spot immediately, on the blue Ferrari 250 GTO and red Ferrari F12Berlinetta which is always nice to have.

I think that this the timing of this promotion is a little odd seeing as how the whole Greenpeace controversy hasn’t really died down yet. That said, launching this promotion in Asian territories where the Environment isn’t that big of a priority should be pretty safe for LEGO’s brand image.

Still, I think that LEGO could’ve waited till most people forgot about it and Greenpeace has chosen another evil polluting corporate entity to bully. As you can probably tell, I don’t really care about the whole Greenpeace campaign as I feel that it’s just taking advantage of LEGO’s surge in popularity.

Here are more details on the Shell LEGO models, their piece counts and when they’ll be available in Singapore. 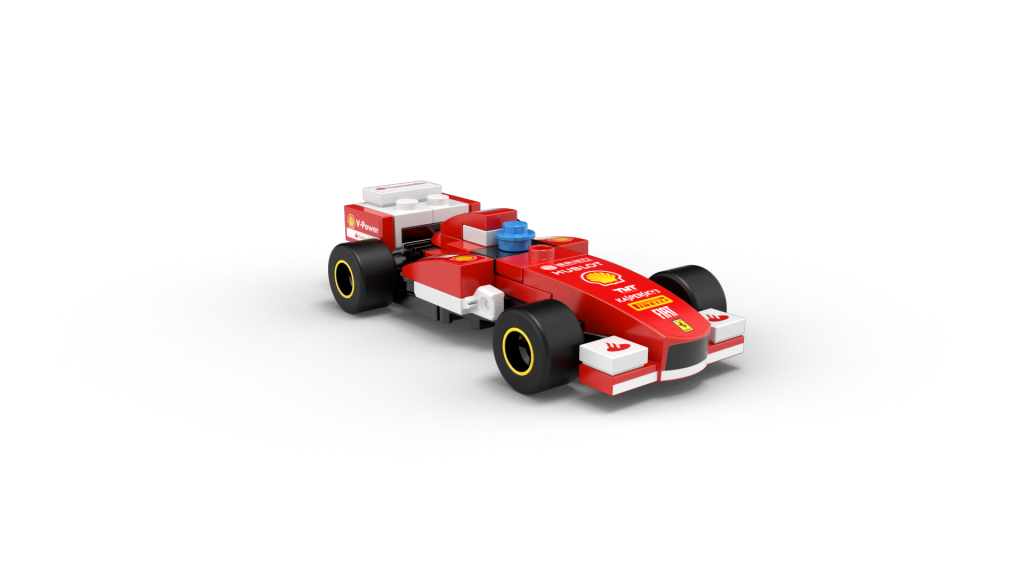 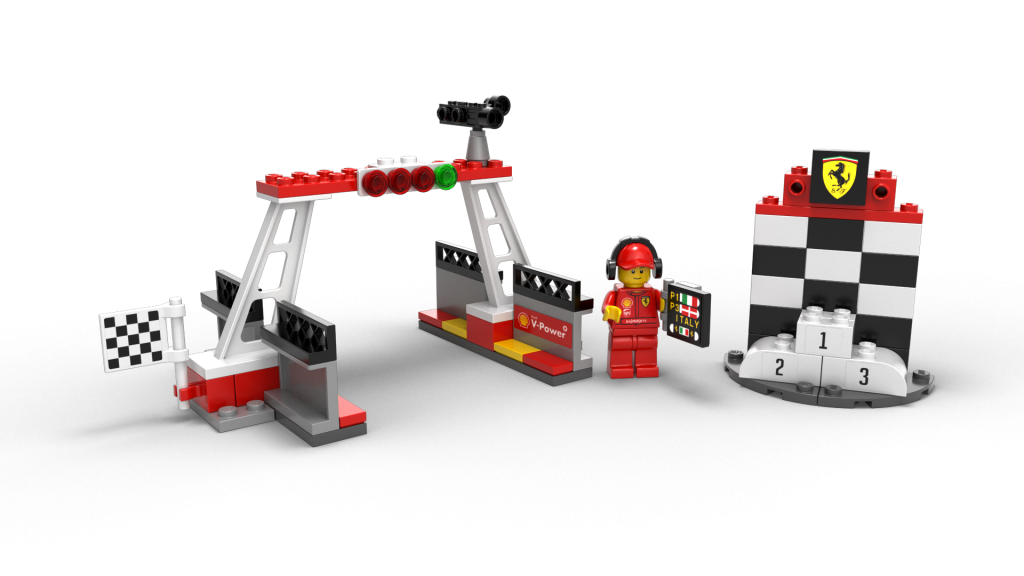 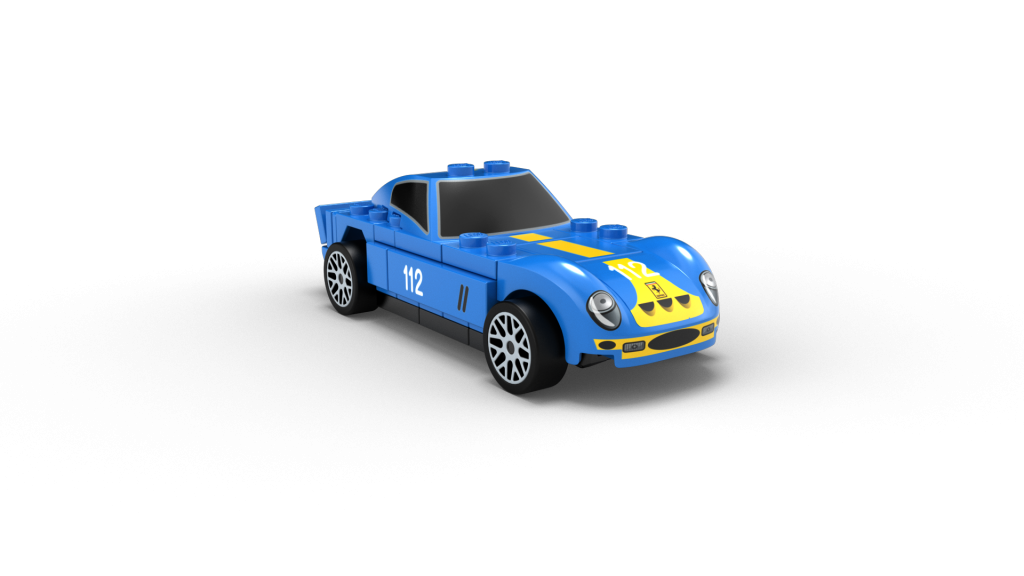 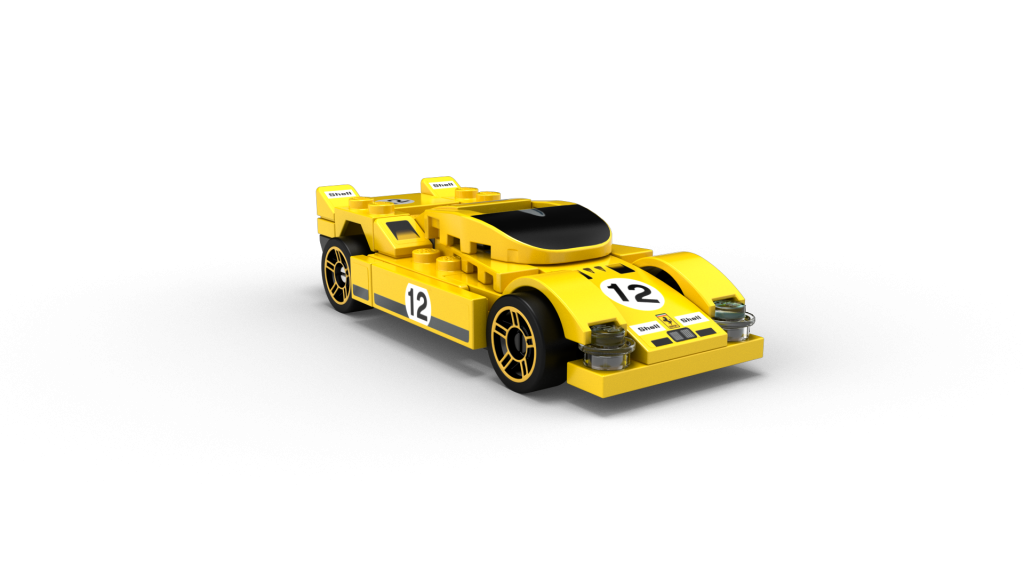 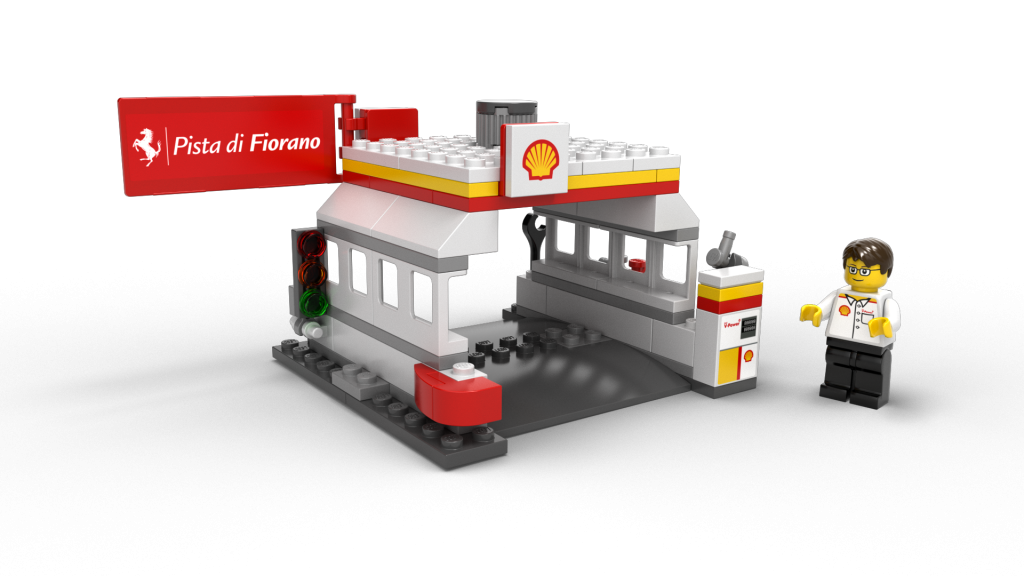 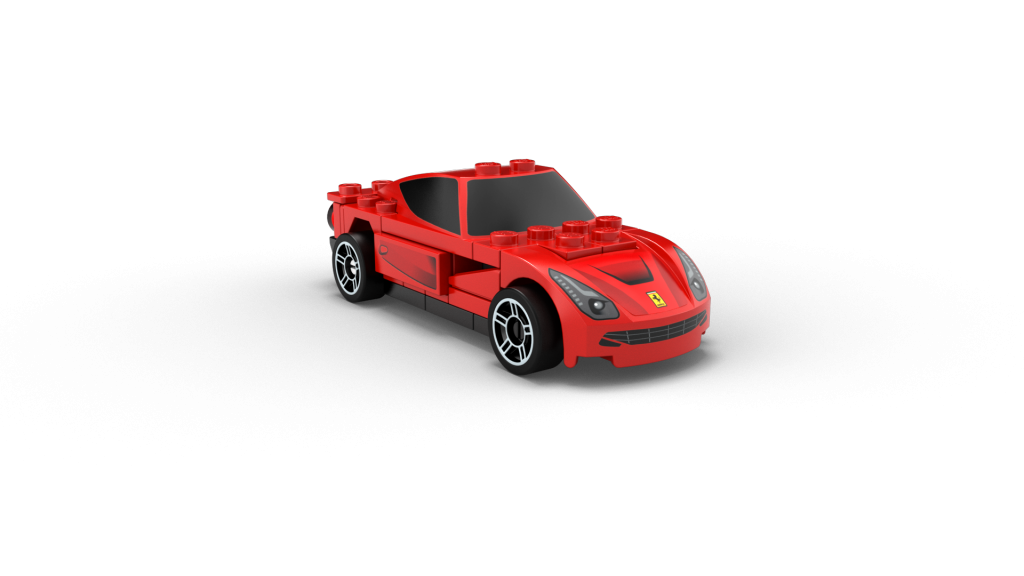 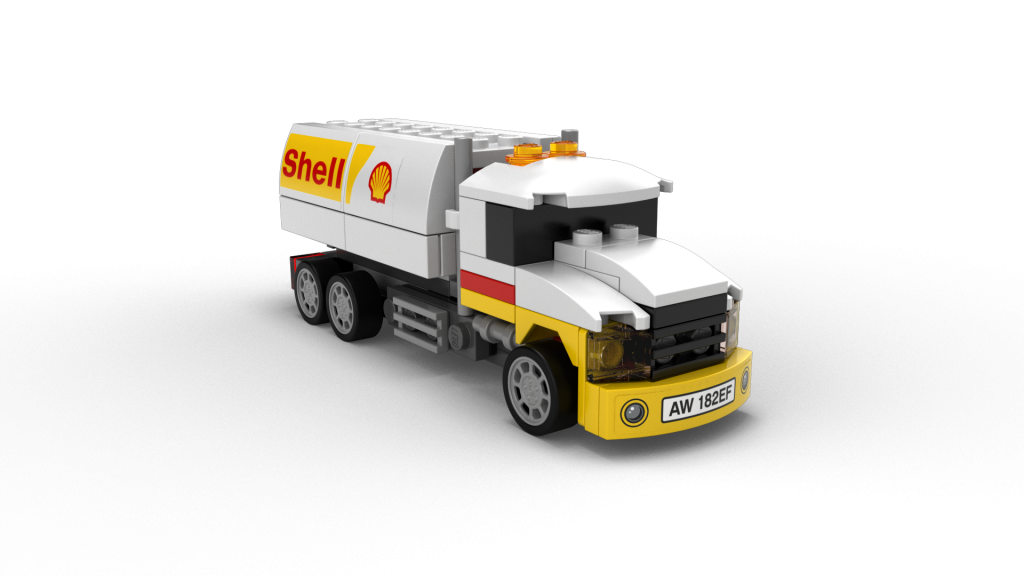 Shell has launched its new Shell V-Power LEGO Collection, an exclusive range of buildable Ferrari collectibles made out of LEGO bricks. Available today at Shell stations across the island, the new range embodies the spirit of technological innovation and improved performance that is at the heart of Shell V-Power fuel.

Created in collaboration with Ferrari and the LEGO Group, the Shell V-Power LEGO Collection introduces six new models that promise to delight customers when they fill up at Shell. The collection includes four iconic Ferrari cars, a Finish Line and Podium with a Scuderia Ferrari Engineer LEGO Minifigure, and a Shell Station modelled after the one at Fiorano circuit, Scuderia Ferrari’s private racetrack in Maranello, with a Shell Scientist LEGO Minifigure.

“The new Shell V-Power LEGO® Collection builds on the success of the first range of collectibles launched in Singapore in 2012.  It is significant that Shell motorists in Singapore will be the first in the world to enjoy this new collection. With new models and more bricks for selected models, all still at a very affordable price, we hope that we can continue to capture the imagination of customers and motorsports fans young and old to construct their very own racing world,” said Louis Tan, General Manager of Retail Sales & Operations, Shell Singapore.

With a minimum fill-up of S$60 of Shell V-Power fuel, customers will be able to purchase one of the six LEGO models for S$5.95.  The models will also be available to customers who fill up a minimum of S$60 of Shell FuelSave fuel or Shell Diesel at a price of S$8.95 each. New models will be released every two weeks. Drivers will also have the special opportunity to purchase the limited-edition Shell Tanker for S$10.95 with minimum S$60 spend on Shell V-Power fuel from 21 – 30 November 2014.

The limited-edition collection celebrates the shared passion for performance in Shell’s 60-year technical partnership with Scuderia Ferrari. Shell has worked together with Ferrari and the LEGO® group for more than half a year to create the new cars and playsets. The model cars in the new collection again feature the smallest pull-back motor ever produced by the LEGO Group, created especially for Shell to propel each vehicle more than 2 metres on a single pull.

New models will be released every two weeks with exciting activities and opportunities in selected stores. Motorists, race fans and toy enthusiasts alike can also look forward to the release of the limited-edition Shell Tanker model, available from 21 – 30 November 2014 with minimum S$60 spend on Shell V-Power fuel.