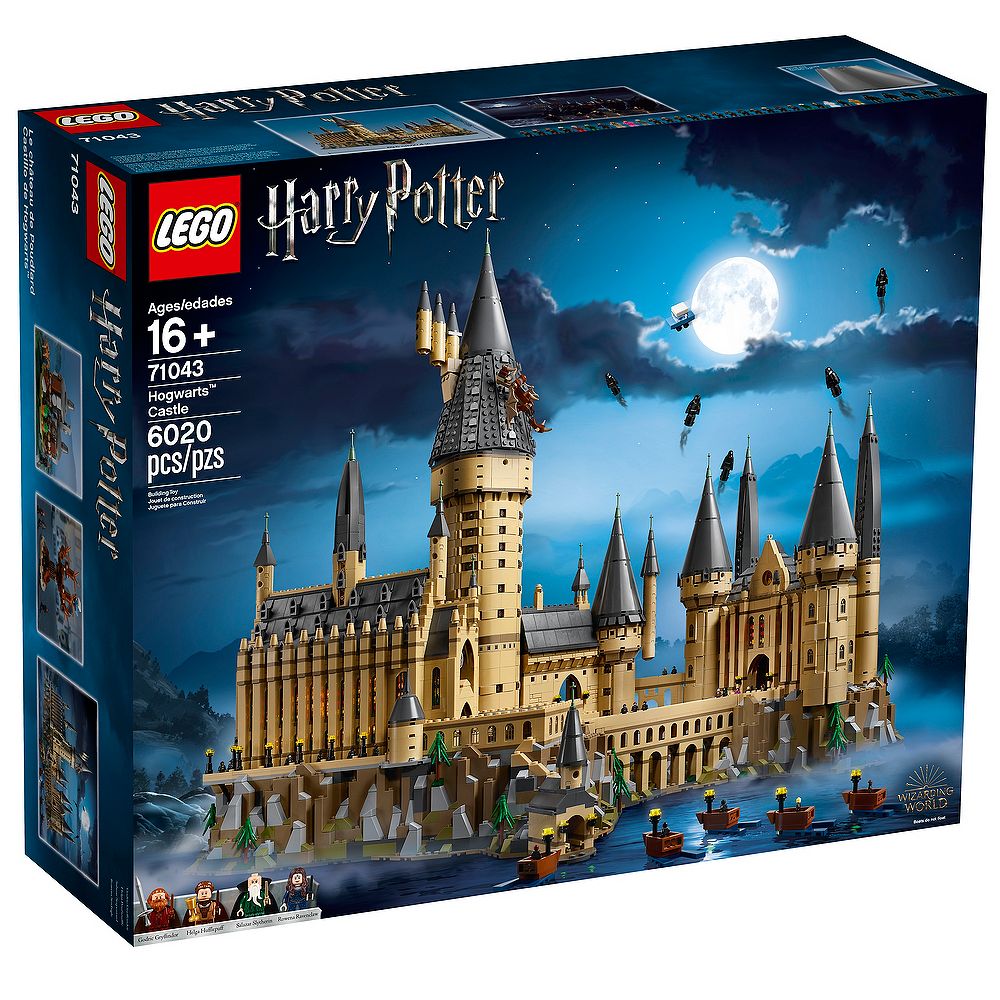 LEGO Harry Potter fans are in for a treat with this stunning microscale rendition of Hogwarts Castle – all 6020 magical pieces, which makes this the second largest LEGO set by piece count. And as you can expect, it won’t come cheap – $399 in the US and $649.99 in Australia.

You best hope that your parents left you an entire vault filled with Galleons at Gringotts to afford Hogwarts. The release date for 71043 Hogwarts Castle is 1 September, however there will be a VIP pre-sale on 15 August 2018.

Here’s the regional pricing for the set: 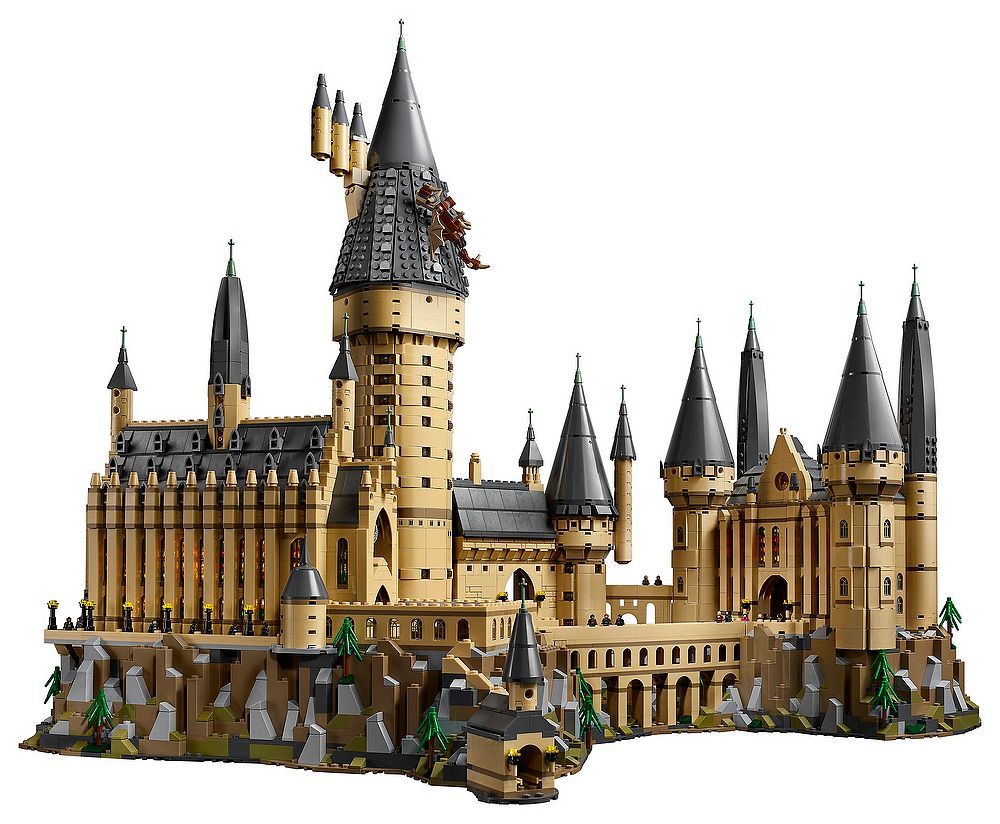 First of all, let’s discuss the set’s design. At a microscale level, it took me a moment to come to grips with it as I had honestly expected a minifig-scale set (one can still dream!) but after taking the day to study the photos in detail, I believe that microscale was the right decision to be made.

Hogwarts Castle is massive, and to accurately capture each facet of its iconic design, microscale is definitely the way to go. With one glance, you can instantly recognise the signature steeples, towers and sections such as the Great Hall.

The set comes with a total of 32 microfigures featuring students, professors and statues, and Dementors. They’re really tiny, but LEGO have managed to pack a respectable level of detail into the microfigs that you can recognise most of them. 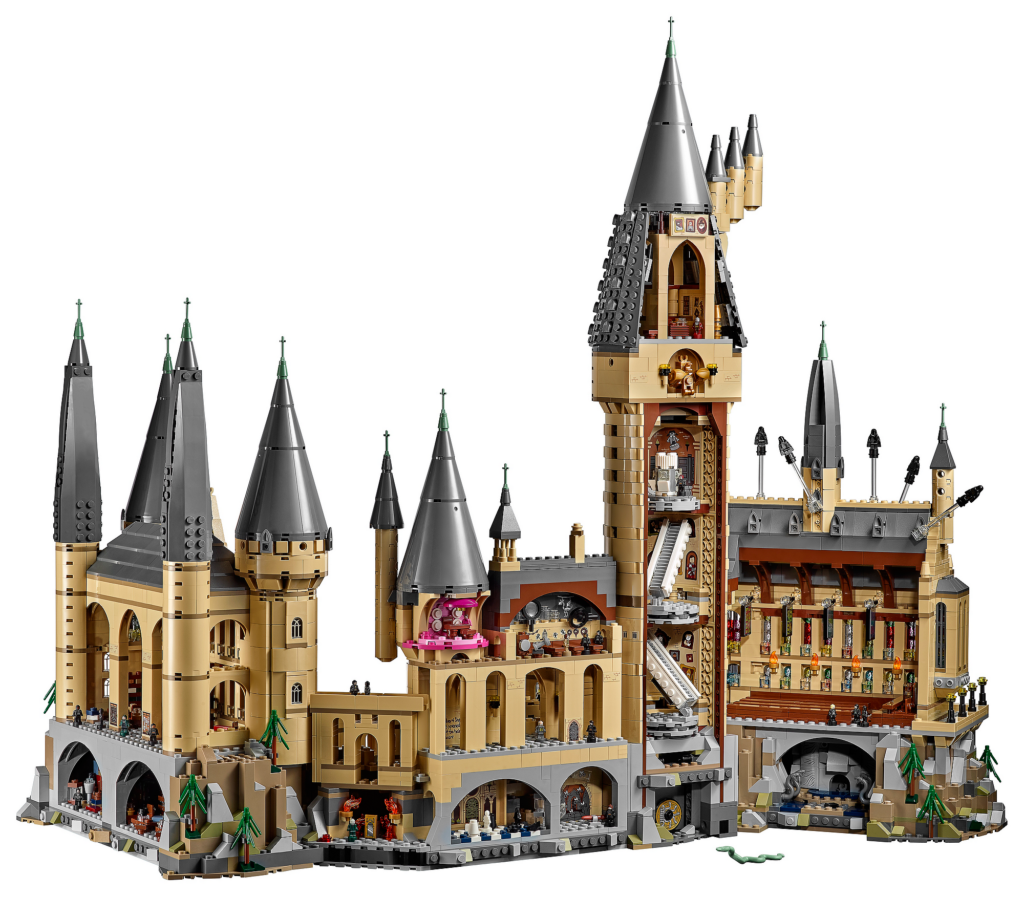 While Hogwarts Castle might look stunning from the front, the back with the exposed interiors are the real draw of the set, and will surely delight any bonafide Potterhead.

When I first saw the photos, I couldn’t help but grin and try my best to name all the different chambers, rooms and settings that will feel familiar to fans of the books or movies.

This is fan service at its best, and I absolutely loved how they packed iconic moments from each of the books into the rooms. As if the design didn’t look Hogwarts enough, the interiors really seal the deal to make this THE ultimate Harry Potter set. 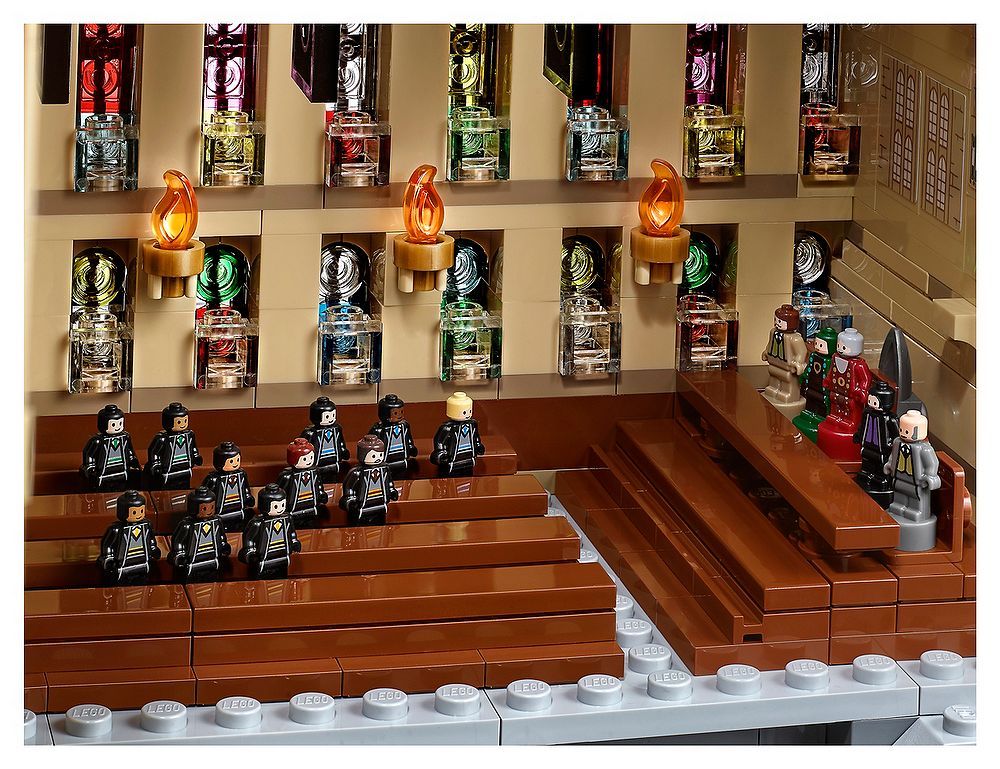 From Book 1, we have a scene set up in the Great Hall, possibly for the Sorting Ceremony and boasts stained glass windows, floating candles and house banners. 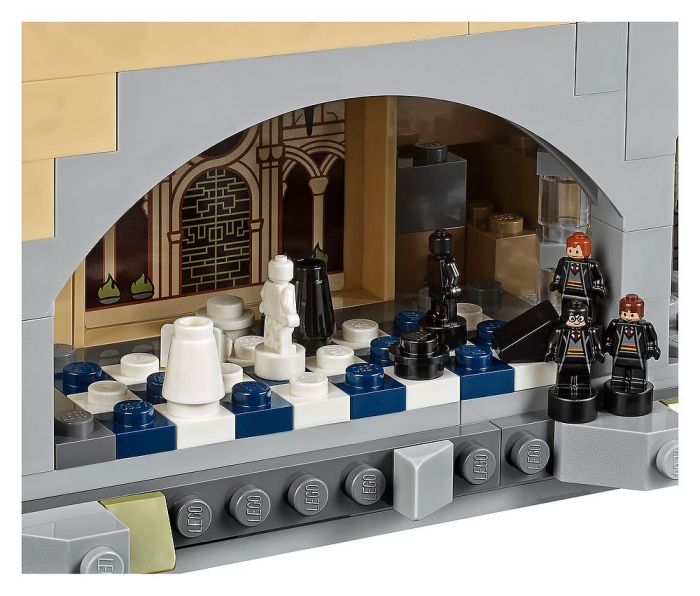 From Harry Potter and the Philosopher’s Stone (Book 1), we have the Chessboard Chamber, where Harry, Ron and Hermione had to navigate a game of supersized Wizard Chess which was one of the obstacles guarding the Philospher’s Stone. 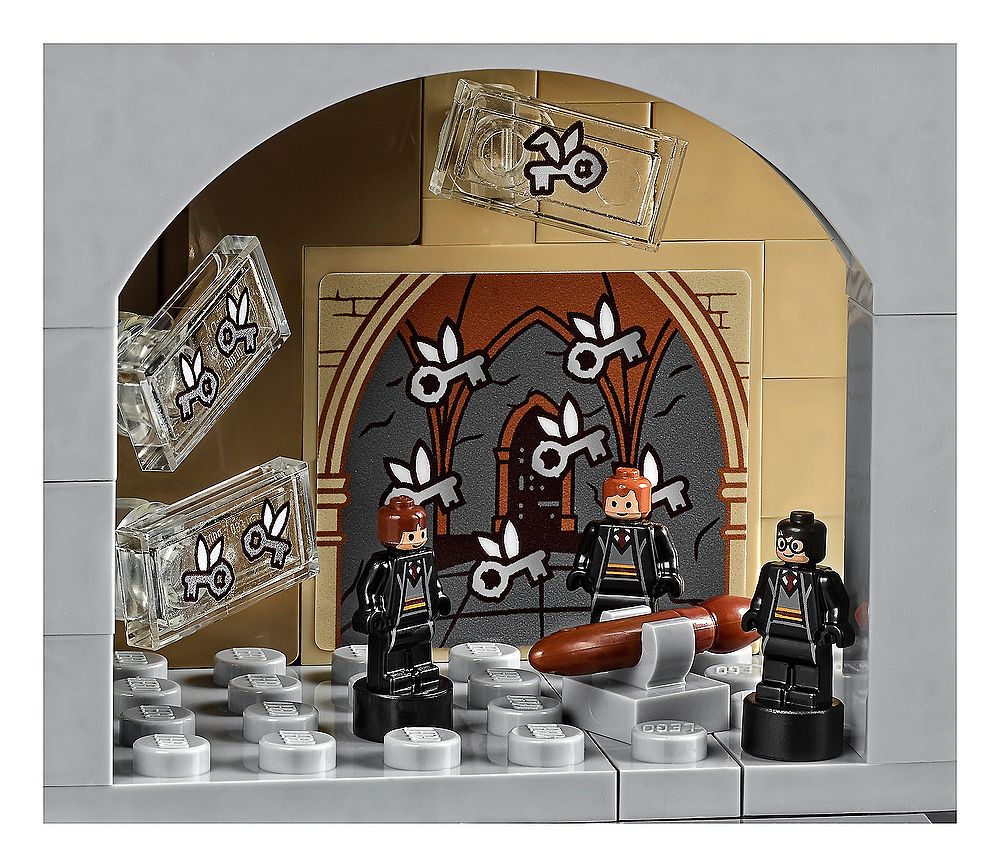 There seems to be a ton of Philospher Stone references, such as the room with the Winged Keys, and a broomstick (represented by a paintbrush) to find the right one. 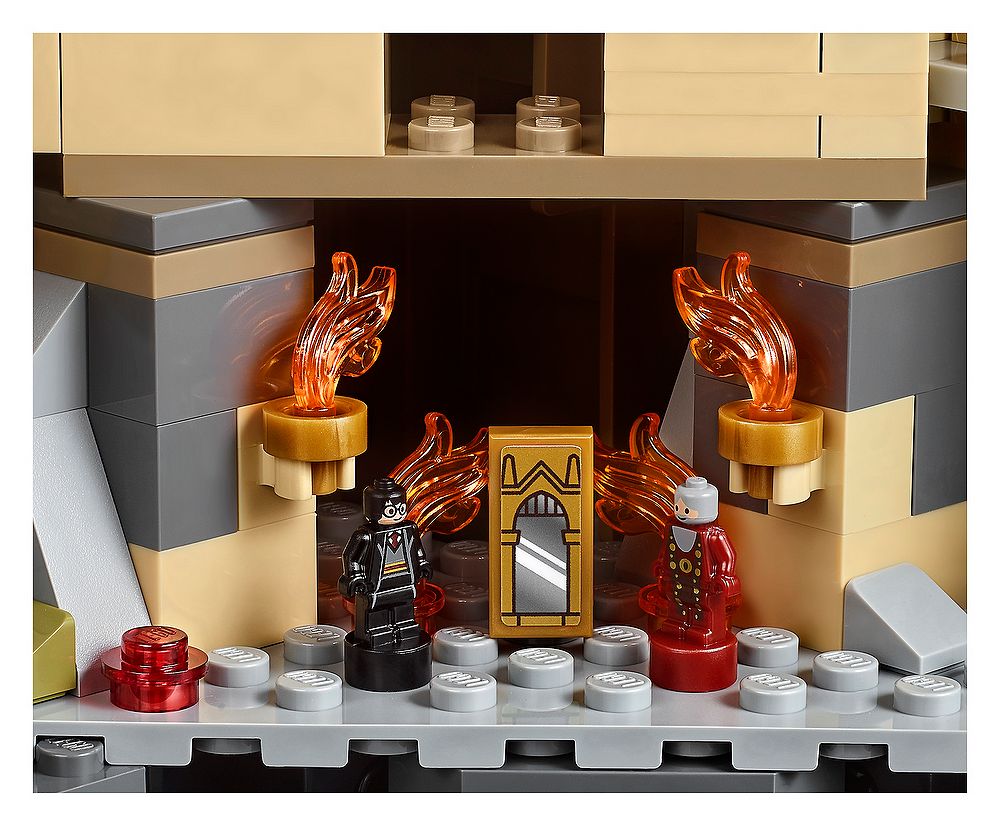 From Book 1, we also have the Mirror of Erised, which as you know, held the Philospher’s Stone within it. 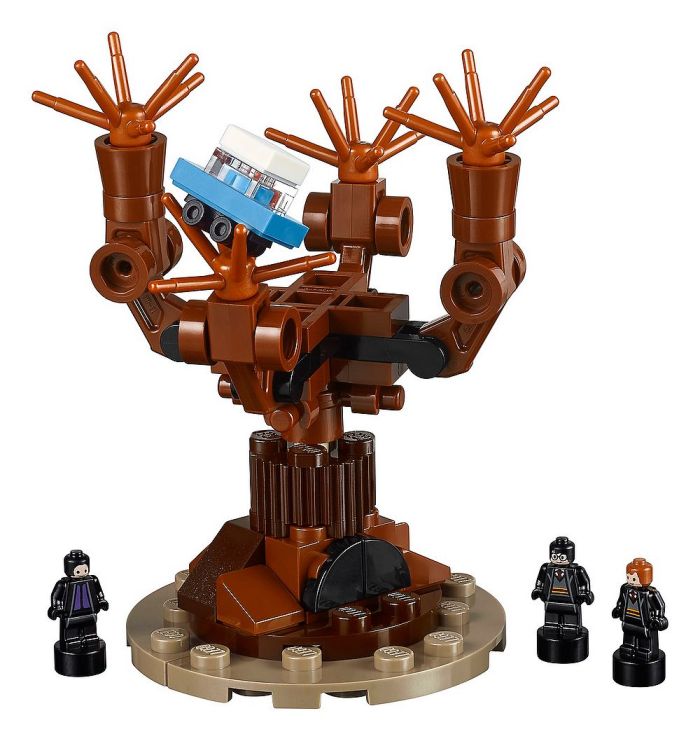 For Harry Potter and the Chamber of Secrets, we of course have the Whomping Willow, complete with Mr Weasley’s Ford Anglia caught in it. 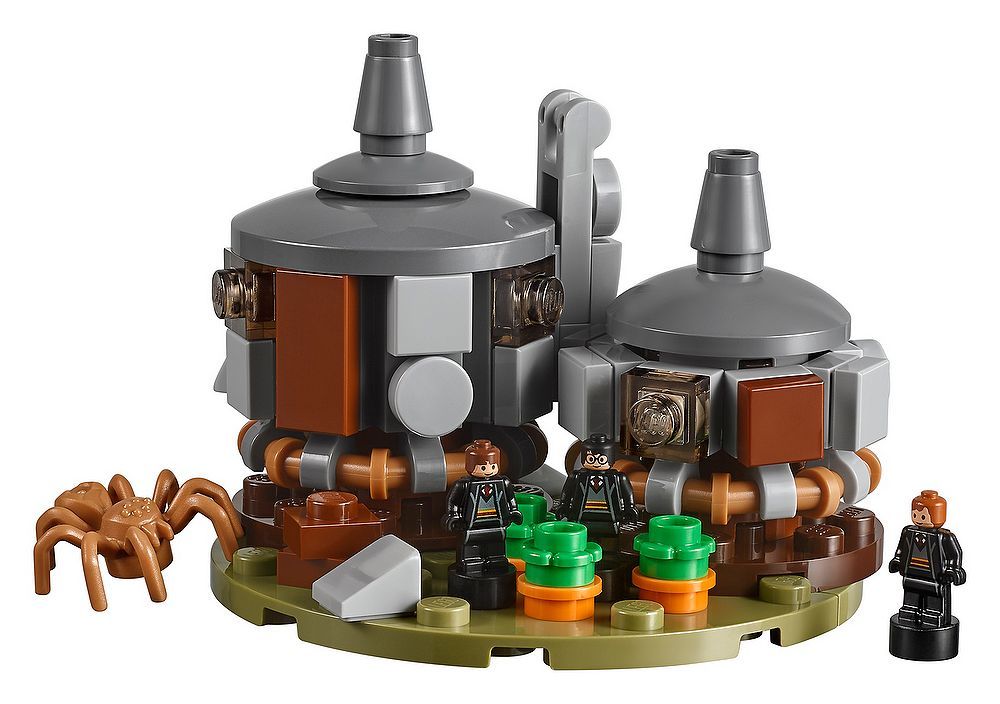 Still in Book 2, we have Hagrid’s Hut, with an Aragog spider figure. Love that they included Hagrid’s giant pumpkin patch! 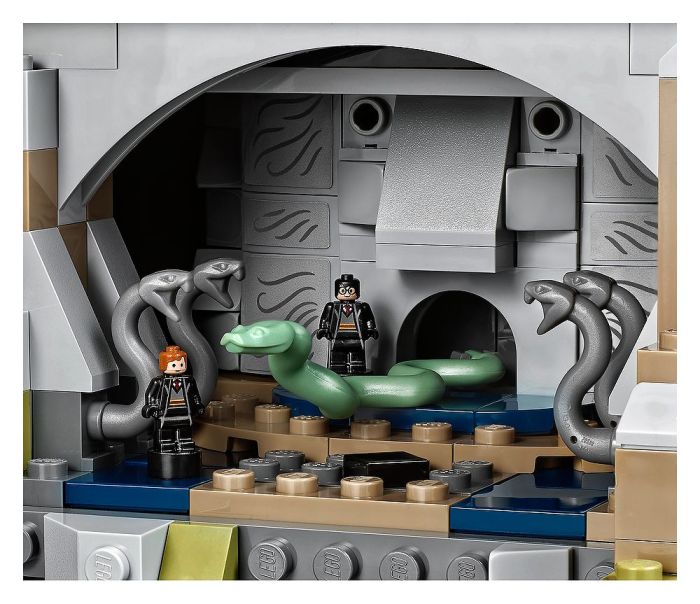 Book 2 has the Chamber of Secrets represented, complete with a giant Basilisk. The Basilisk and those awesome cool pearl grey snakes look like new elements, and I can’t help but think they look amazingly cool. On the floor, represented by a black tile is Tom Riddle’s diary. 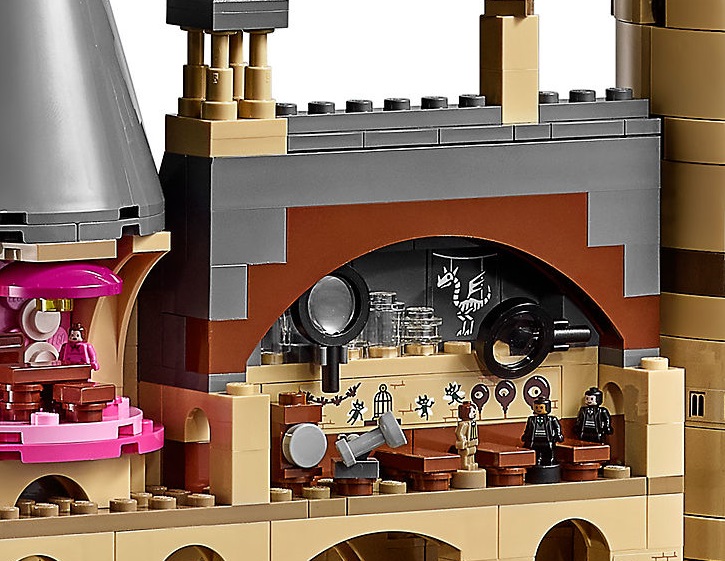 Representing Prisoner of Azkaban, we of course have the Defence Against the Dark Arts classroom, featuring a closet which contains a Boggart. Surrounding Hogwarts are also a bunch of Dementors, although that could’ve been from Book 7, but I think most people associate Dementors with Book 3. At least I do. 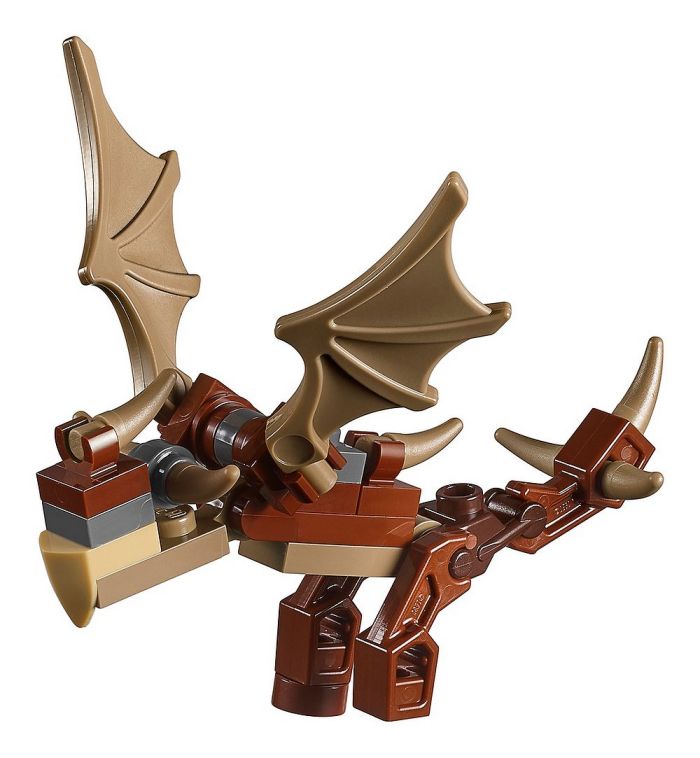 For Book 4, we have a brick-built Hungarian Horntail, just casually perched on one of the Hogwarts Towers. 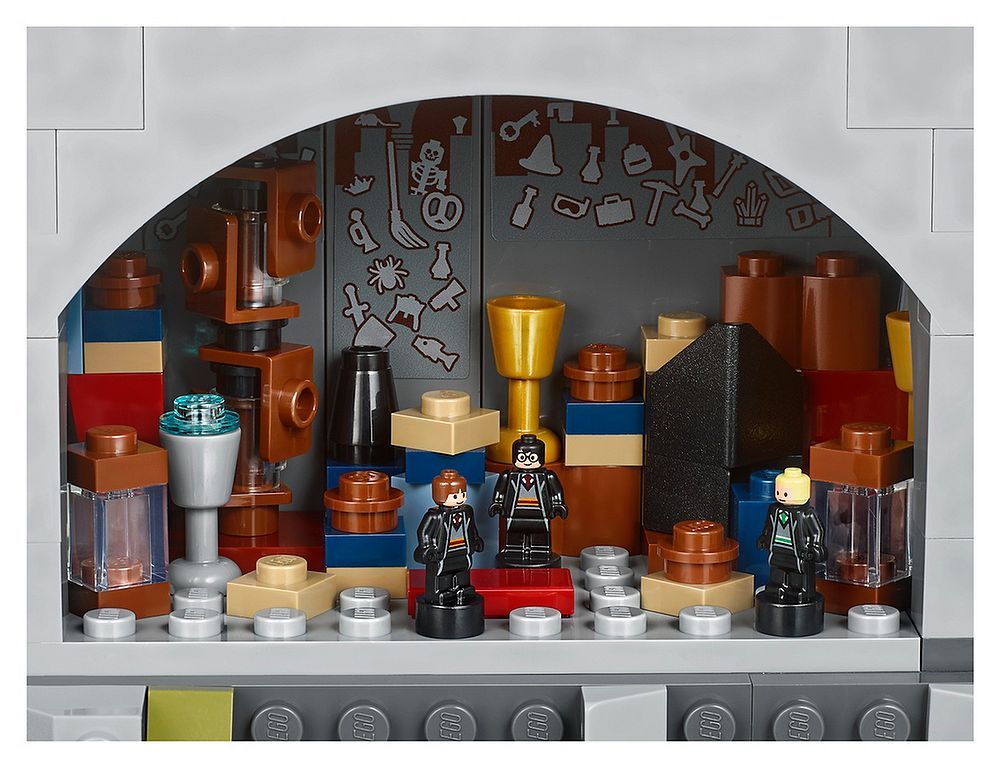 Glad to see the Room of Requirement making an appearance, as a nod to Order of the Phoenix, where Dumbledore’s Army gathered here in secret to practice and hide from Dolores Umbridge and her Inquisitorial Squad. 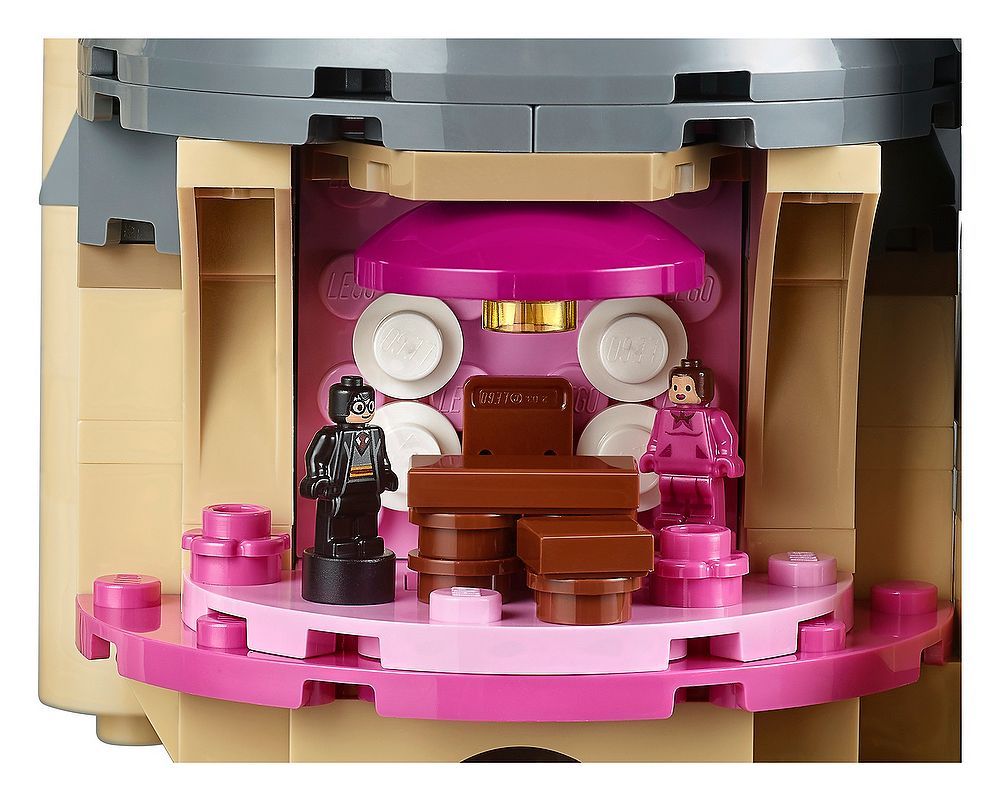 Speaking of Umbridge, my blood instantly started to boil as soon as I saw this photo – of Umbridge’s office. It’s been years and she’s a fictional character but I have never detested a literature character more than her. Hem hem still makes my skin crawl. 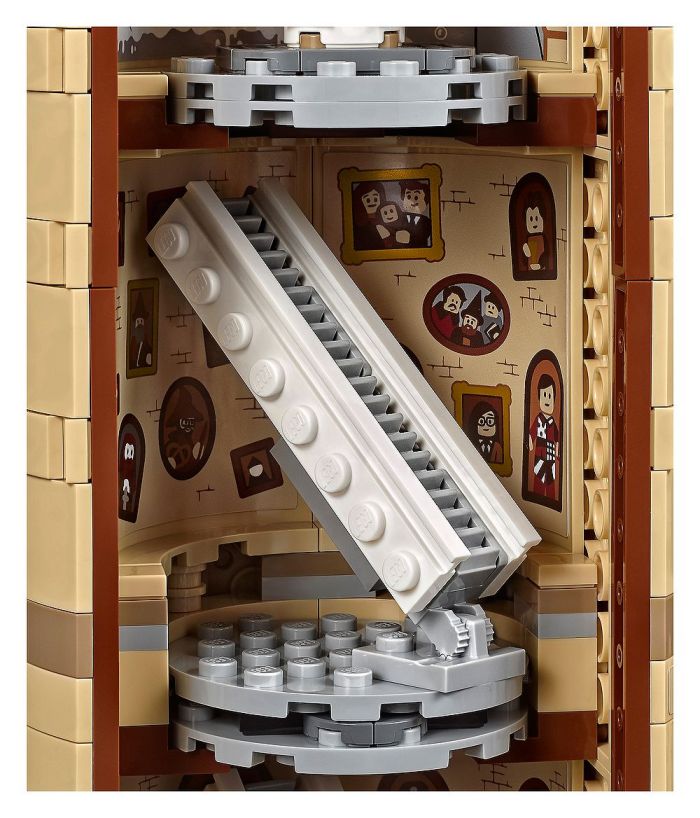 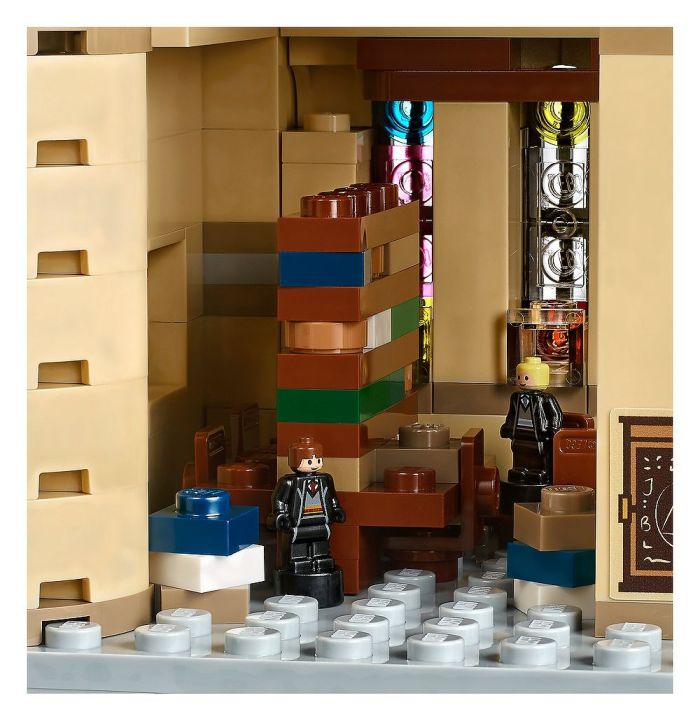 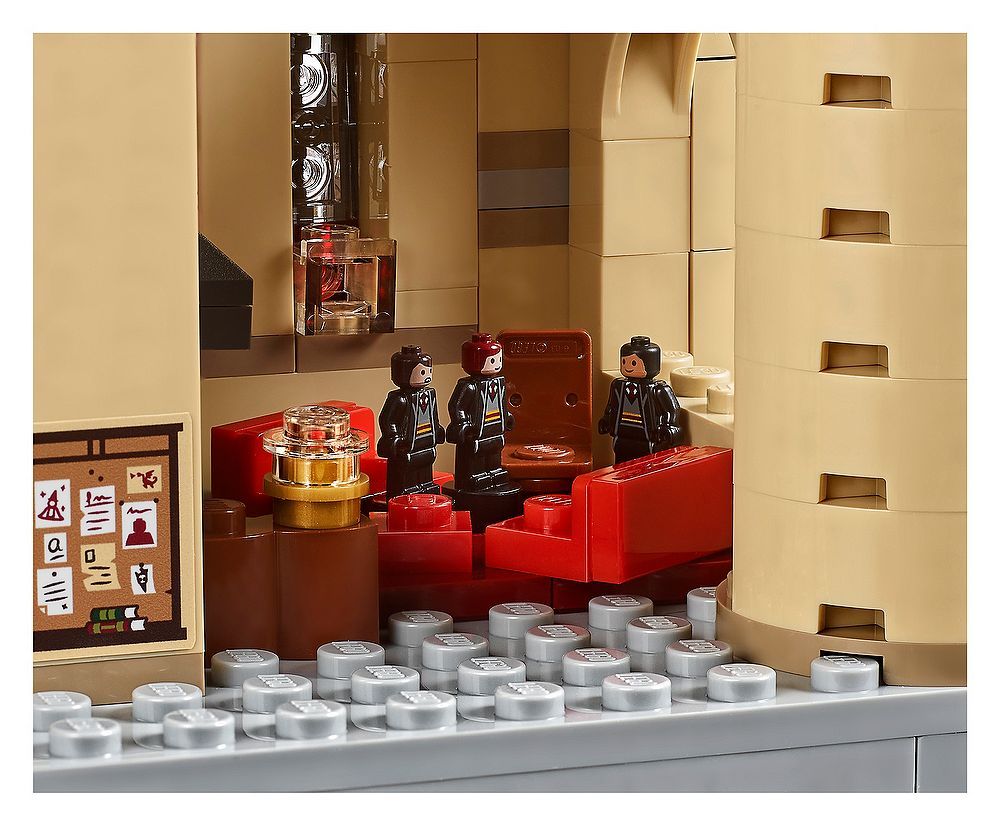 Apart from these movie-specific scenes, there are also familiar haunts such as the shifting staircases, Gryffindor Common Room and even the library. Scanning the entire build, there are just so many more details packed into the build that I can’t wait to properly explore the corridors and secrets of Hogwarts Castle when I build this in September.

As an extra special touch, and a further bonus for Harry Potter fans, the set comes with 4 exclusives minifigures of the Hogwarts founders (and namesakes of each house). From left to right we have  Godric Gryffindor, Helga Hufflepuff, Salazar Slytherin and Rowena Ravenclaw who were widely regarded as the greatest witches and wizards of their time.

Such a fantastic touch to the overall set.

Now the big talking point is the price. At AU$650, this set is one of the most expensive on the market, but given the piece count, and how terrific it looks, it’s one of the sets that I can definitely justify splurging on. Whether I’ll do it at full price is debatable, but I feel that for what we’re getting, this set is a Potterhead fan’s dream come true.

This is undoubtedly THE definitive LEGO Harry Potter set, and while I’m a little sad that we’re not getting a minifig-scale Hogwarts, I think this will go down as one of the most iconic and inspired LEGO sets of this generation.

I absolutely can’t wait for this set. I’m so glad that LEGO brought back the Harry Potter license and in such stunning fashion – this is going to be one heck of a display piece.

So now that you’ve seen 71043 Hogwarts Castle in all its splendour, I’d love to hear your thoughts on the set. Take the poll and let me know in the comments!

The 2018 LEGO Hogwarts Castle set will go on sale on LEGO.com on 15 August for LEGO VIPs, and 1 September for the general public. If you’re lucky enough to live in a country with a LEGO store, they will be made available there too.