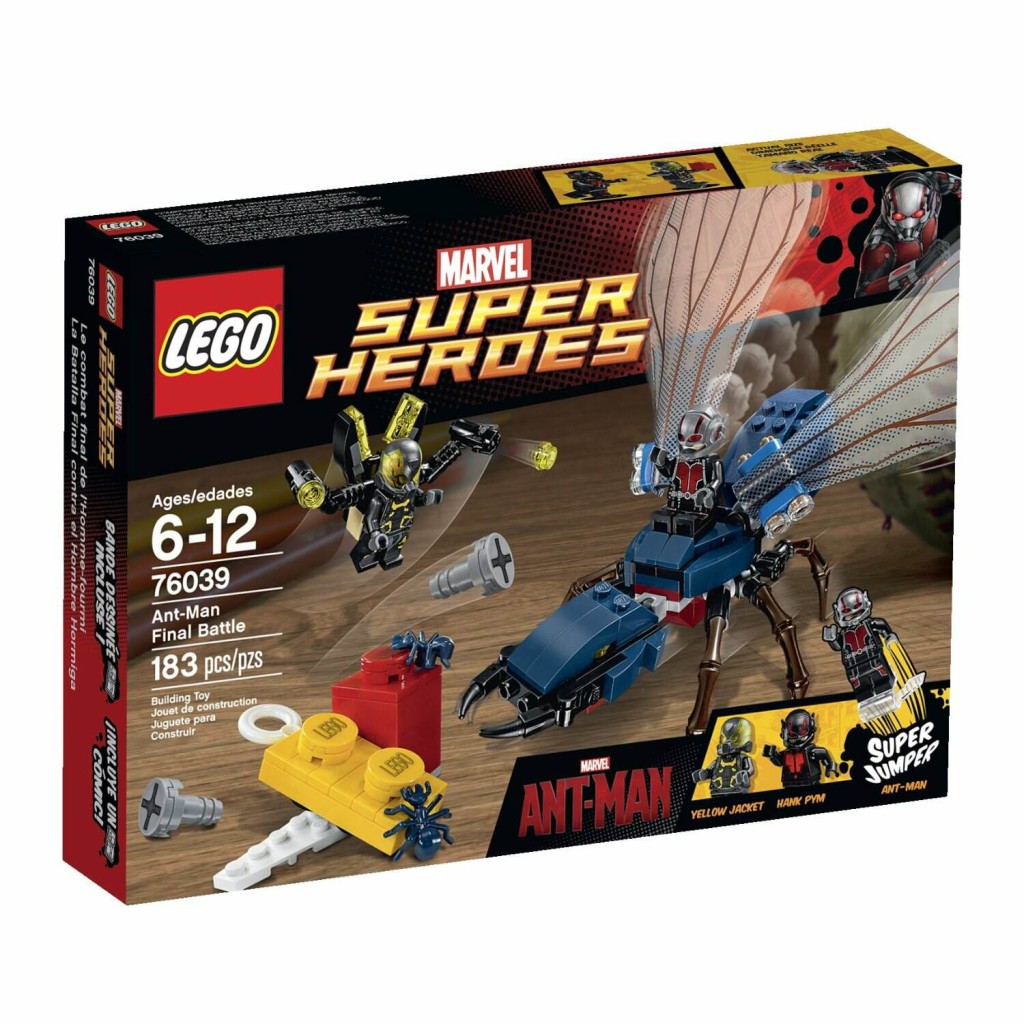 I took an extended break in Adelaide over the weekend and managed to catch Marvel’s latest blockbuster Ant-Man in the cinemas. I’m a huge fan of Paul Rudd and thoroughly enjoyed the entirety of the movie. Unlike other Marvel films which usually focus on titanic struggles between the forces of Good and Evil, dueling to prevent utter destruction to Earth or the Galaxy, I really liked Ant-Man’s refreshing change of pace and lowkey setting.

There is no big bad guy threatening to blow up Earth, no immensely powerful cosmic foe out to exterminate the human race or even a super-powered nemesis to deal with. Ant-Man is a clever heist movie, relatively isolated (but still occupying the main Marvel Cinematic universe) from the feats of The Avengers or Thor in a very satisfying self-contained microscopic bubble.

Paul Rudd is as lovable as Paul Rudd can be, Michael Peña steals almost the entire show with his comedic genius and other than Marvel’s trademark move of serving of a very weak and uninspired villain, Ant-Man is more than capable standing toe to toe against some of Marvel Studio’s biggest hitters.

Anyway, apologies for digressing from the point of this post with my mini movie review. I left the cinema in light spirits and immediately my mind turned to the lone LEGO set that was released to coincide with the film’s release – Ant-Man Final Battle and how I was looking forward to building and reviewing it. 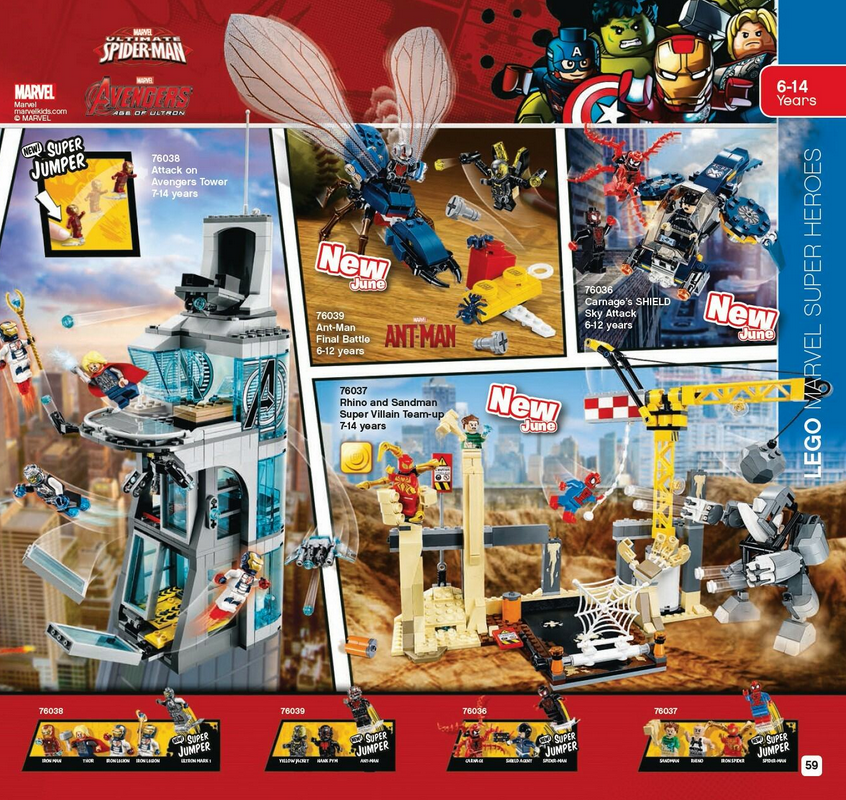 It’s almost August and the set is nowhere to be seen on Australian shelves, even though it was slated to be released in June according to the latest 2015 Australian LEGO retail catalogue. There have been well-publicized issues with the structural integrity and design of the set which caused it to be delayed in other territories. The set did eventually start showing up around the world after the issue was fixed but its absence has not gone unnoticed here in Australia.

I reached out to LEGO Australia to get an official comment on the availability of this set, and I have to be the bearer of bad news – 76039 Ant-Man Final Battle will not be ranged in Australia and will therefore only be available online.

As an Australian LEGO fan, I have to say that this is yet another disappointment since I’ll have to jump through unnecessary hoops to get my hands on this set. This follows a disturbing trend of a selected number of sets and themes that have simply not shown up in Australia at all. Ant-Man joins the illustrious list of:

LEGO Australia’s minimum order threshold of $200 for free shipping makes it particularly tricky when it comes to ordering single sets from LEGO.com.

If this is something that grinds your gears as much as it does mine, I urge you to share your thoughts in the comments section or write to LEGO themselves via their customer service channels to voice your displeasure.

This begs the question, what is the best way to buy Ant-Man Final Battle if you’re located in Australia? Here are your options:

Ant-Man Final Battle costs $40, so you’ll either have to be lucky and have 4 other friends who want to share the order to hit the free shipping threshold. Alternatively, you could always wait till 1 August 2015, when the Big Bang Theory set becomes available or bundle it together with the newly released Creator Ferrari F40. Unless you plan on getting any other sets, having to spend at least $200 just to get this set shipped to you for free is a bit of a hassle. 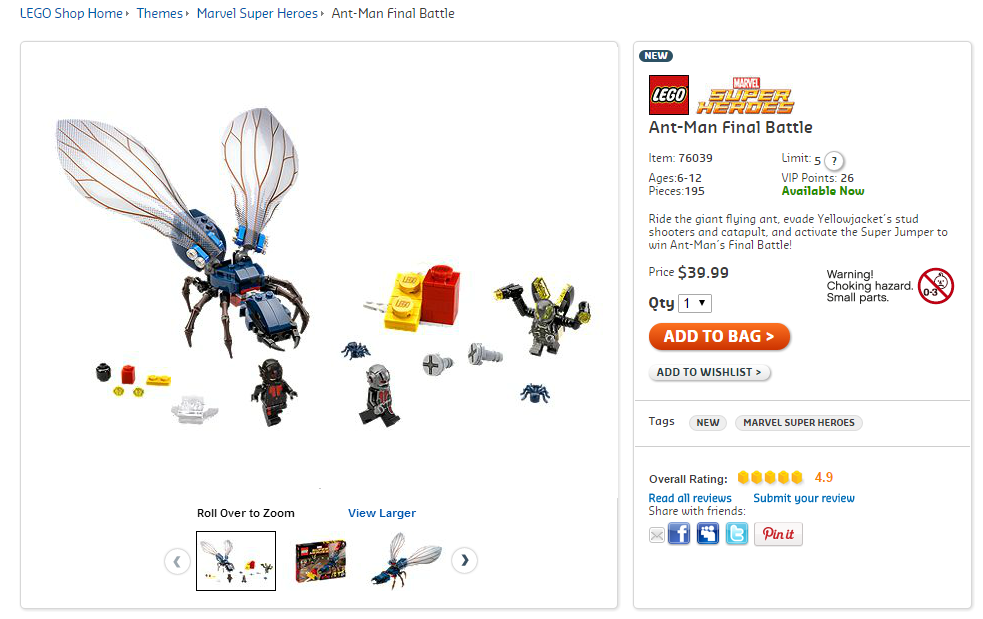 Pros: You get VIP points.
Cons: Expensive shipping costs if you don’t meet the $200 threshold.

2) Import it from Barnes & Noble

As an alternative, you can purchase Ant-Man Final Battle from US retailer Barnes & Noble who ship to Australia. The weak Australian dollar is not doing anyone any favours right now, but B&N have relatively affordable shipping rates and you can order a single set without having to shell out too much paying ludicrous shipping rates. Barnes and Noble have a pretty great policy on shipping rates for additional items – I believe it’s only about $5 per additional item.

It works out quite neatly if you’re looking to buy 2 copies from B&N, but it’s also not too ridiculous paying ~AU$47 if you’re only after 1 copy of this set.

Pros: You can order one set and not have to overpay for shipping.
Cons: Weak Aussie dollar pushes it over to the pricey side of things.

Note: I’m a Barnes & Noble affiliate, so I receive a small commission if you purchase anything from B&N using these links above. All costs go towards paying for the cost of running this blog and any support would be greatly appreciated!

There are also other ways such as buying it on eBay, or Bricklink but these 2 options I listed are the only ones I’m seriously considering and the most economical.

How will I be getting my hands on Ant-Man Final Battle? I’ll probably wait it out till 1 August and add it to my Big Bang Theory order to qualify for free shipping and use some VIP points as well. Under regular circumstances, I’d normally just buy it off B&N but I decided to wait it out this time hoping that it would eventually show up in Australian toy stores. 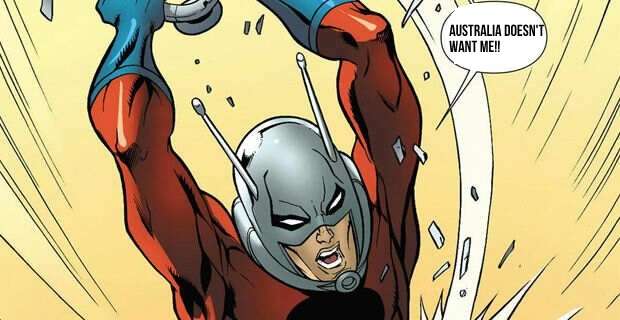 I’ve received many emails from you guys on this and I hope this helps quell any concerns about the retail availability of 76039 Ant-Man Final Battle in Australia. It sucks that it won’t be released Down Under but hey, as an Australian LEGO fan, we tend to get used to being sidelined every now and then.

If you have any strong feelings on this, I’d love to hear your thoughts in the comments section!