So I’ve finally completed my Toys R Us Bricktober 2015 collection! I spent the last two nights putting the sets together and I’m pretty happy with the results! I decided to put together a short review to give people who were curious about the sets a better look at this year’s Bricktober buildings which consist of a Hotel, Train Station, Bakery and Toys R Us Store.

Unlike last year where Toys R Us Australia gave us the option to purchase these sets outright, they were a bit stricter this year. Don’t get me started on the huge bait and switch in Week 1 & 2 where the first two sets were available to purchase online, before Toys R Us reversed their decision. Thankfully, they made amends to fans who made those transactions by offering a special code to obtain the Hotel and Train Station but the whole fiasco left quite a sour taste in my mouth.

I definitely won’t be shopping at Toys R Us in the near future. Not that I do much anyway.

So how did I complete my collection? I’ll be honest, I bent the rules a little and only needed to spend more than $100 once to get the bonus set. I got the Hotel and Train Station using the code that was sent out to customers who wrote to customer service complaining – that was a classy move by TRU that kinda made it better. In week 3, I bought a set to get the Bakery and returned my purchase (but not the promo) the following week. Week 4, I actually bought something at Toys R Us (an exclusive set only available to them) to qualify for the promo.

At the end of it all, I would’ve much rather just paid them $15 each to buy the set outright, like fans in the United States were able to.

Anyway, mini-rant over, let’s get on to the actual Bricktober Sets! 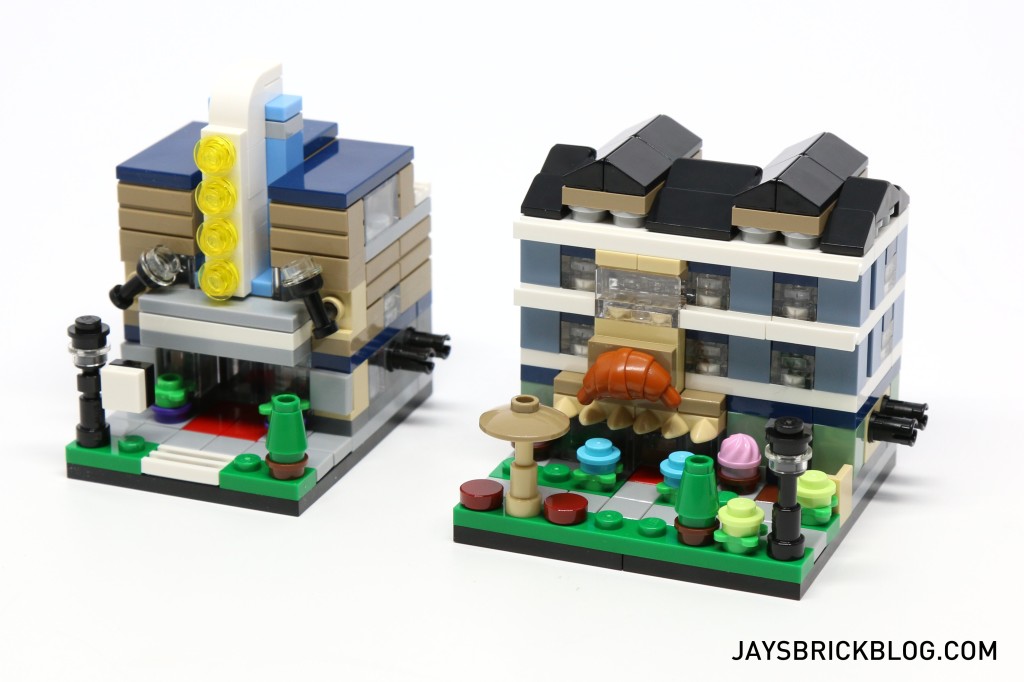 The 2015 Bricktober sets are supposed to be a sequel to last year’s collection of Mini Modulars from Toys R Us and when assembling them, I was surprised to note that the buildings this year were much larger and wider compared to last year. I’m not a fan of the inconsistent scaling as the new ones dwarf last year’s buildings, making them look kinda odd when placed side by side.

Apart from the size difference, the sets are still in the same vein – micro versions of buildings that can be connected to one another in a modular fashion. 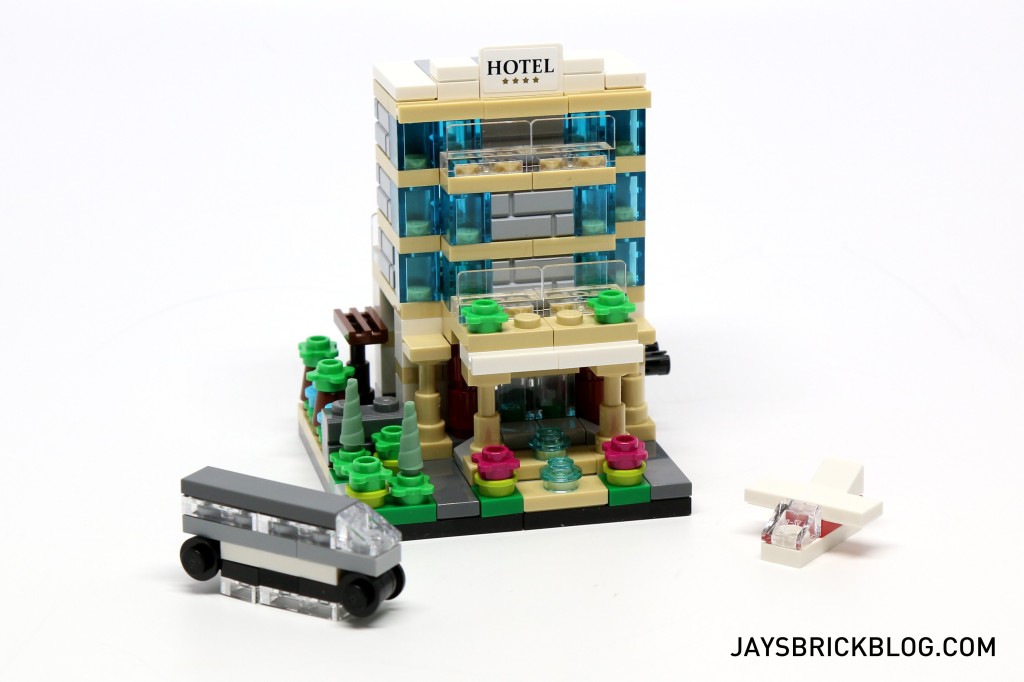 So here’s Week 1’s building the Bricktober Hotel. It’s by far the tallest Bricktober building, featuring a very pleasant and modern looking blend of transparent blue and tan elements. The hotel has lush foliage surrounding it and also comes with a grey bus and a small plane. 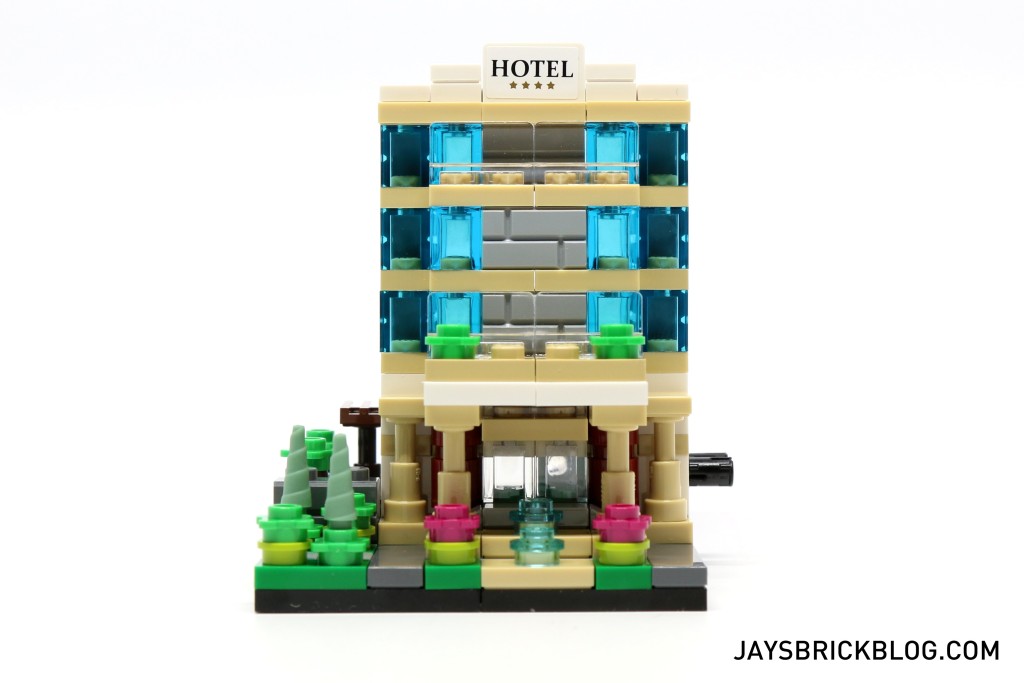 I quite liked the Bricktober Hotel’s facade. As a miniature building, I think the designers captured and translated a hotel’s look quite well and even without the awful stickered “Hotel” sign, you could probably tell that it is meant to be a hotel, thanks to the elaborate lobby area.

I did feel that they went overboard with the foliage, although I’m a fan of the sand green Unikitty horns that are meant to be conical trees. 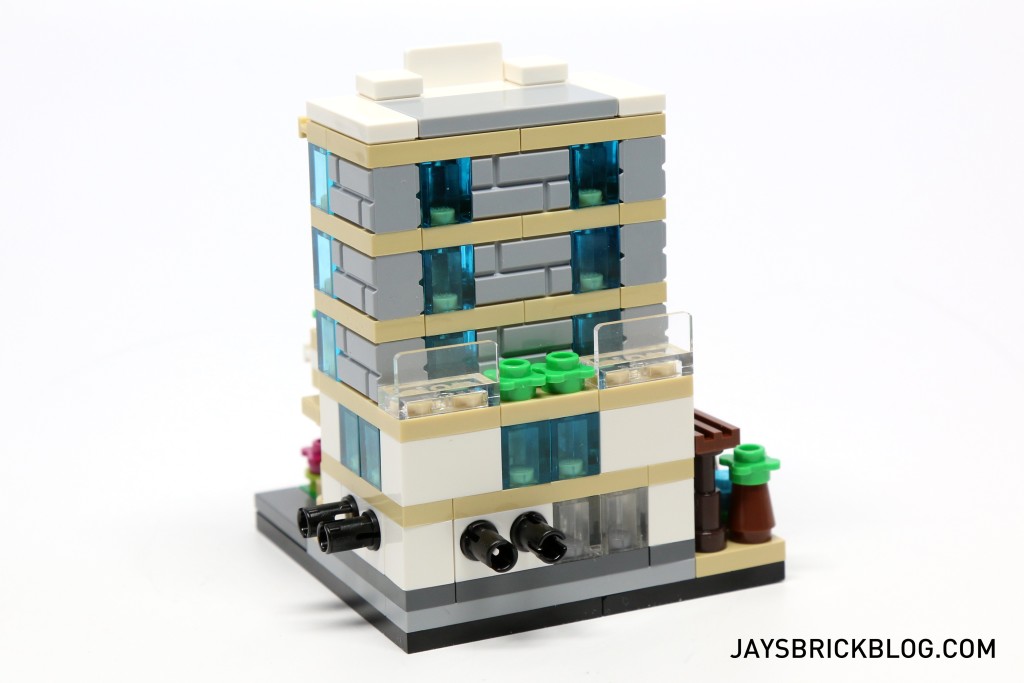 Here’s the view of the Bricktober Hotel from behind. 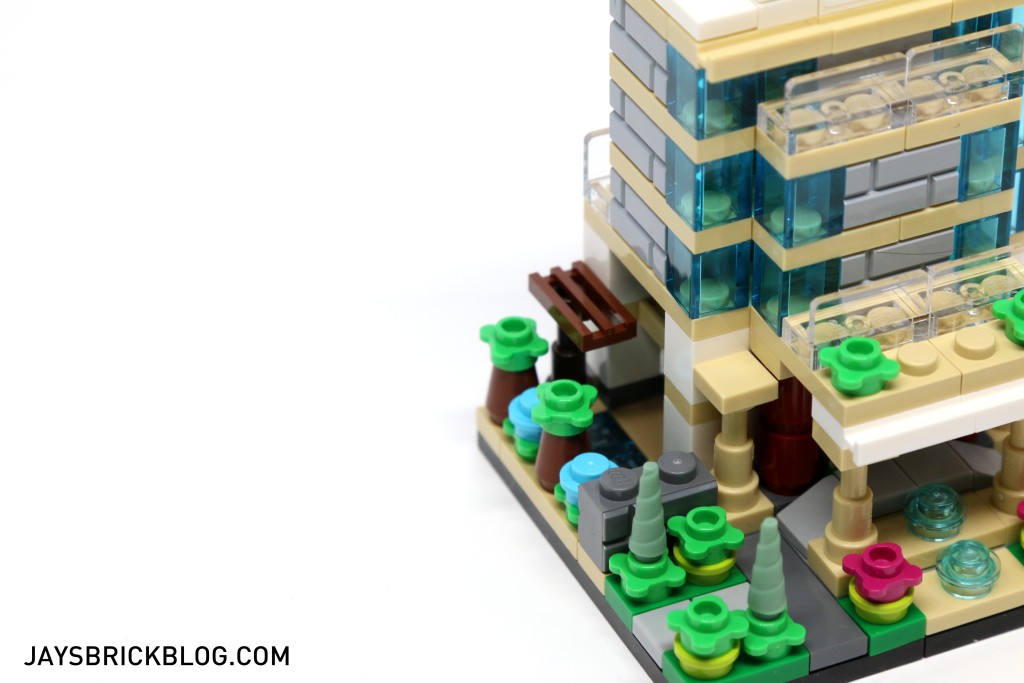 One of my favourite things about the Bricktober Hotel is the swimming pool area located at the side of the building. It comes complete with a shade and is a very clever use of space to give the hotel a huge sense of realism. The dark grey brick wall to give swimmers some privacy is also a very nice touch. 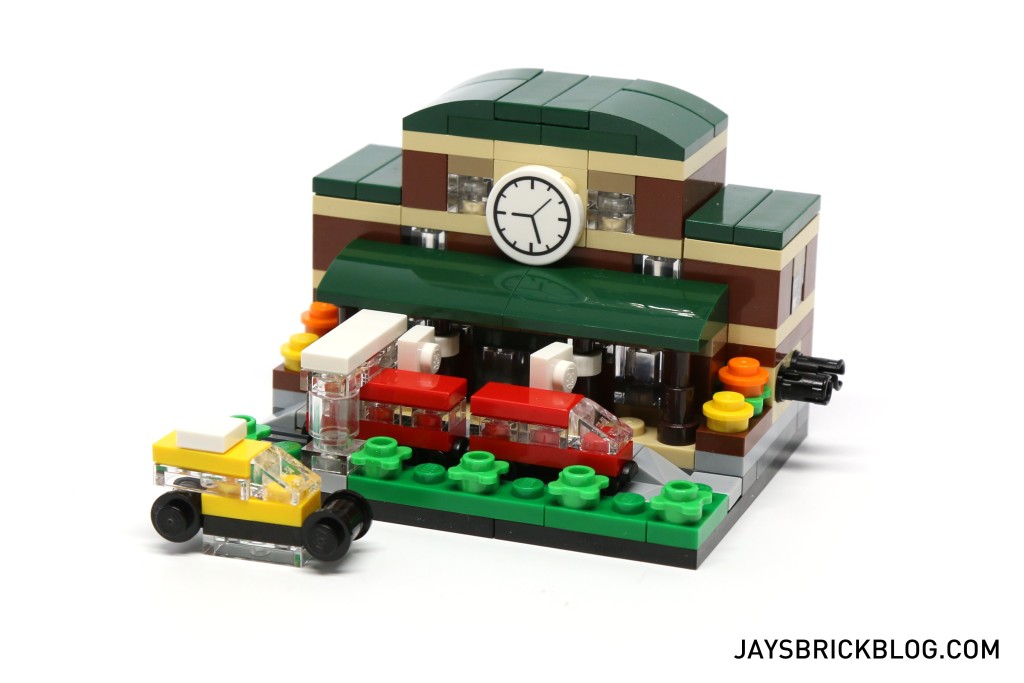 Week 2 gave us a very simple looking Train Station. The huge clock makes it look like a school and the overall layout is slightly questionable since train tracks are usually hidden behind any train station facade, but hey, for the sake of aesthetics and displayability, it kinda works.

I really like the colours used – the combination of dark green slopes and tiles for the roof with the brown and tan highlights gives off a very classic, old-world vibe to the train station – quite fitting for one of the world’s oldest forms of transportation.

For vehicles, we get a train (duh) and a very cool looking taxi. 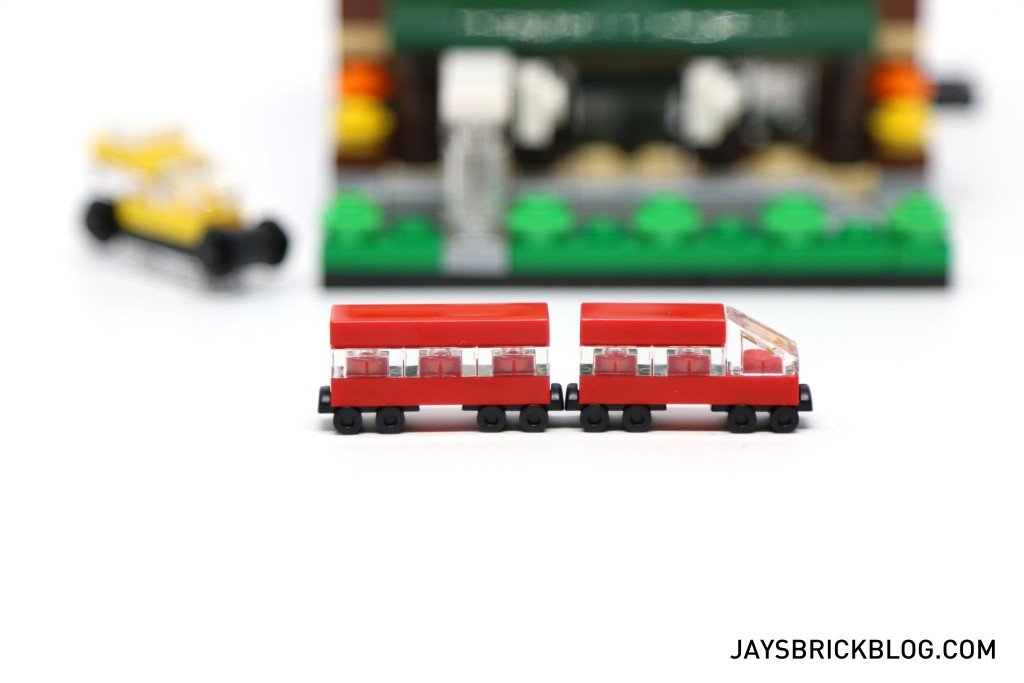 The train’s design is by far my favourite thing about the entire model. The ingenious use of skates that we often see on minifigure feet for the wheels and coupling is nothing short of brilliant. 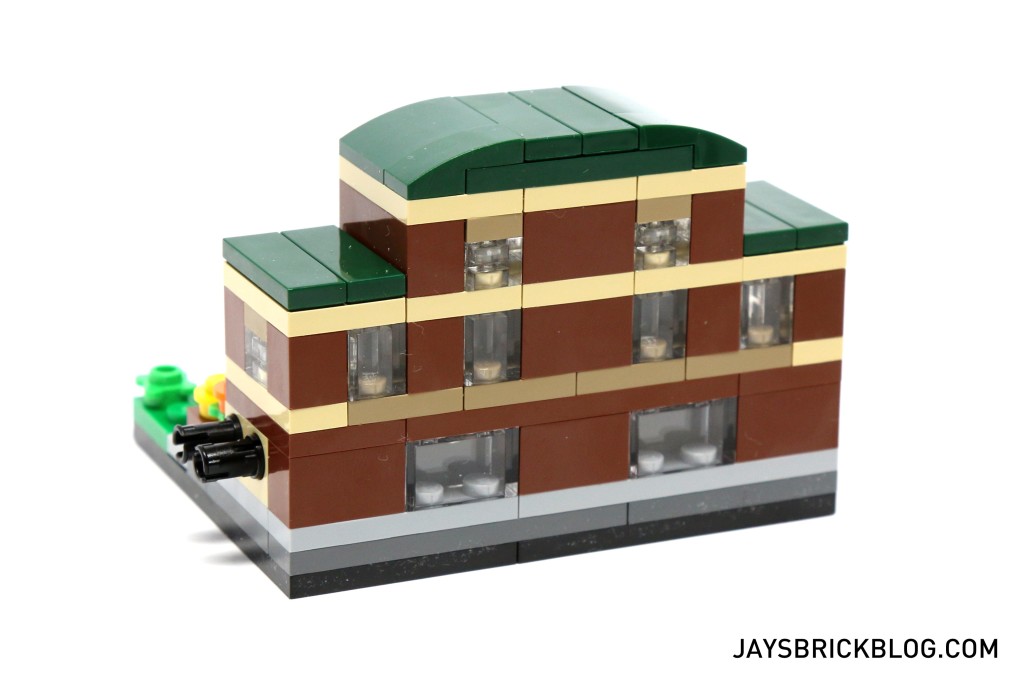 The back of the Train Station is fairly plain with the transparent bricks representing windows. 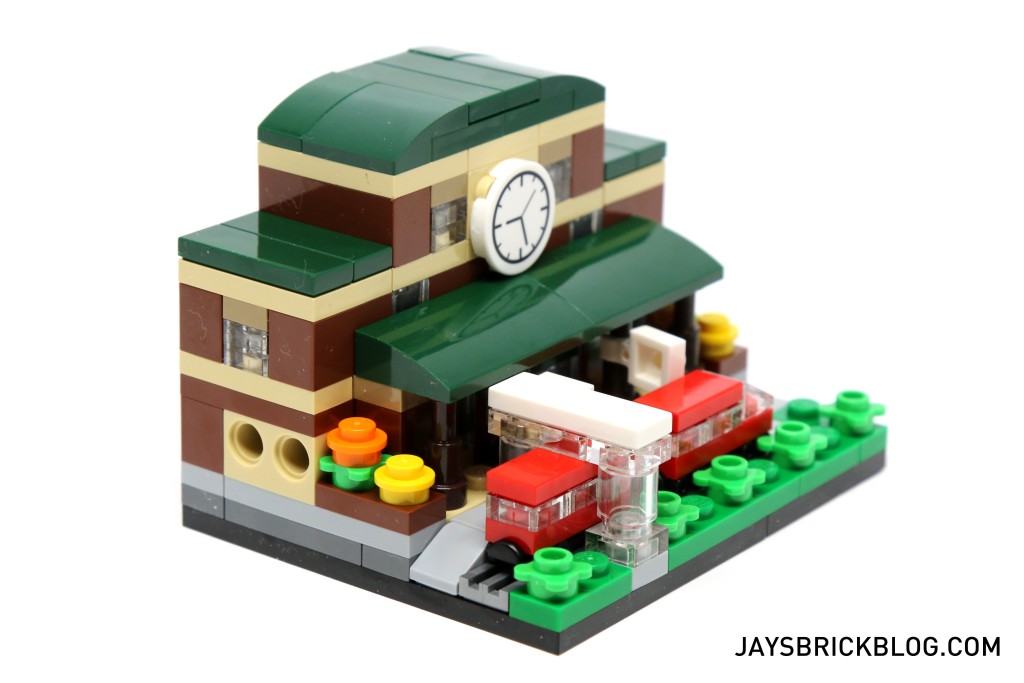 Unfortunately, most of the platform is obstructed by the train and there’s also a short length of railway tracks – yes, the train slides along quite nicely along the grills. 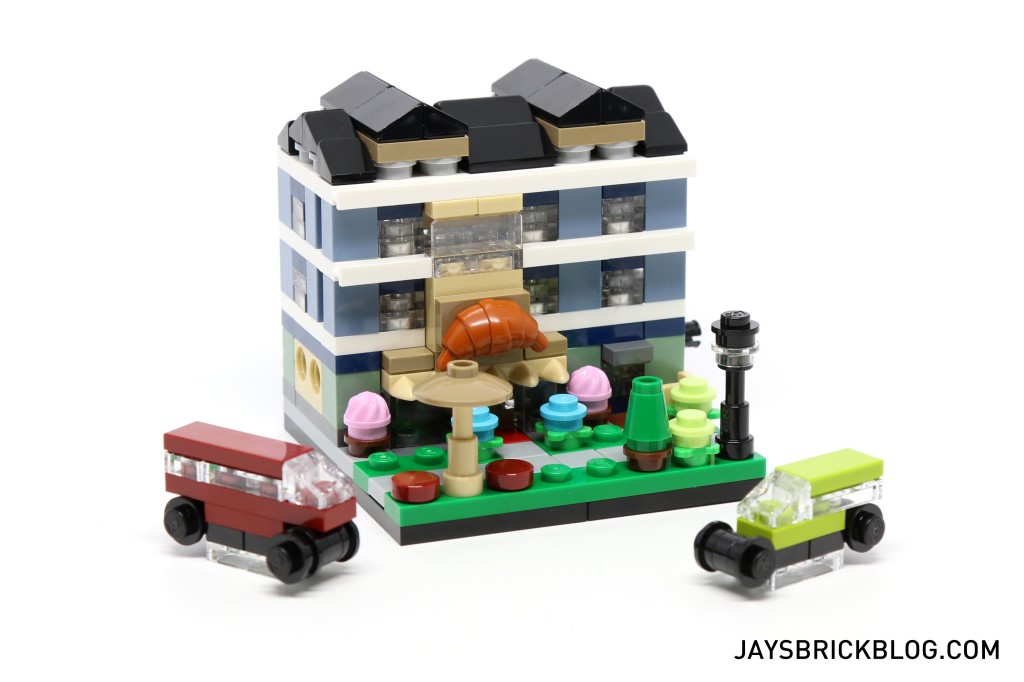 The Bricktober Bakery is by far the oddest building out of this year’s collection. Mainly because it doesn’t really look like a bakery. More like a factory or an apartment building. Sure there is a large croissant stuck to the building’s exterior but if it weren’t for that, the slightly drab colours and huge building doesn’t really scream bakery to me.

Maybe if they had called this a Bread Factory, it would’ve made a little more sense. I guess it’s cause I usually associate bakeries with small intimate shops – not 3 story structures!

The bakery comes with a dark red lorry and a sporty green car. 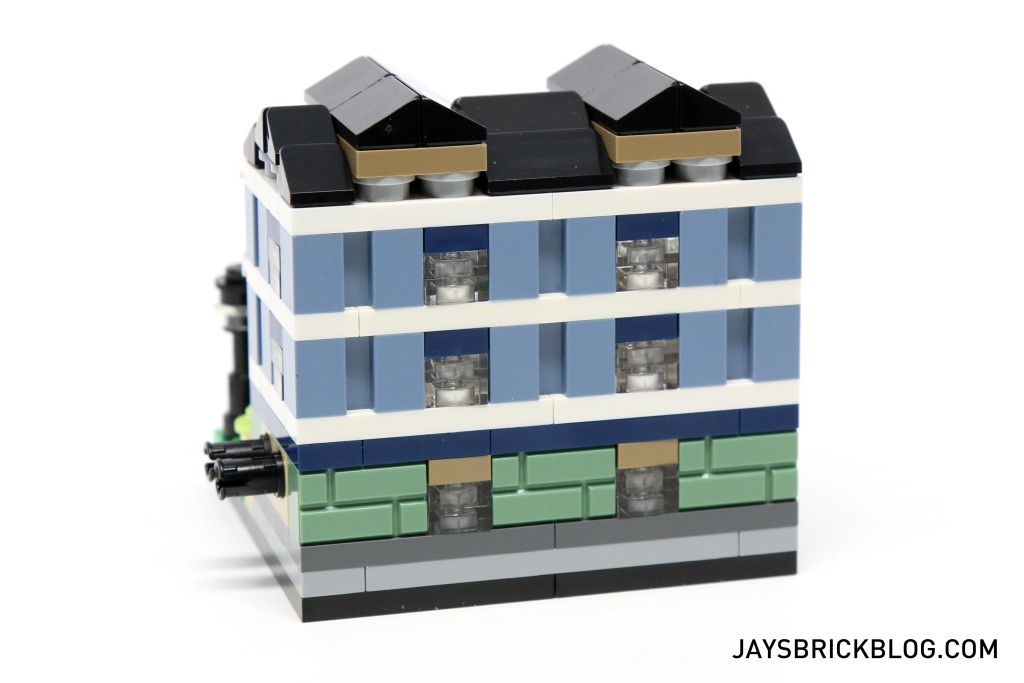 From behind, you get a look at the monolithic structure. There are tons of great parts like the sand blue bricks with the ridge between them and also sand green masonry bricks! ?  I almost feel like cannibalising the Bakery for parts immediately. 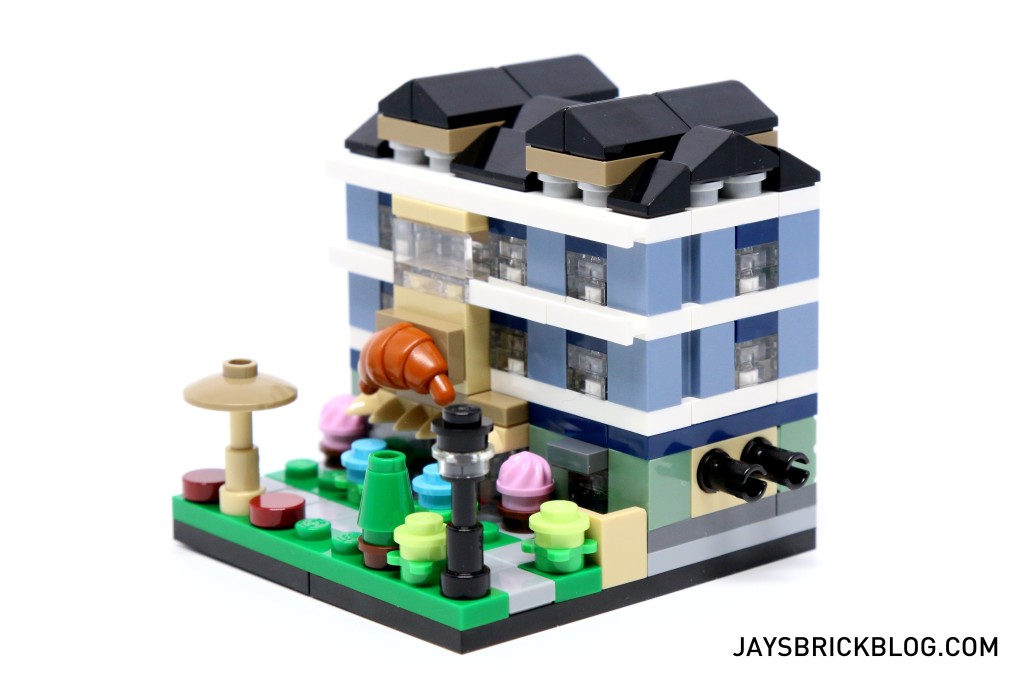 The Bricktober Bakery does have some interesting exterior details such as a table under the umbrellas outside, the aforementioned giant Croissant sign and two cake swirly thingies that flank the entrance. 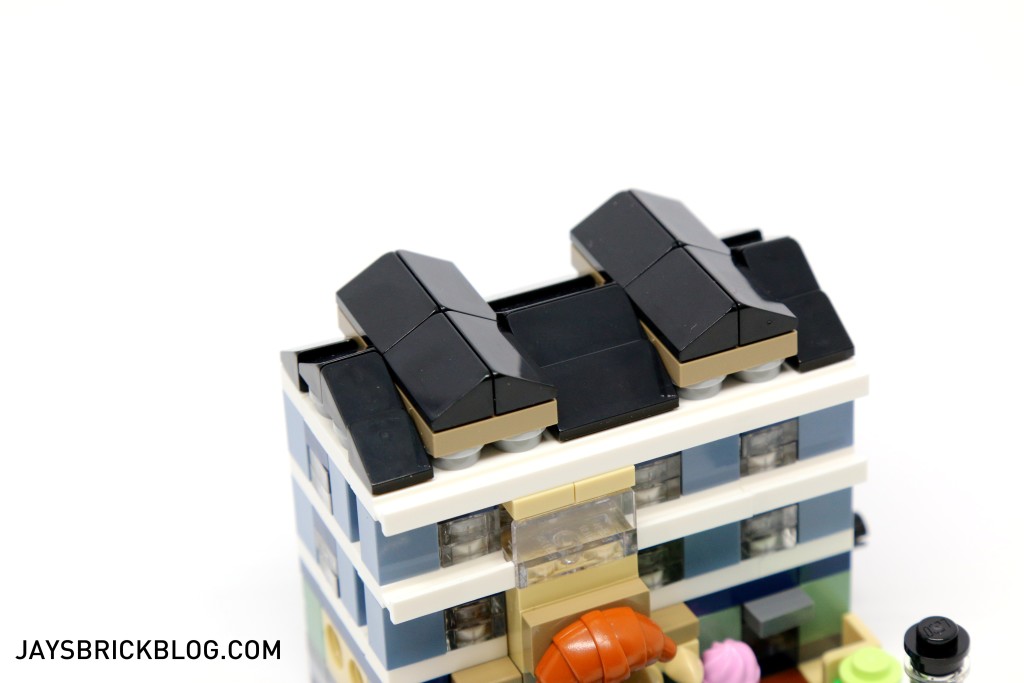 The roof is also slightly peculiar. I don’t know why but it gives off a very “prison” vibe to me.

The Bricktober Bakery is by far the weakest link in this year’s mini modular street but hey, at least you get plenty of sand blue elements! 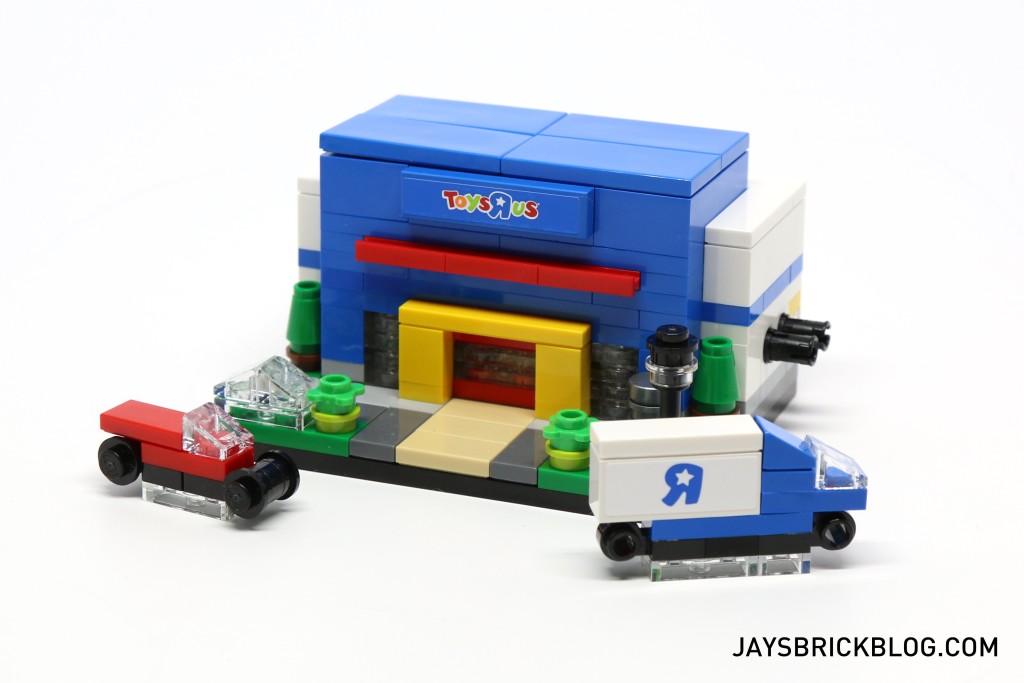 The Bricktober Toys R Us Store is the final and most interesting structure, namely because its based on a real world brand – something that doesn’t happen very often in LEGO! In fact, it’s been about 5 years since LEGO released the Toys R Us Truck, so this is quite a special model.

The Toys R Us Store bears the toy retailer’s signature blue colour which envelopes most of the structure and employs the use of bright contrasting reds and yellows to give the building some colourful detail.

For vehicles,we get a speedy red roadster and a miniature Toys R Us truck! 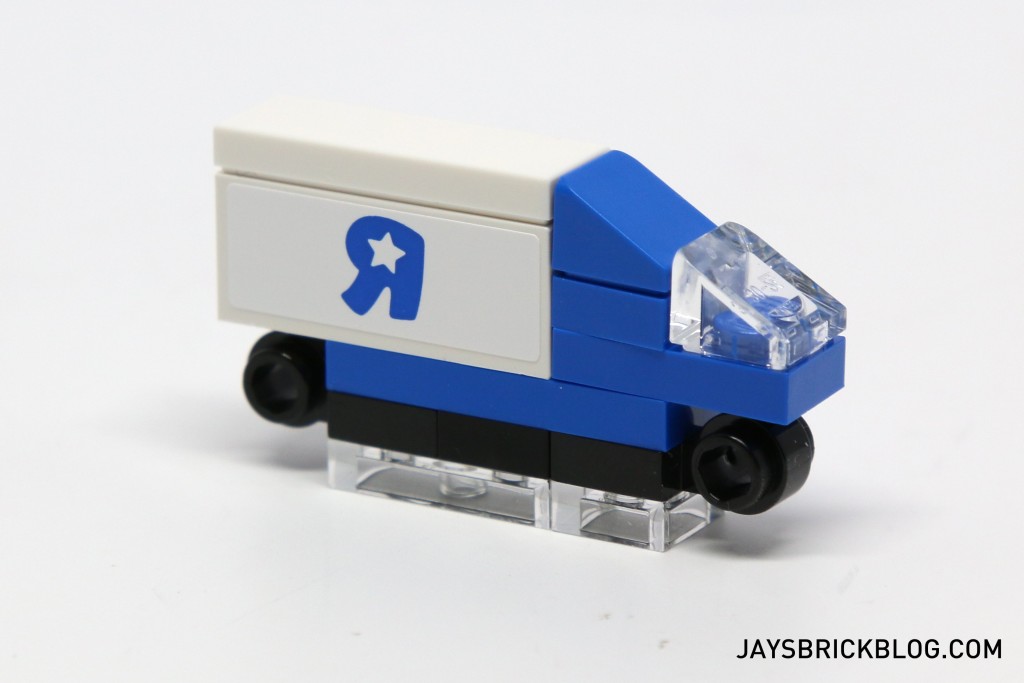 Unfortunately, all the Toys R Us branding is achieved through stickers which slightly dampens the overall experience but it doesn’t spell the end of the world. Please forgive me, I forgot to fasten on the truck’s wheels when I took this photo. 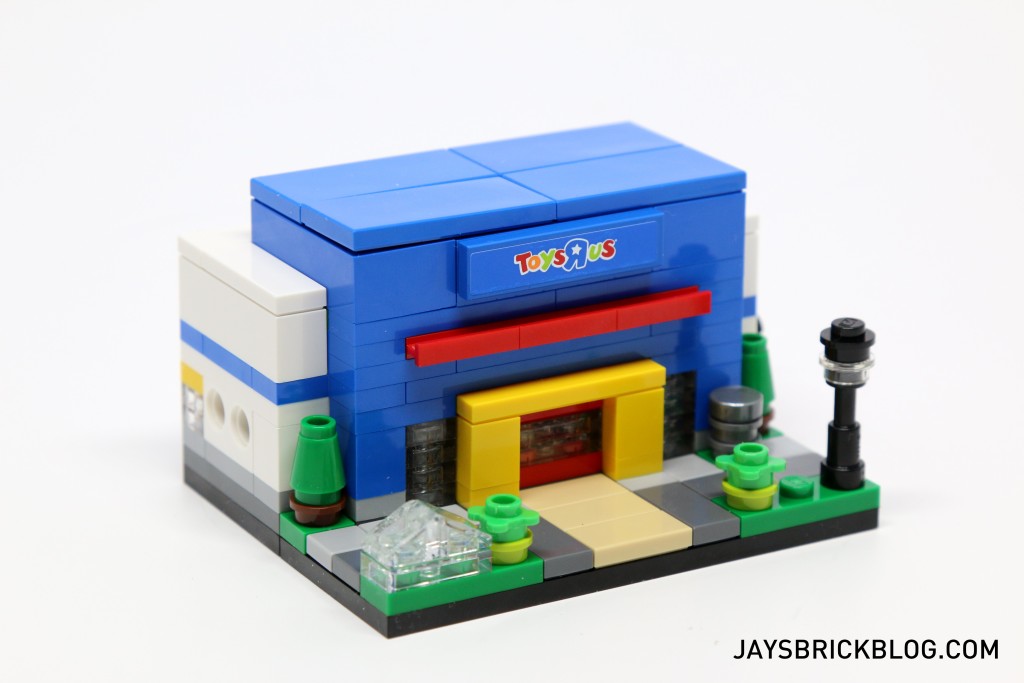 I don’t believe we have any standalone Toys R Us stores here in Australia, so the design probably makes more sense to Americans but I quite like the blocky facade of the store. Of note is the wonderfully designed archway that covers the entrance and the tiles that form a path towards the store. 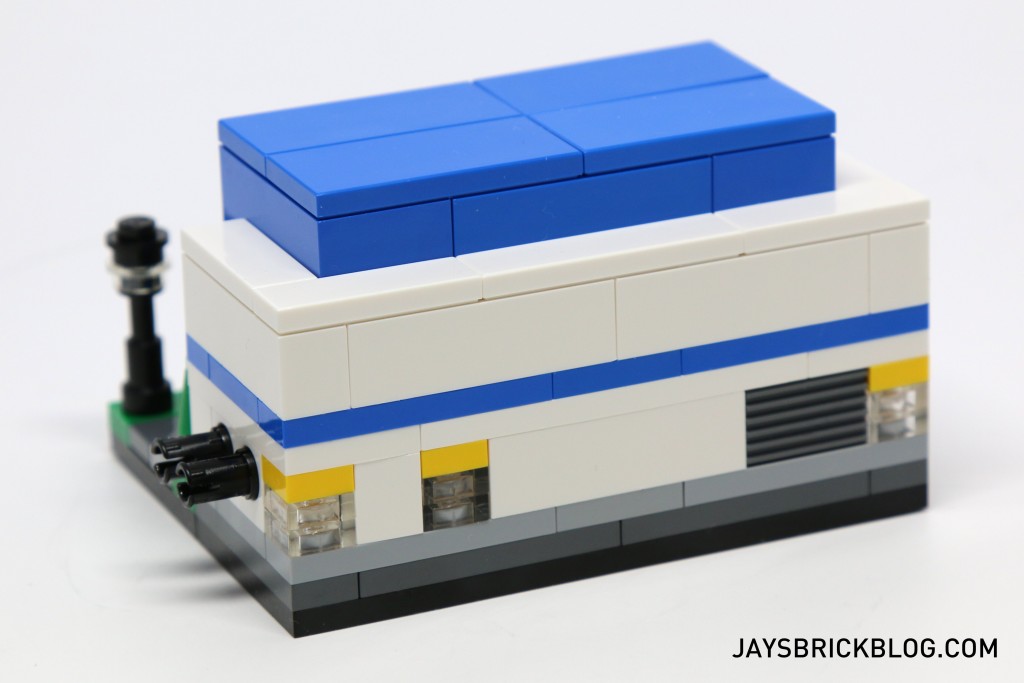 The back is pretty plain but it has some realistic details like windows and even a shutter door at the back to receive deliveries!

Here’s a look at all four Bricktober 2015 sets, attached to one another to create a street of mini modular buildings. The Train Station is by far the oddest since the train tracks start and end abruptly at is borders but apart from that, it kinda looks like a believable commercial street.

The Toys R Us Store and Hotel are two of my favourites and its certainly most apparent when you line them all up together.

So how do they look like when combined with 2014’s Bricktober sets? 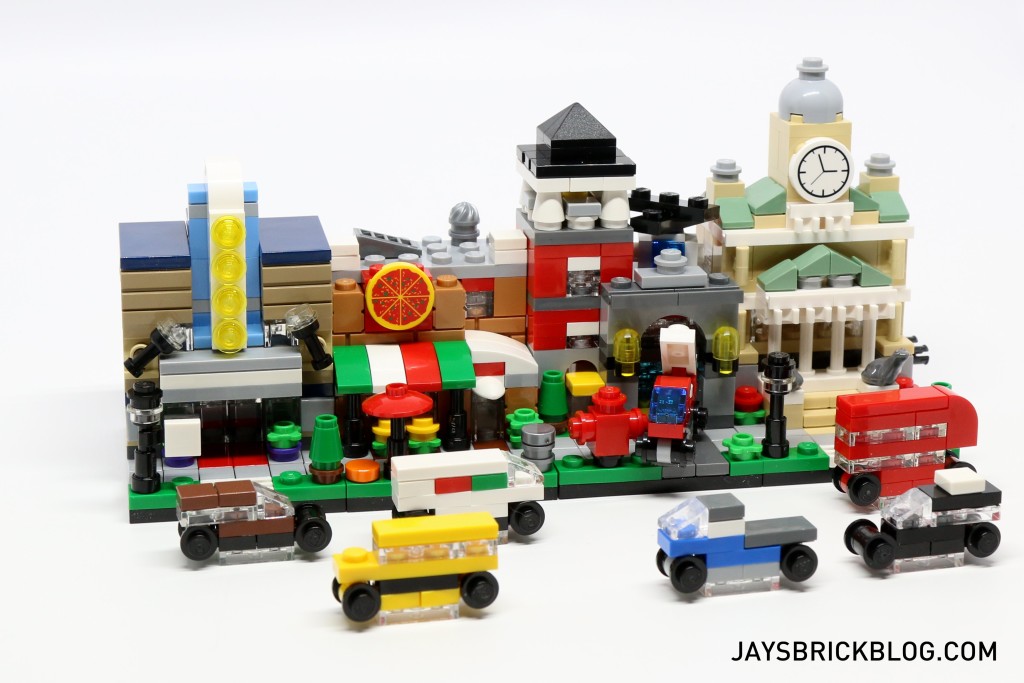 To refresh your memory, here’s what all four of 2014’s Bricktober sets look like. 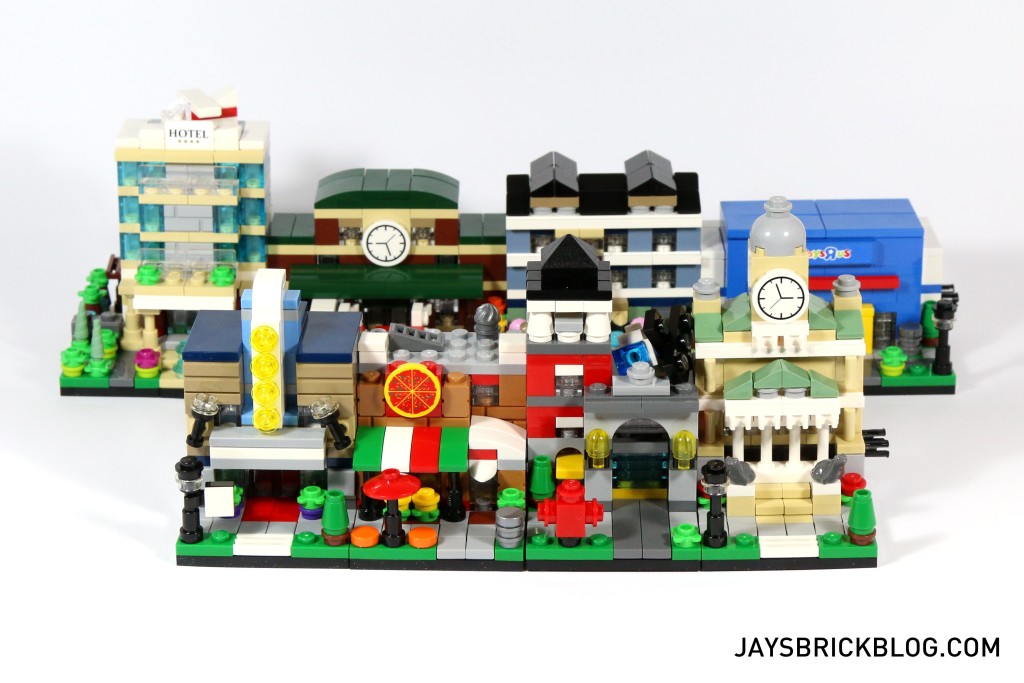 As I mentioned earlier, 2015’s Bricktober sets are much wider, taller and generally larger compared to last year’s. Not sure if I’m a fan of the new dimensions as it makes the buildings look a bit too large.

Sure you can pack in more design details but there’s just something to be said about the smaller, almost squarish mini modulars for 2014. Not sure if its the building choices but 2014’s buildings seem to contain a lot more charm and personality. 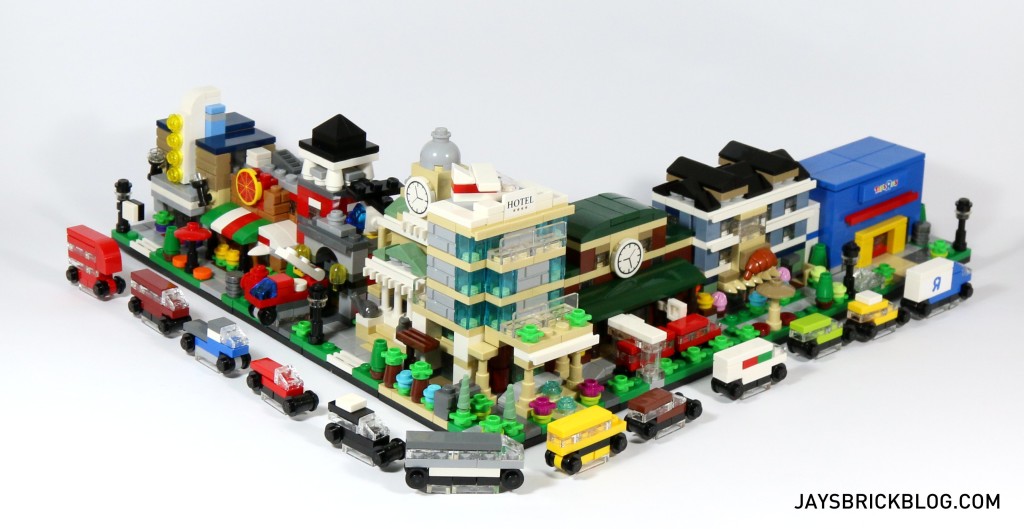 You have plenty of options on how to connect 2014 and 2015’s modulars. I opted for a corner street setup instead of an extremely long street as it looks a bit more compact that way. You can also face both of them against each other which also looks quite nice.

Final Thoughts: I’ve always been a huge fan of miniature and micro builds, so the Toys R Us Bricktober sets will always occupy a special place in my heart. They look fantastic on display and are quite practical since they don’t take up much space.

A lot of focus is usually on the buildings but I also have to say that I really like the miniature vehicles that accompany each building. They give each structure a sense of dynamic movement and they play a very integral role in building the warmth and charm of the mini modular buildings.

I don’t quite like the larger sized buildings this year – I think the scaling just feels a little off compared to last year’s. It’s hard to describe into words but it just doesn’t feel right that they’re so large. For me, 2014’s sets felt a lot more interesting due to the simple designs and they also felt less “busy”. The 2015 buildings tend to suffer from too many little details like excessive foliage.

That said, I still enjoyed building all of them even though I had to endure plenty of teeny tiny elements! They look awesome on display and I have to admit, a small part of me derives great satisfaction from pushing the miniature cars along the miniature street.

Did you collect the 2015 Bricktober buildings? What are your thoughts on them? Were they worth the effort? Let me know in the comments!

LEGO has teased the proper return of The Lord of the Rings.... is that Rivendell I spy? We wants it, we needs it. Must have the preciouss... ... See MoreSee Less

LEGO has dropped what it likely going to be one of the most incredible product reveals ever, with a sneaky teaser for an upcoming Lord of the Rings set. A short clip has been posted on LEGO’s social...
View on Facebook
· Share

LEGO Power Rankings are back for 2023 after a hiatus last year!Here are my Top 10 sets of the year so far, and interesting LEGO articles, features and videos from around the web! ... See MoreSee Less

A list of the top 10 LEGO sets of 2023, updated for January, and a recap of new LEGO set reviews, news & highlights from across the LEGO web.
View on Facebook
· Share

Happy Monday!Hope your day is going better than mine 😬 ... See MoreSee Less