Hello, hello, hello and welcome to Part 2 of my Series 10 review! Let’s get started!

First, a bit of an update regarding availability of Series 10 minifigs in Australia. I’ve been to a couple of Kmarts in Melbourne’s South Eastern suburbs and not a single bag was in sight. Either they’re cleaned out, or stock hasn’t arrived yet. If you’re still hunting these minifigs down, your best bet would be Target, Big W or Toyworlds for now.

For part 2, I’ll be weighing in on the Librarian, Bumblebee Girl, Sea Captain, Roman Commander and the Decorator!

Decorator “Is this the right purple? It looks a little off…” 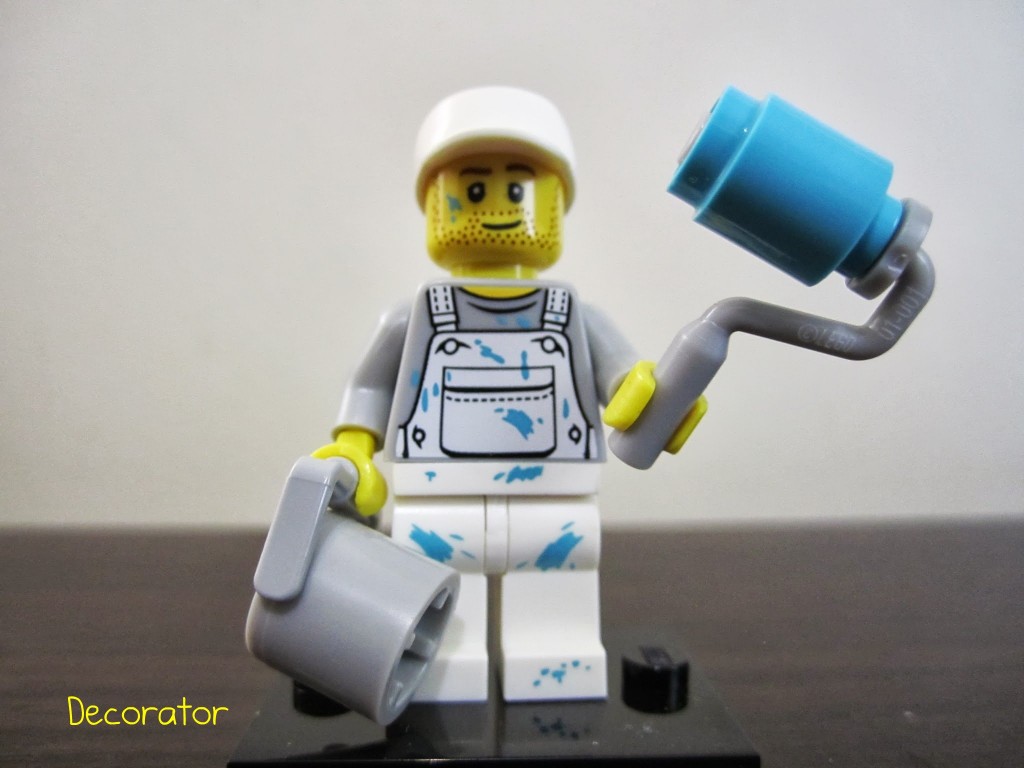 Lego takes on interior decorating with the Decorator… who really, should be called the Painter. I really like what Lego did with the Decorator as it does what the Collectible Minifigures does best, bringing to minifig form, characters that we see in the world around us or in pop culture.

To get the job done, he’s got a worker’s cap, roller brush, paint bucket and overalls so he doesn’t get so dirty! With a tired look on his face, and overalls splattered with paint, you know he’s done a good job. Here’s a closer look at his great outfit with paint all over it. 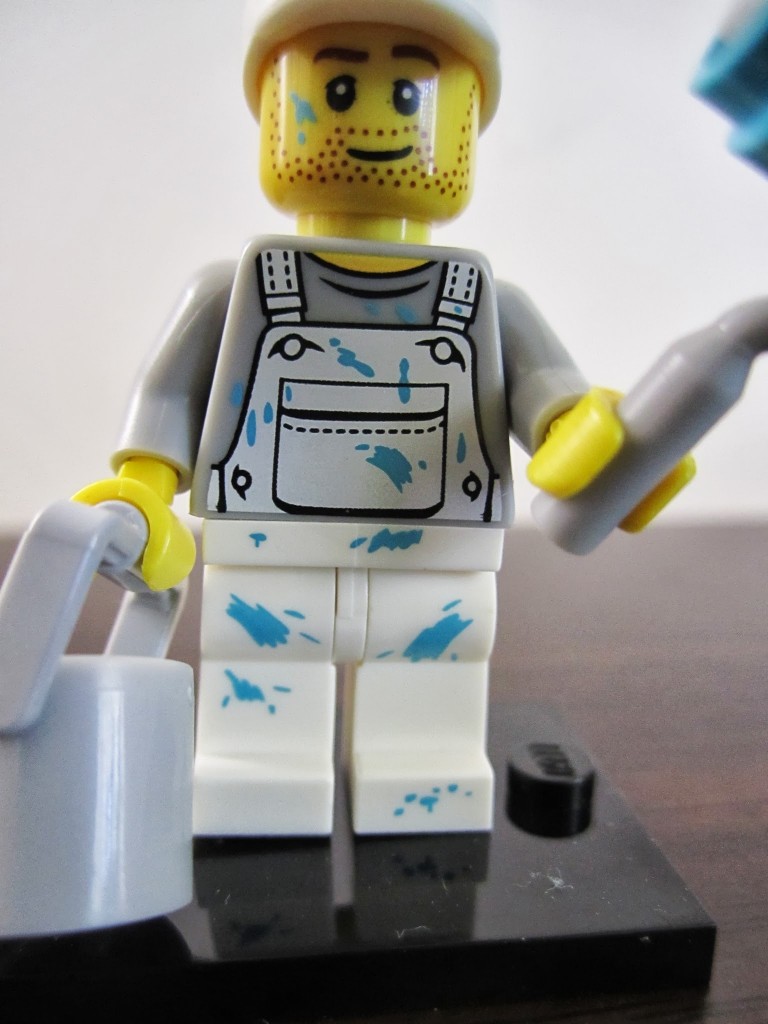 I have to say that I think the minifig that I got is a little defective, with the print on his face looking like it smudged a little during the manufacturing process. Anyway, the paint flecks on both the torso, legs and even some on his face is my favourite thing about the decorator. 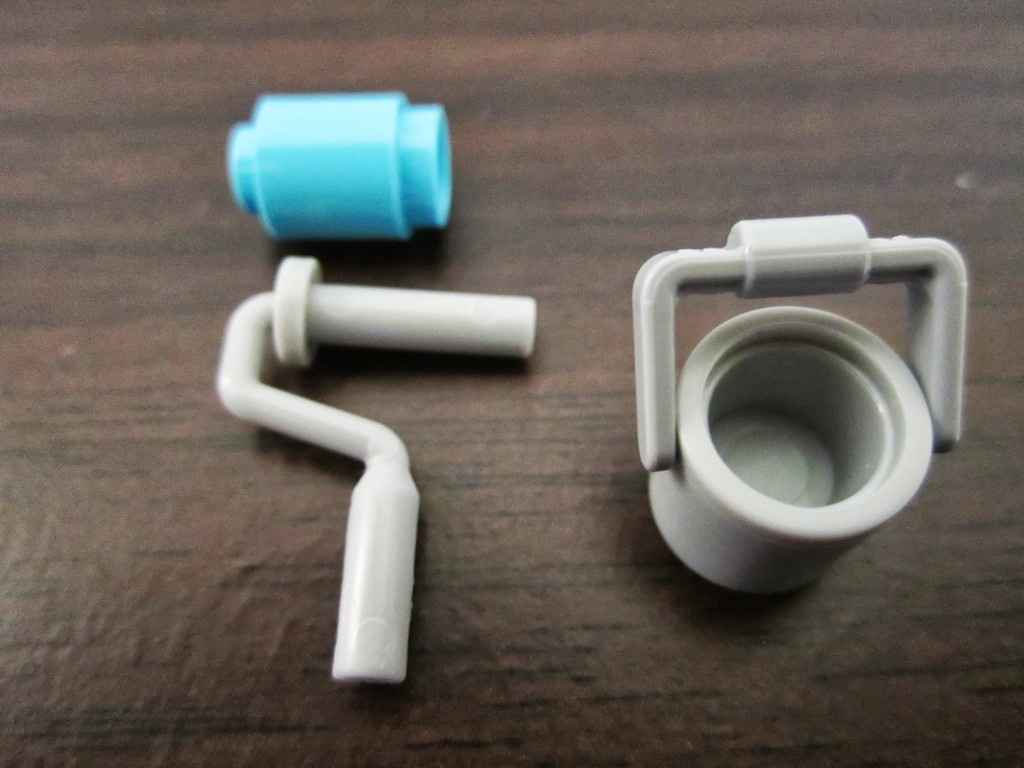 Here’s the decorator’s gear in a closeup. The roller brush is made out of a 1×1 round brick in light blue attached to the roller brush handle. The handle is made out of squishy rubbery plastic, which I’m not too happy about since it’s flimsy. The bucket on the other hand, is pretty neat as it’s a new mould.

The Decorator’s a solid minifigure to the lineup. Not a blockbuster standout, but not an uninspiring character either.

How To Find One: The roller brush thingy is easy to feel out because it’s pretty bendy. You can also try looking for the bucket or the 1×1 cylindrical piece. 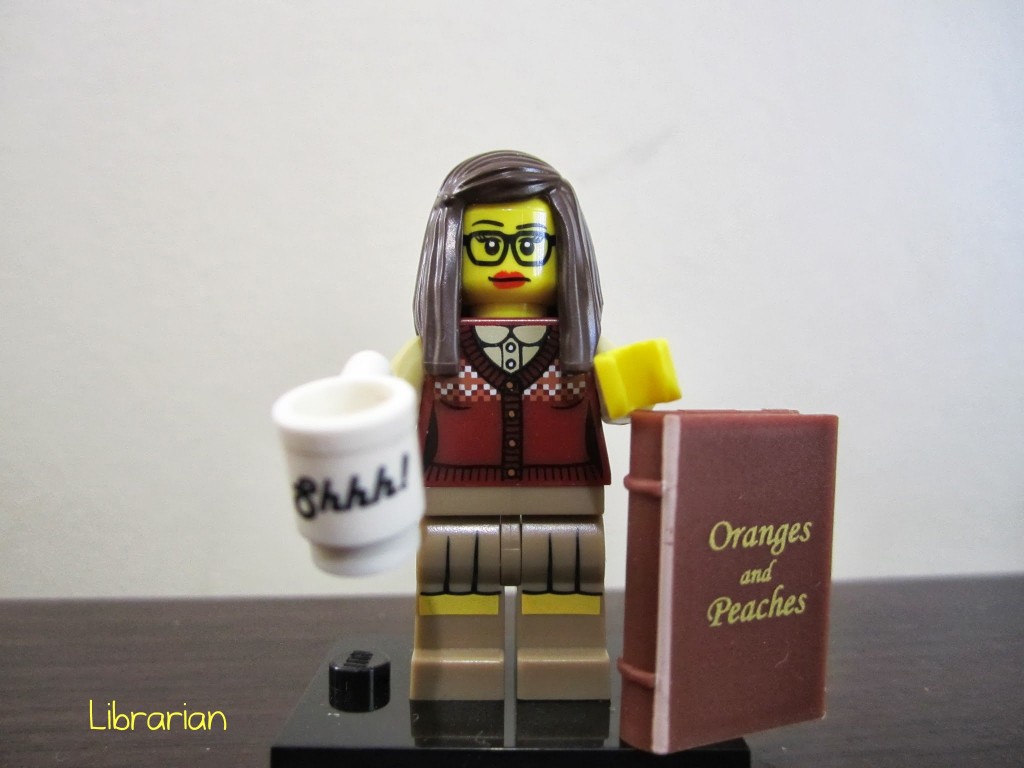 Here’s Lego literally silencing the naysayers who have been complaining that the Collectible Minifigs have been running out of characters with the Librarian! Hipster or custodian of books? You can’t really tell! Decked out with nerd glasses, a stern yet warm face and that wonderful preppy apparel, the Librarian hits all the right notes. 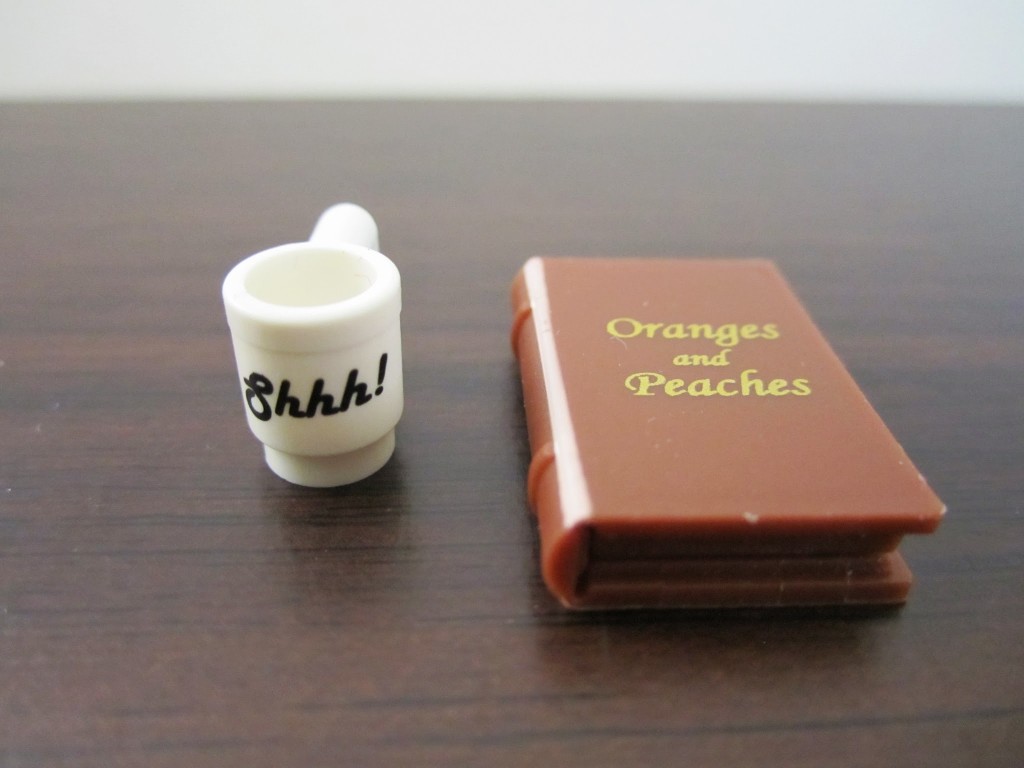 I like these ‘novelty’ mugs that Lego are coming up with. Last seen with Series 7’s Computer Programmer who had his own C:/ cup, the Librarian has a very fitting Shh… cup. She also comes with a book (of course) entitled Oranges and Peaches. No idea what that title is on about.. 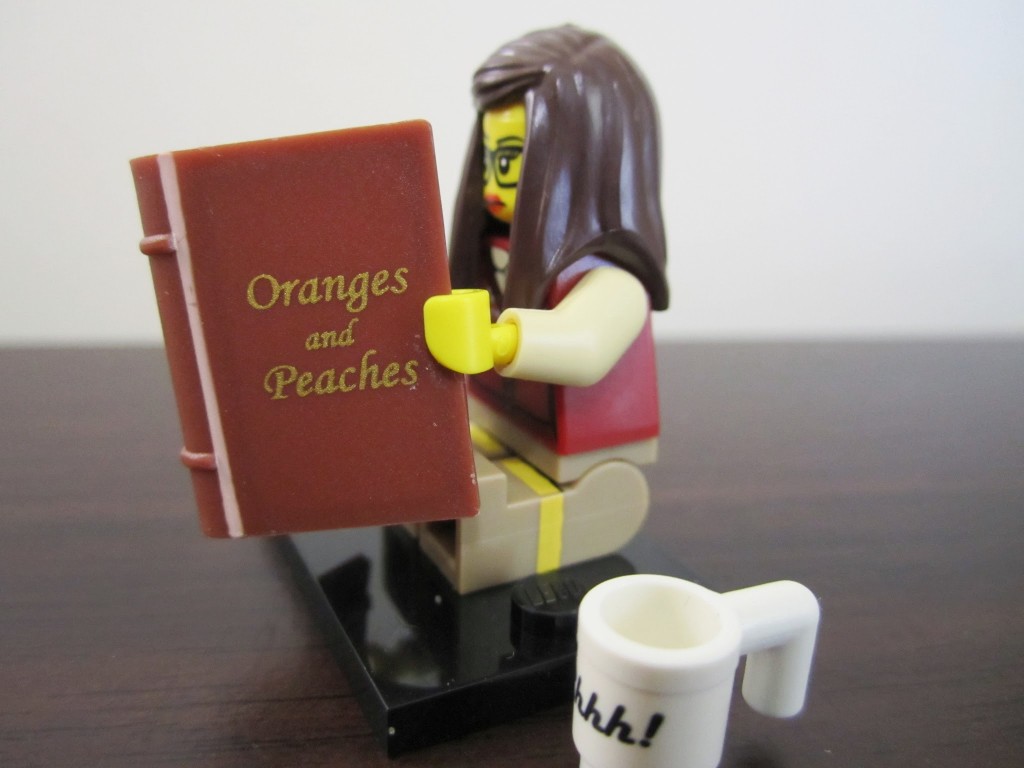 Here’s the Librarian doing what she loves best, burying herself in a book. Her hairpiece in brown is an added bonus because when it was first released on Ginny Weasley‘s minifig, it was widely praised to be one of the best looking female hairpieces in Lego history. 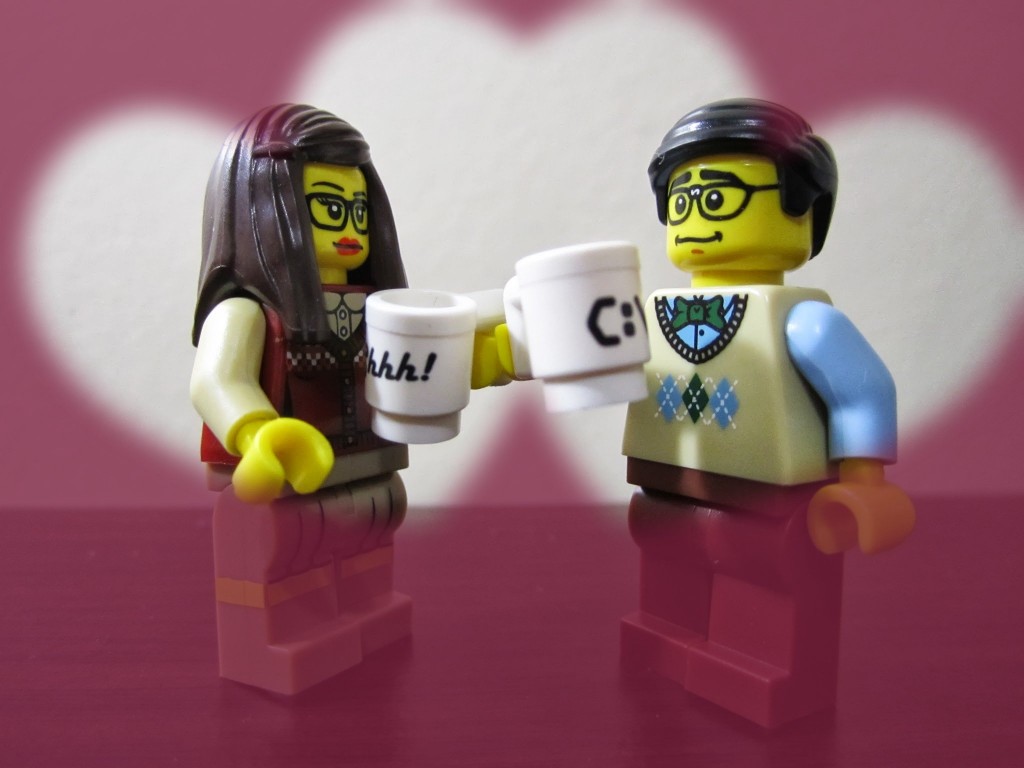 Ah, the Computer Programmer has finally found love! Aren’t these two wallflowers the cutest with their matching spectacles, knitwear and mugs?

How To Find One: The book is your best bet for the librarian. It’s pretty chunky although you have to be a little careful and not confuse it with the minifig’s base plate. Alternatively, you can also try looking for the cup, but make sure you verify that it’s not the Grandpa, as he has a mug as well. You can differentiate her from Grandpa using her hairpiece, which is quite large as well.

Roman Commander “For the glory of Rome!” 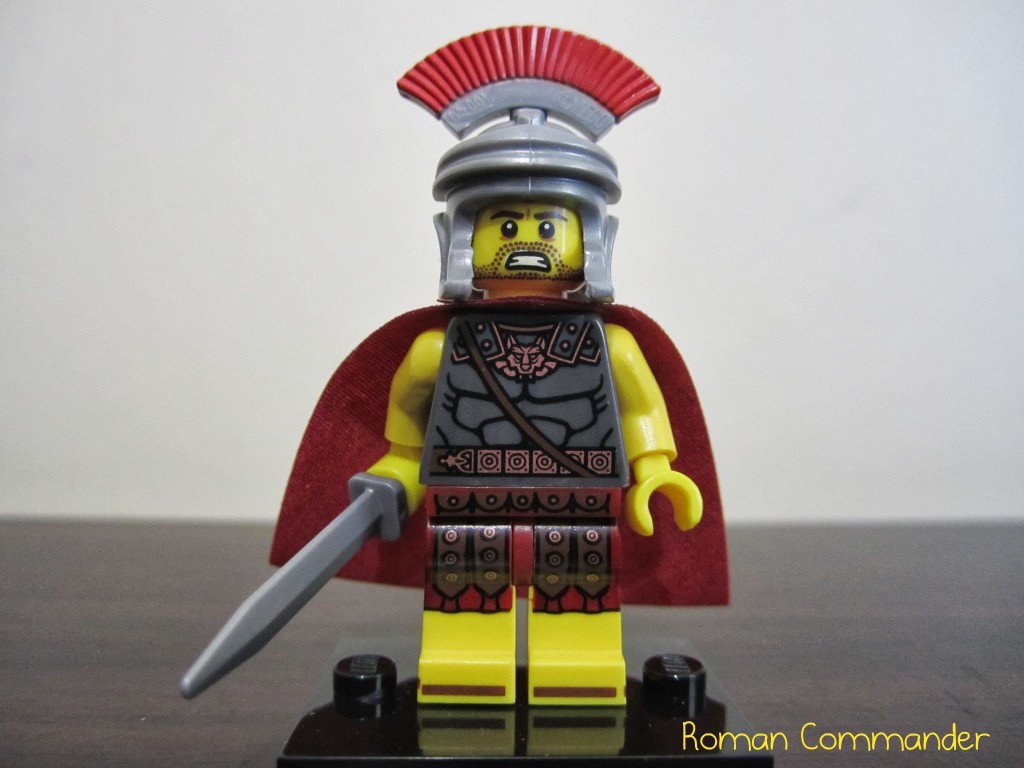 After the immense popularity of Series 6’s Roman Soldier, it isn’t really surprising that Lego has finally released a Commander for the Roman Legion!  Unlike the rare Roman Soldier, which were only allocated 3 to a box, the Roman Commander appears to be in no short supply, with each box containing 6 of them. I guess that’s a plus if you’re out to build an army of Romans.

The Roman Commander is equipped with a neat plumed helmet. The helmet and leg print is identical to Series 6’s Roman Soldier, which sorta makes sense since they belong to the same historical period. The plume on his helmet is detachable. 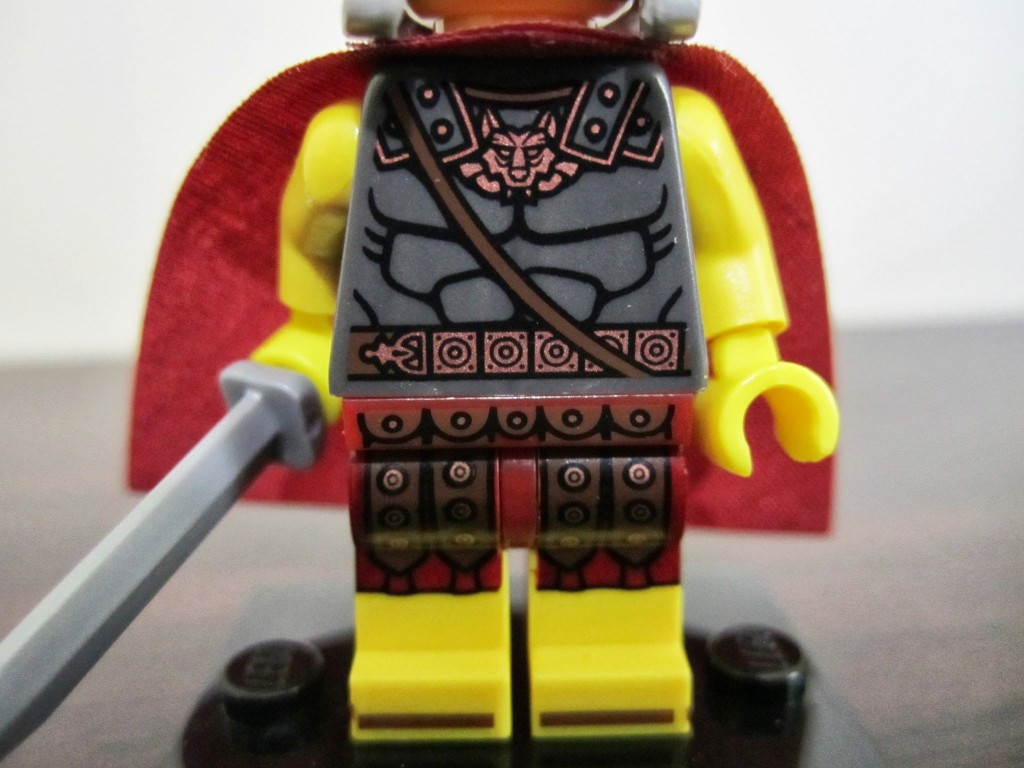 Here’s a closeup of his torso and leg print. They’ve upped the detailing compared to the Roman Soldier and the use of maroon, which perfectly matches his cape is a vast improvement. Also love that they retained the slippers. 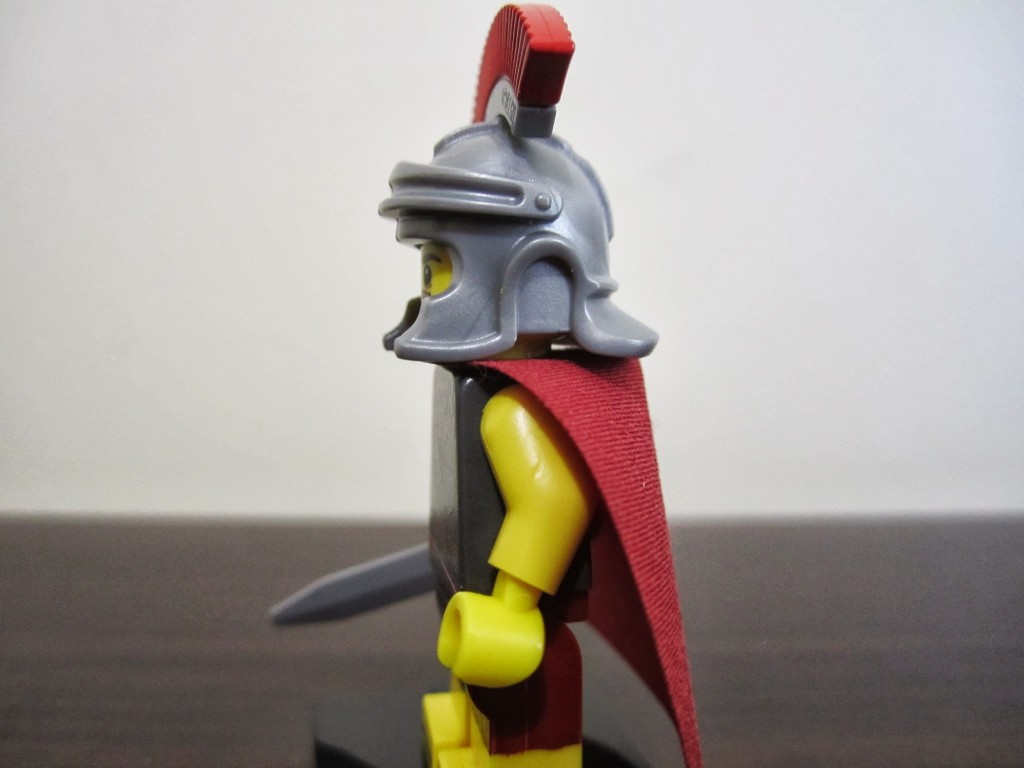 Side shot of the Roman Commander to give you a better look at his helmet. An extra accessory such as a shield would’ve been nice. Overall, it’s not a terribly impressive minifigure since they’ve pretty much done as much as they can with Roman characters. Out of all the historical minifigures we’ve been getting, I would really love a Mongolian Warrior with a falcon accessory. C’mon Lego, you can do better than this!

How To Find One: The Roman’s Helmet has a pretty distinctive shape, with the large opening in the front which is quite easy to feel out. If all else fails, look for his sword!

Sea Captain “Another Kraken? Let me know if you spot one with ten heads” 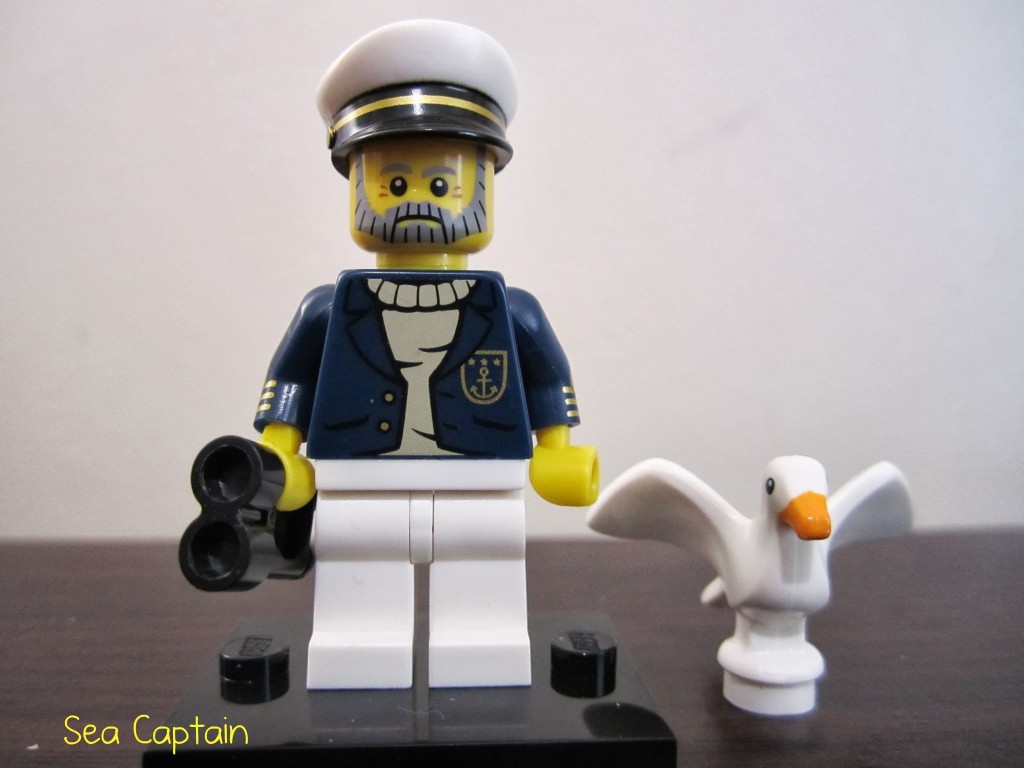 Ahoy there! The Sea Captain’s quite a charming nautical-themed minifig which should be a great addition if you have a fleet of ships or boats. He comes with a very cool captain’s hat and a seagull! I like the seagull, it’s a cool animal to have. Appreciate that Lego weren’t complacent with giving the captain just a pair of binoculars but decided to be generous and throw in a bird companion to keep our Captain company at sea. He’s dressed to his seafaring best in a navy blazer, with an anchor emblazoned on his breast, as well as trademark white slacks. Also, like all seasoned navigators of the oceans, the Sea Captain sports an impressive grey beard that just screams out experience and authority. 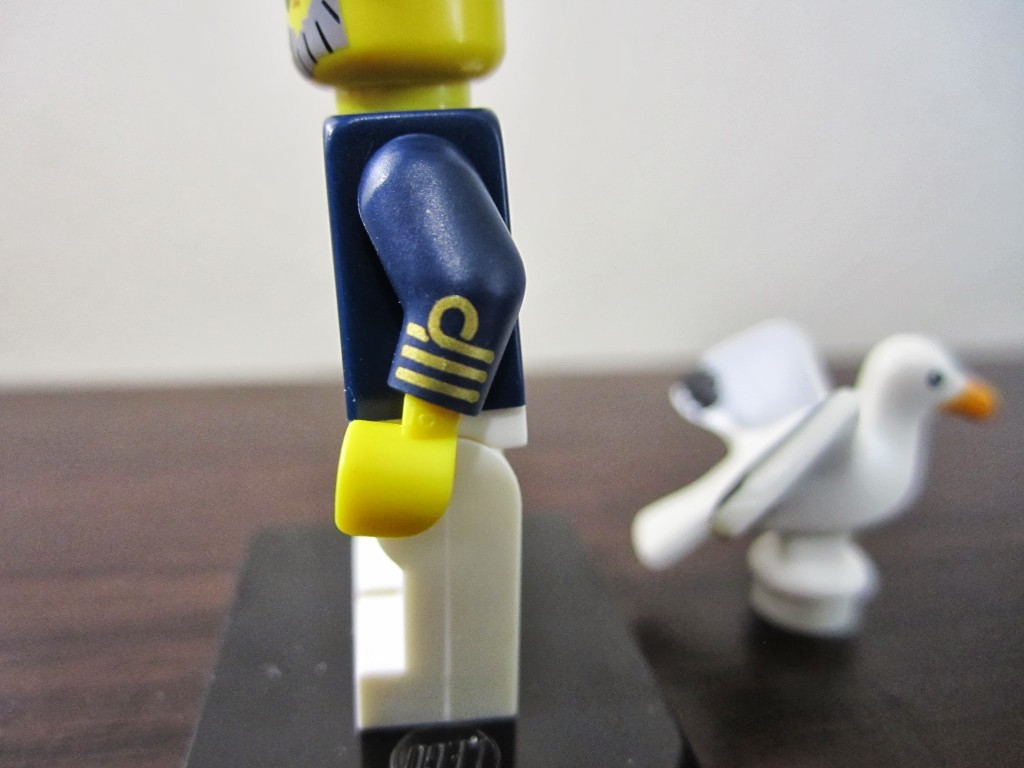 These beautiful cuffs that adorn both arms is icing on the cake, making Cap’n here look really sharp. 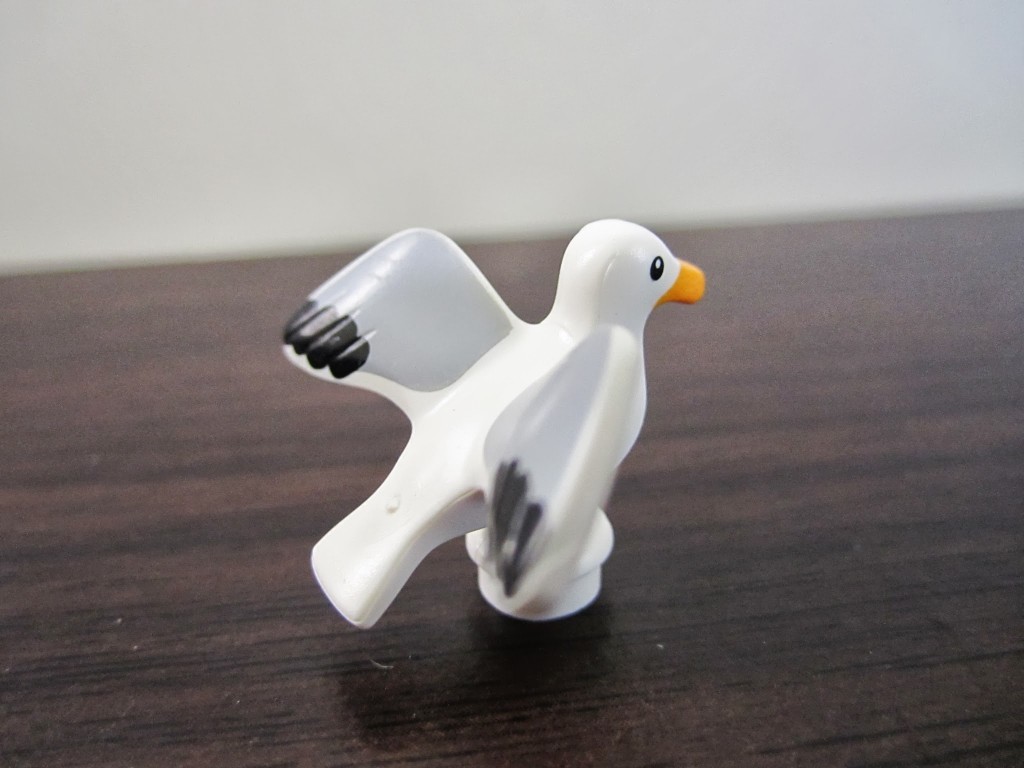 Here’s a closer look at Captain’s trusty seagull friend. Again, we see Lego using the rubbery plastic material which allows the seagull’s wings to bend. As always, I really would’ve preferred these unique elements to be made out of high quality regular Lego plastic. Mass producing these seagulls is practically a no brainer as they can be regular fixtures in City sets that feature boats, or even placed on buildings in cities. 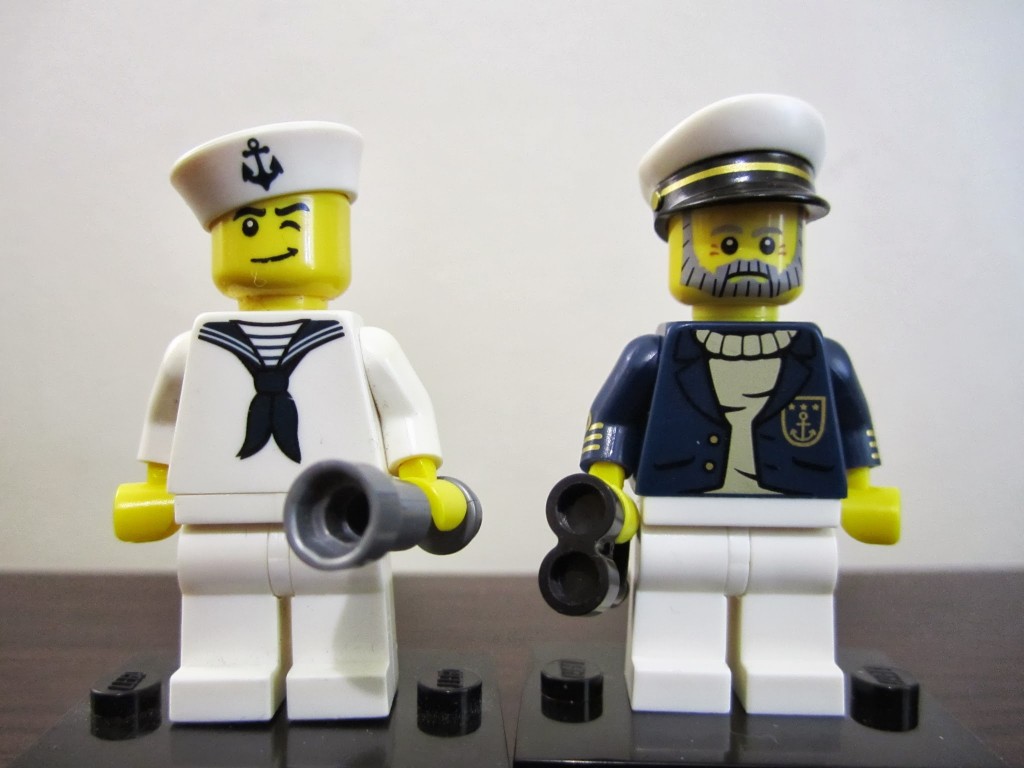 Series 4’s Sailor is finally reunited with his Captain! They look great together, duncha think?

How To Find One: The seagull is the most prominent part you can feel for. Remember that his wings are bendy. Due to its large shape, it’s quite easy to spot it. Alternatively, try feeling for his hat or the binoculars.The binos are small, but very distinct in its shape. 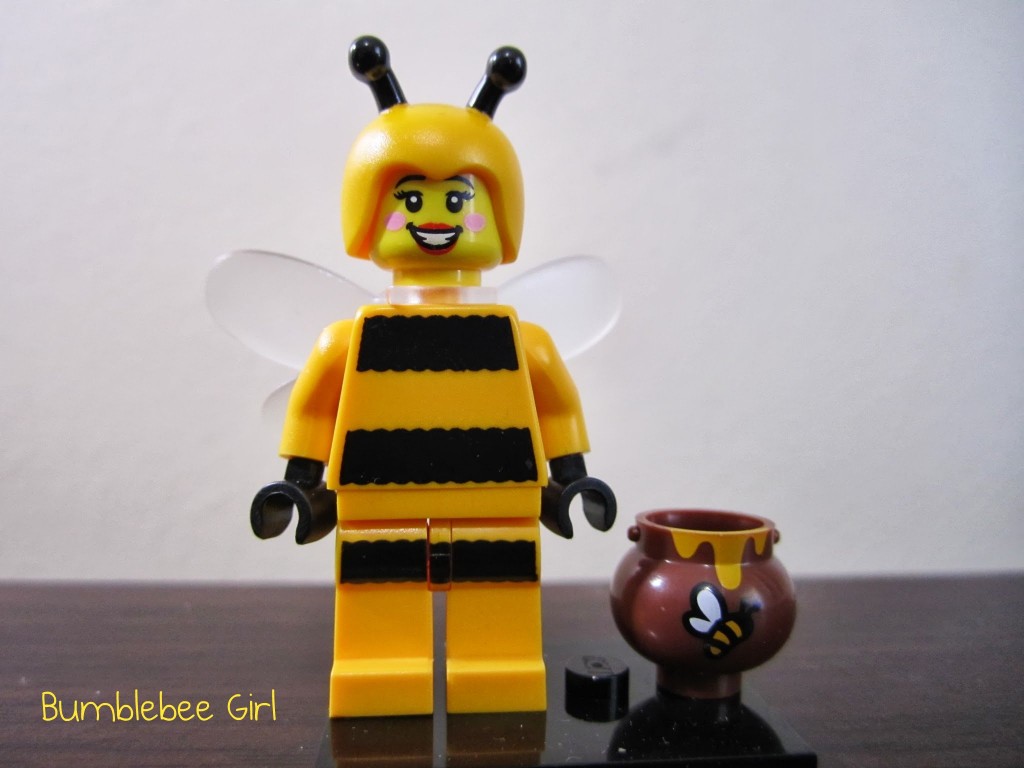 Taking the place of Lego minifigs in cutesy animal costumes in Series 10 is the super adorable Bumblebee Girl! Joining the ranks of previous alumni which include luminaries such as the Bunny Man, Gorilla Suit Guy and who can forget Series 9’s excellent Chicken Suit Man! The Bumblebee Girl is the first girl (as her name implies) into this exclusive club. Sporting a wide grin with bright pink cheeks, her facial expression is almost as sweet as honey!

She’s got a little “bee helmet” on, which again I must remark is made out of squishy plastic. Now, this is a huge throwback to the other members of this “animal collective” where all their accessories were made out of high quality plastic. I’m hugely disappointed that they had to compromise Ms. Bumblebee here. 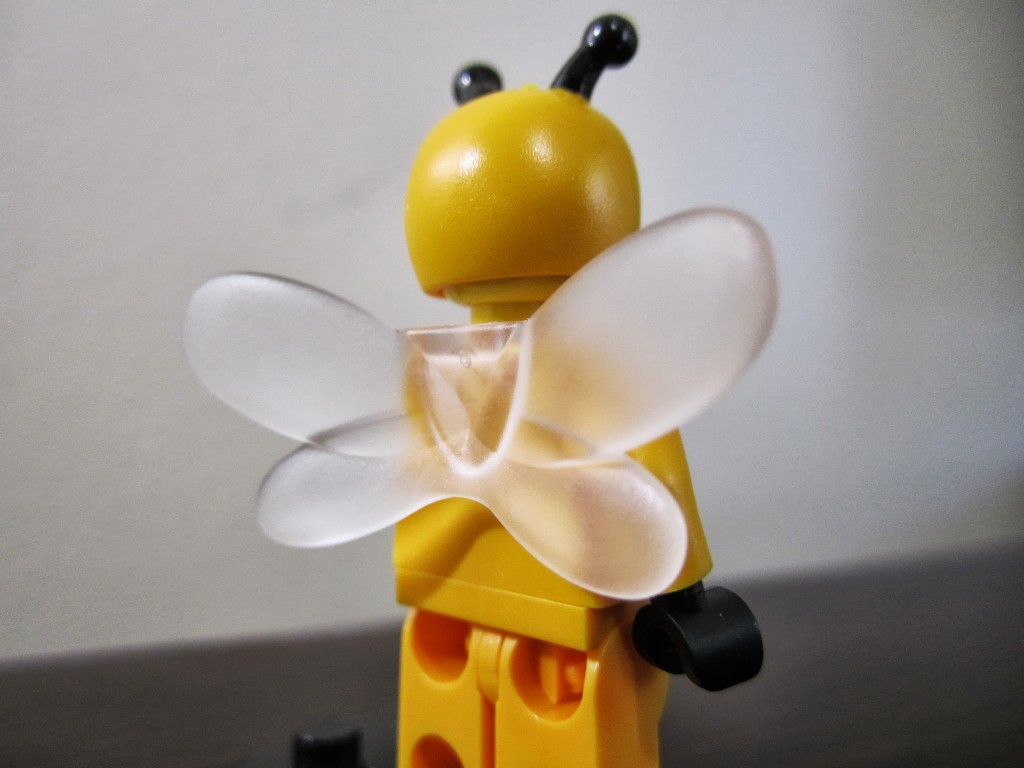 In the front-facing shot, her wings look kinda transparent, but from this angle you can clearly see the translucent nature of the wings. They’re attached to her neck in the way a regular Lego backpack would. Curiously enough… the wings are made of hard plastic. Lego perplexes me sometimes, with the choices they make. 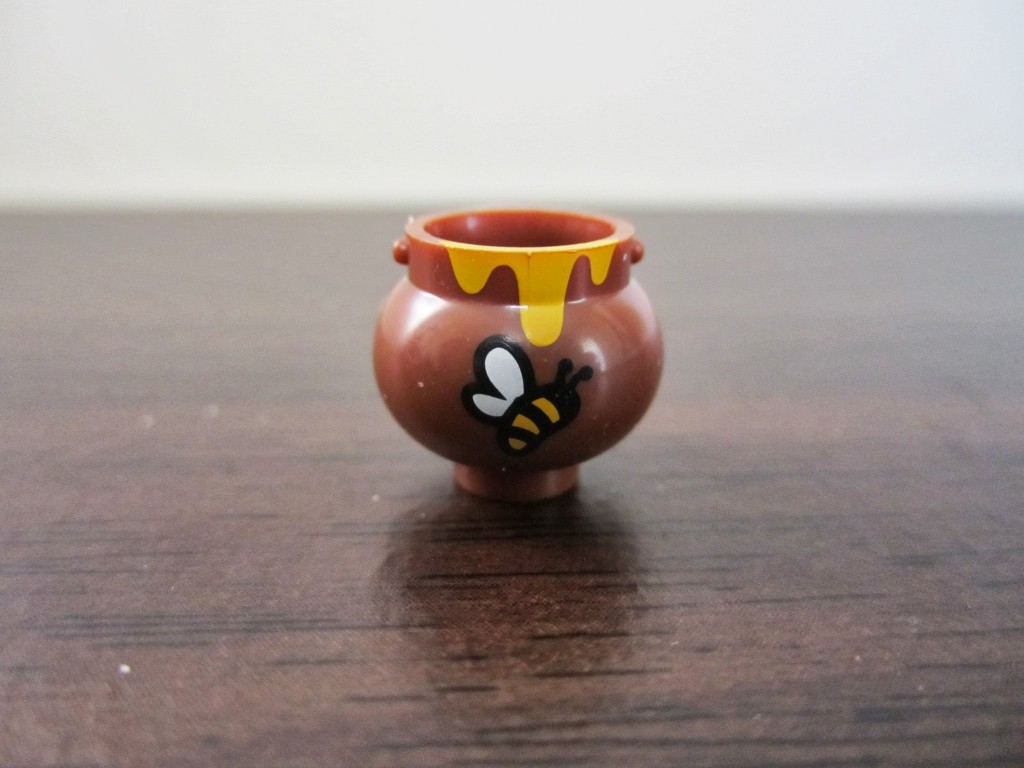 Her only accessory is this incredibly cute pot of honey with a little bee symbol illustrated on it! It’s also got some honey stains around the rim, which I guess is a testament to Ms Bumblebee’s hard work harvesting pollen. 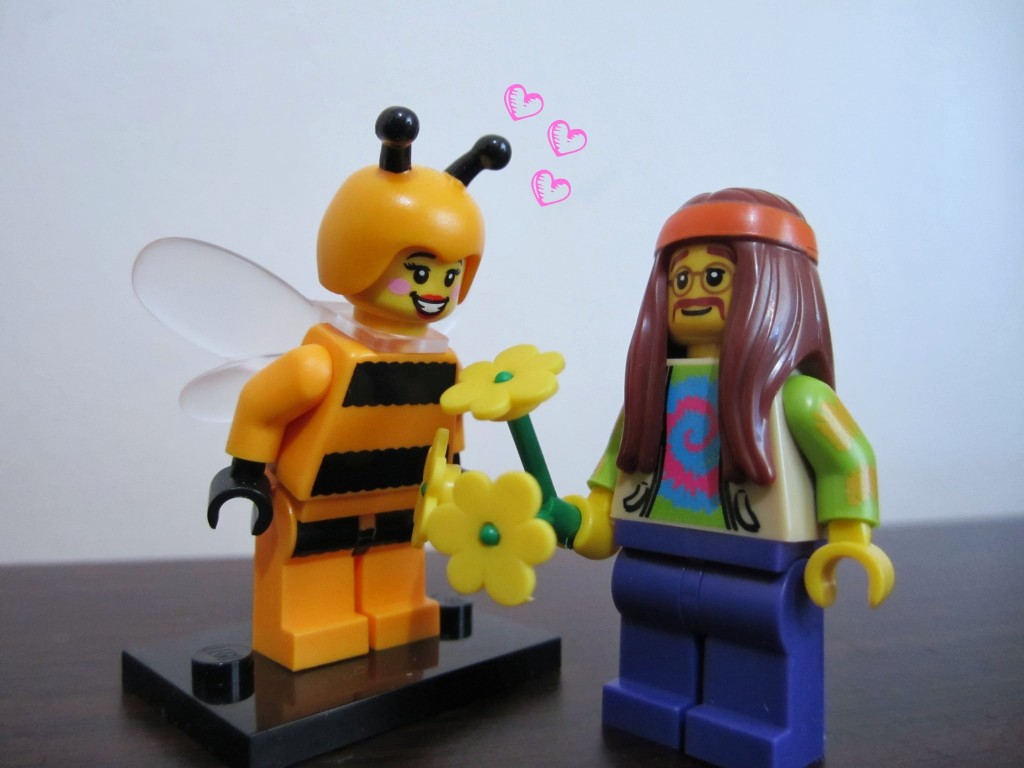 As with the other members of the Lego Animal Collective, I’ve always been a huge huge fan of these wacky minifigs, and I must say, despite her headpiece being made out of inferior plastic, it isn’t easy to stay mad at Bumblebee Girl for long. She’s one of my favourite minifigs in Series 10, with her sugary sweet character design.

How To Find One: Extremely easy to find, due to her wings, which are kinda chunky and easy to make out. If all else fails, you can also try to feel out her honeypot. 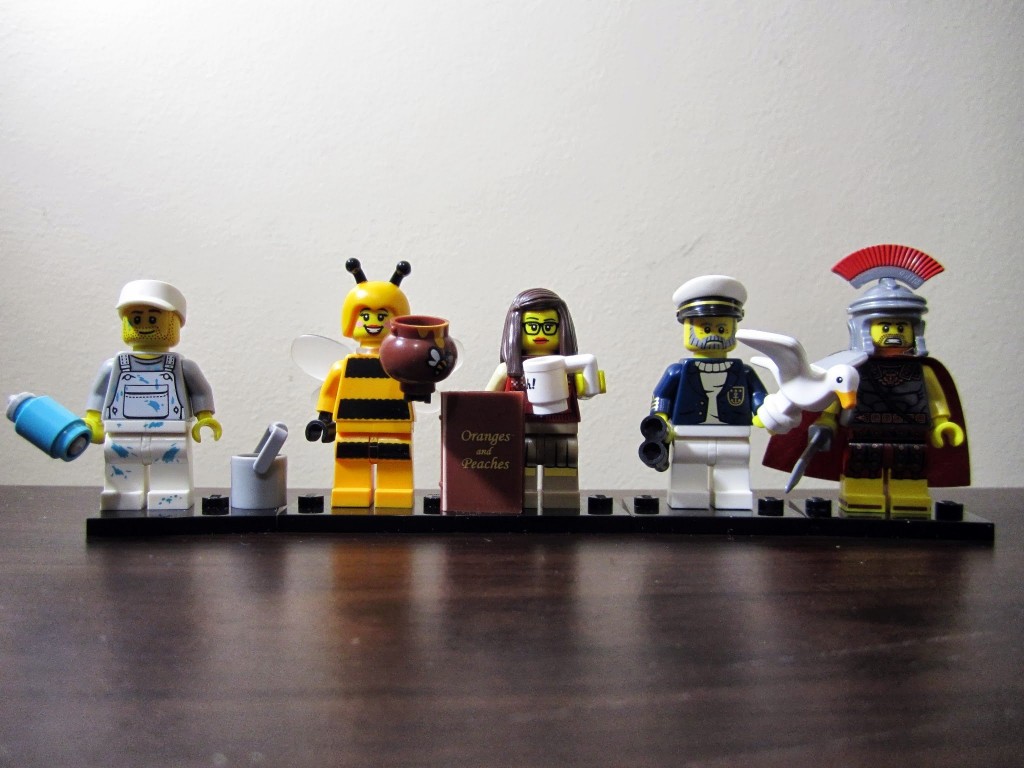 And here we are concluding Part 2 of my Series 10 review. Highlights include Bumblebee Girl and the Librarian, with the Decorator and Sea Captain doing quite well to earn their place in the expansive universe of Lego Minifigures. I have to say that I’m quite disappointed with the Roman Commander as I felt that Lego could’ve done more or substituted him with a different minifig rather than rehash a pretty recent minifig. 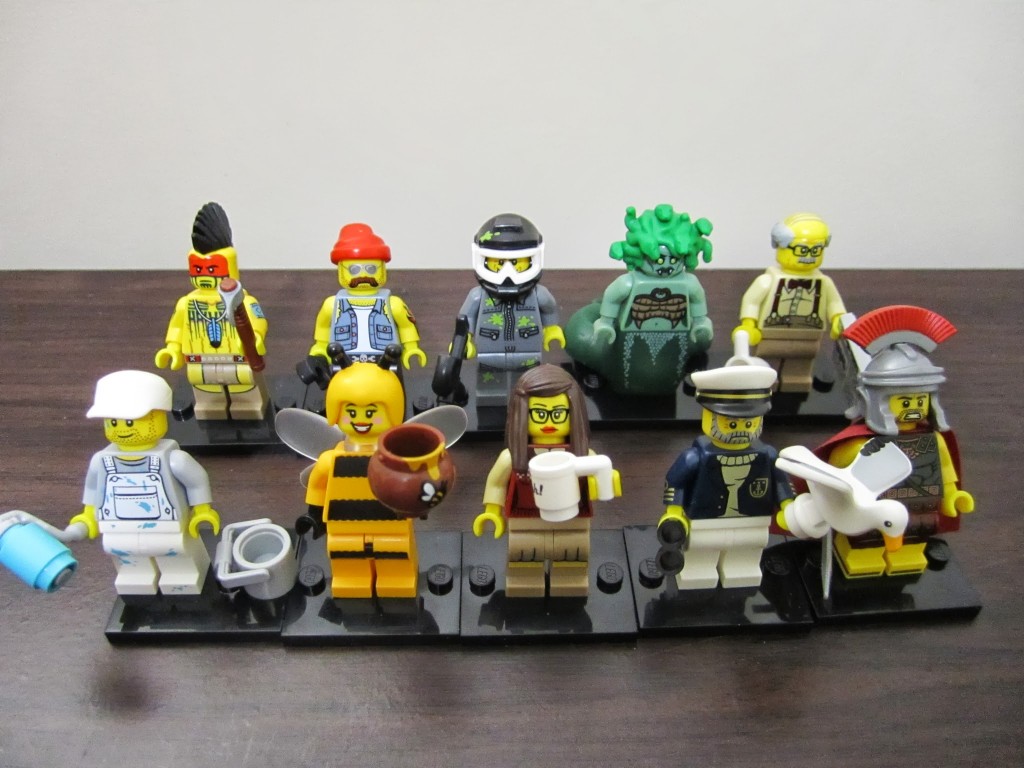 Here’s the lineup from Part 1 and 2 combined. Stay tuned for Part 3 soon!

In case you were wondering, yes, the A-Frame Cabin looks great next to the Tree House!See more photos in my review! jaysbrickblog.com/reviews/review-lego-21338-a-frame-cabin/ ... See MoreSee Less