This is going to be a first in a series of posts about the loot I got from my recent trip to Australia!

Special thanks to Jim & Wei Fen for getting me this set for Christmas! This is my very first set and NOTHING beats the feeling of getting a wrapped present that rattles with the sound of bricks! Thank you!!! 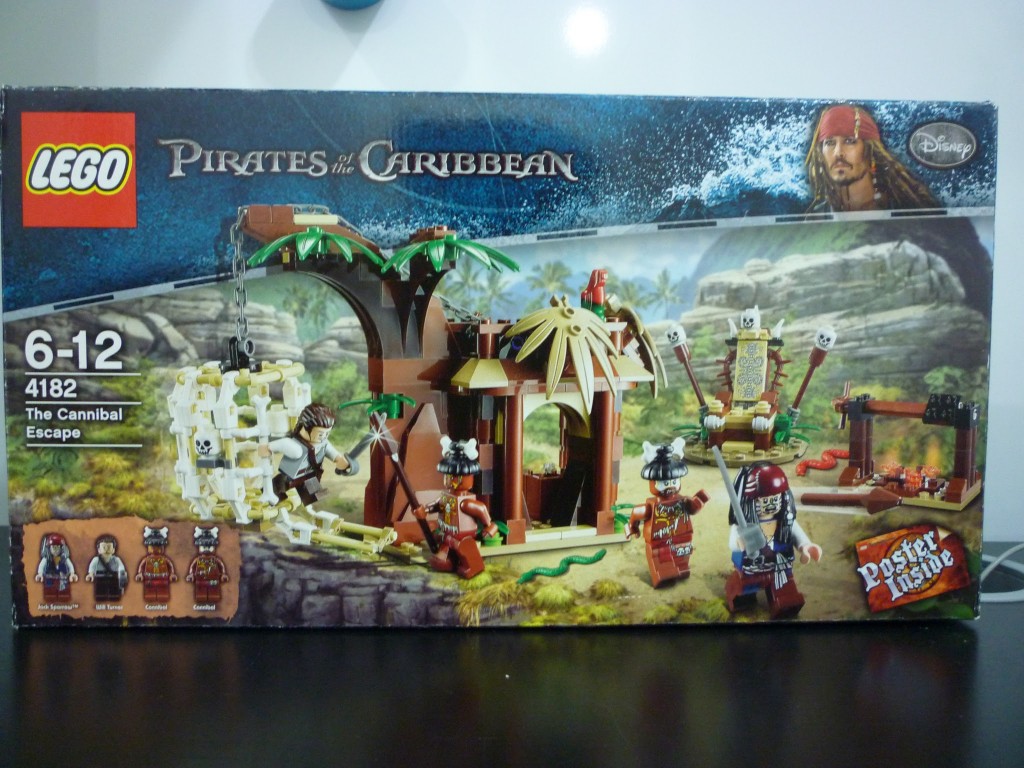 Here’s a look at the box which I think is very well designed. The front shows off the whole set and is a very close representation from the scene in Pirates of the Caribbean 2: Dead Man’s Chest where Jack Sparrow is roasted at the spit and William Turner gets caught as well and rolls around in a giant cage (if I remember correctly). 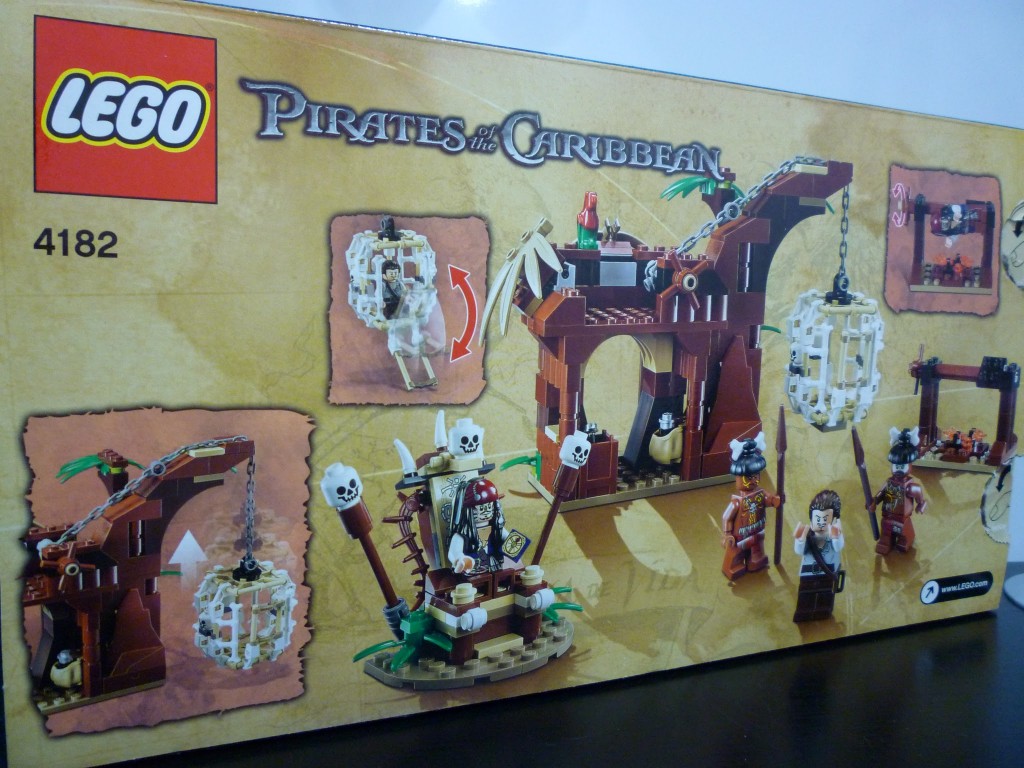 The back features a look at all the different play features of the set, including the cannibal spit roast and bone cage. 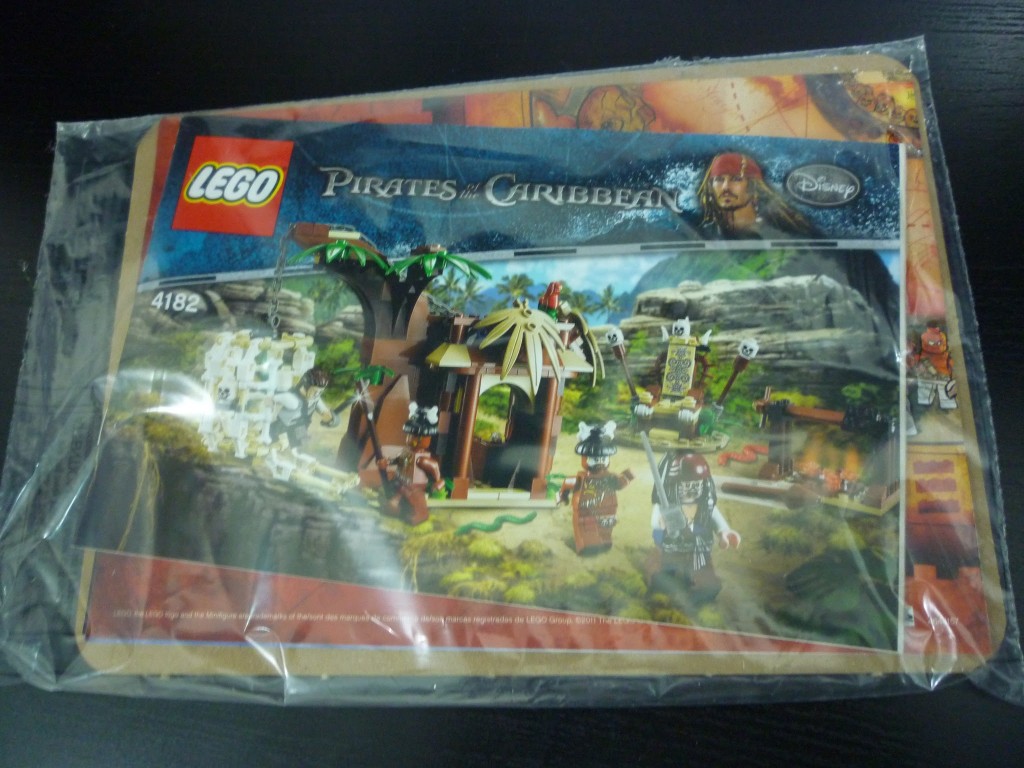 Here’s a look at the nifty little pack the manual and poster came in with. I like that the newer Lego instructions are packed with a piece of cardboard and sealed in plastic so that the booklet is kept in pristine condition. Also, no stickers for this set! Hurray! 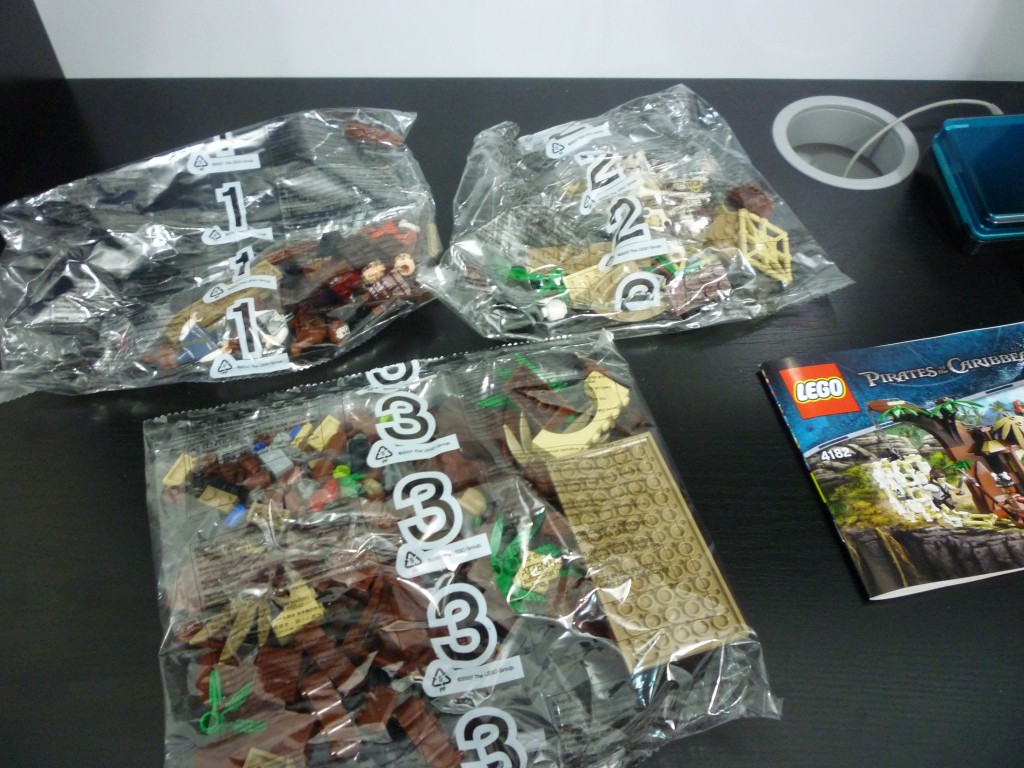 Here are the three numbered bags we start off with.

Bag 1 contains the pieces for the spit roast and as always, it’s customary to begin with the minifigs. I’ve always always wanted Jack Sparrow (even though I’m not that big a fan of the PotC theme. Rather have me some classic Lego pirates, but damn, is he designed well) so this was awesome! I was considering The Black Pearl, but that set is a little out of my budget and not a priority, so if I never get it, at least I’ve got Jack Sparrow! The minifigs are really nicely designed, Will Turner is pretty alright, he’s got a sling for his cutlass which is cool. Best of all, I really love the cannibals, which I’ll go into in a bit later. All of them have back printing, so yay! 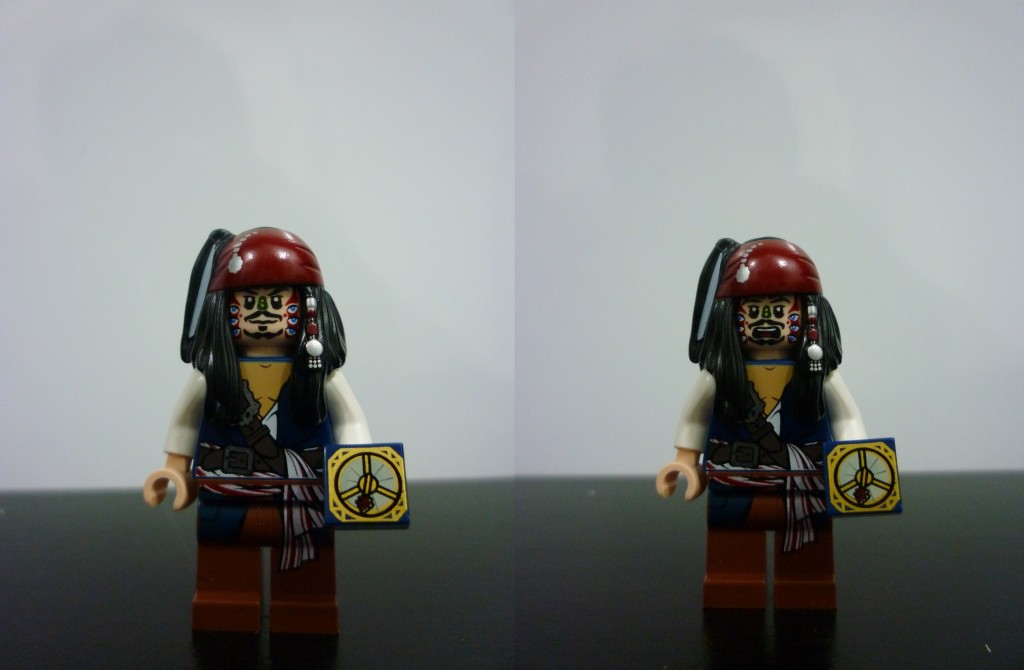 Here’s the star of the set and entire PotC franchise. Really lucky that I got me this set as he has that funky face painting which they did a great job capturing his look from the movie. Great printing except that there’s this little ugly ‘brown’ belt in between his torso legs. As with most of the fleshy licence characters, he’s got two faces, one with a surprised/shocked look. He also comes with his compass (they also included a spare, so yay!). 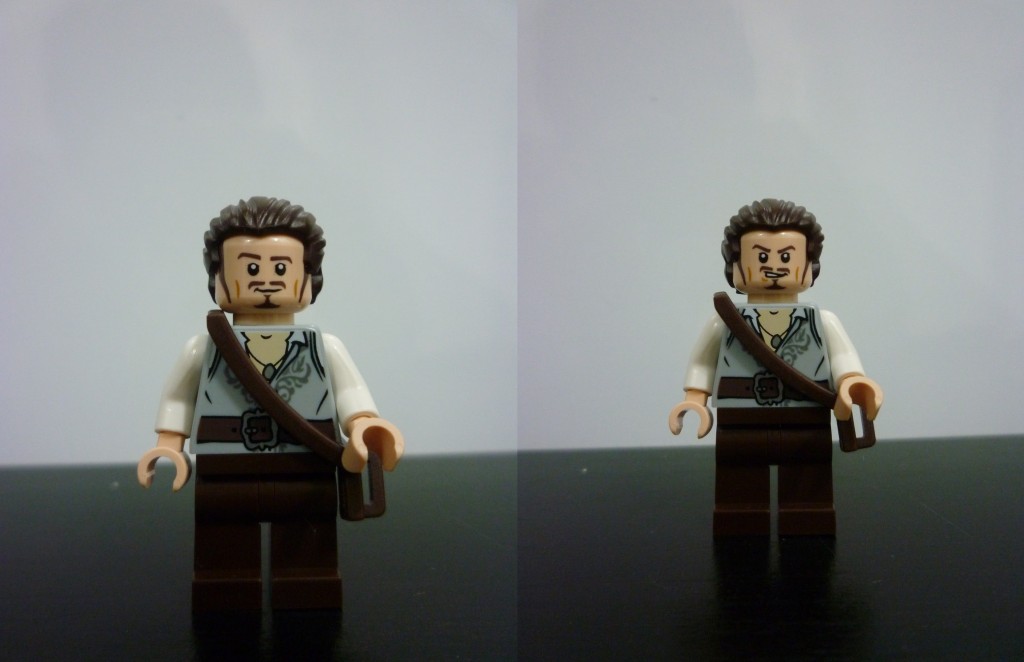 Here’s William Turner. Actually NOT a fan of Orlando Bloom.. but this is an overall nice minifig. Great torso piece which I can probably reuse for another pirate and he also has a 2 sided head with the reverse one showing determination(?). 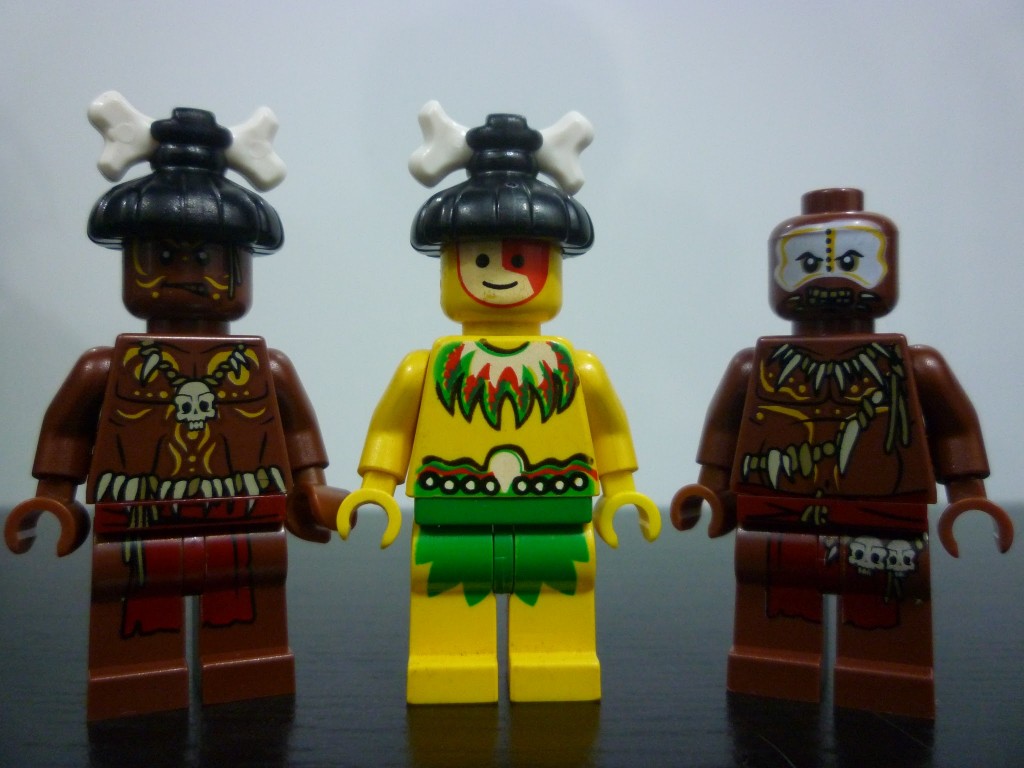 On to the cannibals, which are really nicely done! Lots of detail on their torsos and I’m also glad that they are two unique pieces. Dark skinned Lego minifigs are pretty rare, so it’s nice that we have 2. I included the Islander to give you a n idea of how Lego ‘cannibals’ used to look like! They’re way fiercer nowadays. 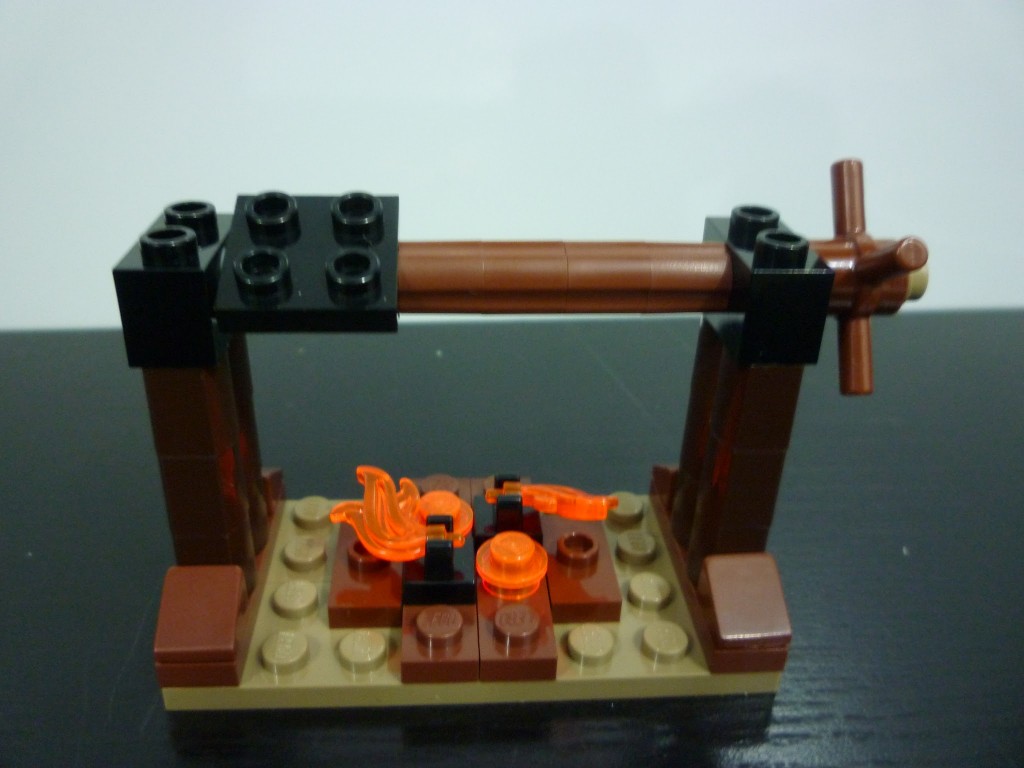 Here’s the completed spit roast which rotates thanks to a handy mechanism, giving it a ton of playability. It’s got a space where you can attach Captain Jack Sparrow and cook him over the fire.

Here’s a look at how it works! Works best with Jack Sparrow’s ‘shocked’ face expression! 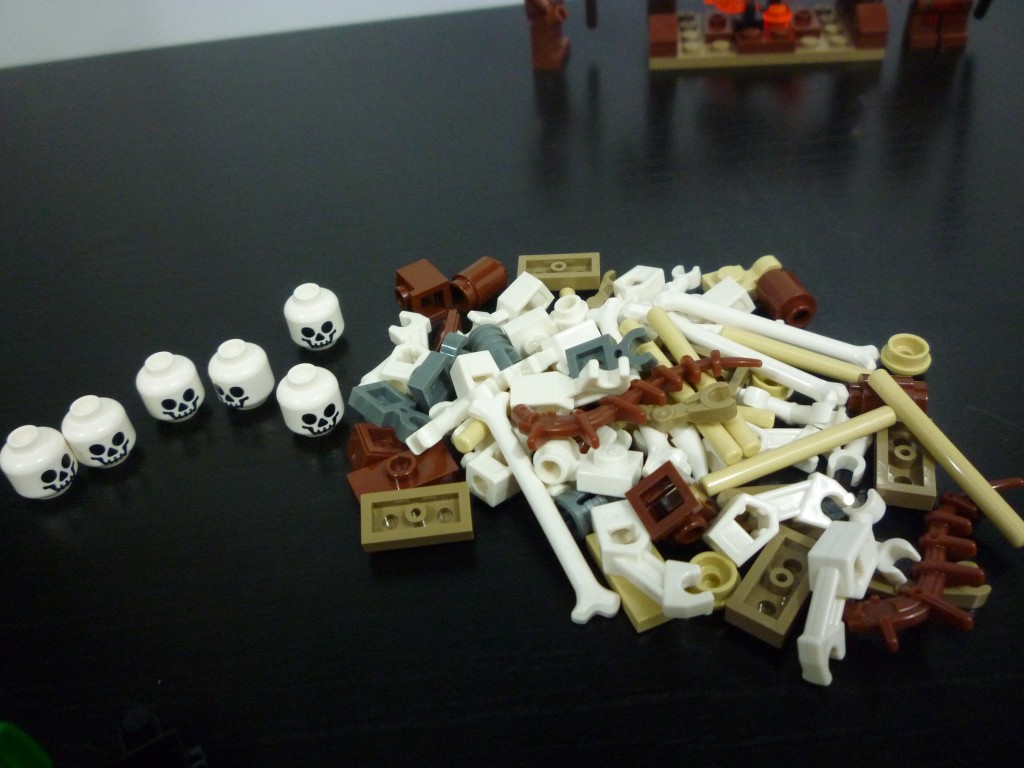 Here’s a look at some of the contents of Bag 2, which contains pieces for Jack Sparrow’s ‘throne’ as well as the bone cage. Scores points for having tons of skulls and bones. 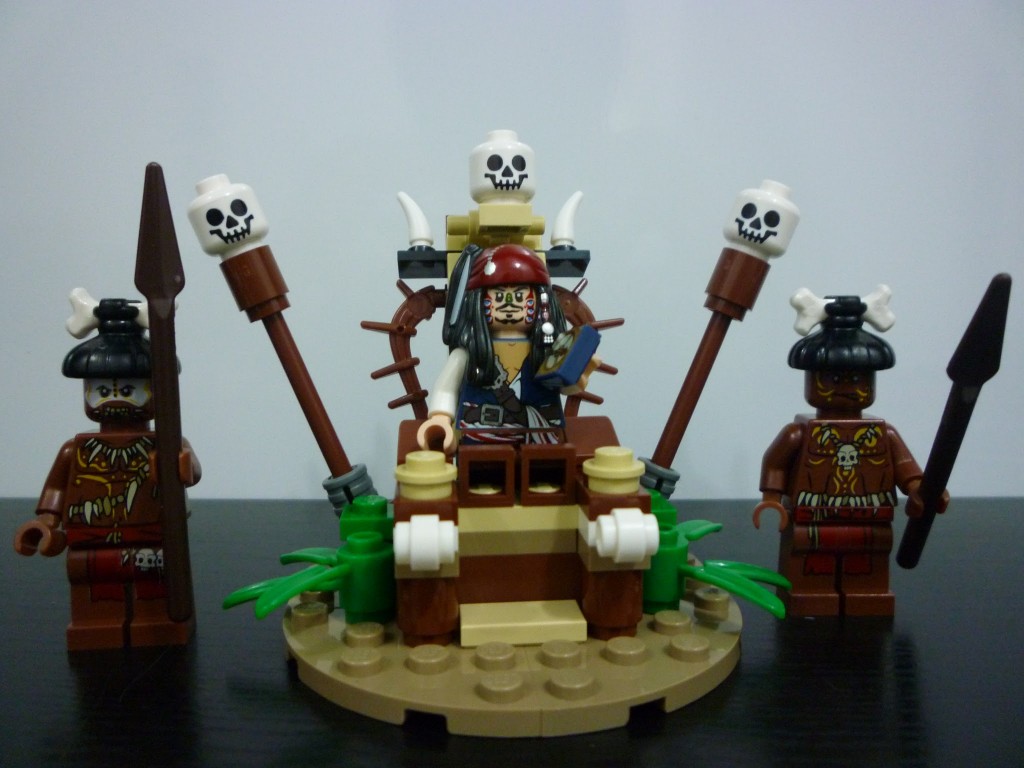 Here’s the completed throne. It’s got a simple design but does a great job. 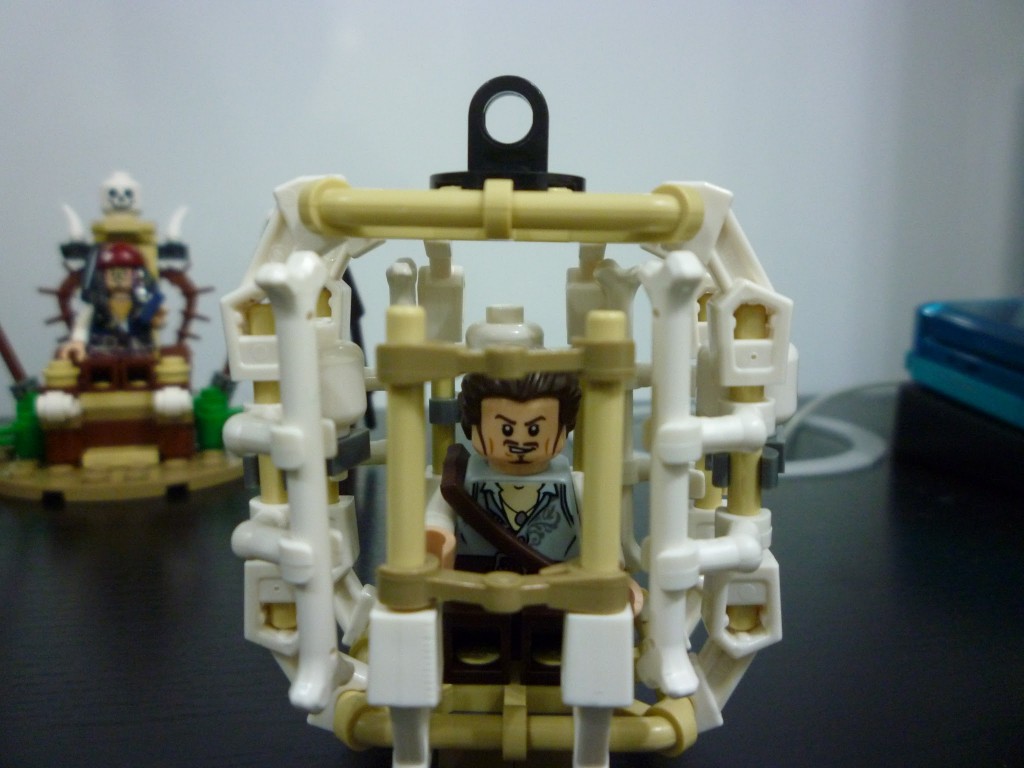 Here’s the completed bone cage with William Turner thrown in. He doesn’t look happy. It used a clever mix of droid arms, long bones and clips to hold everything together. It’s got quite a fragile structure but looks really nice. The door opens and closes to let Will Turner in and out. 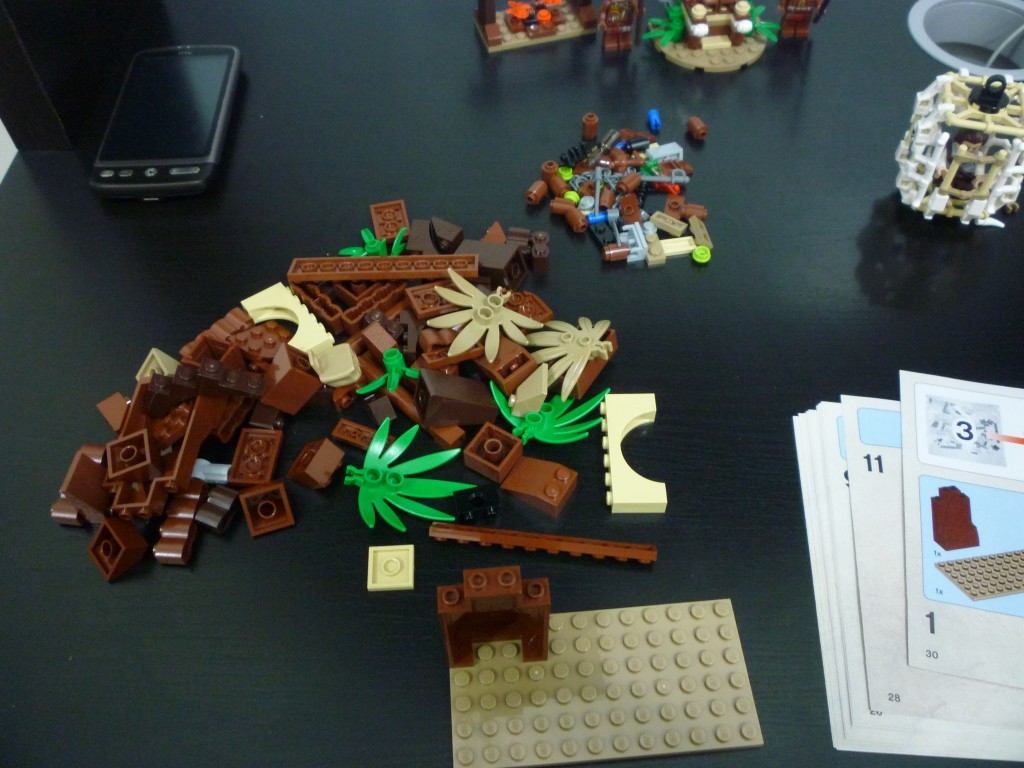 Next up, Bag 3 where we build the Cannibal’s Hovel where the bone cage hangs off.

In Bag 3 we get a parrot (right). Included a classic pirate parrot (left) as comparison. The newer one has a pretty nice gradient colour scheme but imho, lacks the personality of the classic one. 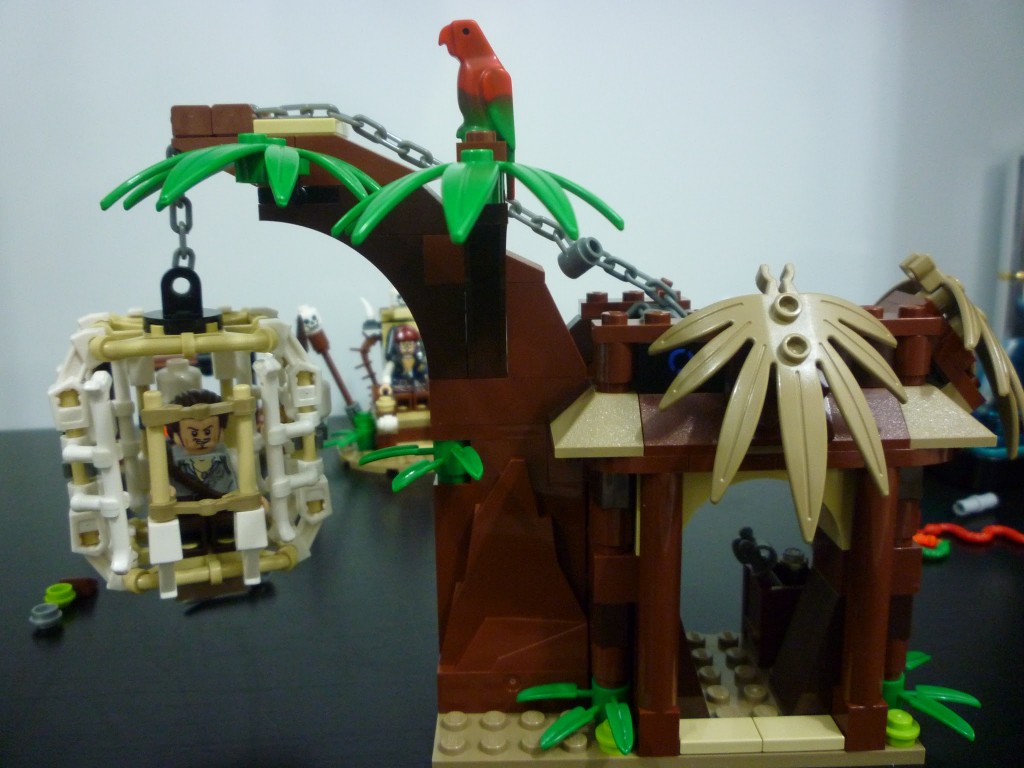 Construction complete! The cage of bone hangs off 2 chains and can be lowered up and down using a crank mechanism. 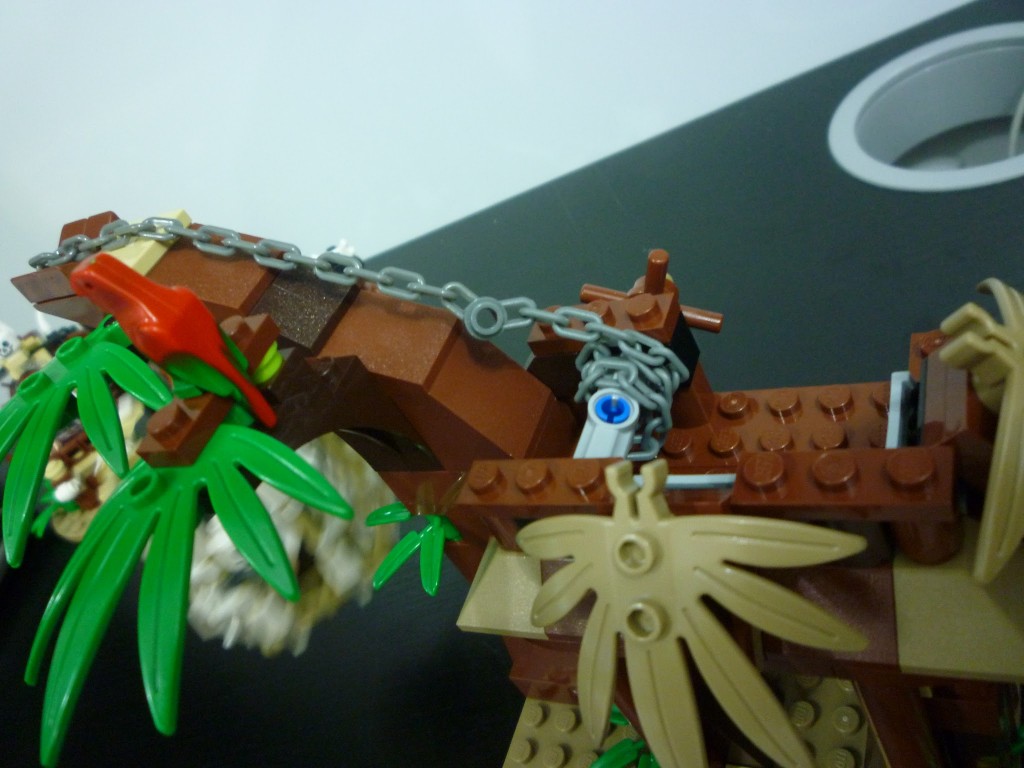 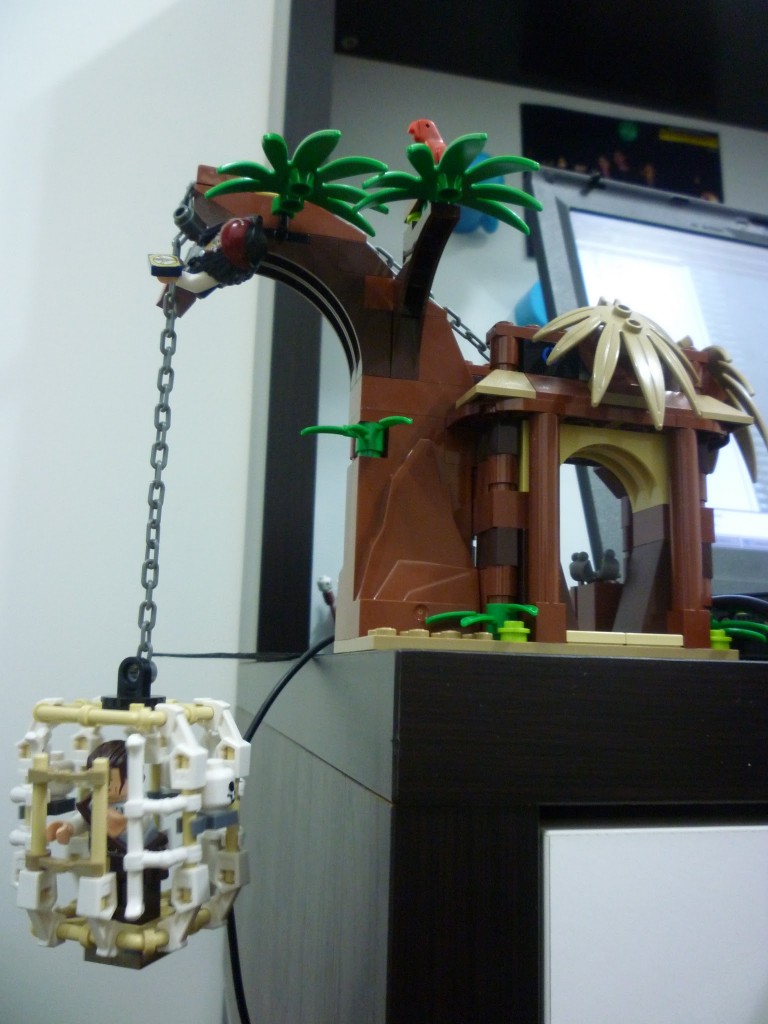 Here’s how low it can actually be lowered down to. 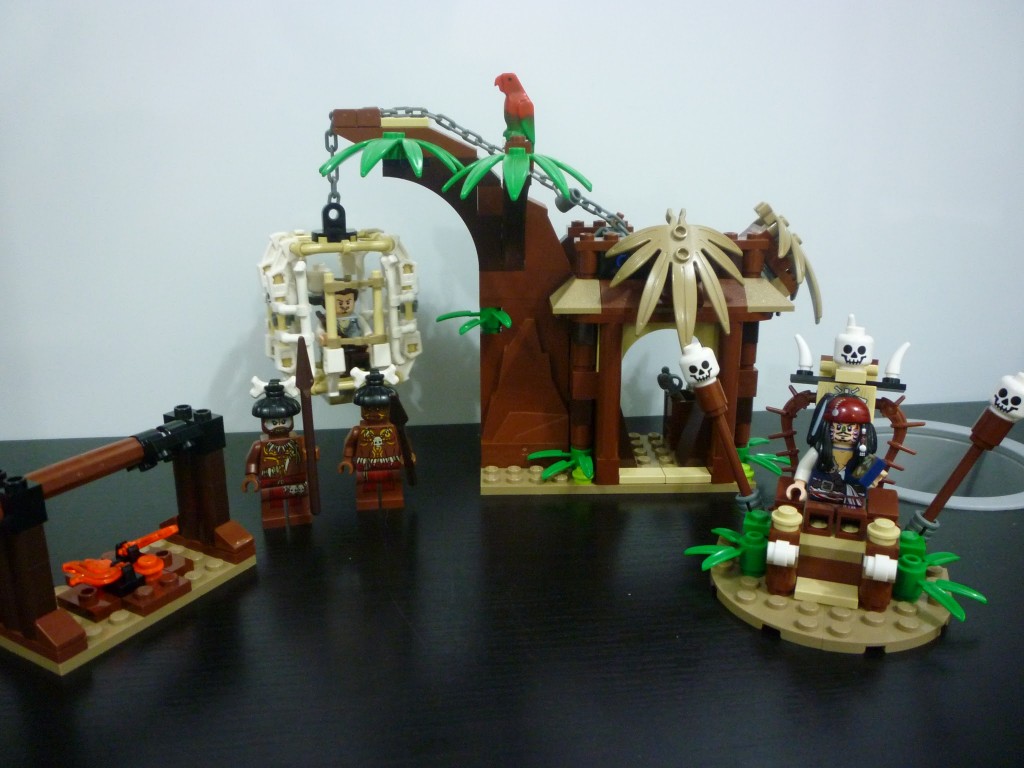 And we are done! Here’s every piece of the set together. Lots of cool play features with in this set, which I like. Kids ought to get a huge kick out of it. 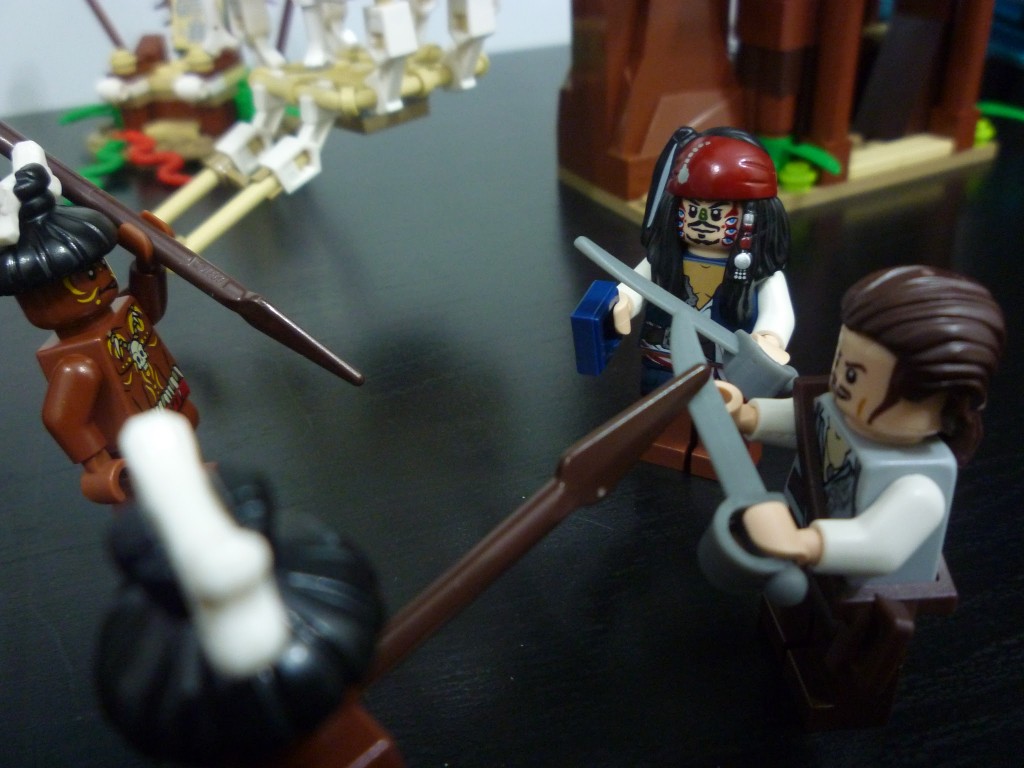 Here are some action shots of Will Turner and Captain Jack Sparrow fending off the cannibals. 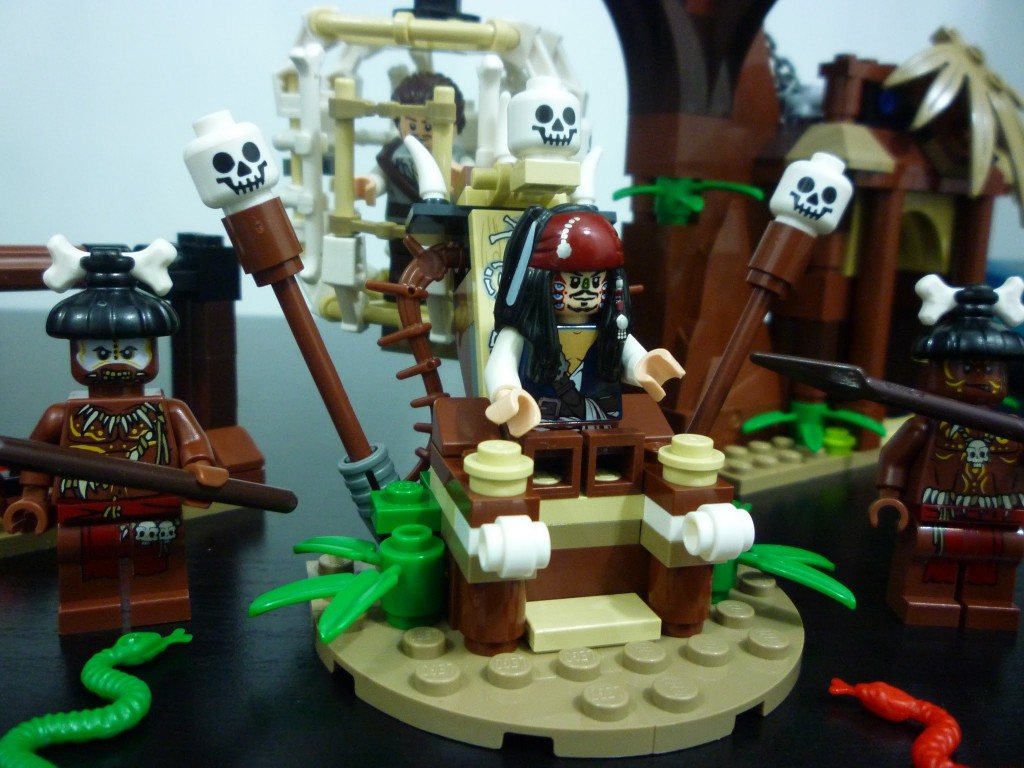 Sitting on the throne again. Did I mention the set also comes with a green and red snake?

Here’s Captain Jack Sparrow drinking what I presume to be rum. I love that the set included one bottle, which are pretty hard to come by!

The cannibals are obviously not very happy with Jack’s alcoholic tendencies.

Final thoughts
Would I recommend buying it? Yup! Except for the fact that I think it’s quite a pricey set (due to it being a Licensed Theme) but if you can get this at a good discount, it’s quite a nice set to have. I like the fact that it is a very accurate representation of the movie and that it all fits together, nothing seems forced. Oh, no stickers too which is always a good thing!

Ratings:
Playability: 8/10 Spit roasting Jack Sparrow is every bit as satisfying as it looks! Also love the crank that lowers and raises the cage of bones. The cage is excellently designed and can be used in a variety of other set ups other than Pirates of the Caribbean.

Design: 8/10 Stays true to the movie. You get quite a bit of greenery in the form of palm fronds (both tan and green) and you get a lot of nice brown (and some dark brown bits). No stickers and you get a printed tile for the back of Jack’s throne. Everything fits together and it looks really cool on display.

Price: 5/10 If I’m not wrong, the set retails at about RM200+ here, which is on the very high side. That’s one of the main reasons why I’ve actively avoided PotC sets.

Minifigures: 9/10 Jack Sparrow’s got his crazy cool tribal eye makeup. Will Turner is apparently quite rare and the two uniquely designed (Thank you Lego for not being lazy and rehashing them!) cannibals round up the selection nicely.

Parts: 8/10 You get some dark brown bits, 4 palm fronds, a new parrot, a bottle and lots and lots of bones and skulls. Huge plus. Oh and two chains as well!

Total: 38/50 Pleasantly surprised by this set! Loses points a bit because it’s quite highly priced but it was quite fun building (not a lot of repetition) and it just looks really good on my desk. Rounded up by a strong selection of minifigs, definitely a set to look out for if you’re into Pirates of the Caribbean!