Here’s a tiny set I got in Australia, in Adelaide, last December! I was looking around for Lego when I stumbled upon Toy Corner, which is right opposite Tea Tree Plaza. I didn’t think it was much, because the lady at Toys R Us told me to check it out, I expected a tiny Lego shop. I turns out, Toy Corner is a specialty Lego shop, with EVERYTHING. It was like walking into a Bricklink store. Amazing stuff. I left with this small box, because, HECK YEAH, knights!

On to the brief review! 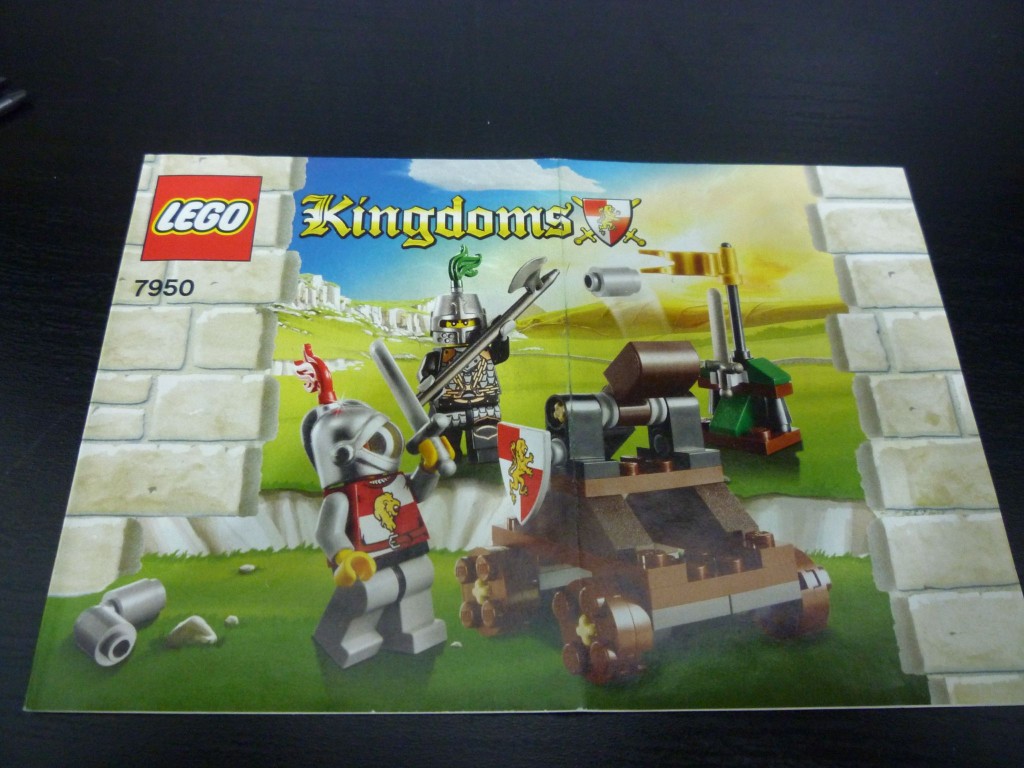 Here’s a picture of the manual. It’s a pretty cute set with a nicely armoured Dragon Knight going up against a Lion Knight. Lego was also nice enough to throw in a catapult and a weapon’s rack as well. 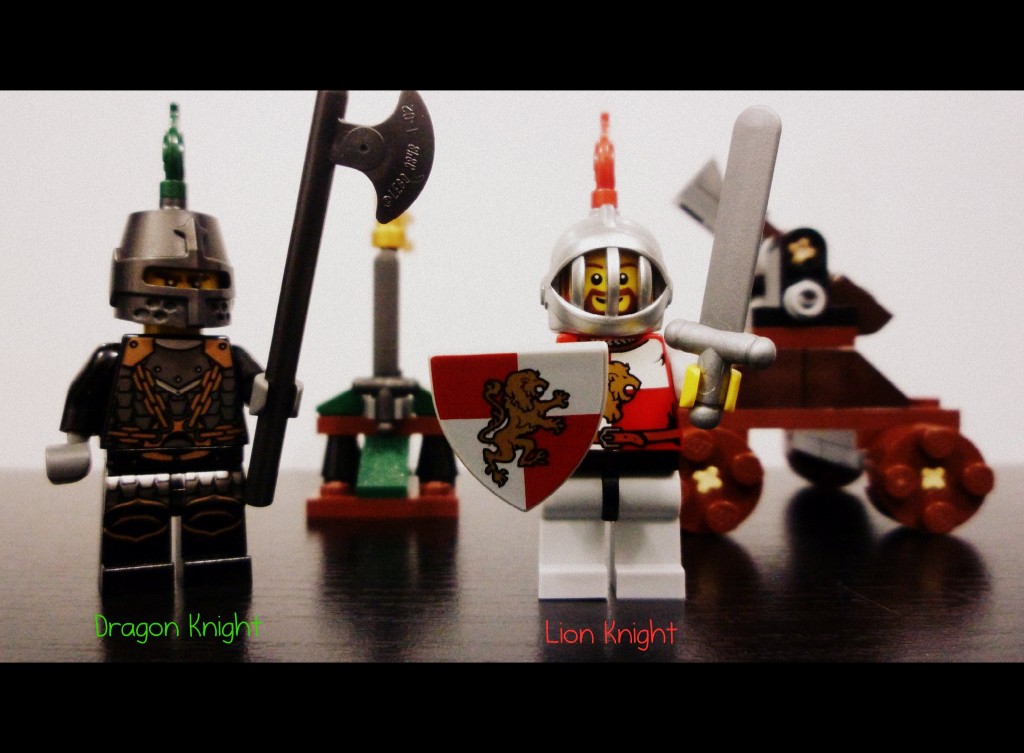 The minifigs! For the Lion Knight, we get a nice pearly coloured grill helmet. His torso printing is only okay, a bit disappointed that his legs are a little bland, but I like the belt he has going on. Both knights have their respective green and red plumes(yay!)

The Dragon Knight is clearly the star in this set. His torso printing is mostly metallic, and the amount of detail in his torso is astounding. He’s got a bucket helm, which was what initially drew me to this set. I wonder where we’ve seen a bucket helmet-ed knight before… 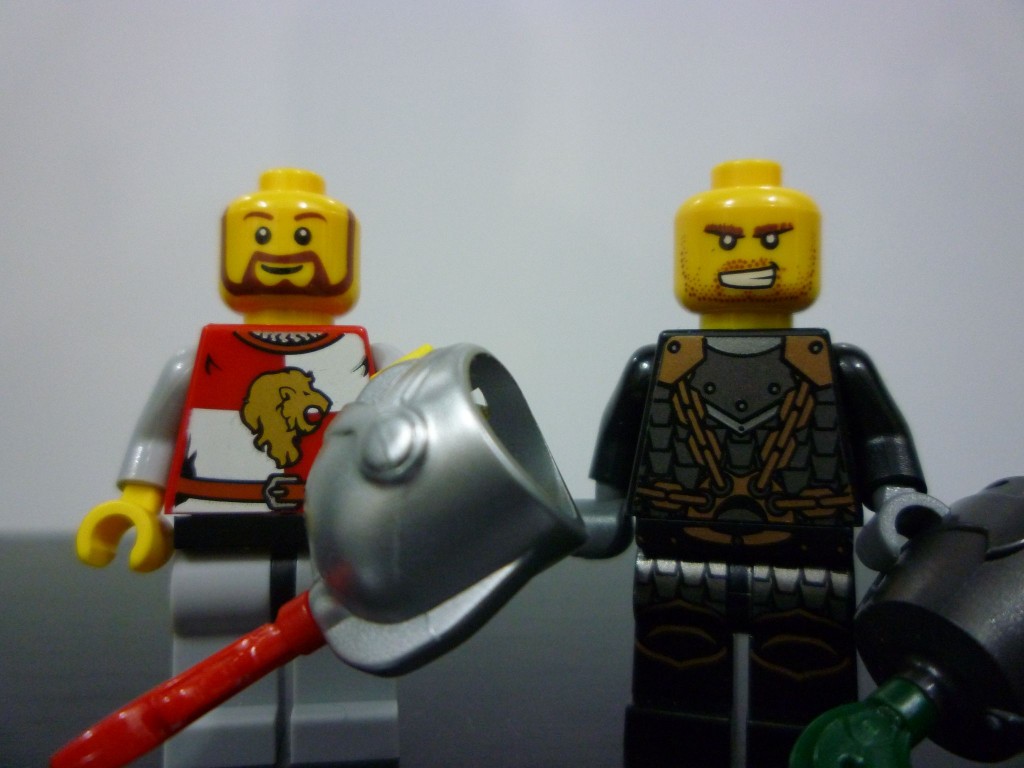 Here are the brave knights unmasked. The Lion Knight has a goofy look to him and the Dragon Knight looks way cooler, with his smug grin and stubble. 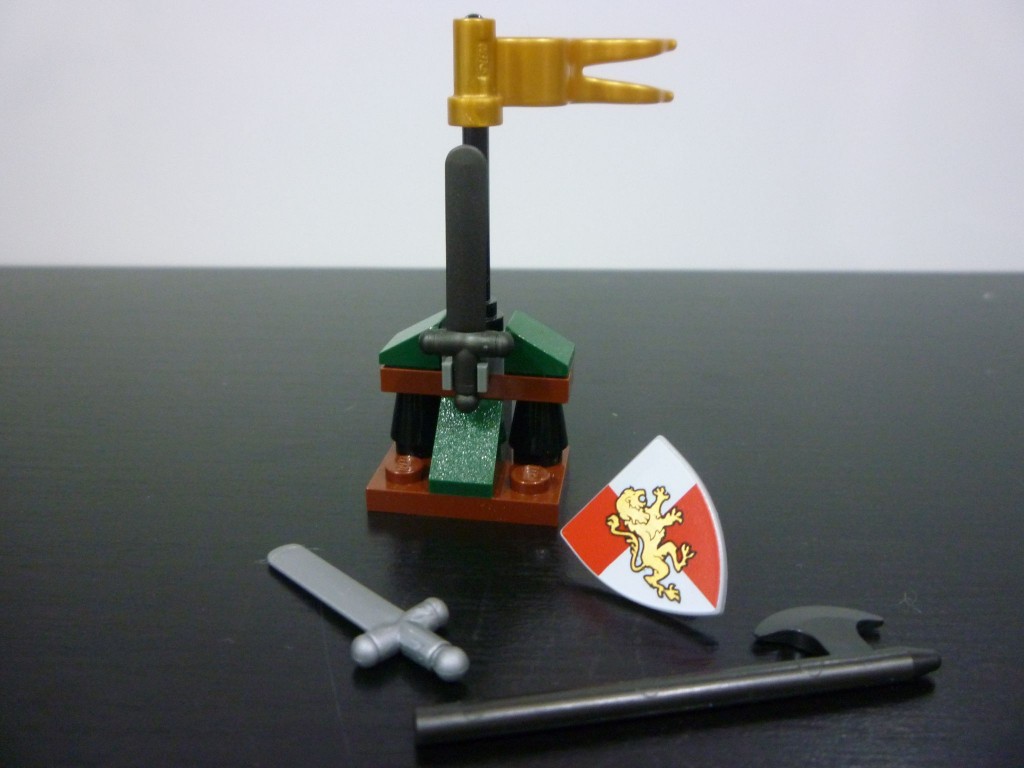 What are knights without their weapons! We get a weapon stand in Dragon Knight colours, so I’m guessing that this showdown is happening on Dragon Knight territory. The Dragon Knight has a sword in black, attached to the weapon stand and wields a giant Bardiche. That’s it, no shields, because it seems like Dragon Knights believe that a good offence is the best defence! The Lion Knight has a kite shield to defend himself and a pearly grey broadsword. Again, I do not like the swords in Kingdoms as they look like toys. The Kite Shield gets points because the Lion is painted in metallic gold. I keep thinking of Lannisters everytime I look at their sigil. 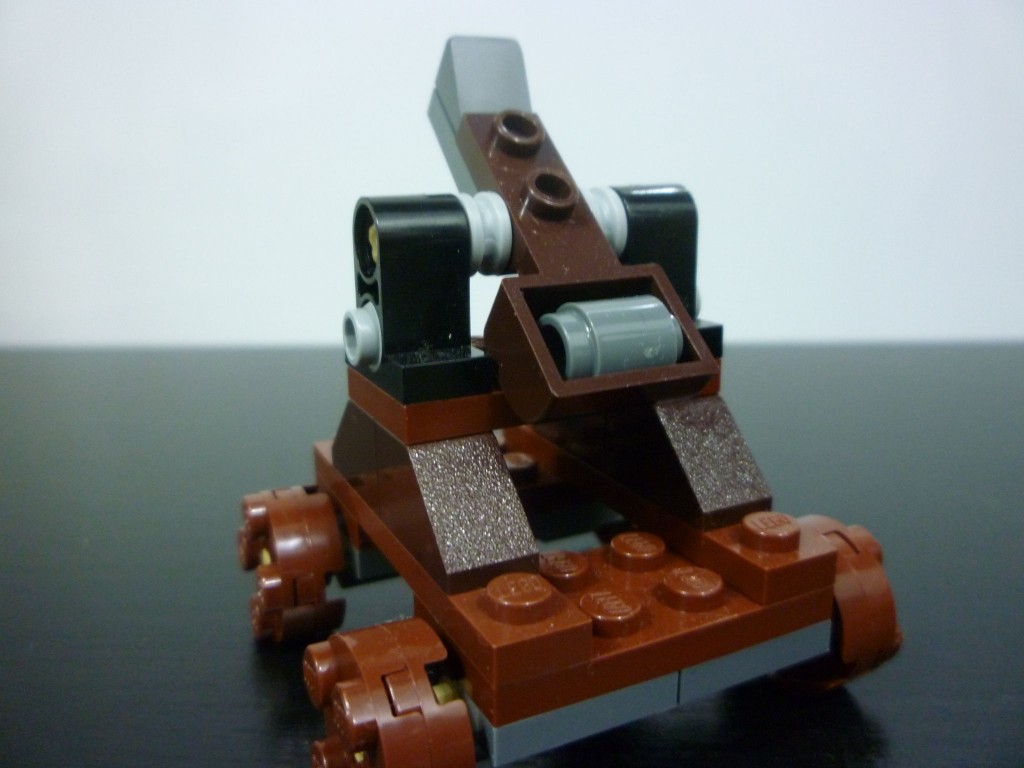 Here’s the neat little catapult contraption. It does its job, you press down hard on the grey cheese slope and it launches a 1×1 cylinder brick into the air. It’s actually got quite a bit of power for a small launcher. It also has wheels and rolls along nicely as well. A nice filler piece to bump up the brick count, but well received. 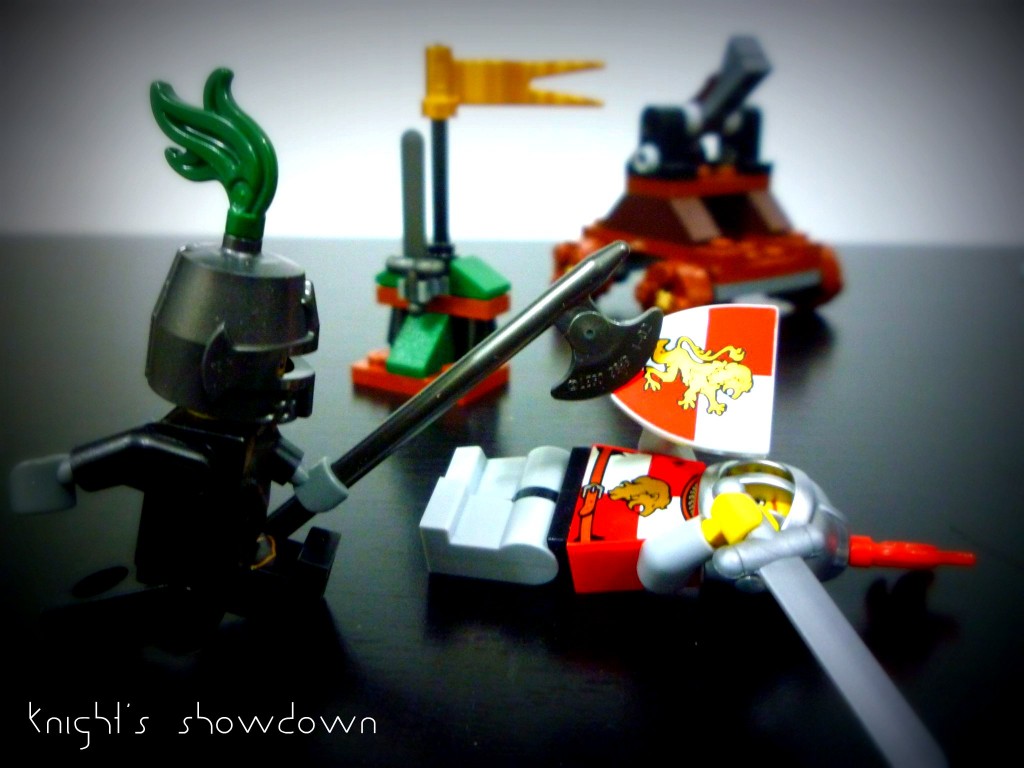 Here we see the Dragon Knight railing on the Lion Knight, which thankfully has his shield to protect from the bardiche’s crushing blows! That’s it for today, thanks for reading!

Final thoughts
I would peg this as a buy, especially if you’re into Medieval Swords and Knights-style Lego. I got it at a great price point, which comes to about RM27 for two really well designed minifigs and a nice selection of accessories too. The accompanying pieces are a nice addition too.

Ratings:
Playability: 8/10 Two well equipped knights battling each other with a sweet selection of weapons? A catapult for launching bricks at an enemy? Fun!

Design: 8/10 I like the sword stand, it’s very tightly designed and the catapult is pretty alright as well. The catapult uses tan, brown and dark brown pieces to great effect.

Minifigures: 9/10 Great pearly black and grey battle gear. The Dragon Knight steals the show with its immaculate torso print and we also get a neat grill helmet for the Lion Knight. No complains here!

Parts: 8/10 You get a couple of dark green (Dragon Knight official colours) cheese slopes and slopes, a lot of brown, a pearly golden flag and some nice battle equipment. Not too shabby!

Total: 42/50 A great set to have, especially if you’re stretched for cash. Good minifig + accessory to price ratio and you get a little siege machine which can be useful when combined with other castle sets. Kind of hard to find since Kingdoms have been largely discontinued, but some shops like Brickboys still carry them. If you’re a fan of Medieval Lego, you owe it to yourself to get one!