Here’s the second Friends set that I’ve built after Emma’s Fashion Design Studio and it’s quite obvious that I’m a huge friend of the Friends line. Yes, I love civilian Lego sets, and yes, the minidolls have grown on me that I don’t flinch every time I see one side by side with a regular Lego minifig. 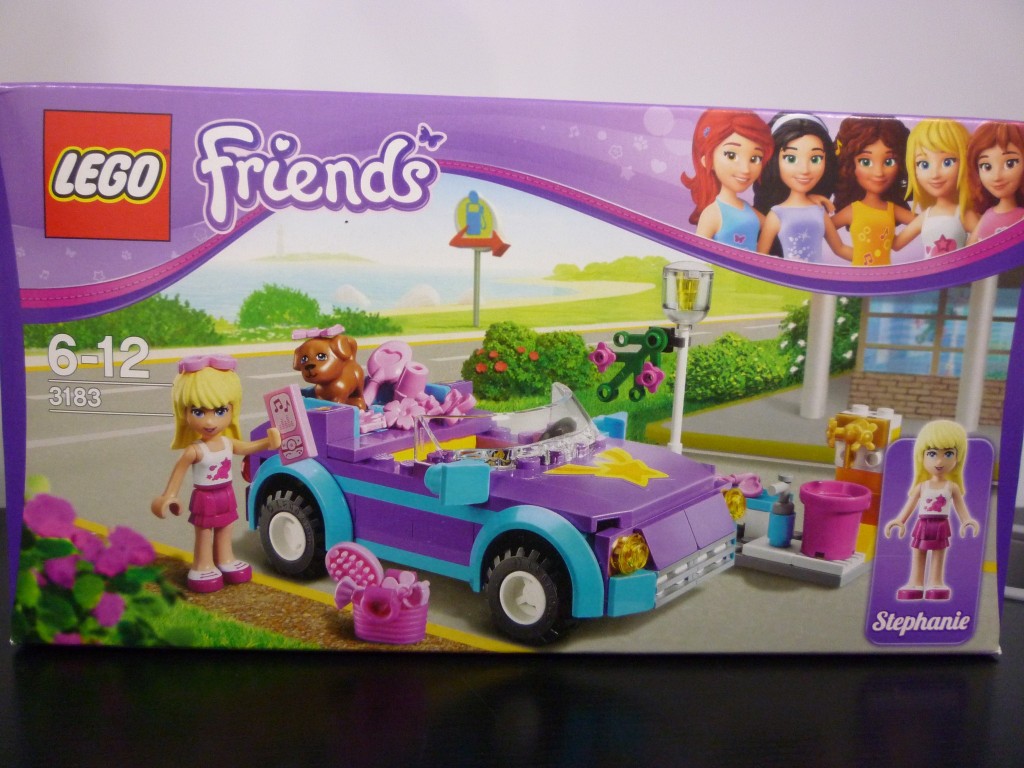 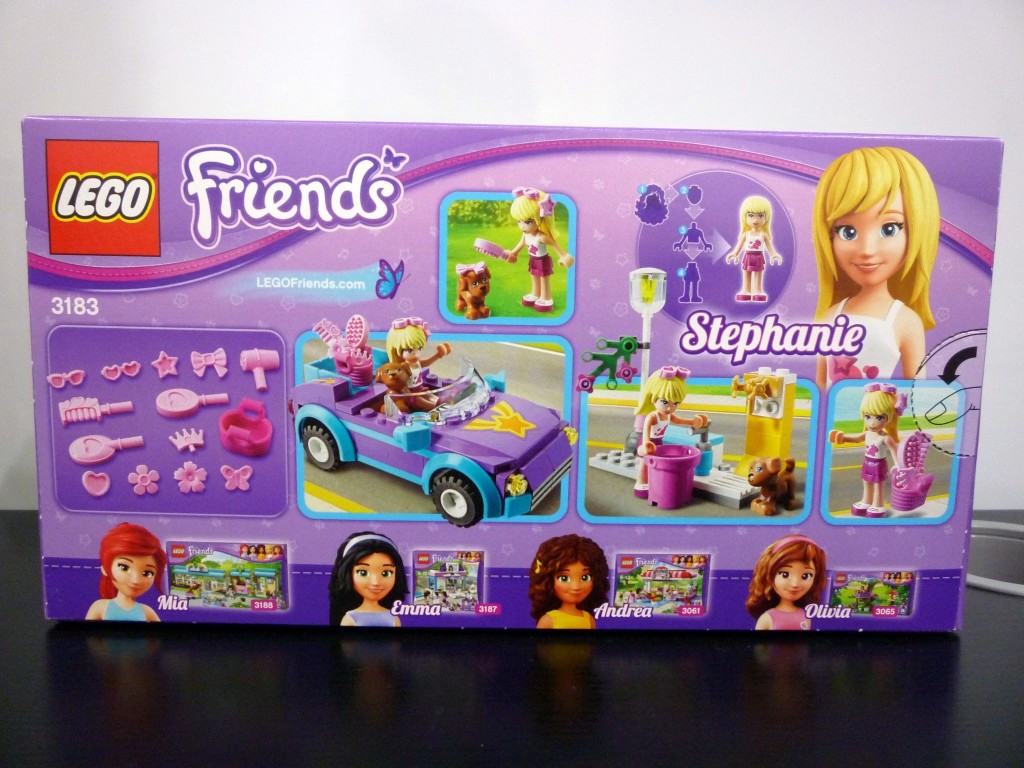 Here we have the obligatory box shots in all its purply glory featuring regular action shots of the set and all its ‘play features’, if you could call them that. One of the standout features of this set is the bevy of hair accessories for both the dog and Stephanie (they’re interchangeable) which I’ll highlight on a bit later. 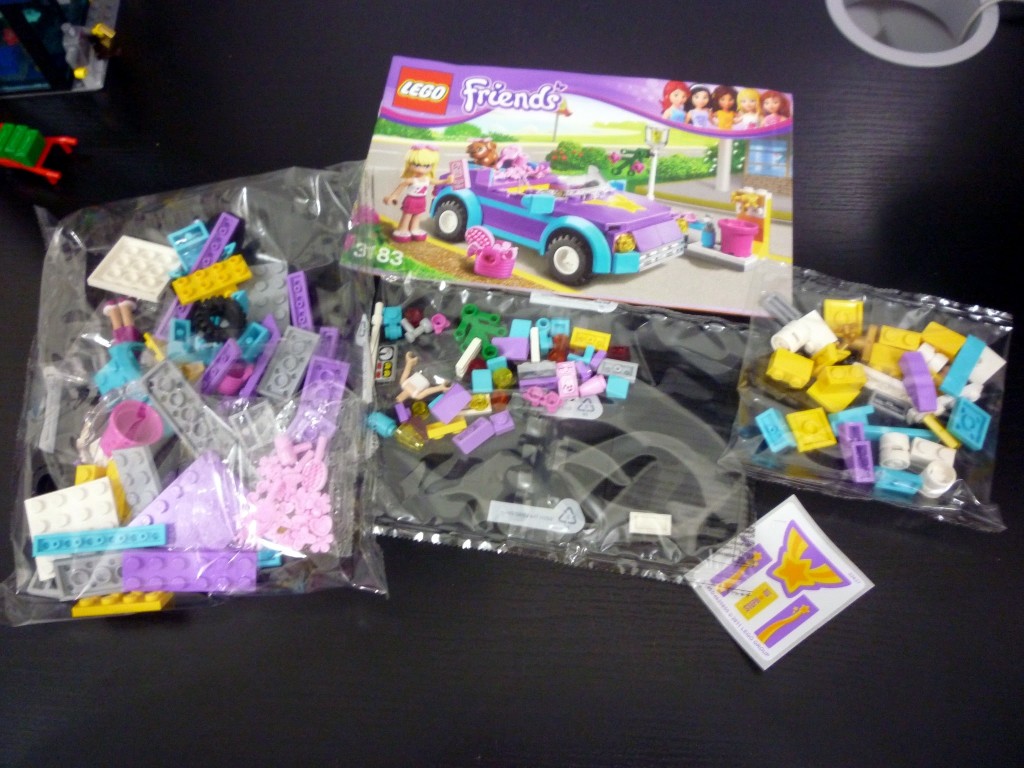 Here are the bags of parts (notice the horrendous sticker sheet) which was what drawed me to the set, other than the not-too-shabby price point. As with any Friends set, pink, purple and azure bricks are aplenty. Here are some of the standout parts 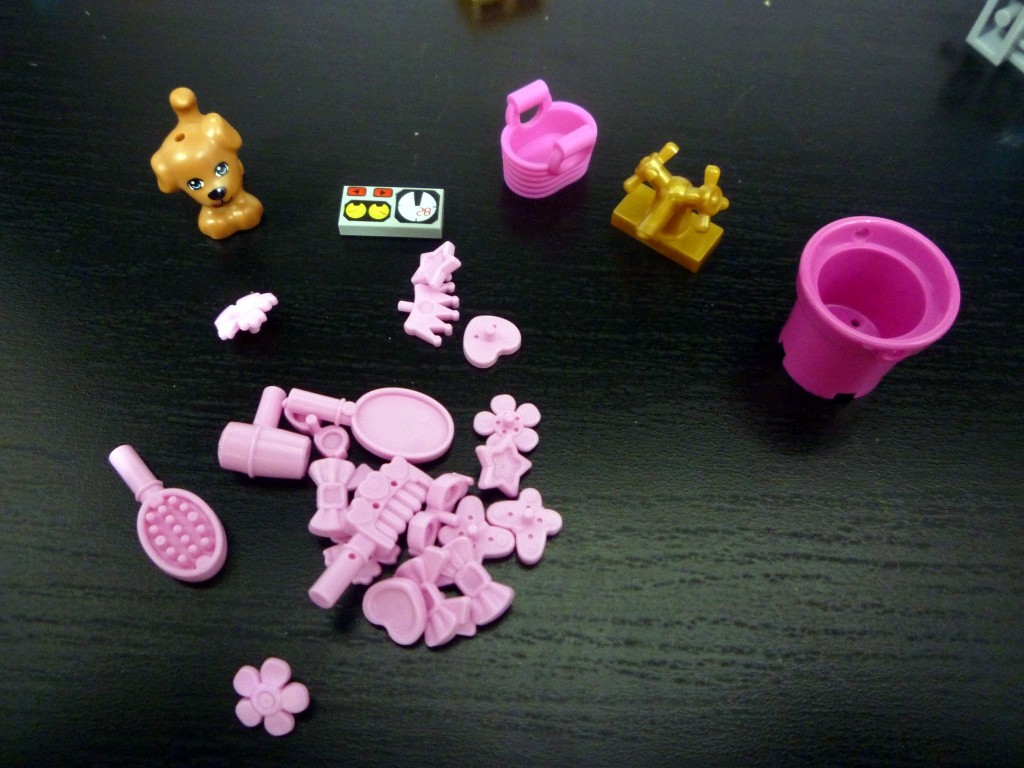 Here we have the accessories in pink! Highlights include:

Not a bad collection of parts at a great price point, especially if you include the actual bricks that make the convertible. 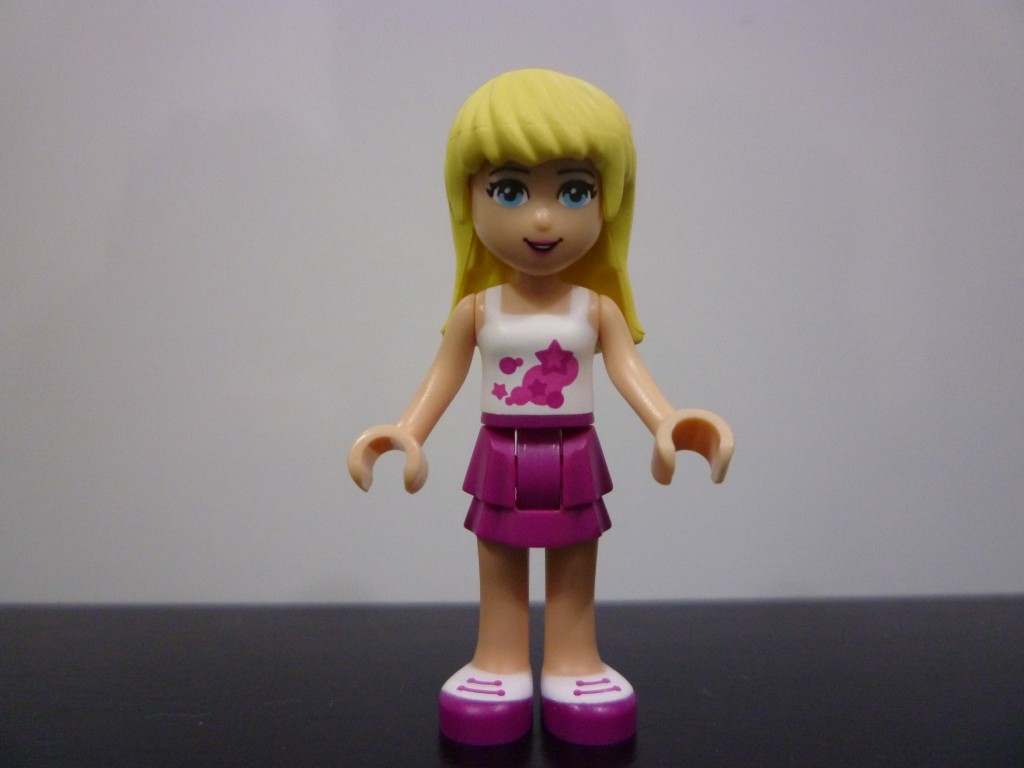 Meet Stephanie, the resident blonde haired chick of Heartlake City! She’s a pretty little thing, all decked out in Pink (or is that purple? I have no idea) with that doe-eyed look blonde girls do so well. My favourite thing about her outfit has got to be her shoes. They look really simple, but I think the detail that went into the laces was a very nice touch. First thing you gotta know about Stephanie is that she’s not really too good with putting a whole convertible together! 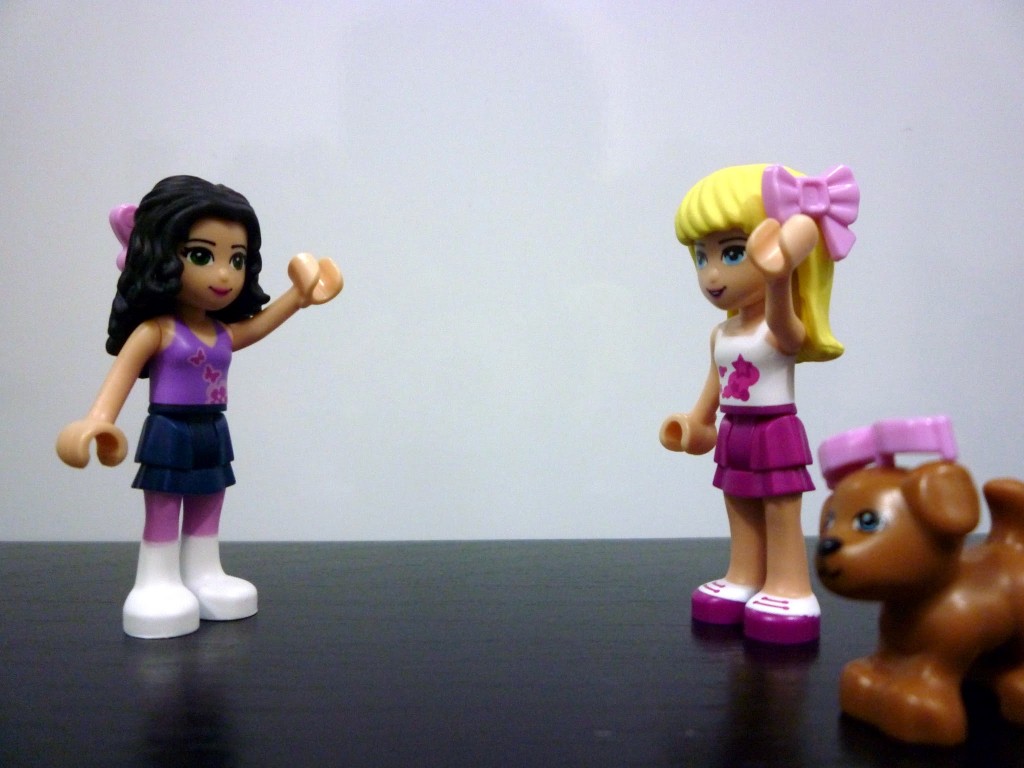 Help is never far away at Heartlake City! She gets her friend, Emma to help her out. Emma’s just a fashion designer, cars aren’t her forte either. But Emma has a cousin who lives over at Minifigville who happens to work as a mechanic. They’ve given him a a call, so he’s on the way. 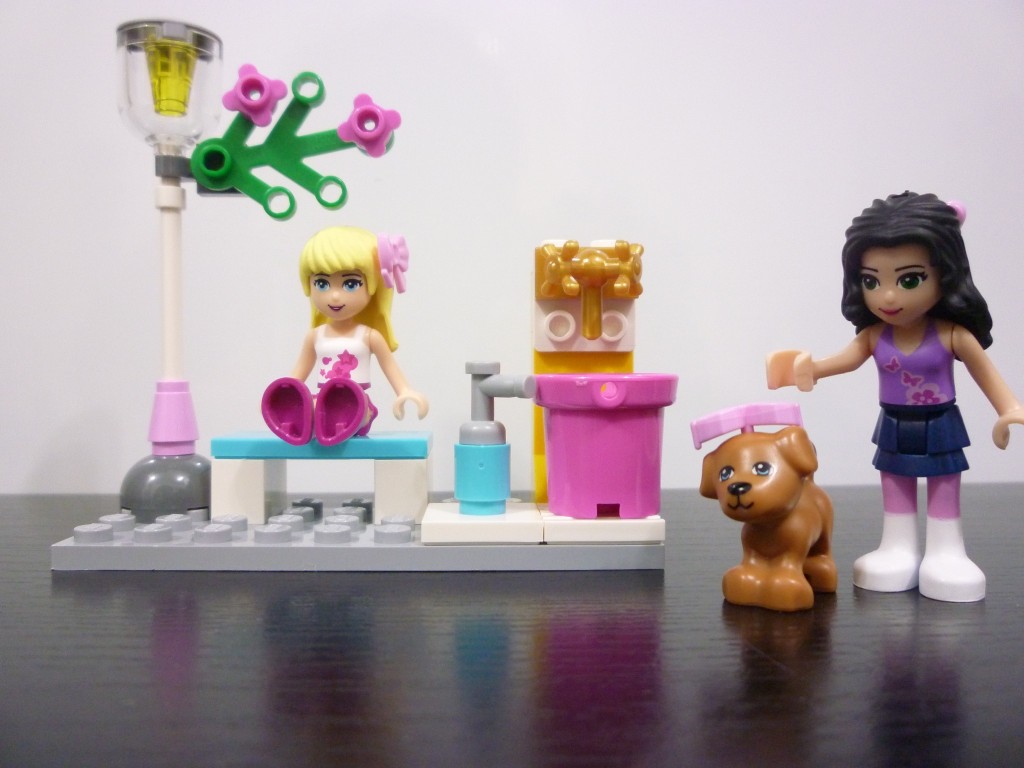 They wait at a conveniently placed street corner, complete with lamp, a small bench and a place designated for dog washes. I really like how they designed the street lamp, but I don’t get why there’s a leaf/branch attached to it. The dog bath area is pretty neat as they used grills for the base and we get that majestic looking pearl tap. Also comes with what I assume is a bottle of shampoo. 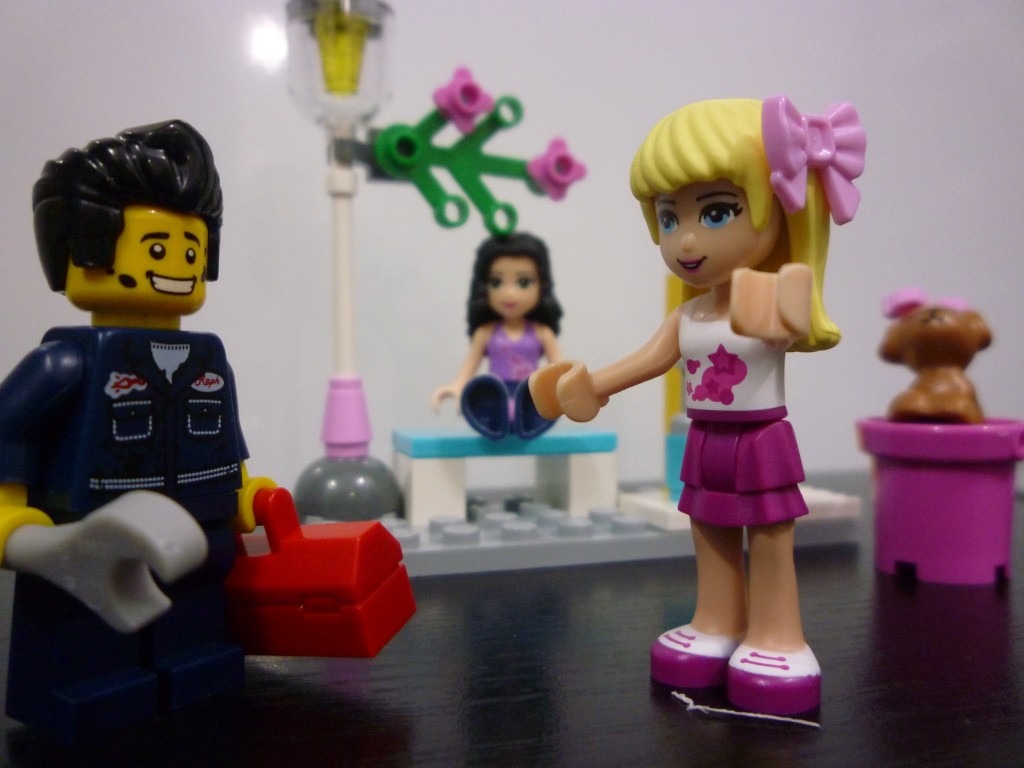 Here we have Emma’s cousin, I’m going to call him Ramos! He looks a little different, but that’s okay because he’s a whiz at cars! 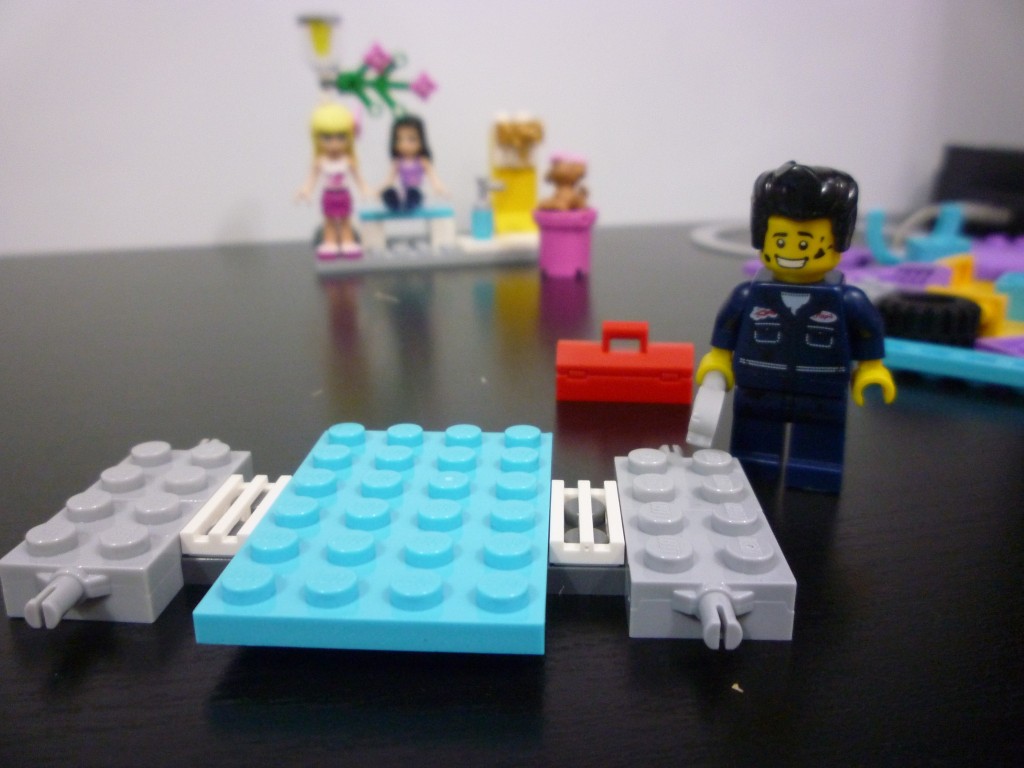 Ramos immediately gets to work starting with the undercarriage. This car is as girly as they come, what with a light blue plate forming the base of the car. The girls seem to be having fun in the background talking about puppies or dogs or whatnot. 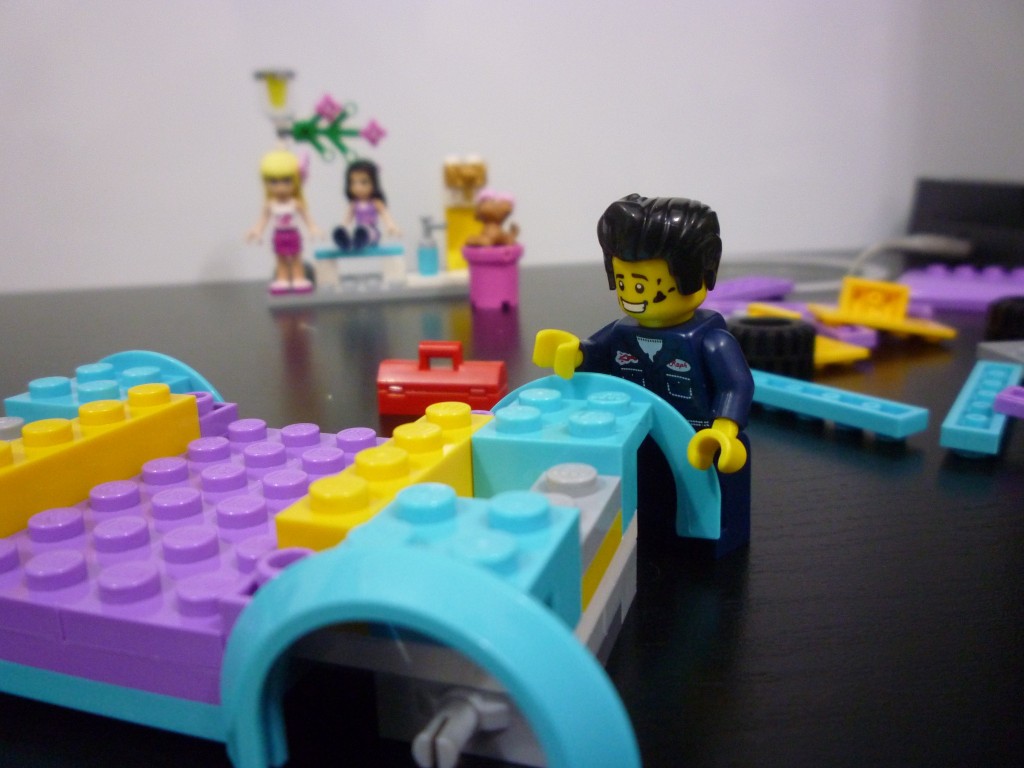 Check out those sweet azure blue finishings! These look like a beast of a car! 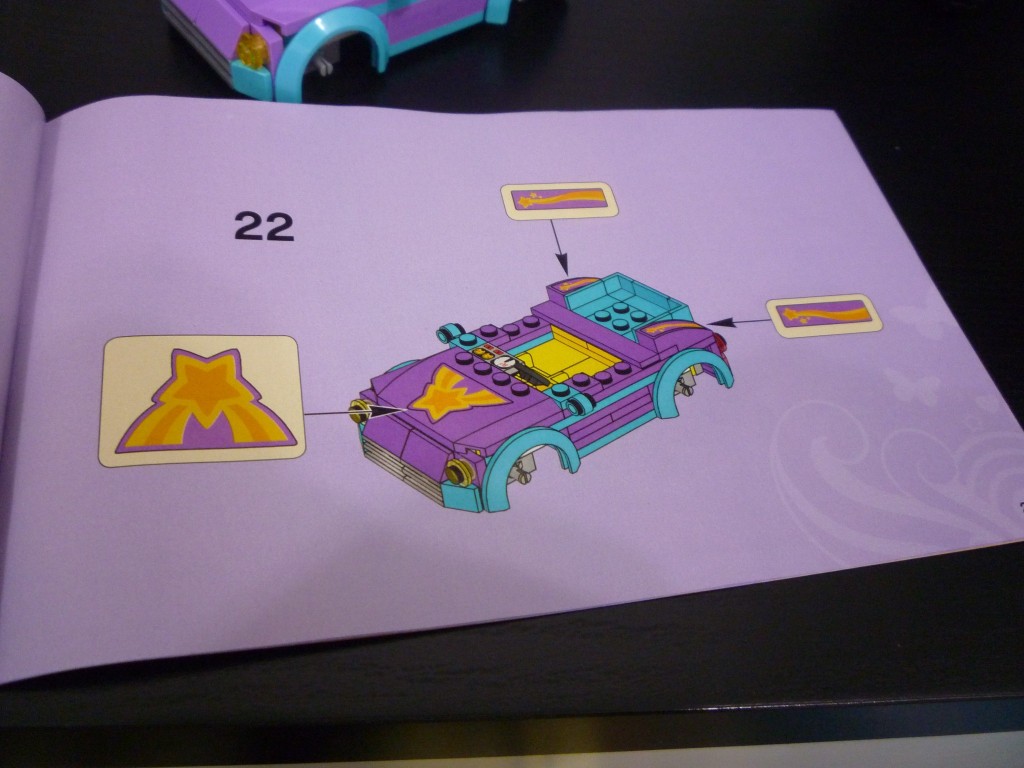 Ramos has a pretty simple schematic to follow although he has strict orders NOT to place any stickers on the car as it greatly diminishes its resale value. 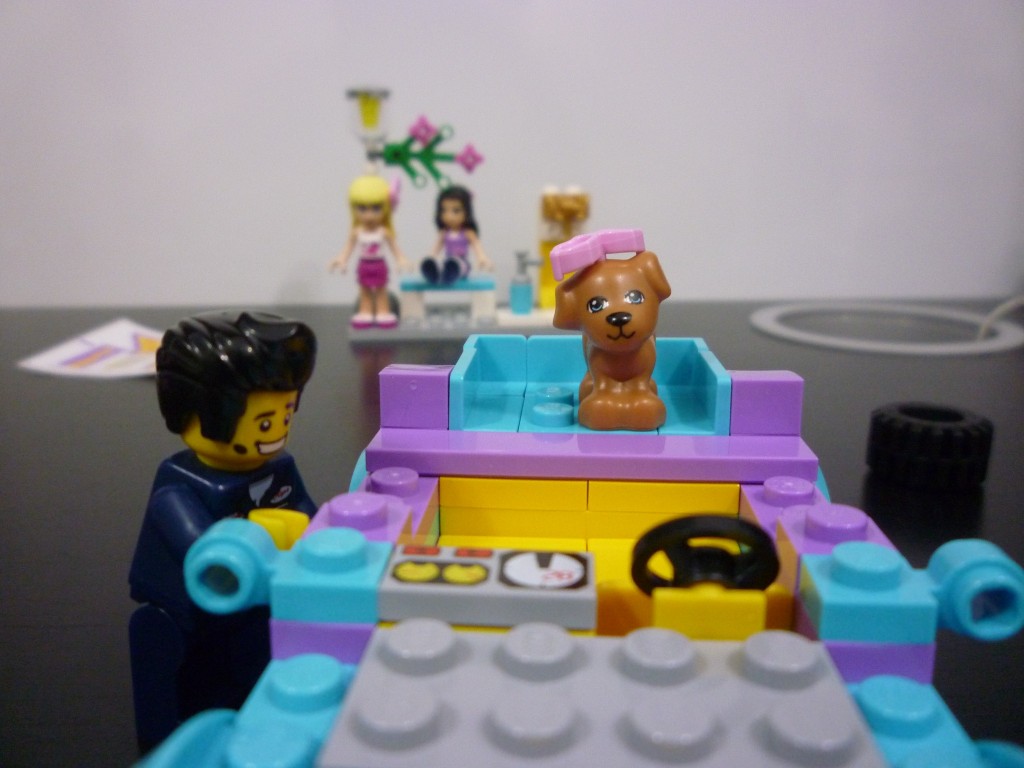 Ramos is almost done, he’s putting together the finishing touches to the convertible. Stephanie’s puppy becomes a little curious and comes along to inspect the final stages of the construction. 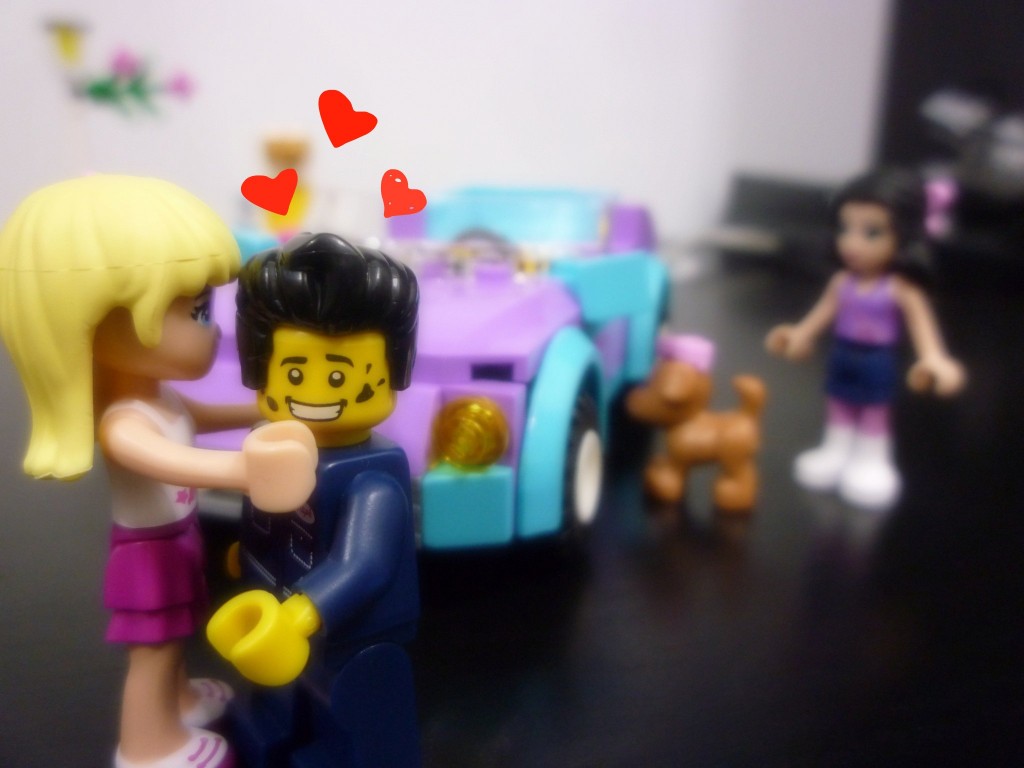 Stephanie wastes no time in thanking Ramos for all the hard work while Emma and the puppy checks out the new car. Ramos looks very pleased! 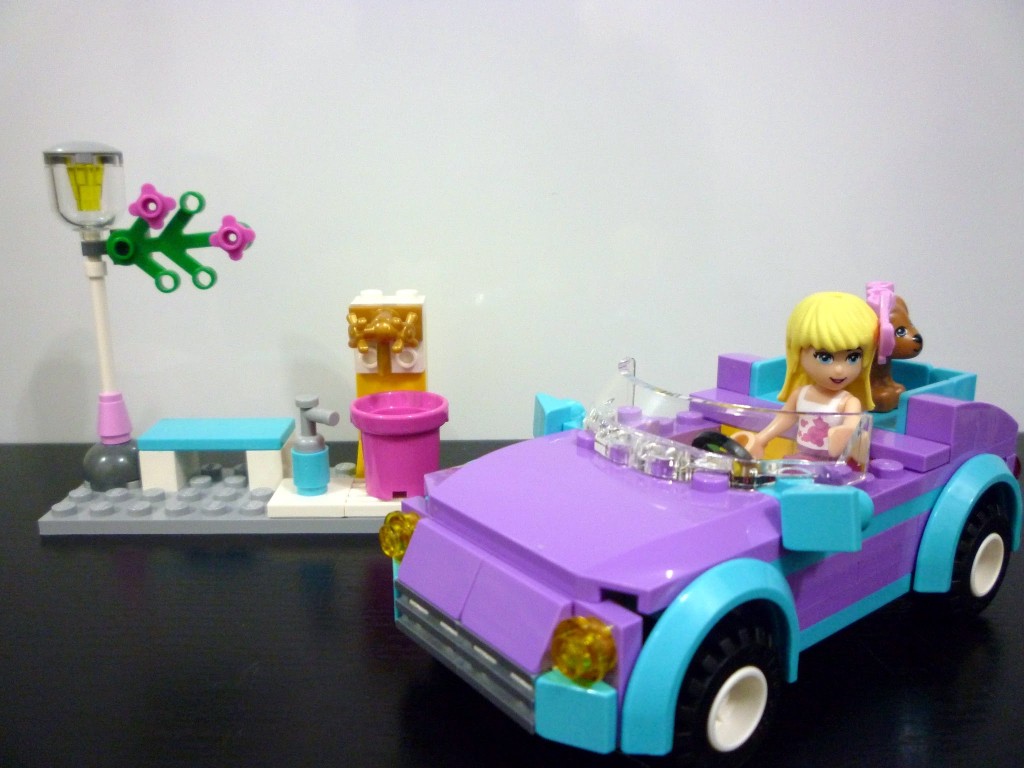 Here’s an angled view of the car and the whole set. Note that I didn’t use any stickers on the car to make it look less like a toy and more like a purple convertible made of SWAG. 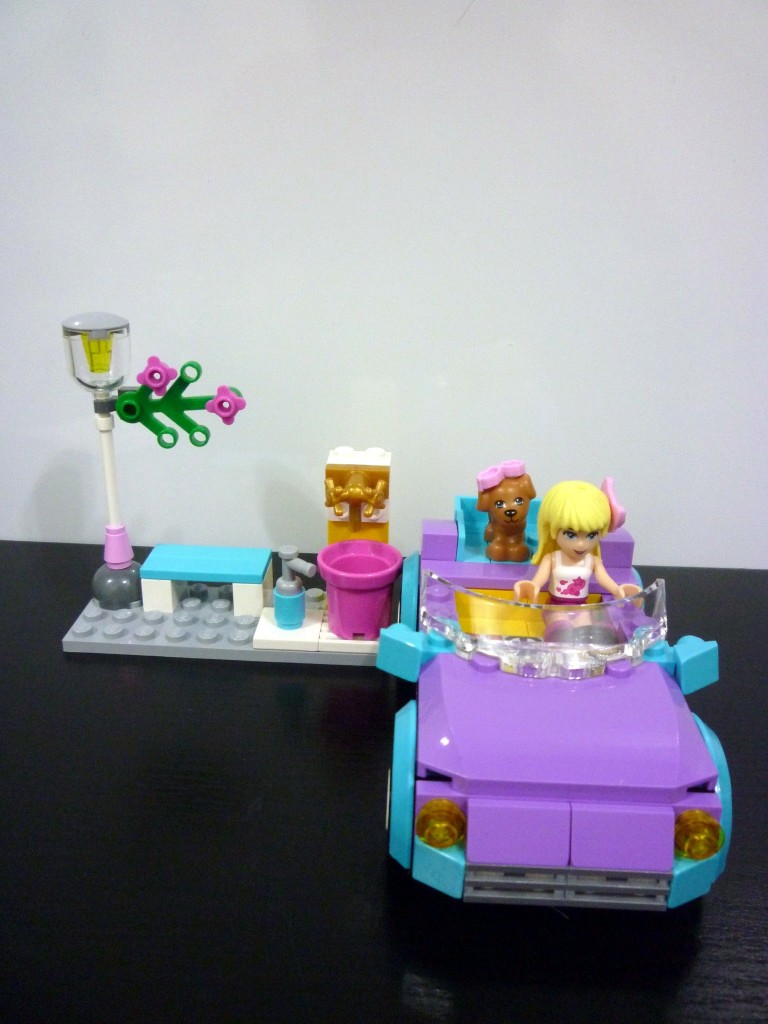 Here’s a view from the front. 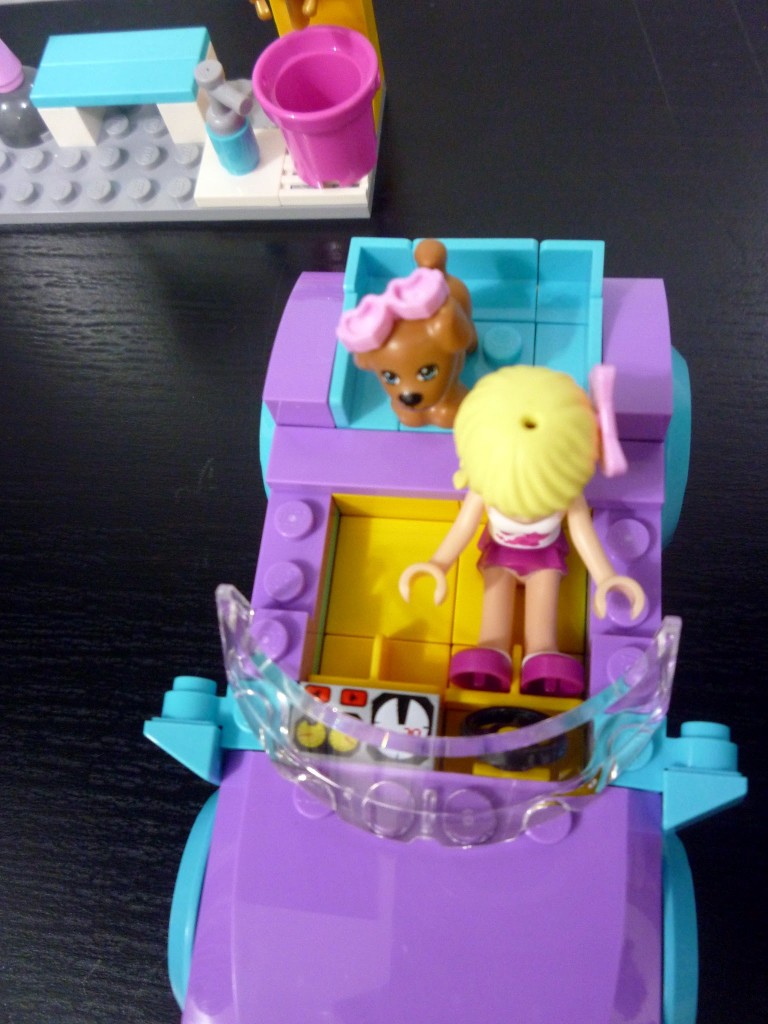 Here’s an aerial shot to show a little bit more of the interior. Funnily, Stephanie’s hands are too shot for the steering wheel. Also, that hole you see on top of her head are for accessories such as pins/sunglasses. The puppy has a dedicated compartment behind but the lack of seatbelts are incredible worrying. What happens if Stephanie has to brake in an emergency? (maybe that’s what the Heartlake Vet set is for..). There’s also space for a passenger, let’s see if Emma can fit inside the teeny convertible! 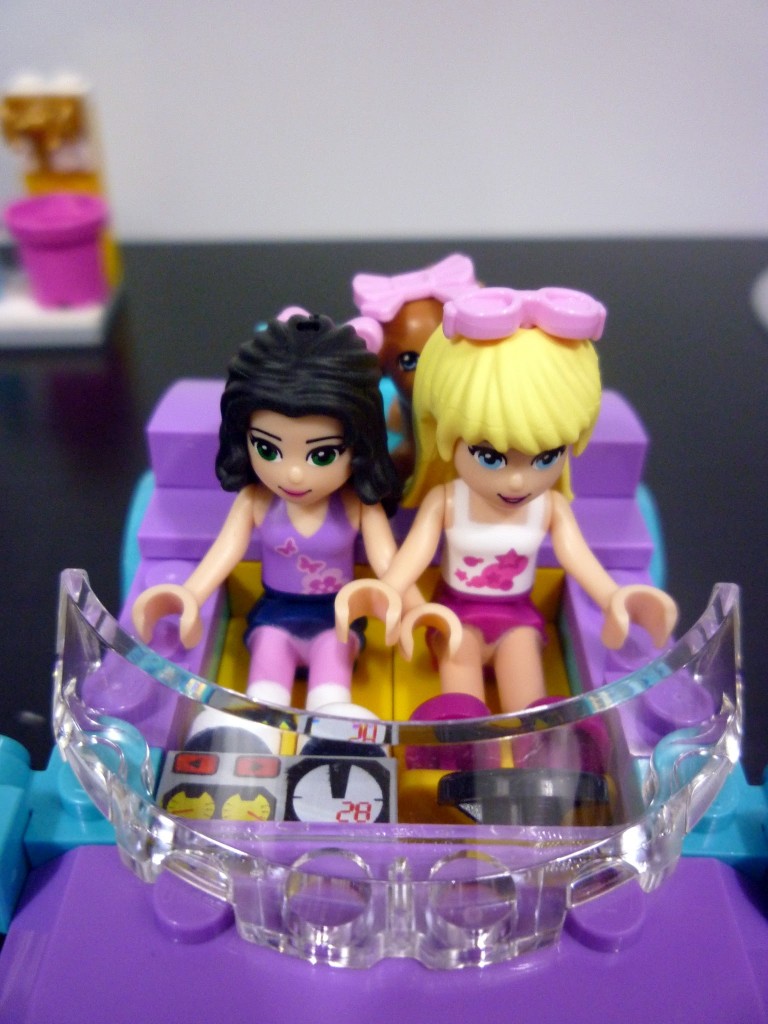 It’s a bit of a squeeze, but Emma manages to slot herself into Stephanie’s convertible. They soon go cruisin’ about Heartlake City. 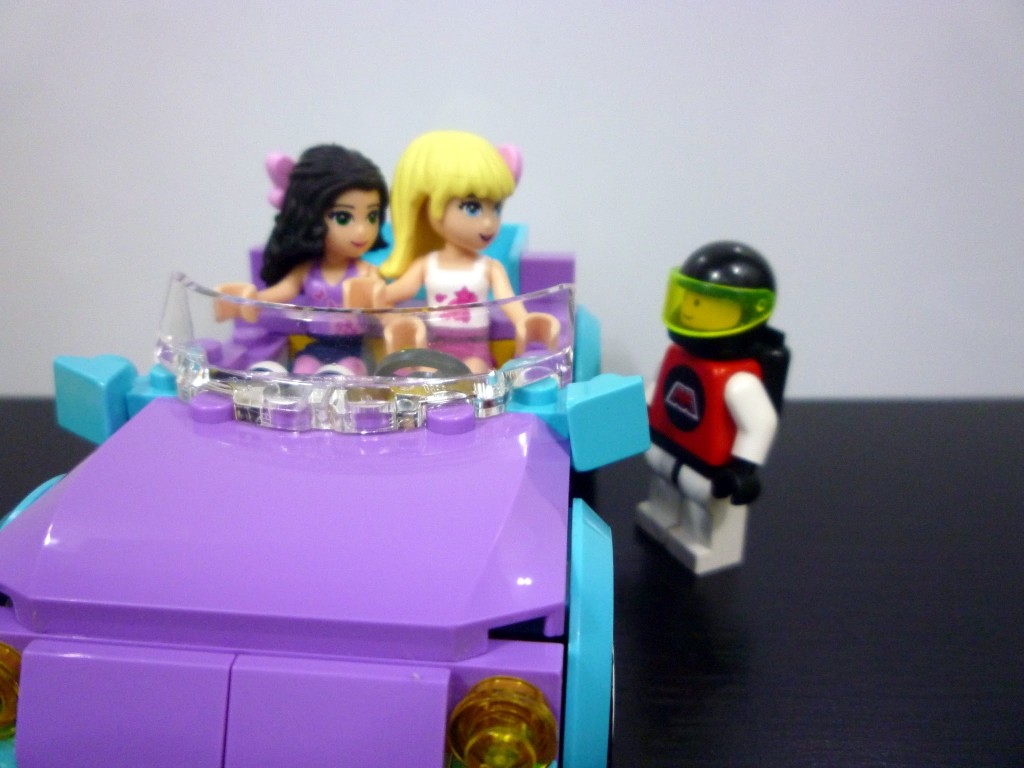 Stephanie and Emma chance upon an M-tron dude. 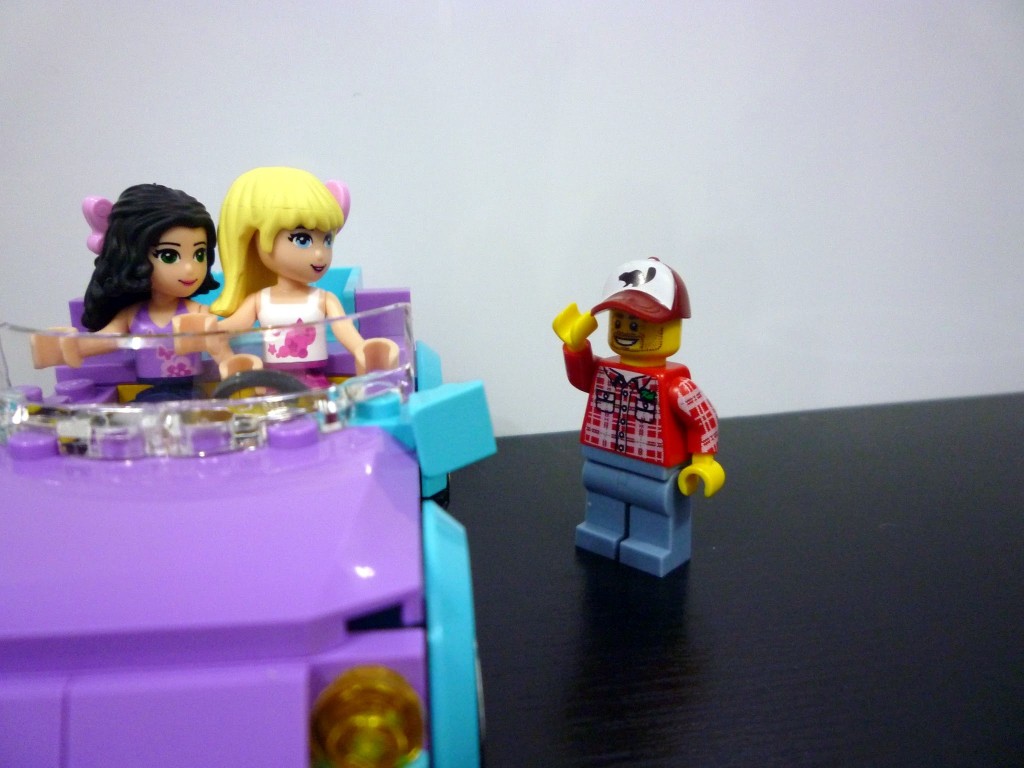 Seems to be the Heartlake gals are pretty popular around here! Oh, also in case you were wondering if regular minifigs fit into Stephanie’s Cool Convertible.. 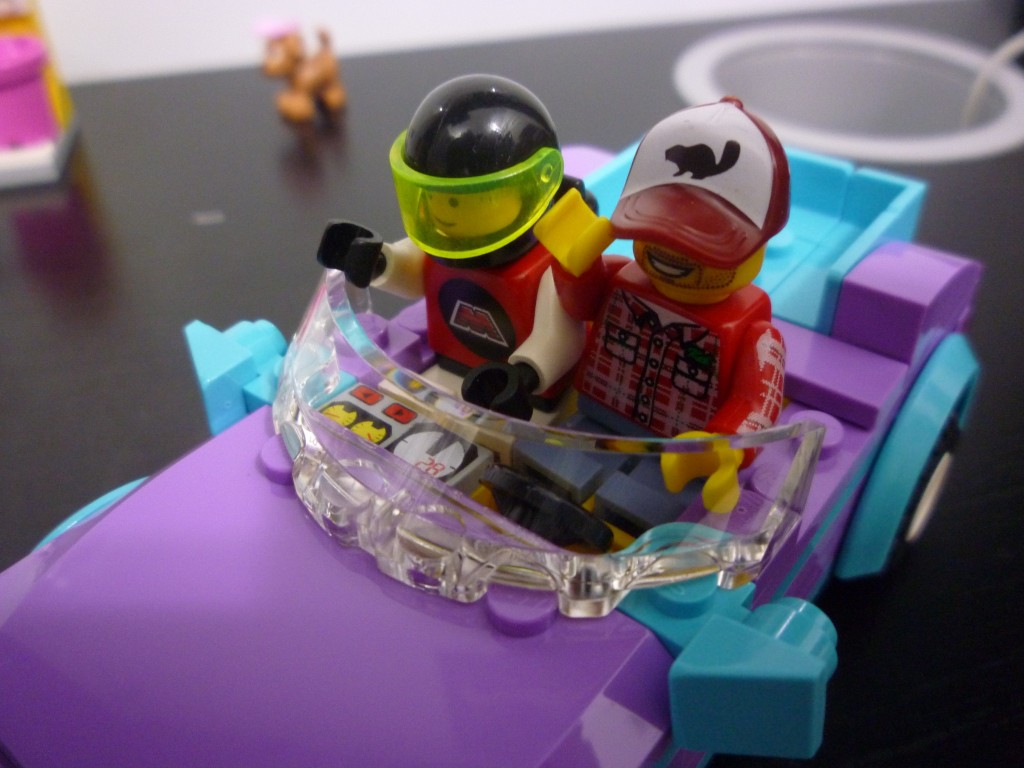 It’s a very tight fit! They can’t both put their hands down together. 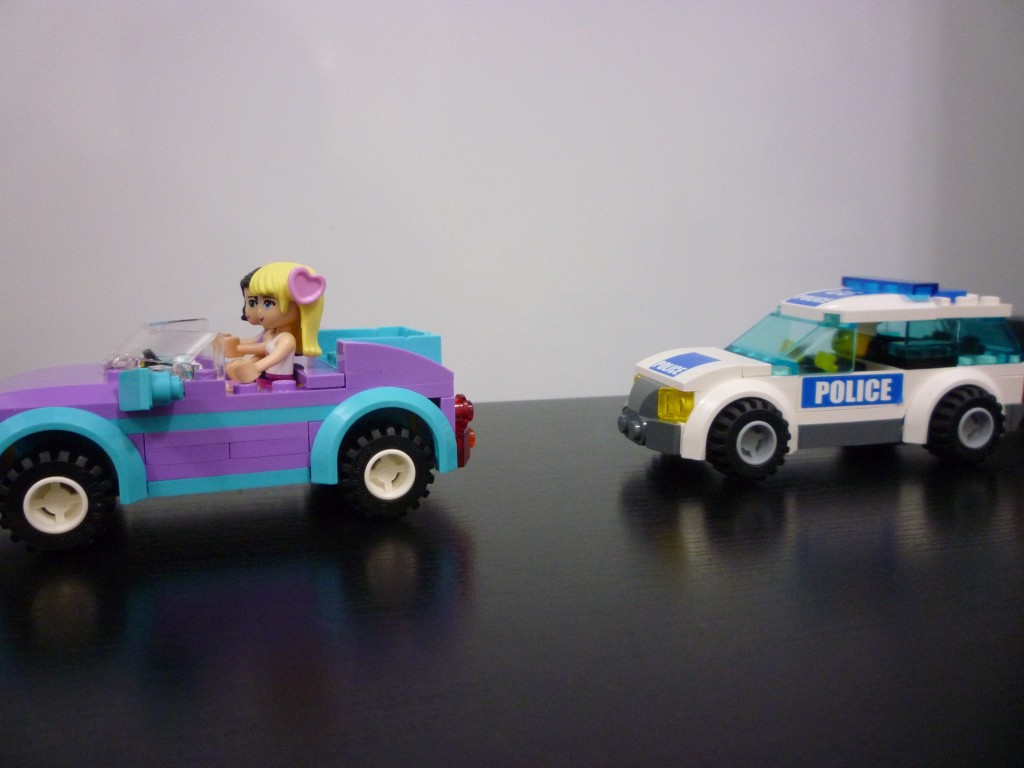 And even in Lego, speeding is never a good idea!

Final musings: Not a bad set at the RM75(or was it RM80?) price point. You get a large number of slopey purple parts, a nice purple hood and the whole convertible looks great as a whole. You also get a puppy! Having a convertible in mostly “doll-house” type sets works well as it breaks the monotony out a little, and it’s a great set if you want to get Stephanie without getting her obviously gimped bakery set. I had voucher for this, so it was an obvious buy for me, seeing as how I am so in love with Friends.

Playability: 6/10 I’m really finding it hard to rate playability, since this is obviously designed for girls and as we all know, boys don’t play the same as girls. You get a neat bunch of accessories which I suppose is a lot of fun if you’re into dressing up minidolls, but for me, there wasn’t much playability in this. I’m not one to role-play washing a Lego puppy.

Design: 7/10 The car looks and feels great from a minidoll scale, although some minor flaws like the steering wheel being too far away irks me a little. I have to give props for the colour scheme, they totally nailed how the girly convertible colour scheme.

Price: 8/10 RM75 for a neat bunch of car parts in the funky new colours is good bang for your buck. You also get a bevy of hair accesories AND A LEGO HAIR DRYER. What more could you want!!?

Minifidolls: 7/10 Stephanie looks great, I like her shoes as mentioned previously. She looks plain and simple enough to generate that wholesome and sweet girl next door look. Her blonde hair piece is particularly cool!

Parts: 8/10 Lots of cool colours, lots of cool accesories AND a puppy! You also get another mobile phone tile which I don’t think I mentioned.

Total: 36/50 Not too bad if you’re thinking for a slightly more expensive Friends set that isn’t some sort of doll-house. I opted for this, because I refused to pay full price for the grossly overpriced Olivia’s Tree House or the makeup place and I wanted the blonde minidoll too. Then again, it didn’t cause me much pain as I had a whole load of vouchers that I had to use. I would say.. a buy if you’re into Friends, but if you’re not, you can probably skip this and not miss out on much.

More outtakes and photos from Stephanie’s Cool Convertible on my G+ photo album.