My second Super Heroes set so far and my very first one with the World’s Greatest Detective, Batman! I got this during my last Australian trip from Target when they had a 20% off Lego sale. Not exactly the cheapest option available but still way more affordable and easier to stomach than the outrageous price they’re charging for this set in Malaysian toy stores. 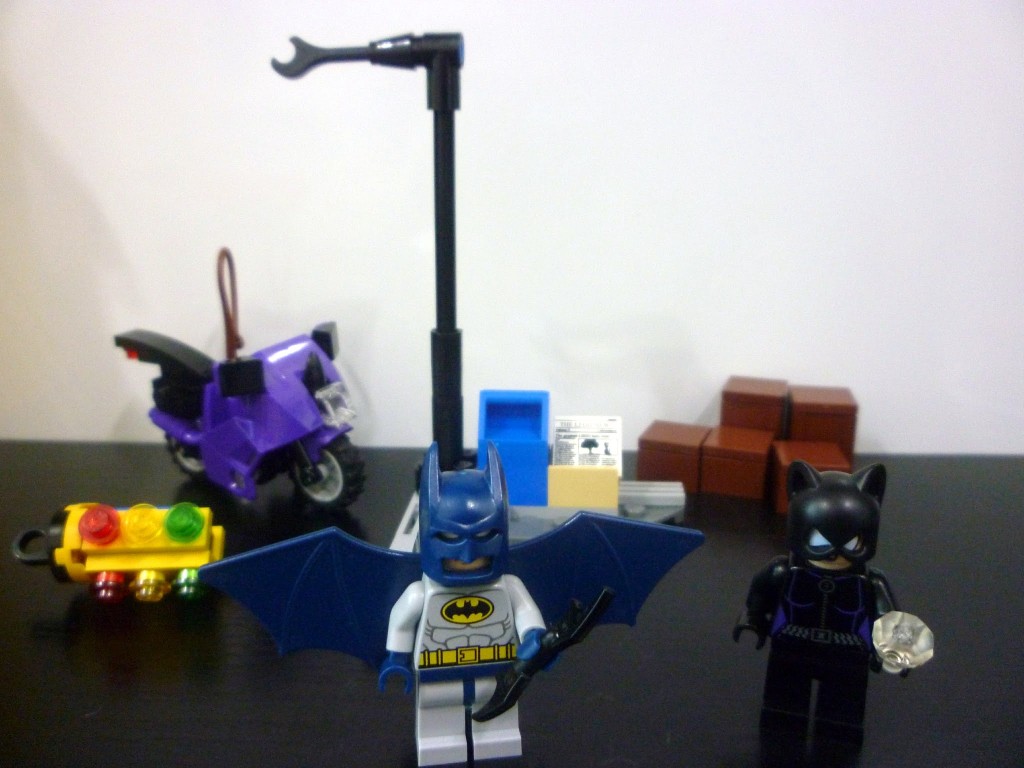 Here we go, alongside the upcoming Captain America set, this is the smallest Superhero set you can get from Lego this year. It’s basically a cheap and easy way to get your hands on Batman and as a bonus you get Catwoman who’s exclusive to this set for now. Coming in at 89 pieces, you’re really buying this set for the minifigs – the rest of the parts are mostly unessential and personally I think downright negligible. Anyway, on to the minifigs! 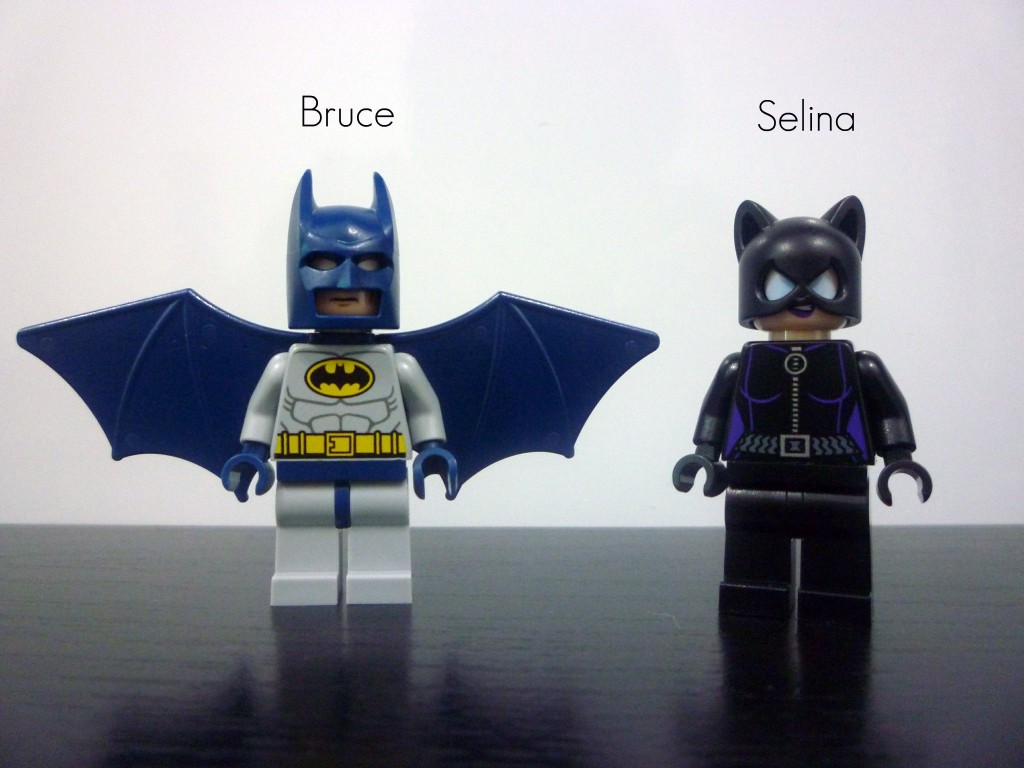 Not a bad looking couple. Let’s get on with the star of the set, the sultry cat burglar herself, Selina Kyle aka Catwoman. 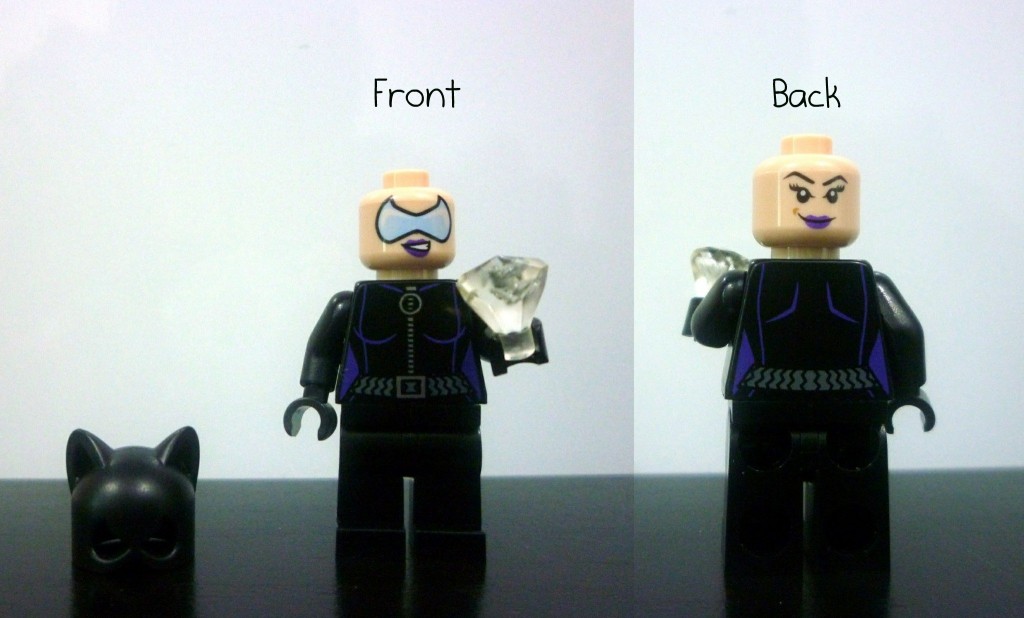 Here’s Catwoman unmasked. She’s got the usual two sided face going on, with one sans her goggles with a smug smile on her face. The Catwoman mask is pretty sweet accessory to have. What I really like about this minifigure is that it addresses the fact that female minifigs usually lean towards the chubbier side of things. What Lego has done here is to cleverly use the design of the torso to make her look as if she has a more hourglass shape to her by tucking in her waist. It’s one of those things that you can’t unsee once you notice it. You also get a diamond piece, which I assume is the object of Catwoman’s burglary. I also like her purple lipstick, very classy!

Here’s Batman with a very impressive wingspan, which I guess allows him to glide or fly. This is my very first Batman minifig, so I’m pretty impressed by it. They’ve managed to capture the look of his helmet/mask pretty well, with the only caveat that the minifig head suffers from the headband effect (used to whiten the eyes of his mask) which makes Bruce without his mask look like some sort of karate kid of sorts. Wait, fly you say, how can he-?

Oh, Batman has a jetpack of sorts! Really cool! Batman also comes with a Batarang to knock Catwoman to her feet I guess. Nice details on the jetpack with the light blue round bricks to make it look all future and clean energy looking. The jetpack also features a “hand claw” piece, which I removed because I think Catwoman looks better with claws. 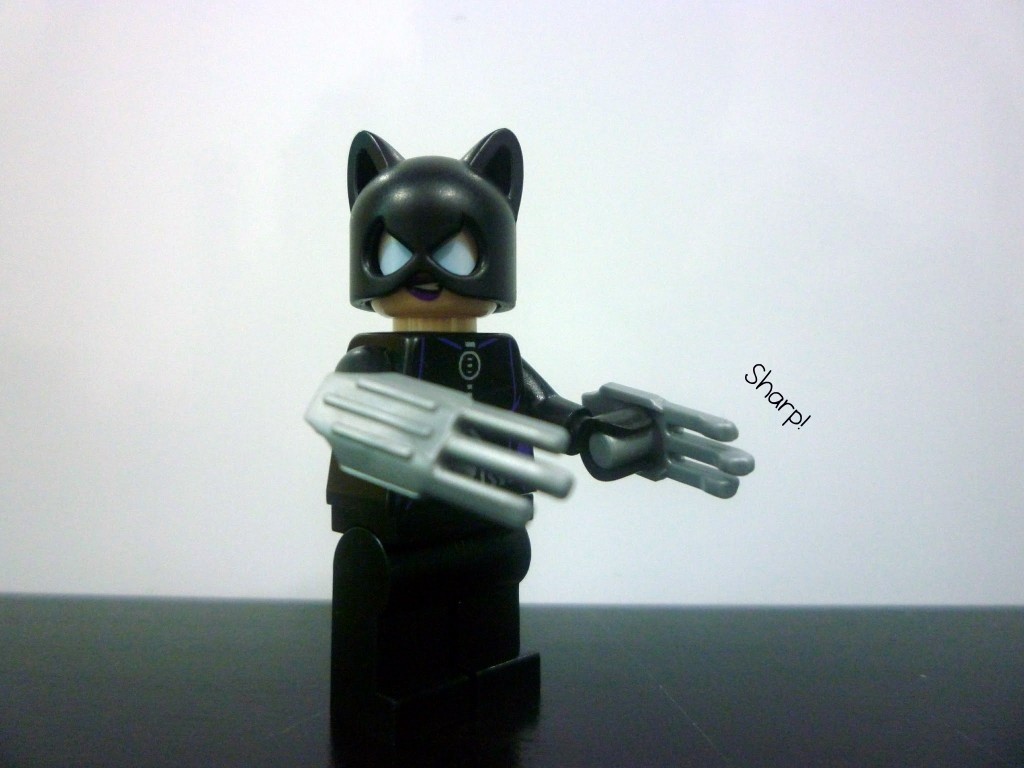 Lego were nice enough to include two claws, so I’m going to use this as Catwoman’s weapons in this set. 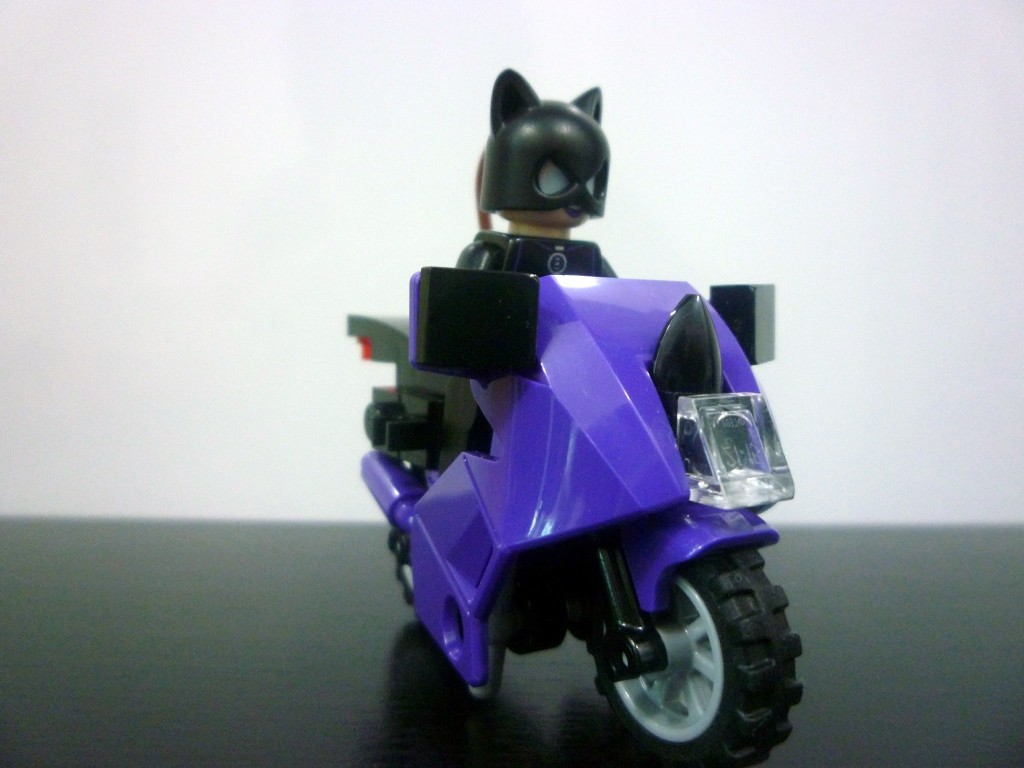 So Batman has a jetpack, what does Catwoman have? She has a Catcycle of course which Batman Chases all around the City as the set’s title implies! It’s nice and purple to go with her lipstick I guess? 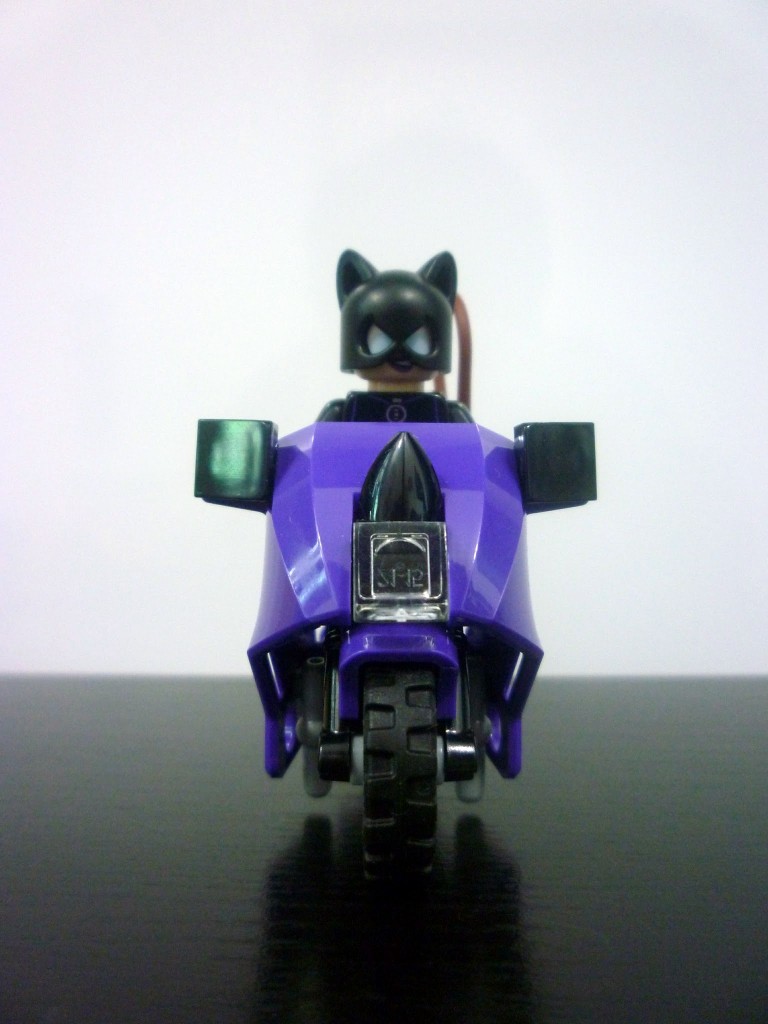 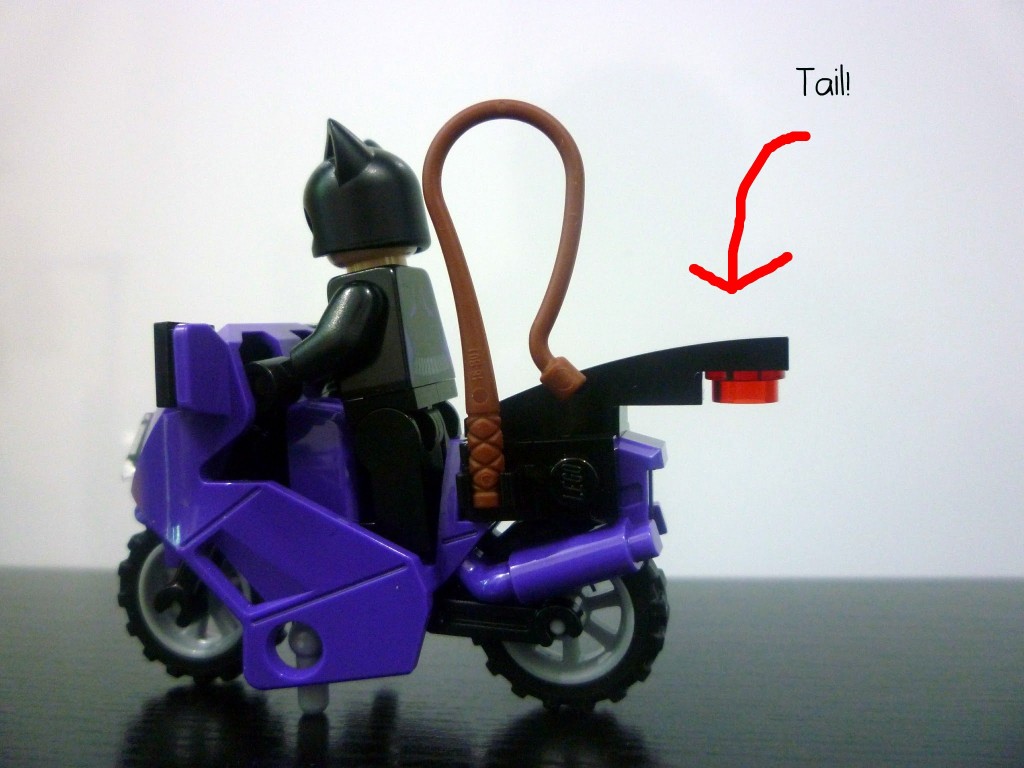 From the side, you get to see how much more catlike the designers wanted to make the Catcycle by adding a little tail behind. We also get a place to store Catwoman’s whip. What does she use her whip for? One can only imagine. 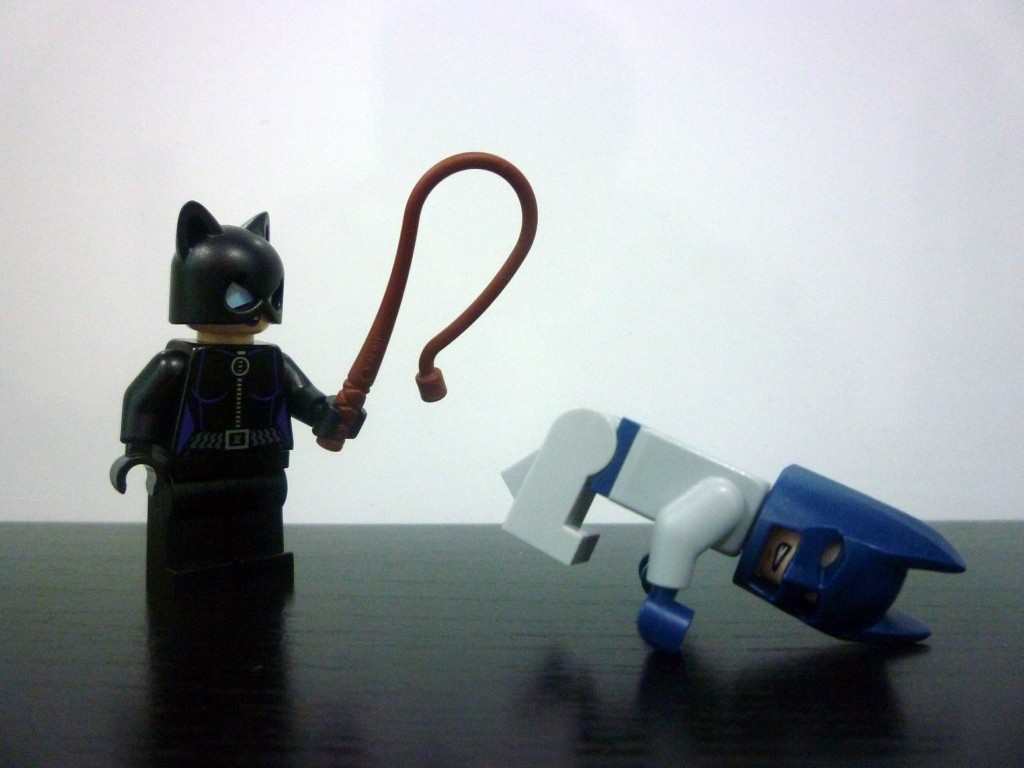 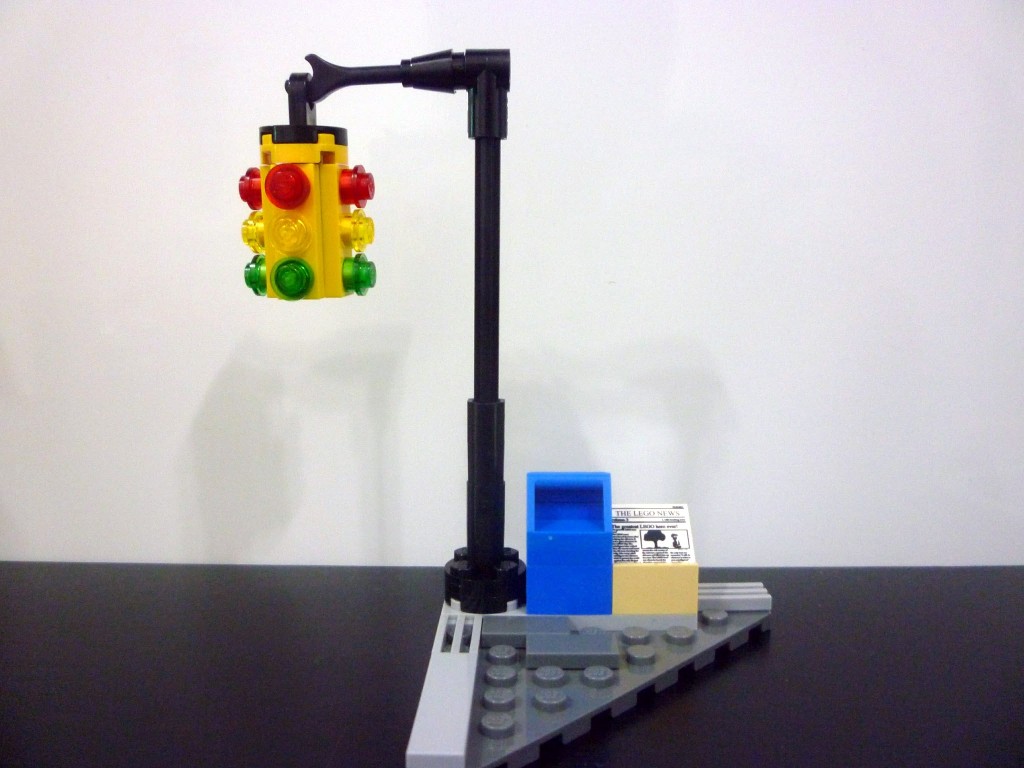 On to the parts of the set that aren’t minifigs, we get a quaint little street corner. I suppose this is part of the city that Batman is chasing Catwoman through, and we also get a play feature of sorts built into this. So let’s see, we get a traffic light, a mailbox/litter bin and a newspaper stand and some obligatory street vents. 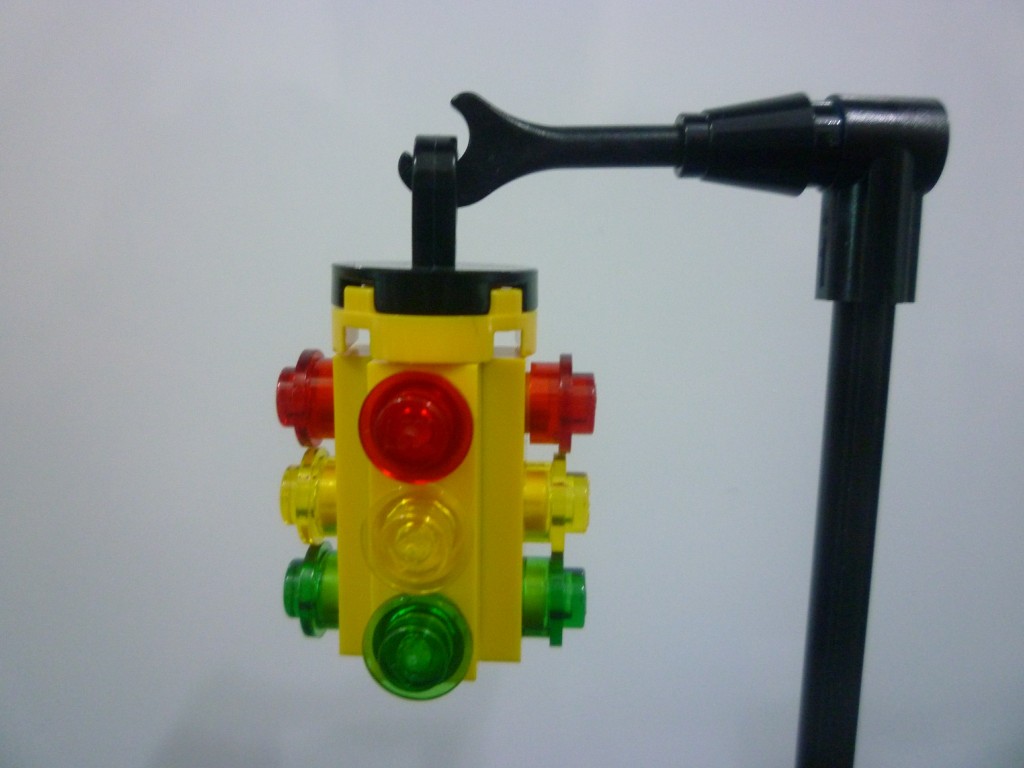 Here’s the play feature, the traffic light which was lazily designed as it’s only three sided. Bleh. As you can see, it teeters dangerously, supported by only a wrench piece aka IT FALLS OVER EASILY. My best bet is that it accentuates the ferocity of Batman’s high speed chase of Catwoman across the city. I don’t like this because it topples over every time I try to move the set around. 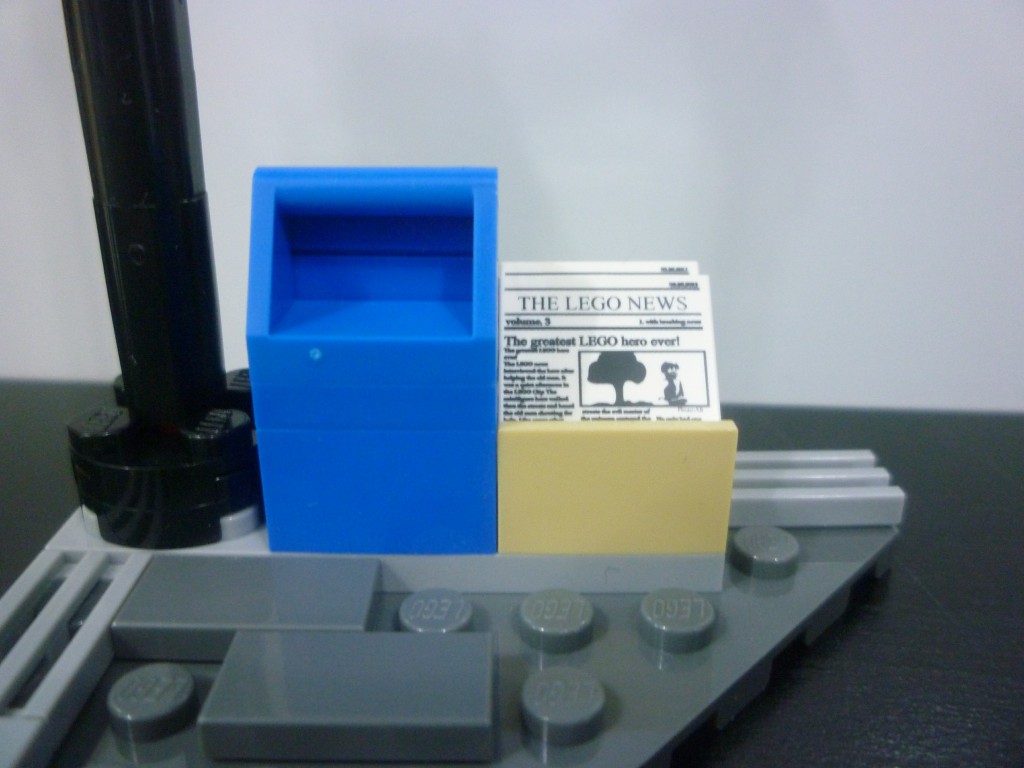 Here we have a trash bin/mail box to make it look more like a street corner (?) as well as a newspaper stands. We get 2 newspaper tiles which is always nice to have, but meh, I thought this was pretty shabbily put together. Plainly put, this street corner is BORING. 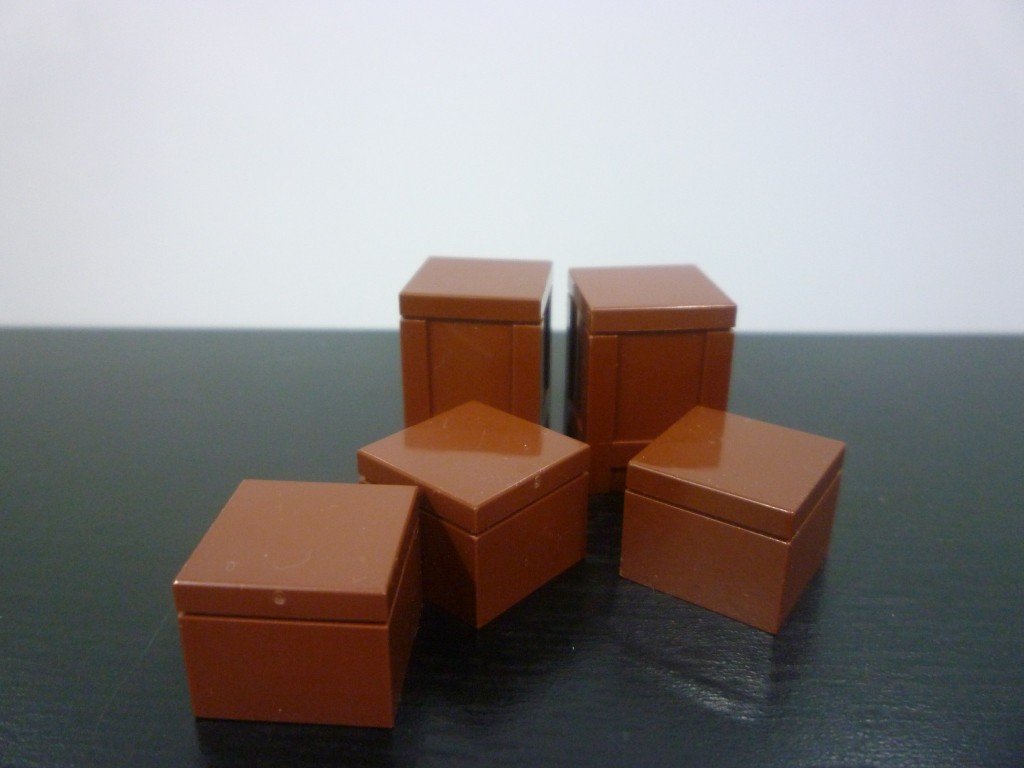 The most puzzling part of this whole set is this bizarre collection of boxes or crates that Lego hastily dump here I guess to raise the piece count and make it ‘worthy’ of the set’s price. Again, these are plain boxes. We get 2 proper crate pieces, but the rest are 2×2 brown bricks topped off with brown tiles. That’s it. Seriously. 5 boxes. 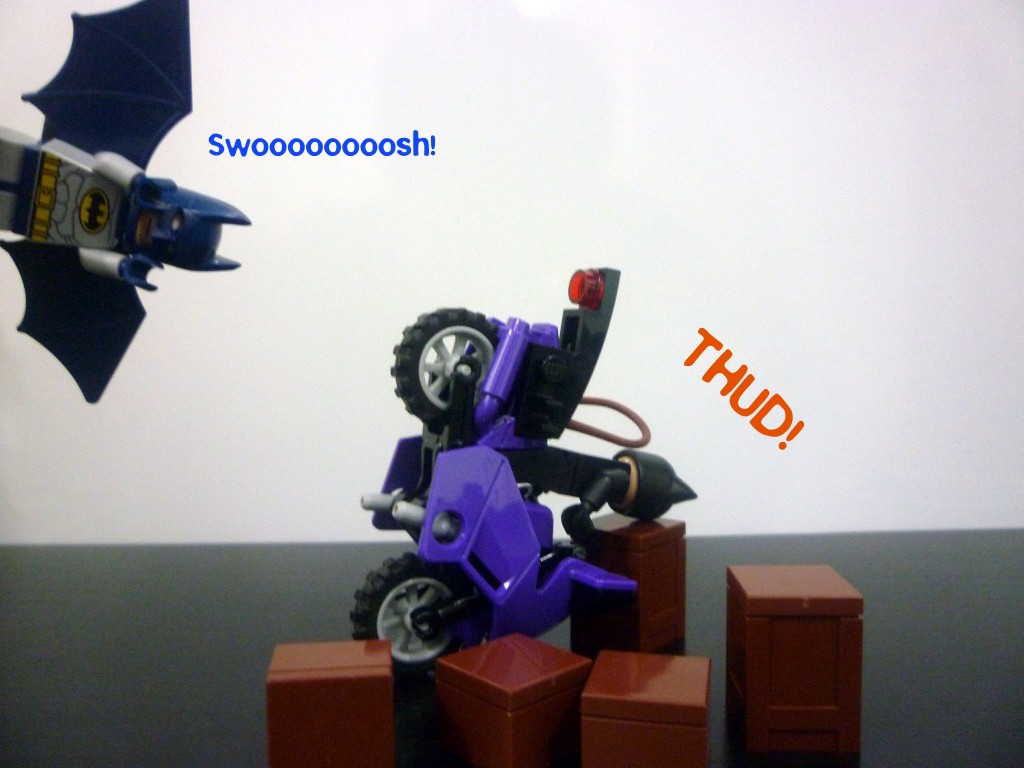 I put a lot of thought into the reason for their existence and this is the best I could come up with. *shrugs* 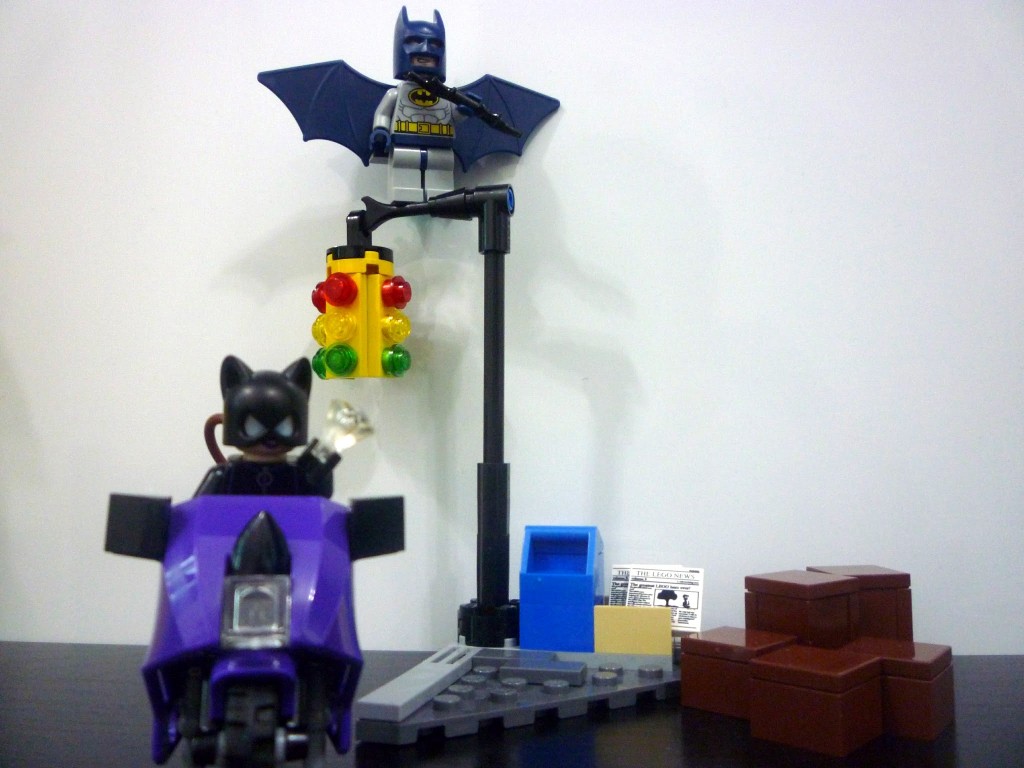 So there we have it. I decided to have a little fun with the minifigs so if you’re wondering what Catwoman would like in different hairstyles, scroll on!

I used whatever female hairpieces I had on hand at the time. L-R Olivia’s hairpiece, Stephanie’s hairpiece, Narcissa Malfoy’s hairpiece (the best one so far) and the Bunny Man from Series 7. 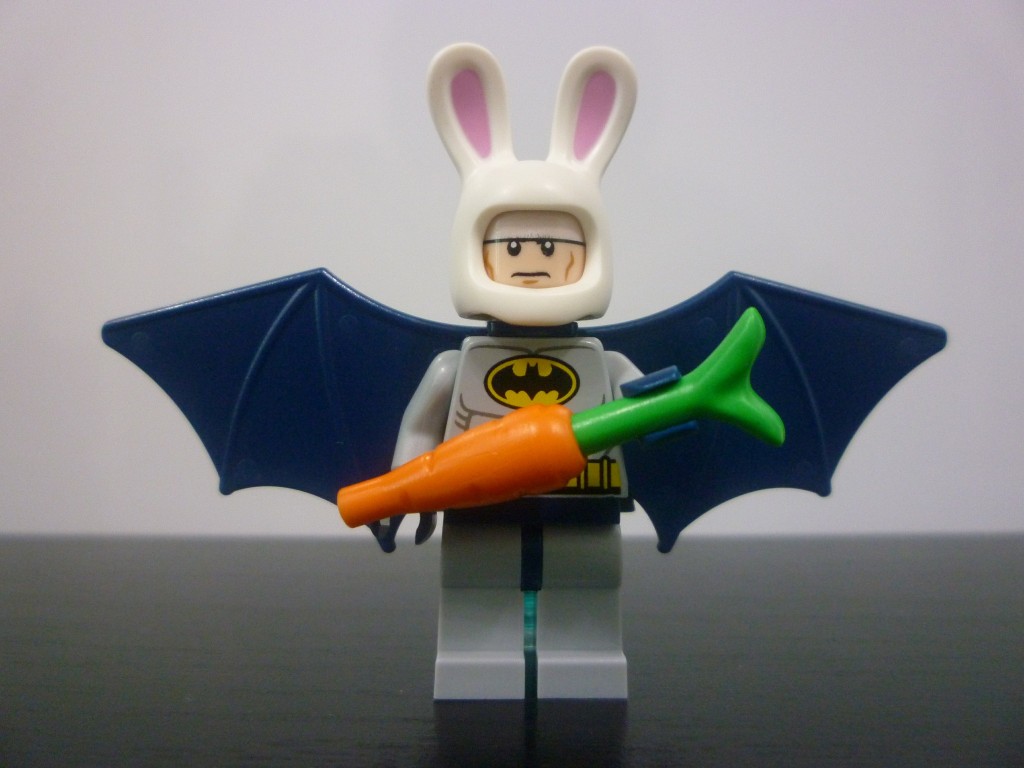 Speaking of Bunny Men, here’s Bruce Wayne in a bunny costume. He doesn’t look too happy…

Final musings: It’s not a bad set when you look at it from a minifig standpoint and based on its US RRP of $12.99, I’d recommend it in a heartbeat for the value you’d get from the minifigs. But we don’t live in the US, and here in Malaysia it’s a whopping RM80. That’s just bad value right there, even from a license theme viewpoint. Overall, not too impressed by the lazily put together street corner. I just don’t see the value added to the set other than a bunch of weird items thrown together.

Playability: 5/10 The Catcycle is nice and good fun pushing around your table, but the traffic light that falls down… That’s not really more fun. You’d have more fun playing around with the minifigs on their own.

Design: 5/10 The Catcycle is pretty nicely designed, and credit to Lego for trying to make it as feline as possible. Batman’s jetpack is alright, no complains there but the street corner. Okay so it does look like a street corner, but the boxes is just plain lazy.

Price: 6/10 RM80 for this set is just daylight robbery, but that could be said of most Lego sets here. I rated this a 6 because I got this for just shy of AUD$20, which comes up to about 60 bucks. I still think I overpaid, but since it’s a licensed set, I’ll close one eye. If I were to pay Malaysian price (which I will never), I’d flat out give this a 3/10.

Minifidolls: 9/10 The only redeeming thing about the set (and really the only reason you would even consider getting this) is the minifigs. Batman and Catwoman are greatly designed and would look great on display if you’re just in it for the minifigs. Batman’s wings are nice, but I would’ve liked it if they included a cape for Batman. Batman without a cat seems weird. Catwoman is also great, I like the optical illusion they try to employ to make her look skinnier.

Parts: 6/10 Well we get 2 claw pieces and Batman’s wings which can be used for other minifigs as well. The 2 newspaper tiles are nice too but other than that there’s nothing much to shout about. Oh yeah, there’s the bike too!

Total: 31/50 It’s a pretty expensive set which doesn’t offer much value for money but it is also the cheapest way to get Batman since we don’t get access to polybags here in Malaysia. It doesn’t stand out parts-wise and just feels like a boring set when you put everything together. Quite a shame, since the Superman set which is only slightly more expensive has so much more going for it. 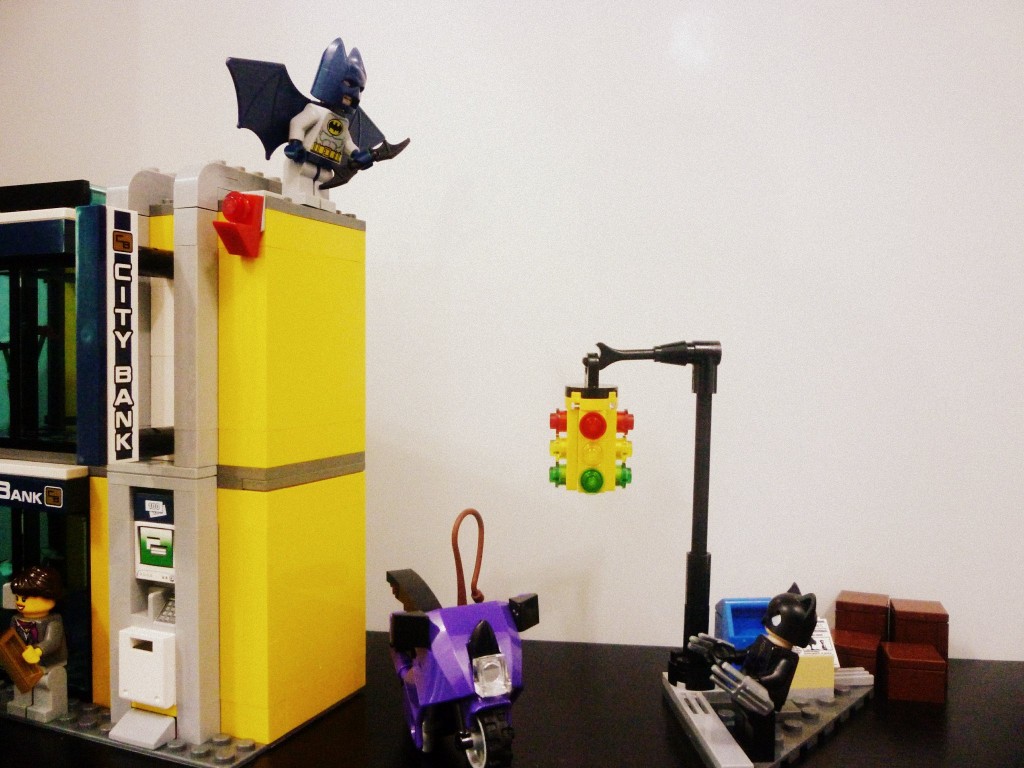