Well hello again! Hiatus usually means work which has thankfully wound down a little, allowing me to get back my building. Here’s a review for the highly anticipated Superman set!

Superheroes is officially not available (yet) in Malaysia however that doesn’t prevent ardent Lego fans from eagerly importing sets from the states. I’ve had my eye on this set as soon as I lay eyes on it simply because it’s Superman, Wonderwoman and Lex Luthor’s debut in Lego form. The fact that this is also a mech makes this a very sweet deal! 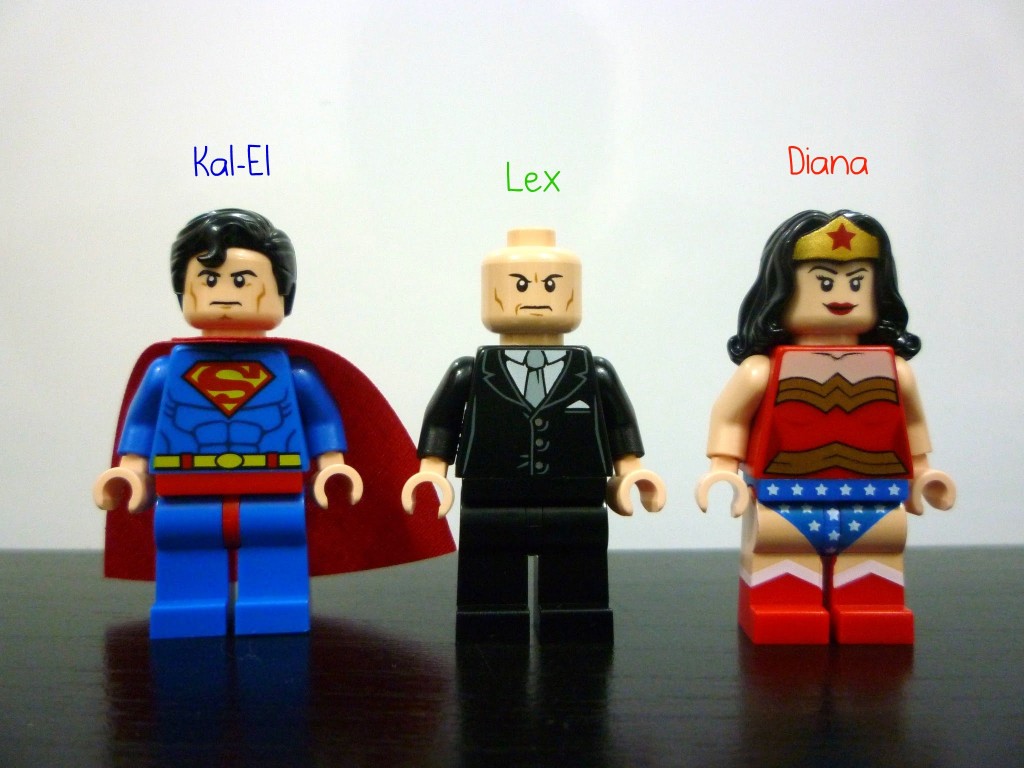 Here we have the iconic minifigs themselves. 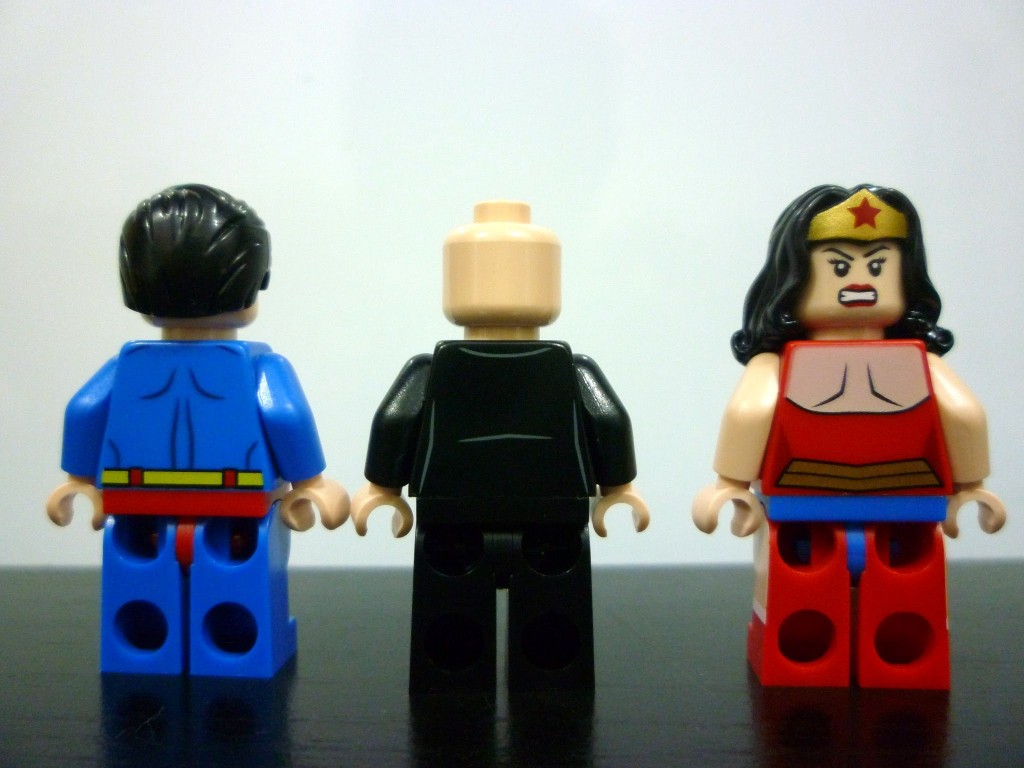 The last Son of Krypton, he goes by many names – Clark Kent, Superman but he will always be Kal-El. His cape comes in a separately packed cardboard sleeve. Printing and attention to detail is incredible down to his little hair bit that falls down his forehead. Perfect transition from comic book to ABS plastic for Superman.

Lex Luthor, aka’s Superman’s archnemesis and childhood friend. Bald head and crisp suit reporting for duty in one of the world’s most iconic villains debut in minifig form. He’s also got a stern look on his face, like he’s grinding his teeth, perfect for that scheming-to-finally-kill-Superman look. Not bad, but nothing to shout about.

Diana of Themyscira is everyone’s favourite Amazonian demigod better known as Wonder Woman. Also pictured in the photo is her invisible jet. Now… Wonder Woman is a bit of a wild card; she’s got a really cool headpiece complete with her iconic (but non removable) tiara. Her Lasso of Truth is okay, its golden and squishy but looks  kinda weird. Body printing is cool and all but the way its printed (and because minifigs are blocky) make her look extremely fat. Thunder thighs doesn’t even begin to describe how plump she looks. Which is a shame. Oh also, it appears that her legs are made in China and not of the same quality as Supes and Lex’s legs (BOO, Lego!) so really… quite disappointed with WW.

That was a lot on the minifigs! Well, simply put, this is quite a minifig centric set. Sure Lex’s Power Suit is neat and all, but the allure of the DC trio being finally made into Lego is going to be the biggest reason any Lego or comic book fan will want to pick this set up.

Speaking of Lex’s Power Armour… we’ve got behind the scenes photos of Mr. Luthor himself constructing his exoskeleton. 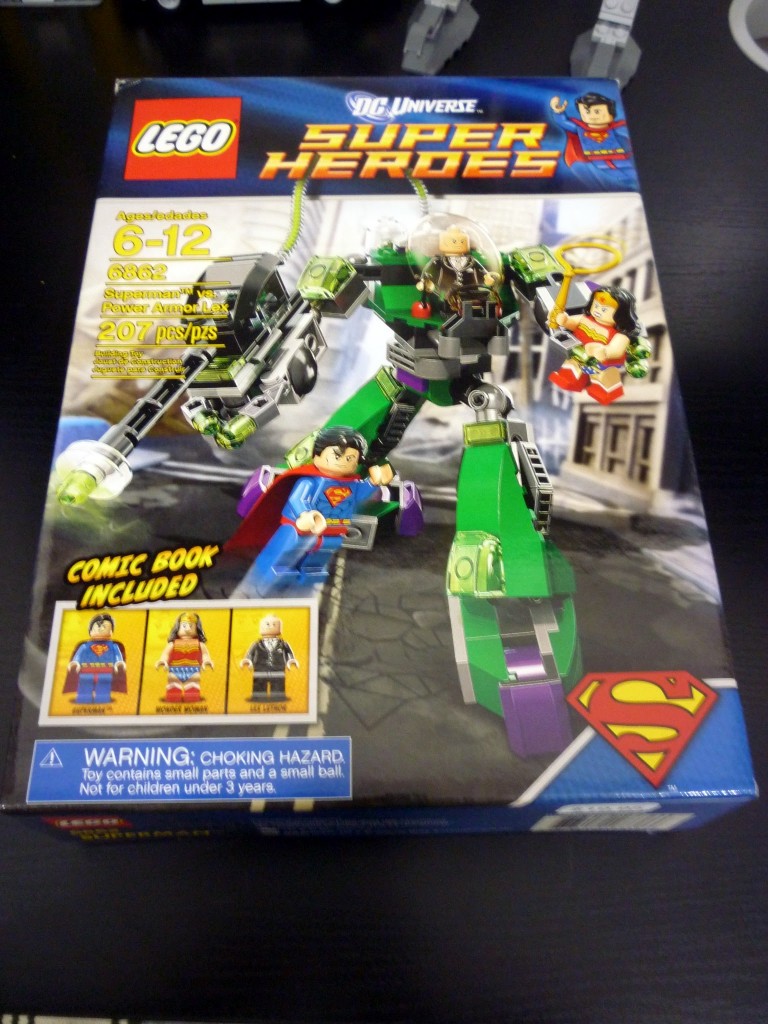 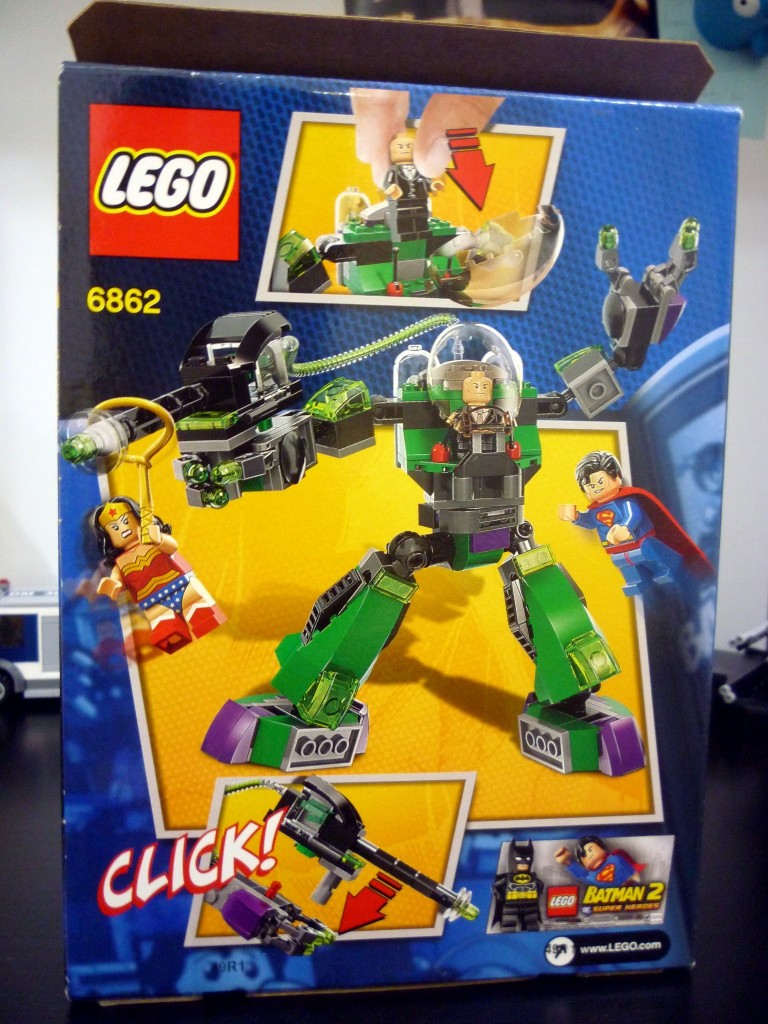 Obligatory box shots so you know what to spot when the sets finally get here! So much excitement! I really like the colours of the box art. I think Lego’ve really stepped up their game when it comes to box design. 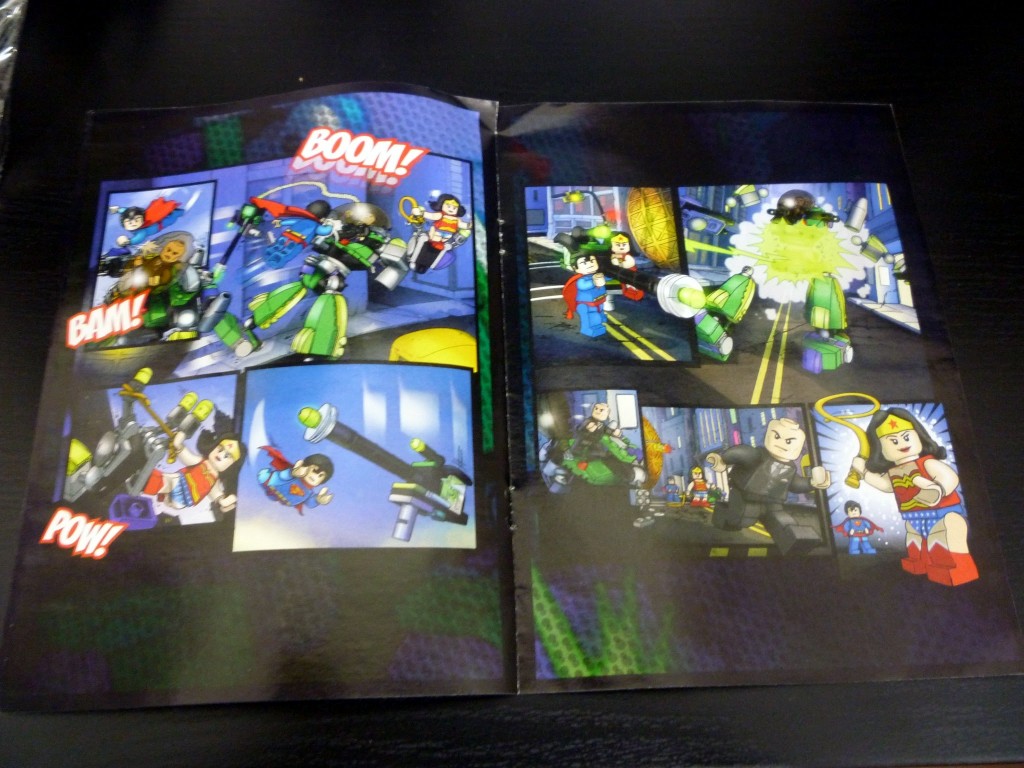 We also get a neat little dialogue-less comic book featuring the characters in this set! It’s pretty cute! 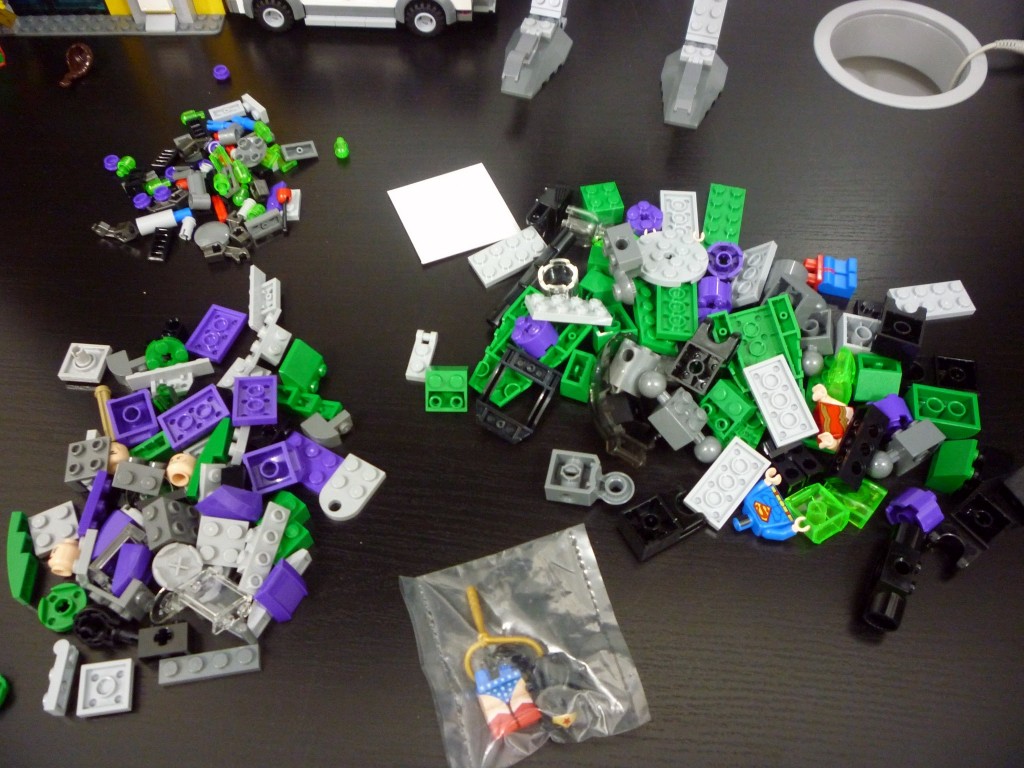 Here are the bags opened! Since it’s a small set, Lego didn’t bother with numbering the bags. Note that Wonder Woman’s Lasso, Hairpiece and Legs are in a separate plastic bag which almost always means that they came from China and are of inferior quality! Also, you can tell if the leg pieces are legit or not from the Lego printing inside, which was missing in WW’s making me 100% sure this came from China. Meh. Anyhoo, let’s get to Lex building his power armour, shall we? 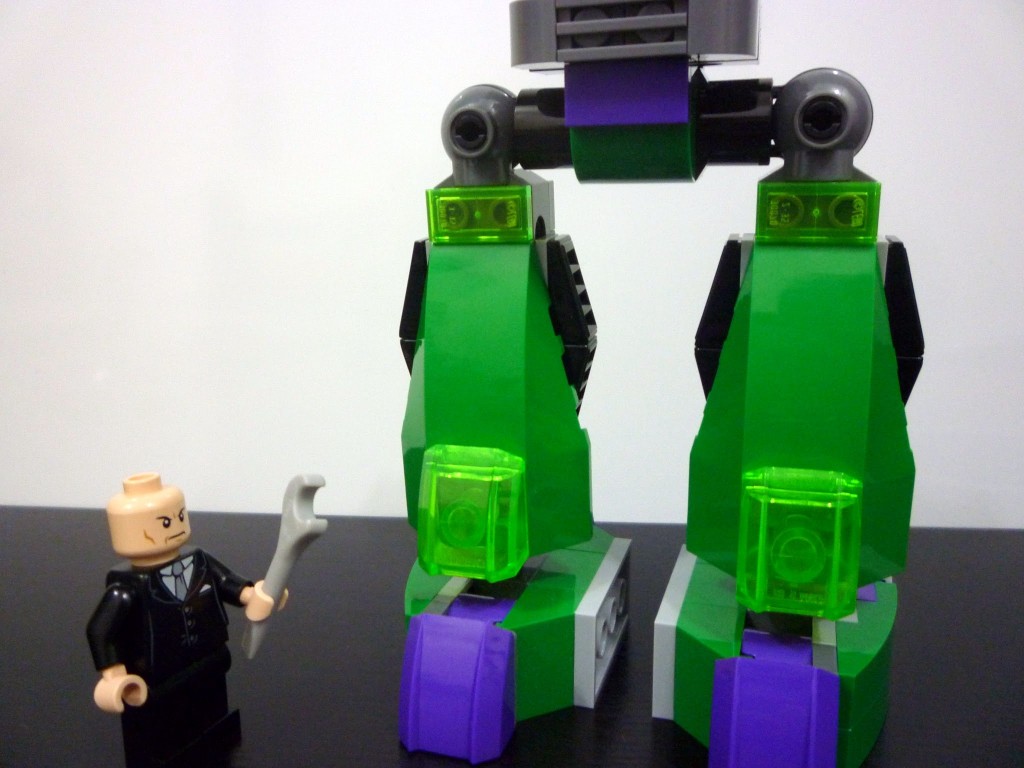 First up, we build the legs. I really love the colours used in this mech. Lots of purple, green and translucent green widgets make it a stunning visual package overall. All Lex took was a single spanner. Eat that Tony “I built this in a cave” Stark. 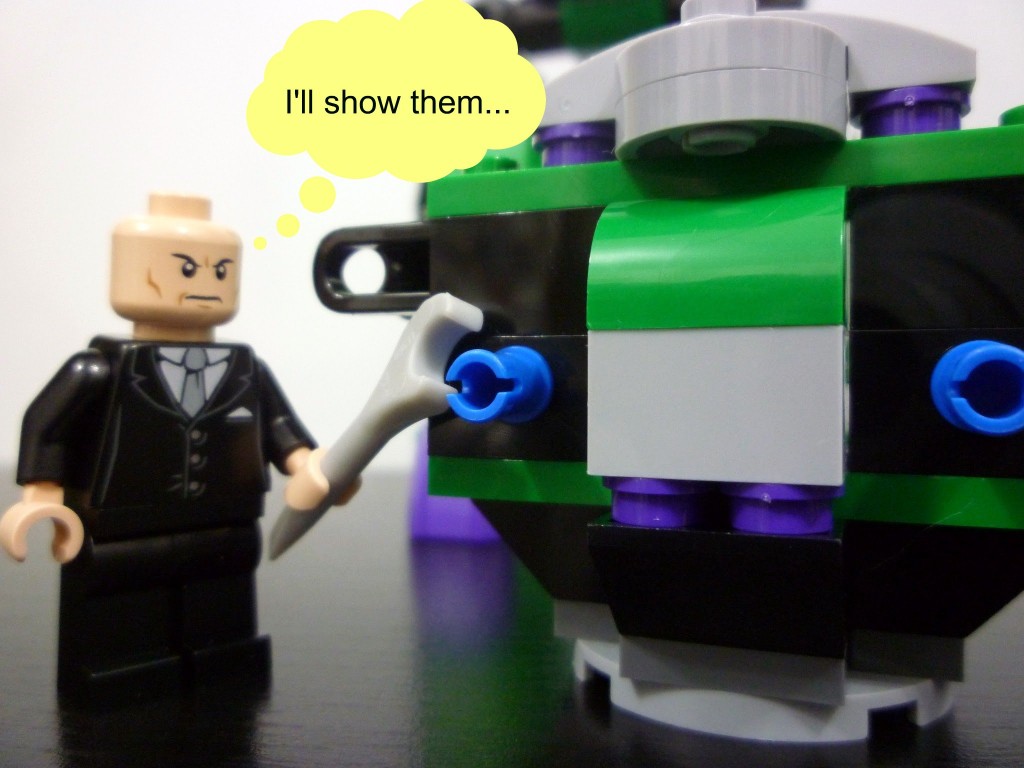 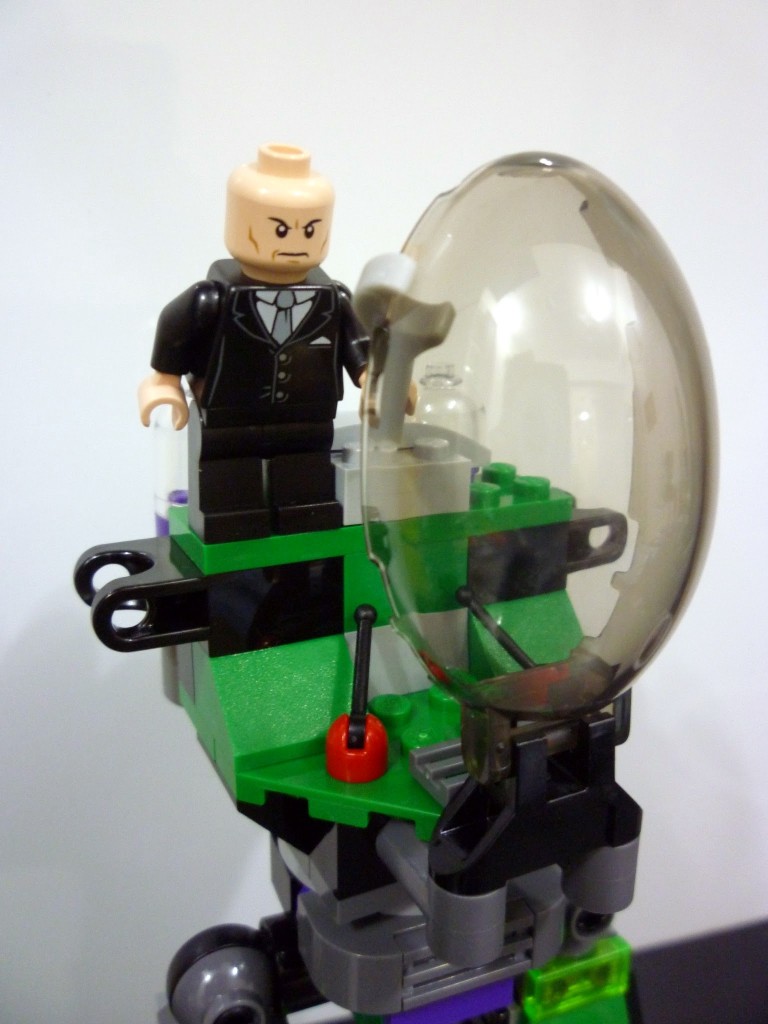 After the torso is done, Lex swiftly moves ahead to the cockpit area. He’s got to have strong hands to climb up there without any ladders. That and his steely look of determination on his face! 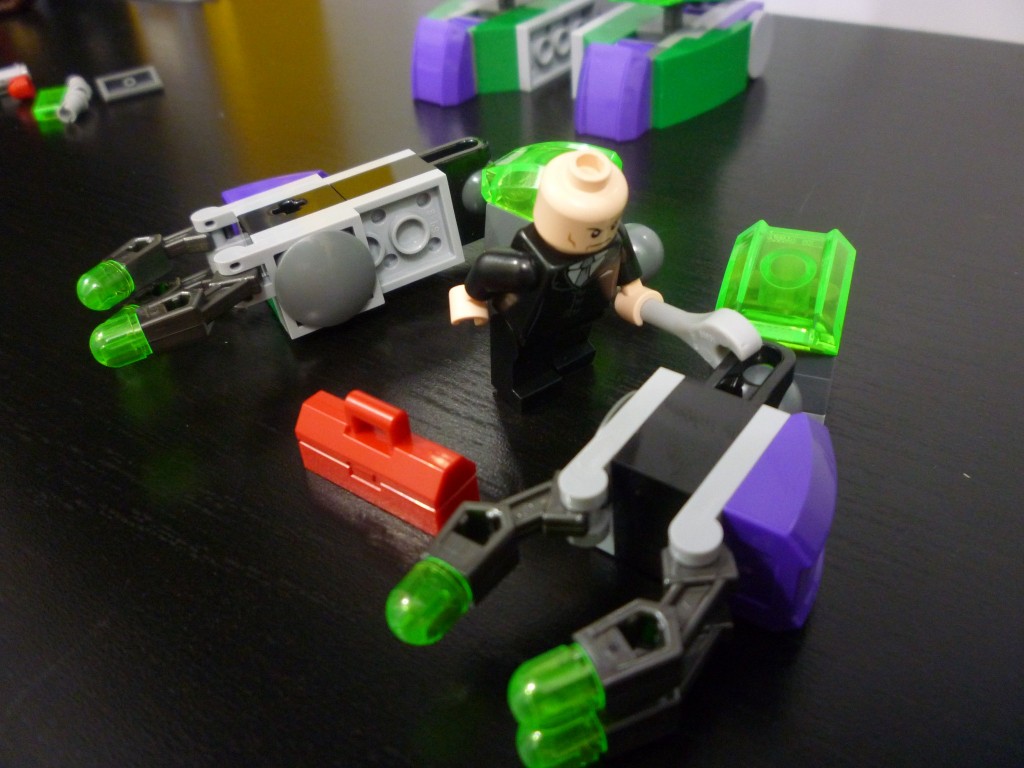 Here’s Lex building the arms. From here on it’s pretty obvious that it’s a very straight forward mech build. If you’ve built any Exo-Force or other mech sets like the brilliant 8080 which I own, you won’t find anything new here except fancy colours. 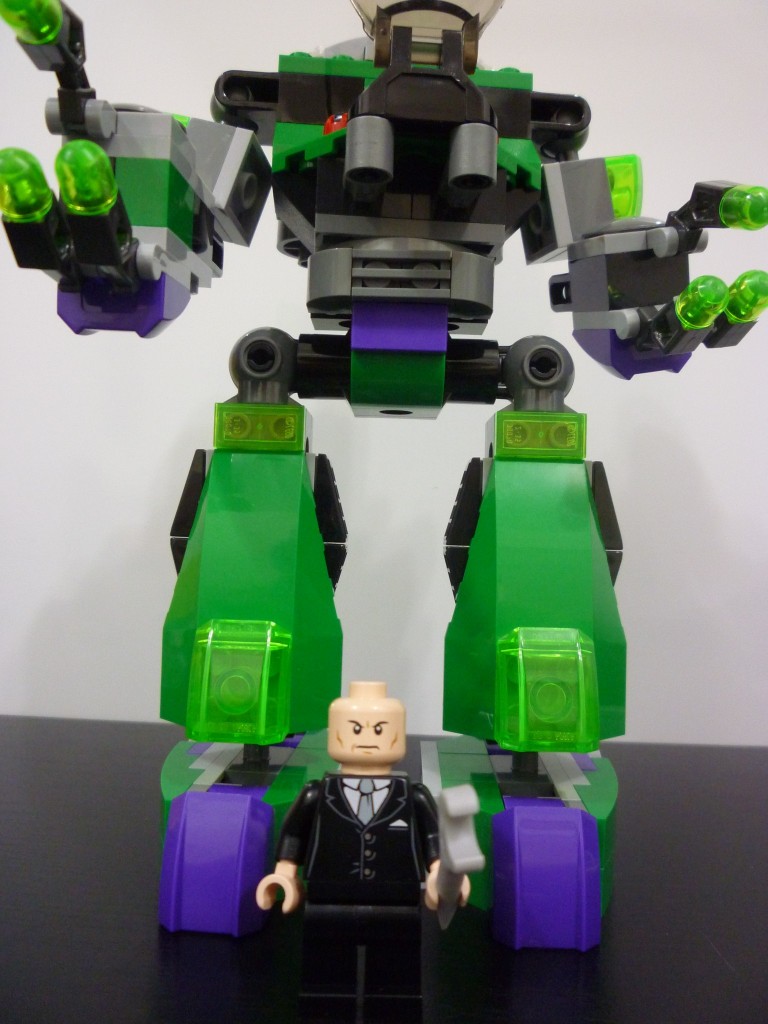 And the main part of the Mech is done! It looks pretty good but seriously Lex, turn that frown upside down! 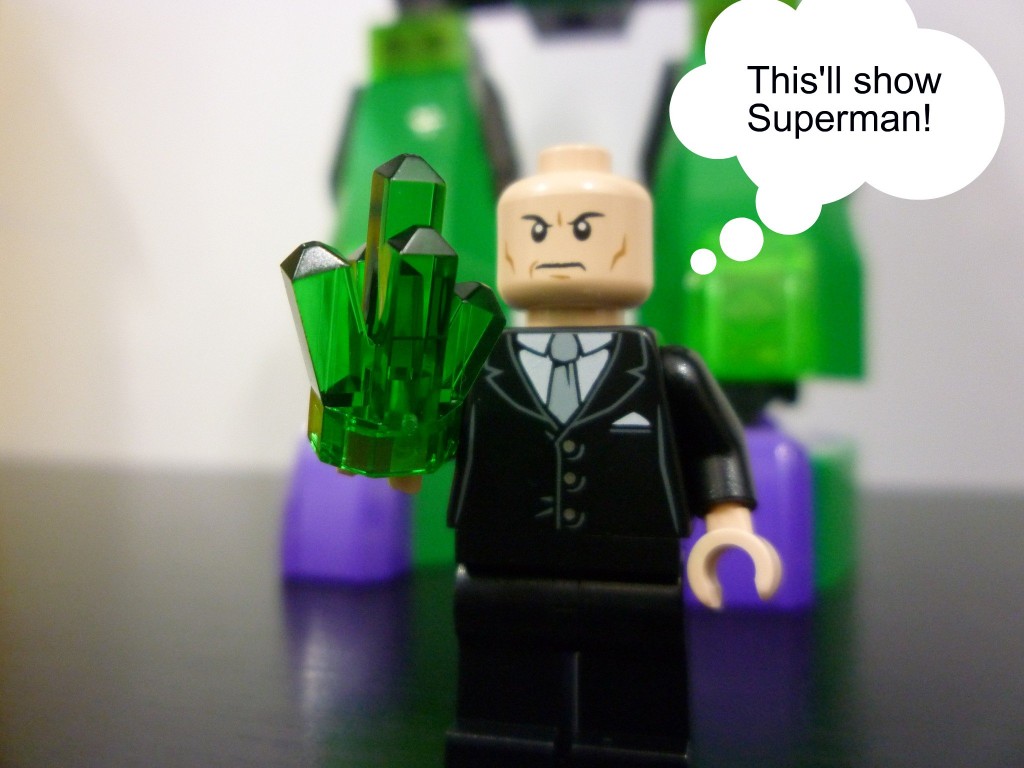 Well, well, well what do we have here? Is that a chunk of kryptonite we see there? Superman’s not going to like that one bit. What are you going to d-… 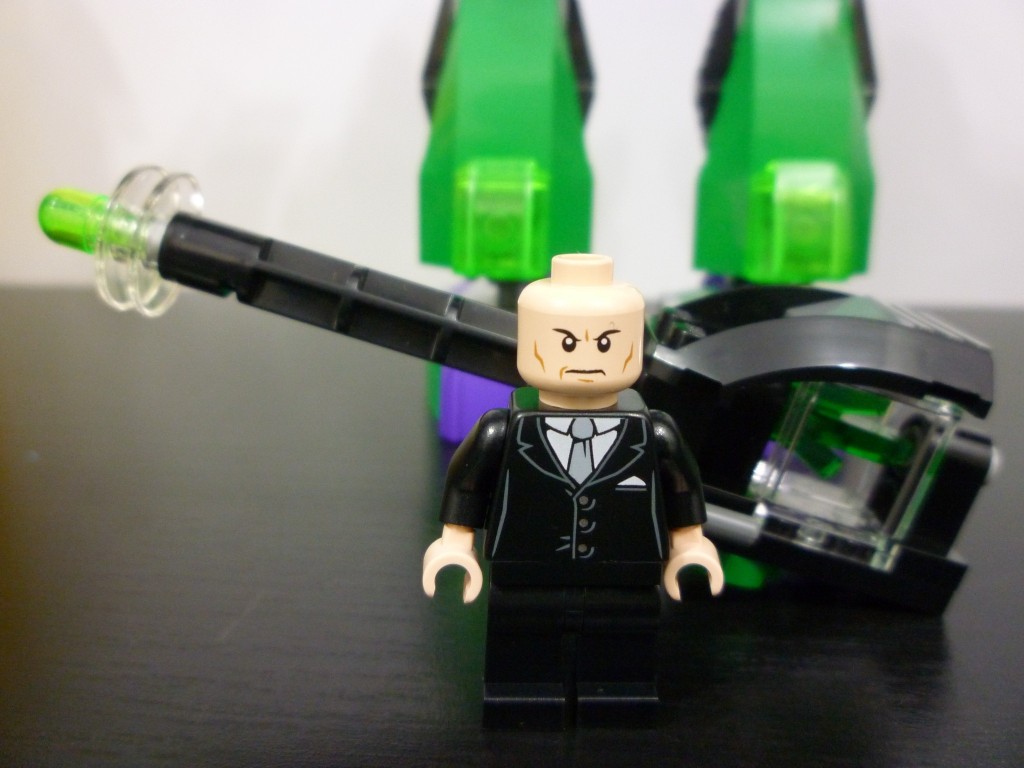 Ah. A giant literal hand cannon fueled by kryptonite. C’mon Lex, fight fair. But then again, Superman has super powers and all… I’ll let it slide for now. 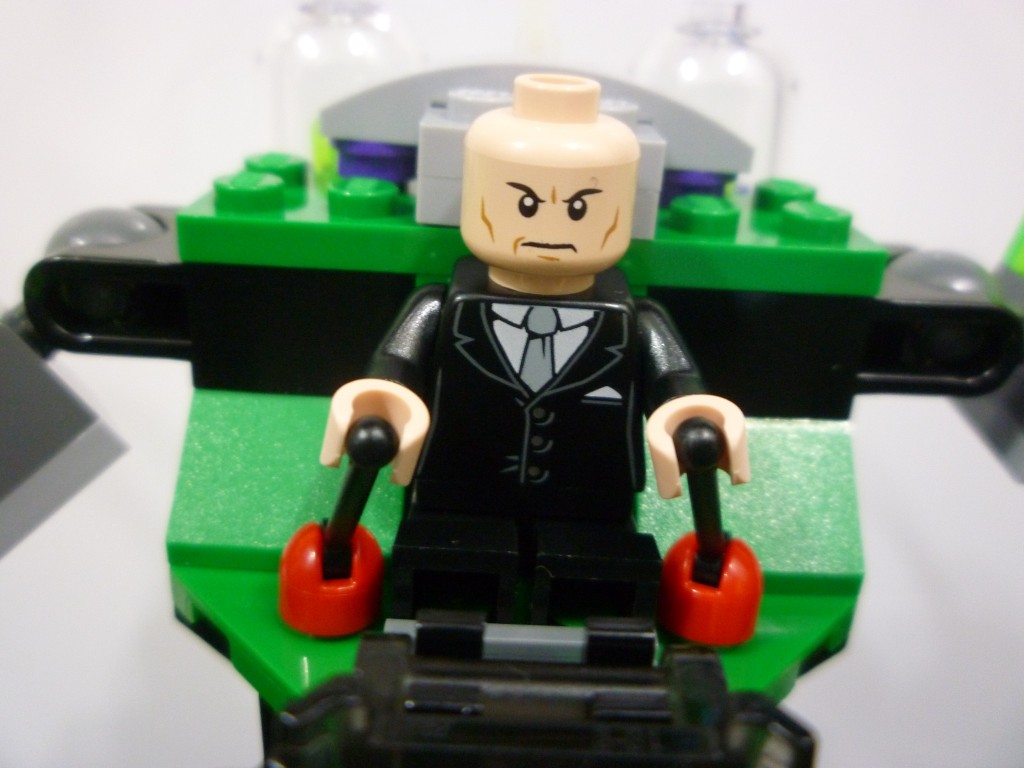 Looks like Lex is all ready to give his new toy a spin! Good luck! 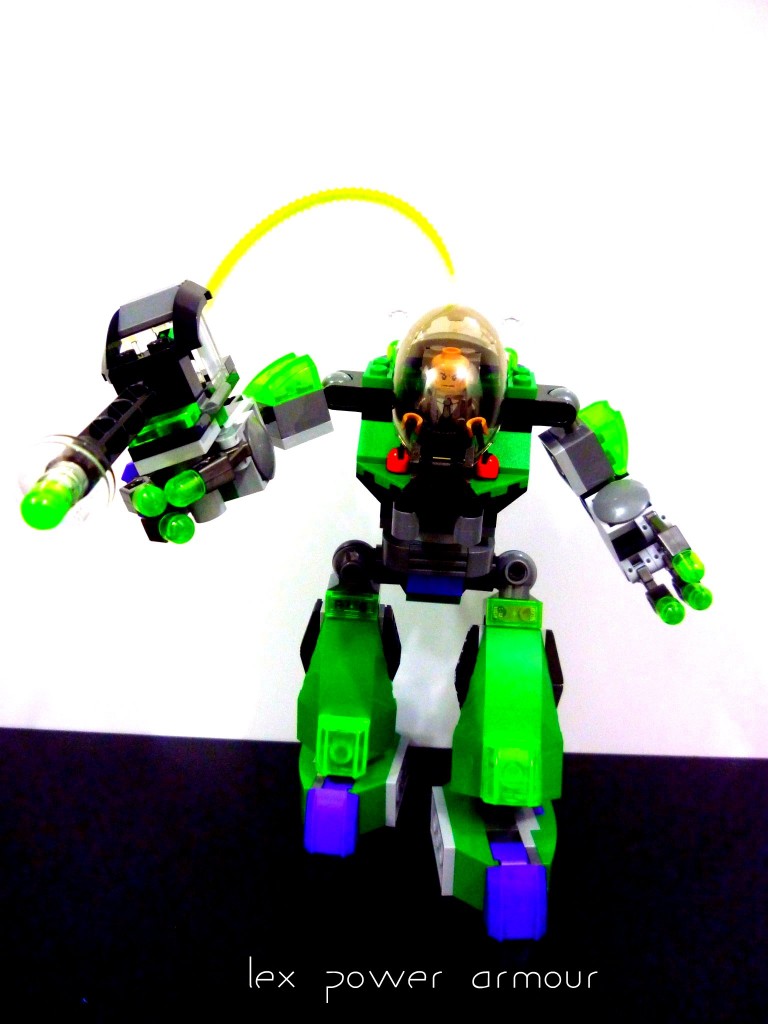 Look at those fancy filters that make Lex’s Power Armour look so much more boss! 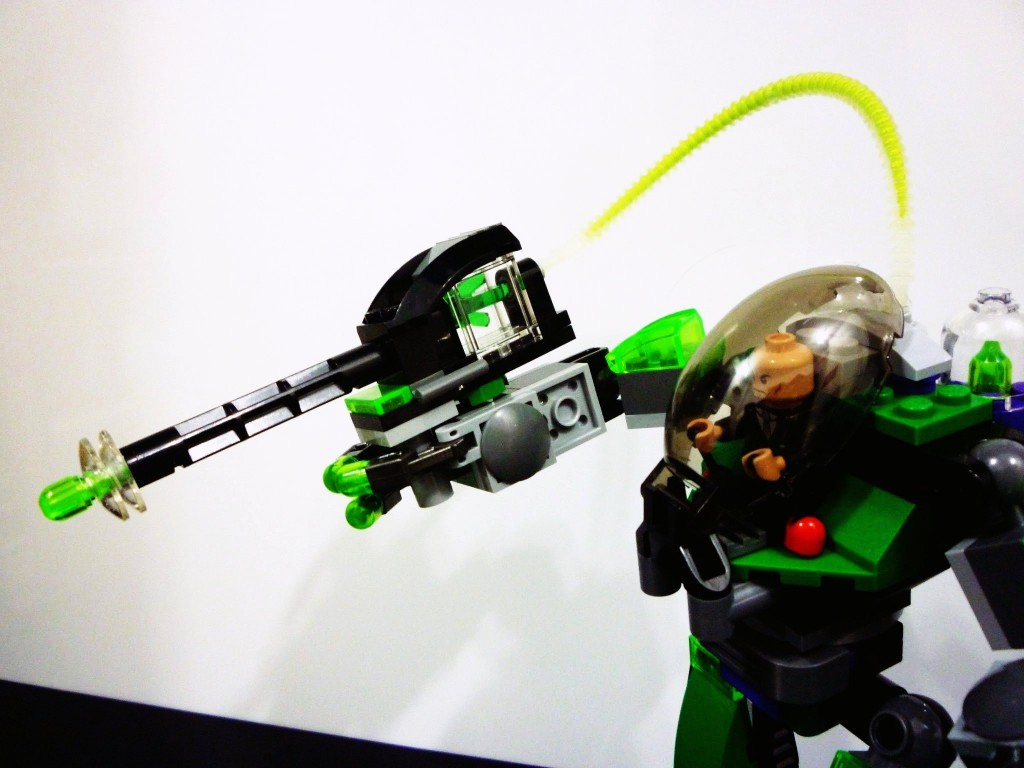 Yes Lex, we’ve seen your giant gun. It’s fancy and it will kill Superman. We get it. 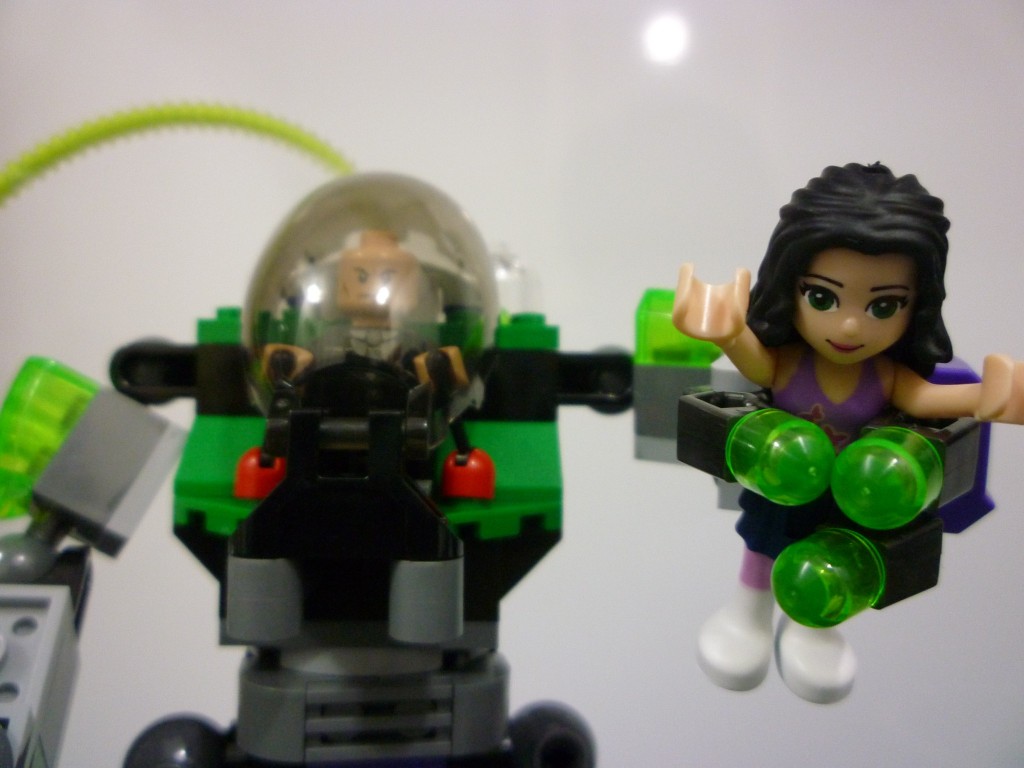 Hey! That’s not nice! Put that poor civilian down! She’s new to this!!! (Olivia minidoll obviously not included in this set) 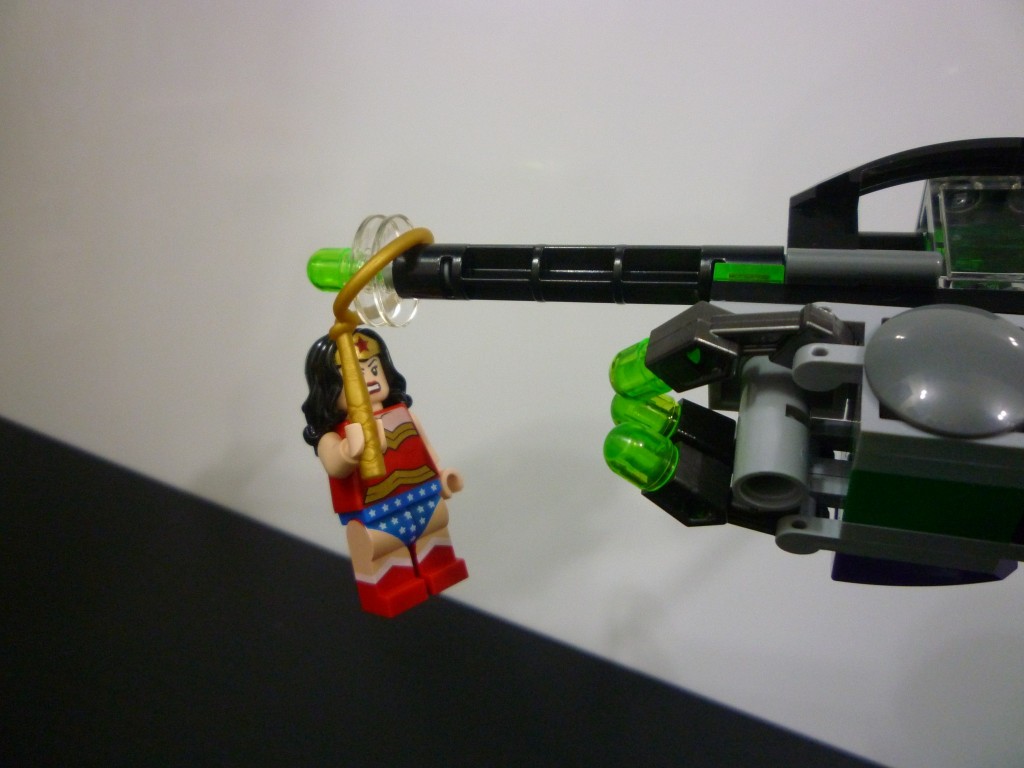 Oh, that was a diversion to lure Wonder Woman? Good thinking, Lex! Look at how silly Diana looks trying to Lasso of Truth your cannon! 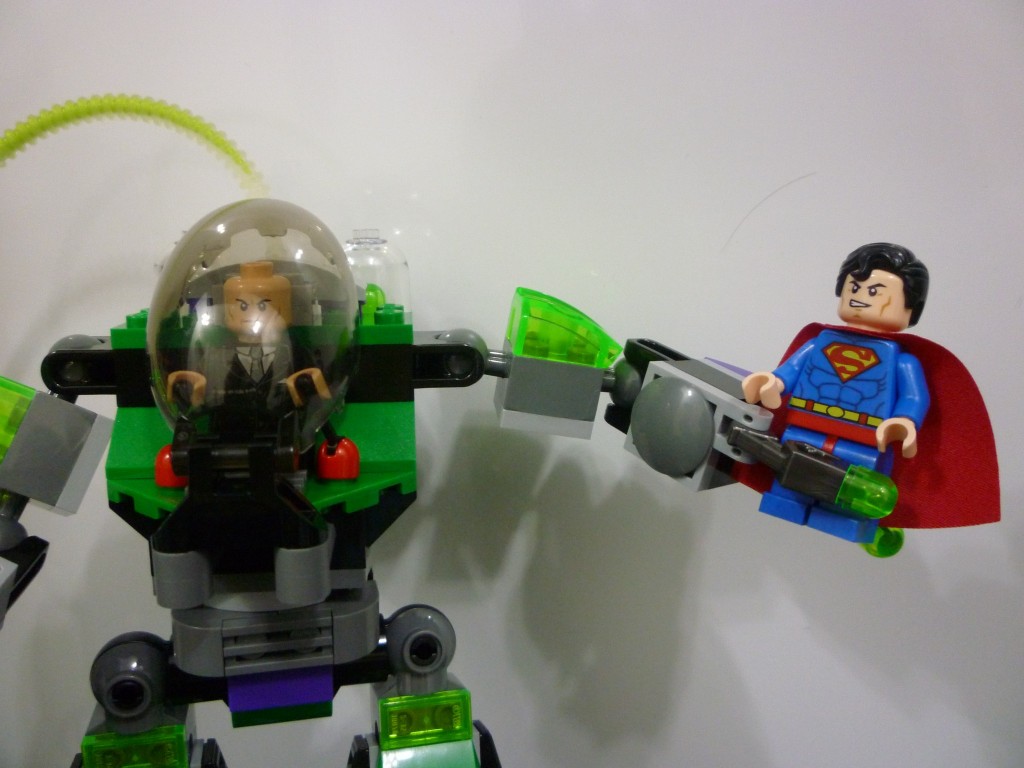 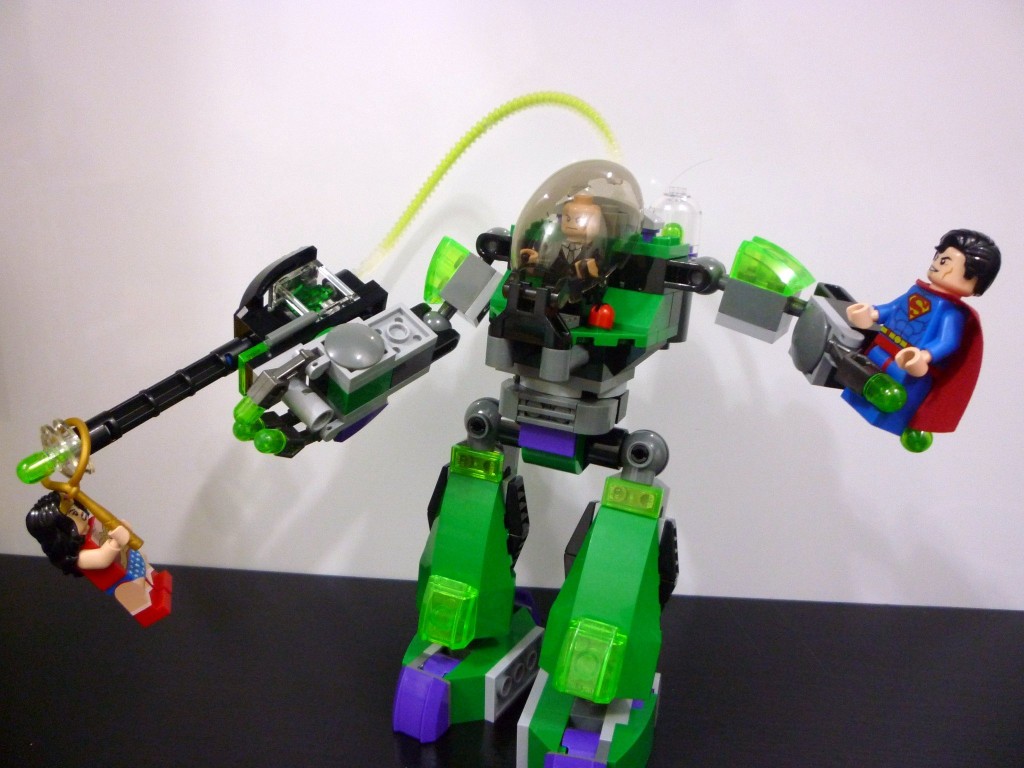 And that’s the set for you! Really fun to play and build!

Final musings: This set is an obvious must-get. Aside from some repetitive steps (legs and arms, I’m looking at you) it’s fun and easy to put together and shouldn’t hurt the wallet TOO hard. Great selection of minifigs plus lots of playability make this set an easy winner. Also has the privilege of being Superman and Wonder Woman’s debut in the world of Lego. Can probably expect this to appreciate in the future. Stock up if you want to hoard!

Playability: 9/10 3 minifigs, a poseable mech with a giant cannon and a million superhero scenarios to act out! Very playable!

Design: 8/10 The design is nothing to shout about since it’s pretty similar to regular mech designs. I like the colours used though. They couldn’t have come up with a better colour scheme. I especially like that greenish tube that feeds into the hand cannon.

Minifigs: 9/10 So close at a perfect score! Loses points because of Wonder Woman’s suspicious Chinese origins. Superman is done perfectly.

Total: 44/50 A great must-have set if you’re a fan of pop culture/comics/iconic Lego licensed themed sets. It’s Superman! Great use of colors and everyone loves mechs so this is an easy recommendation to make. Not happy about the China parts since this is a licensed set, but oh well. BUY THIS ASAP.

Coming up next! A little teaser! 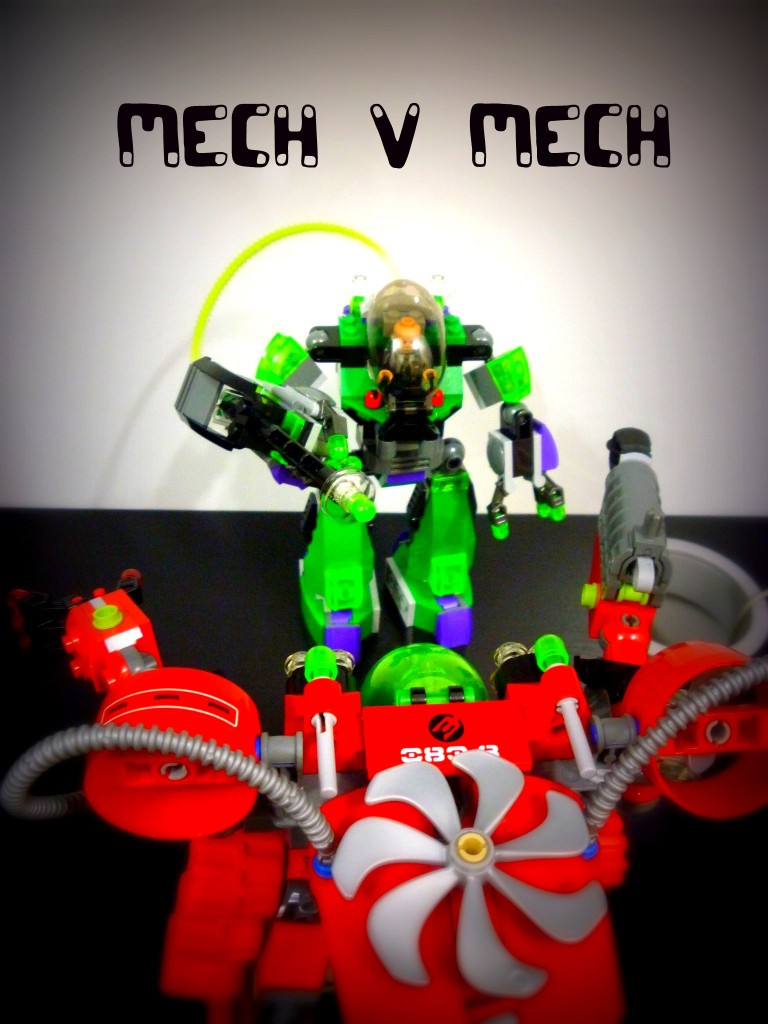