And yes, if you were wondering – the Unikitty is a brand new variant and is exclusive to this set. Unikitty is one of my favourite characters from The LEGO Movie and I’m a keen collector, so it was a no-brainer picking this one up to add to my collection! 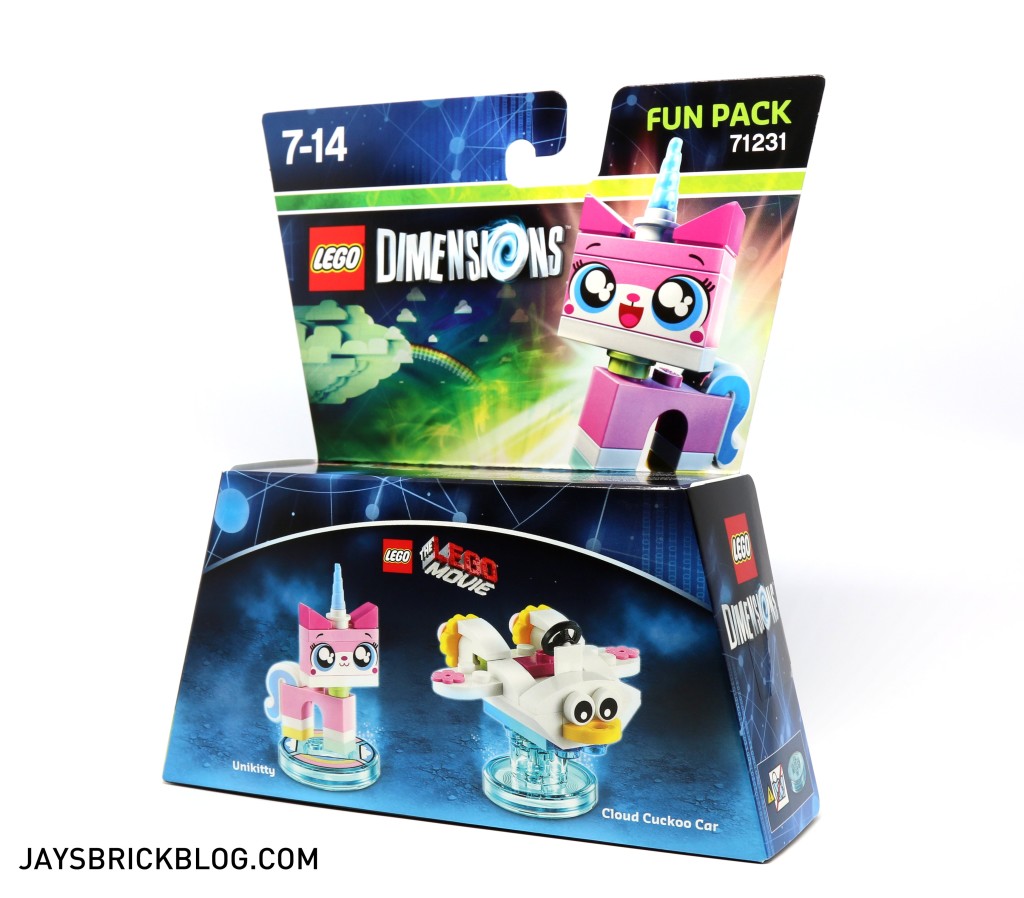 In my previous LEGO Dimensions review, I checked out the Portal Level Pack – Level Packs are the largest type of LEGO Dimensions add-on packs, which I believe unlock new levels whereas Fun Packs just allow you to unlock Playable Characters in-game.

Don’t quote me on this, I don’t own the video game so I really have no idea what I’m talking about here! I’m just buying these packs for the LEGO and will be reviewing it from that perspective. 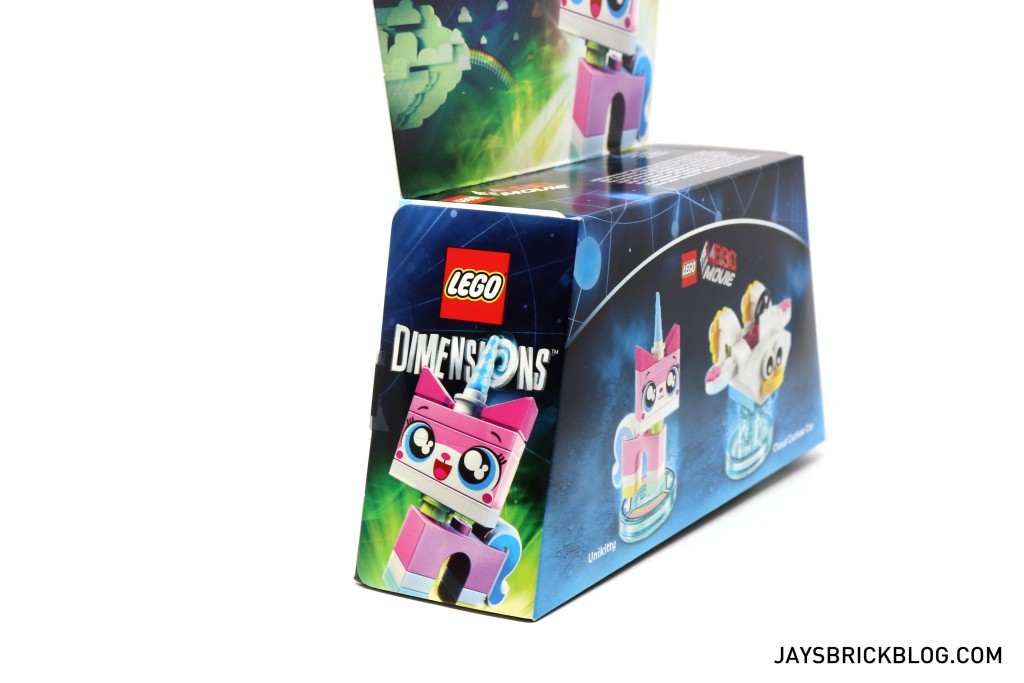 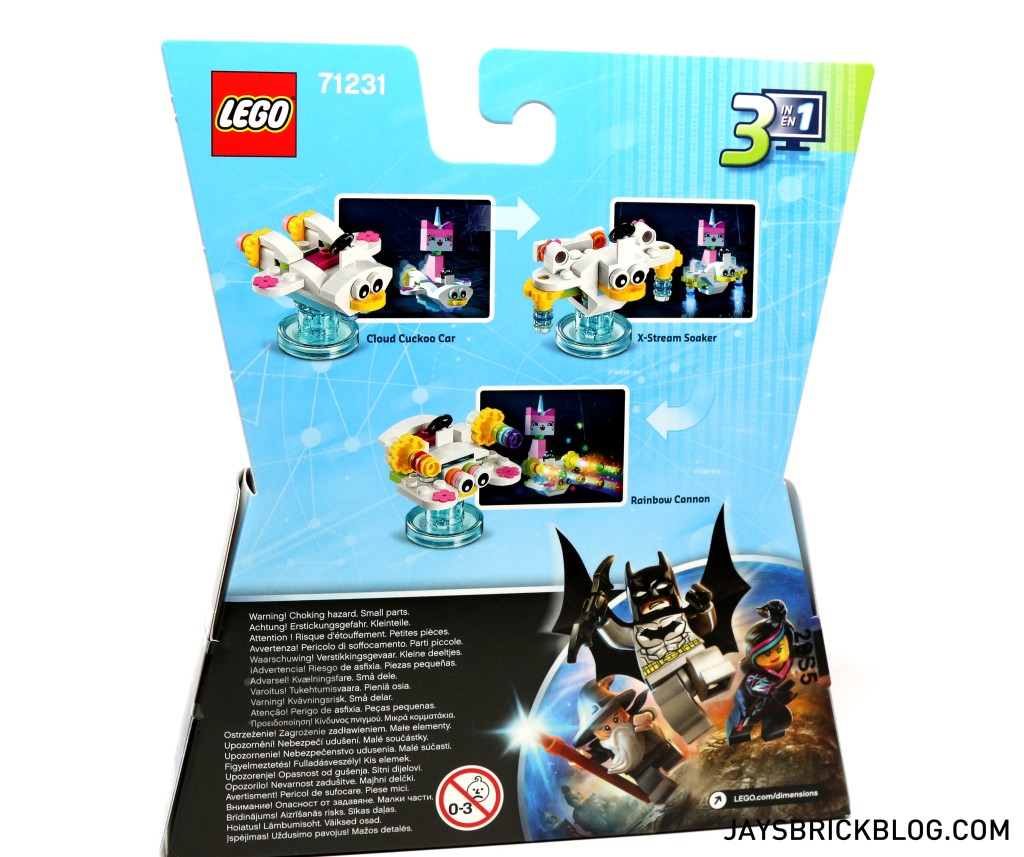 Like the other LEGO Dimensions sets, the Unikitty fun pack comes in a new trapezoid shaped box and will be found in the video games section instead of the usual toy aisle. The packaging is decked out in Unikitty’s trademark cheery colours and visuals and behind, you get a preview at the 3 mini-builds that you can assemble. 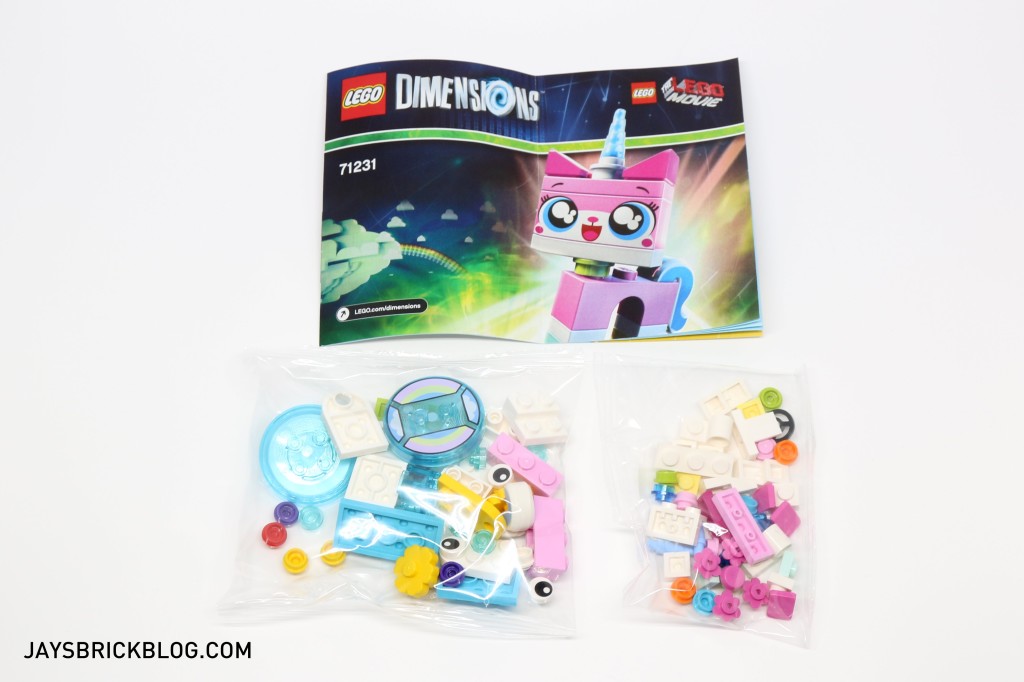 As it’s a Fun Pack, the contents are rather light since you typically only get 1 character or minifigure as well as an accompanying build – at its core, Fun Packs are essentially glorified polybags. 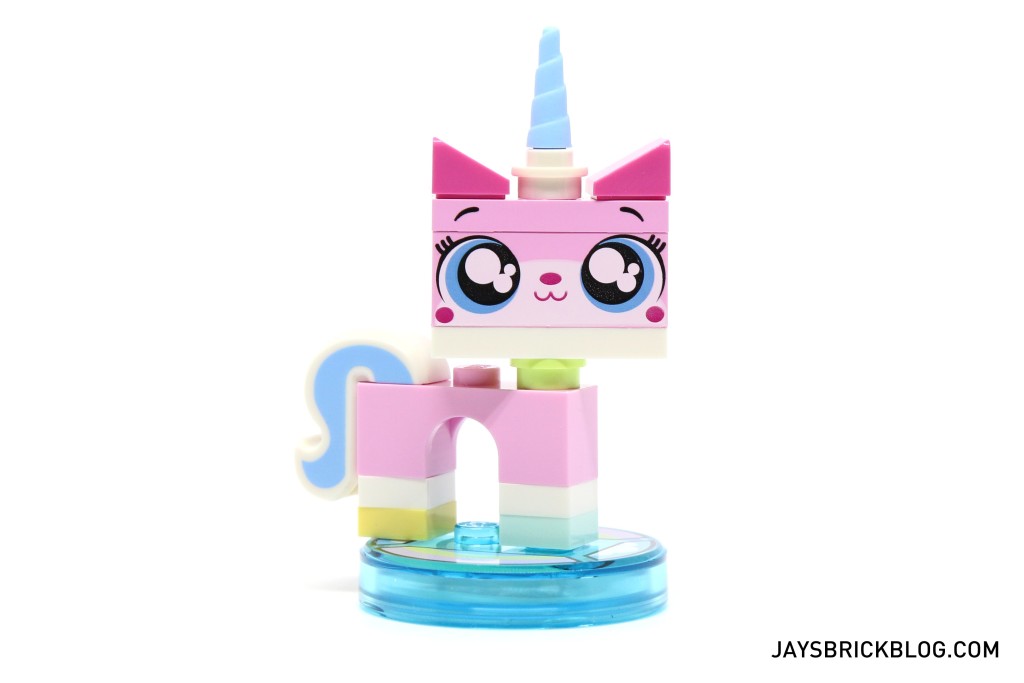 Here’s a look at the exclusive Unikitty included in this set. For Unikitty and LEGO Movie collectors, it should be a no-brainer picking this set up purely to complete your collection. The LEGO Dimensions Unikitty comes with an adorable and cutesy expression. Her eyes twinkle and are very Anime/Kawaii-inspired and is all around a great Unikitty variant to have. 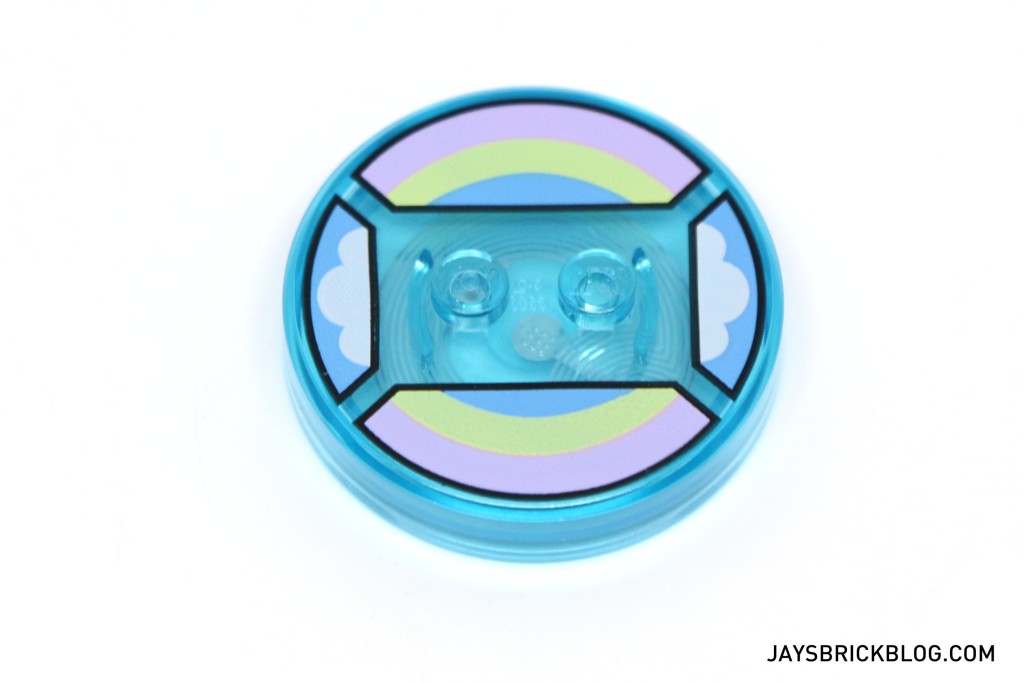 Like all Dimensions characters, Unikitty comes with her own special NFC-base which has her usual cloud and rainbow motifs printed on it. It makes a really nice base for Unikitty, especially if you’re like me and mostly display your LEGO sets/characters.

There was a bit of confusion on forums about whether this was an exclusive Unikitty as she bears a lot of similarities to the ultra-exclusive Unikitty that was given out at the San Diego Comic Con 2014.  I’m quite fortunate to own the SDCC Unikitty, so here’s a look at how they both slightly differ. 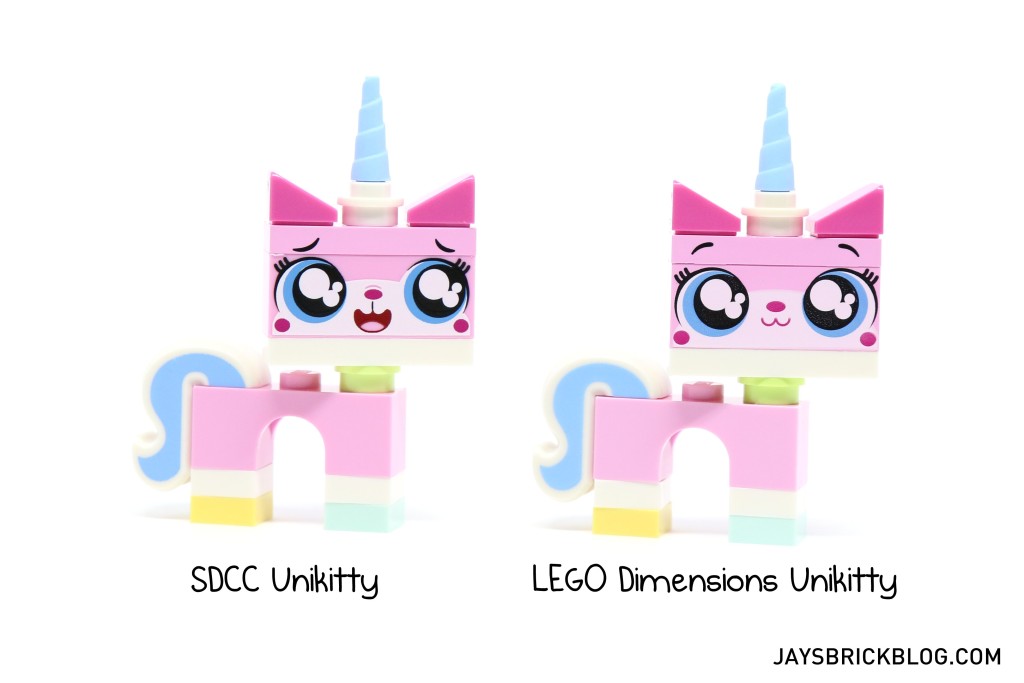 Their eyes are identical, but the LEGO Dimensions Unikitty has a closed mouth and her eyebrows are slightly different as well. The SDCC Unikitty costs a pretty penny on eBay, so if you’re unwilling to pony up a couple of hundred to get her, the LEGO Dimensions version makes a very convincing substitute. 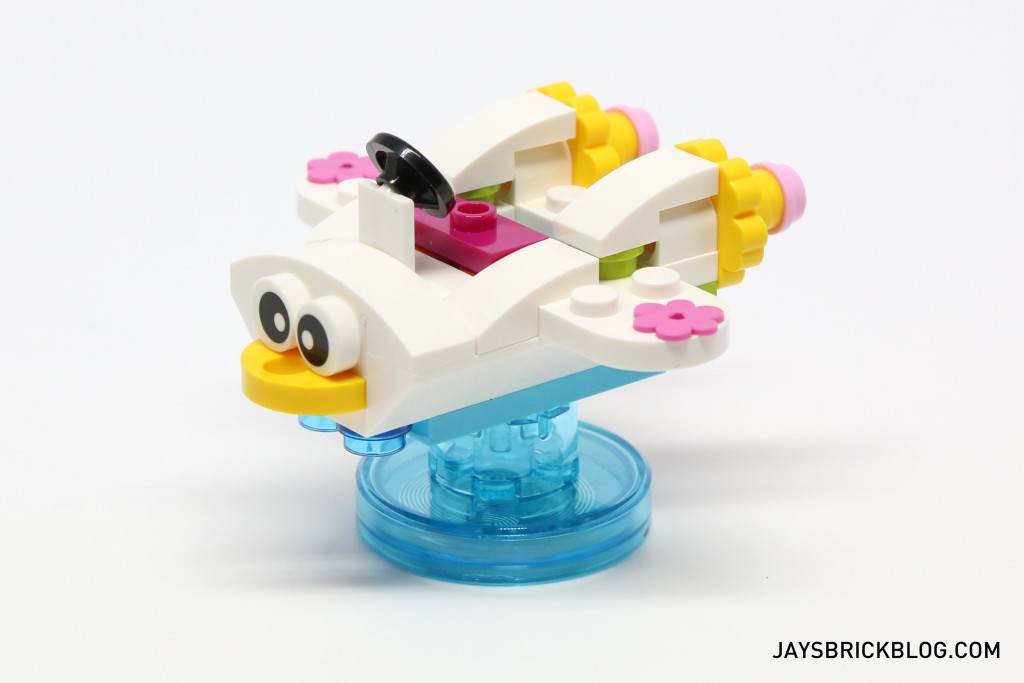 This is the first variation – the Cloud Cuckoo Car, which kinda just looks like a white duck with a steering wheel attached and flowers erupting at all sides. It’s whimsical, nonsensical and cute – all the hallmarks of Unikitty’s personality. 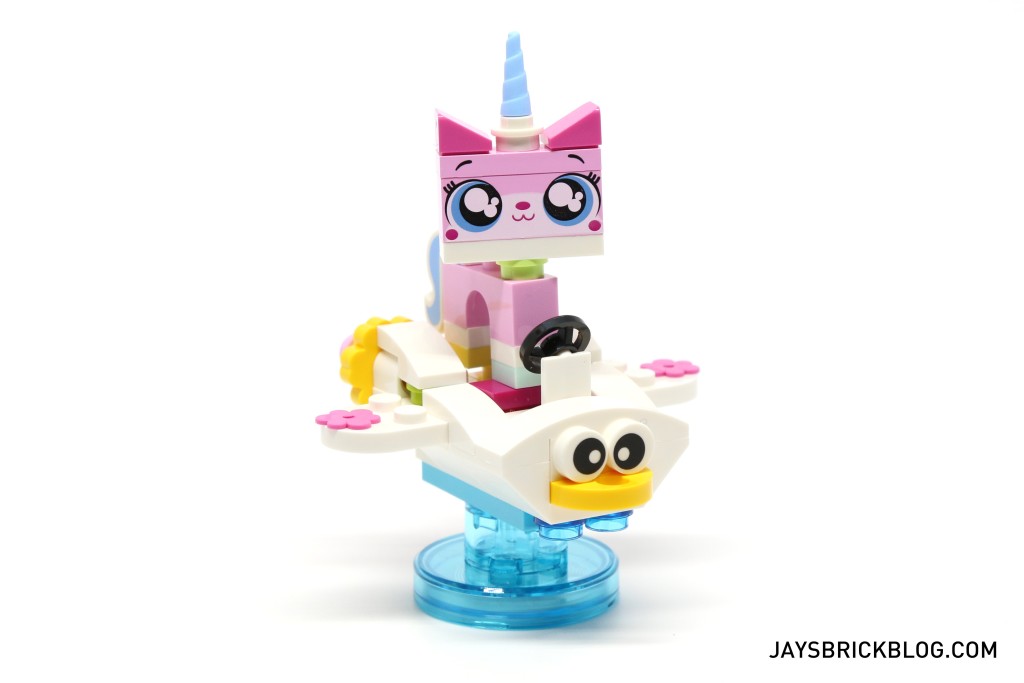 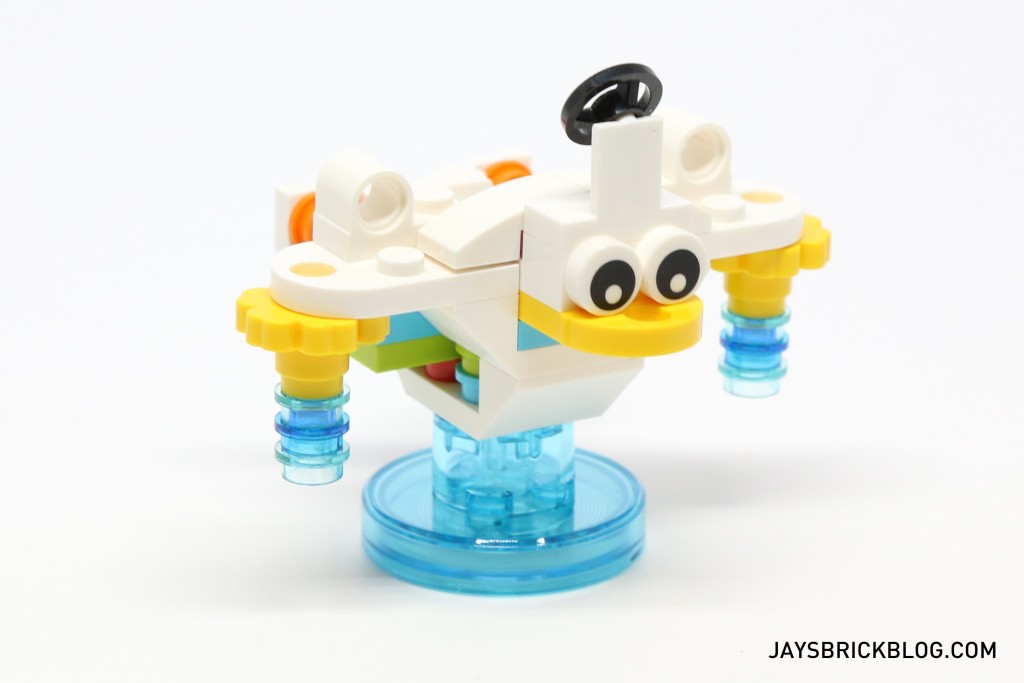 The second model you can assemble is the X-Stream Soaker, another silly-looking flying contraption that relies on jets of water to keep it in the air. Like the Cloud Cuckoo Car, it comes with googly eyes and a bill. 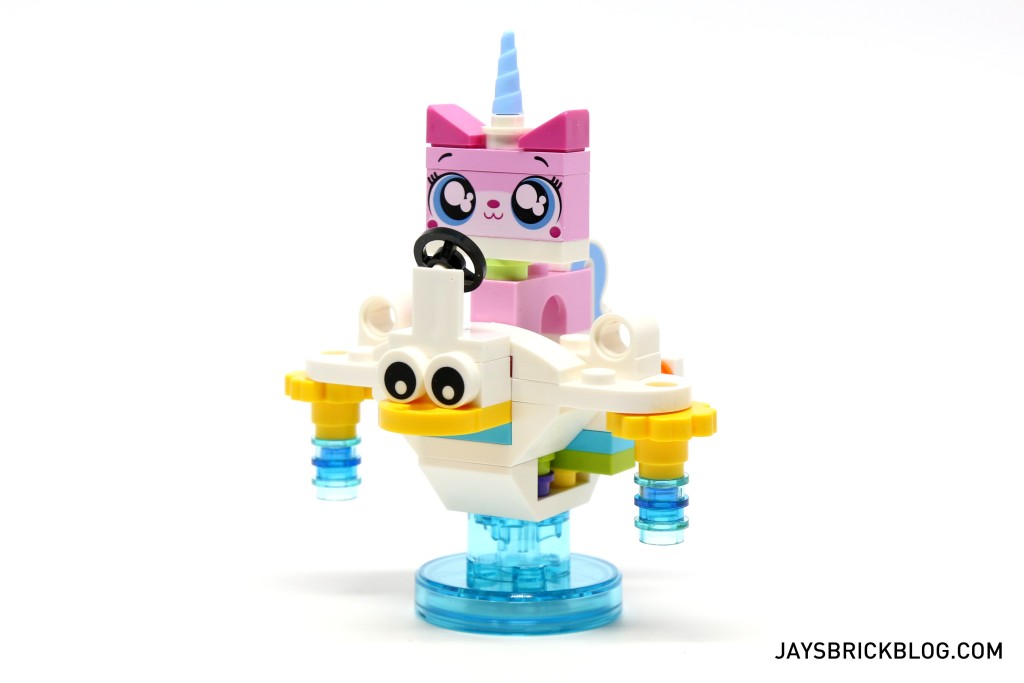 Yup, Unikitty can ride it too. 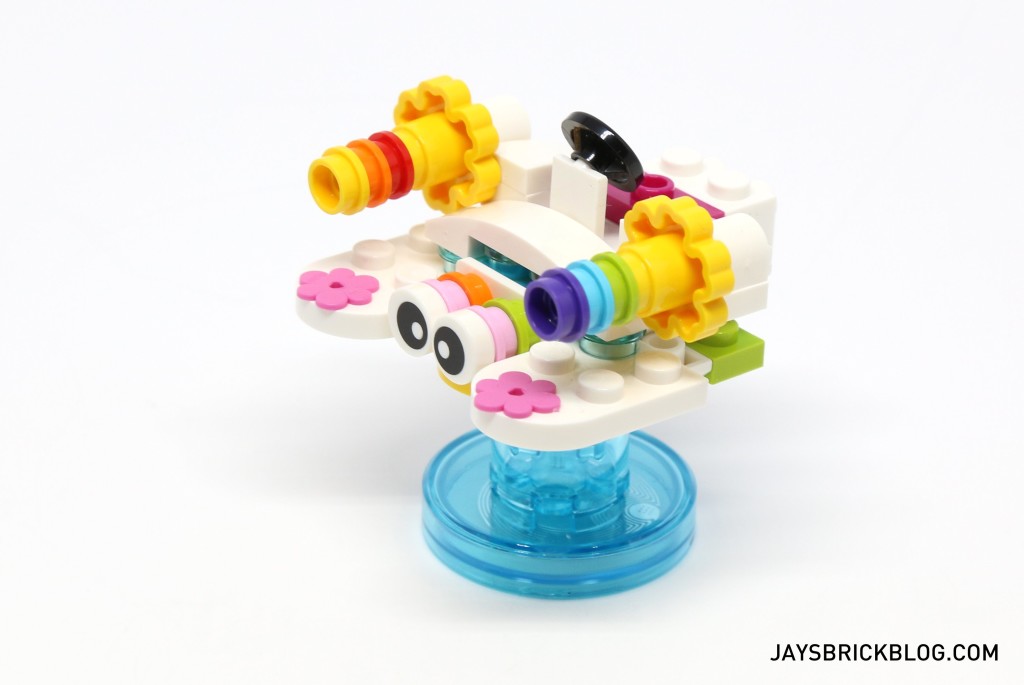 Last but not least is the Rainbow Cannon – yet another flying machine but this time packing a bit more firepower thanks to the twin multi-coloured cannons on each side. 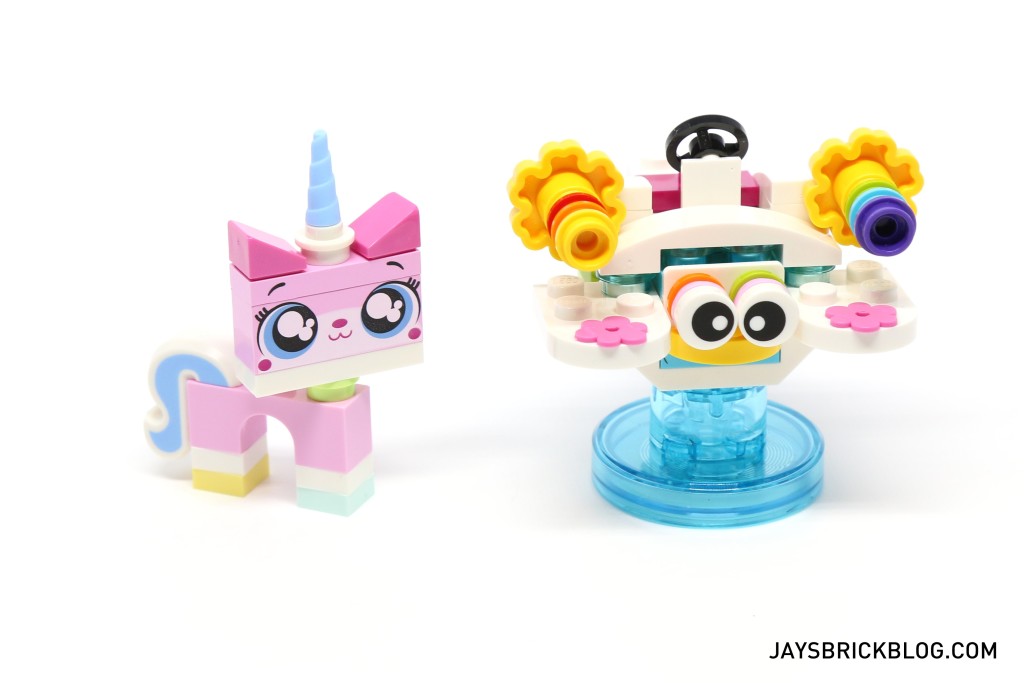 I’m sure Unikitty can ride this one, but I didn’t quite like her hind legs dangling out the back of the Rainbow Cannon, unsupported by anything.

Final thoughts: I’m beginning to spot a pattern here. I’m willingly overpaying for these LEGO Dimensions sets purely to get my hands on rare or exclusive minifigures without even a second thought – something that I’m sure comes to no surprise to LEGO’s marketing and product team. That said, I did splurge $200 on an exclusive SDCC Unikitty, so the LEGO Dimensions version doesn’t even come close to the lengths I will go for a Unikitty.

The exclusive Unikitty is great, the expression is brilliantly Unikitty and for fans who refuse to pay obscene amounts for the SDCC-version, this will be an easy way to add this particular starry-eyed variant to your collection.

At $20, it’s certainly in impulse purchase category but unless you play or enjoy the video game, there’s not much value contained in this set. The model is kinda boring and other than a familiar colour scheme and googly eyes serves no real purpose to the grand scheme of things. I will most definitely harvest it for parts as soon as I conclude this review.

Would I recommend it? Only if you’re a die-hard LEGO Movie or Unikitty fan who MUST have as complete of a collection as possible. If you’re in no hurry, I’d recommend just waiting it out till the LEGO Dimensions sets inevitably go on clearance or get deeply discounted by retailers. Unikitty isn’t as popular as Portal, Back to the Future or Doctor Who so I wouldn’t worry too much about it being too hard to get ahold of.

Thanks for reading my review! Are you planning on getting any other LEGO Dimensions Wave 2 sets? I’m not a Doctor Who fan at all, so I’ll be skipping what is most likely the most anticipated set this wave.