Earlier this week, the 4th wave of LEGO Dimensions sets were released and I wasted no time picking up the Ghostbusters-flavoured 71233 Stay Puft Marshmallow Man to review. The Stay Puft Fun Pack is undoubtedly one of the most eagerly anticipated sets in the Fourth Wave of LEGO Dimensions which also includes the Midway Arcade Level Pack, Superman Fun Pack and Aquaman Fun Pack.

As I’ve mentioned in my previous LEGO Dimensions reviews, I do not own the game and I doubt I’ll ever plan to since console games aren’t really my thing – this review will focus purely on the Stay Puft Marshmallow Man minifigure and the accompanying Terror Dog model. 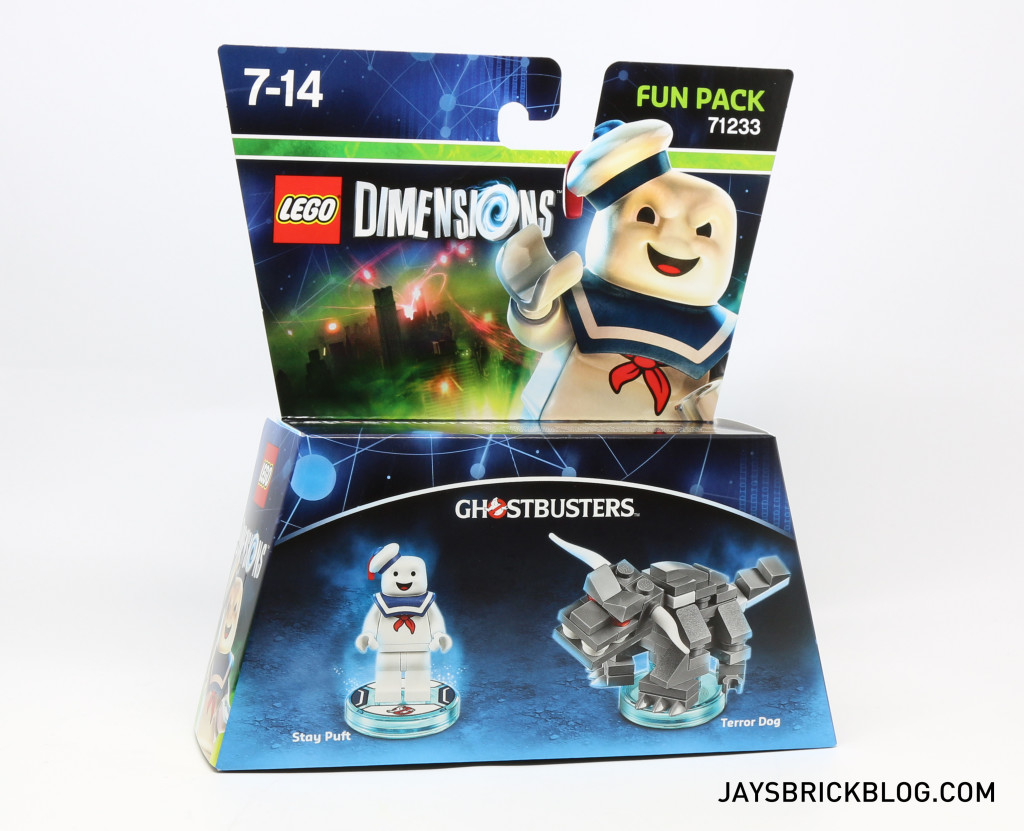 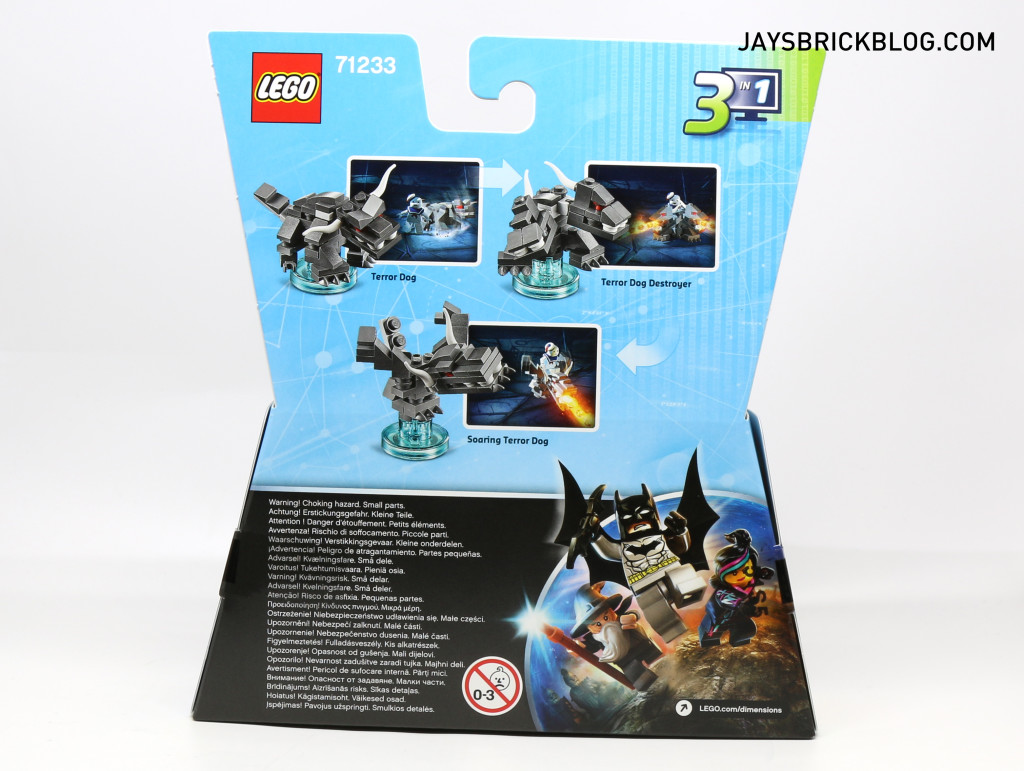 The box for the Stay Puft Fun Pack retains the same look and trapezoid shape as all the other LEGO Dimensions Fun Packs. It features the lovable Stay Puft Marshmallow Man who is totally not a possessed Pillsbury Doughboy intimidatingly leering at the viewer, and also photos of the minifigure and Terror Dog build.

The back showcases the other 2 alternate Terror Dog build variations and their respective in-game models. 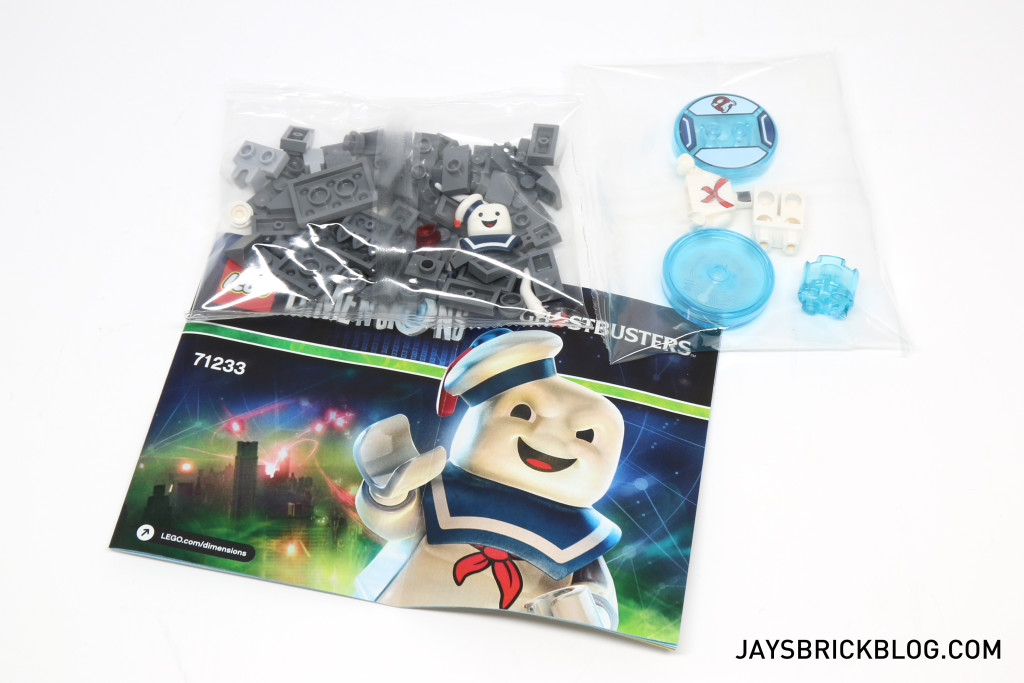 The contents are standard for a LEGO Dimensions Fun Pack – two bags of LEGO parts and an instruction booklet which still does not have building instructions for the Terror Dog. Yup, that’s right – if you’re like me and don’t have the game, you’ll have to download the instructions for all 3 Terror Dog builds online. It’s quite a pain and I don’t like having to constantly refer to my phone or tablet for build instructions. 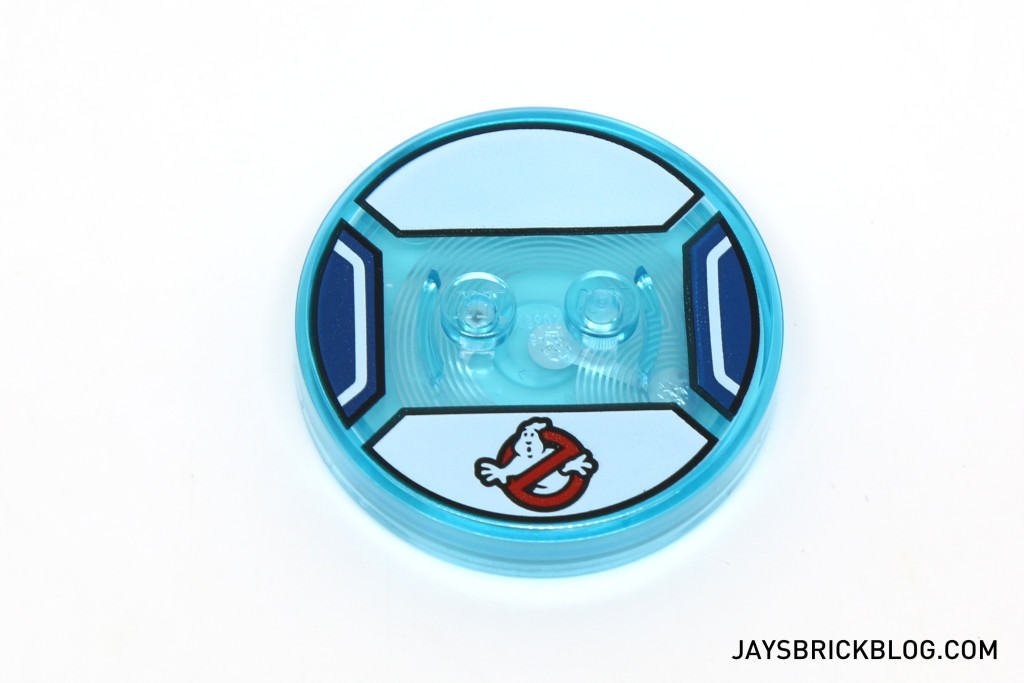 Here’s a look at the NFC LEGO Dimensions base which unlocks the Stay Puft character in game when you place it on the Toy Pad. For non-gamers like me, I use it as a glorified (and fancy) minifigure stand since it looks really cool thanks to the Ghostbusters logo printed on the base. 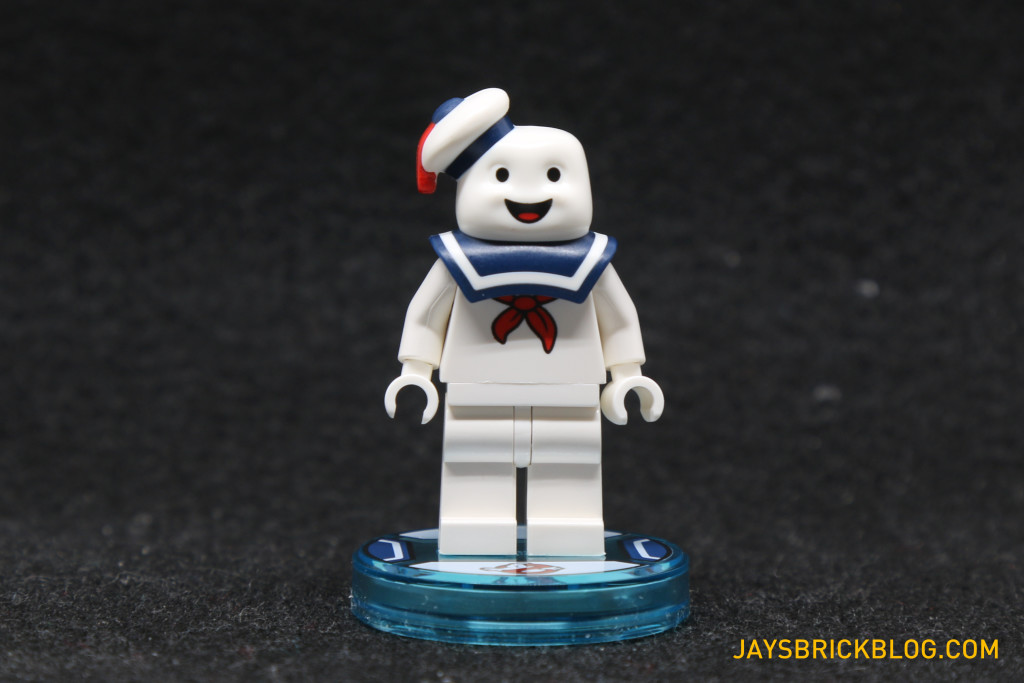 If you’re a fan of LEGO Ghostbusters like I am, the Stay Puft Marshmallow Man minifigure is nothing short of brilliant. He’s one of the most defining and iconic parts of the original Ghostbusters movie and fans are absolutely going to love the cute minifigure-version of everyone’s favourite lovechild of the Pillsbury Doughboy and the Michelin Man.

The minifigure is wonderfully designed, complete with Stay Puft’s sailor hat, collar and the most delightful expression that you’ve ever seen on a minifigure. 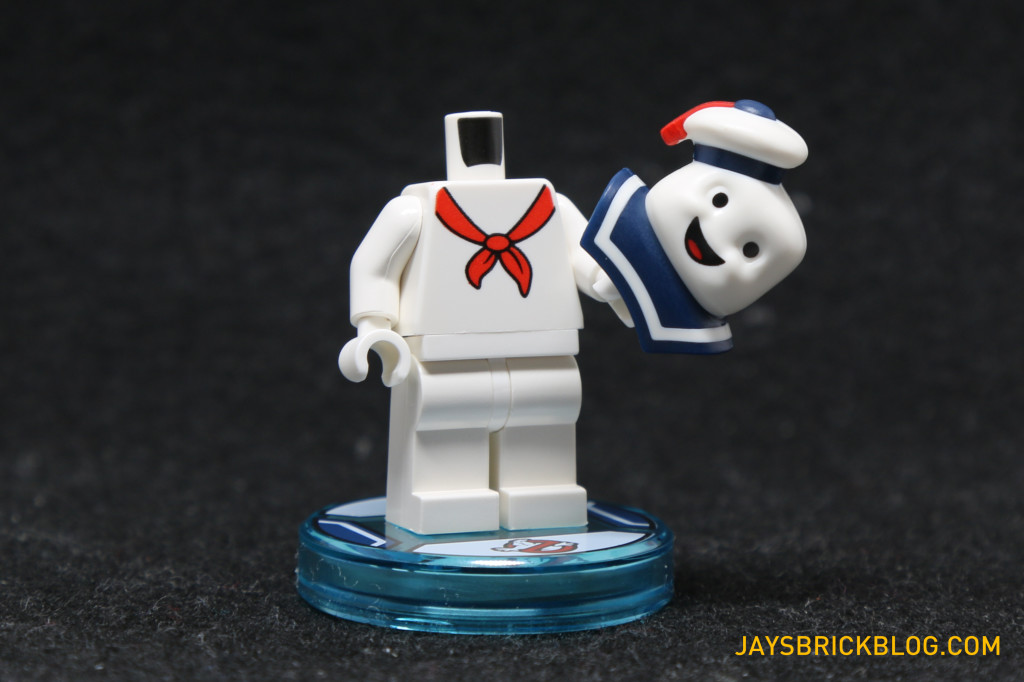 The Stay Puft minifigure feature a custom moulded head which is fused to the sailor’s collar that fits on perfectly onto a regular minifigure body. Torso printing is fairly minimal, with just a red ribbon but it does the job well. 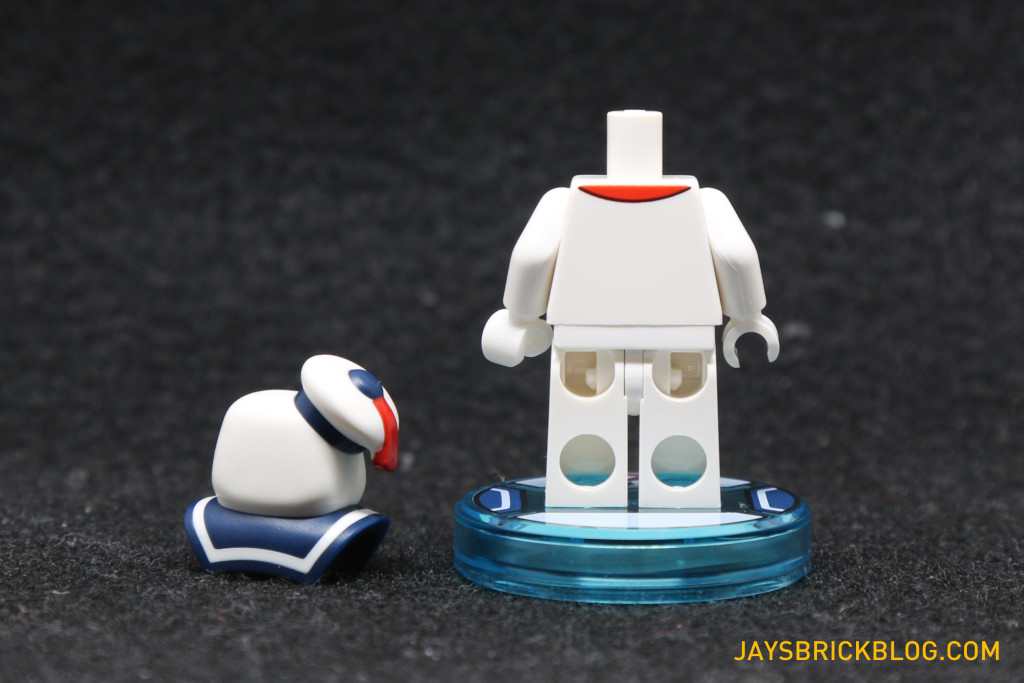 The Stay Puft minifig has back printing as well, but it’s fully concealed by the collar once it’s affixed, so I don’t really know why the designers bothered. It just seems like a waste of paint. 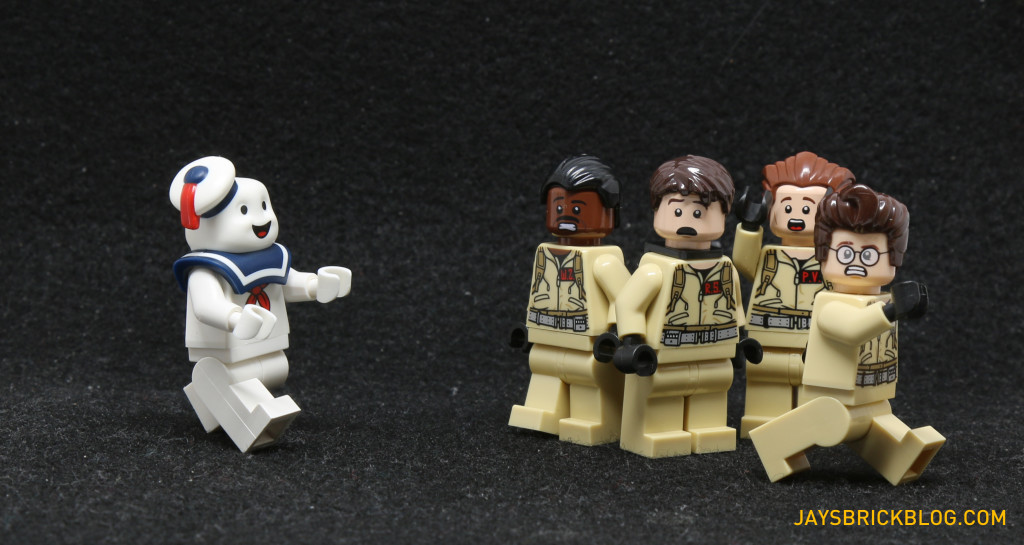 Just like the Portal Level Pack, LEGO Ghostbusters fans are going to pick this set up purely for the excellent Stay Puft Marshmallow Man minifigure. He’s an essential addition to your Ghostbusters Ecto-1 or Ghostbusters Firehouse Headquarters and just looks perfect when displayed with the original Ghostbusters crew. 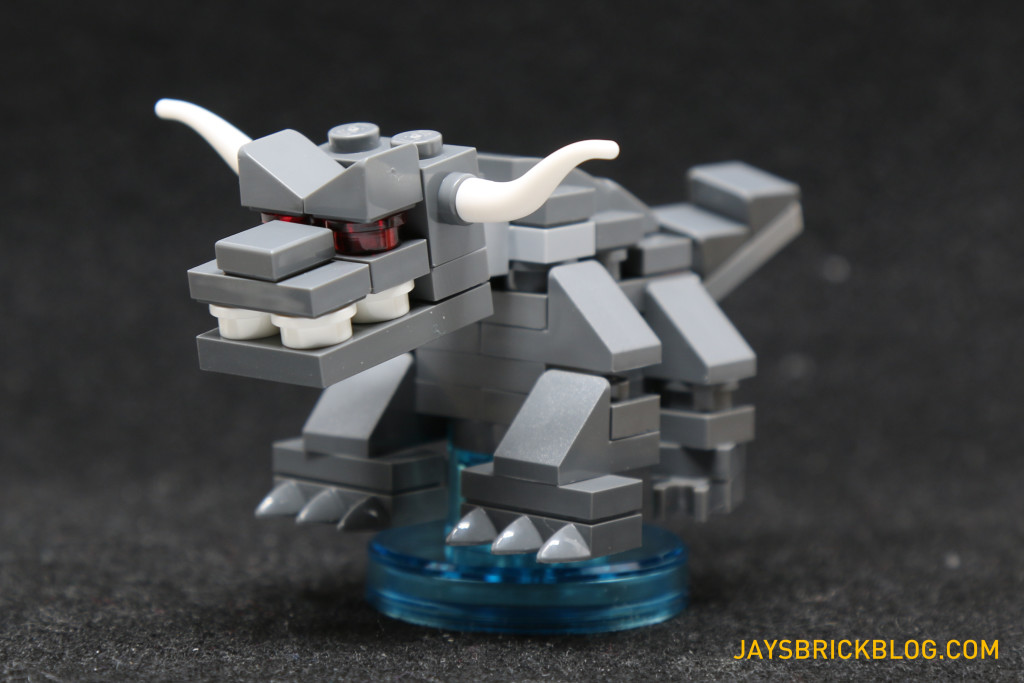 The accompanying Terror Dog LEGO model on the other hand, is pretty bland. He’s mostly made out of grey bricks, which to be honest, isn’t the most eye-catching colour in LEGO’s spectrum.

This is the first and primary build – aptly named the Terror Dog. The model is mostly made out of grep slopes, cheese slopes and plates, giving it a very sharp angular appearance. Overall, the design does its job well as you’re immediately able to recognise the Terror Dog and the designers have nailed the menacing red eyes, teeth and white horns. 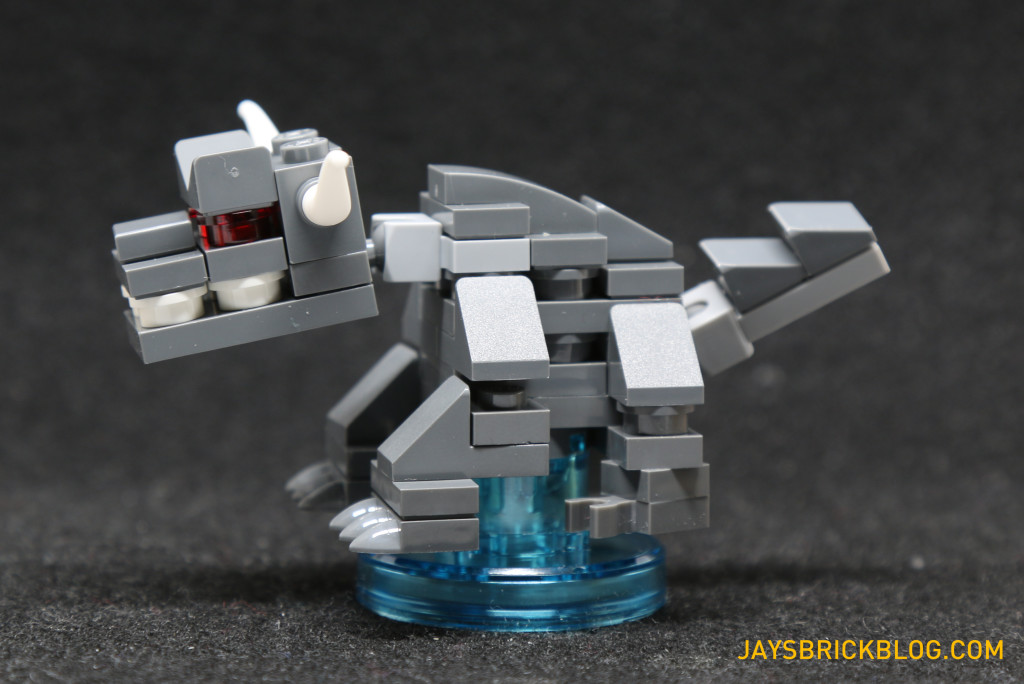 This is the Terror Dog from the side. 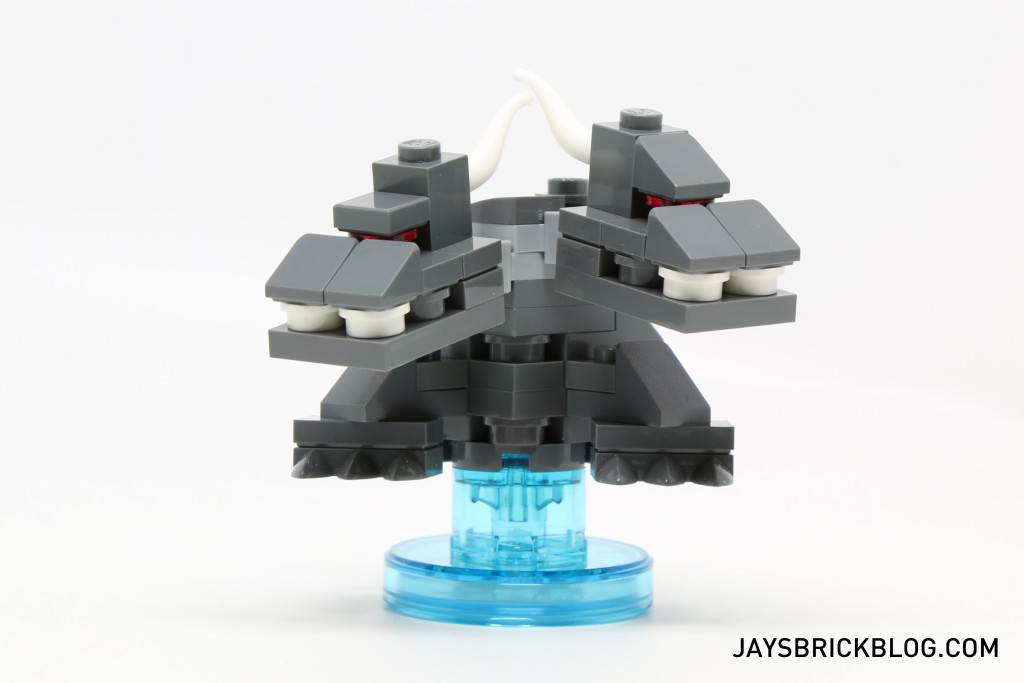 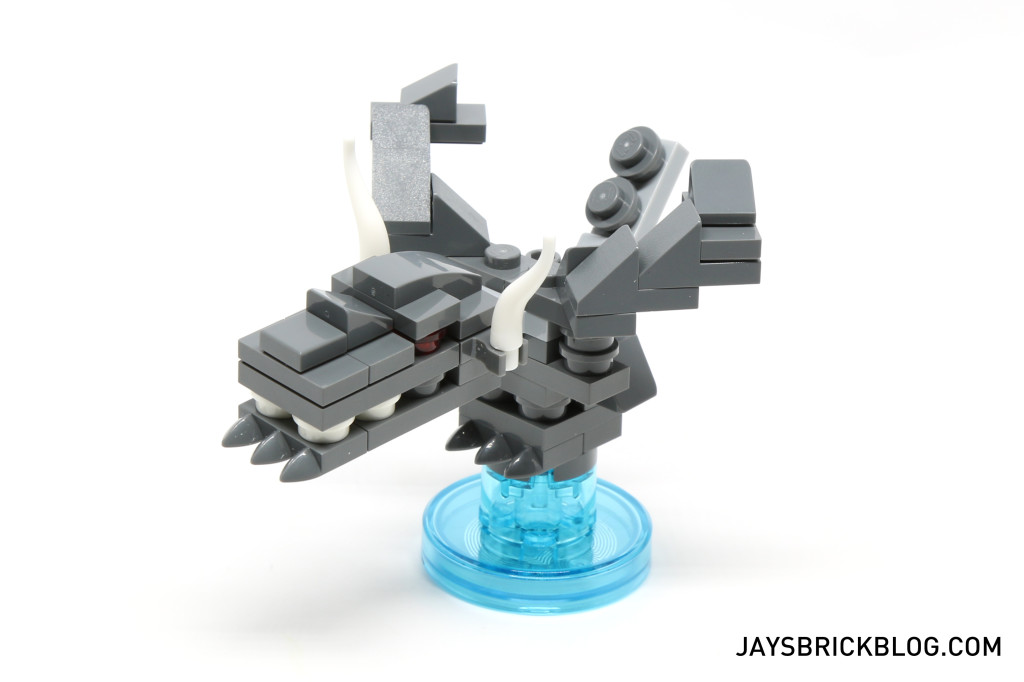 What happens when the Terror Dog skulls a can of Red Bull? It receives wings and transforms into the aptly named Soaring Terror Dog. The wings are made out of Slope Bricks with Cutout and layered upon each other. Again, I wasn’t very excited by this version. 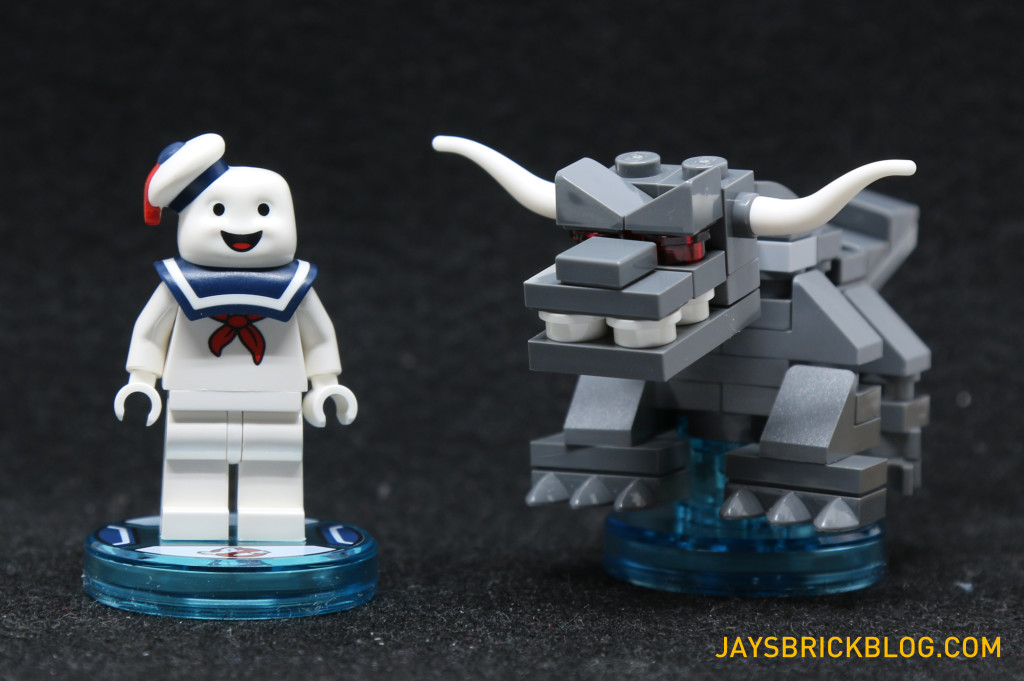 Final thoughts: Like all decent LEGO Dimensions Fun Packs, you’re really just paying a premium for a minifigure. Thankfully, the Stay Puft Marshmallow Man minifig is pretty damn special and quite honestly worth the price of the entire set alone.

If you’re a fan of LEGO Ghostbusters like I am, you owe it to yourself to get this set as you’re probably never going to see the Stay Puft minifigure in a regular LEGO set. You’re almost obliged to own one of the best characters/adversaries of cinema history in a cute minifigure form factor.

At this stage, I’d say that the Stay Puft Marshmallow Man is a frontrunner to be one of the best minifigs of 2016.

The Terror Dog is almost exclusively negligible. I wasn’t a fan at all, despite it being quite a prominent feature of the movie. Placed right next to Stay Puft, the Terror Dog just doesn’t hold a candle to the Marshmallow Man.

The design, while effective is plain boring and uninspiring. I immediately scrapped it for parts as I didn’t want to waste any display space for him. It’s just the nature of Fun Packs – the models that accompany the minifigures almost always seem to be a let down.

You should not pay over AU$20 for the Stay Puft Fun Pack. For LEGO Ghostbusters fans, the value contained in this set is pretty fair, considering how nice the Stay Puft minifig is but if you’re just a casual LEGO fan or prefer other themes, AU$20 will seem like poor value.

At the end of the day, unless you’re a die hard Ghostbusters fan or just want to add a very unique minifigure to your collection, this set, like all other LEGO Dimensions sets are pretty pricey and can be skipped altogether as you won’t miss out on much.

Personally, I was able to completely justify the cost, purely on the merit of the Stay Puft Marshmallow Man minifigure and am more than happy to display him next to my Ghosbusters crew. 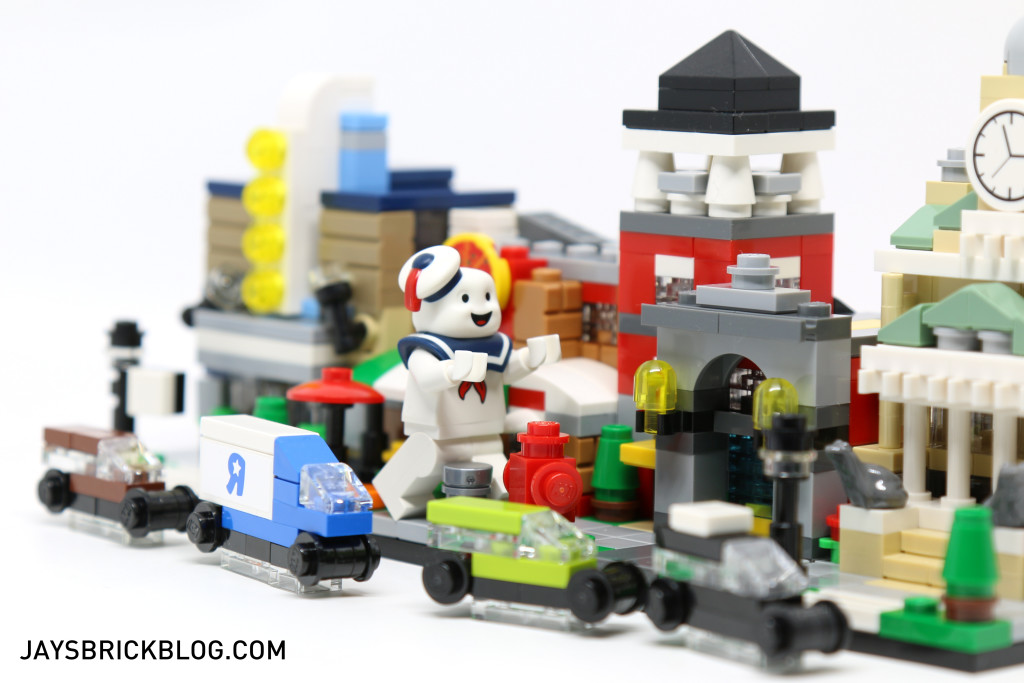 Thanks for reading the review! If you want to check out my other LEGO Dimensions reviews, I’ve previously wrote about the Unikitty Fun Pack and Portal Level Pack.

Leave a comment if you’ve fallen in love with the Stay Puft Marshmallow Man like I have or if you plan on getting any other sets from Wave 4 of LEGO Dimensions. The Midway Arcade set is mighty tempting, but the price just puts me off it!