After reviewing the LEGO Dimensions Adventure Level Pack featuring Finn the Human, it was only fitting to review 71246 Adventure Time Team Pack, which (nearly) rounds out the cast of LEGO Adventure Time minifigs with Finn’s best friend Jake the Dog, Lumpy Space Princess and BMO.

Like all of my previous LEGO Dimensions reviews, I’m only assessing the LEGO contents – I don’t play the video game and can’t comment much on the actual unlockables. 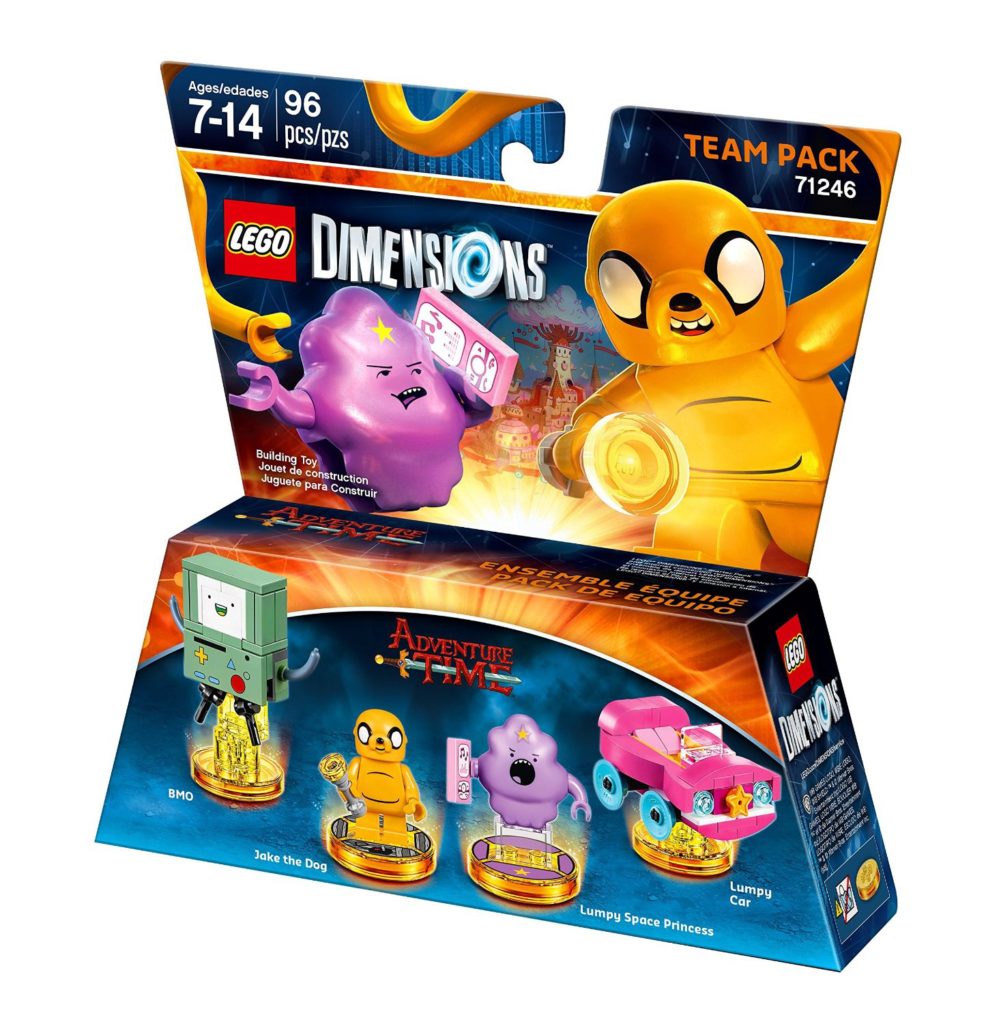 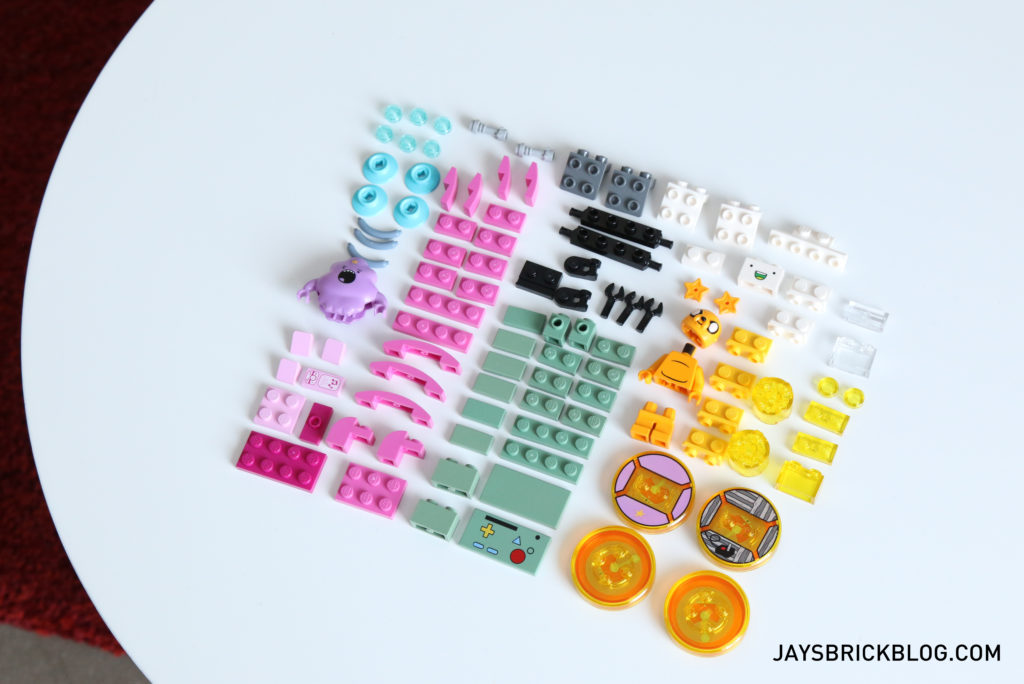 I’ve recently gotten into knolling my LEGO parts before I build them, so here’s a look at the contents of the Adventure Time Team Pack. Unlike most LEGO Dimensions pack and builds, this set is rather unique as it contains quite a number of interesting parts, in some very desirable colours – look at all that Sand Green!

There are also some really nice printed elements used in BMO’s build and you get three blue sausages! As far as I know, these are exclusive to this set. I really like that LEGO are making full use of the sausage piece and hope to see more colour variants in future sets.

If you’re a fan of Adventure Time, you’re going to love nearly everything about this set. You kinda need this set alongside the Level Pack with Finn as it’s almost criminal to separate the two of them. 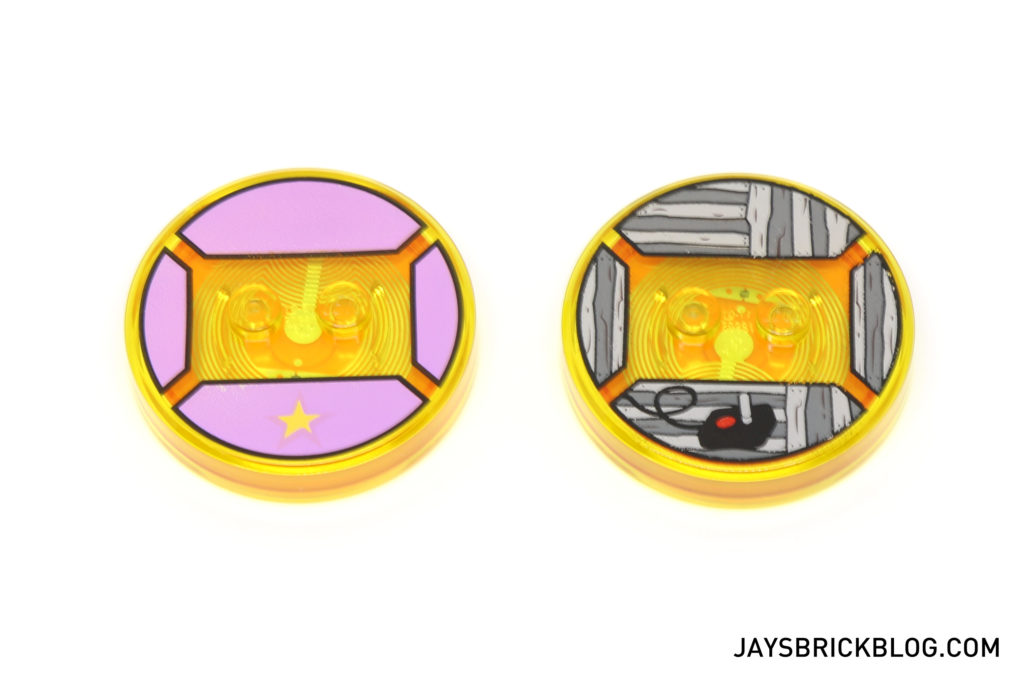 Here’s a look at two LEGO Dimension golden bases which are unique to this set. On the left we have Lumpy Space Princess’ pink but otherwise plain design, and on the right we have Jake’s which has a wooden floor and a video game joystick. 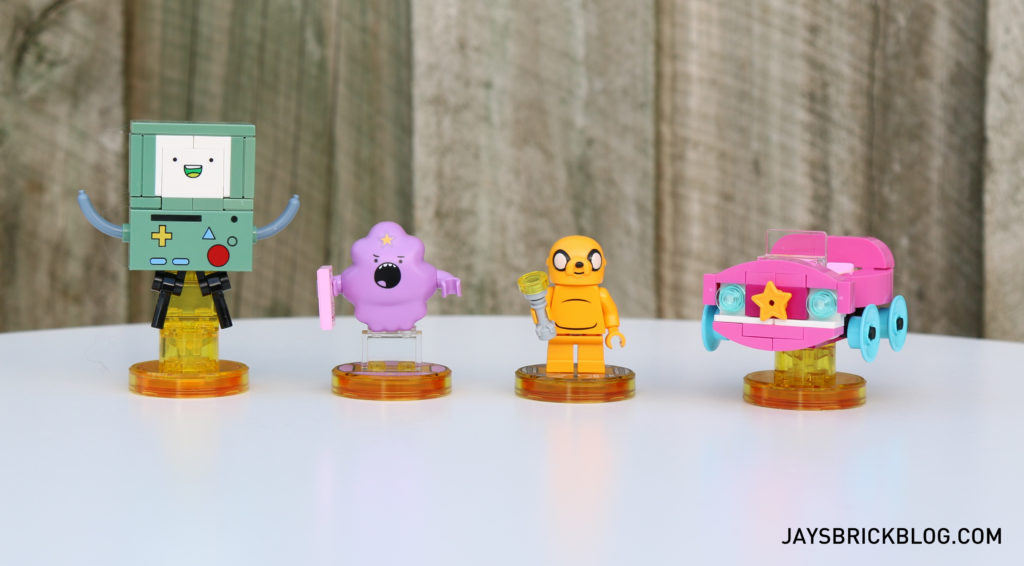 Here’s a look at the contents of the LEGO Dimensions Adventure Time Team Pack. Team Packs usually have two characters alongside two mini-builds but this Team Pack is unique in that you actually get three Adventure Time characters, the brickbuilt BMO being a bonus of sorts.

For a theme that is quite expensive, this represents fantastic value as you’re getting three major characters in one shot. 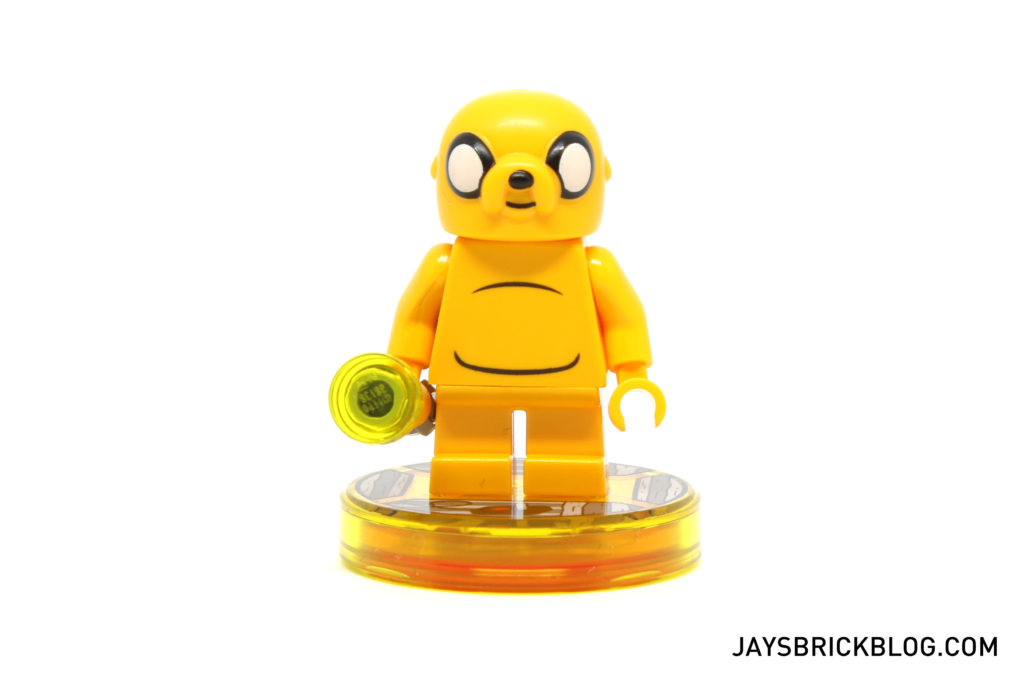 The Jake minifigure  is the obvious star of the set, being a main character in the cartoon and all. The LEGO designers have managed to capture his look quite well – he has a simple plain torso with a bit of a tummy and a custom moulded head as well. He comes equipped with a flashlight. 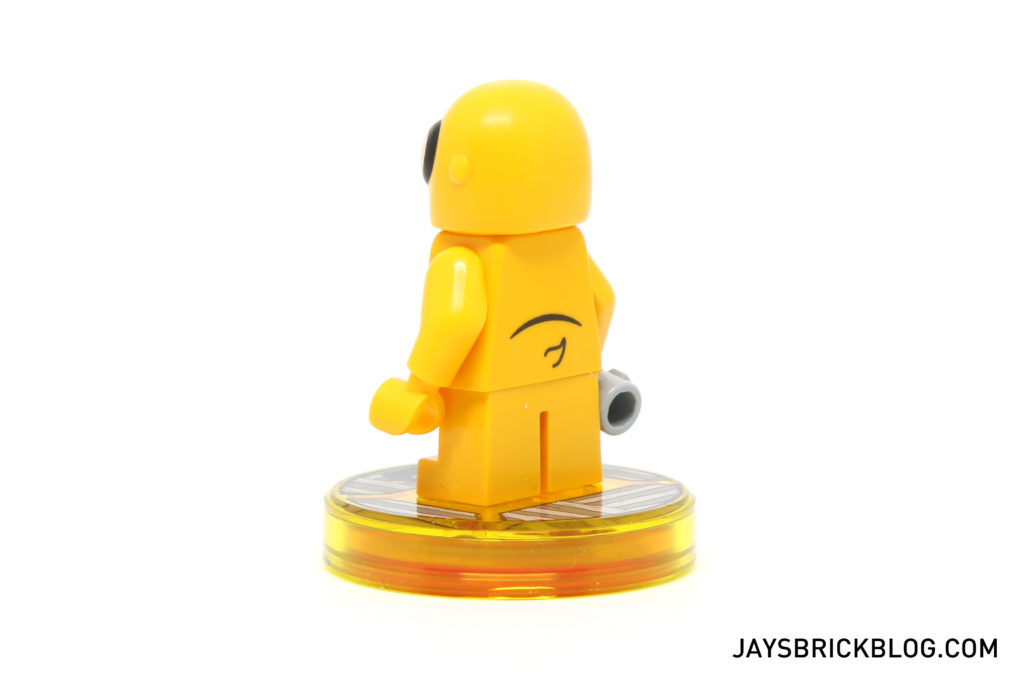 I was very happy to get some back printing on Jake, who is otherwise rather plain. 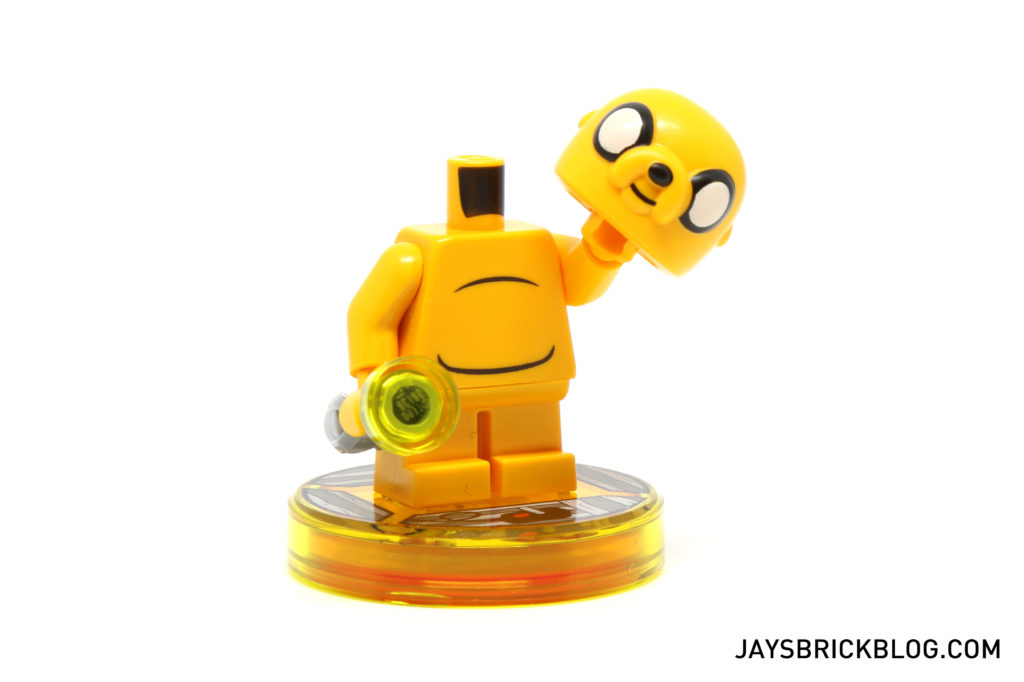 His unique head is moulded exceptionally well and there’s so much you can do with it.

This is Andrew Cookston’s excellent MOC of Jake in a variety of forms. For the uninitiated, in Adventure Time, Jake is a shapeshifting dog capable of taking pretty much any form.

Astute fans who own both this and the Level Pack will notice that the Jake minifigure and the Jakemobile come in different shades of yellow. Kind of a weird oversight from LEGO – this will probably bother most OCD people who are looking to display both of them together. 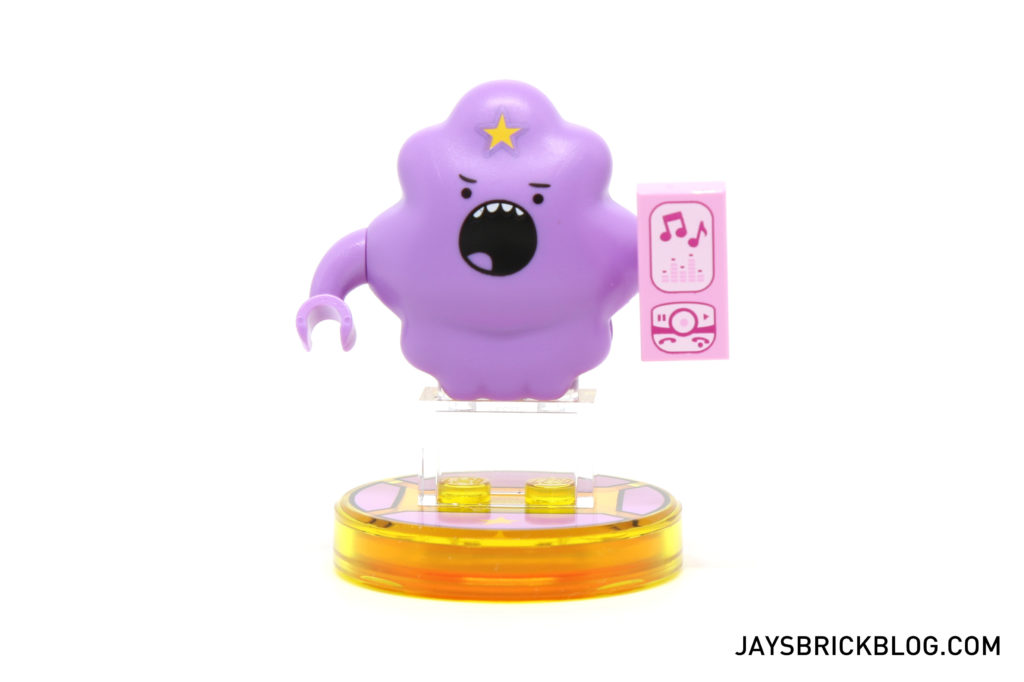 The second minifigure is none other than drama royalty herself, Lumpy Space Princess, otherwise fondly known as LSP. She looks like a floating purple cloud and is my favourite Adventure Time character of all time (along with Earl Lemongrab).

In case you’re wondering why I’m such a fan of her Lumpiness, please take 8 minutes out of your day to watch this excellent montage featuring the best of LSP. What the lumps right?

Anyway, Lumpy Space Princess is one big mould, with movable arms. I am very impressed that LEGO went out of their way to create a brand new mould for her, especially since they could’ve gone with some other humanoid characters instead to save costs. 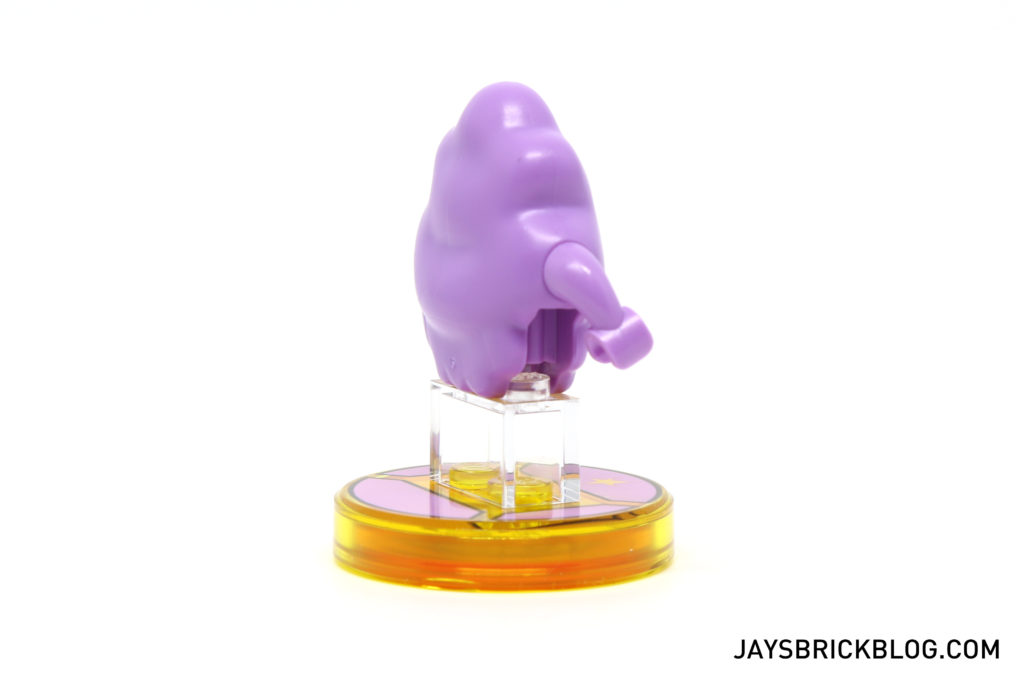 It was pretty confusing at first to attach her to the transparent brick but I got there anyway. There’s not a lot of clutch power between her lumps (sorry) but it sticks on fairly well once you get the hang of it. LSP comes with a mobile phone tile, so she doesn’t miss out on all the gossip in Lumpy Space. 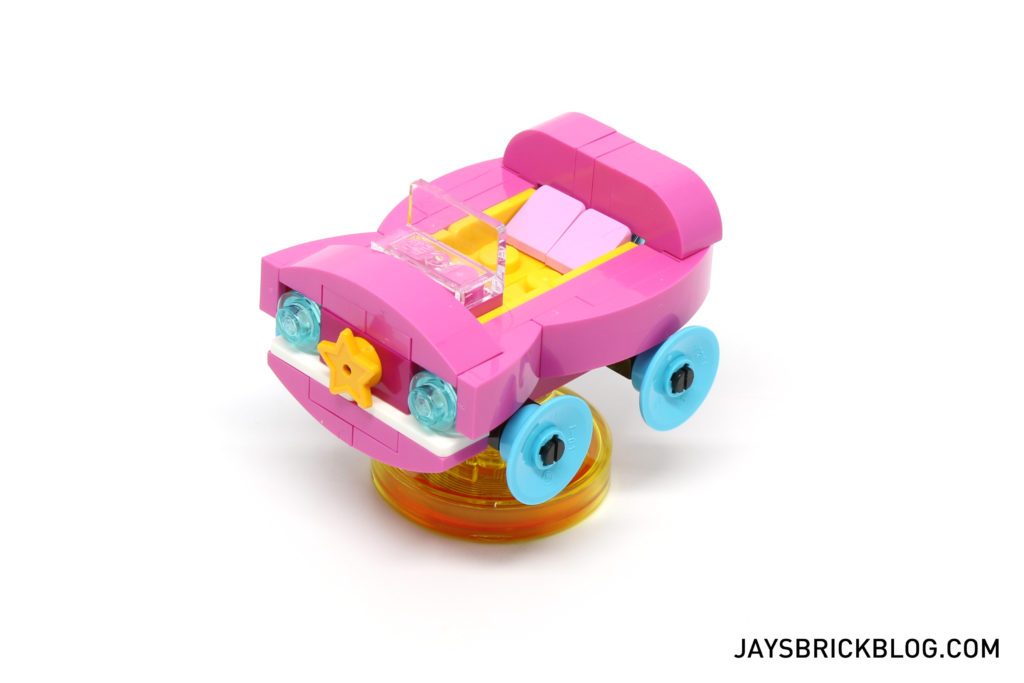 The primary build is the Lumpy Car – LSP’s favourite way to get around. The build is very clever, and you use plenty of curved slopes, built in all directions to achieve the car’s look. The design is super tight and its bright pink hue also makes it quite attractive to look at. 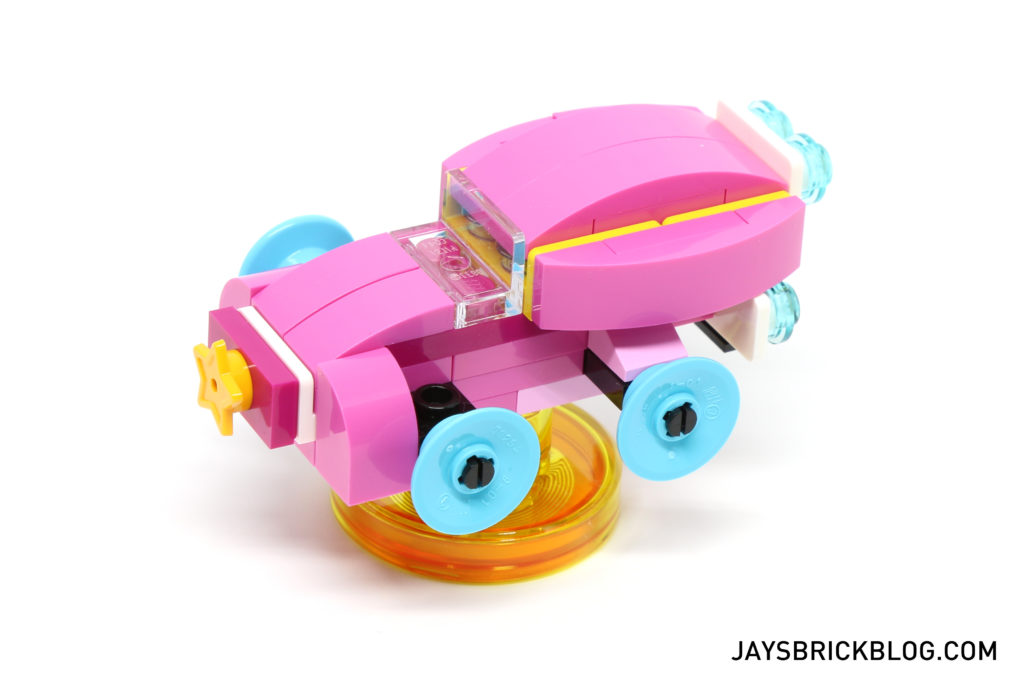 The first alternate build is the Lumpy Truck which also employs some really clever techniques as well. Unlike the Lumpy Car, the Lumpy Truck barely has any visible studs which gives it a very clean look.

That said, it looks more like a spaceship than a truck. 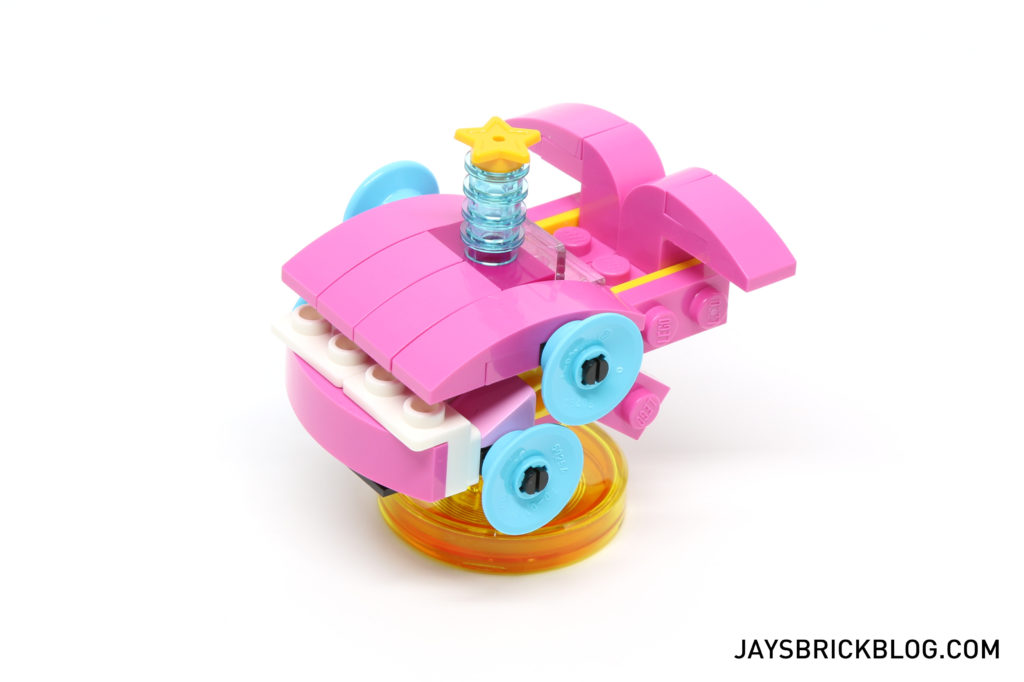 Last but not least is my favourite variant, the Lumpy Land Whale. I really like this one, mostly because it actually looks like a whale. From the large head to the baleen (whale teeth), tail and of course the water spout emerging from its head, the Lumpy Land Whale just looks utterly fantastic.

It’s one of the coolest non-character Dimensions mini builds yet, and I can see myself keeping it on display instead of chucking it into the parts bin. 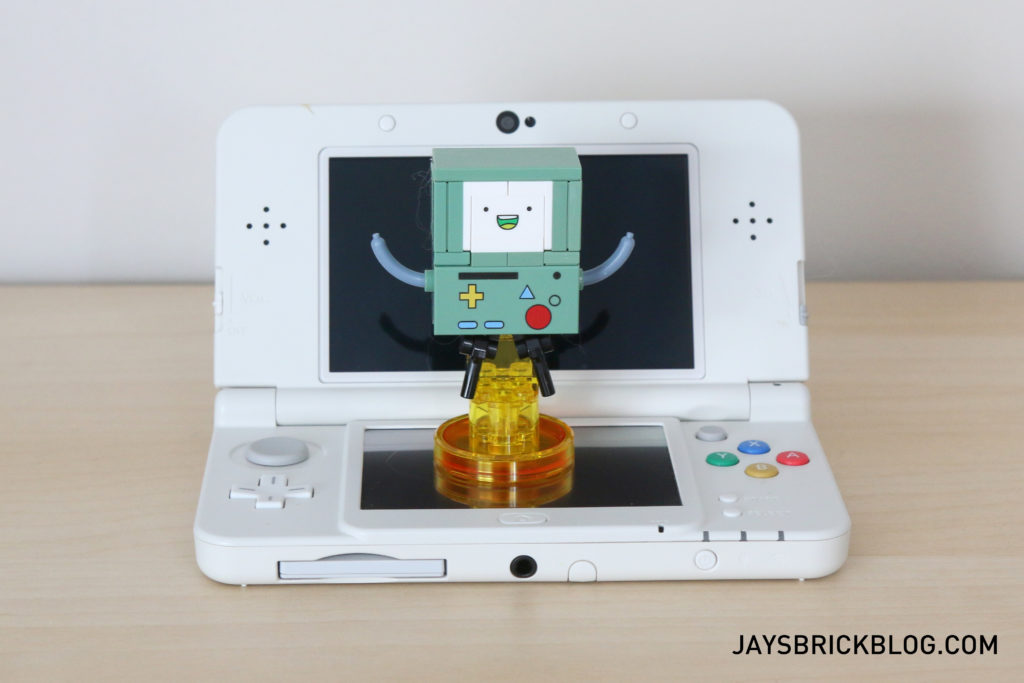 All that pales in comparison to the best part of the set, BMO the handheld video game console and roommate of Finn and Jake. BMO is entirely brick-built, sporting printed elements for his face and a 2 x 4 printed tile for his buttons.

I really love those cute little blue sausages for arms. 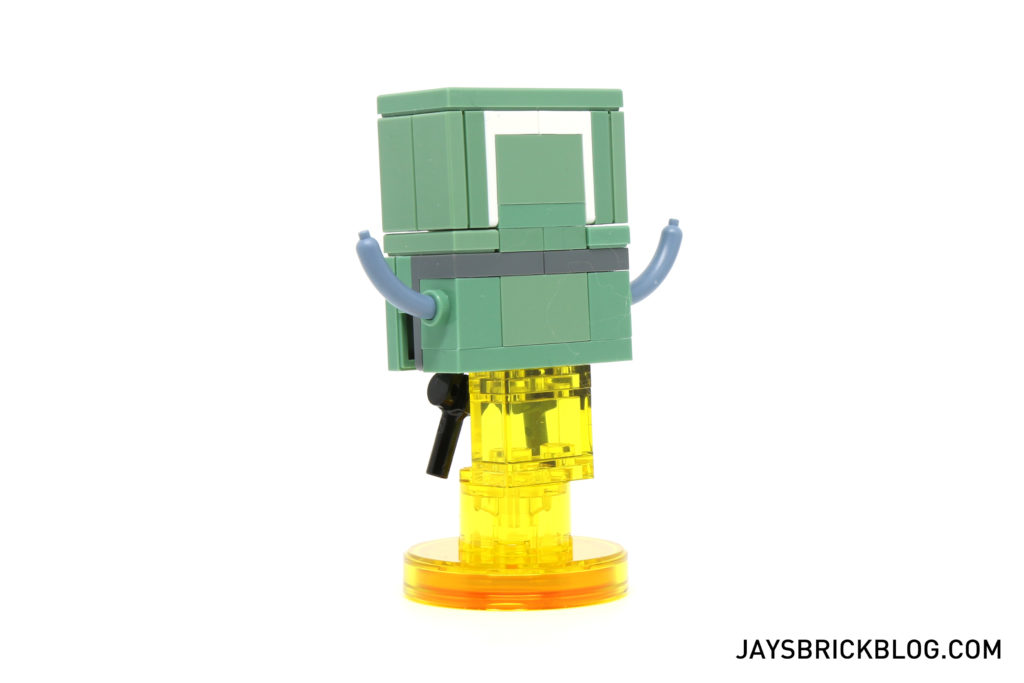 Here’s a look at BMO from behind. The colouring of my sand-green bricks were a little inconsistent and the gaps are a little unsightly, but there are minor flaws.

It’s a little greedy, but I think BMO could’ve been improved if his face brick had printing on both sides so that we could swap expressions, but for the most part, LEGO have nailed the cuteness of this little Gameboy-inspired character. 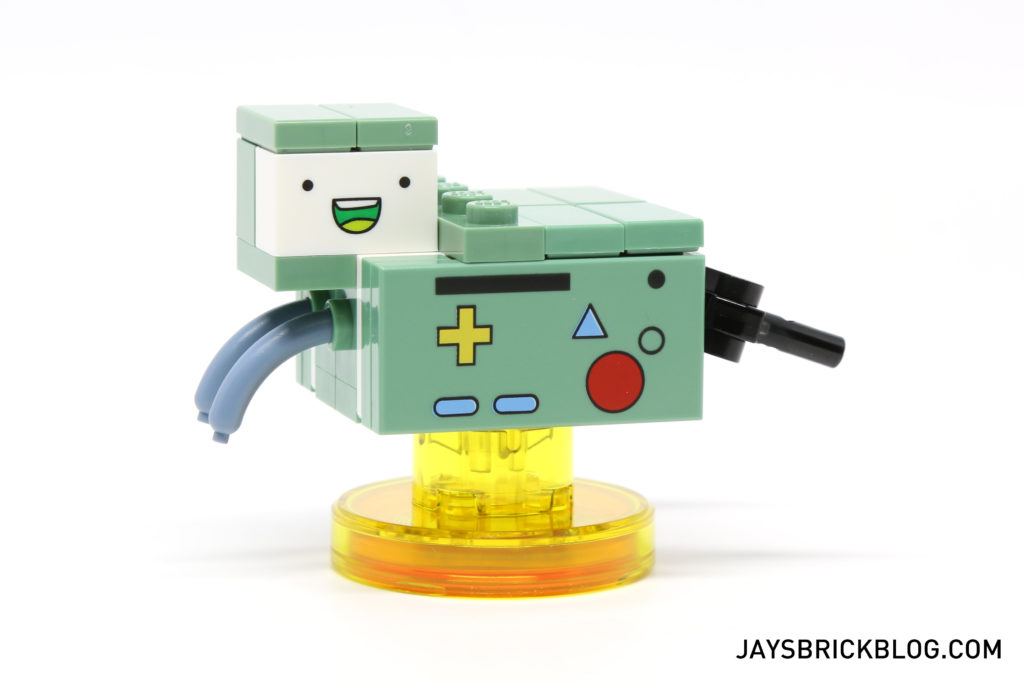 BMO has two alternate build, the first being DOGMO where he takes the shape of a… dog. The legs are the back look a little weird and this isn’t my favourite variant. 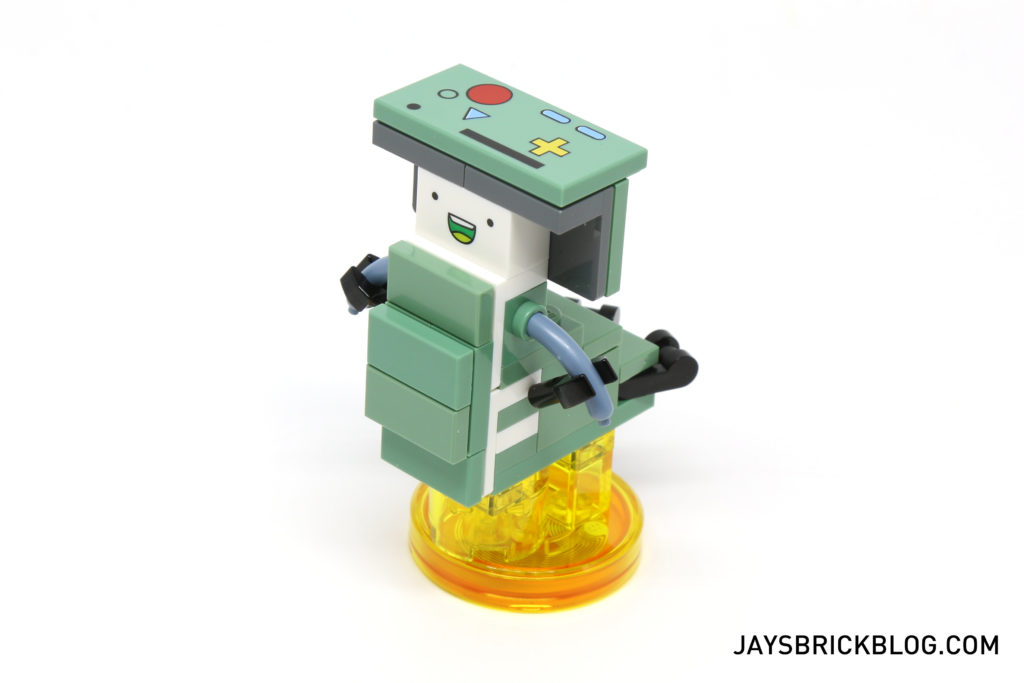 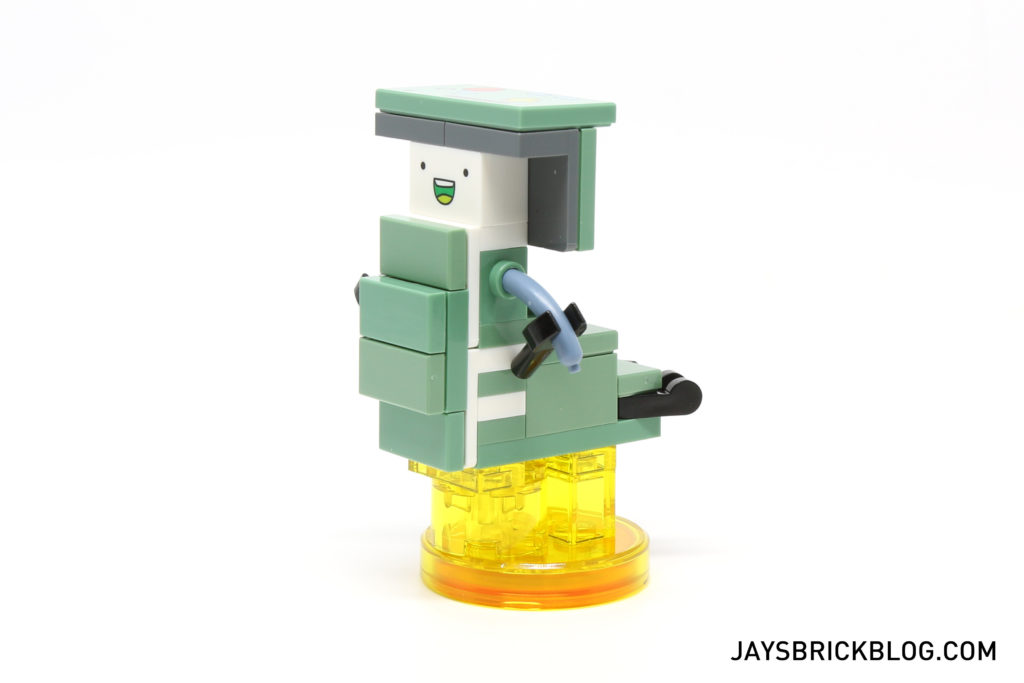 BMO’s second form is slightly cooler – SNAKEMO is a cobra-looking transformation of BMO and this one has slightly more personality. I really like SNAKEMO’s hood and overall shape.

That said, these two alternate forms are inferior to BMO’s original shape as a handheld console which is what I imagine most fans will stick to. 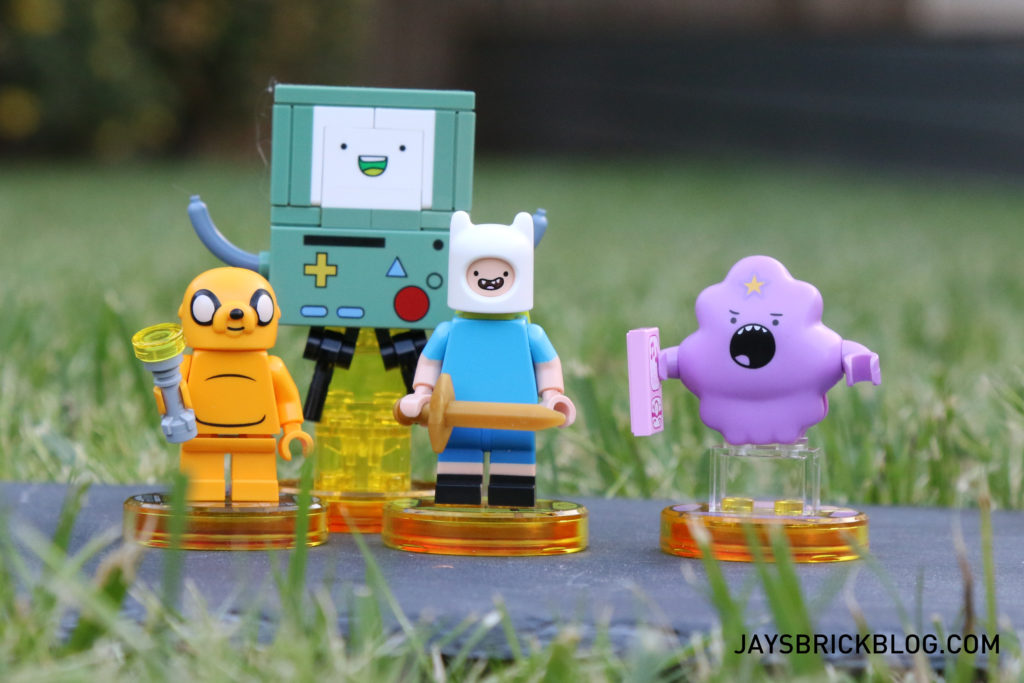 Final thoughts: Even if you didn’t manage to snag this set for $13 during the LEGO.com sale, the LEGO Dimensions Adventure Time Team Pack still makes for pretty decent value, especially if you’re a fan of the animated series.

I bought these from Target at nearly full price, but even then, I was very happy with what I got. Jake, Lumpy Space Princess AND BMO translate into exceptional value that you don’t normally get from LEGO Dimensions sets.

If you’re a fan of Adventure Time like me, having the gang together as you can see in the photo above is incredibly delightful – they just look so good assembled all together. All that’s missing is Marceline (a Big W exclusive that’s delayed till December in Aus) and hopefully, Princess Bubblegum and you’ve got everything an Adventure Time fan could want. 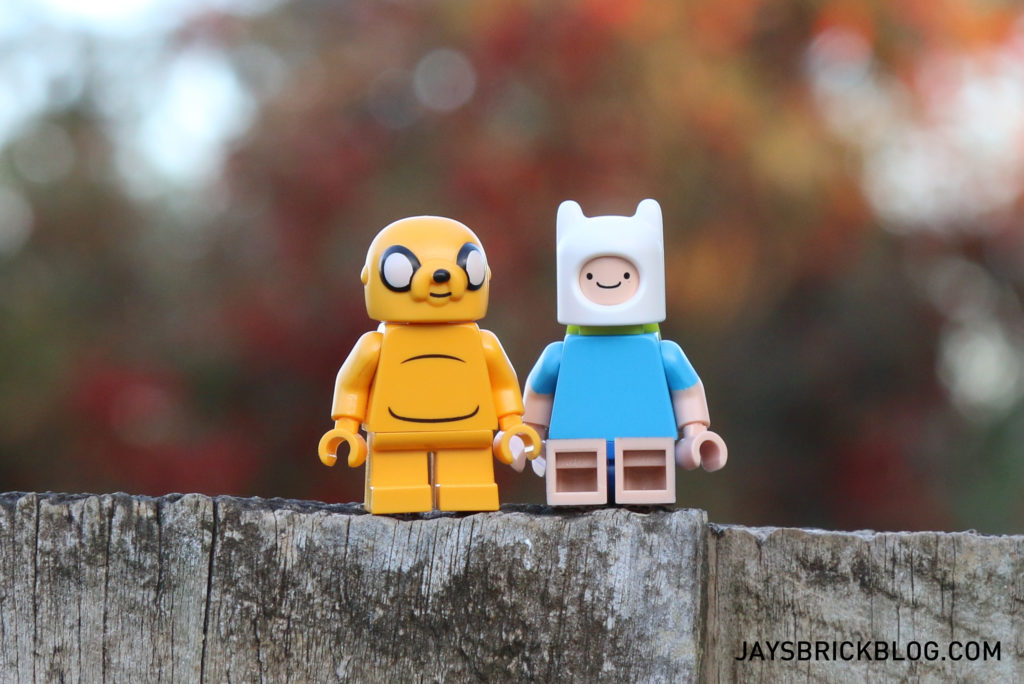 BMO is the highlight of the set, but really, you’re really getting this set to reunite Finn with his best friend, Jake.

This set is a lot of fun, and I was also fairly surprised that I enjoyed the Lumpy Car variant builds – I did not expect the build to contain some pretty neat techniques and it was rather enjoyable if short.

So all in all, I can’t help but recommend this set if you’re a fan of Adventure Time. I would even rate is slightly above Finn’s Level Pack for overall satisfaction, since you effectively get three characters in one pack.

It just feels a lot more complete and you feel like you’re getting your money’s worth.

Thanks for reading the review! Check out some other LEGO Dimensions reviews or the Review Hub if you’d like to explore some of my other LEGO reviews.

If you haven’t seen my post on having fun with Finn heads, I highly recommend it. Be sure to see why I rate Finn as one of the best minifigures in 2016.

Did you manage to get the Adventure Time Team Pack for cheap? Are you a big fan of the video games and have unlocked these characters? I’d love to hear your thoughts in the comments section! 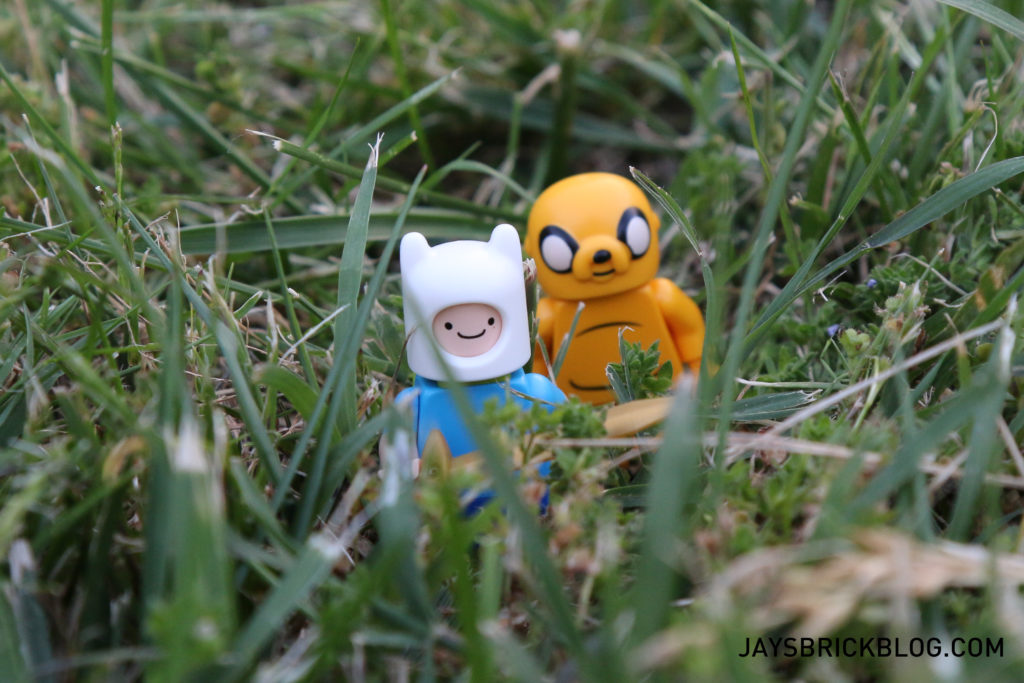 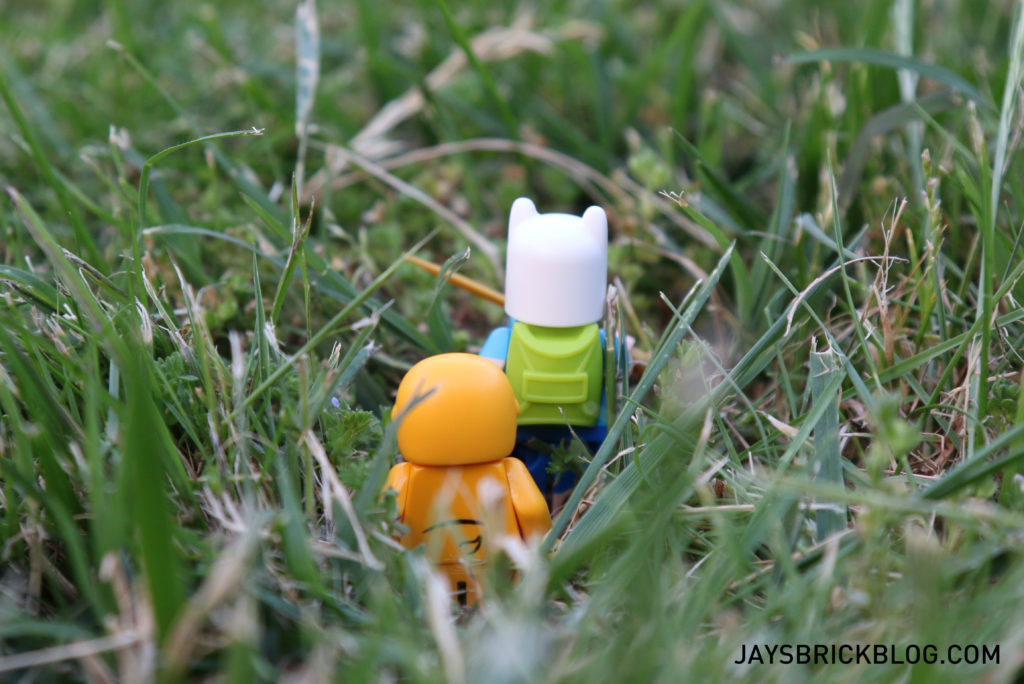