Stuck being sick at home has its merits in me having time to build and write about some of the newer sets I managed to get my hands on. The Summer wave of Star Wars sets brought along with it the Planet Sets Series 2, following the successful first outing where we got globes of the Death Star, Tatooine and Naboo. Now I’m not the largest Star Wars fan around but I do concede that I have a soft spot for anything to do with the original trilogy. For series 1, I bought the Death Star (because who wouldn’t want a Death Star Christmas tree ornament??) and for Series 2, I opted to get Endor and Yavin 4, namely because the AT-ST and X-Wing are one of my favourite vehicles in the universe.

I own the 7657 AT-ST and it’s quite close to my heart, on permanent display on my desk 🙂 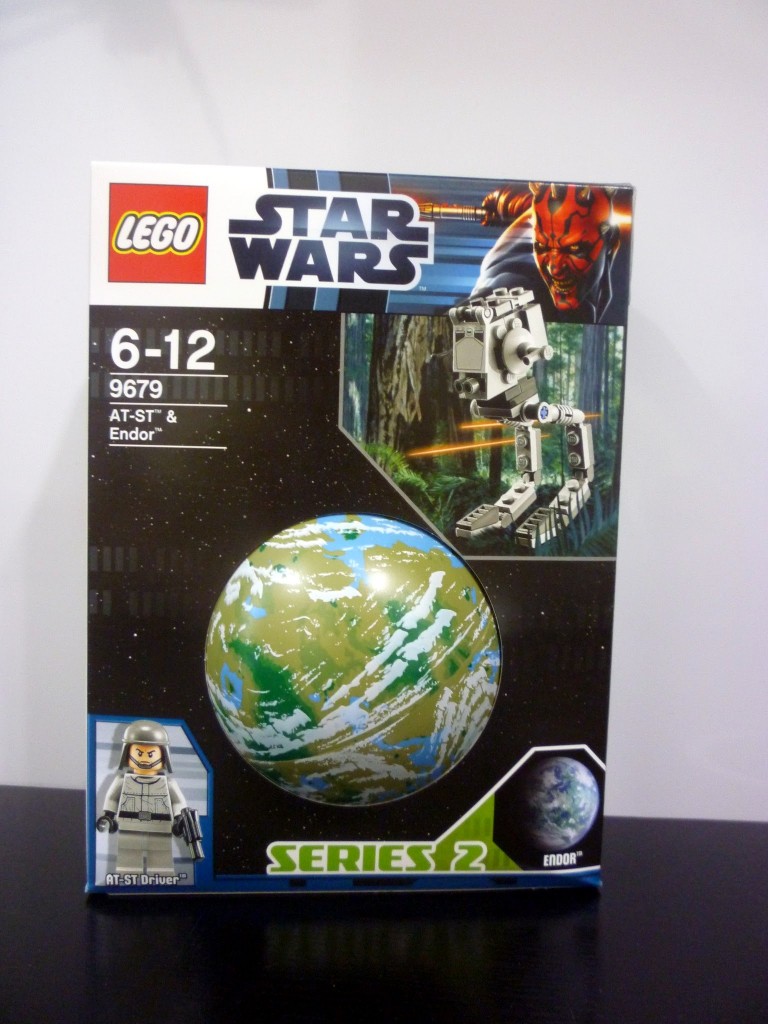 The Planet Sets are Lego’s take on on Gashapon where you get miniature toys hidden inside plastic capsules, except in this case, we get a miniature Lego build of an iconic spacecraft or vehicle sealed within a large plastic globe that’s modeled after planets within the Star Wars galaxy. You also get a bonus minifigure, which is most often the pilots of said vehicles. 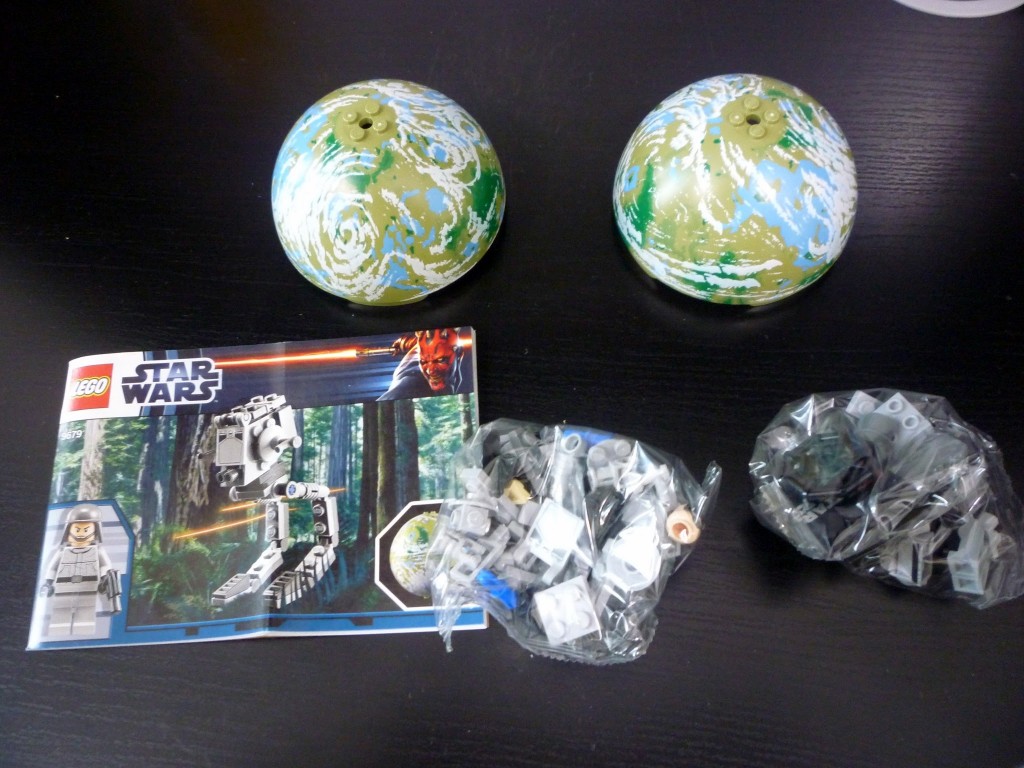 Pop open the globe and you’ll find two plastic bags of pieces, while the instruction manual is tucked deftly inside the box. The globes split apart with ease and thankfully in this case, my manual didn’t get mangled or creased too badly. First thing to build, the minifigs! 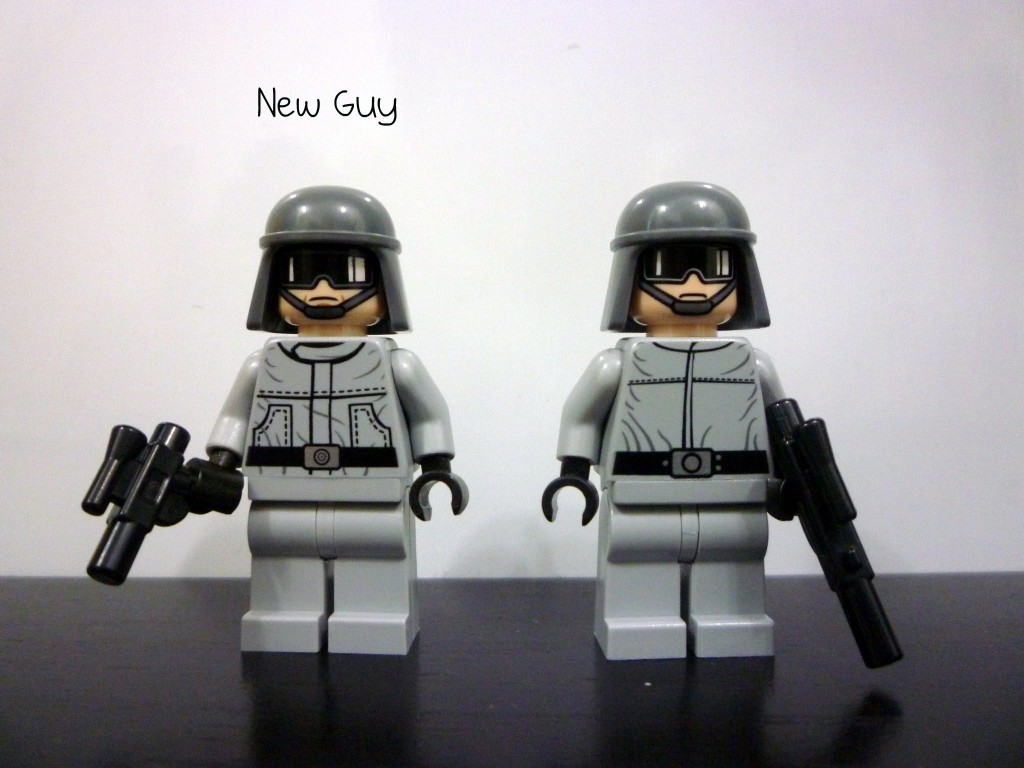 I used the AT-ST driver from 7657 to contrast some of the improvements made to the newer minifig included. We get a shorter blaster and not a full-sized rifle, which is cool for me as I don’t own any of the smaller pistol-looking blasters. The headgear is exactly the same but there’s a tiny difference in the face. For one, the New Guy’s face has lines around his mouth, which still looks stern. The New Guy’s goggles are also a shade darker. You can also notice quite a large improvement in the uniform’s details with more prominent stitching as well as pockets! 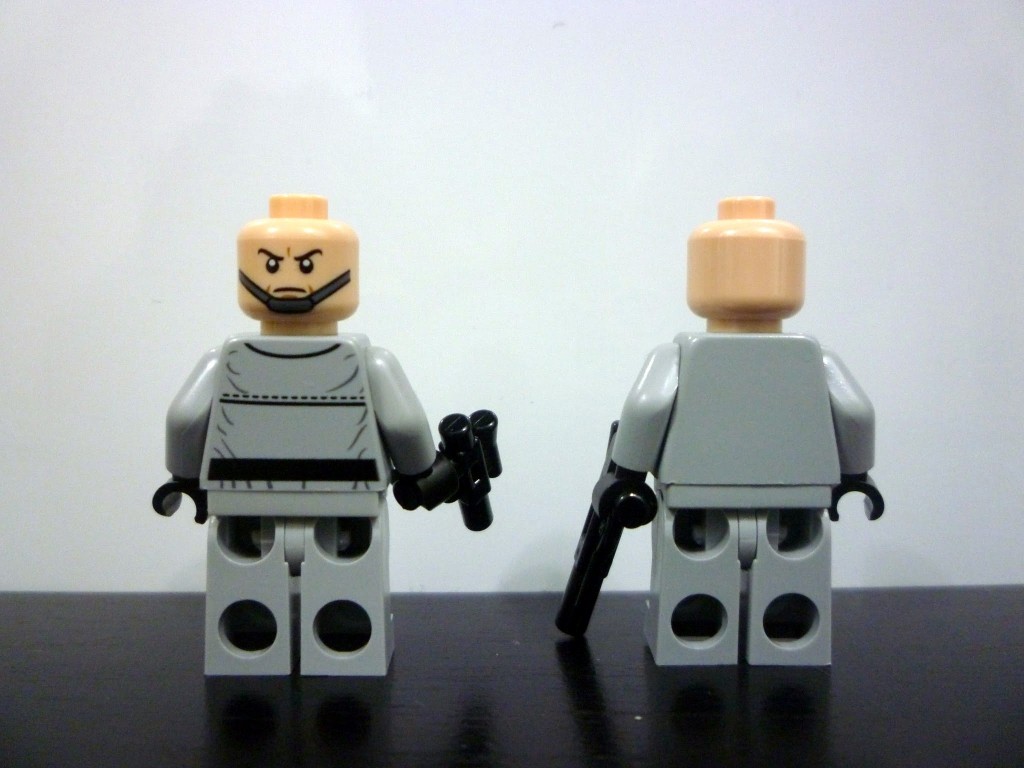 Thankfully, to keep with the times, the New Guy sports a reversible head where he looks visibly irritated that he’s without his goggles. I guess driving an AT-ST around the forest moon of Endor isn’t the most pleasant of jobs… what with having to deal with pesky Ewok infestations and all. Another great improvement is back-printing, yay! 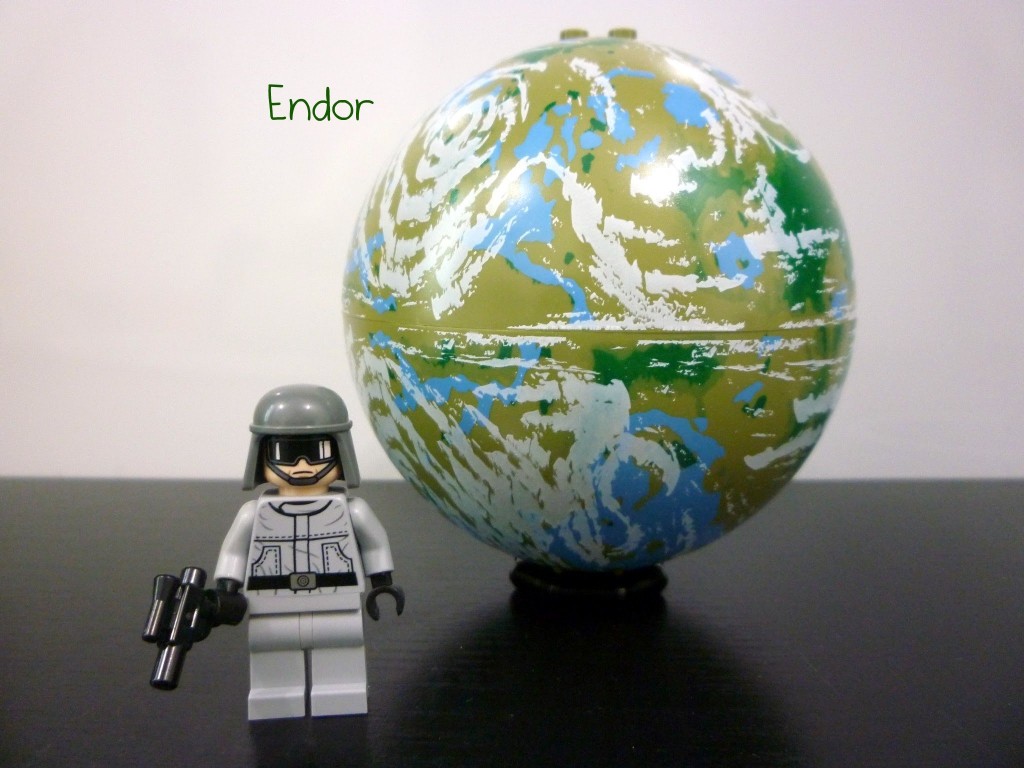 Here we have Endor snapped together with the driver to give you a sense of how large it is. The planet has studs on both its north and south poles. The planets themselves are pretty okay and make for geeky Christmas ornaments come December. Endor’s the forest moon in Return of the Jedi where the Rebel forces go to disable the Shield Generator to blow up the Death Star once again. It’s fairly uninteresting, since it looks a lot like Earth, with oceans, swirling clouds and land masses. Frankly, it just looks like a dirty marble, or one of those rubber bouncy balls. You might know Endor as the homeworld of the adorable Ewoks. 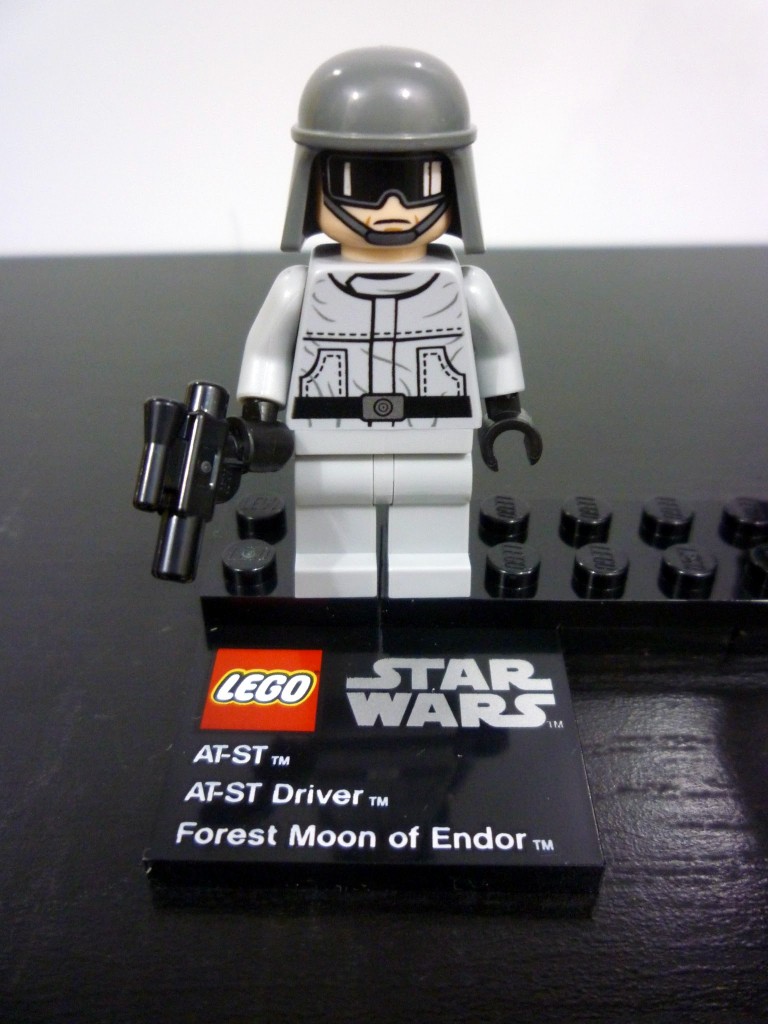 The set comes with a very nice printed tile with details of the vehicle, pilot and planet. 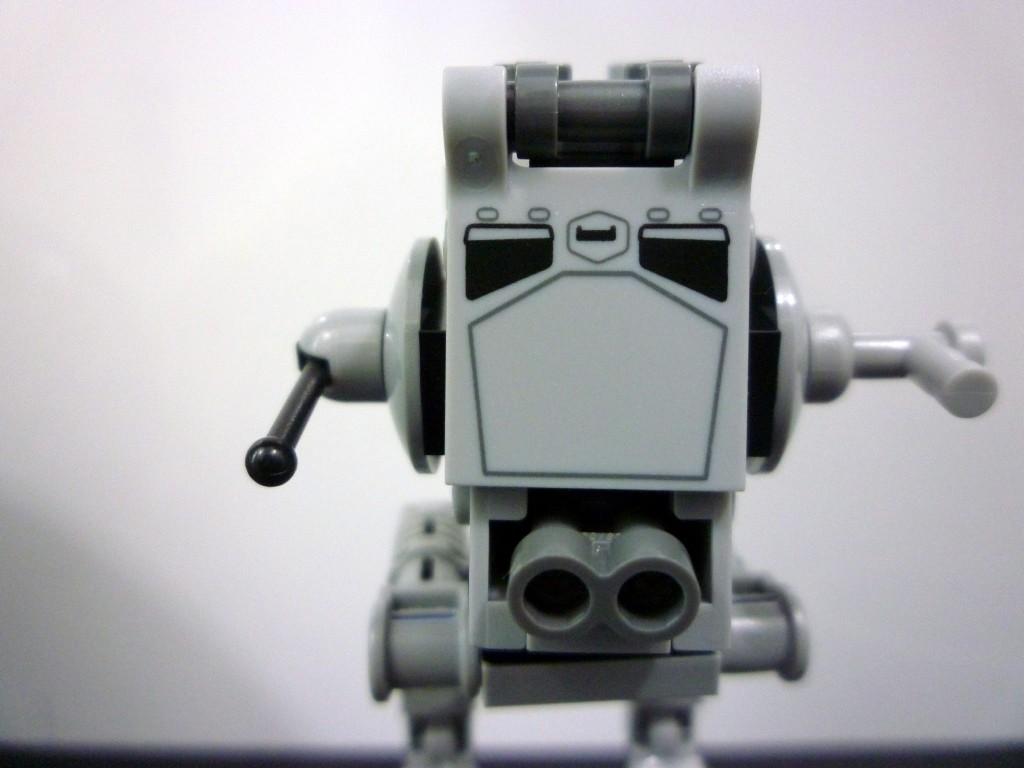 On to the AT-ST itself. We’re treated to a printed flap which does an okay job of representing the front of the AT-ST for such a miniature sized model. The build is alright, although I wasn’t too happy with the scale. It seems like the cockpit area seems a little bit too narrow for my liking, although they managed to get the AT-ST’s chicken walker leg look down pretty accurately. The use of an antenna piece as a turret is great, but the tap piece on the right doesn’t jive well with the model. 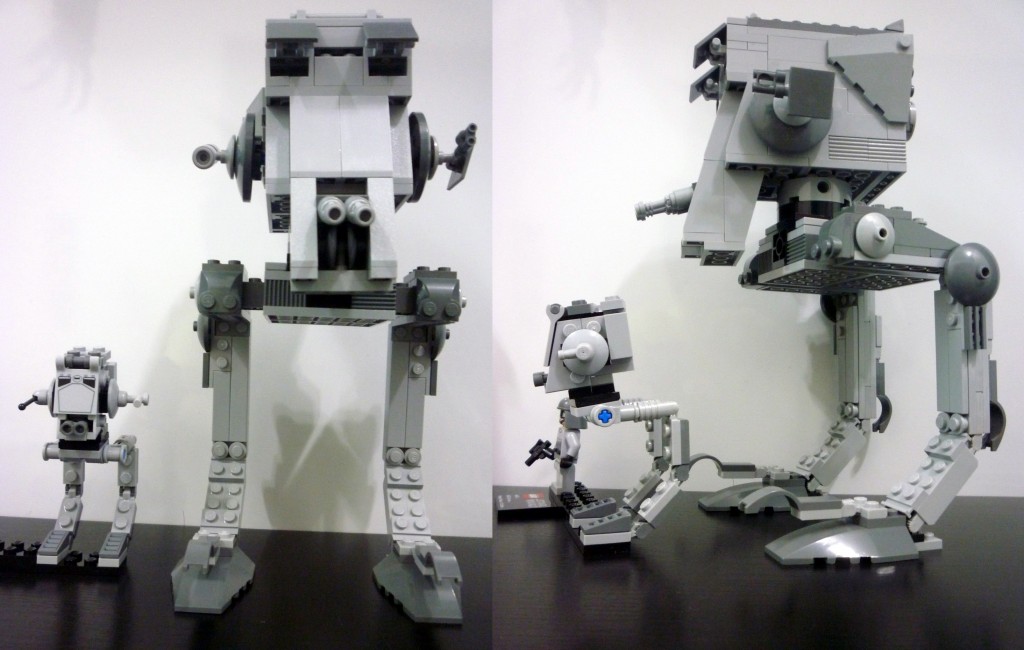 Here’s the AT-ST next to its properly-sized big brother, the 7657, which I reviewed here and is one of my favourite sets that I own. If they managed to expand the turret slightly to make it look a little bigger, the whole model would’ve looked a lot nicer, imho. One plus point is that its head swivels just as a proper AT-ST should. 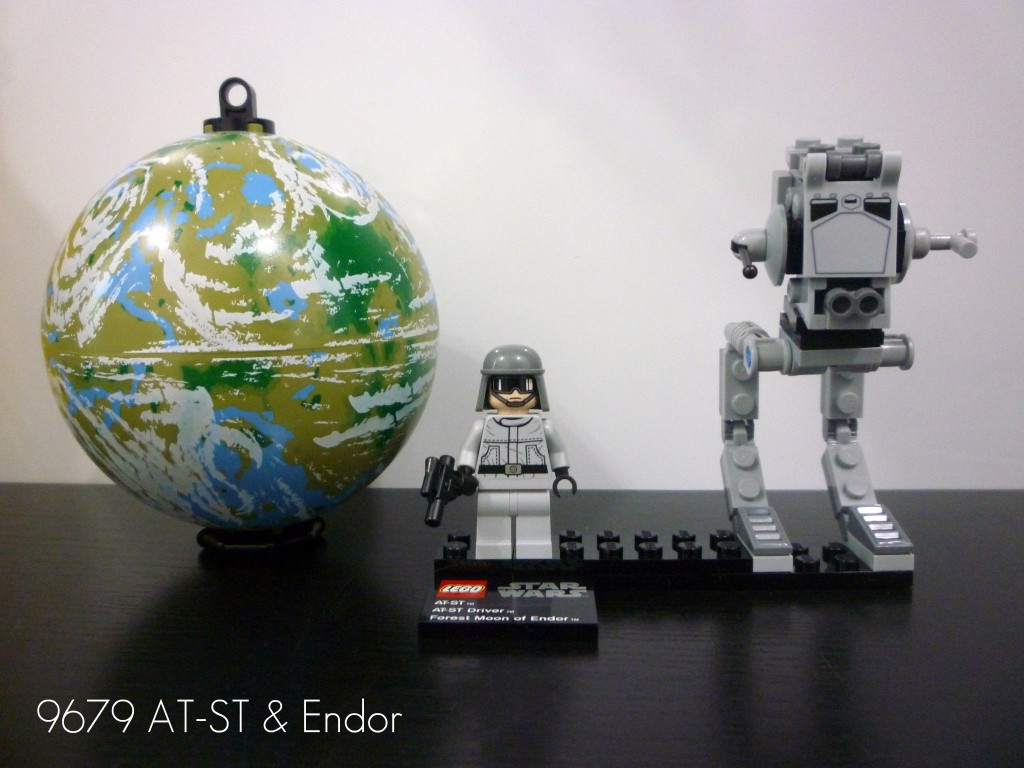 Final Thoughts: Even as its supposed to represent a miniaturized version of the AT-ST, I felt that it was pretty underwhelming for a Planet Set. I felt that while Lego did a pretty decent job of making the AT-ST fun-sized, they missed out on making the cockpit look a little larger, possibly to cater to the size of the printed flap. The updated pilot was nice, but as an overall planet set, it’s mediocre at best.

Should You Buy It?: At RM50, it’s a little steep and unless you’re a die-hard Planet Set collector or AT-ST fan (like I am) I’d be hard pressed to recommend the set. For about 20ish ringgit more, you can possibly net yourself a Endor Battle Pack which has a lot more value, imho. As a display set, it’s not that great either with the planet itself looking drab and boring. If you can find this on sale, buy it – if not, you could skip this and not miss out on much.

« Review: 9472 – Lord of the Rings – Attack on Weathertop
Pick A Brick Confirmed for Legoland Malaysia »