Dorling Kindersley (DK) has been on a roll lately, releasing some really great LEGO books in the past few weeks. I received I Love That Minifigure in the mail several weeks ago and now that the embargo has been lifted, I’m honoured to be able to share my short review of this set.

Thanks once again to DK Australia for sending me a review copy!

You can purchase I Love That Minifigure from Penguin Australia’s online store for $29.99 or find it in your local bookstore. 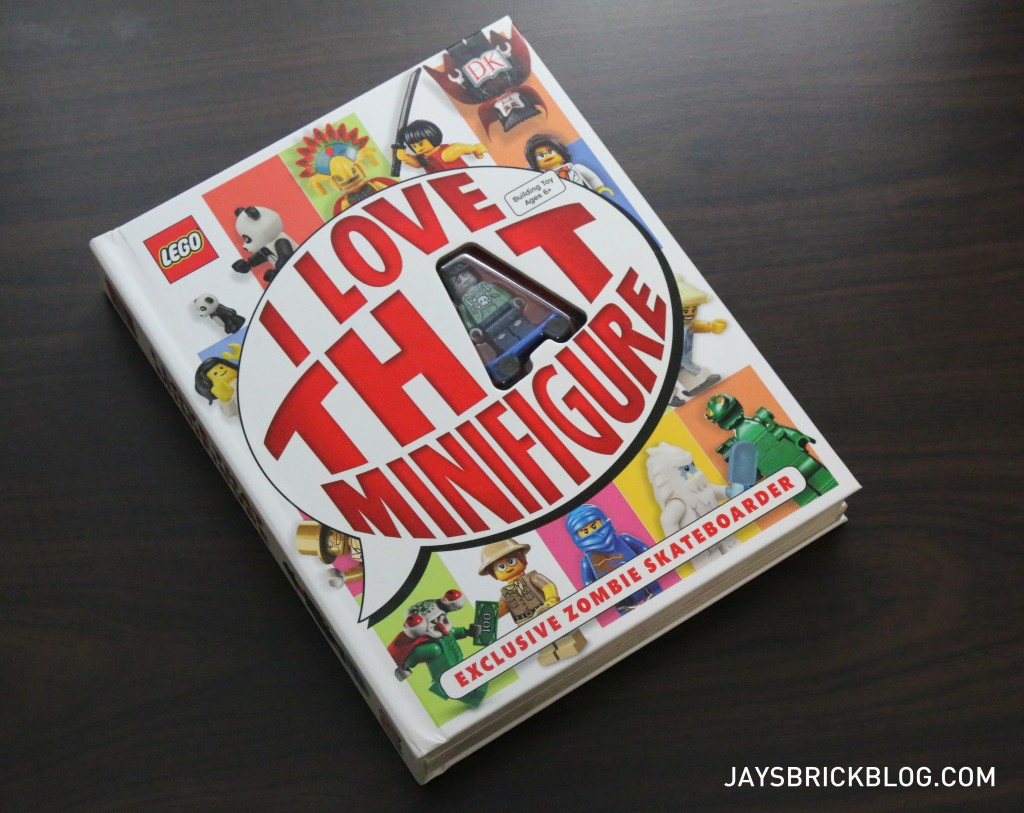 I Love That Minifigure’s cover evokes a very playful and kiddy vibe so it’s immediately apparent that they’re marketing this title towards younger kids instead of seasoned AFOLs. The Zombie Skateboarder is displayed prominently in a transparent plastic window, giving you a pretty good look at the exclusive minifigure. 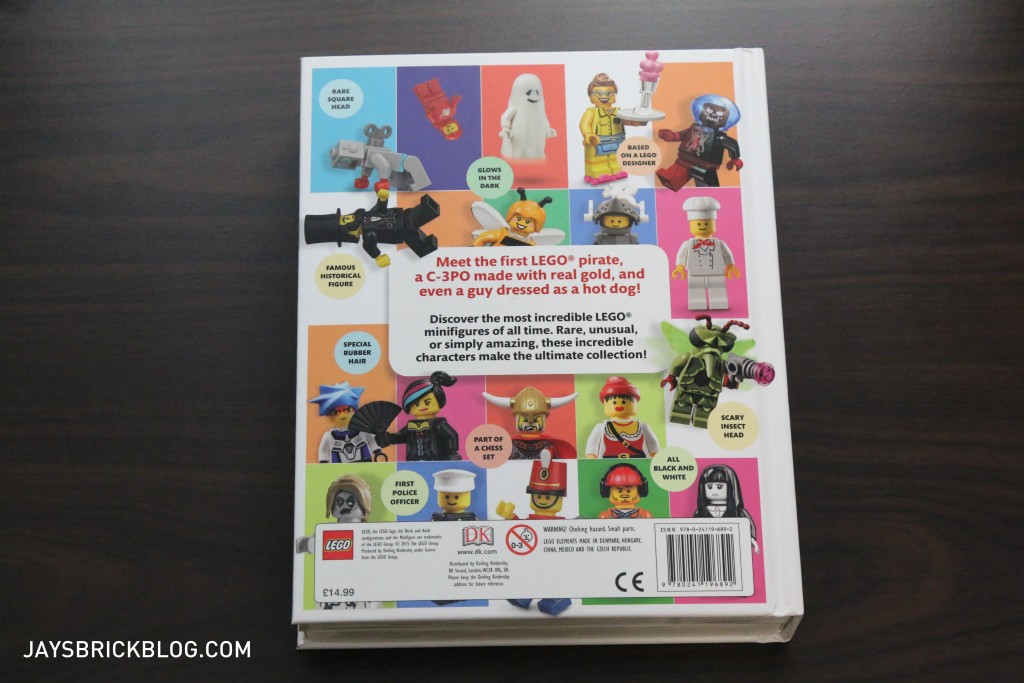 Behind, the grid continues with a little more information about the contents of the book. The selection of minifigs featured gives you a pretty good idea of what to expect in the book.

The book is a lighthearted guide to LEGO’s incredibly huge world of minifigures. Split up into 11 themed sections such as Every Day Heroes (regular cityfolk) to Out of This World (space) to All Time Icons (Pop Culture), the book does a decent job of covering as much ground as possible. It’s quite a small book (about the size of a regular iPad) so don’t expect an extensive history of LEGO’s minifigures in this book. 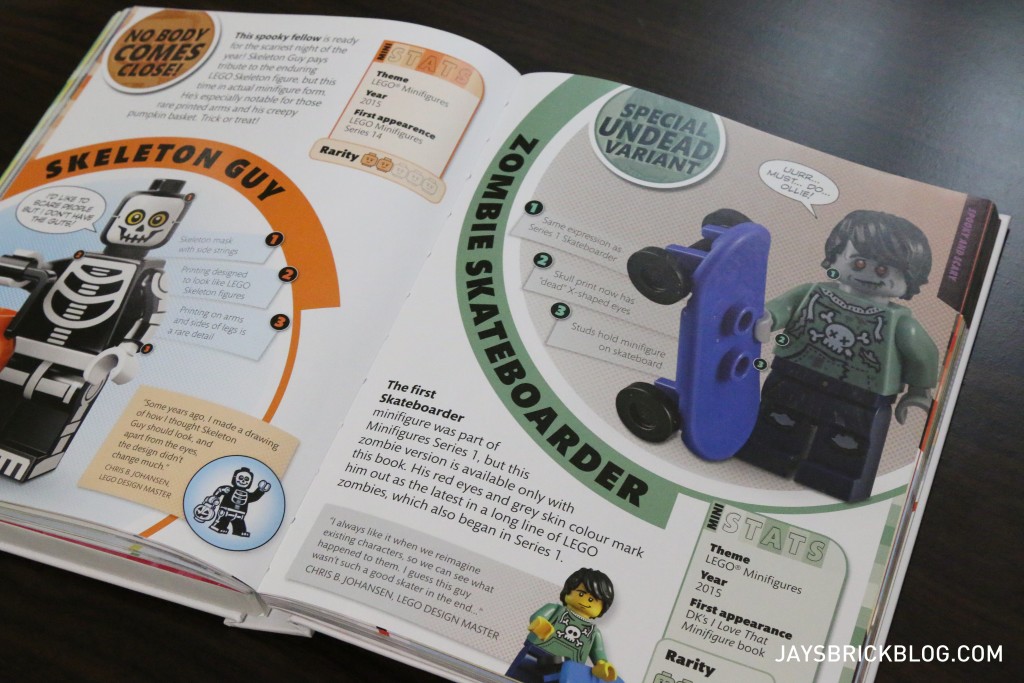 Each minifigure featured in the book occupies a single page, allowing for plenty of space for background information, trivia and interesting facts about the minifigure. As this book seems to be aimed at younger readers the language used is pretty basic – if you have a young child that is just beginning to read and loves LEGO, I imagine that this book will be a great tool to introduce them to new words and phrases. 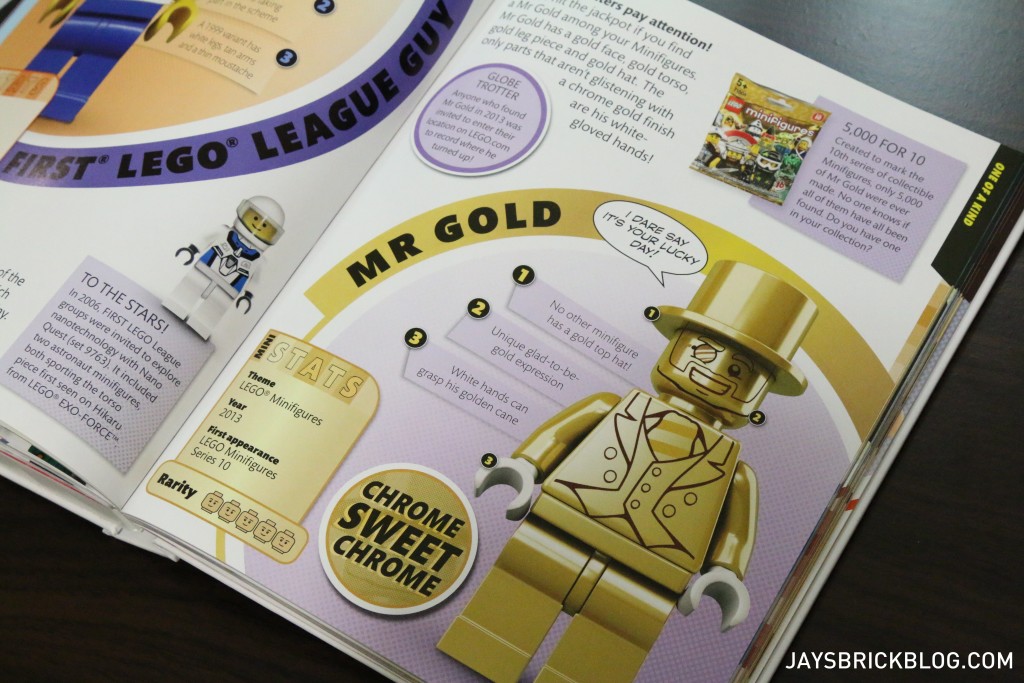 A rudimentary 5-point “Rarity” scoring system is assigned to each minifigure. 1/5 translates to “Not Really Rare, but still cool” and 5/5 corresponds with “Very Rare – a legendary minifigure”. Mr Gold and other uber-rare exclusives like the Comic Con minifigures are naturally scored with maximum marks.

Take the scoring system with a grain of salt – more seasoned LEGO fans will probably disagree with the arbitrary scores but keep in mind that this book is meant for kids. 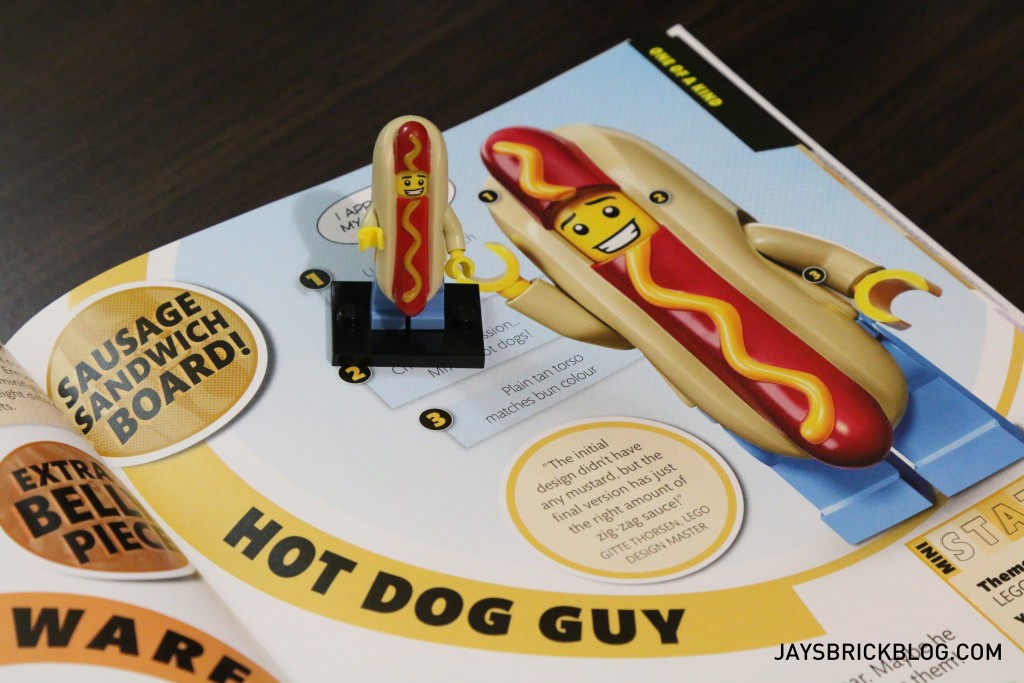 Throughout the book, you’ll encounter plenty of familiar and notorious minifigures such as Hot Dog Man. Curiously enough… they misnamed him as Hot Dog Guy when his name should be Hot Dog Man (as per the official character description) but he’s commonly recognised as both, so it’s not too big of an issue. 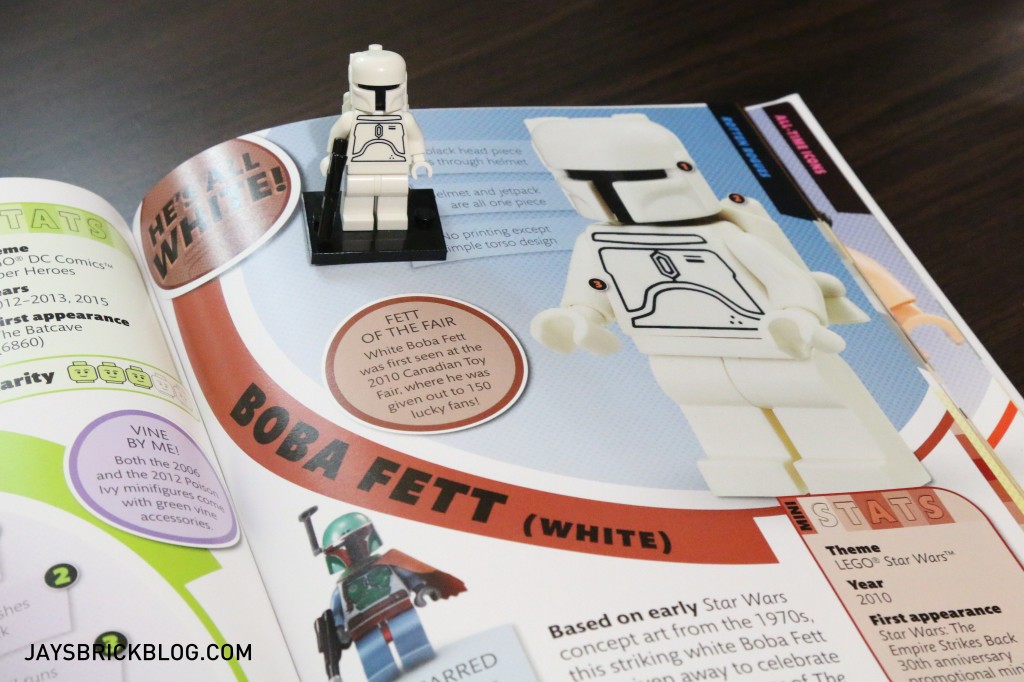 Here’s my White Boba Fett and his corresponding page. He’s no Cloud City Boba Fett… but I still like him. 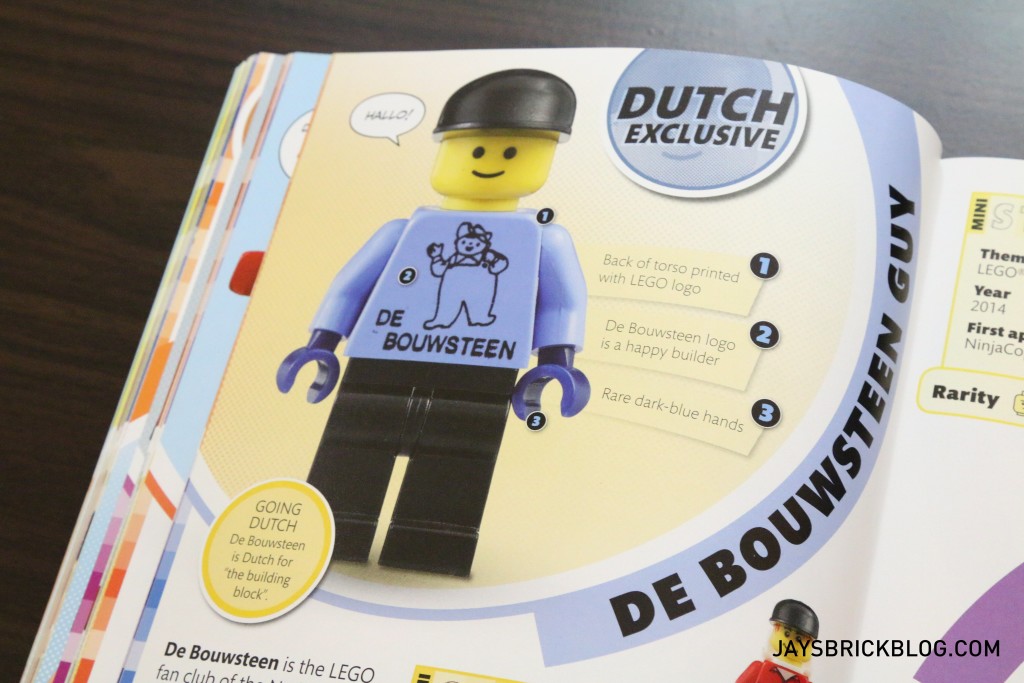 One of the highlights of the book is a really great look at some of the most obscurely rare minifigures such as those specially produced for fan conventions around the world. Above is a Dutch exclusive De Bouwsteen Guy minifigure of which only 1,000 were produced for the Dutch LEGO World fan event in 2005.

Before reading this book, I was blissfully unaware of the existence of these incredibly rare minifigures and now I know I’ll start wondering about how I can get my hands on some of them. Or maybe not since I assume that they’ll be incredibly expensive/borderline impossible to get a hold of. 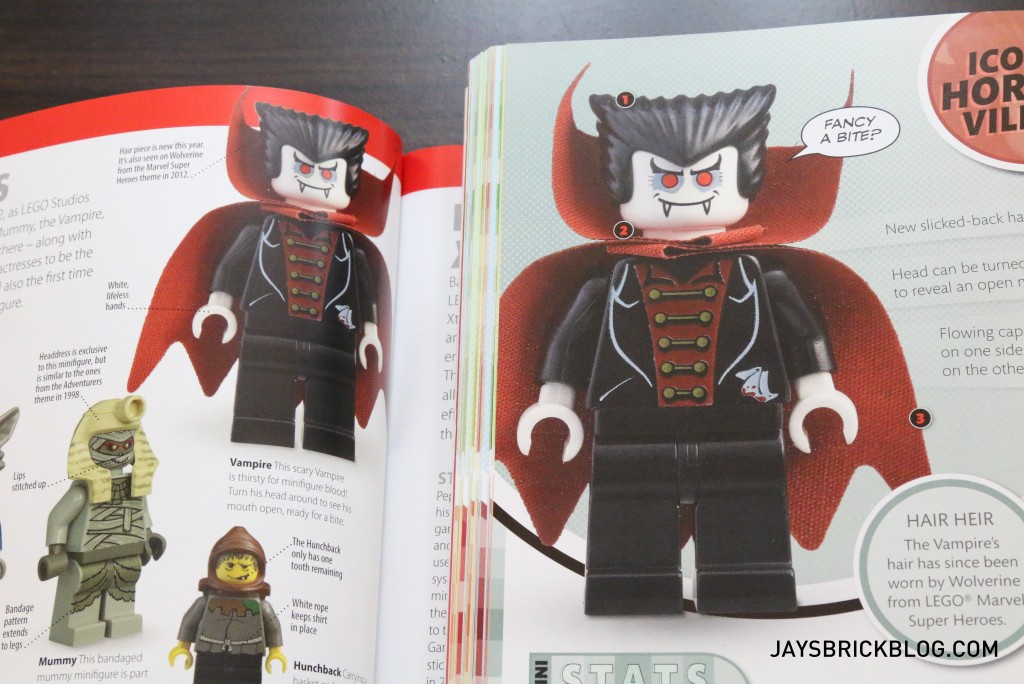 By now you may be wondering… how is this book different from 2013’s excellent LEGO Minifigure Year by Year: A Visual History book which was also published by DK?

It’s not any better at all. I Love That Minifigure pales in comparison with the Year by Year book, so if you already have the older book, I highly doubt that you’re going to get a lot of value out of this book.

I kinda get reusing photos – if it isn’t broke, don’t fix it – but as the owner of both books, it meant that a lot of the book wasn’t new to me. It doesn’t help that LEGO Minifigure Year by Year is one of my favourite DK LEGO Books of all time, right up there with their recent Great LEGO Sets. 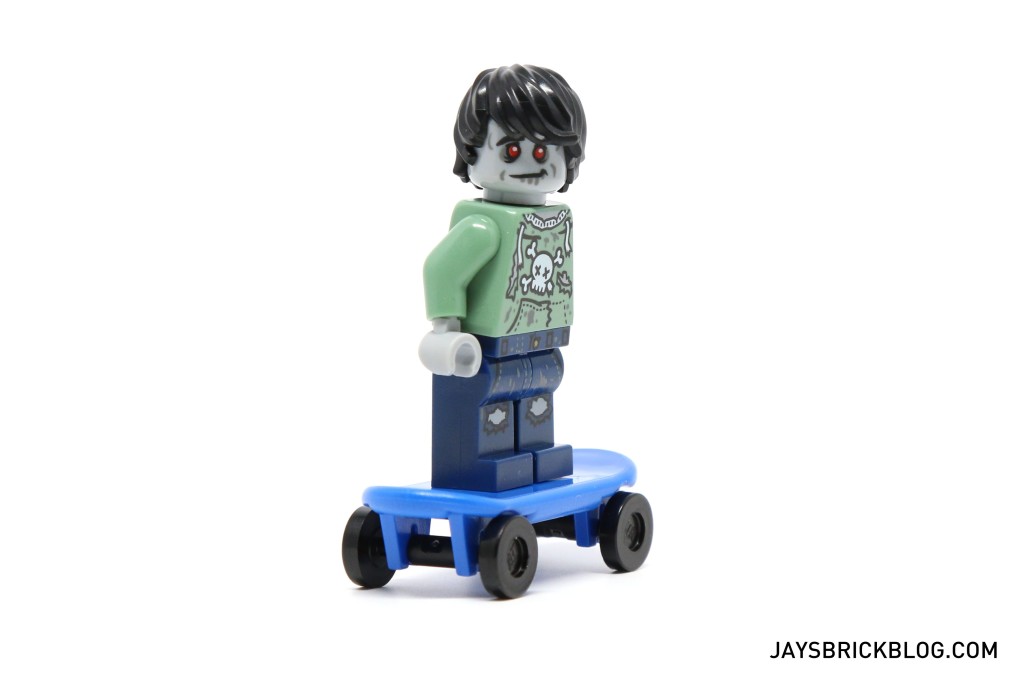 For me, the only thing that sets this book apart from Year by Year is the exclusive Zombie Skateboarder minifigure. Oh yeah, LEGO totally killed Series 1’s Skateboarder and reanimated him as a Zombie. Why? Because Zombies are cool. 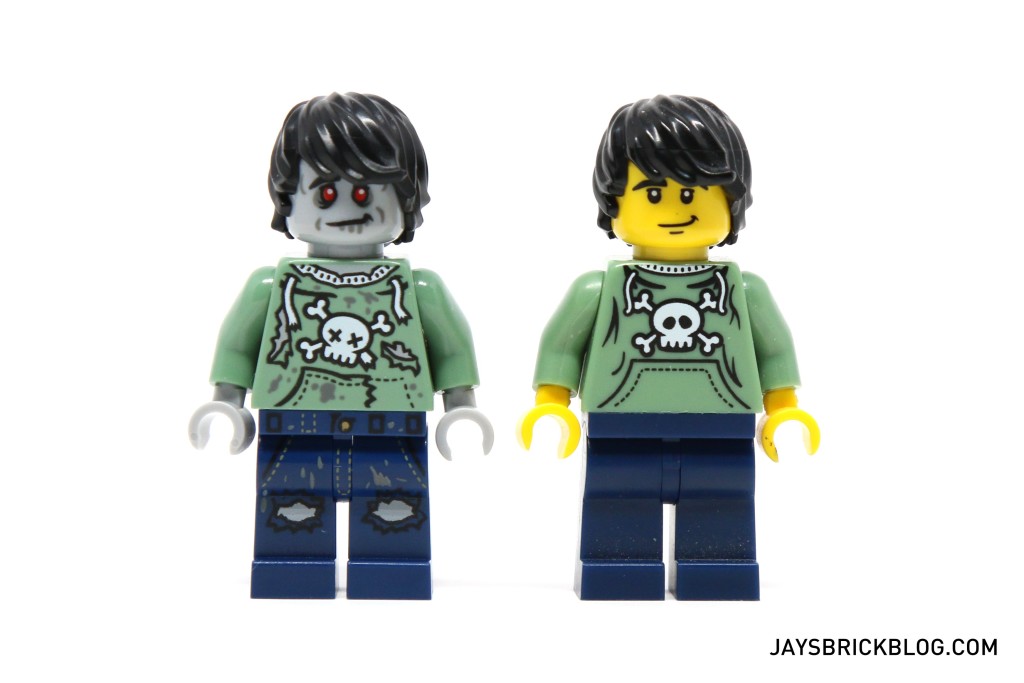 Here’s a side by side look at the Zombie Skateboarder and his Series 1 counterpart. LEGO have done a really awesome job retaining most of the details while adding a gruesome zombified flavour to it. They have the same smirk which I think is nothing short of a brilliant design move.

The Zombie Skateboarder’s torso is almost the same shade of green and I cannot help but love the skull’s X’d eyes. You know, because he’s dead and stuff. Zombie Skateboarder benefits from enhanced leg printing – there’s some extra denim details that wasn’t there on the original which is a cool little touch. 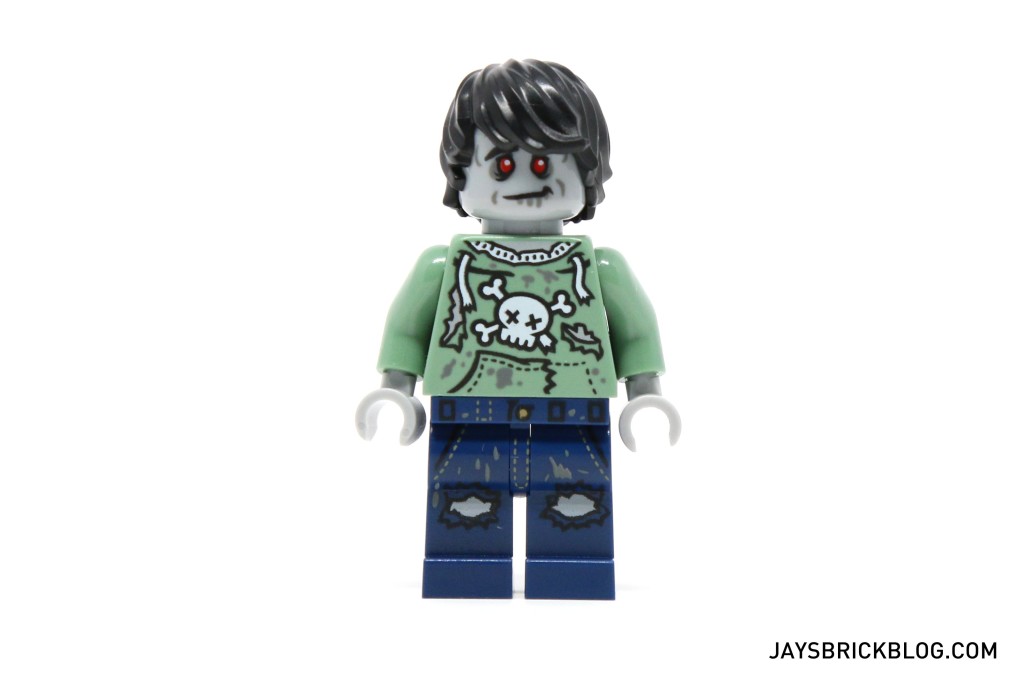 I love it when LEGO remixes minifigures and the Zombie Skateboarder is hands down my favourite thing about the book. 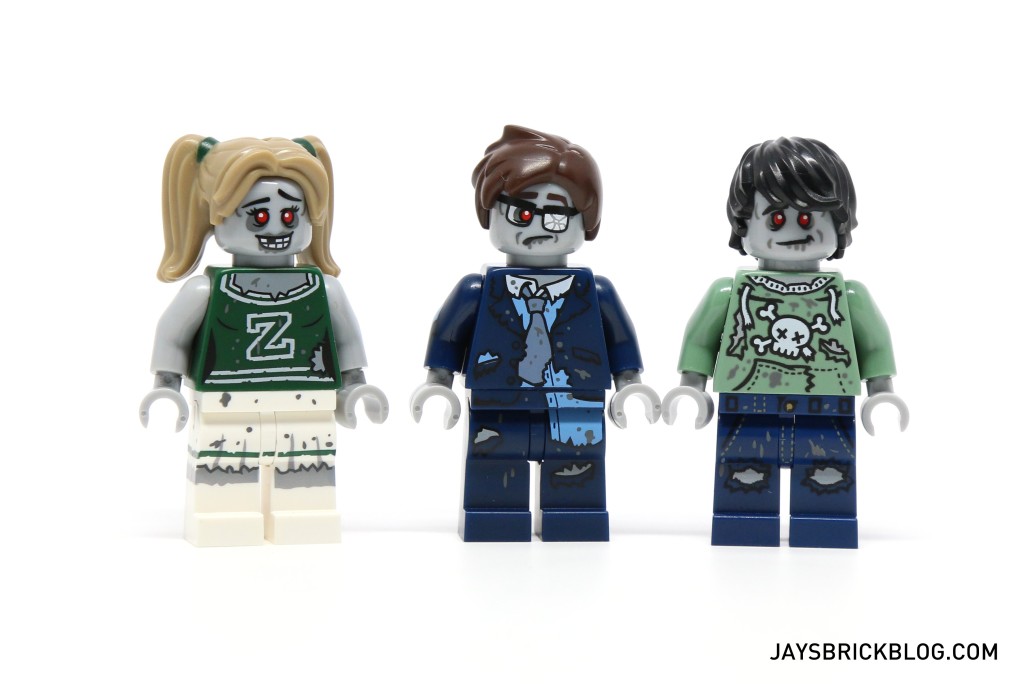 We’re also quite close to being able to assemble a typical Zombie family. All we need now is a Zombified mum.

Final Thoughts: This book was a tricky one for me. As a seasoned LEGO fan and owner of Year by Year, this book didn’t do it for me at all. The content felt a bit like a downgrade, even though I really liked reading about the exclusive fan-event minifigs, I Love That Minifigure still feels like its lacking a lot.

At $29.99 (RRP), this book is also a little on the pricey side, especially if you’re just after the exclusive Zombie Skateboarder minifigure. Yes, most retailers will offer the book at a slightly discounted prices but it’s still a little steep if you already own Year by Year.

The Zombie Skateboarder is easily my favourite thing about the book and even at full price, I would consider buying it just for him alone. But that’s just me and I’m a known irrational rabid compulsive completionist.

It’s a little unfortunate but I can’t quite recommend the book. Obviously, this depends on your situation as I mentioned above. The problem is that you can still easily buy the LEGO Minifigure Year by Year: A Visual History from selected bookstores. Even though it’s $20 more expensive, it’s a much more comprehensive book.

That said, with Christmas coming up and if you’re shopping for a young LEGO fan, I Love That Minifigure checks all the right boxes and will be an ideal gift come Christmas.

Special thanks to DK Australia for providing me with a review copy of I Love That Minifigure.