It’s going to be December tomorrow, which officially marks the start of the festive season! Hurray! One of the things I look forward to the most each year is assembling the year’s Winter Village LEGO set.

Last year, LEGO re-released the Winter Toy Shop which received mixed reactions from LEGO fans. For 2016’s Winter Village set, we get a festive train set, the 10254 Winter Holiday Train which is a spiritual successor to 2006’s Holiday Train.

I’m privileged to be able to bring you this review of the Winter Holiday Train to hopefully give you an idea of whether this set will be a worthy addition to your LEGO Winter Village. 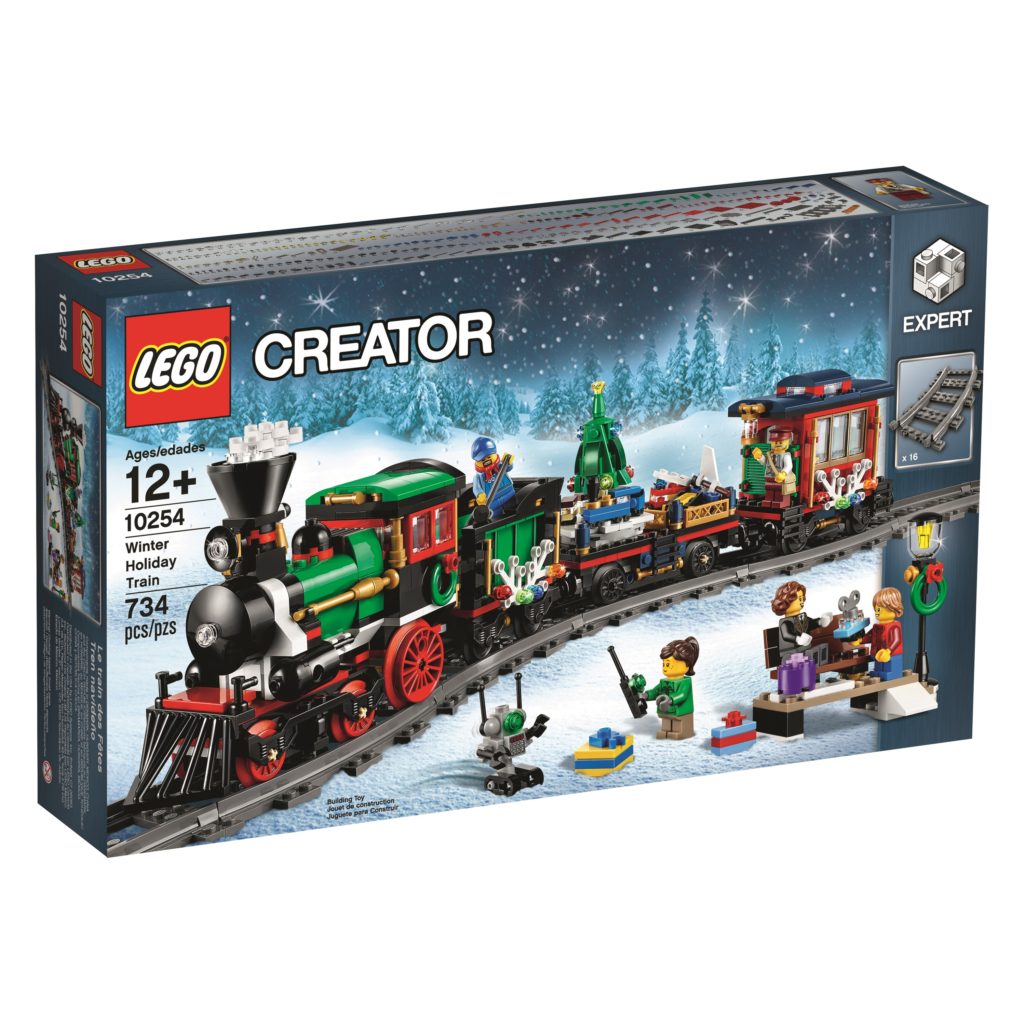 I should start by saying that I’m not a LEGO train person and that this is actually my first LEGO train that I’ve ever built. Shocking eh? I do own several trains (Hogwarts Express & the Lone Ranger one) but I’ve never gotten around to putting them together.

Space has always been a major constraint for me which is one of the reasons why I haven’t really taken a fancy to LEGO trains. That said, I am a big fan of the Winter Village theme because who doesn’t love festive Christmas LEGO sets? I am the proud owner of every Winter Village set and the original Toy Shop was one of my first major purchases upon my return to LEGO.

I was naturally very excited by the Winter Holiday Train, given that I missed out on the original Holiday Train and was very eager to add it to my collection. 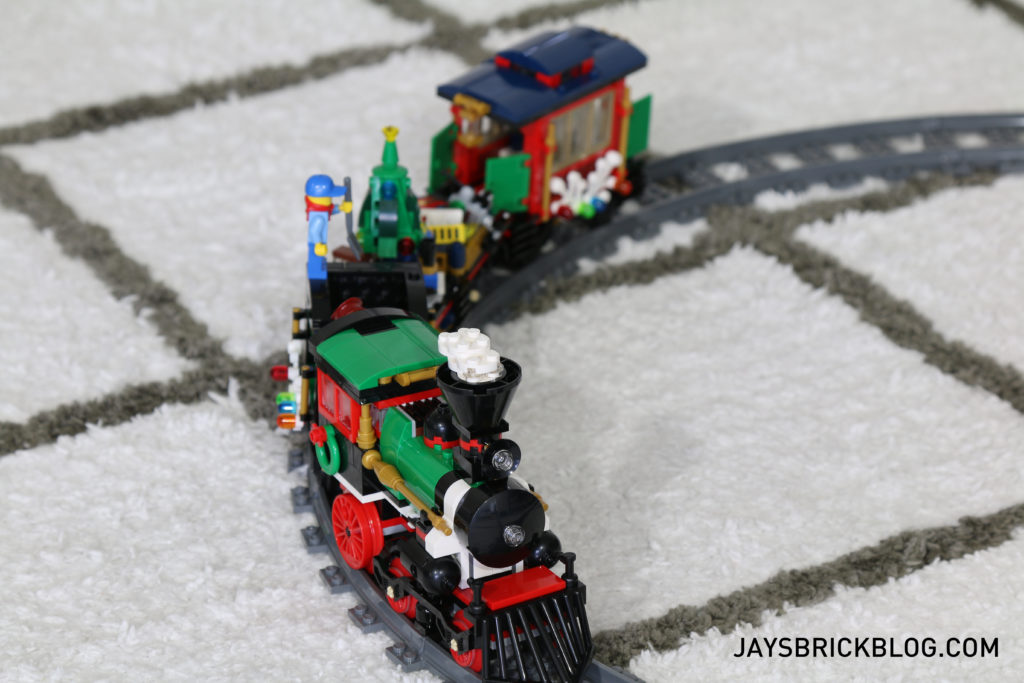 Despite being relatively new to LEGO, the build was relatively simple and it ended a little bit too early for my liking. Coming in at 734 pieces, it’s not the biggest set among the Creator Expert line. There are only 6 numbered bags of parts, split into three main build sections.

It wasn’t particularly challenging and is in fact quite accessible, making it the perfect build for families with younger kids. Older and more experienced builders will be left wanting in terms of the build experience.

The minifigs are one of the weaker parts of the set. We get a train conductor, a train driver/engineer, two children and a lady. The train driver is pretty average, dressed up in blue overalls and comes with a red scarf to jazz up his look. The conductor is a slightly older gentleman, with a very impressive mutton chop beard and a cute little satchel for tickets.

I’m going to assume that the other 3 minifigures are related since they all have freckles. The boy and mum (?) have relatively uncommon hairpieces, but apart from that, their attire and faces are rather common.

Here’s a look at the back printing of the minifigures. It was really interesting to note that the boy has a jacket from the Deep Sea theme last year. 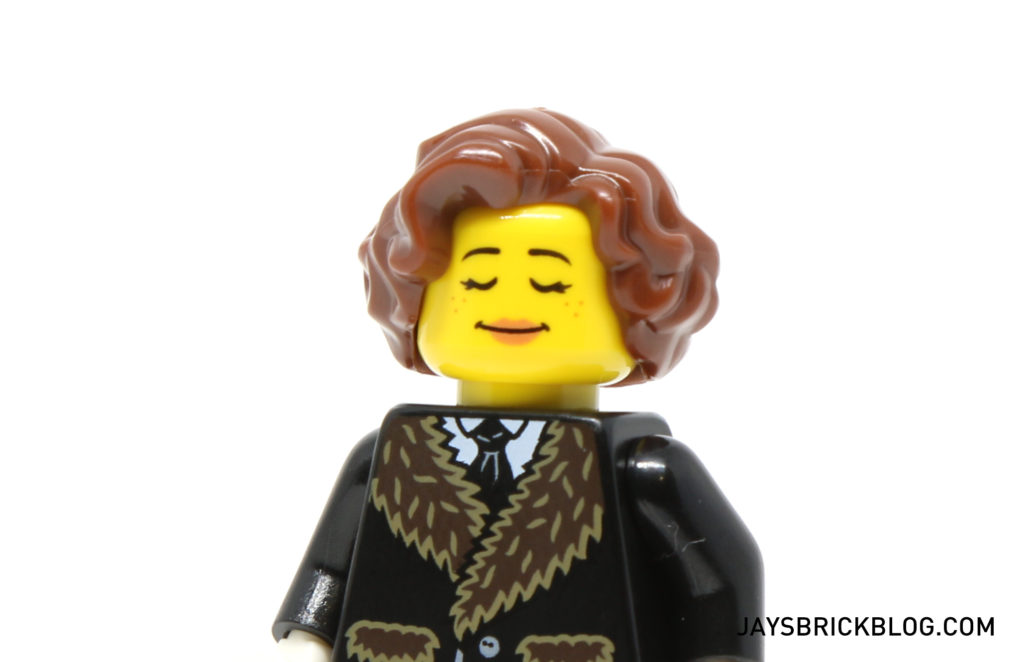 The most interesting minifigure out of the 5 is the mum, purely because of her alternate “sleeping” face.

It’s quite disappointing that there are no exclusive minifigures or body parts in this set, a negative that is further amplified by the fact that there are so few characters to choose from. 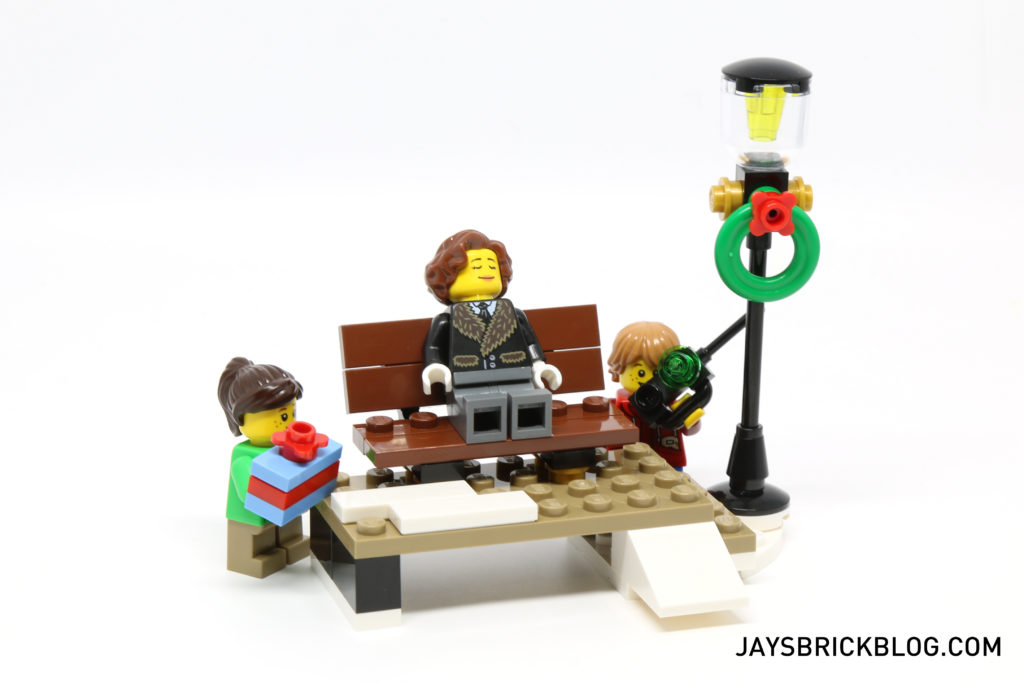 The first thing you assemble is this simple bench and lampost. I guess it’s supposed to be some sort of platform for the train. There’s nothing really interesting about it, and it feels pretty lazy and doesn’t come across as being very well thought out.

My main gripe is that I wish that it was larger and more substantial. It would’ve been naive to expect a full blown station, but I feel like a larger platform, complete with say, some signage or train timetables would’ve made this so much better.

You may notice the white slope awkwardly hanging – fret not, it’s meant to be attached to the train tracks. 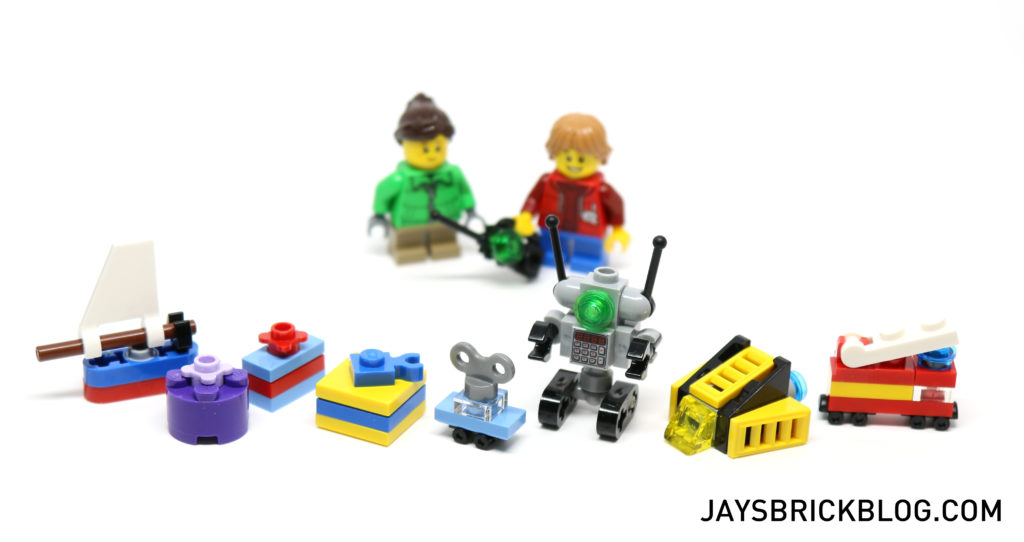 Next up, you assemble a bunch of charming little toys and presents. These are some of the best toys built so far. I especially like the Robot and Sailboat, but the best toy has to be the Blacktron I-inspired spaceship.

My guess is that it’s a Blacktron Renegade. It’ll go really well with the micro Galaxy Explorer in Santa’s Workshop. 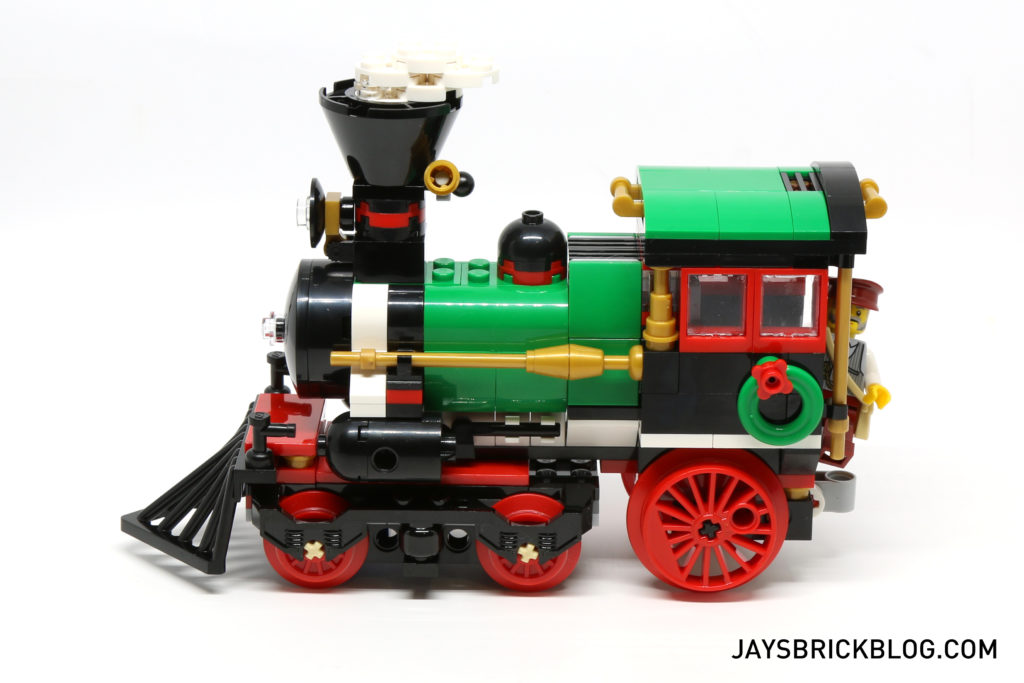 The Winter Holiday Train build commences next. We start with the locomotive engine which is an incredibly attractive model. I love the liberal use of greens, reds and pearl gold elements, all wrapped up in a very retro look.

It perfectly melds the toy-like appearance of the train, with the vintage locomotives that model trains are usually based off. 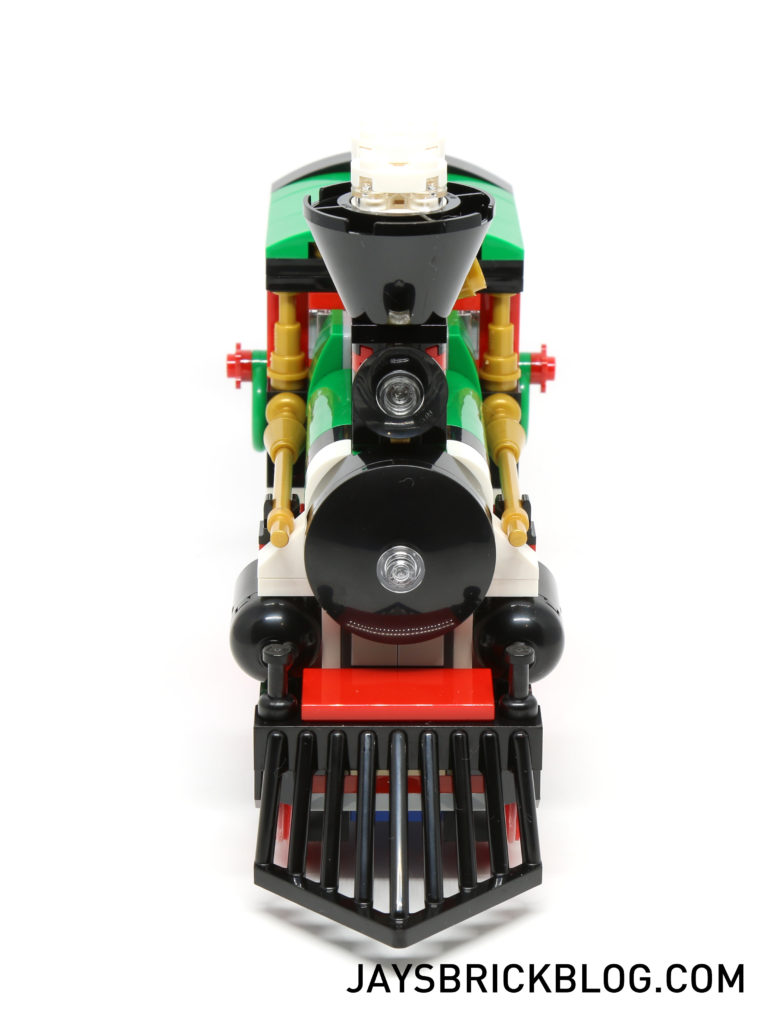 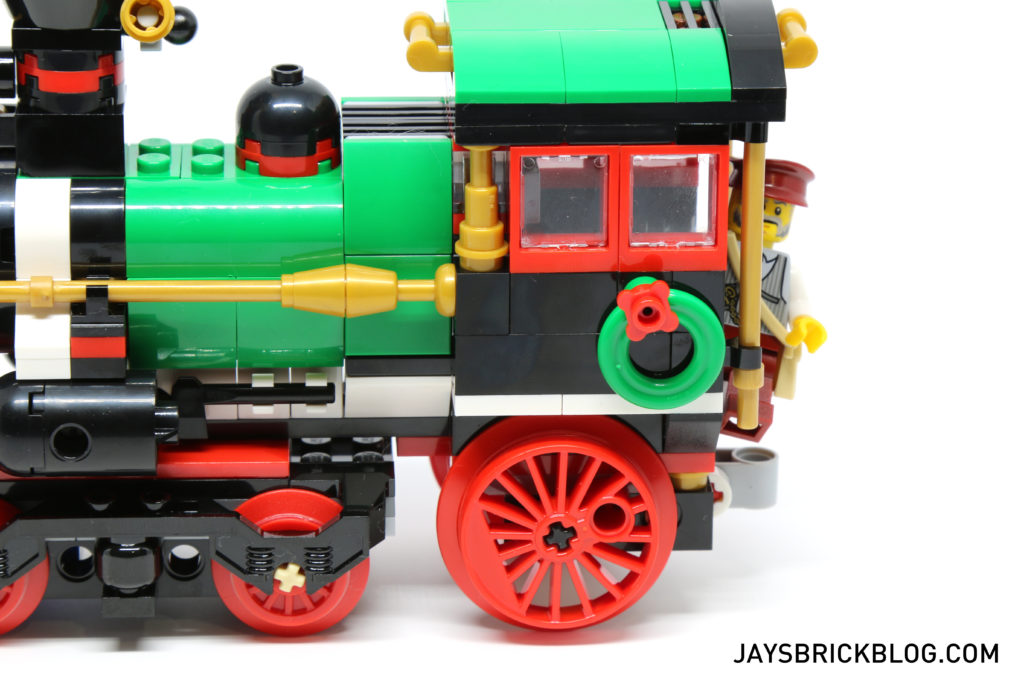 It’s a small touch, but I love the wreaths at the side of the train. The large funnel on the steam engine train is also another visual delight and I really love that the designers incorporated some smoke billowing out of it. 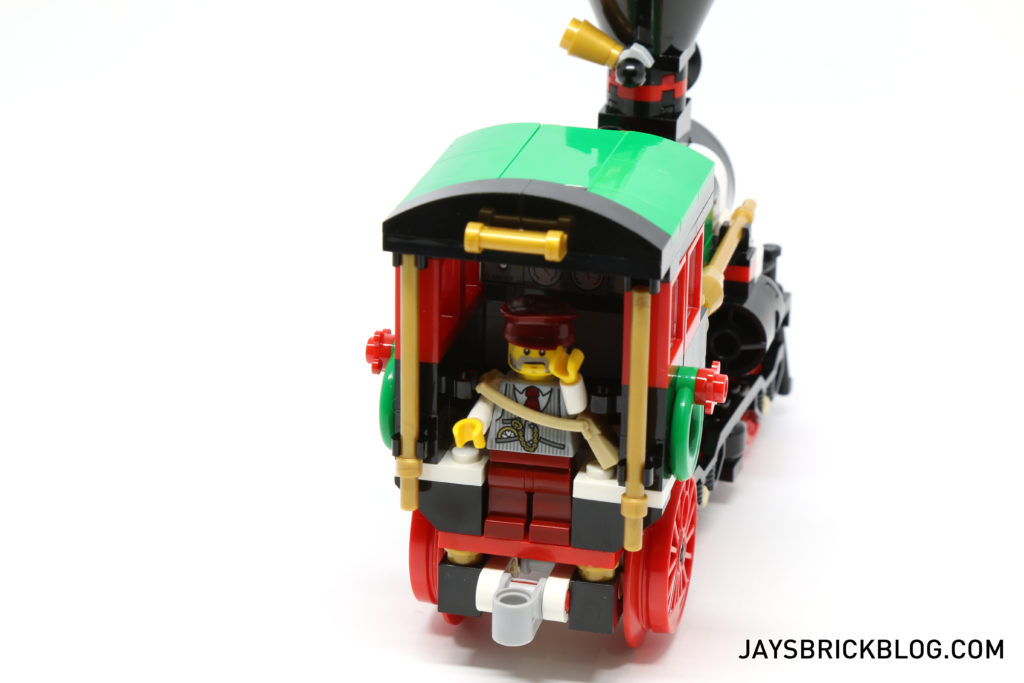 The interiors are really tiny – there’s barely enough space for a minifigure on the inside, but for the most part, it suits the train’s diminutive scale in a sense. 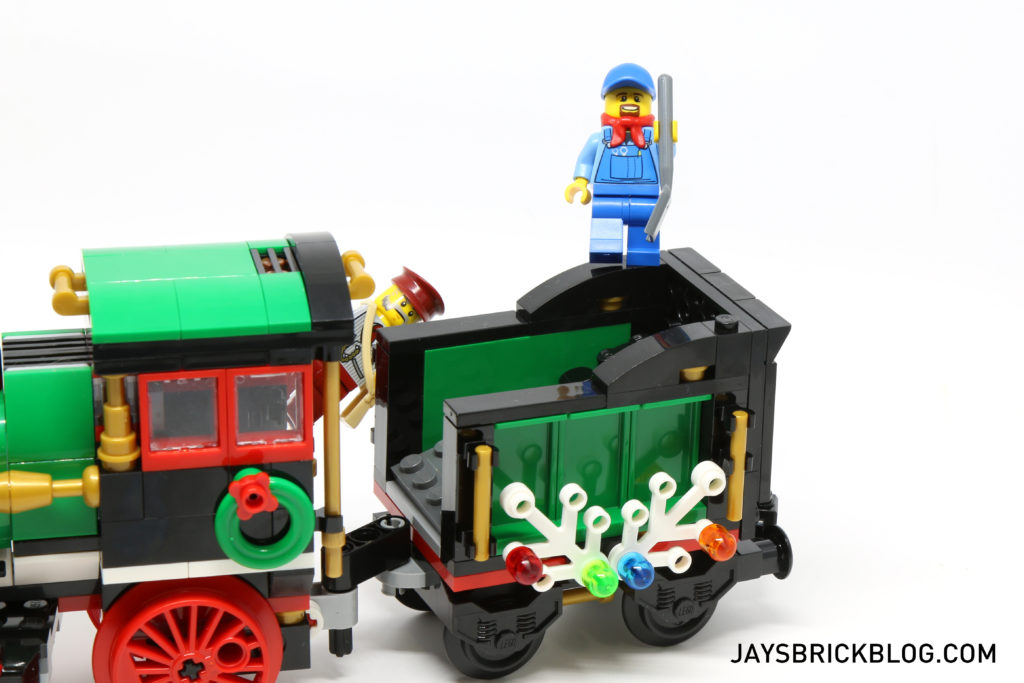 Attached to the locomotive is the coal car, which is a small but very effective build. It bears almost the same colour scheme as the engine, minus the dramatic red elements. 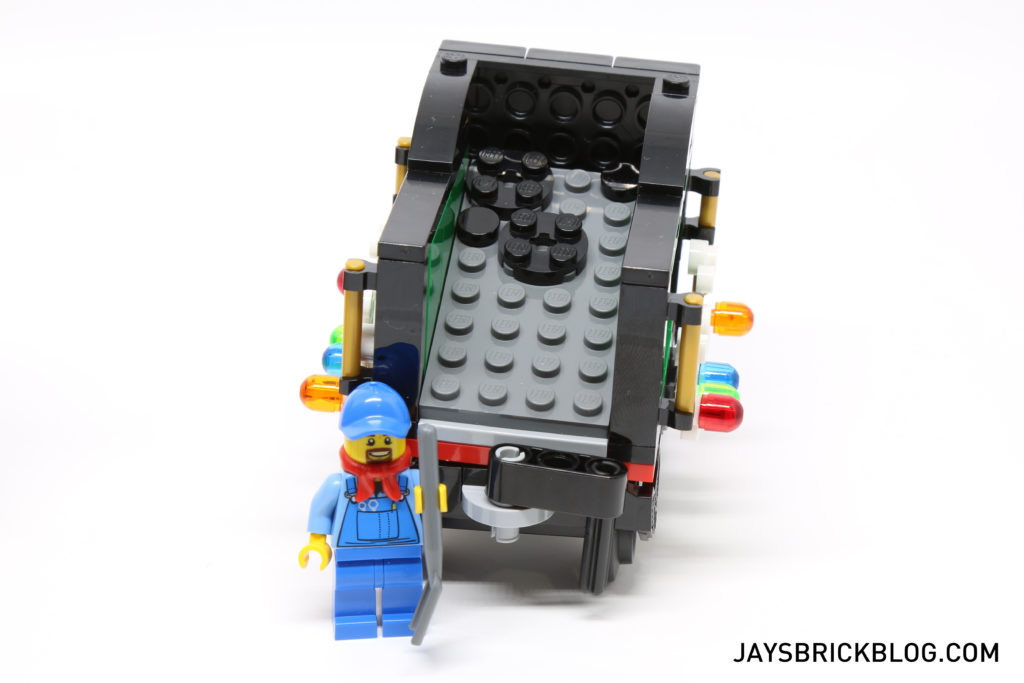 The coal car has a slight slope and some black rounded elements for the coal used to feed the steam engine. 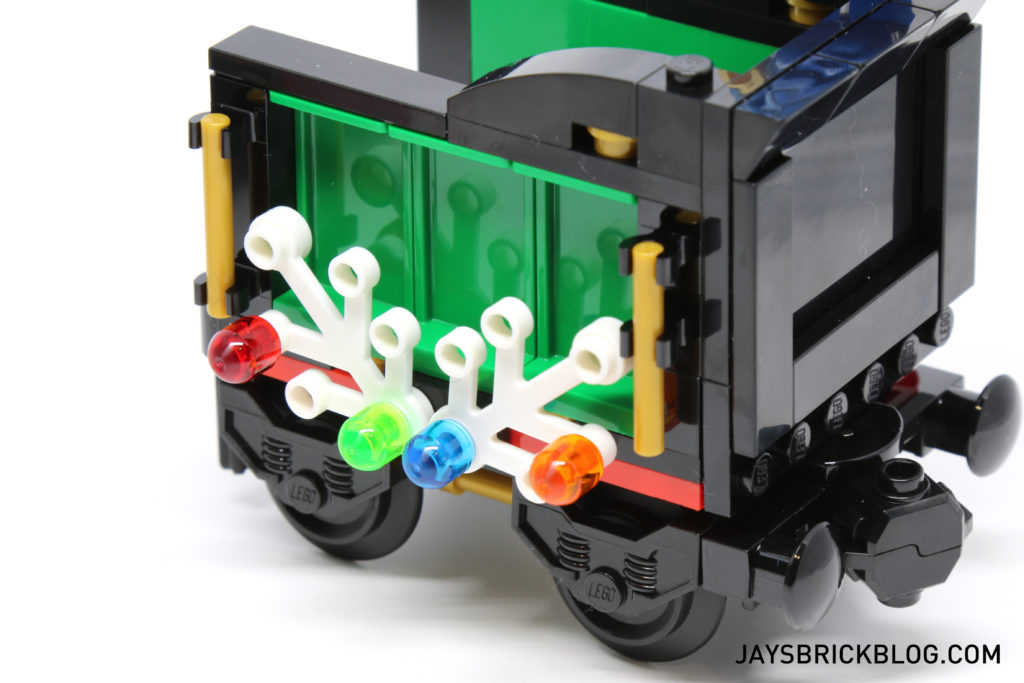 Since this is obviously a festive train, the use of white leaves on the side of the coal car work brilliantly. I’m not a fan of the LED-looking bulbs on the leaves, as they look rather tacky. Using plain studs or even flowers would’ve been slightly better. 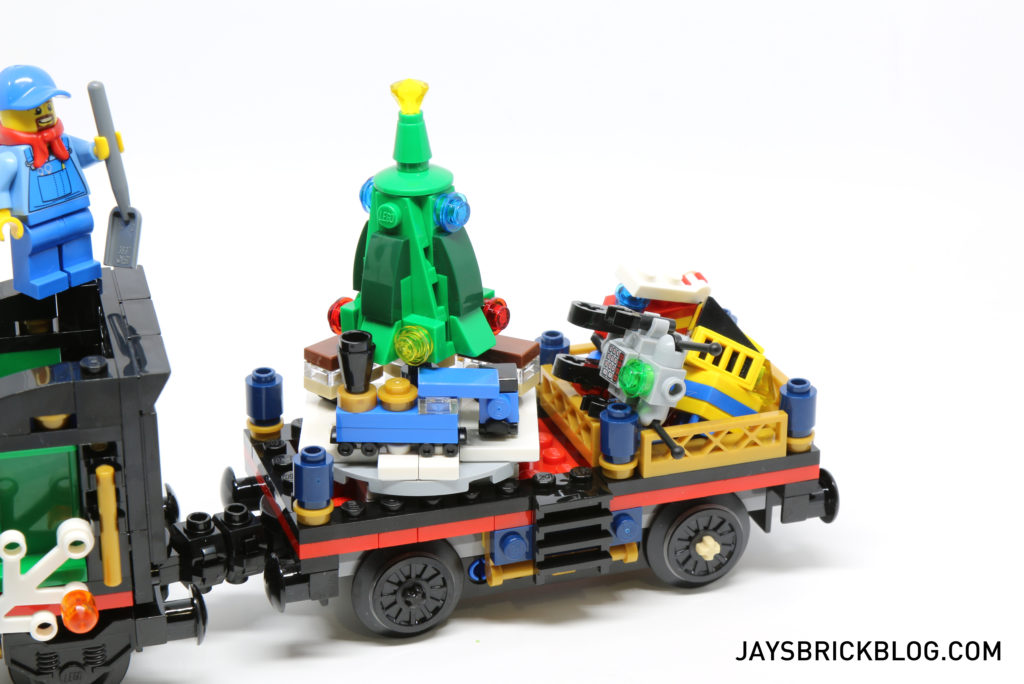 Following the coal car is the best part of the entire train, the cargo car. In addition to a compartment for presents, the cargo car also has a delightful Christmas tree. It’s not particularly large but it packs so much charm and festive delight. 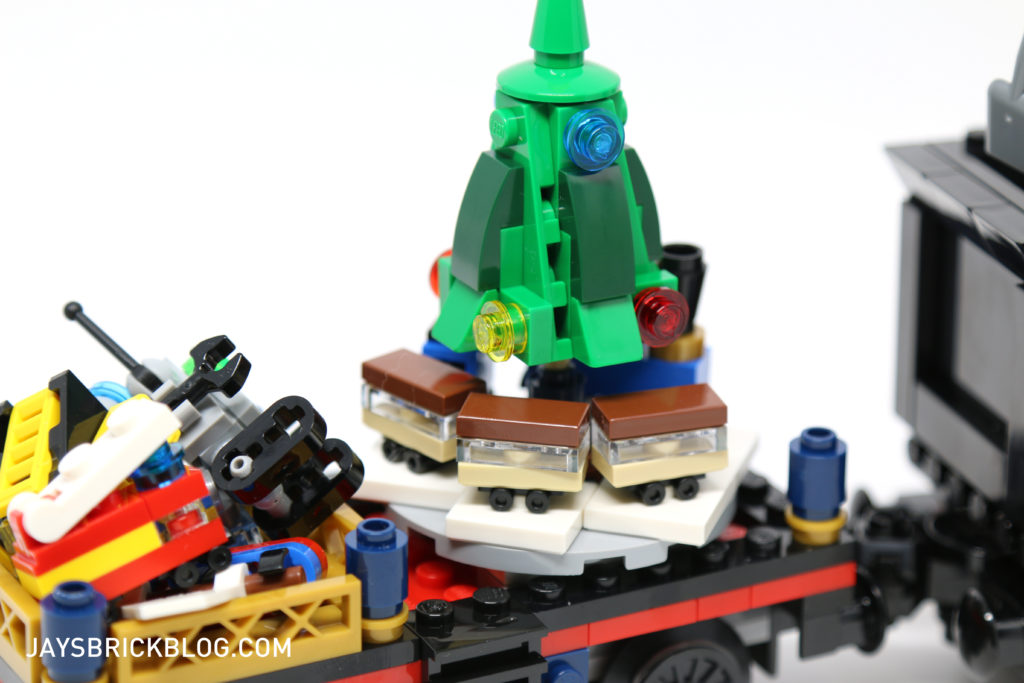 In LEGO meta fashion, the Christmas tree even has a small train underneath it!

But that’s not all. One of the mechanical play features built into the cargo car is that the Christmas Tree actually twirls as you push the train on the tracks, a feat achieved by the wheels turning.

It’s really cool and when you lay the train down on the track and you (or a motor) pushes it along, the rotating Christmas tree is quite a sight to behold. I’m really glad that the designers crammed such a neat feature into such a small build. 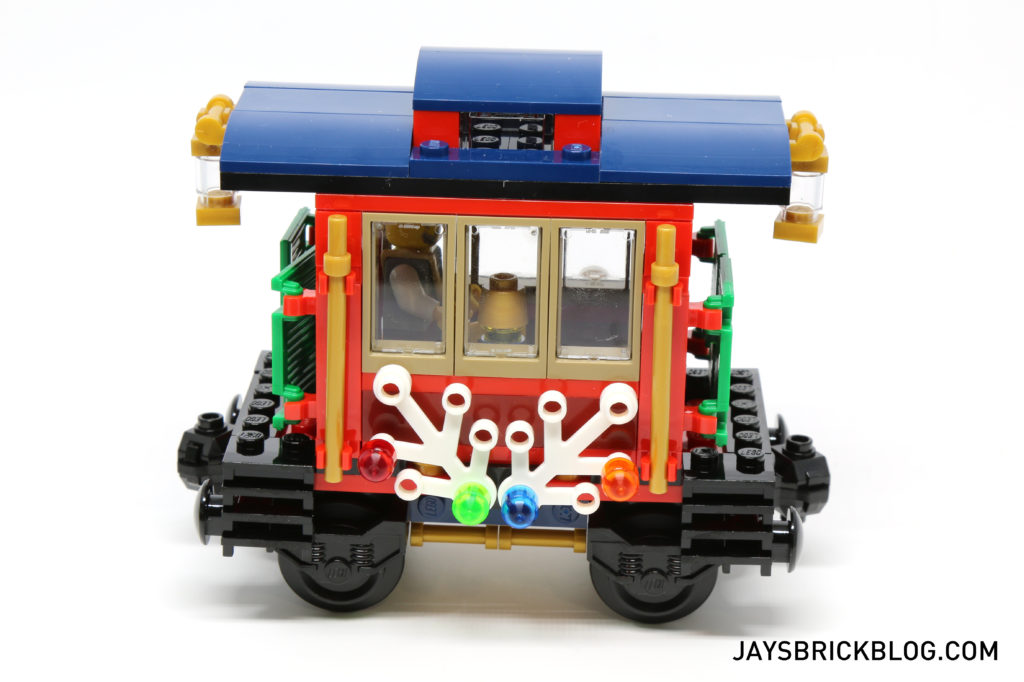 Last but not least is the caboose or passenger car which sits right at the end of the train. It’s a bright red train car with a dark blue roof – a really nice way to tie the entire Winter Holiday Train together. 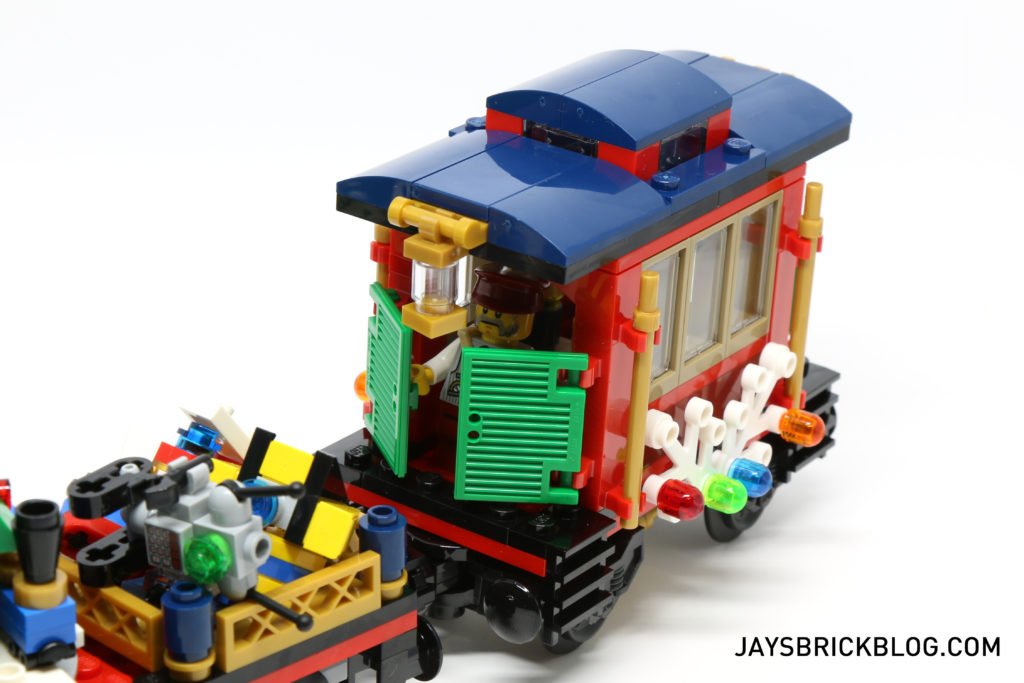 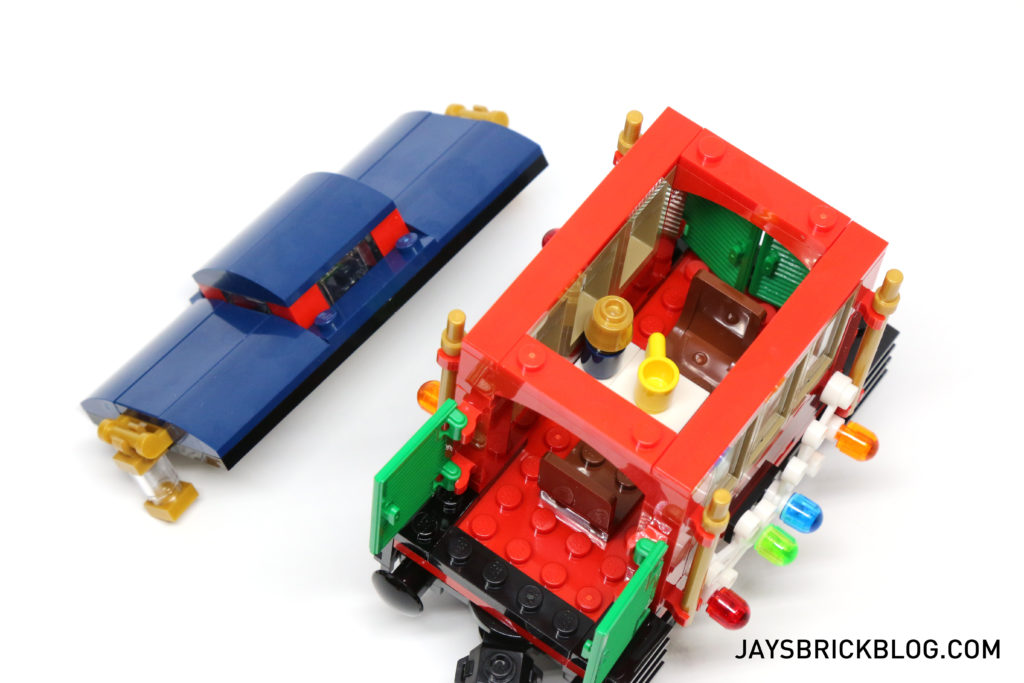 The roof of the caboose comes off to give you access to the interiors. As you can see, space is a rare commodity and you can barely fit more than two minifigures into the tiny passenger car – they have to be sitting down too.

The furnishing is rather bare, with just a lamp and one coffee cup. No idea what the other passenger is supposed to drink. 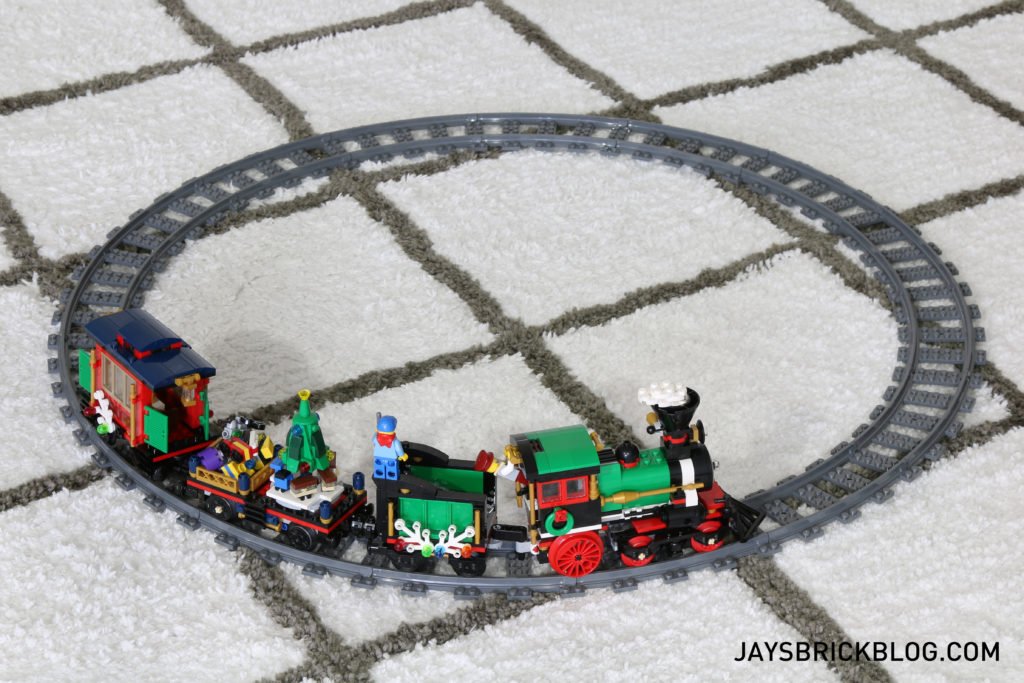 The Winter Holiday Train comes with enough track to make a full circle, and as you can see here, it’s rather large. Unless you have an existing train layout, it’ll be quite a challenge to find space for all the track. 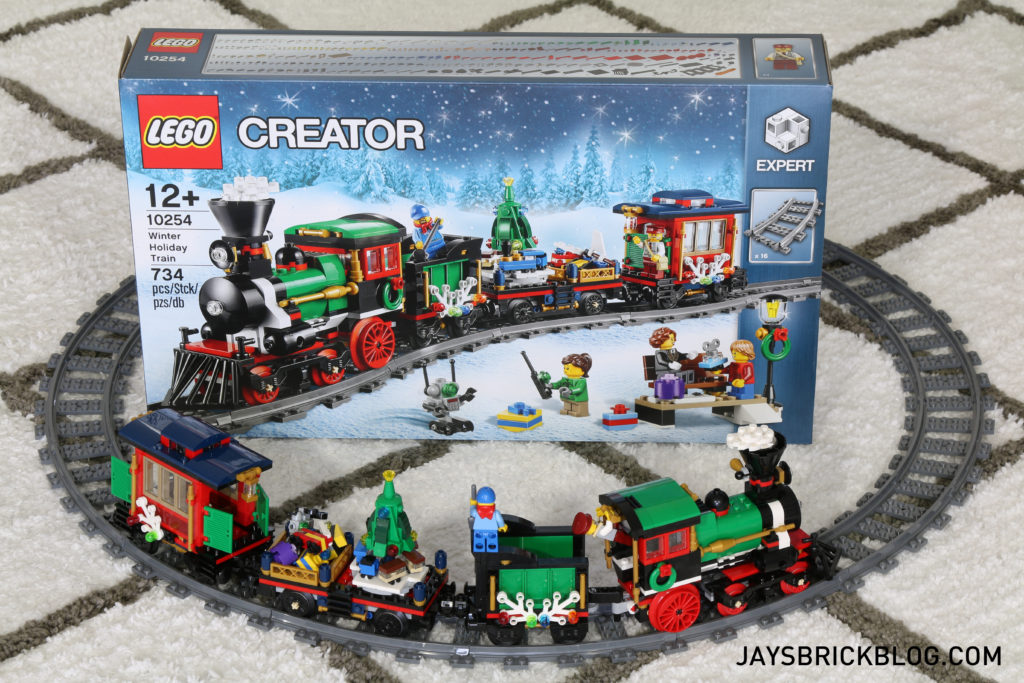 I laid it out on my carpet, just to take photos and had to pack it up as I don’t have a surface area large enough to accommodate the entire ring. 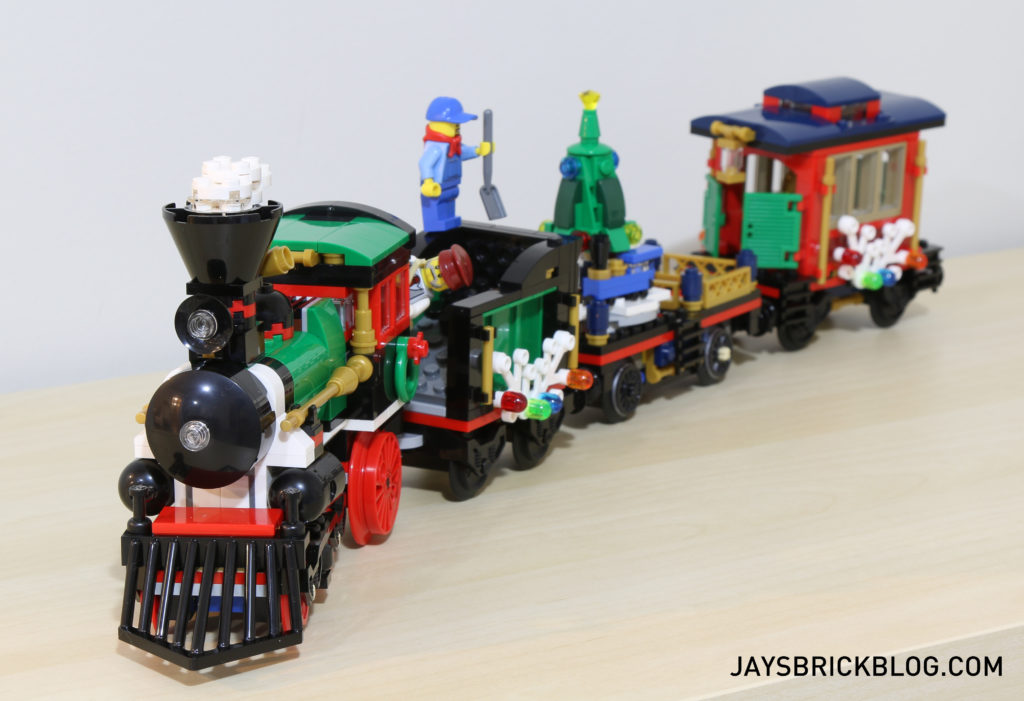 The Winter Christmas Train isn’t without its flaws, yet when it’s assembled together, the entire model comes together quite well to create a charming, fun and colourful Christmas-themed set. 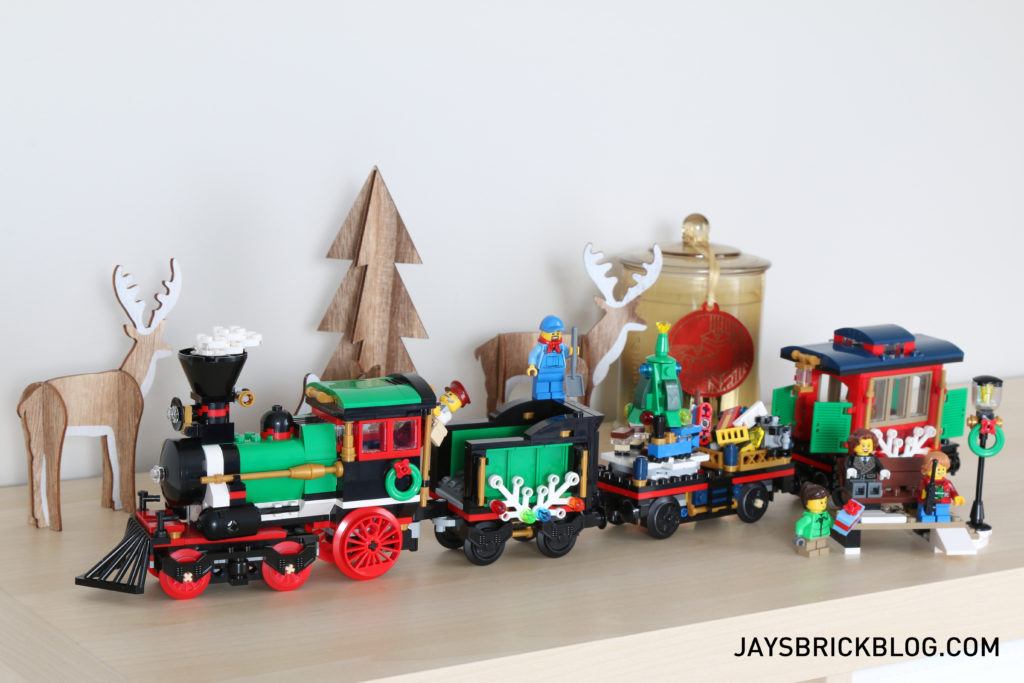 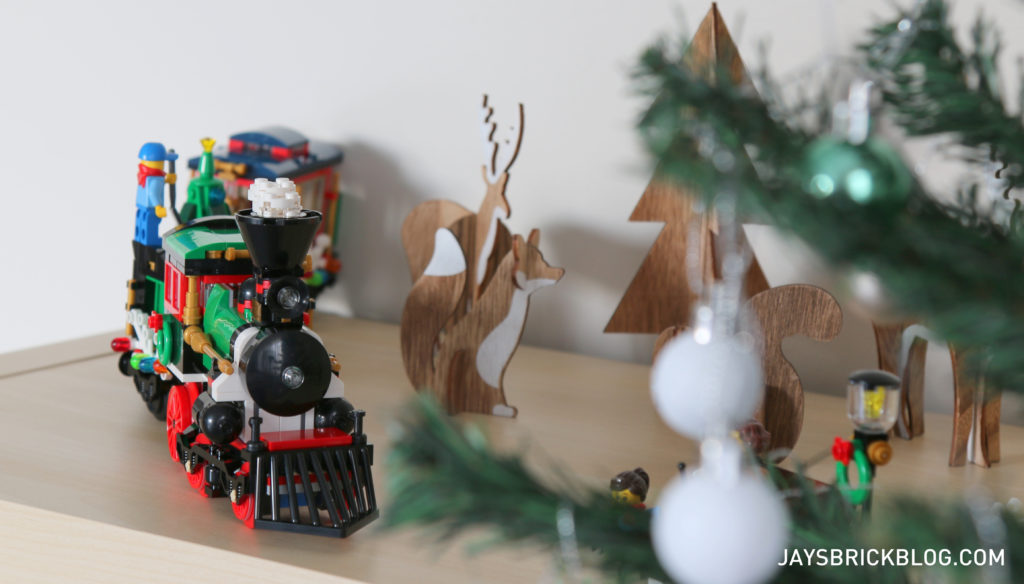 We’re not putting up our large Christmas tree this year (as we’ll be away from homes), but we’re setting up a “Christmas shelf” for our decorations.

The Winter Holiday Train fits in very well with most of our other Xmas decor, and its bright, toy-like appearance enables it to emulate the kind of toy trains that people are accustomed to see under Christmas trees.

Final thoughts: The Winter Holiday Train is a very worthy addition to LEGO’s beloved Winter Village theme, but for some reason, it doesn’t quite live up to the lofty standards that its predecessors have set.

Don’t get me wrong, this is a very attractive set and is well worth a purchase, especially if you want a LEGO set that’s a little unique or if you’re a long-term collector of Winter Village sets. It just doesn’t capture the magic and the rustic charm of previous entrants in the Winter Village theme.

The Winter Holiday Train has flaws, but they’re mostly covered up when you take a look at it as a whole, lay it on the track and let it loose. When I completed the build, it reminded me of the Toy Story train, 7597 Western Chase because of its toy-ish design.

In that sense, the designers have done a tremendous job, capturing the essence of toy trains and their bright, colourful and innocent appeal. The Winter Holiday Train would make an excellent fixture around your Christmas Tree if you’re planning on getting one, and if you motorise it, the appeal would tremendously increase.

There are a few things that are lacking, such as the minifigure department and the barebones train platform. The train platform is the missing link that’s sorely needed to tie this to other Winter Village sets.

I think that if LEGO added a hundred or more parts to the piece count, all of which went to creating a larger platform, which had more recognizable “Winter Village” elements, my opinion of this set would be far higher.

That said, I do think this is a really great set, and I really like all the little holiday details built into it. I highly recommend picking this set up purely for festive reasons and if you’re a fan of the Winter Village sets.

This set also makes the perfect Christmas gift and younger builders will definitely appreciate piecing it all together and even motorising it to bring it to life.

Is it the best Winter Village set? No, but that doesn’t stop it from being one of the more charming and memorable LEGO sets from 2016.

Thank you so much for reading! Hope you’re all prepared for the holidays! Have you bought and assembled the Winter Holiday Train? Share your views in the comments section below!