What better way to celebrate the 50th anniversary of the Apollo 11 mission, which sent the first human beings to the moon, than to review 10266 NASA Apollo 11 Lunar Lander.

Not only that, if you’re awake and see the notification of this post being published hit your inbox, or on Facebook, I’ve also timed the publish date of the post with the exact moment that the Lunar Lander first landed on the moon – right down to the very minute at 20:17 UTC.

The Eagle has landed is probably the second most-quoted line from Neil Armstrong during the Apollo 11 mission, and marks one of humanity’s greatest achievements – making it to the Lunar Surface.

Thanks to Rambling Brick for the amazing idea!

So without further ado, let’s jump into a review of the LEGO Lunar Lander. 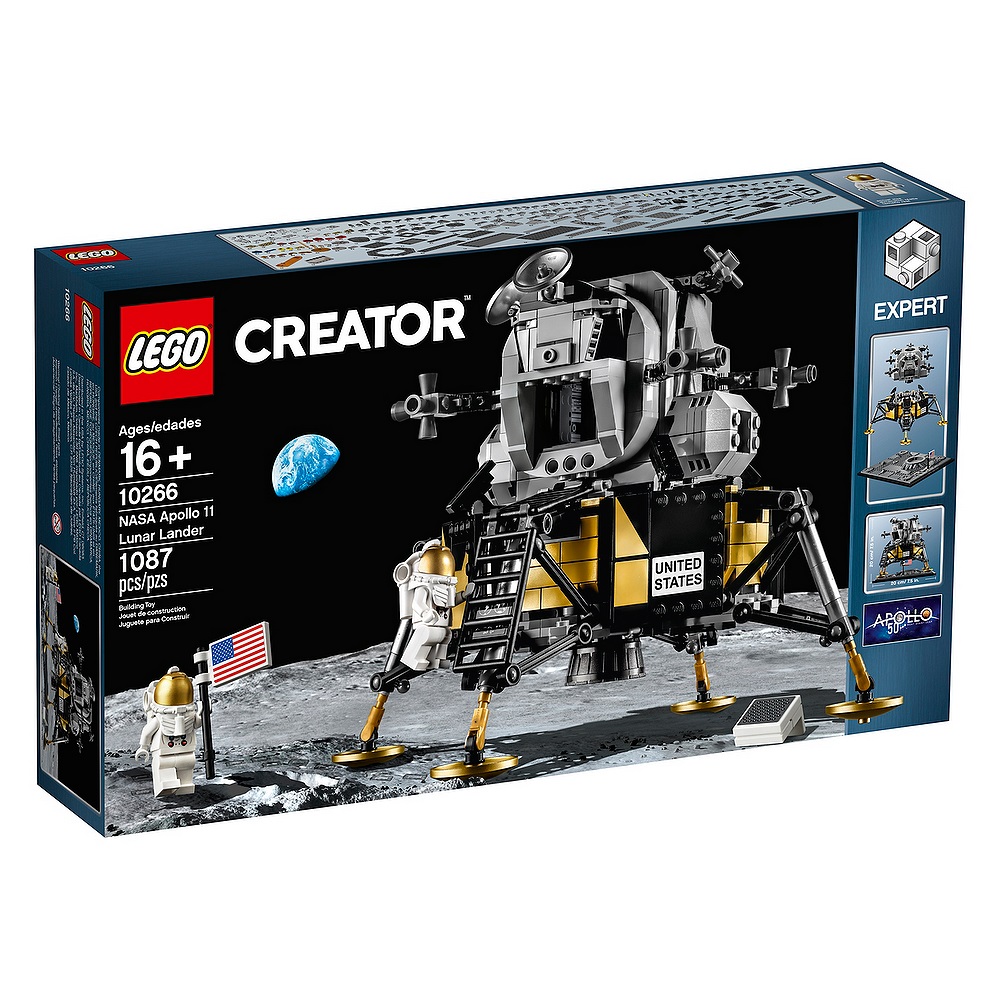 I’ve always been enamoured with space and the moon landings since I was a child. Stories about the heroism of Buzz Aldrin, Neil Armstrong and Michael Collins have always captured my attention and rightfully so as it’s one of humanity’s greatest achievements.

This has been a fantastic week for all thingsApollo 11, which all the articles and videos revisiting and celebrating the Moon Landings which I’ve thoroughly enjoyed watching.

LEGO has always had a special place in the NASA and Space Exploration story, from its Classic Space roots, which define so much of what LEGO is today, to 2017’s sublime NASA Apollo 11 Saturn V set which to this day, remains one of my favourite LEGO sets of all time.

In my unofficial head-rankings of favourite LEGO sets of all time, it occupies the number 2 spot quite confidently, just behind Orthanc. 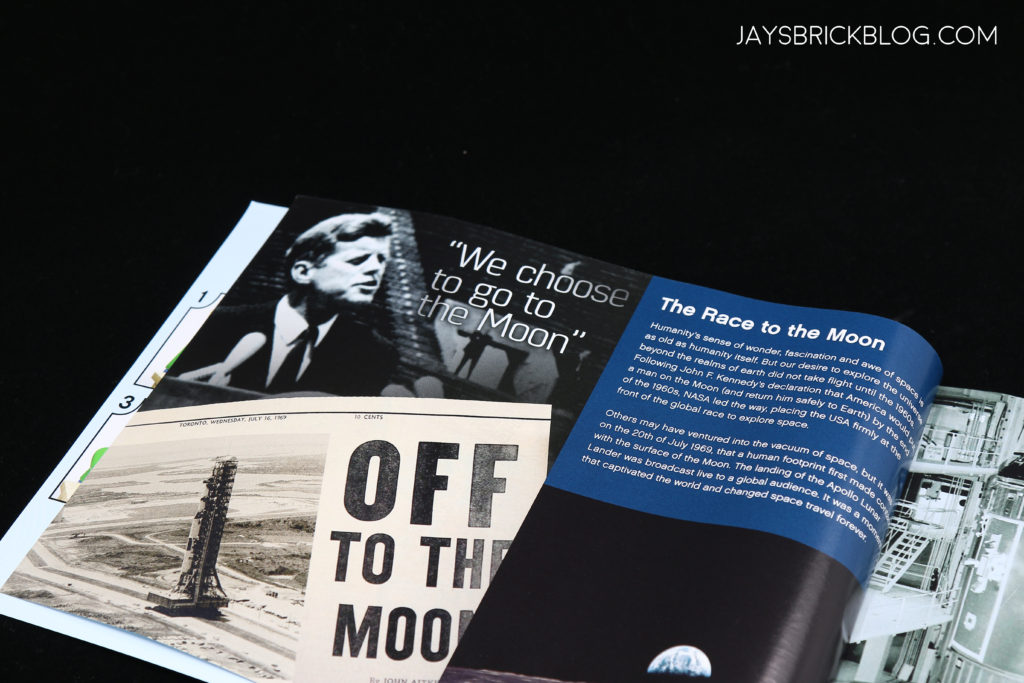 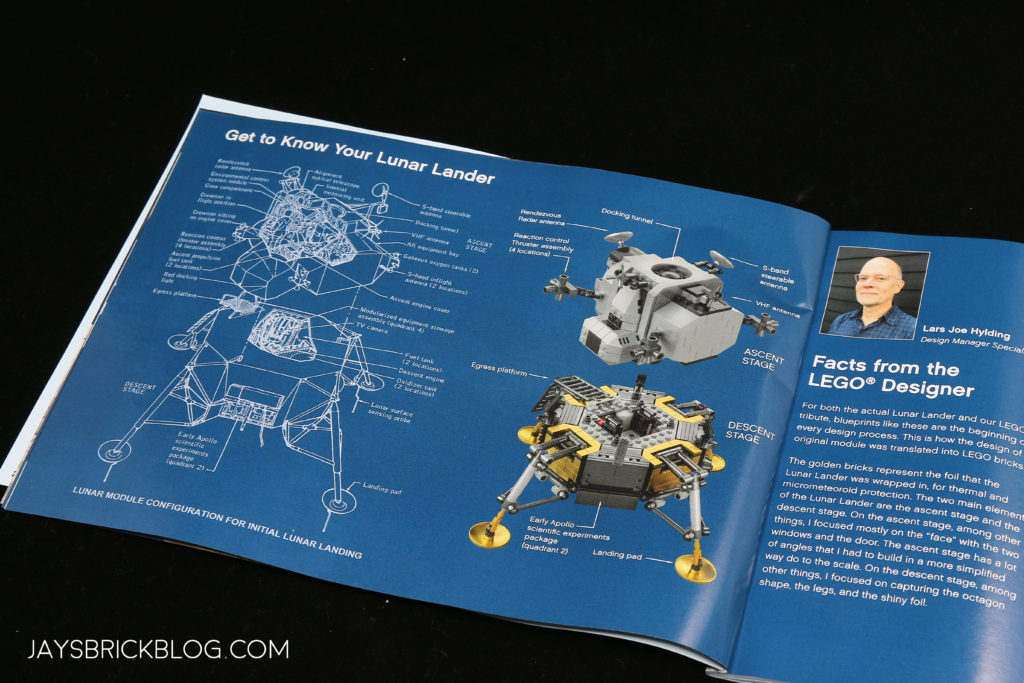 Here’s a look at the first few pages of the instruction manual, which contain a wealth of information about the Apollo 11 missions.

The Space Race was such an exciting story, and you get to relive the journey through these sections in the manual.

It’s highly educational, and I recommend reading it all before you get into the build to set the right tone. 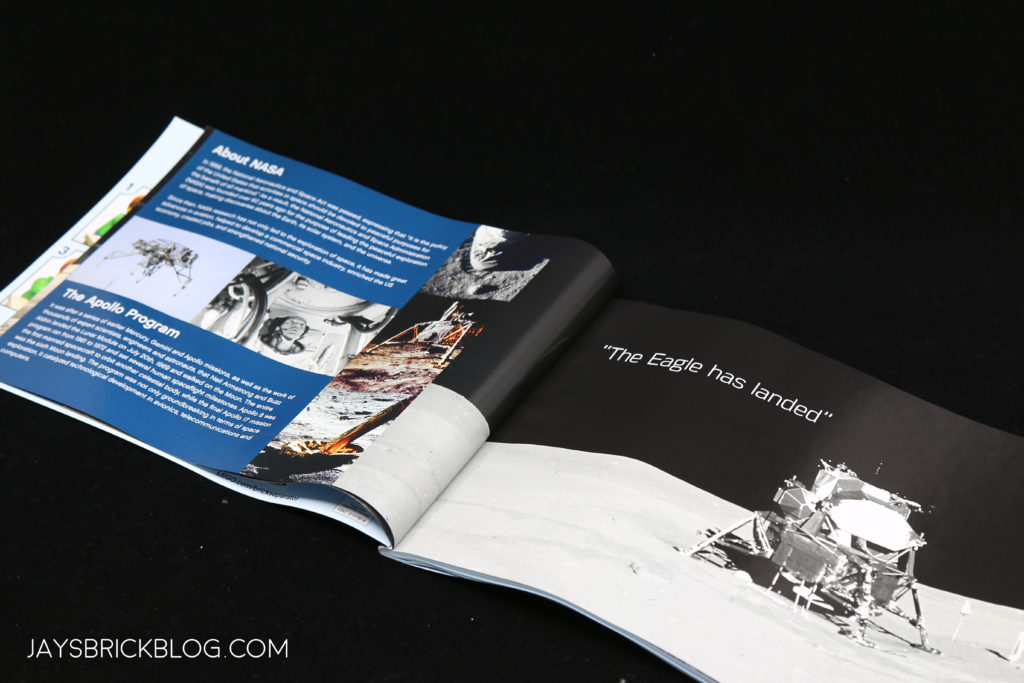 There’s a wealth of historical photos, scientific diagrams of the Lunar Lander and beautiful snapshots of historical moments from the Apollo missions and the struggle to send humanity to the moon. 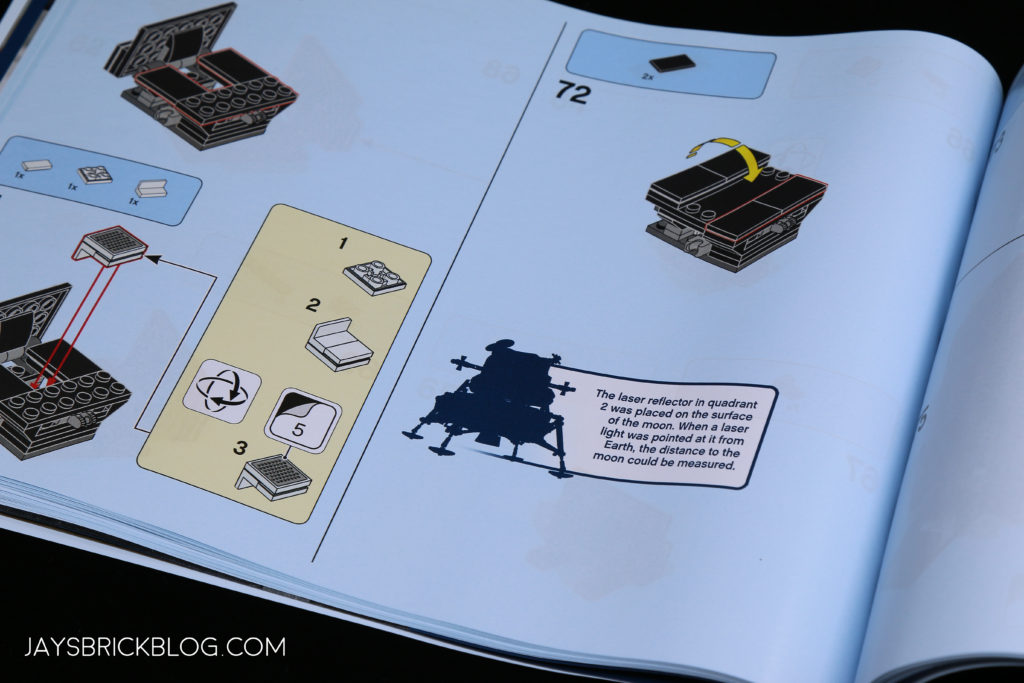 I cannot overstate the educational impact of this set, and it makes the perfect gift for any man, woman or child with a love for space.

Even through the build, you’re given tiny factoids of the Lunar Lander componentry so I found myself learning or re-learning about the Apollo missions as I built the set. 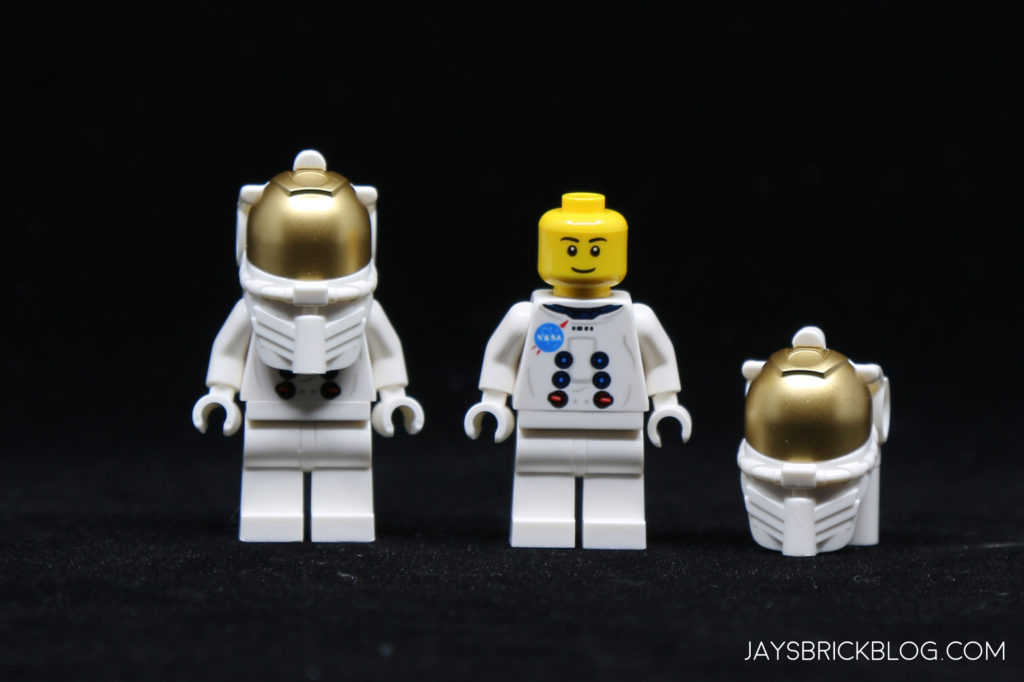 Here’s a look at the 2 Astronaut minifigures included in the set to represent Buzz Aldrin and Neil Armstrong. They have near-identical classic yellow minifigure faces underneath their spacesuits, which have gold visors.

The spacesuits aren’t a 100% replica of the actual spacesuits that Neil and Buzz wore on the moon, but they do a decent enough job.

Underneath their spacesuits is a brand new torso, which has the NASA logo printed on it as well as nozzles that pump oxygen into the suit across the abdomen. 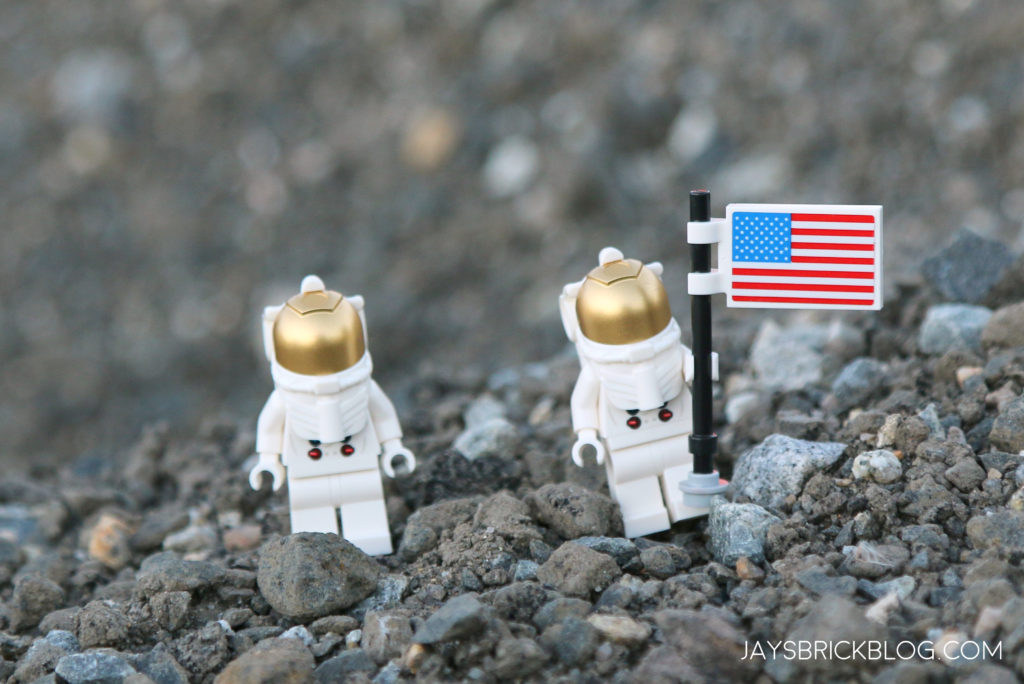 The design is remarkably similar to the actual suits, save for the lack of the Apollo 11 patch on the left breast, as well as any arm or leg printing.

That said, the minifigs are great and absolutely do the job for me.

Unfortunately, like in most of pop culture, the 3rd man of the Apollo 11 mission, Michael Collins isn’t represented in the set, as he wasn’t on the Lunar Surface as he was orbiting the moon in the Command Module.

I feel like it would’ve been nice for LEGO to include Michael Collins who is often forgotten and excluded in the set, just to remember his contributions to the mission. 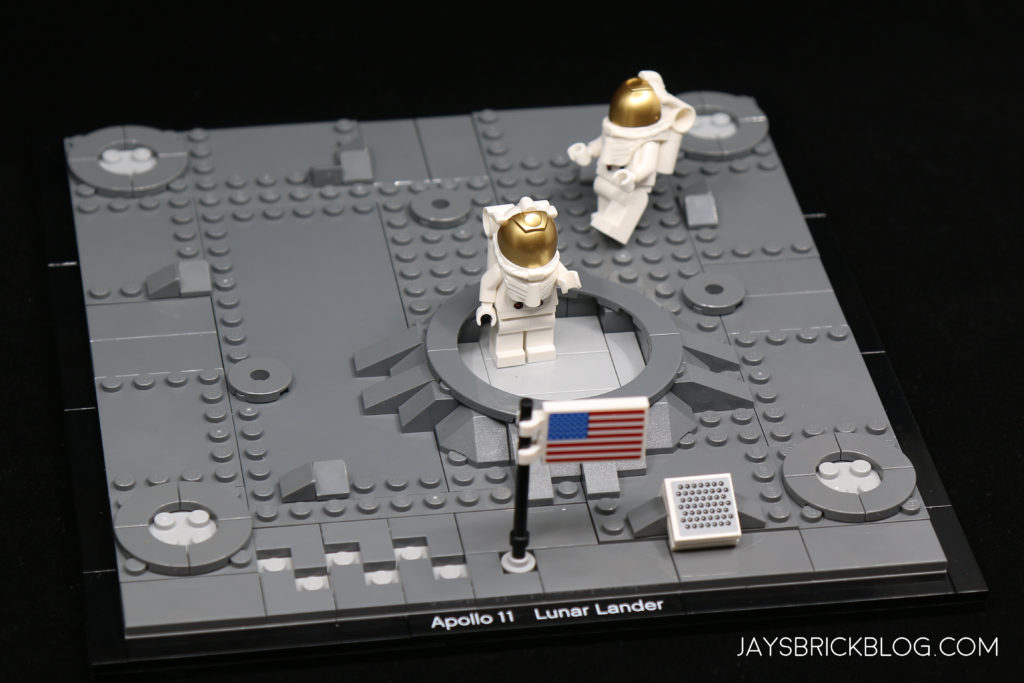 The build starts with the creation of the base of the set, which in many ways borrows from LEGO Architecture sets with its black frame.

You build a small section of the surface of the moon, complete with craters, rocks, the United States flag and even minifig footsteps.

I love that they included a printed tile for the Apollo 11 Lunar Lander name. In each corner, there are craters for the Landing Gear to nestle into.

Here’s the completed build, which was a joy to build. The build incorporated very fun building techniques, that swirl around the geometric shape of the Lunar Lander.

I also enjoyed that throughout the build, you’re building in all directions and that the final model incorporates a very healthy number of drum-lacquered gold elements to mimic the actual Lunar Lander’s appearance. 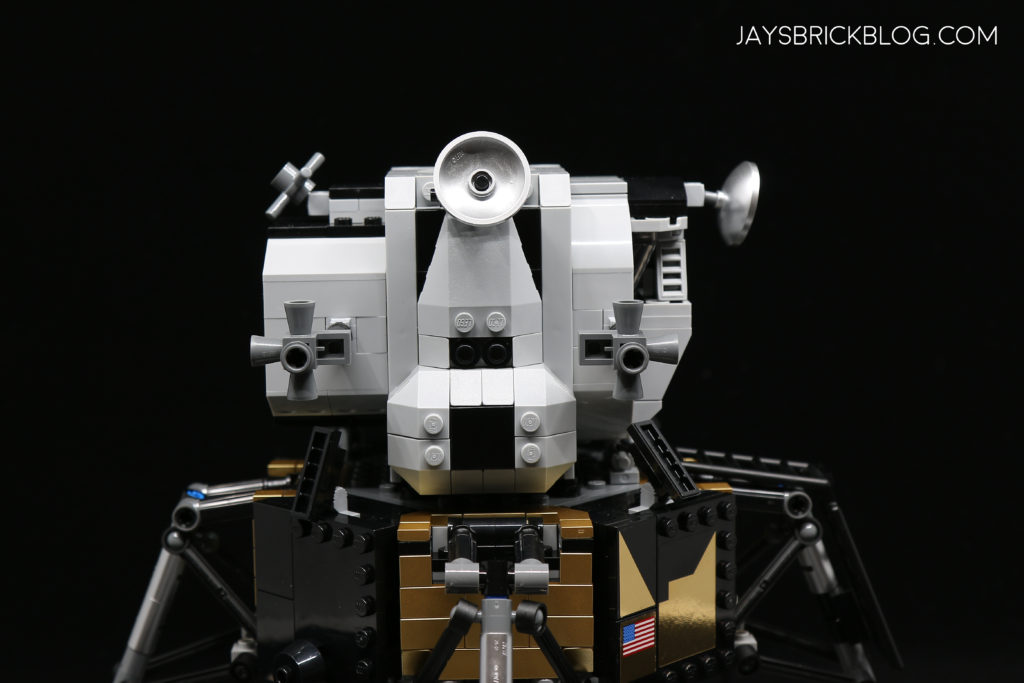 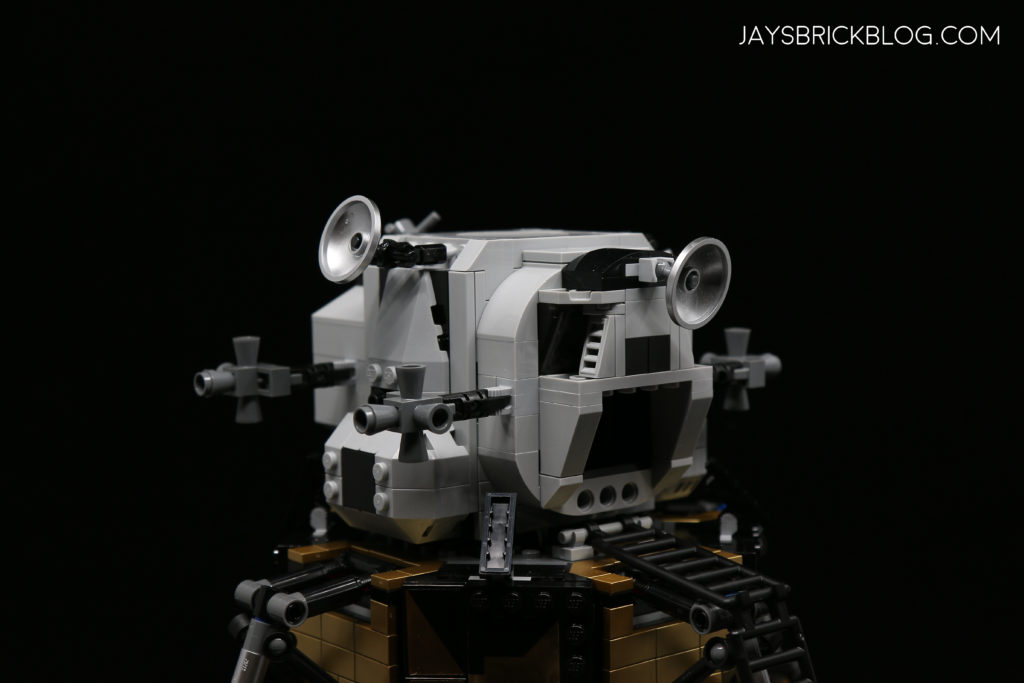 Here’s a look at the Ascent Stage, which easily uncouples from the Descent Stage. The shape is remarkably accurate to the actual Lunar Lander, and I love the array of thrusters (the t-shaped things sticking out the side) and radar dish antenna.

I love that the designers managed to capture the odd shape of the Ascent Stage, with all its slopes. 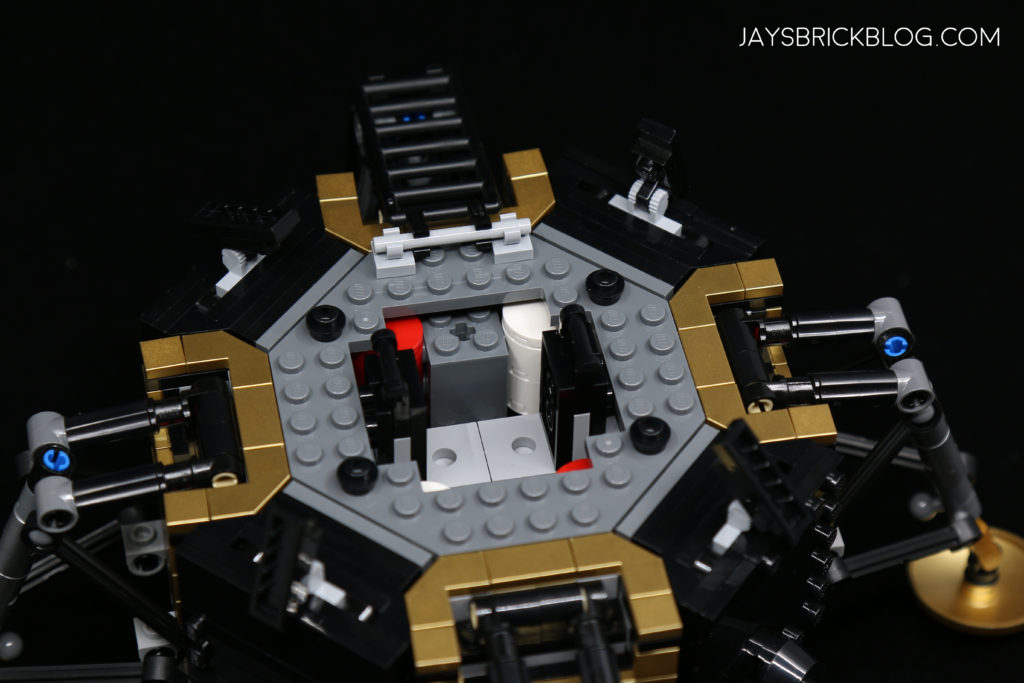 I also really liked that the design of this closely follows how the Saturn V rocket stages attach to one another. 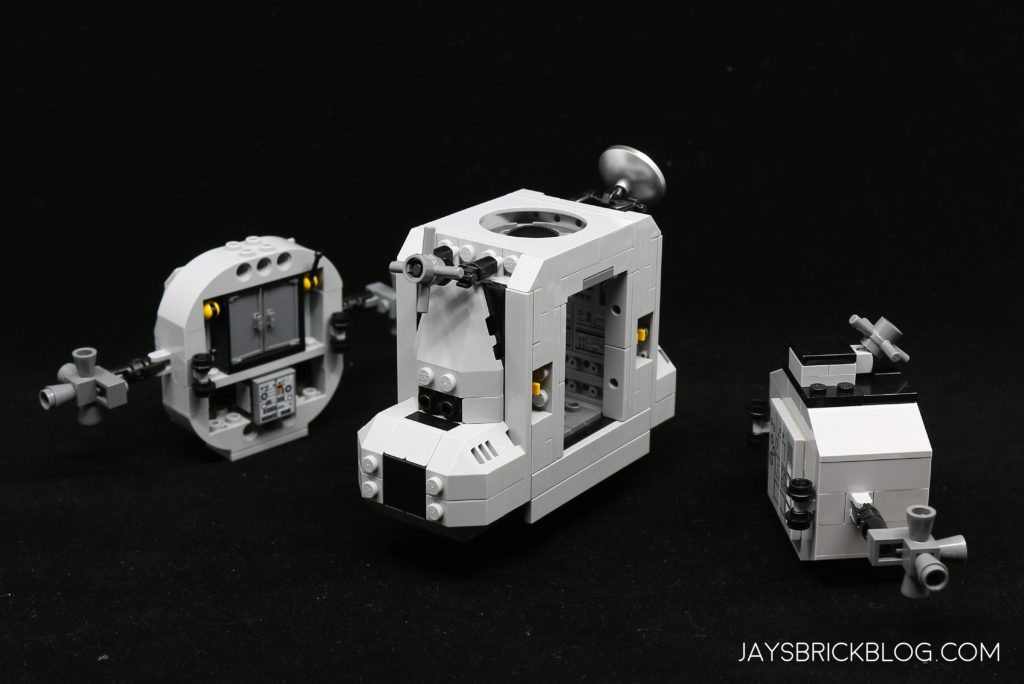 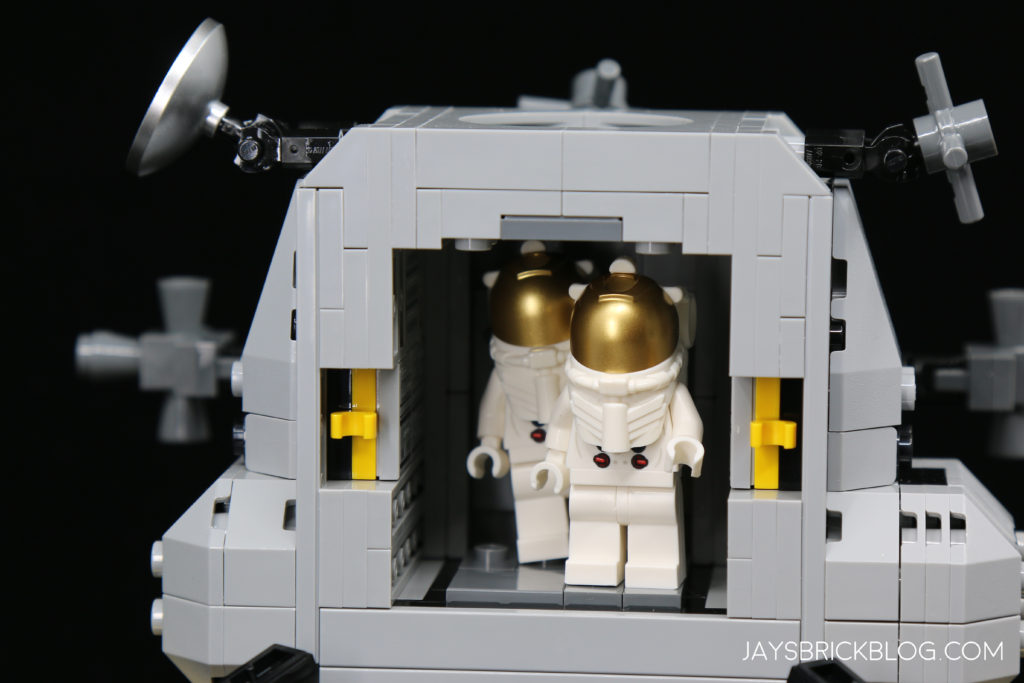 The Ascent Stage can be split into 3 sections, and there’s plenty of space inside for both Astronaut minifigures. 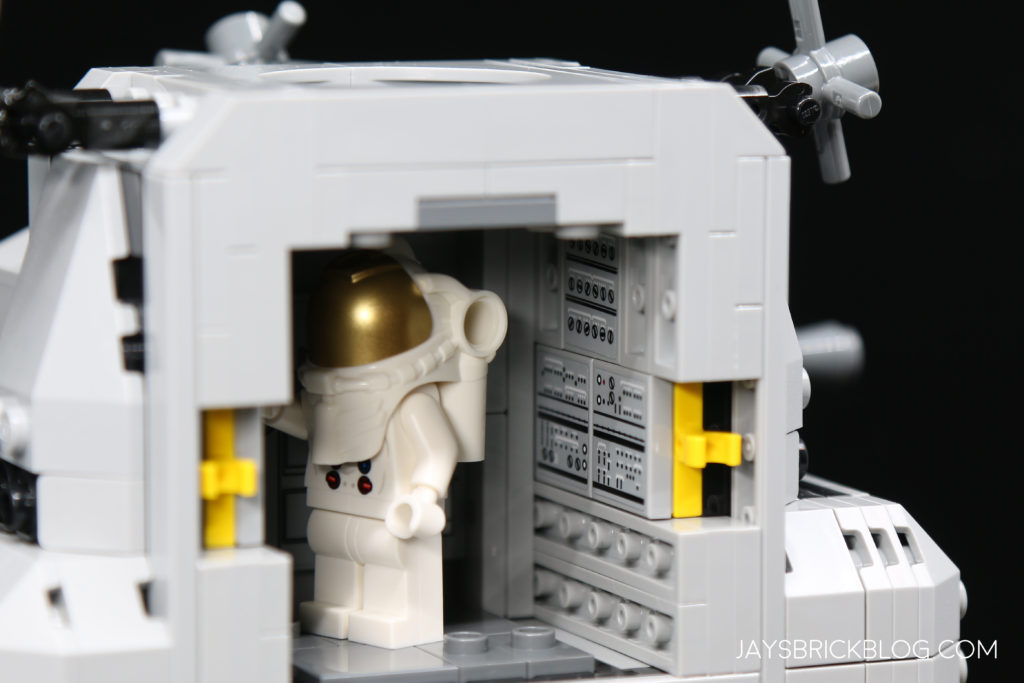 The interiors are remarkably detailed, with stickers used to replicate the control panels, terminals and lights within the Lunar Lander. 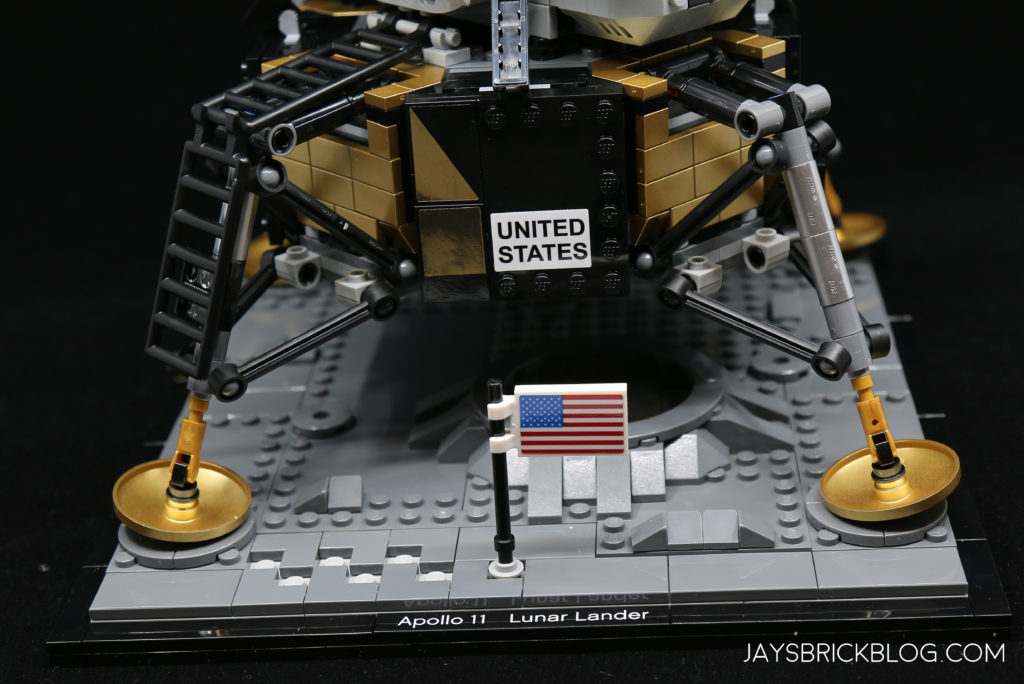 Here’s a look at the Descent Stage, which snuggles in nicely into the Lunar Base. 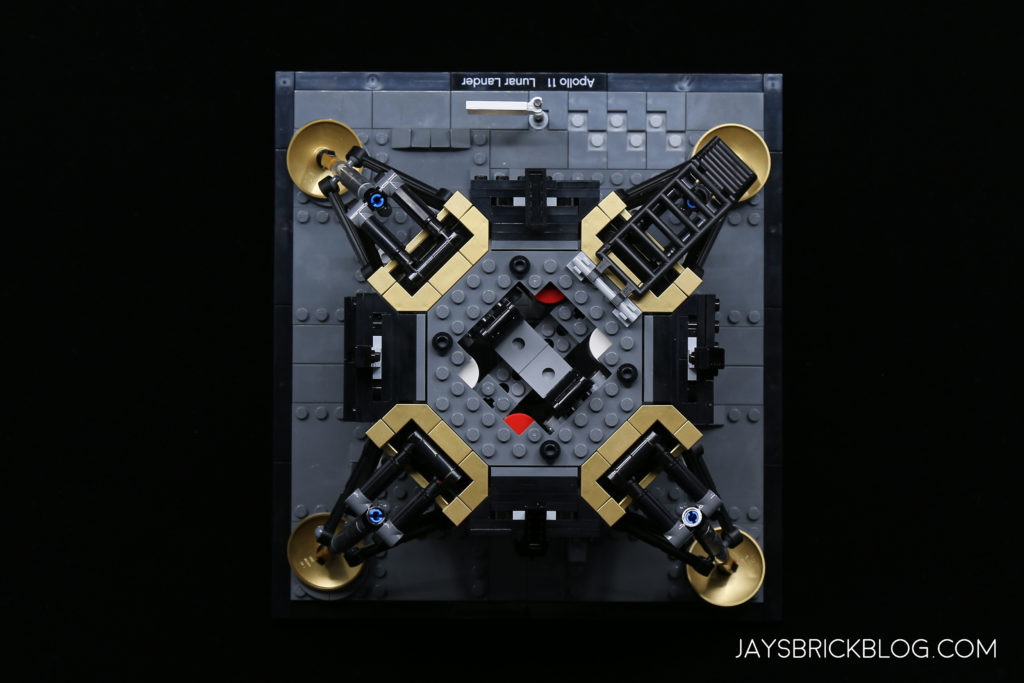 Here’s the view from above, which will help you appreciate the angles and geometric brilliance of the design. 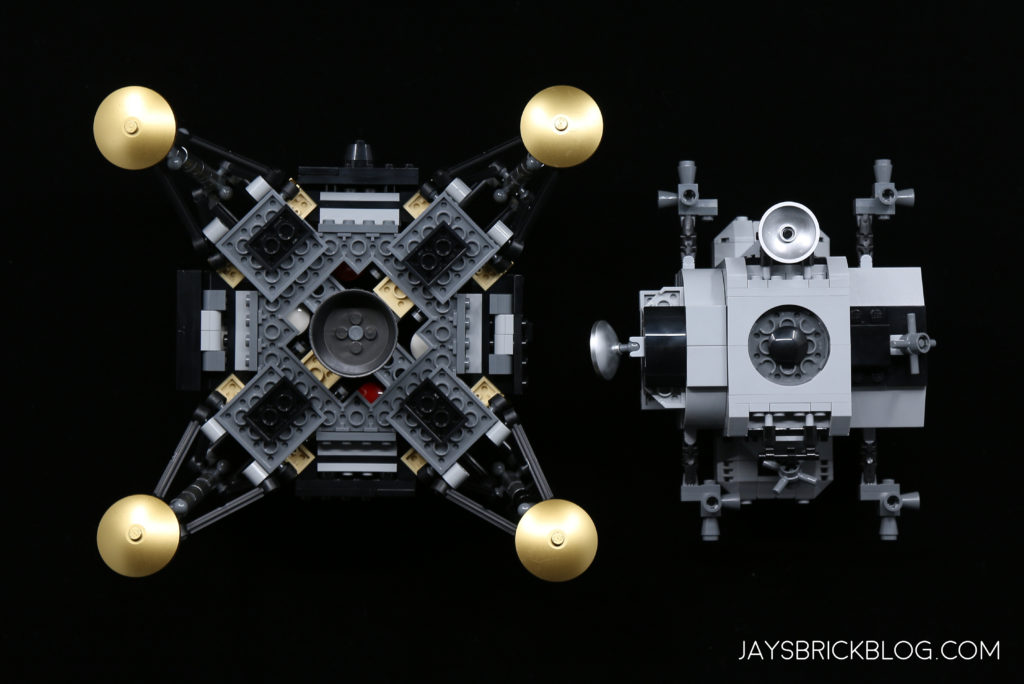 And here’s how both stages look from the bottom.

The landing gear look quite thin in photos, but are actually pretty sturdy, and I was very impressed with the build techniques employed not just to get the look and angle right, but how the legs are reinforced to the body using Technic ball joints.

Unfortunately this means that the legs are rigid, so you can’t really reenact the moment the legs fold out as it approaches the Lunar Surface. 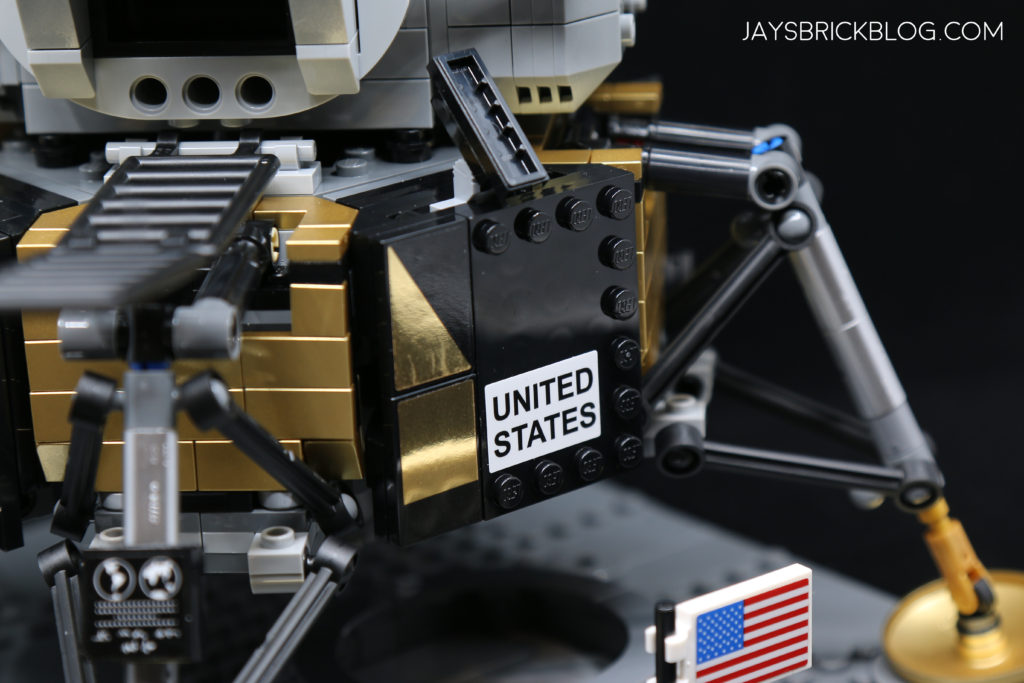 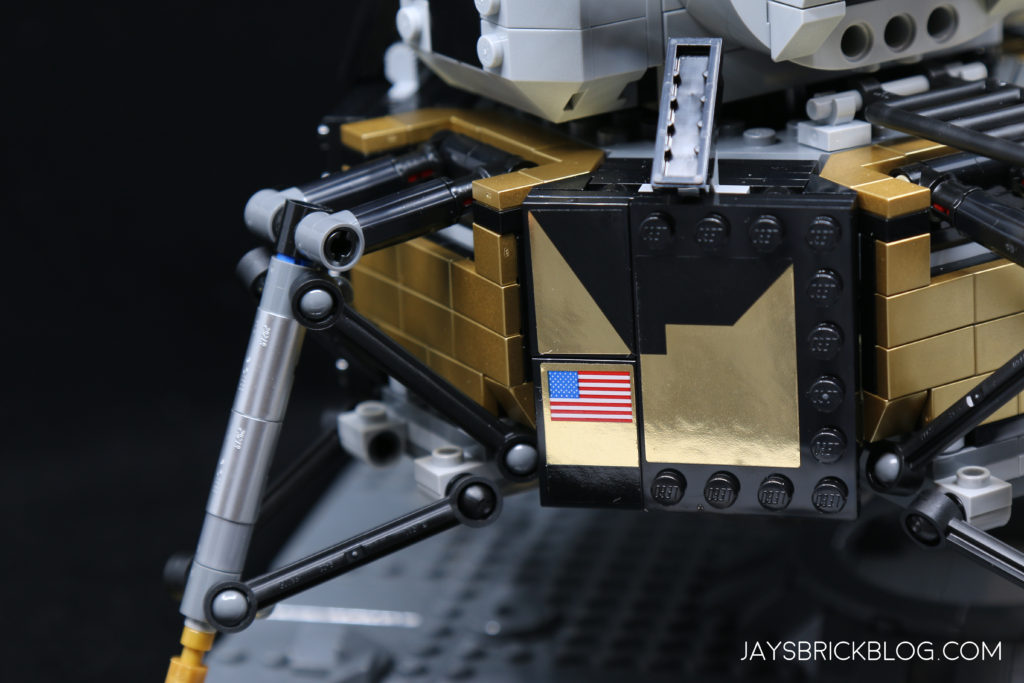 The absolute standout feature of the Lunar Lander is the generous helping of shiny gold stickers, as well as the aforementioned drum-lacquered elements, mostly tiles but also the Landing Gear that give the Lunar Lander its distinct colour.

The reflectiveness of these parts give the Lunar Lander its iconic look, and I’m so pleased that LEGO included so many of these elements to ensure that they got the look just right. 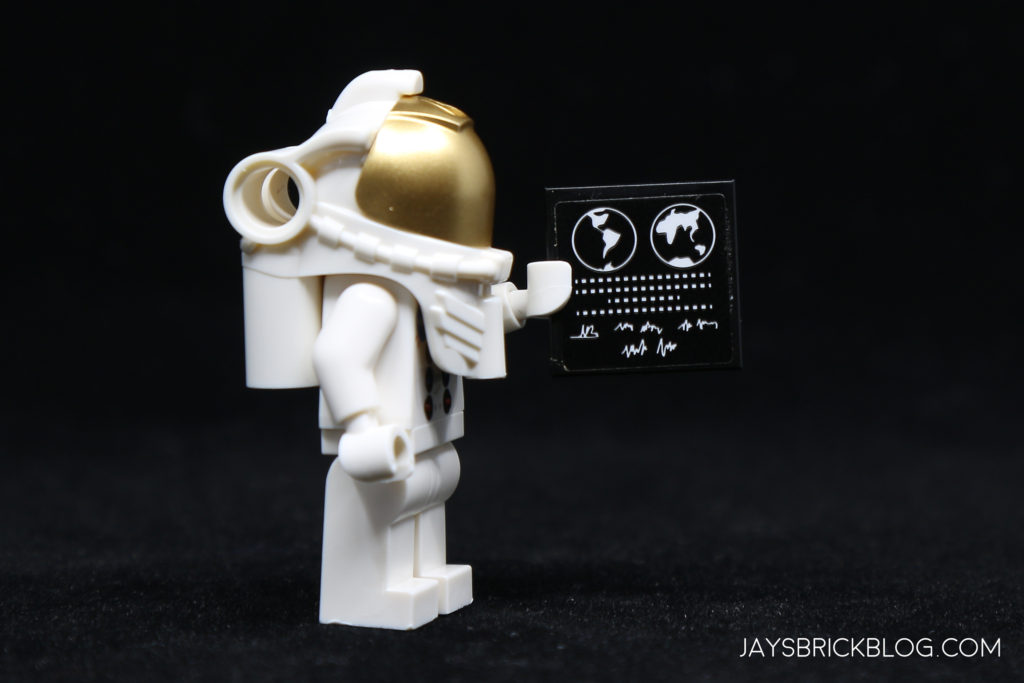 I just love that they also included the Lunar Plaque, attached to one of the legs, albeit it being a stickered piece. It contains signatures of all 3 Apollo 11 astronauts, President Richard Nixon, two hemipsheres of Earth.

Unfortunately the text “Here men from the planet Earth first set foot upon the Moon July 1969, A.D. We came in peace for all mankind” isn’t legible on the LEGO tile. 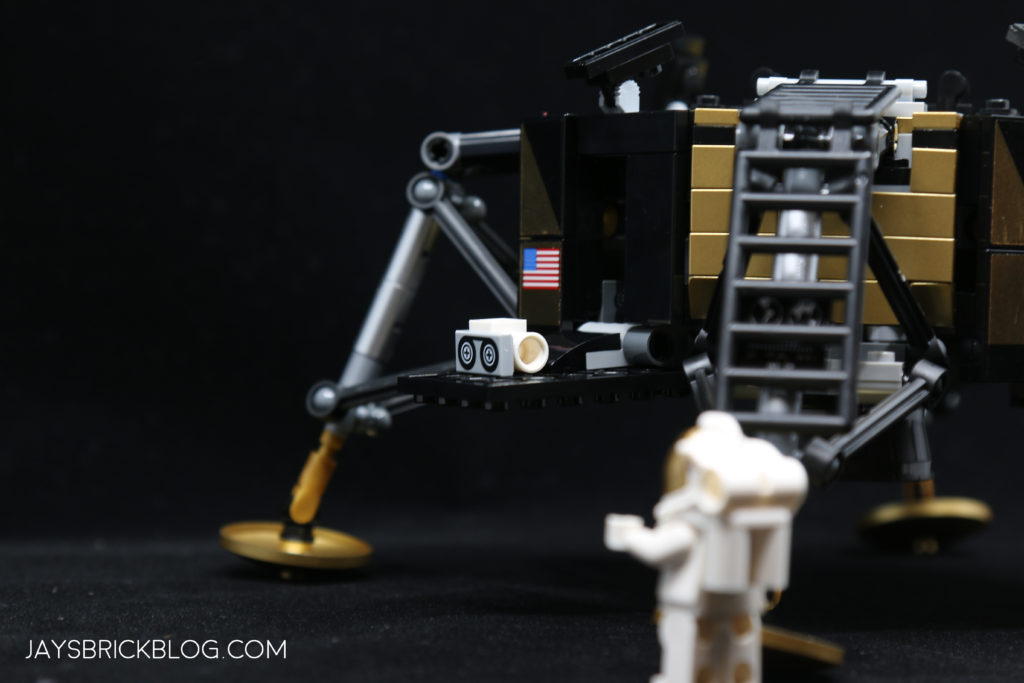 There are two hatches in the set, which fold outwards. One contains the video camera, which captured all that amazing footage from the Lunar Surface – and another which contains the Laser Ranging Retroreflector which was left on the room.

The Laser Ranging Retroreflector serves as a tool that scientists can shoot lasers at to measure the exact distance to the moon.

Unfortunately, the set doesn’t come with the Hollywood movie set that was so instrumental in faking the whole thing to the entire world. KIDDING.

Final thoughts: 10266 Lunar Lander is a worthy companion to the Saturn V rocket, which set the bar immeasurably high for any NASA-related space set.

The entire experience, from thumbing through the historical information in the manual, to assembling the Lunar Lander and finally admiring it on display is just outstanding, making this one of the standout sets of 2019.

The geometric angles of the set to give it its distinct octagon shape is one of my favourite parts, and the overall design is accentuated by the abundance of metallic gold parts to give the LEGO Lunar Lander that realistic connection to the real thing.

I also really liked the play features, and the ability to separate the Ascent stage from the base, which should be plenty of fun for those who want to re-enact or use this model to explain how the Astronauts got off the moon to any science-loving kid.

The educational value of this set is just amazing, and this makes for an amazing model to build with younger kids.

There are so many things you can re-enact with the model, such as the landing, the moonwalk with the footsteps in the base, and even the historic moment when the video camera captures Neil Armstrong’s first step onto the moon when he uttered the “one small step” line. 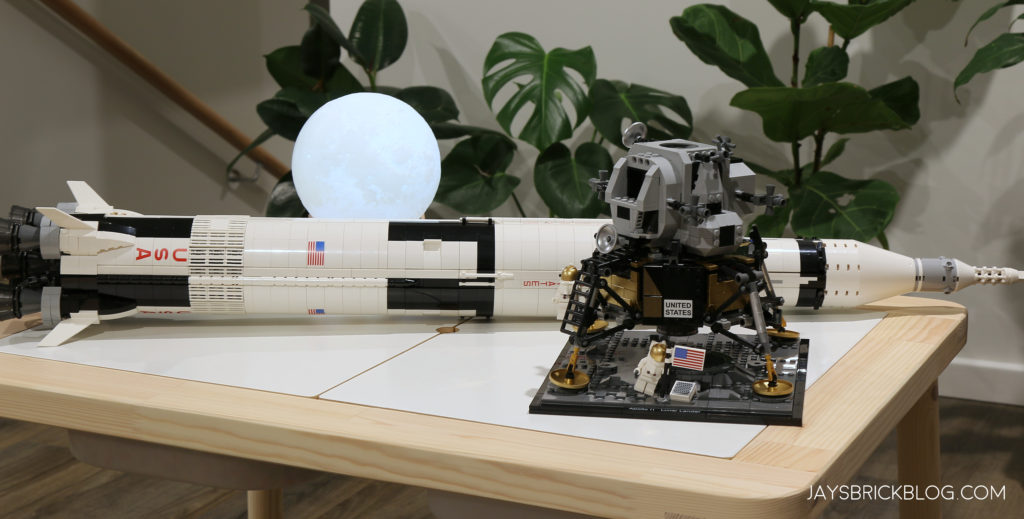 For adults, the base and the entire model makes for a fantastic display piece, and it’s small enough to on any desk or shelf, unlike the Saturn V which is just massive.

The only downside I can think of is the heavy reliance of stickers, especially for the reflective exterior sections. For the price and the gravity of this set, printed elements would be my preference, and this may irritate a fair few LEGO fans.

The minifigures could also be improved slightly to contain arm printing that incorporates the USA flag, as well as the inclusion of the Apollo 11 patch on their suits, which I find to be a strange omission.

The price is also not too prohibitive, and I was more than happy to pony up full price for the set.

That said, this is truly an outstanding set and I highly recommend this to anyone with an interest in Space, the moon landings, or if you just want set that’s just designed remarkably well.

If you’re a happy owner of the Apollo 11 Saturn V set, you almost owe it to yourself to pick this set up to go with it, but I feel like you probably won’t need a lot of convincing from me.

Thanks for reading and I hope you found this review and celebration of the 50th anniversary of the Moon Landing fun and useful!

Have you built the Lunar Lander set? I’d love to hear your thoughts of the set. 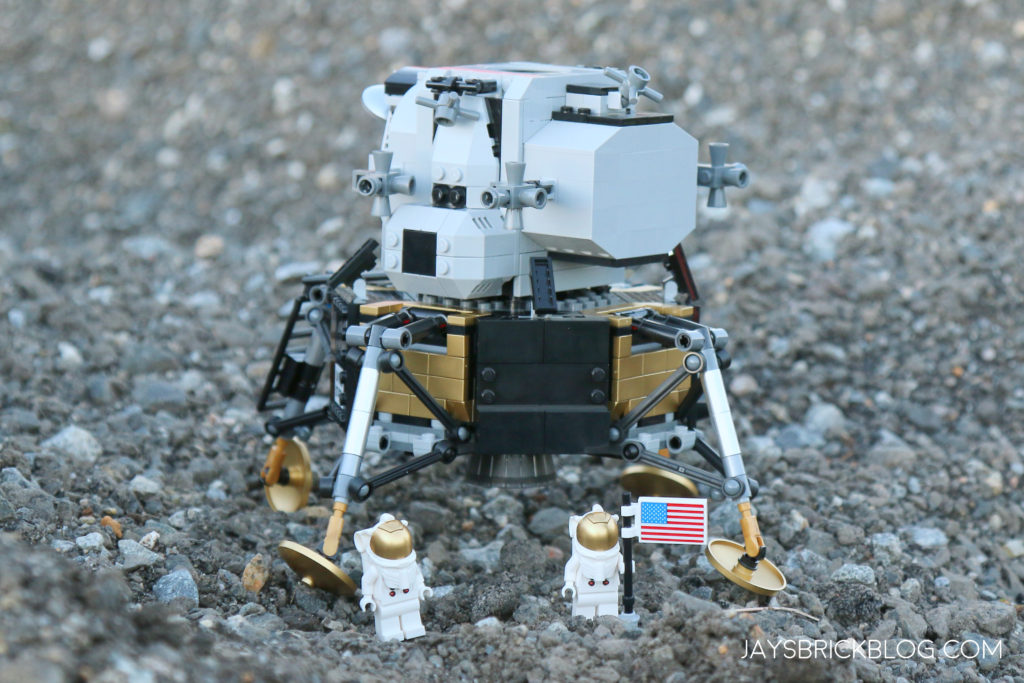 I’ll leave you with this photo which was the closest I could get to the Lunar Surface without having to spend billions of dollars.