I had such a good time reviewing 21032 Sydney that it made me quite eager to put another Architecture set together. 21029 Buckingham Palace is one of my “backlog” sets from last year which I never got around building because I had a baby around that time.

Now that life at home has gotten back into a manageable routine, I spent the weekend checking this set out and photographing the LEGO Architecture Buckingham Palace.

I employed the help of my wife to help with this review! She was responsible for building the set and lent quite a bit of insight into the build experience! 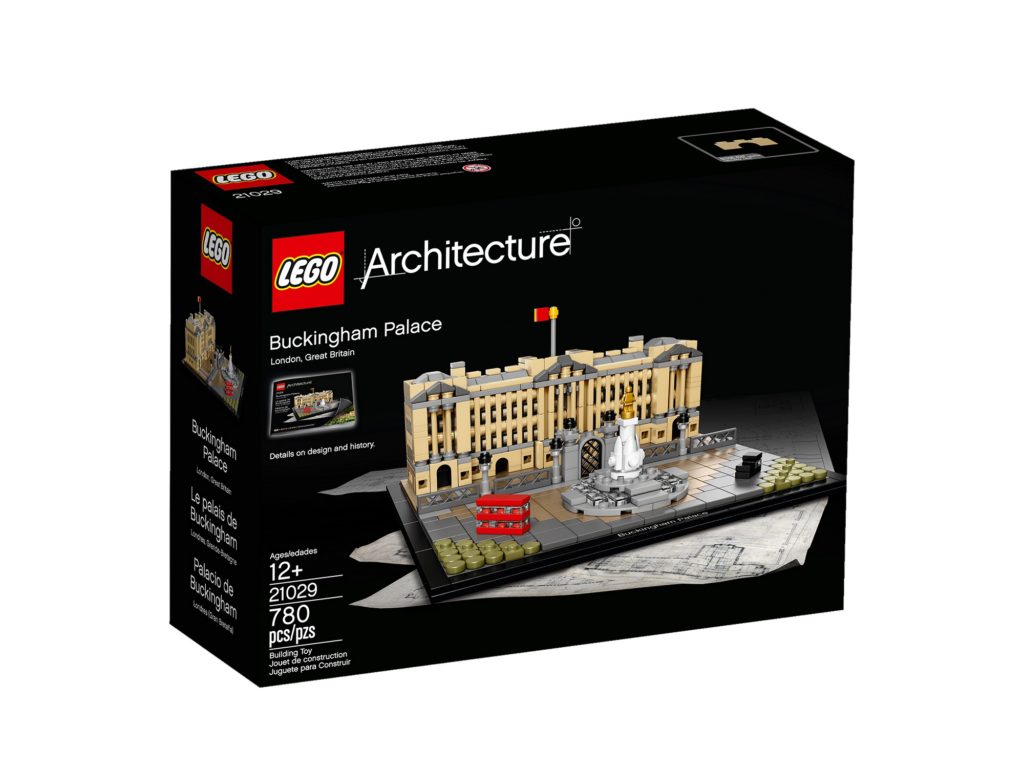 I’ve never been to England, but I’m no stranger to Buckingham Palace, given its prominence as one of the most important historical landmarks in England. The official residence of the Queen of England, Elizabeth II this iconic structure has become synonymous with the British monarchy.

The opulent nature of Buckingham Palace, and its role within the royal family is reflected not only in its scale (775 rooms, 1514 doors and over 40,000 lightbulbs) but also its architectural legacy. 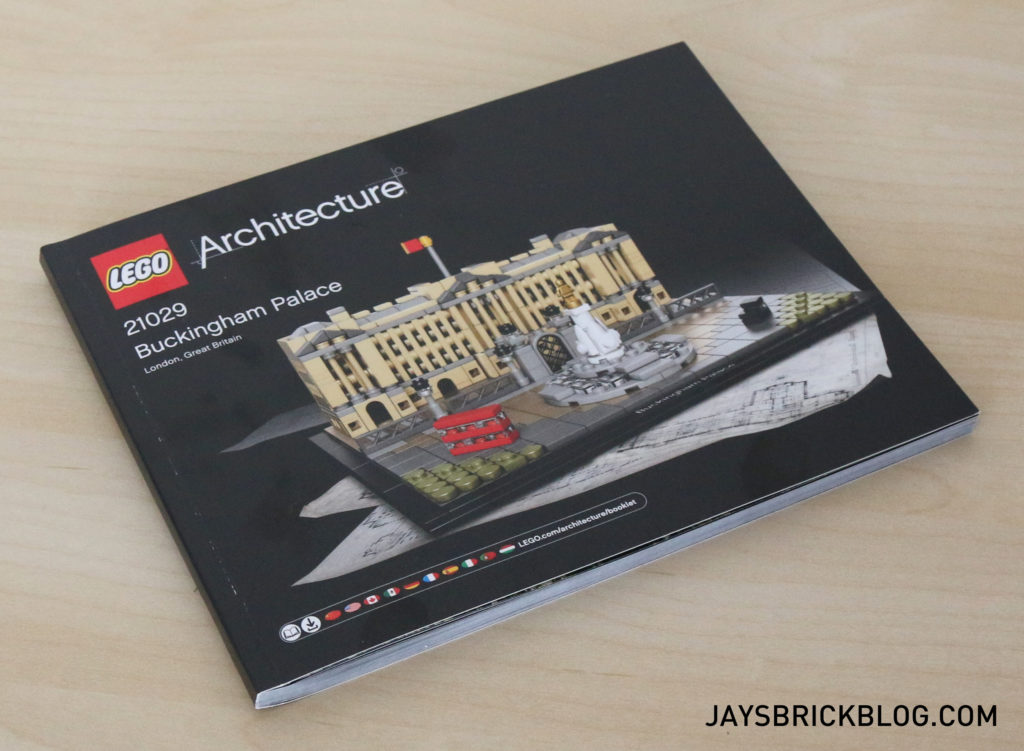 Here’s a look at the instruction manual, a sleek black booklet which should be familiar to fans of the LEGO Architecture theme.

In addition to the build instructions, the booklet contains a bits of information covering the history, role and notable architects who contributed to the design of Buckingham Palace.

This is one of my favourite aspects of Architecture sets as you feel like you’re able to travel vicariously via these factoids and gorgeous photography. 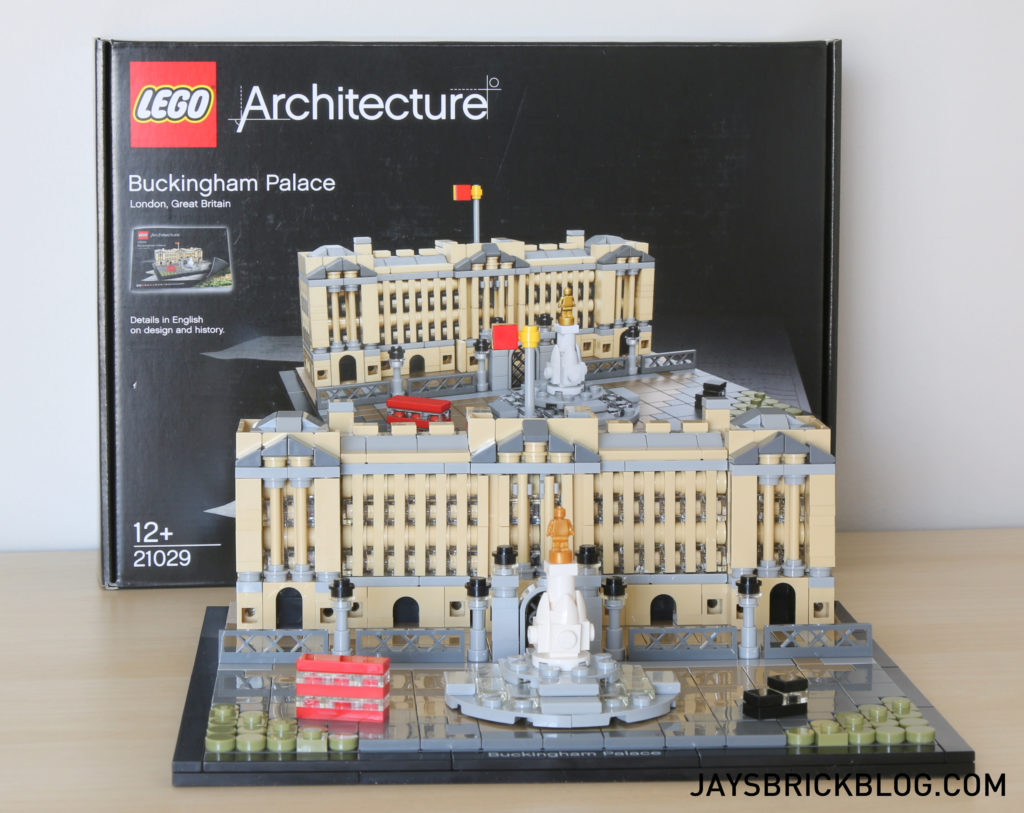 Here’s the completed set. The set’s large piece count (780 pieces) is quite deceptive as most of it is made out of really small elements such as studs, plates, tiles etc.

While the set isn’t the largest, the build process was quite long and tedious. Taking about an hour and a half to put together, the build was not the most exciting as you had to mostly snap small elements together. There was also quite a bit of repetition and it wasn’t until it all came together that it felt rewarding. 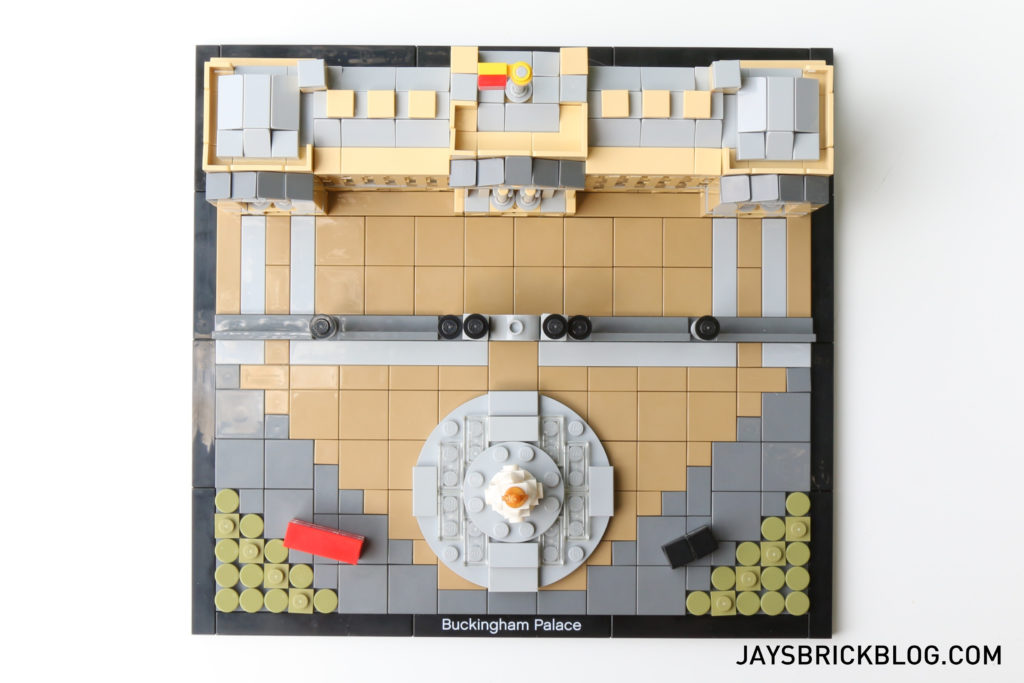 The complete model occupies an almost square base (the footprint of the set is 24 x 26 studs) which is quite pleasing to the eye. As you can see the tilework isn’t the most elaborate but I do like how symmetrical it all looks. 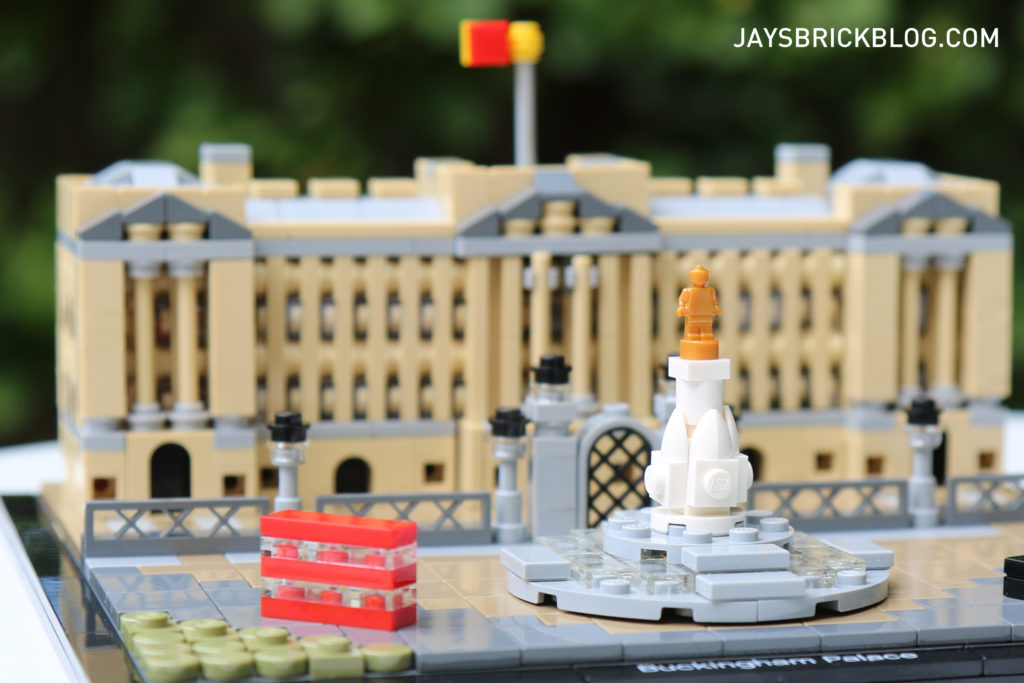 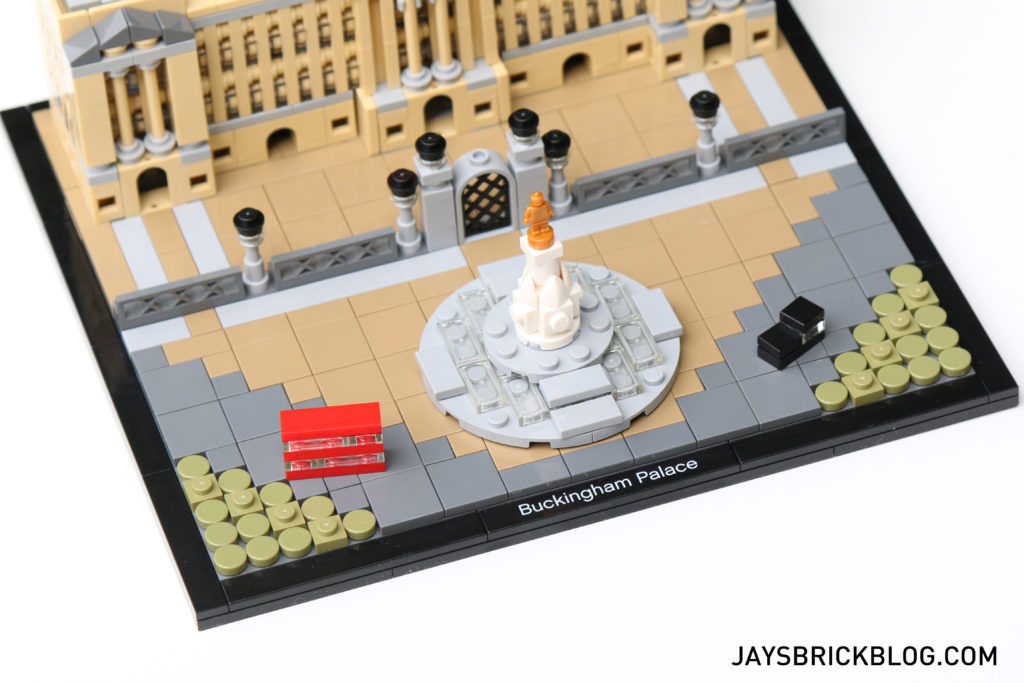 Out the front, I really like the Victoria Memorial, a large monument dedicated to Queen Victoria. The use of transparent tiles for the fountain area is quite clever and I also like the white pylon in the middle, which is topped by a pearl gold statuette – a fairly rare element that can only be found in the Berlin Skyline set, and the 2016 LEGO Inside Tour set. 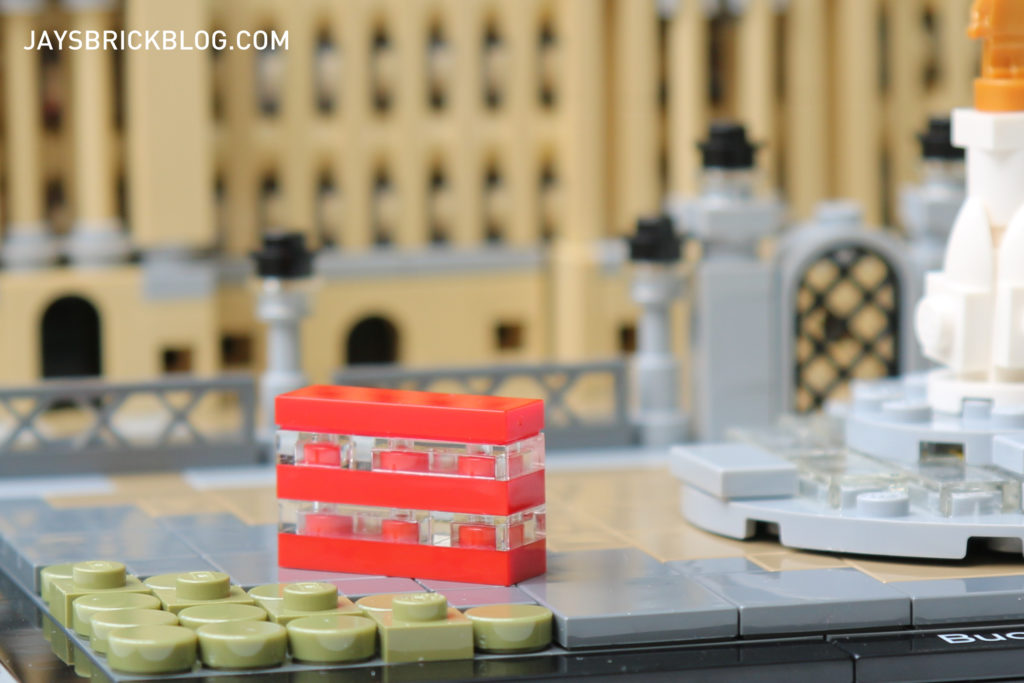 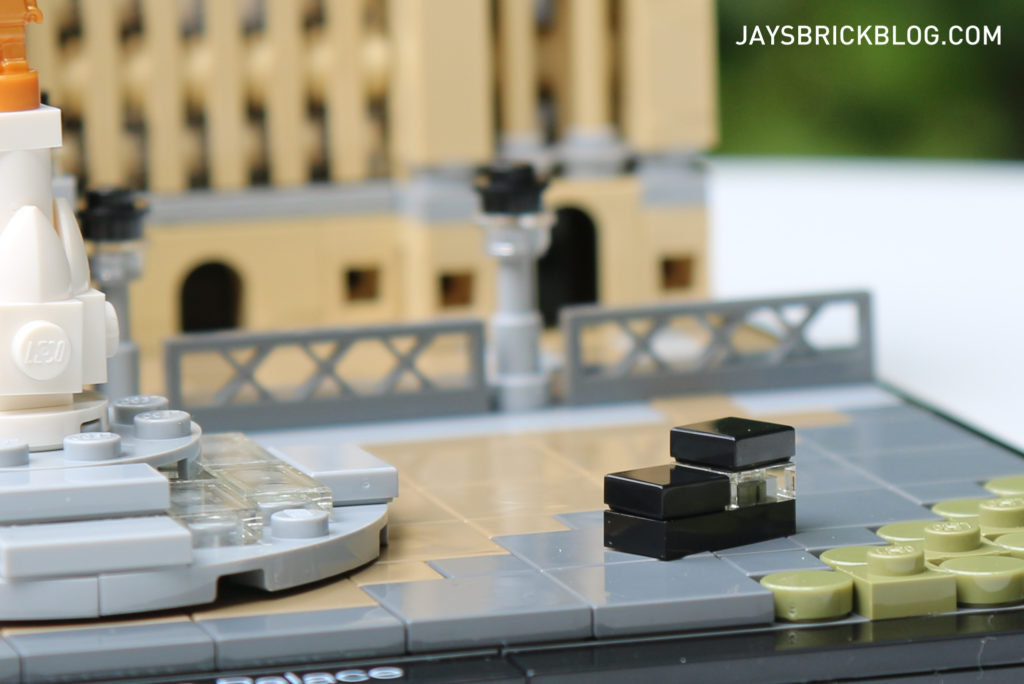 Out the front, there are also two micro vehicles that should be no stranger to anyone that’s ever visited London – a red double decker bus and a black taxi.

While these models are quite small and may seem insignificant, they add a lot to the entire model by adding a sense of scale to Buckingham Palace in the background. 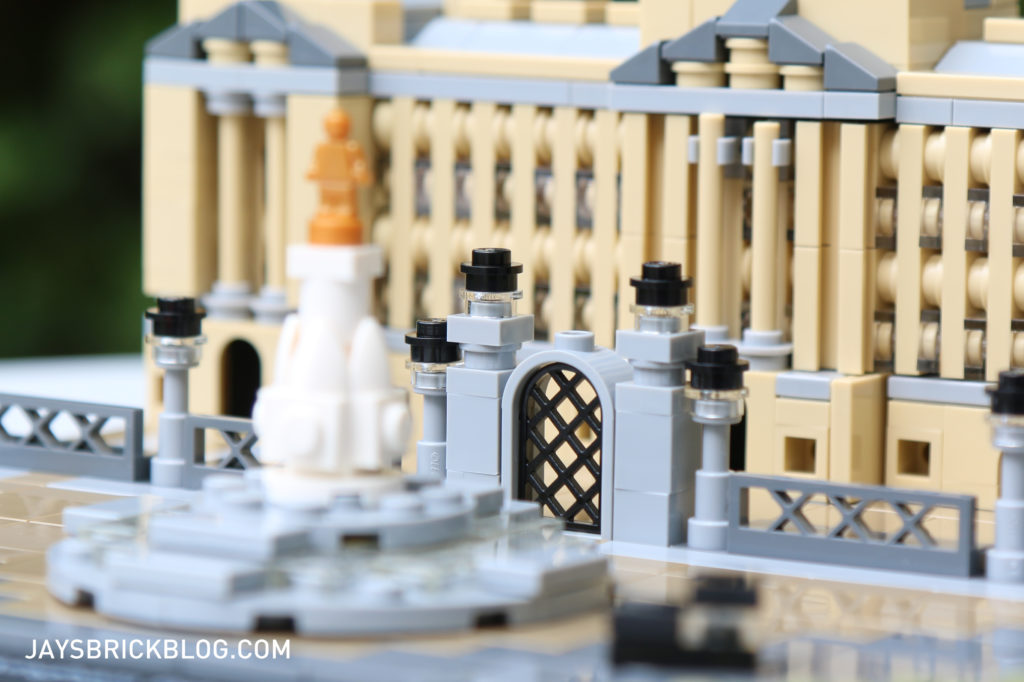 The elaborate gate to Buckingham palace is represented quite well with these LEGO lattice windows and I also like the use of telescopes for pillars that are adorned with lamps. 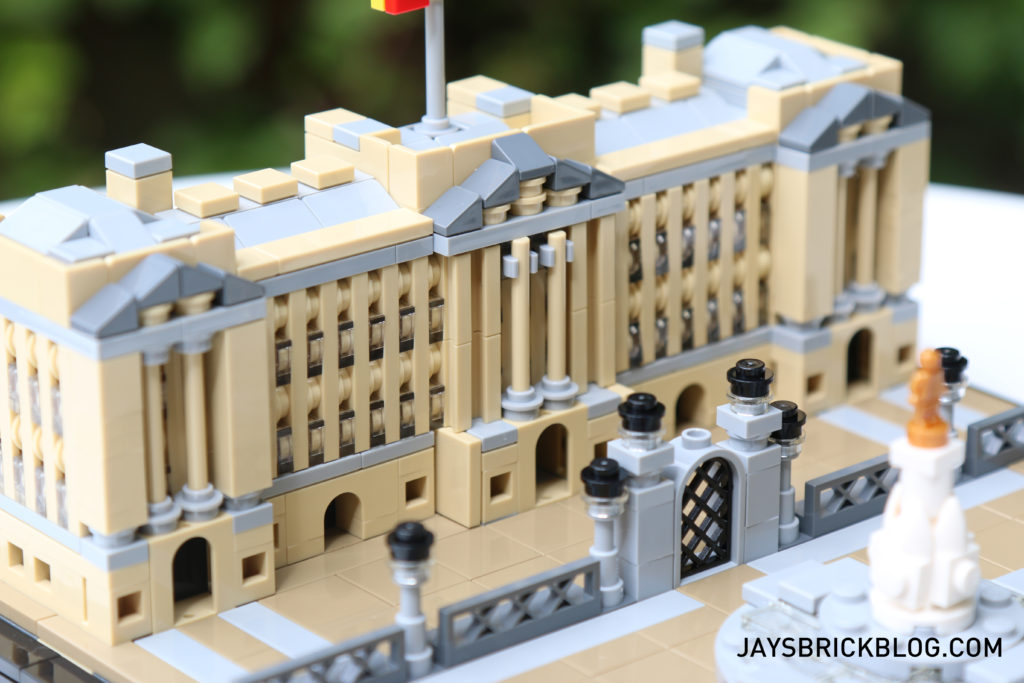 On to the facade of Buckingham Palace, which is a lovely pattern of tan and “negative space”. There are three major “segments” of the building with prominent pillars and wall sections that sink into the building.

The middle segment is slightly elevated and there are things that I both hate and like about it. Firstly, I think the use of the plate with slide to create that straight pillars is really clever.

On the flipside, I hate the round pillars which just stick out awkwardly. For a set that relies in precise patterns and symmetry, this is a really odd design element and distracts from what is a really pleasant-looking facade. 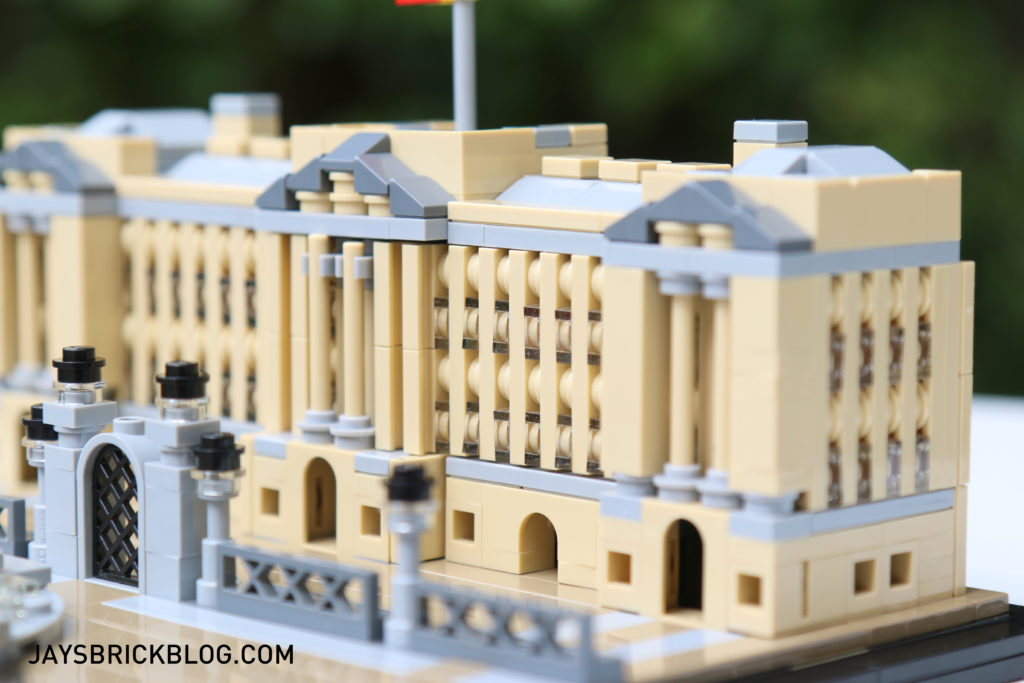 The windows are achieved by layering plate on plate, punctuated by transparent tiles and tan studs sideways. It’s by far my favourite thing about Buckingham Palace because the design just works so well in replicating Buckingham Palace’s windows. 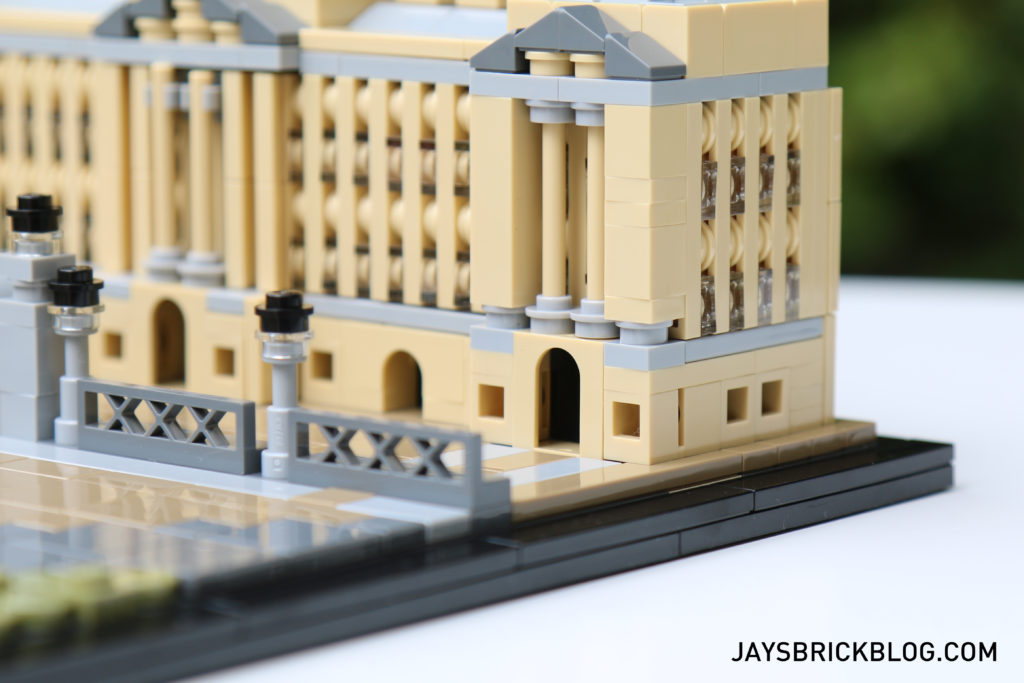 I also really dig the arches and use of reversed headlight bricks. There is an unsightly gap on the side because of the headlight brick, but it’s not something you’ll be looking at all the time.

The flag pole on top uses a combination of red and yellow and is meant to signify the Royal Standard of the United Kingdom which flies when the Queen is home. When the Queen is away, the Union Jack is flown. Never knew that, so I was pretty glad to learn something new from this set!

It’s kind of a wasted opportunity to not have a printed tile for the flag. 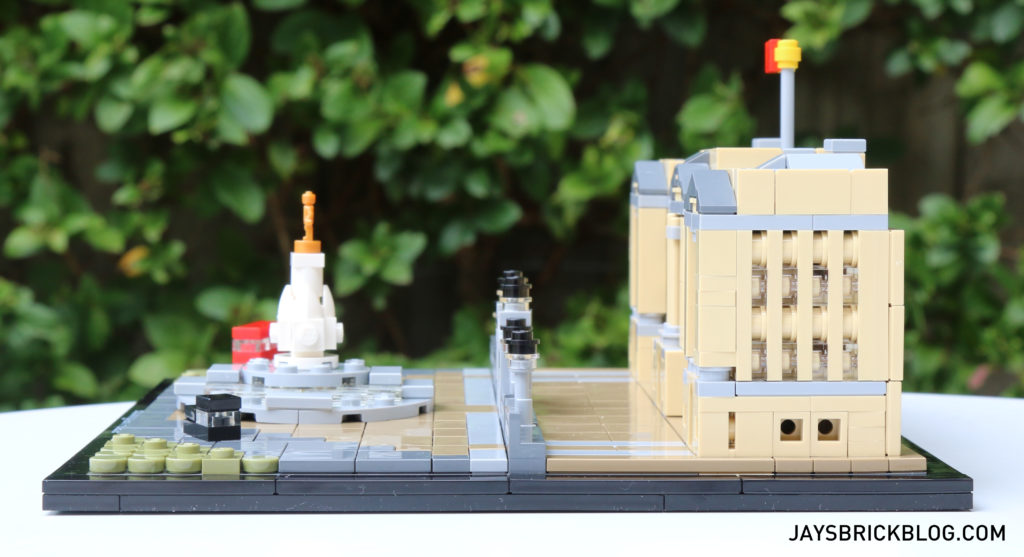 Here’s how the set looks like from the side. 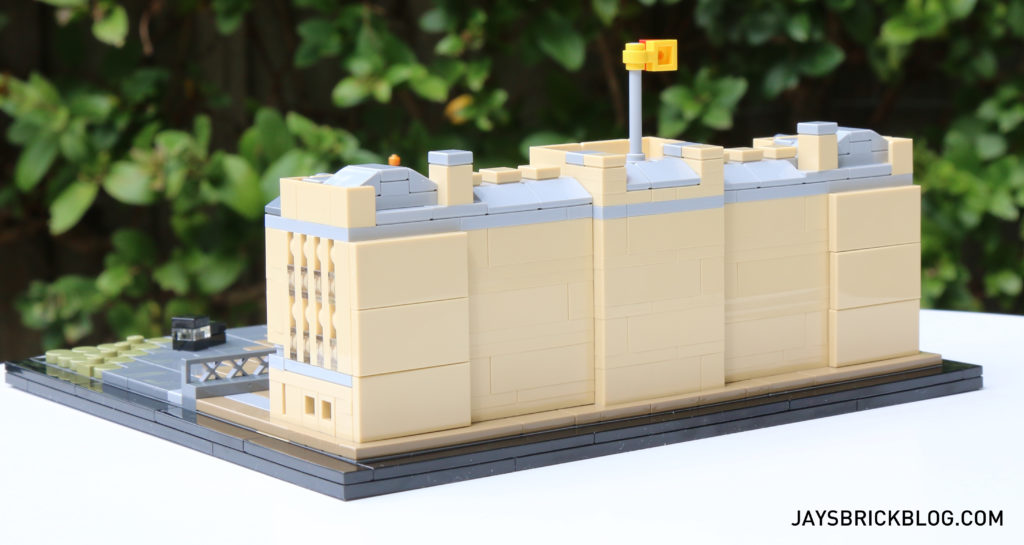 The back is pretty plain, but you’re not going to be looking at it much anyway. 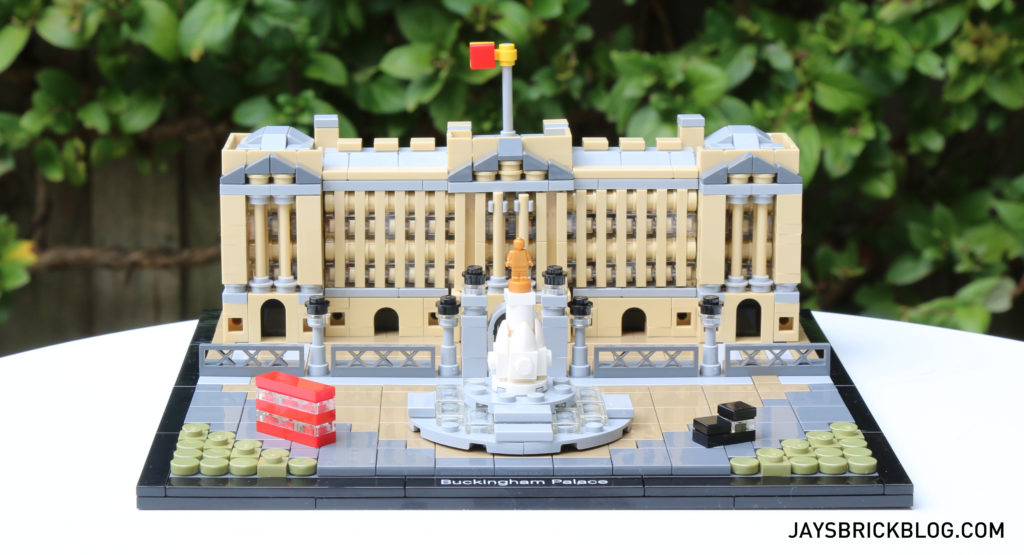 Final thoughts: As a relatively inexperienced LEGO Architecture enthusiast, 21029 Buckingham Palace was quite an enjoyable model and makes for a great display piece.

The slightly tedious build process is offset by the pretty interesting build techniques employed to create the facade of Buckingham Palace. The sideways plates are pretty ingenious and make for a great visual effect when it’s all completed.

One of my favourite things about Buckingham Palace is that it’s just the right size – neither too big or too small. Despite the large footprint of the set, it shouldn’t be too hard for LEGO fans to fit into their existing displays without having to displace your other LEGO sets around much.

The sense of scale thanks to the Memorial and vehicles outside are also very clever, which makes for a very sophisticated and well thought out design.

The end result makes for a very attractive set that will delight LEGO Architecture fans. If you’re relatively new to the theme like I am, it’s also a great set to start off with, and unlike some other Architecture sets that can sometimes be a little plain, Buckingham Palace hits all the right notes thanks to its very textured facade.

Like most sets in the theme, the set is quite pricey for what you get, and if you don’t appreciate LEGO models at this scale or are not a fan of LEGO Architecture, this isn’t one for you and you’re better off buying other sets.

The elements included, while numerous are also very basic and miniscule, so it doesn’t exactly make for the best parts pack after you’re done with it.

All in all, I quite liked Buckingham Palace and will definitely be leaving this one on display for quite some time.

Thank you for reading once again! If you want to pick this set up, your best bet is to head online to LEGO’s online store as Architecture sets can be quite hard to find unless you live near an official LEGO store.

If you’re a fan of LEGO Architecture and own this set, I’d love to hear your thoughts on it in the comments!

« Meet the all new characters from LEGO Minifigures Series 17!
2nd half of 2017 LEGO Highlights from the New York Toy Fair »