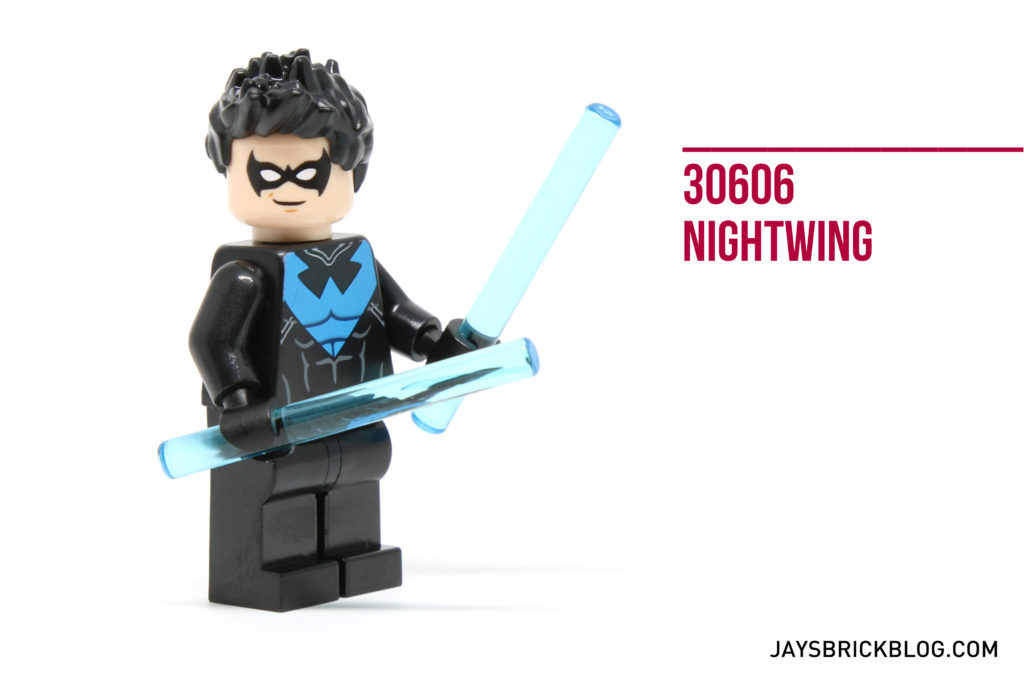 LEGO’s latest DVD release Justice League: Gotham City Breakout started going on sale in Australia yesterday, 22 June and I wasted no time picking it up for the sole reason of getting the exclusive polybag – 30606 Nightwing!

It’s been ages since I’ve watched a LEGO DC Super Heroes DVD (I believe the last was Super Heroes Unite) which was decent but not really my thing. I’ll be frank, I only buy these DVDs for the exclusive polybags included. 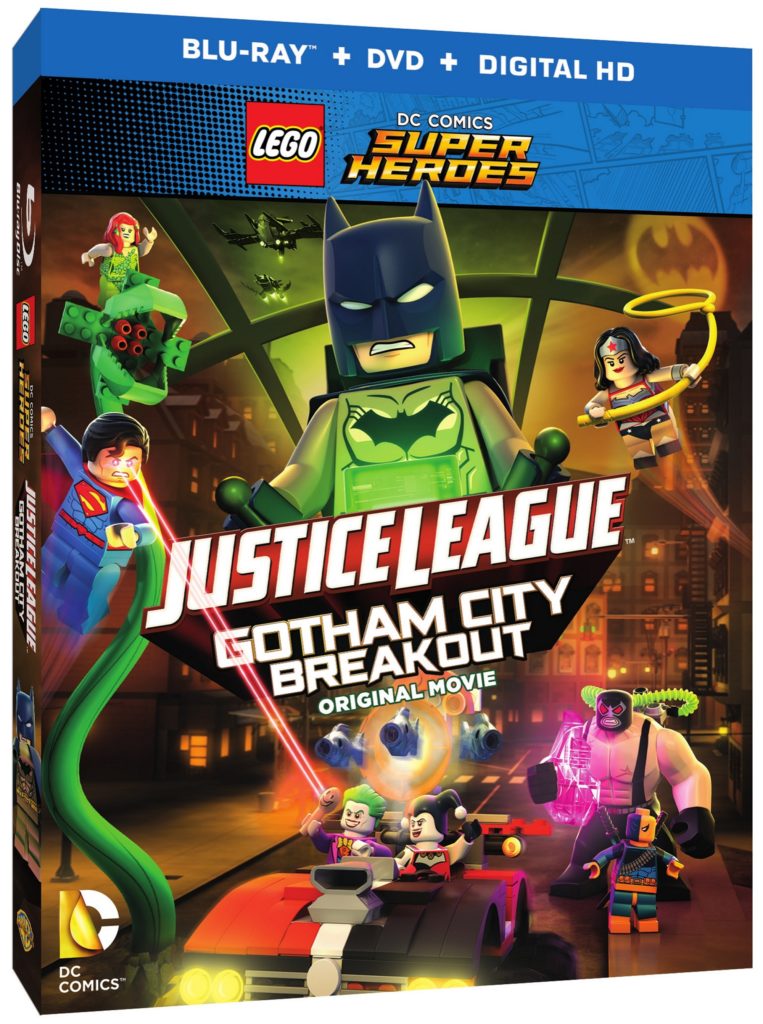 The DVD version that comes with the Nightwing polybag is exclusive to Big W in Australia, so I would urge you to quickly go to your nearest store to pick one up before they sell out. Big W typically only receives very limited quantities of these and they sell out tremendously quickly. The Big W I went to (South Yarra) only had 6 copies in the entire store. 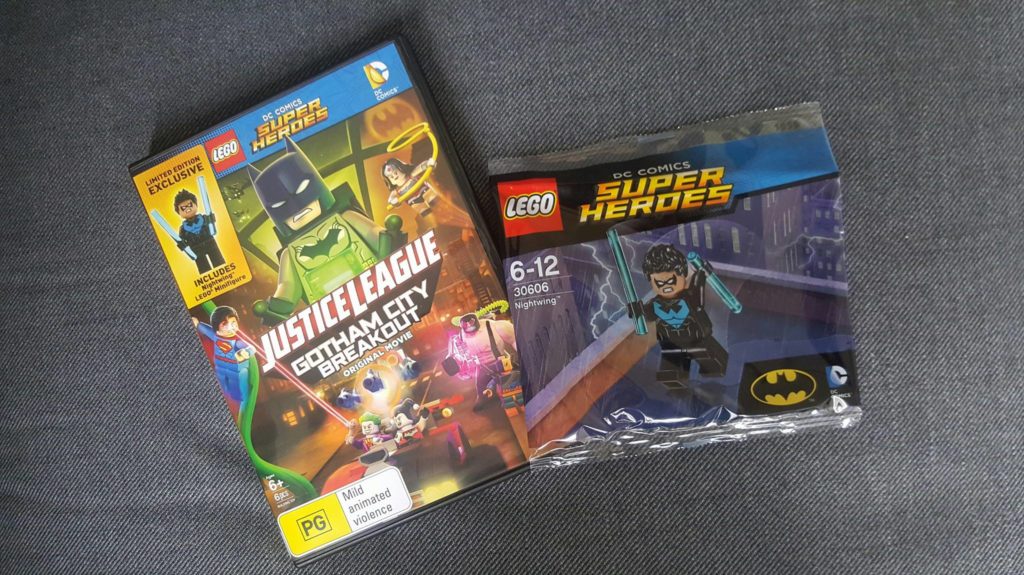 They’re currently selling for $16 at Big W (make sure you get the version with the Nightwing polybag!) which is a steal. Nightwing is an incredibly popular core character in the DC Universe, and this blue version is going to be highly sought after. This minifig is definitely going to jump in price, given its exclusive nature.

If you’re unable to buy it from Big W (or live in the US), you can also pick up a copy from Amazon! 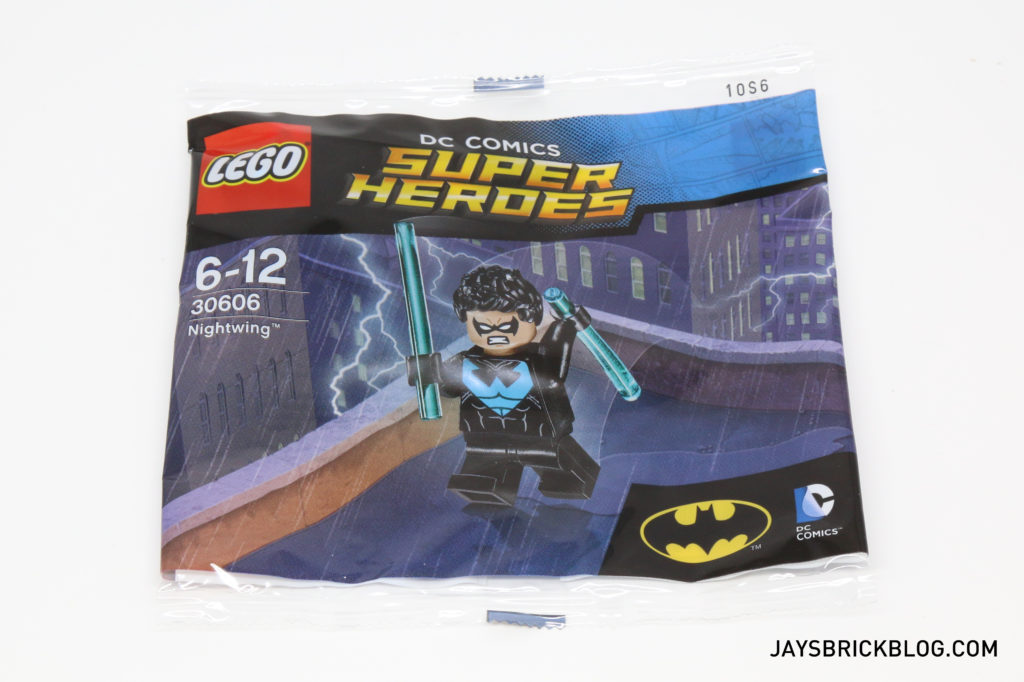 I like to joke that these exclusive polybags often come with a free LEGO DVD. Anyway, here’s a look at the polybag which is stuffed into the DVD case.

In addition to the minifigure inside, the contents include a small promotional leaflet which contains some photos of 2 new DC sets, 76055 Killer Croc’s Sewer Smash and 76054 Scarecrow’s Harvest of Fear as well as 76053 Gotham City Cycle Chase. 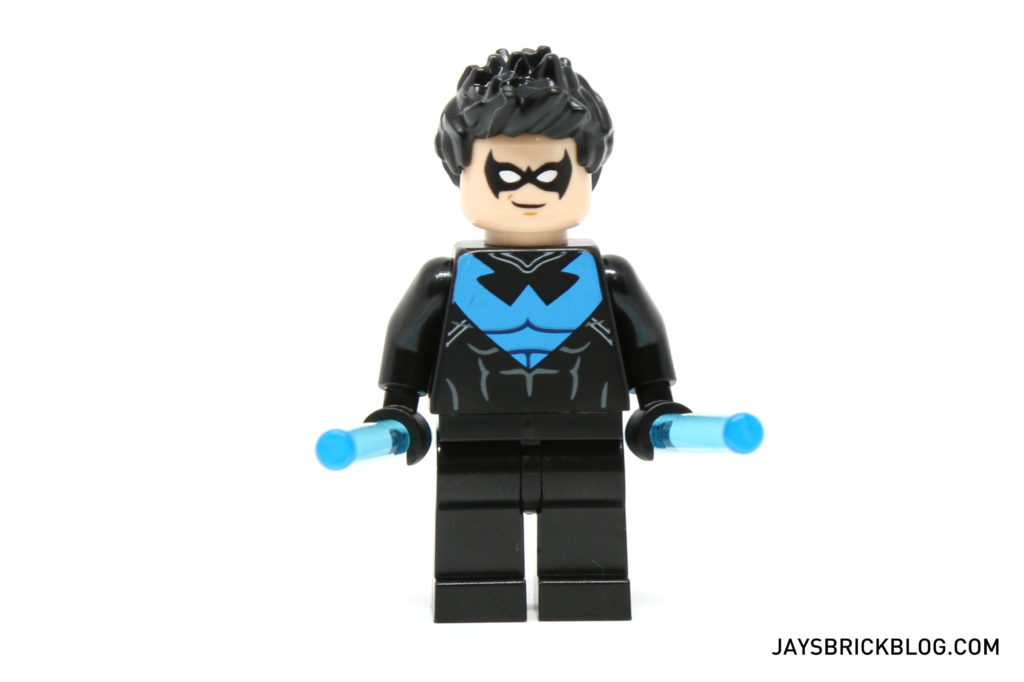 LEGO DC Super Heroes fans have been clamouring for a proper Blue Nightwing minifigure for awhile now. LEGO have only produced one Nightwing minifigure in his classic blue duds – in 2006’s 7785 Arkham Asylum. That version of Nightwing will set you back about AU$80 for a new version based on Bricklink average prices.

Nightwing was very briefly in a new red suit as part of DC’s New 52 but he’s now back to his classic blue and black costume for DC’s Rebirth – a move that’s been welcomed strongly by Nightwing fans who didn’t feel the red suited him well.

Dick Grayson’s blue and black costume is a feast for the eyes. It just somehow seems right. There’s the prerequisite muscle definition across his torso but nothing too overly detailed – no arm or leg printing which is fine.

Nightwing has a black spiky hairpiece and an eyemask, with a confident smile on his face.

I was pleasantly surprised to discover that Nightwing has a dual-sided head with an angry-teeth baring expression on the other side. Nightwing also has back printing with the continuation of his blue pattern on his back. 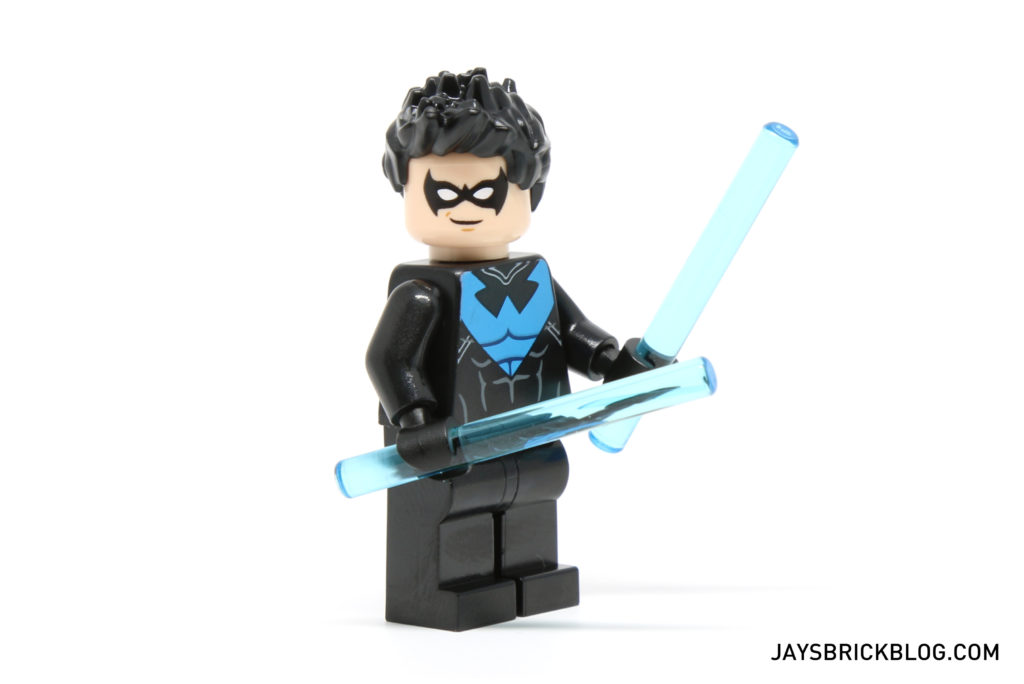 Nightwing is equipped with a pair of transparent blue Arnis sticks or batons. They’re pretty cool looking and their colours sort of matches with his colour scheme. 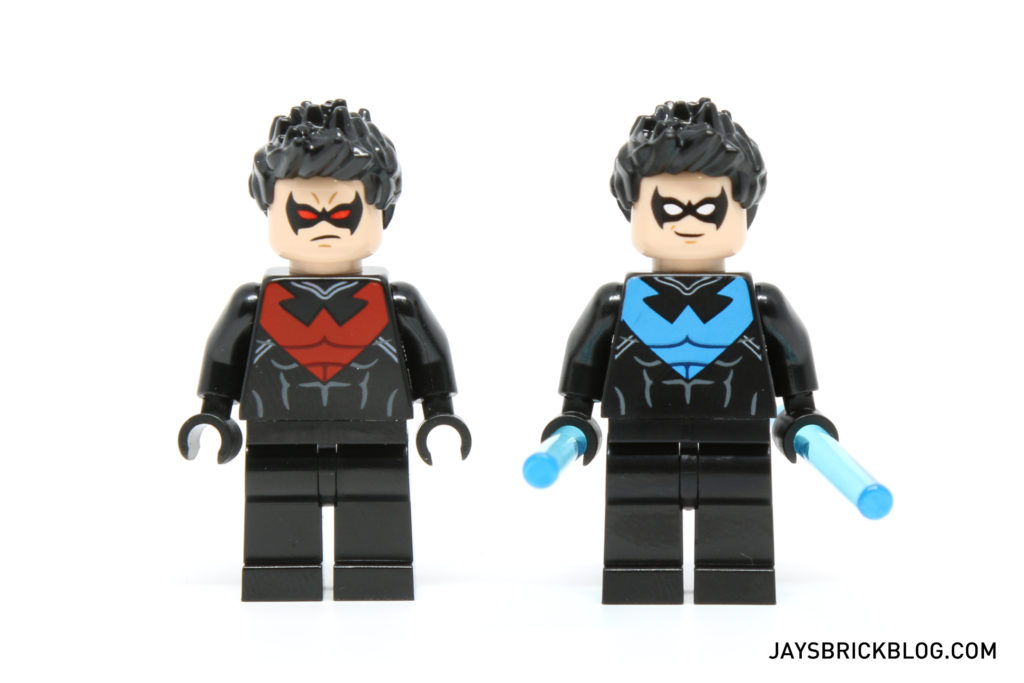 This is the comparison with the most recent Nightwing from 2014’s Man Bat Attack set which features the New 52 Nightwing in his red costume. As you can see, the torso design is pretty much identical, with the colours just swapped from red to blue.

There are some very tiny printing enhancements such as more defined lines on the new Nightwing, but for the most part, it’s a recolour of the red Nightwing’s torso. 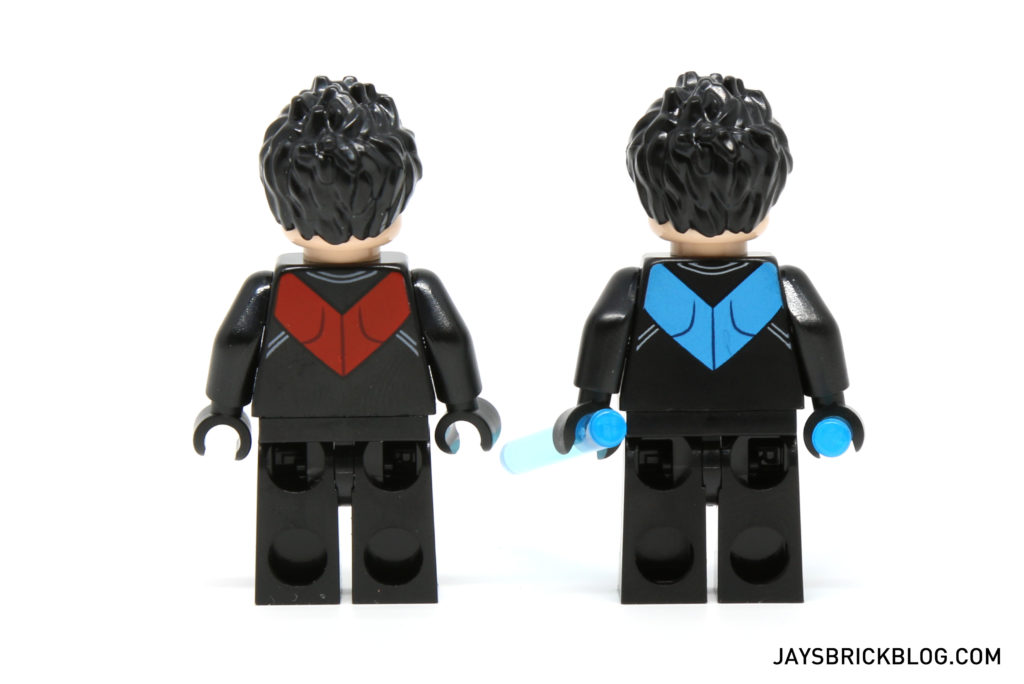 Here’s the view from the back.

I’m a little torn on the new Nightwing. While I am delighted that I finally get to own Dick Grayson in his signature blue costume without having to pay a bomb, I do feel that it’s a bit of a waste that LEGO didn’t update the torso design slightly. It feels a little lazy that LEGO just recoloured the 2014 version of Nightwing to bring him back up to speed with the new DC Rebirth version.

I do love the new face printing on Nightwing – I think his subtle smile looks really good on a superhero and reflects Nightwing’s personality quite well.

When all is said and done, we’re getting a new Nightwing in a blue costume which is nothing short of awesome. Nightwing’s reputation in comic books is legendary, and I’m a massive fan of Dick Grayson’s character and how he grew out of being Batman’s sidekick to establish his own, fully bad-ass identity.

I’ve never been this excited for a LEGO DVD exclusive since the Clark Kent minifig which has his Superman costume peeking out his civilian disguise. Nightwing’s status as one of the most revered DC characters and relative rarity as a LEGO minifigure should all but guarantee that this is going to be an extremely sought-after minifig.

I would recommend getting a copy of this DVD to get the Nightwing minifigure as soon as possible.

For Australians, head down to your local Big W to pick up a copy of Gotham City Breakout, but be sure that it’s the version with the minifigure included. If  can’t get to a Big W or they’ve sold out, you can order one from Amazon as an alternative.