For my next Pirates review, I’ve decided to take a look at one of the more interesting Pirates sets this year that’s not a Pirate Ship – the LEGO Pirates Chess Set!

This set was a bit of a surprise, springing up seemingly out of nowhere to join this year’s reboot and refresh of LEGO’s hallowed Pirates theme. The last time we got a proper LEGO Chess set was back in 2012, with the Kingdoms Chess Set. Find out if this set is purely a novelty or if you should add it to your LEGO Pirates collection! 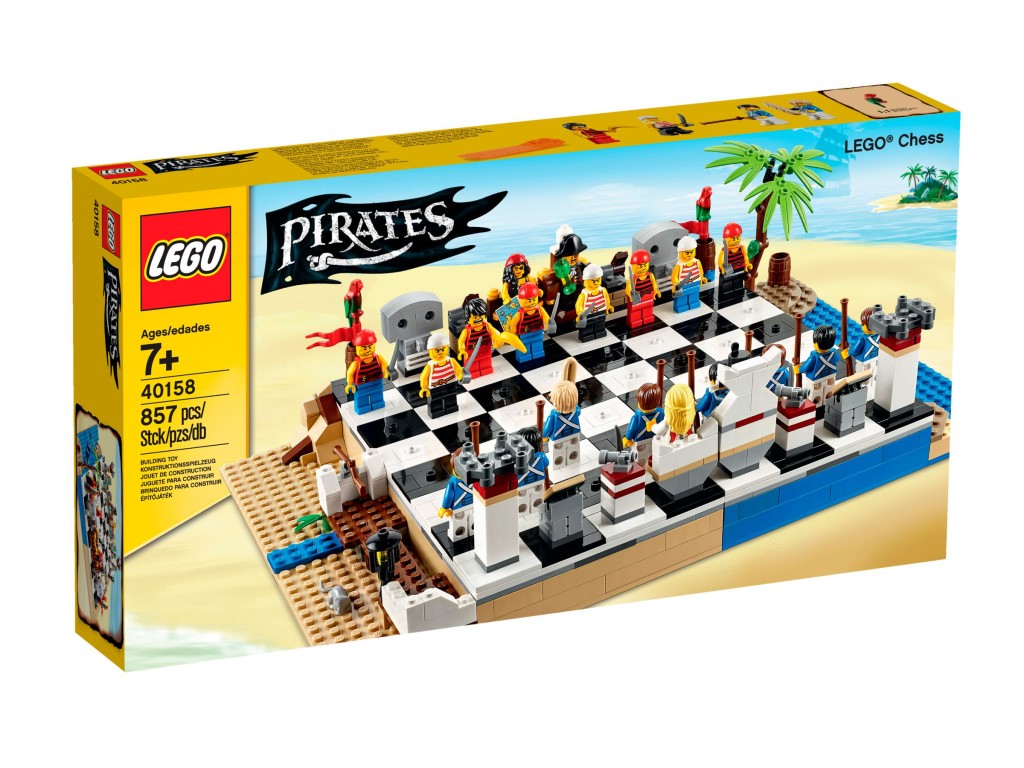 This is my first LEGO Chess set so I wasn’t too sure what to expect. Why did I get it? I thought the Chess set looked like a Pirates Battle Pack on steroids. There was an impressive amount of minifigures and the set’s attractive 857 piece count pushed me over the line to take a gamble on this set. Let’s see if it pays off. 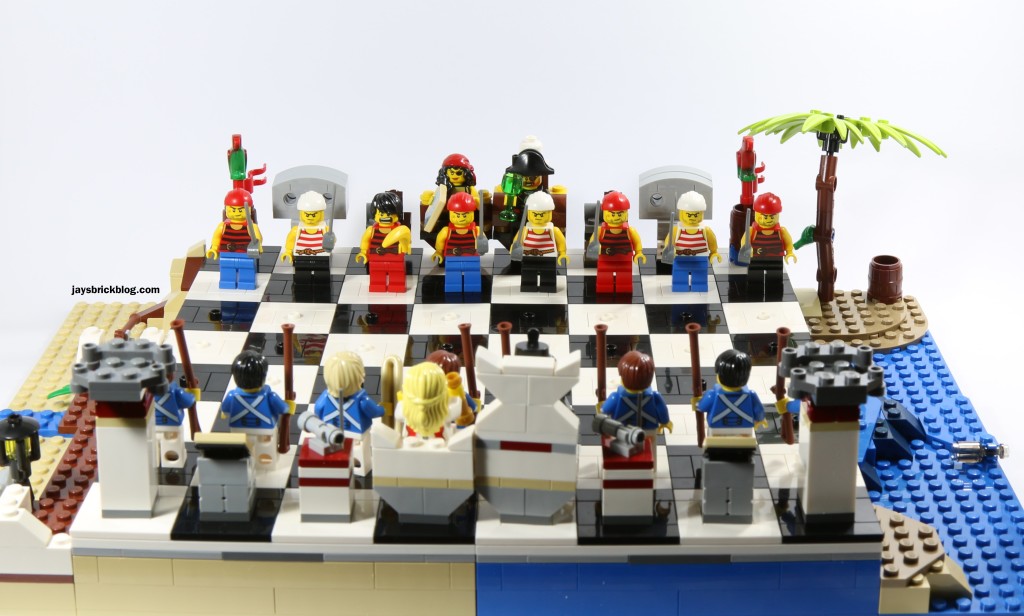 The Pirates Chess set was a relatively easy and simple build. You won’t find any cutting edge build techniques or innovative designs with Pirates Chess Set – you’re essentially building a giant flat square piece, with a few surprises here and there. 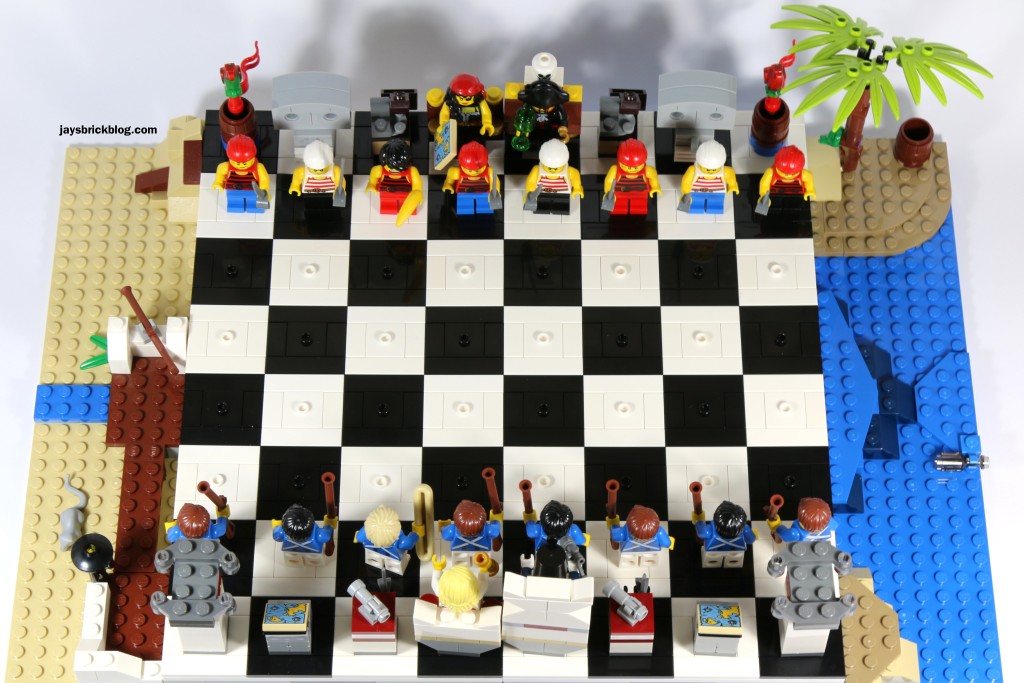 Apart from being an 8 x 8 grid of white and black squares, the Pirates Chess Set is flanked by two narrow brick built scenes, depicting a portion of a fort and a beach. More on how they will be used in a bit.

As you can imagine, laying the tiles to form the chessboard is quite tedious and repetitive and is easily the most mundane part of the entire build. 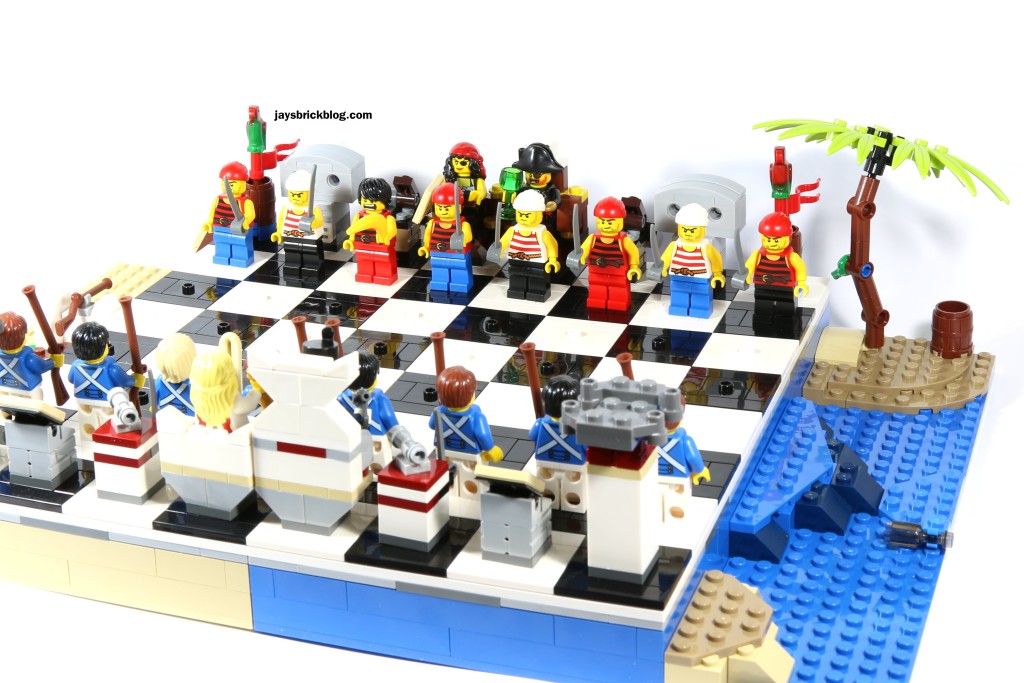 Instead of White vs Black, the Pirates Chess Set has the Bluecoat Soldiers squaring off against the Pirates. If you want to quickly expand your collection of Pirate minifigures, the Chess Set is your best bet as you get 10 of each side. Like I said earlier, this is a mega Pirates battle pack! 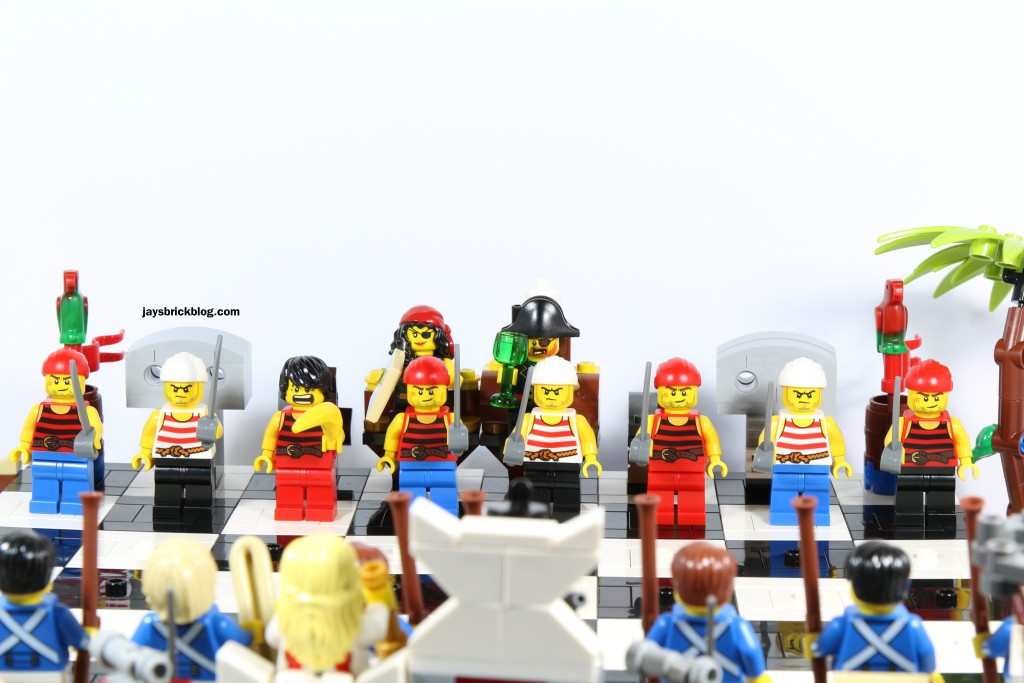 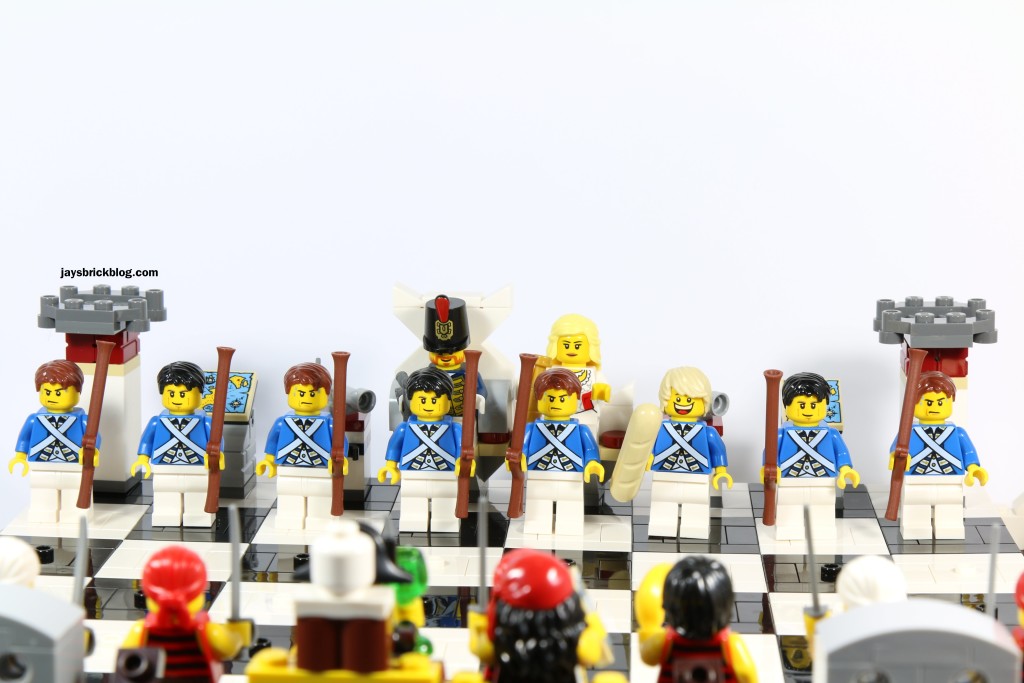 Unlike the previous Kingdom Chess sets, there are fewer minifigures per side, with more brick built structures to round out the non-Pawn pieces, except for the King and Queen. I’m divided about this – I think the diversity of the pieces are necessary so that its easy to tell the different pieces apart, but at the same time, I’d have preferred more minifigures.

Let’s take a closer look at the individual pieces. In case you forget, a standard chess side has 8 Pawns, 2 Rooks (Castles), 2 Knights, 2 Bishops, a Queen and a King. 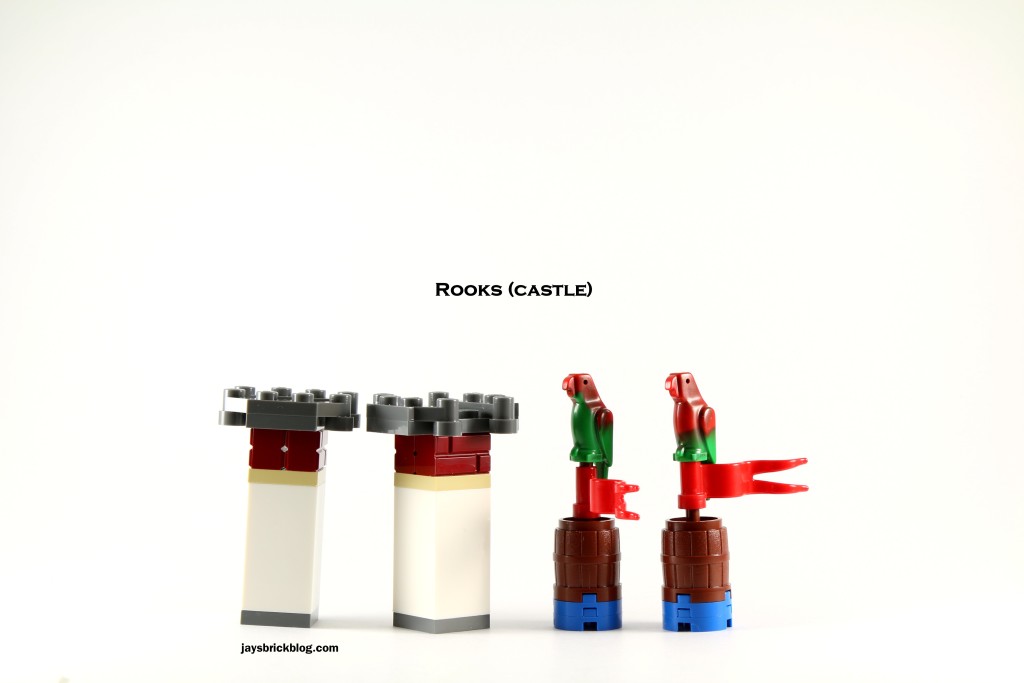 The Rooks are honestly quite boring. On the Bluecoats side, you get some strange pillars and on the Pirates, you get Barrels with Parrots perched on a flagpole. The only thing I like about the Bluecoat Rooks are the gorgeous red masonry bricks. Other than that, meh. 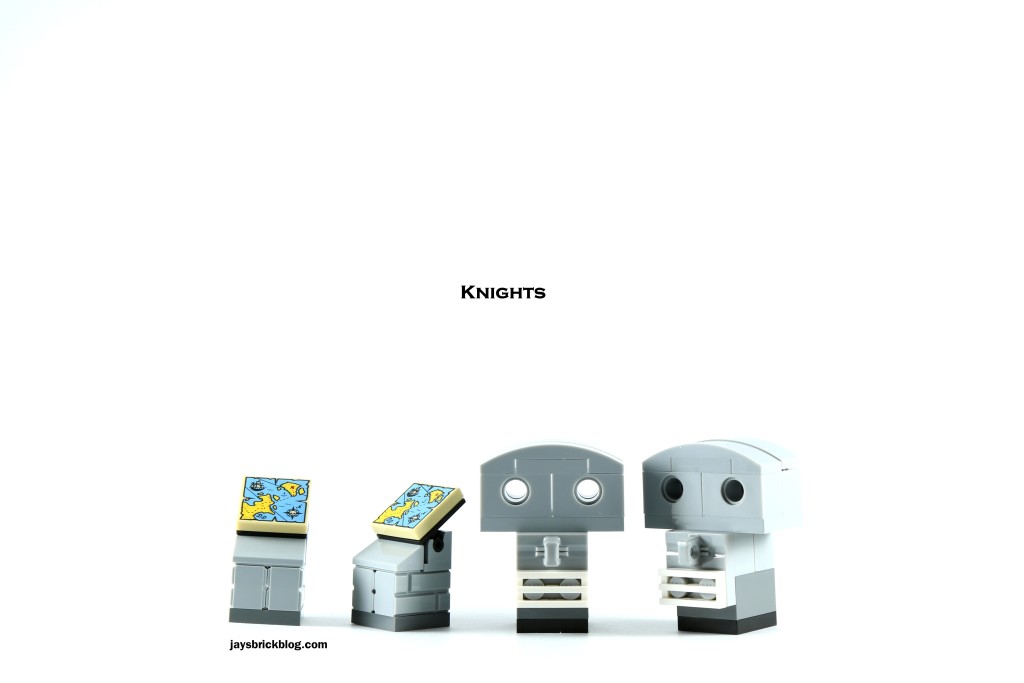 The Knights were also a little underwhelming, especially the Bluecoat Knights which were nothing more than a nautical map on a pedestal. The Pirate Knights were slightly more interesting, being skulls although they look a lot more tribal compared to conventional Pirates skull. 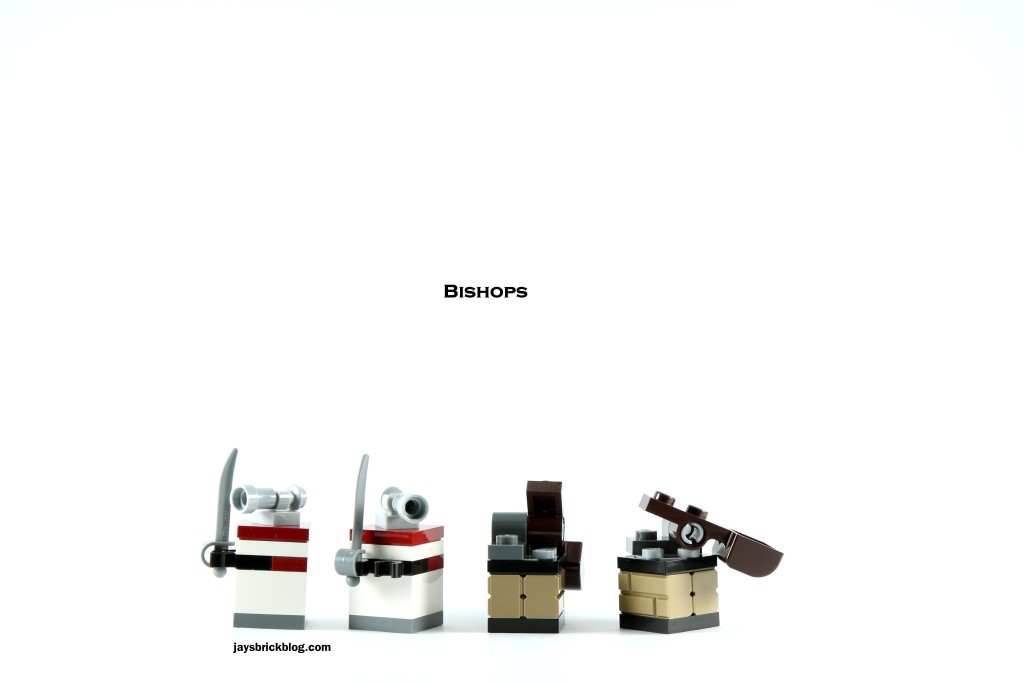 The Bishops are weapons-themed, with the Bluecoats getting a weapons rack which has a cutlass and telescope and the Pirates getting a catapult. I felt there was a pretty big disconnect between actual Bishops which are traditionally lanky and narrow and these LEGO Bishops which are a little squat. 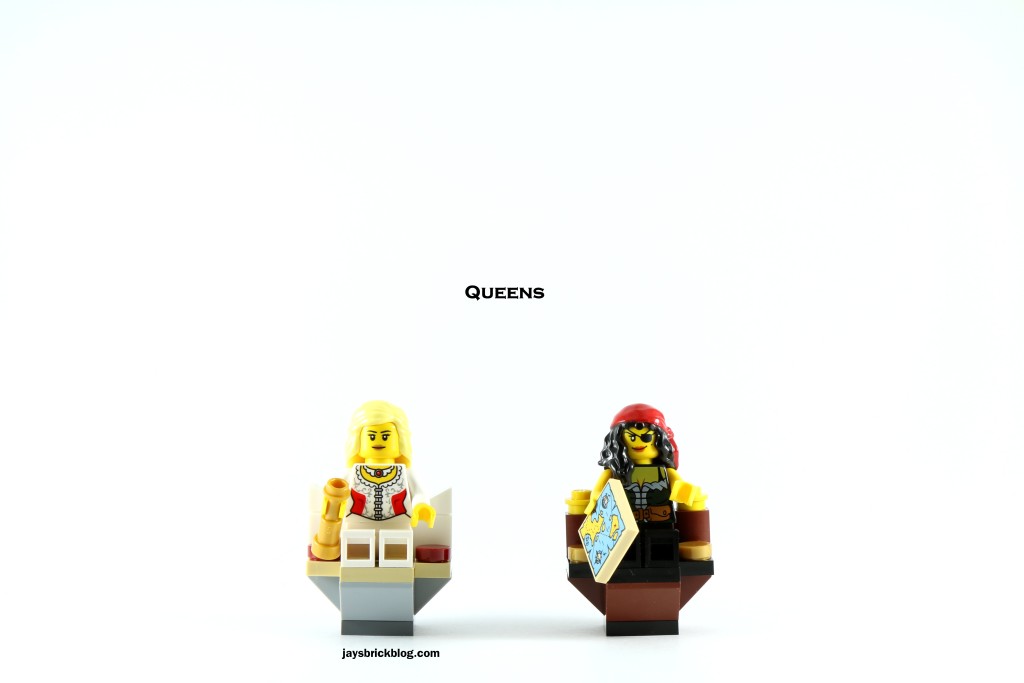 Here are the Queens, which have comfortable armchairs to elevate them as they traverse across the chessboard, terrorising the other pieces.

Both Queens use existing torsos so there’s nothing particularly special about them. The Pirate Queen has a slightly different torso than her appearance in 70411 Treasure Island but still sports the same great face and hairpiece.

The Queens are pretty decent although the Bluecoat Queen looks a lot more like a Castle damsel in distress than a proper Queen. It would’ve been nice if LEGO made her slightly more intimidating and fierce – a female first officer would’ve been a much better choice, in my opinion. 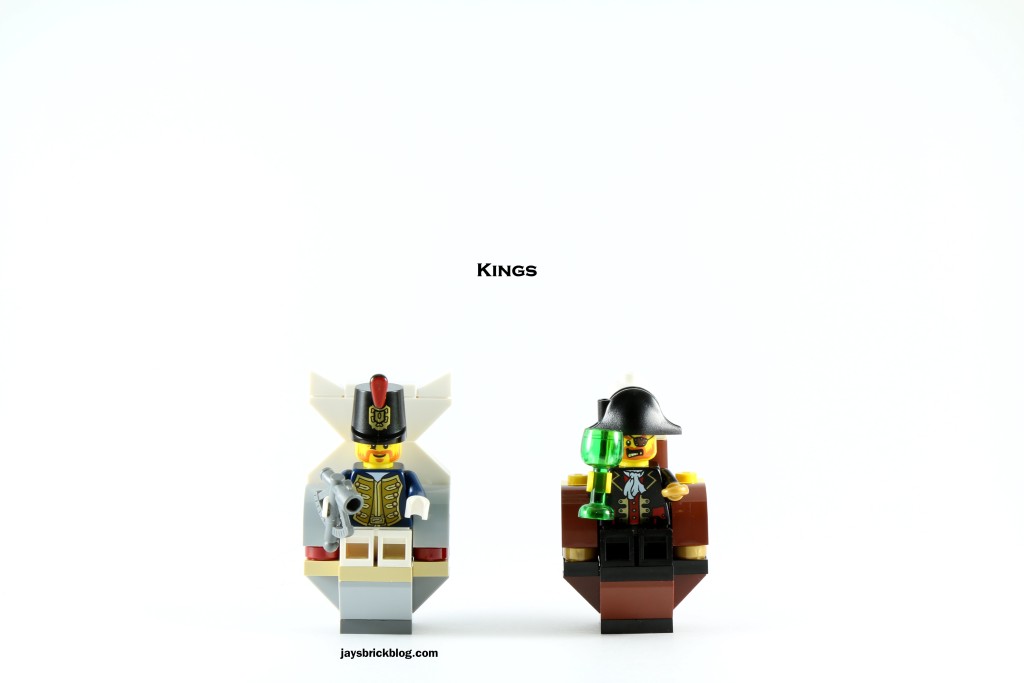 And here we have the Kings, the weakest and most important pieces on the Chessboard. On the Bluecoat side, we have an imposing Admiral and on the opposing end, a Pirate Captain. The Pirate Captain is the standout minifigure in this set due to his relatively rare torso which has only shown up in sets like the Imperial Flagship or Classic Pirate Set. 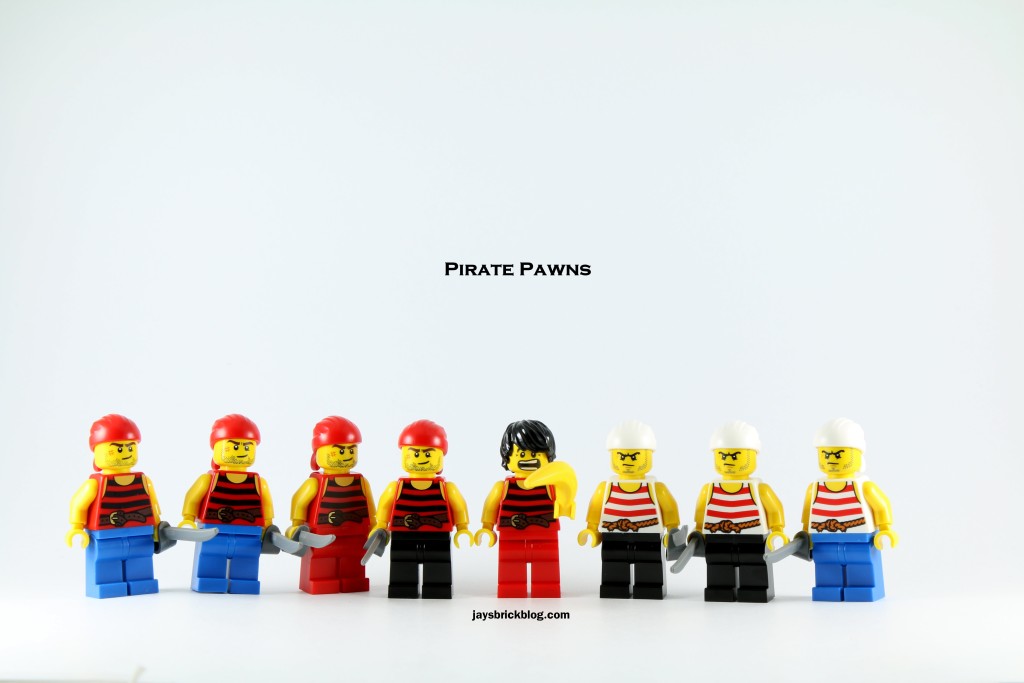 The Pawns are the heart and soul of the set, with 8 on each side. The Pirate Pawns are a motley crew of scallywags and brigands with two variations of torsos, faces and bandanas which is great for army building. There’s one standout minifigure on each side, which is a little bit of a joke character – on the Pirates side we have a dude wielding a banana which is obviously more deadly than a cutlass. 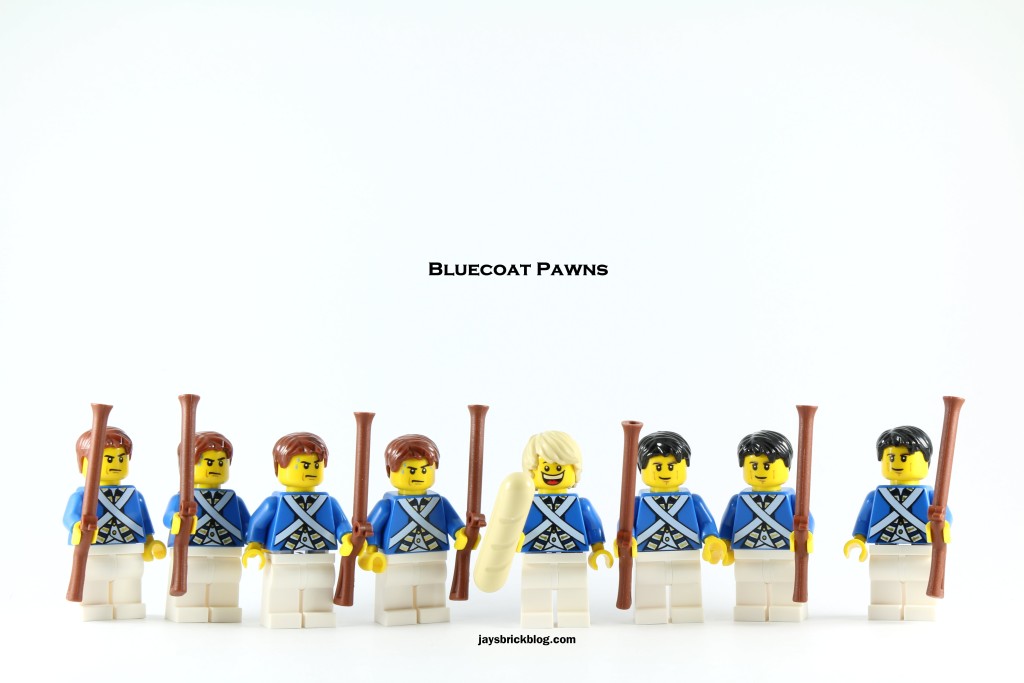 The Bluecoat Soldiers are slightly more homogeneous, with the same uniform torsos for each Pawn. This isn’t necessary a bad thing, since you’d expect the uniforms to be umm, uniform across the board. The impressive number of Bluecoat soldiers is a dream for any Pirates fan and is hands down the highlight of this set.

The joke character on the Bluecoats side is a cheerful chap wielding a deadly baguette of doom. As the saying goes, “always bring a baguette to a gunfight“. 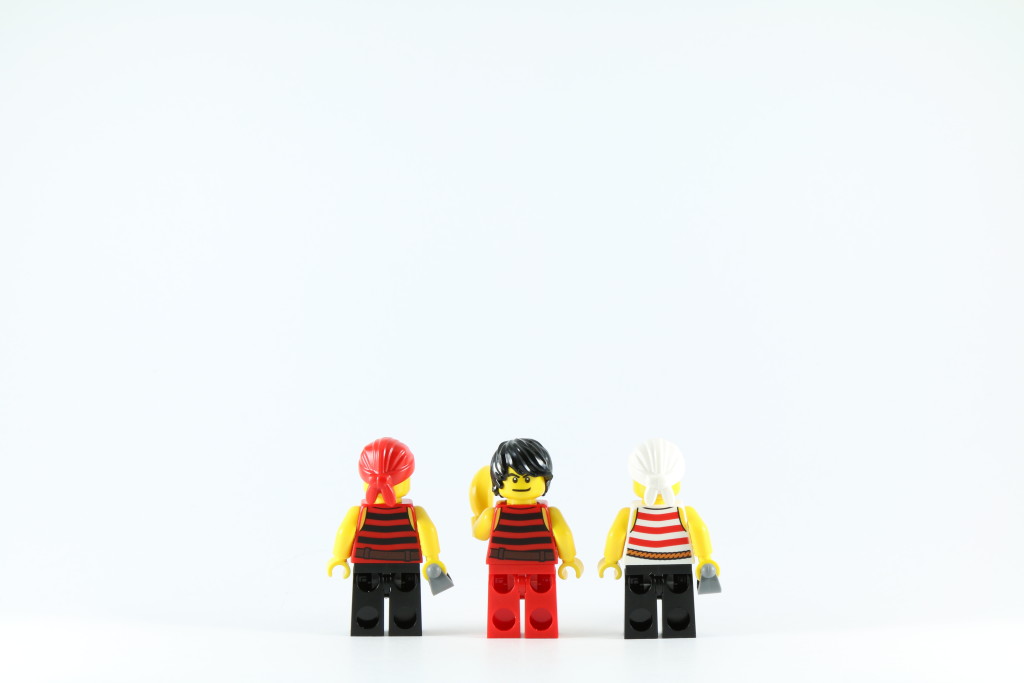 Both joke characters are the only pawns with alternate faces and all minifigures in this set have back printing. 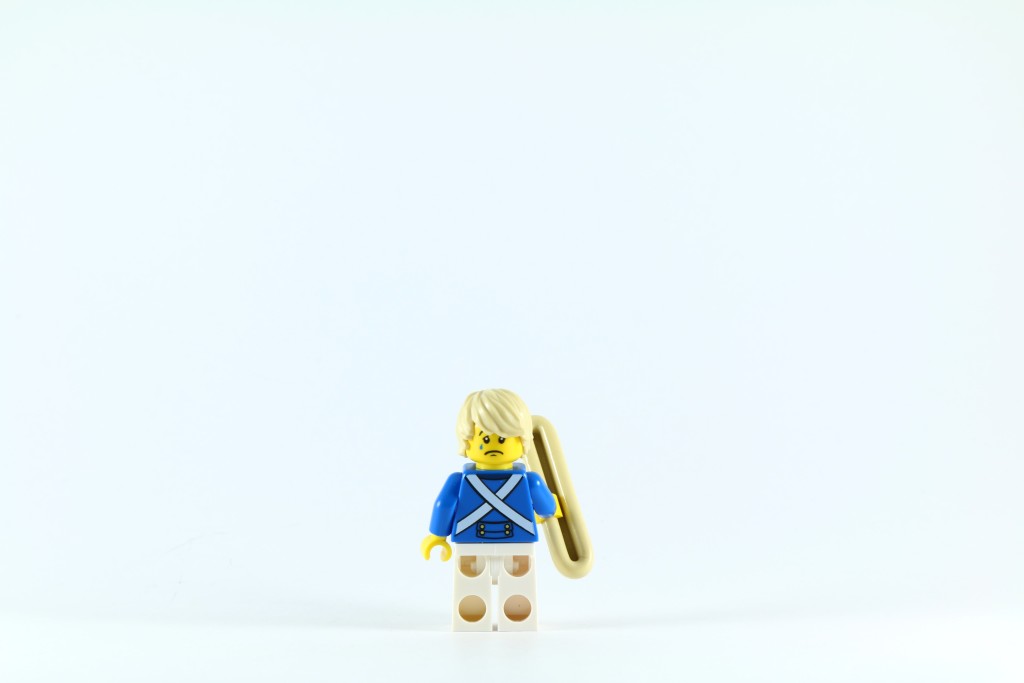 Poor baguette soldier probably got yelled at by the Admiral for his poor choice of bread or weaponry. 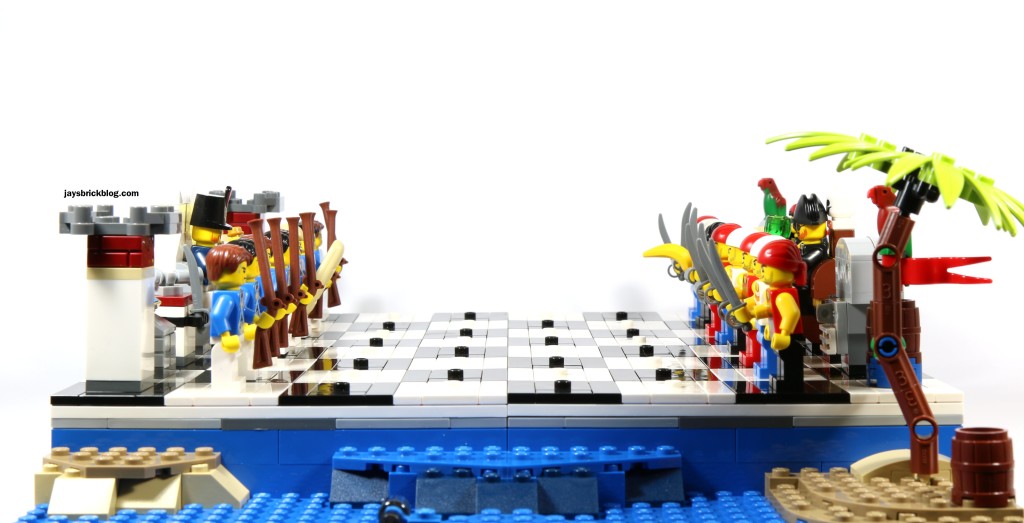 Being my first LEGO Chess set, I was actually quite impressed with the actual Chess components. Never mind that I haven’t played a game of Chess in years, just laying out the board and lining up the Bluecoats against the Pirates was very fun and also had the added bonus of looking remarkable on display. 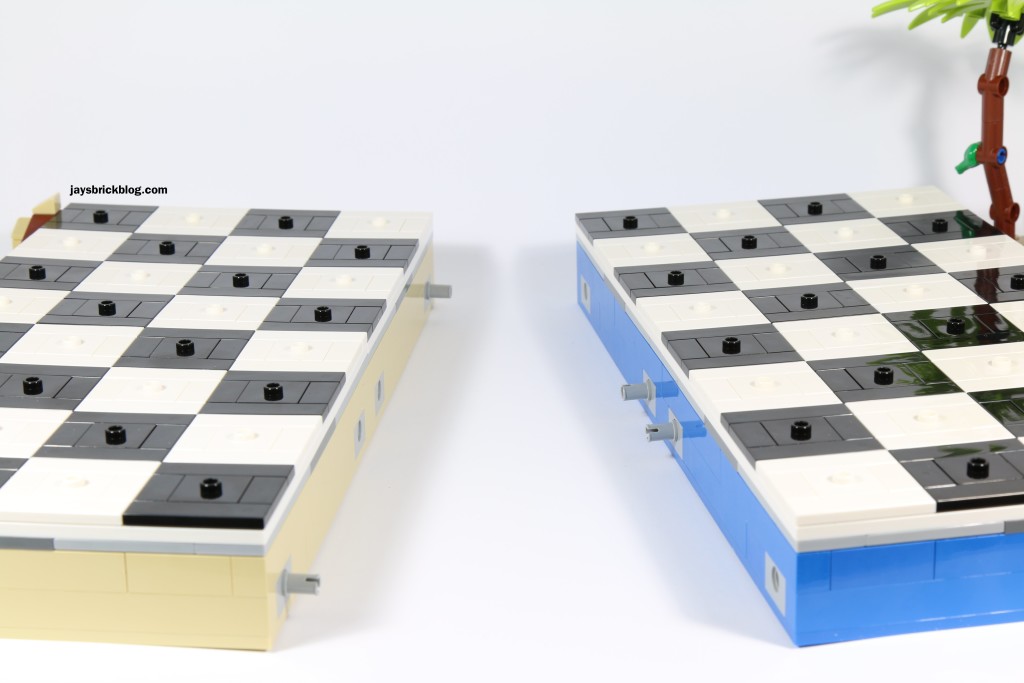 The Chess set has a few clever secrets build into it, meaning there’s more than meets the eye. You can separate the Chess board into 4 components – the board itself splits into half and you can also detach the side scenes. 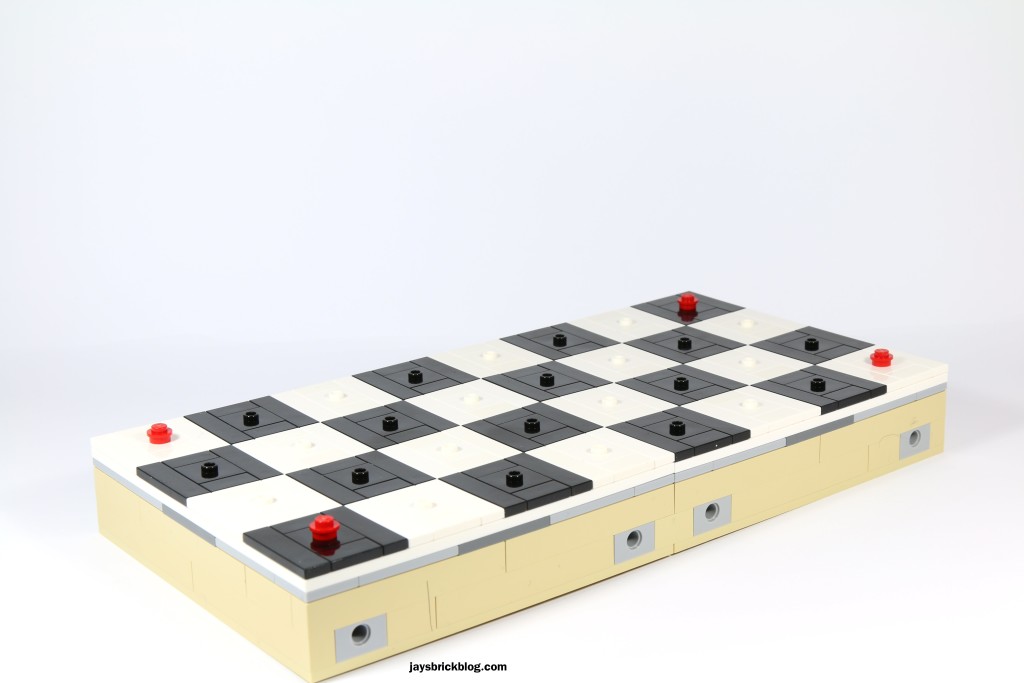 I thought it was pretty clever of LEGO to incorporate a storage solution for the Chess set, seeing as its quite large and takes up quite a bit of space. Using simple red 1 x 1 studs, each component can be stacked on top of each other. 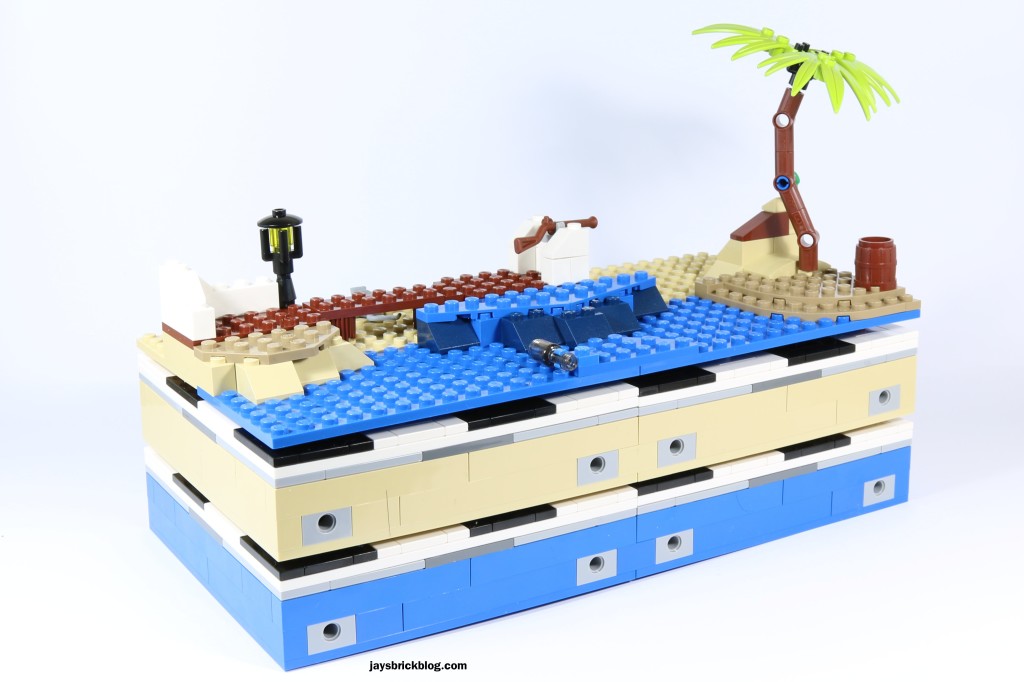 Here’s the end result of the LEGO Pirates Chess board when you stack all the components together. It drastically reduces the surface area to make for easy storage or convenient display. As you can see on the top layer, both side scenes can be combined together to create a beachside scene. 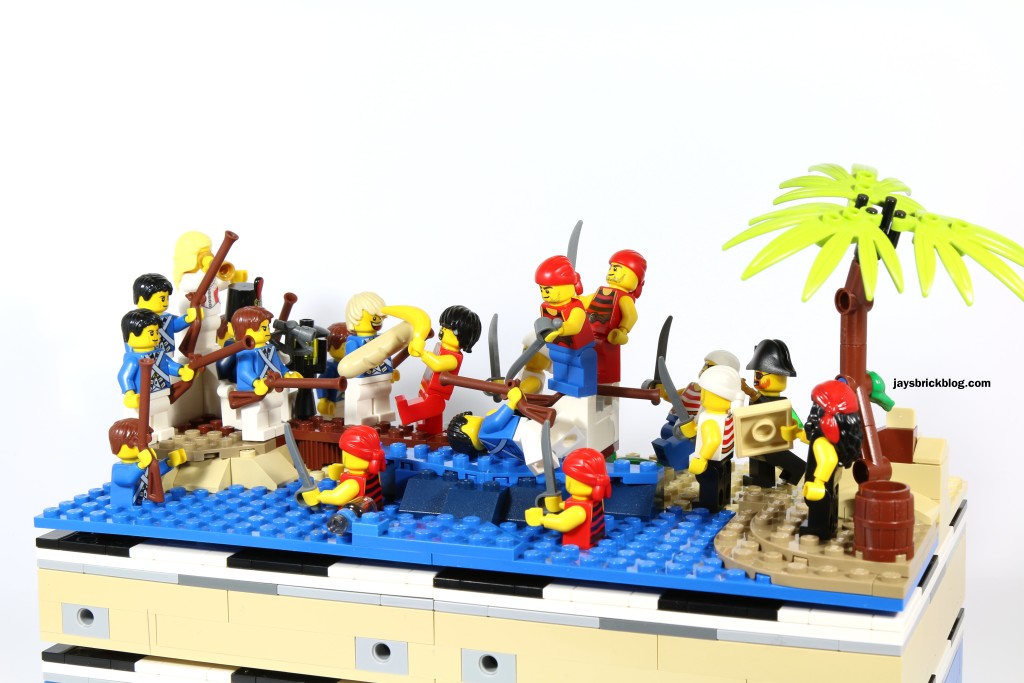 You have two options when it comes to what you can do with your LEGO Chess Set when you want to keep it away – Display or Storage Mode. I made that up by the way, but it’s official now that I’ve written it on the blog.

With Display Mode, you can use the top layer to create your very own Pirate battle diorama and stuff it with all the minifigures included in the set. It’s a tight fit but you should be able to fit all the minifigures in and design some really chaotic battle scenes between the Bluecoats and the daring Pirates. 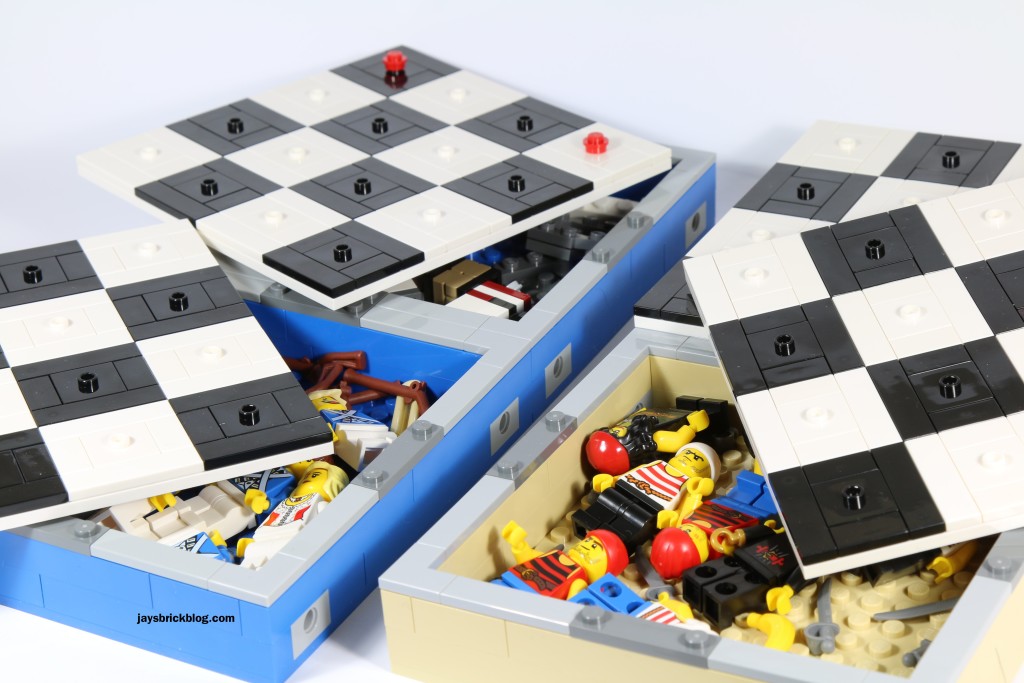 If you want to activate Storage Mode, the chess board actually opens up to reveal one of the niftiest secrets of this set – ample storage space for all the chess pieces! Some of the larger Chess pieces like the King & Queen seats and Knights need to be disassembled slightly so that they fit under the boards but there was more than enough space to go around.

I was really blown away by this clever feature as its not immediately apparent when you first lay eyes on the set.

The versatility of Storage vs Display is a huge plus in my books as it allows this set to seamlessly flit between a display piece or a LEGO board game. 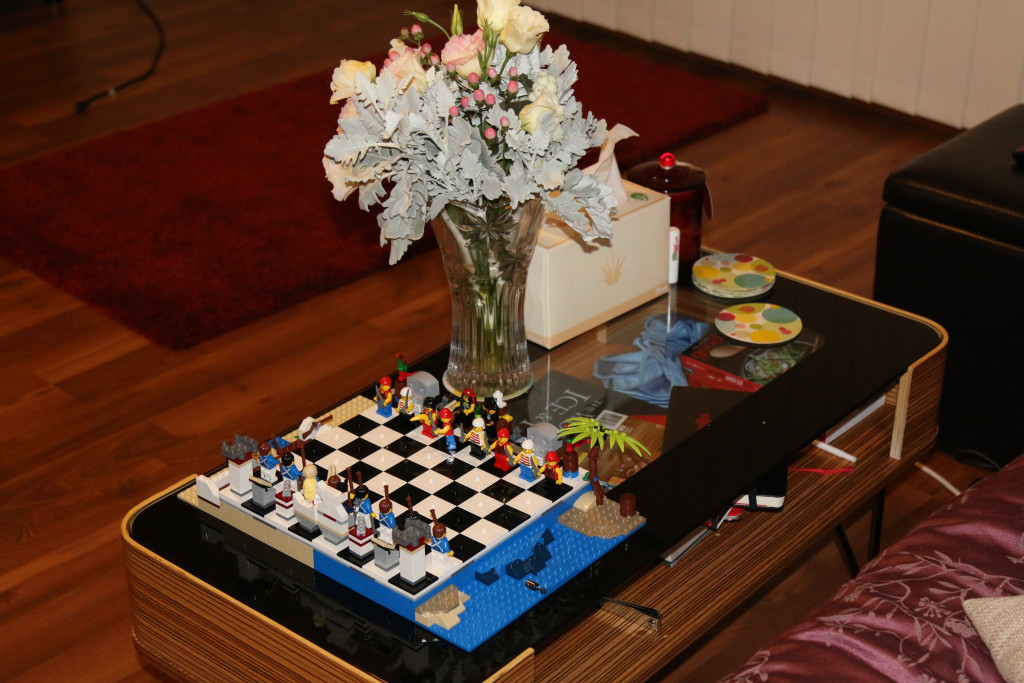 Speaking of display, I think that the LEGO Chess set looks quite good on display. Here’s the Chess set on my coffee table – as you can see, because its a chess set, it has the virtue of not looking so much like a toy. This means it will probably fit into your interior design in areas where a LEGO play set might normally look out of place. 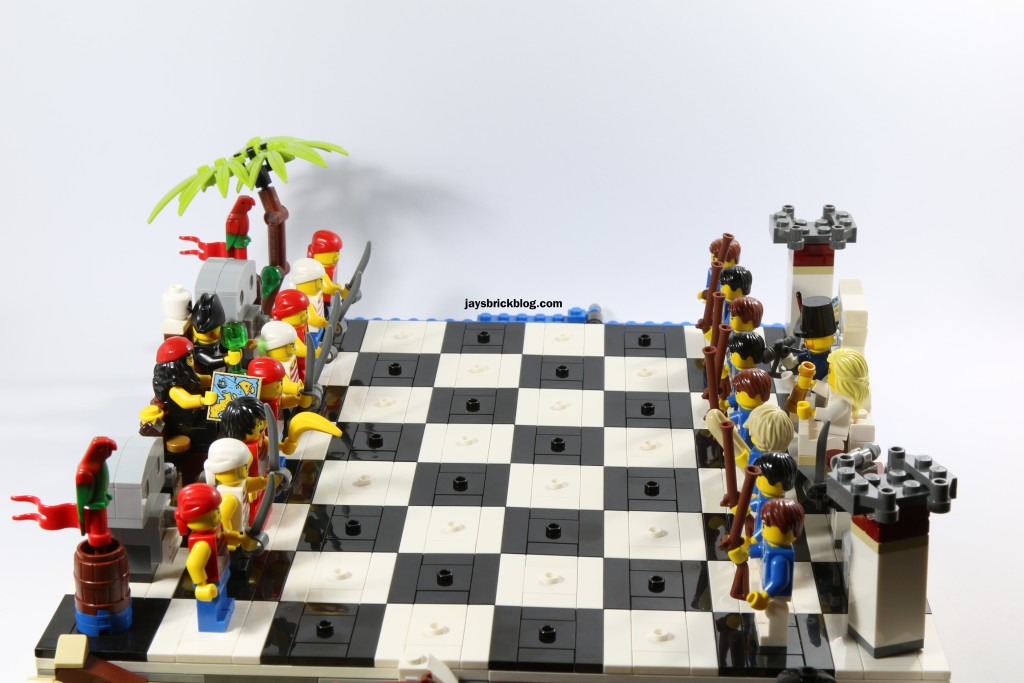 Final thoughts: I’d like to think that my gamble on the LEGO Pirates Chess set paid off in spades. At AU$80, the Pirates chess set has a whopping amount of value, and that’s not just attributed to the 20 minifigures you receive in this set but also the useful parts and elements such as black and white tiles as well as plenty of tan and blue bricks.

If you’re into novelty LEGO sets, the Pirates Chess set will more than satisfy any LEGO fan – if you’re a Pirates fan it goes without saying that you should prioritise this over all the other sets in the wave. If you were to only buy this for the minifigures, it works out to about AU$4 per minifigure, which is pretty decent value. The extra 800 pieces are a nice little bonus.

The Pirates Chess set is one of those rare LEGO sets that appeals to individuals of all ages and stages of life. If you’re a parent with young kids, I think it would be so fun to teach your kids how to play Chess on this set – the very fact that you can play with your Chess set after your dad checkmates you for the umpteenth time is a huge win.

For older LEGO fans, I reckon the nostalgia of Pirates will be more than enough to sway you to drop the money for this set. In case that’s not enough, the LEGO Pirates Chess set makes a very strong case for being a visual centerpiece in your study or living room.

I can honestly say that I have no major complaints about this set – the lack of monkeys is deeply concerning, but that criticism can be applied to all the new Pirates sets. This has got to be one of the best surprises of 2015 and is one of my favourite buys of the year.

My only real concern is the availability of this set, as its currently sold out on the Australian LEGO.com and is backordered on the American site as well. I really hope that LEGO restocks this online as I am unsure if sets like this will ever make it to retail.

If you’re in Australia, hopefully history repeats itself, as Myer carried the Kingdoms Chess Set in 2012. If you happen to live in a country with an official LEGO store, you could probably pick up your chess set there.

For more LEGO set reviews, be sure to check out the Review Hub! Be sure to also check out all my other Pirates 2015 reviews.