The Chinese Lunar New Year begins in a few days (16 February) away and marks the most important cultural holiday for the Chinese diaspora across the world.

In 2018, LEGO continues its new-ish tradition of producing special Lunar New Year promotional sets with 40235 Year of the Dog, to commemorate this year’s Chinese Zodiac Animal.

We’re lucky enough to be able to get this promotional set early in Australia. To get set 40235 in Australia, all you have to do is spend $88 (a lucky number in Chinese culture, signifying double prosperity) in LEGO sets at Myer to get a free Year of the Dog set. With numerous sales, and all the shiny new LEGO sets on the shelves, it shouldn’t be too hard to get this promo set.

This year, the promotional set will be available across the world and not just in Asia/Asia Pacific.

The US will get it from 16 – 28 February with purchases of US$88 or more at all LEGO Brand retail stores, and probably online on the LEGO shop as well. This promotion is also likely to be running in the UK and EU as well.

Update: The promotion is now live on the US and UK LEGO Store.

Really awesome of LEGO to enlarge the distribution this year outside of Asian countries. 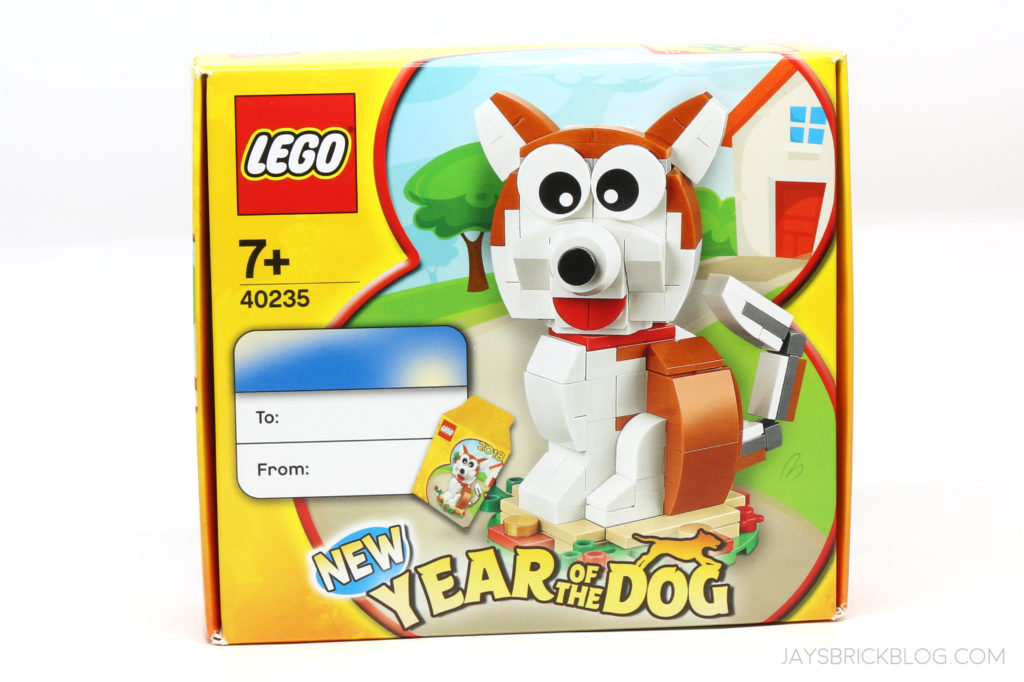 In the recent years, LEGO (like most other corporations) have employed a “Look East” policy, casting their eyes towards emerging and developed markets in Asia as traditional Western markets became more saturated and growth slowed to a crawl in developed market.

LEGO is after all a toy company, and it makes obvious sense for them to focus on parts of the world underpinned with strong economic growth and most importantly, booming birth rates.

In addition to opening a massive factory in China and an aggressive blitz of retail expansion with LEGO Certified Stores, LEGO have also rolled out a number special promos exclusively targeted at the Asian market with special seasonal sets to mark the Lunar New Year.

This is the 4th promo set to celebrate the Lunar New Year (5th if you count the Year of the Snake), and an adorable dog. Like previous LEGO Chinese New Year Zodiac Animals, they all come in a special box, with illustrated art to celebrate the corresponding year’s Chinese Zodiac Sign.

There is a small box where you can write the name of the giftee and gifter, as it’s designed to be a fun gift for kids. 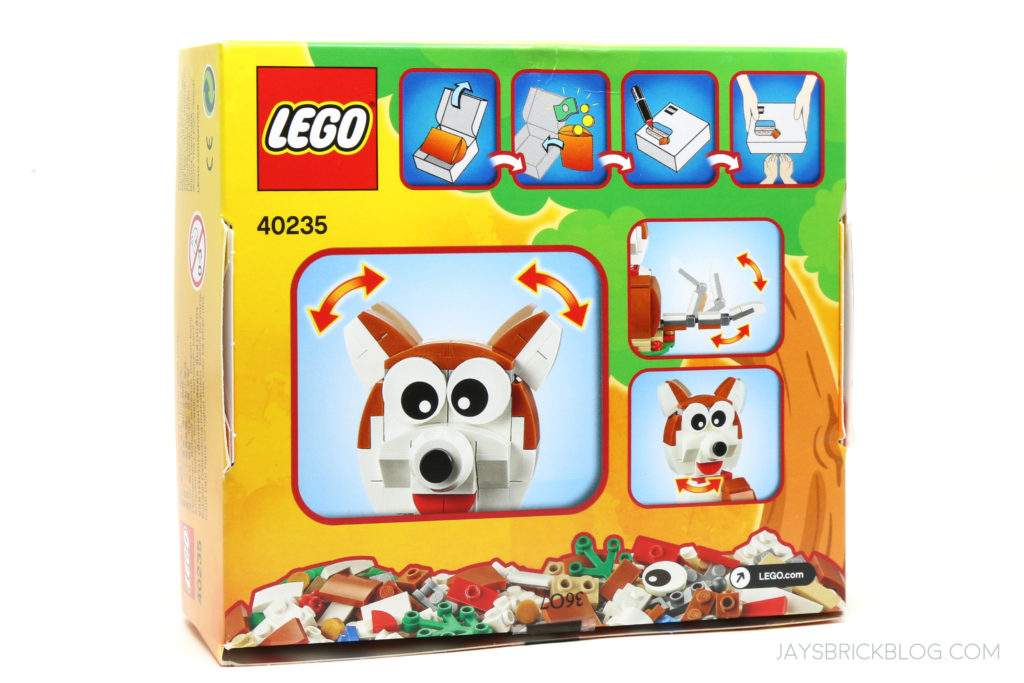 On the back, we have some diagrams showing off the articulation of the dog, as well as some instructions on how to properly use the traditional “red packet” in tandem with the set as a festive gift. More on the red packets later. 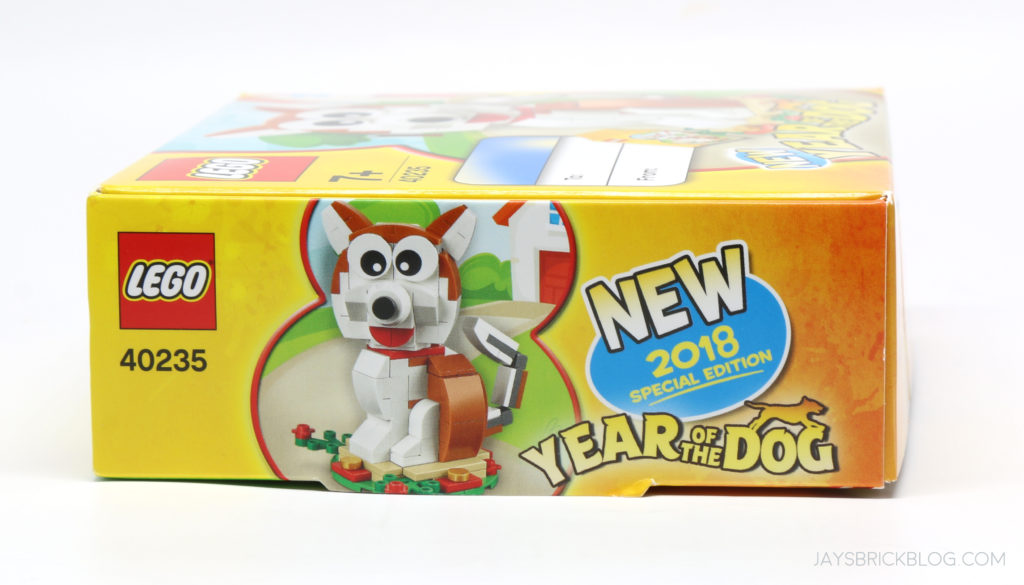 On the side, there are some more illustrations. 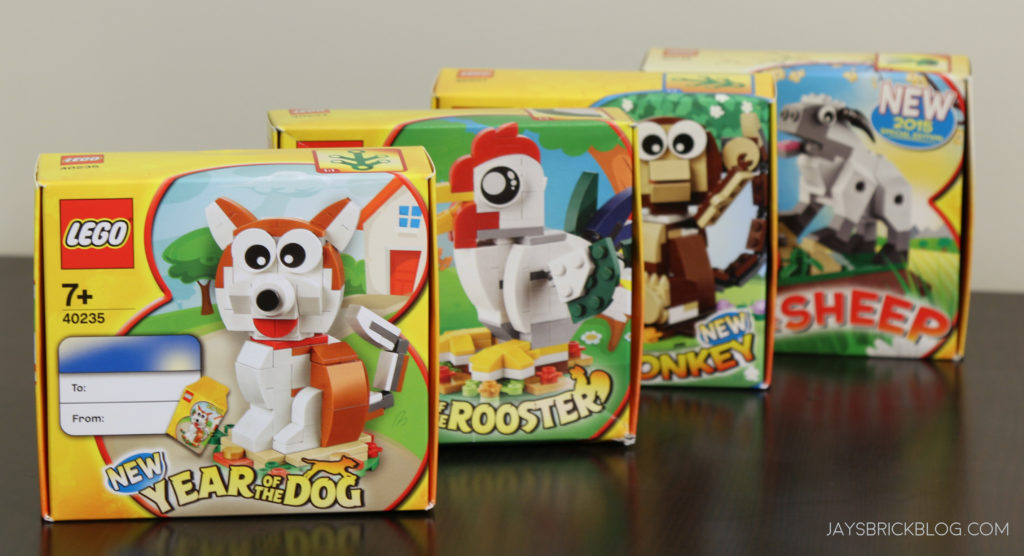 I don’t really count the Year of the Snake as part of this series as that set is a lot bigger, and doesn’t quite fit the promotional nature of this series. As you can see above, LEGO have kept to the same style for all the boxes. Four down and 8 more to go!

This theme of brick-built LEGO Lunar New Year Animals might just prove to be the most difficult to collect as you’ll have to wait 12 years to get them all. 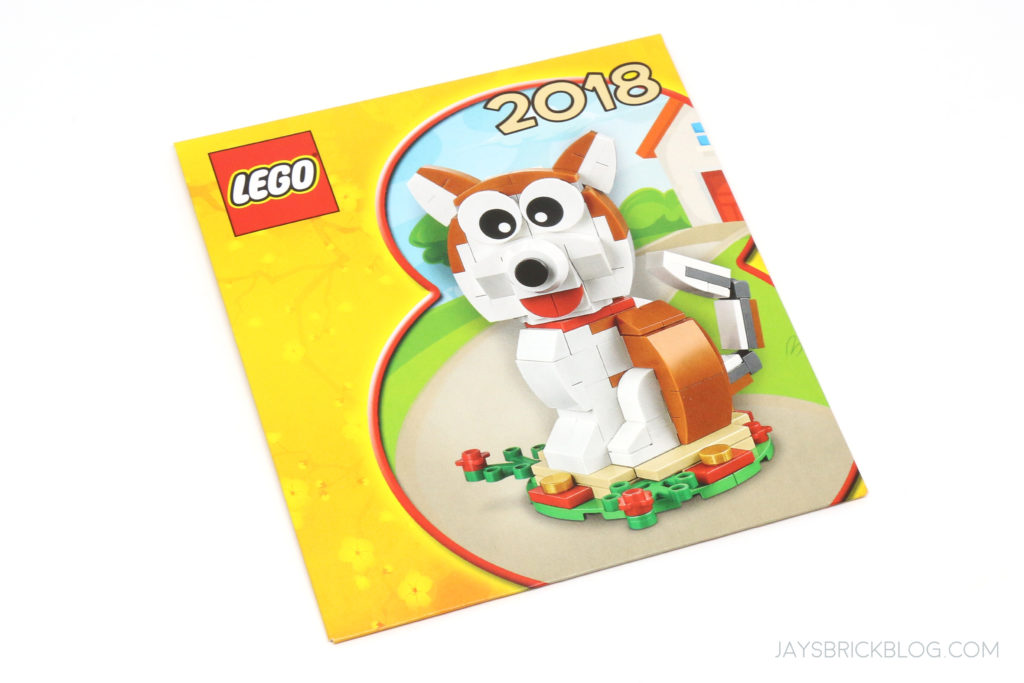 So, to mark the Chinese New Year, you also get a commemorate “red packet” or red envelope or hóngbāo. These are a staple of every Chinese New Year celebration, and something kids (and unmarried individuals) look forward to every year.

Married couples give these out to kids as a symbol of good fortune and they’re customarily filled with money. As a kid, we’d look forward to Chinese New Year as it usually meant getting a ton of spending money.

Ever promo set has exclusive “red packet” which is really yellow, with the set and corresponding year printed on it. I think it’s really cool of LEGO to do this, and with the wider global release of this set, it’s a cool way to teach and expose kids to traditions from other cultures. 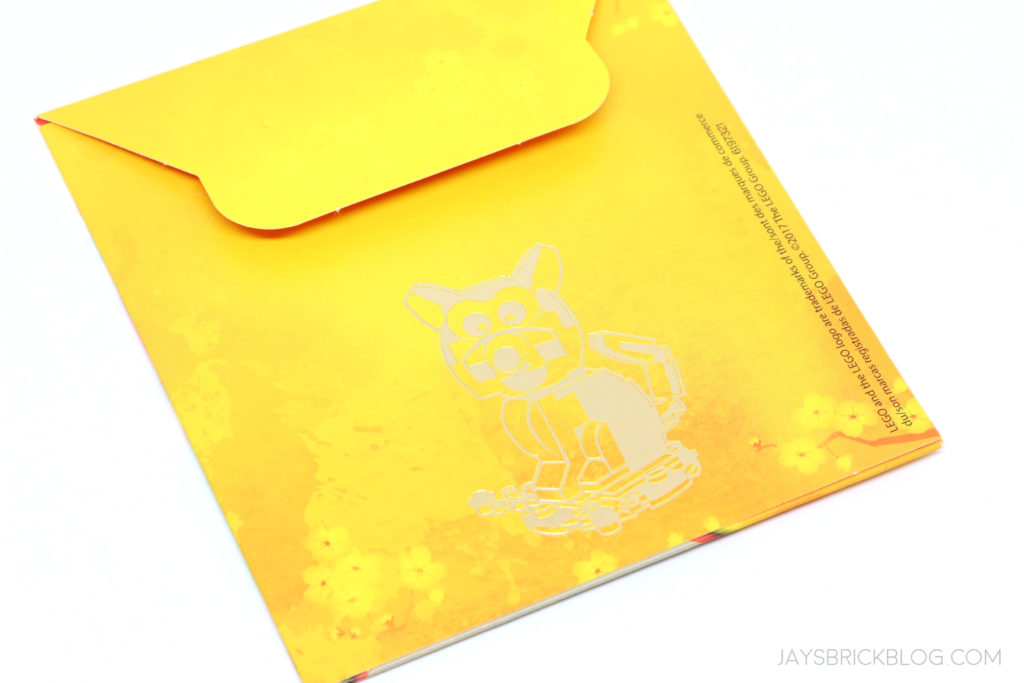 The back of the envelope has a classy shiny imprint of the dog model. 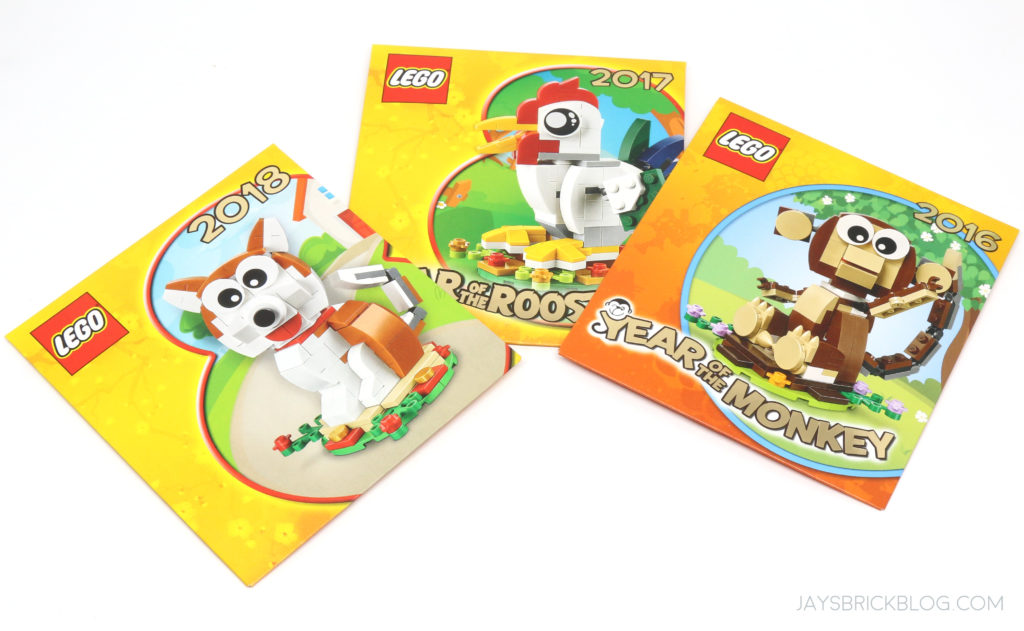 Here’s a look at the different red packets from 2016 till 2018. Didn’t know where my Year of the Sheep one but you can check it out here. 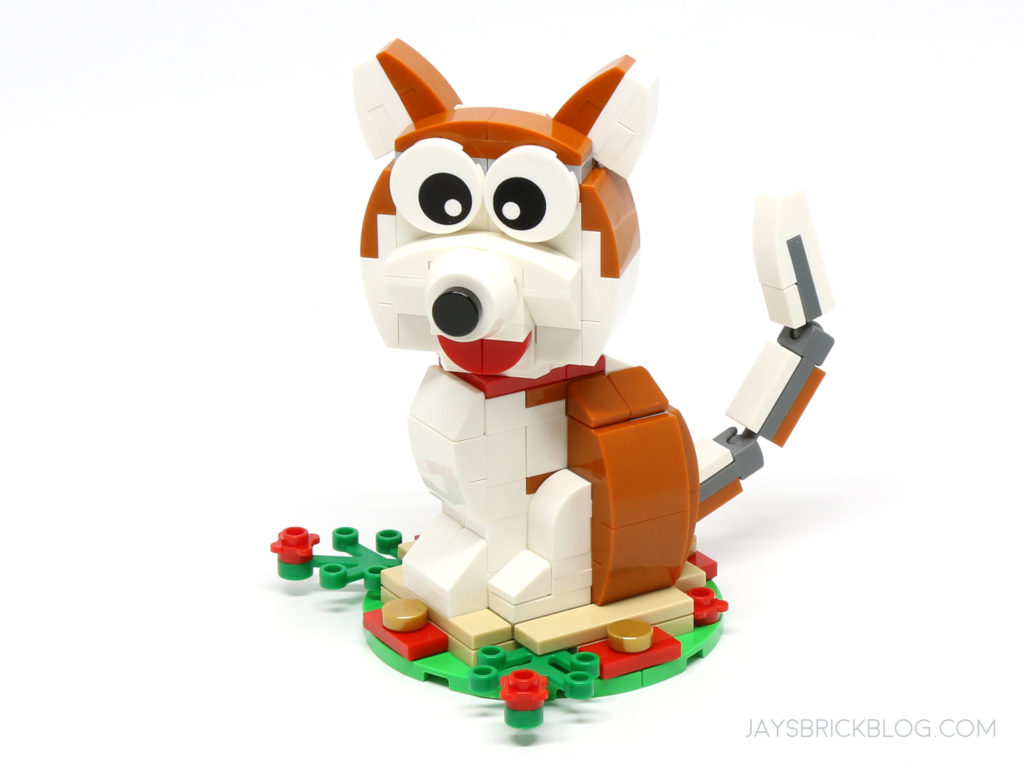 Here’s the finished product, an adorable little puppy with the theme’s signature big Googly-eyes. The dog sit atop a small base with some leaves that have red flowers on the tips. There are also four red jumper plates with pearl gold 1×1 round tiles.

The red and gold accents are nice touches as they’re colours that represent good fortune in Chinese tradition.

The dog is really cute and I really love the white and nougat colour scheme, as well as his flat nose and tongue sticking out. His head can rotate 360 degrees, he has ears that swivel and an articulated tail.

My favourite design detail of the dog is the hind legs. If you stare at the base of the model, you can see that the dog is actually sitting down! 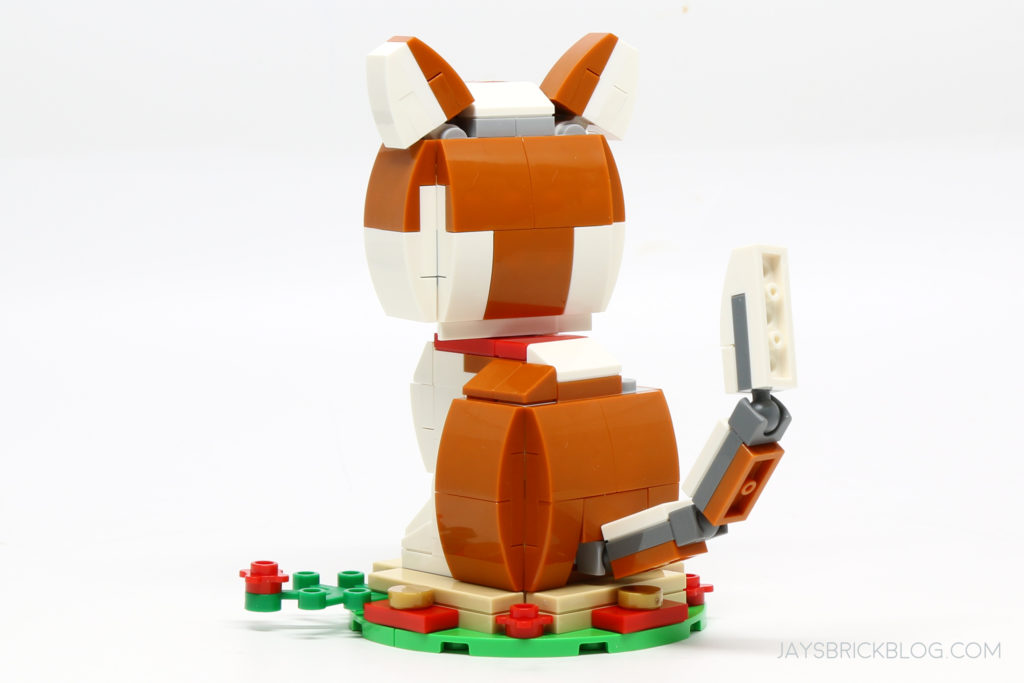 Here’s how the dog looks from behind. Really great use of curved slopes to give the dog that sweet SNOT look. 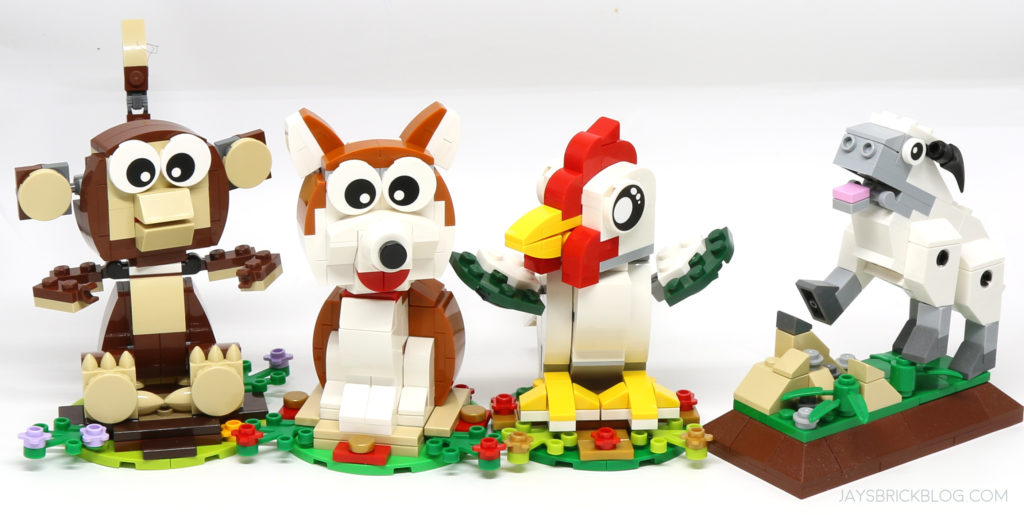 Here’s a look at the Year of the Dog, alongside the models from 2017 (Rooster), 2016 (Monkey) and 2015 (Sheep/Goat). The collection is coming along really nicely, except for maybe 2015 which looks a little dopey next to the three recent builds. 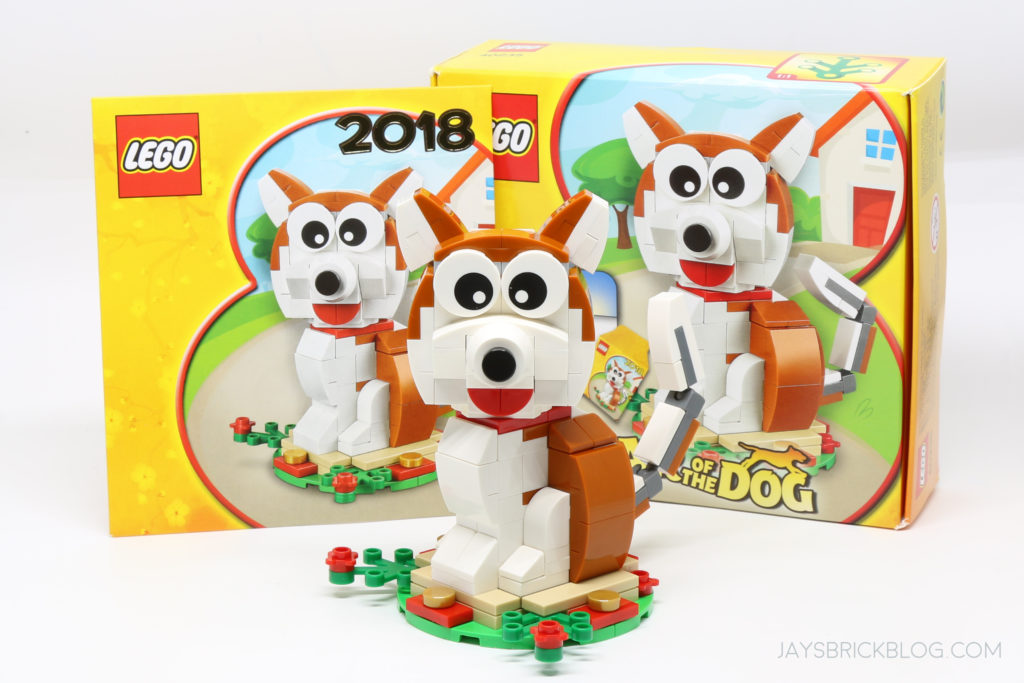 Final thoughts: I’ve been collecting the Chinese New Year Zodiac Animal sets ever since the first one, as it’s a really cool part of my culture that I feel a strong connection to. It’s become something I look forward to every year and I’m really glad that LEGO is expanding the distribution of these sets.

While it might be tricky and slightly costly to acquire the Zodiac Animals from the previous years, but the positive thing is that they’re fairly easy to recreate out of non-exclusive parts so you’ll only miss the packaging and red packets.

The model itself is cute and fits in well with the aesthetics of previous years. The small bits of articulation like the rotating head, moving ears and tail are all nice touches – it’s a basic model that’s a short, fun build that looks super adorable.

With all the new sets out at Myer, it was quite easy to hit the threshold for this set and as such, it didn’t feel like I had to alter my LEGO purchasing habits to go out of my way to pick this one up.

Highly recommend getting this to everyone as it’s one of the more substantial promotional sets that LEGO releases. If you’re from the US, Asia, UK or Europe, I’d plan my purchases around spending $88 in your local currency from the 16 of February onwards to qualify for this Gift with Purchase.

Only 8 years more to go to collect the set! I’m personally waiting patiently for my own Zodiac Animal to add to my collection. I’ll let you guess which Chinese Zodiac Animal is mine 😉

Thanks for reading this review, I hope you enjoyed it! Be sure to check out the Review Hub if you want to browse through some of my older reviews. I’ve only reviewed the 2015 Chinese New Year Set – The Year of the Sheep, so please have a read if you’d like to check out the very first set that kicked this series off.

Let me know if you’re excited for this promo set and if you’re planning to pick it up!