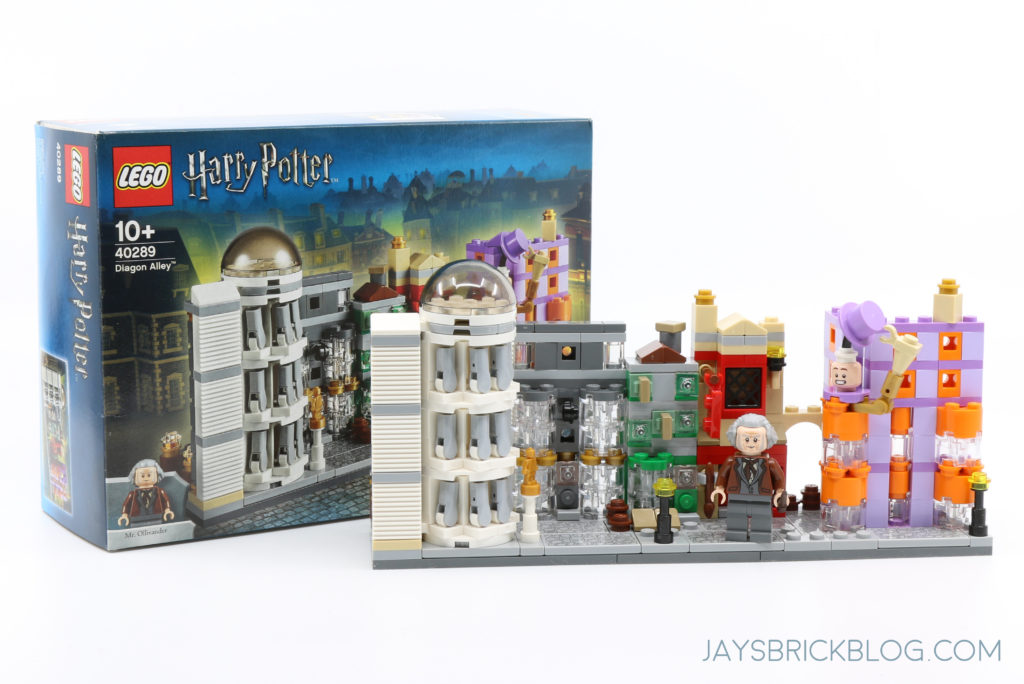 LEGO has been running a gift with purchase promotion featuring one of the most sought-after Harry Potter sets – 40289 Diagon Alley. The set miniaturises Diagon Alley, the wizarding shopping and commercial district in London to microscale and features an exclusive minifigure – Garrick Ollivander, the legendary wandmaker.

The promotion is currently running in the United Kingdom (free with any purchase above £80) and in the United States (free with purchases over US$99) and will run till the 21st of November. Unfortunately, here in Australia, the set sold out in less than a day, so tough luck if you missed out.

I was lucky enough to squeeze a copy in by buying the Winter Village Fire Station and built it yesterday, so here’s a brief review of this 374-piece set. 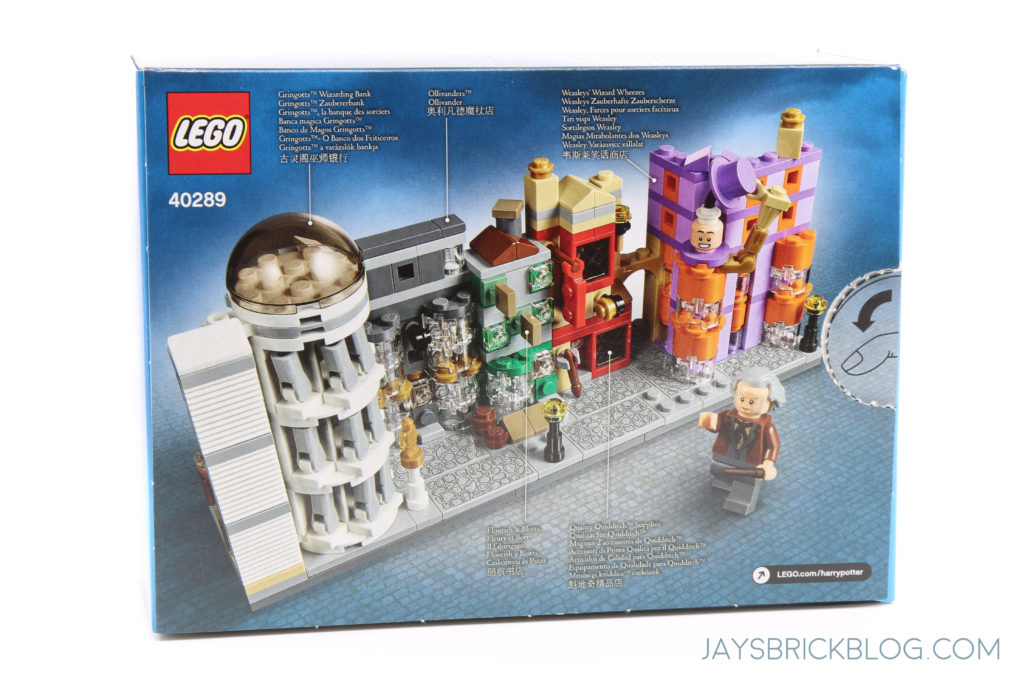 Firstly, here’s the look at the back of the box – I really like that they’ve labelled all the buildings at the back, which will be helpful for those that don’t have an encyclopedic Harry Potter knowledge.

The box itself is quite nice, with the trademark navy colour scheme of the Harry Potter and Wizarding World sets, with Ollivander’s minifigure (dubbed Mr. Ollivander) occupying a small nook in a corner.

As the set contains 374 pieces, it’s definitely one of the more substantial promotional sets, even if those 374 pieces are mostly studs and plates. 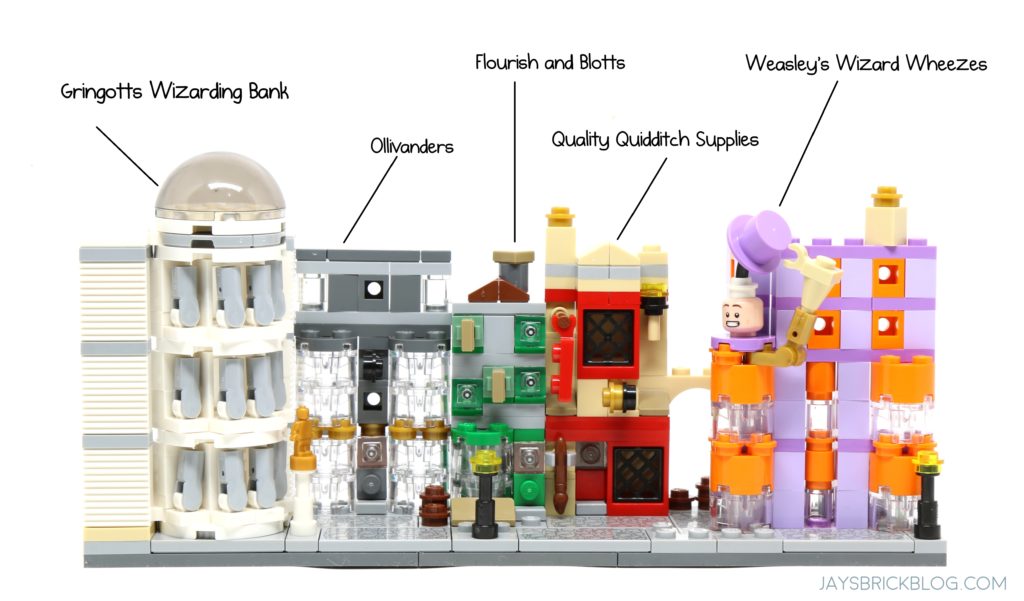 Here’s the finished model, which I’ve labelled all the buildings for easy reference. The build was rather delightful. For those of you that don’t know, I really enjoy building models and sets at a microscale level.

It took me about half an hour to put together, and I have to say that it was a very relaxing experience with a lot of variety for such a small set. There are some clever building techniques employed which I found quite surprising, and most of all, it really felt like the design team treated this set with a lot of extra love and respect.

You can tell that he or she probably had the best time designing it. Another thing I found interesting, was that this set shows you the potential of creating something beautiful out of what is essentially a bunch of random leftover parts.

Even if you missed this set, it shouldn’t be too difficult recreating it with spare parts, save for the exclusive elements. 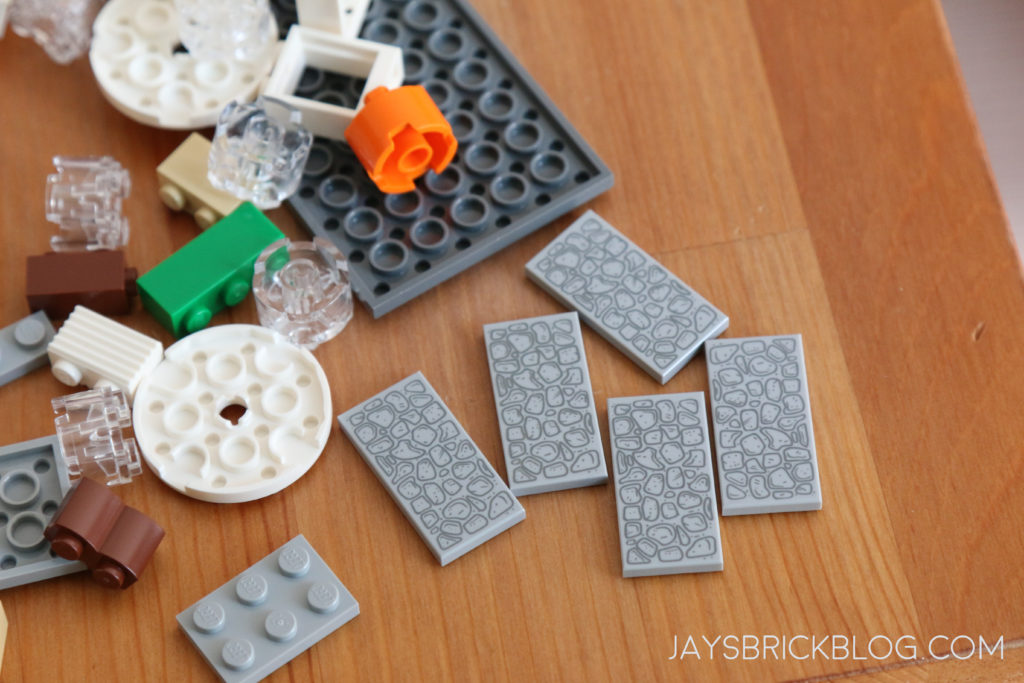 Speaking of elements, I was very happy to see these beautiful new printed cobblestone tiles included in the set. It’s a fantastic way to debut a new element, seeing as how Diagon Alley is known for its cobblestone alleys.

I expect to see a lot more of these tiles in 2019 – perhaps in the new modular building. 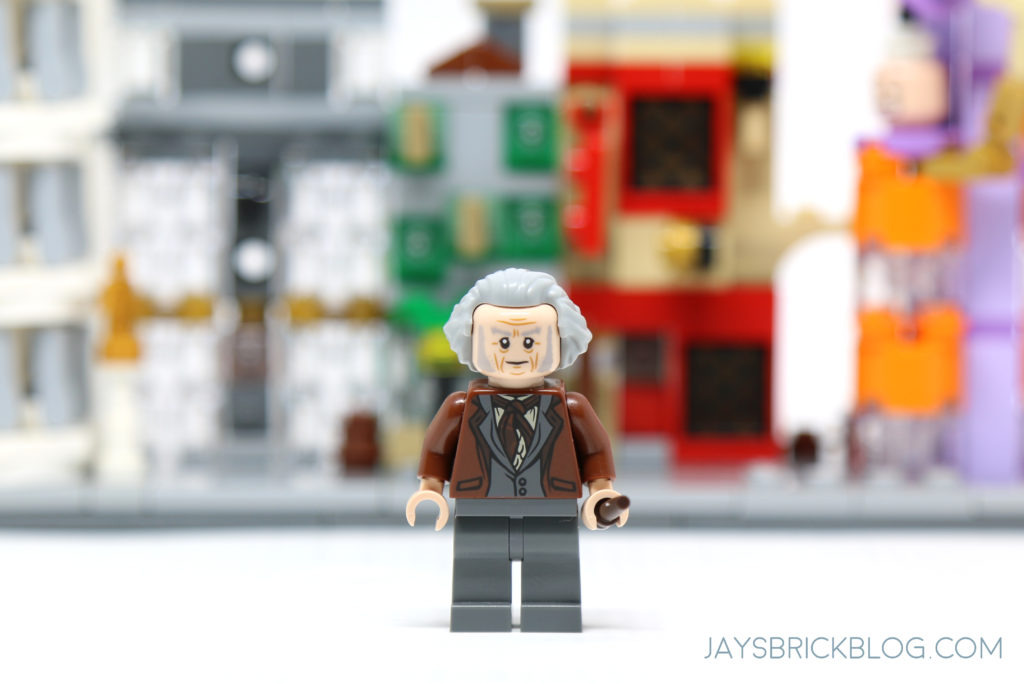 This is the Garrick Ollivander minifigure. Mr. Ollivander is perhaps responsible for creating nearly every single wand that’s used in Great Britain. A trip to Ollivander’s Wand Shop is a rite of passage for new Hogwarts student to get “fitted’ with a wand that they’ll use for the rest of their lives.

Ollivander’s wizened look is captured quite well, with his face etched with lines as well as his “mutton chops” beard. He’s dressed in a brown jacket, over a grey suit with a brown knotted scarf-tie thingy, and has grey trousers. He wields a brown wand – Hornbeam, 12¾”, with a core of dragon heartstring. 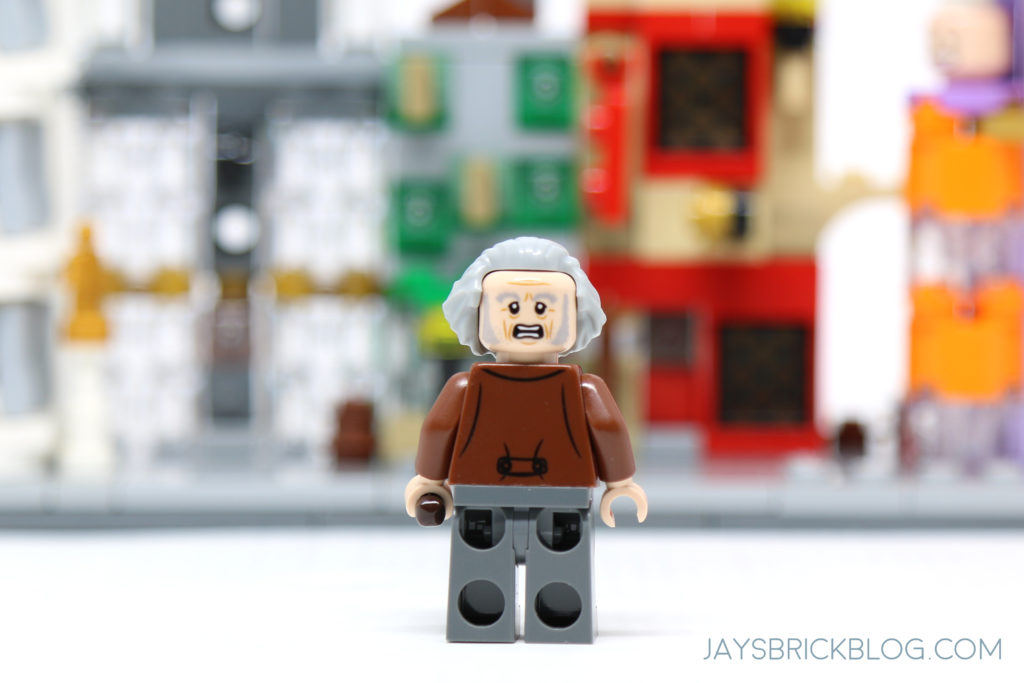 Here’s a look at his back printing, and his alternate face, which is one of distress. Perfect if you want to re-enact his kidnapping by Voldemort’s Death Eaters. 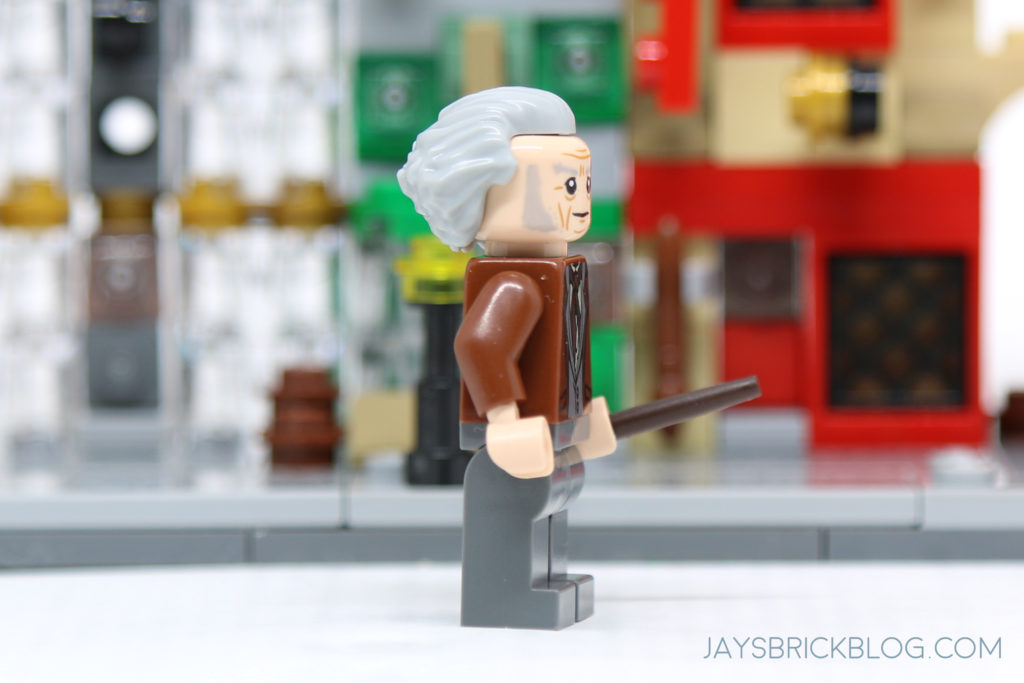 His hairpiece is also very fitting – great with a receding hairline and plenty of volume in the back, also known as the Doc Brown hairpiece.

For an exclusive minifigure, Ollivander is great due to his legendary status in the Wizarding World and is a must-have in any LEGO Potterhead’s collection. 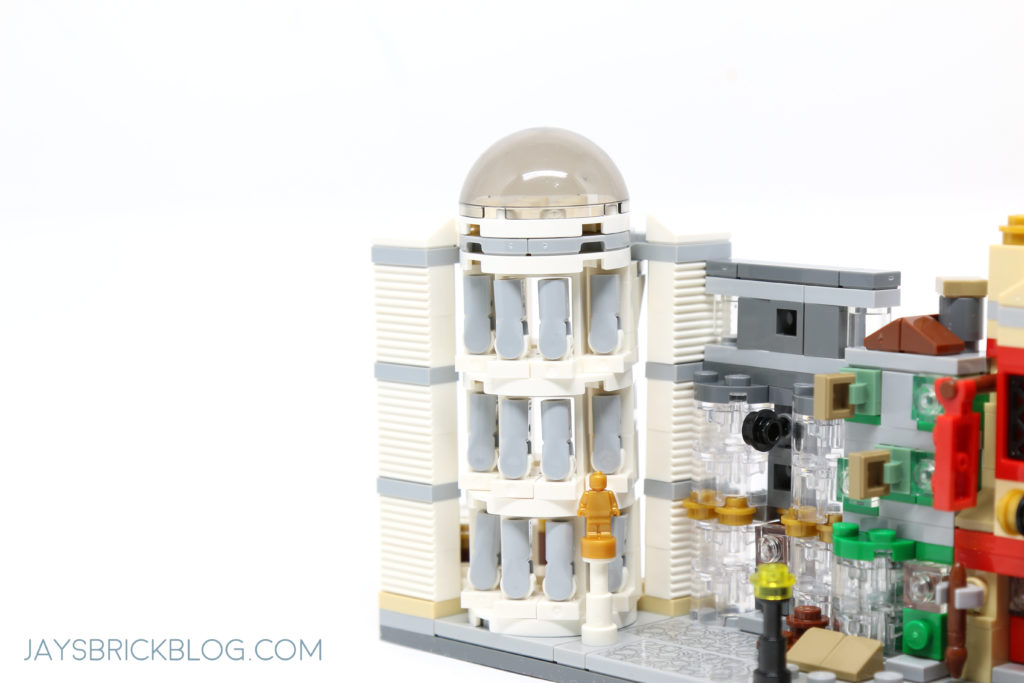 First up we have Gringotts Wizarding Bank, which is run by goblins. The structure’s facade makes clever use of parts to create its columns and also textures on the wall. As a clean white building, it stands out in a clinical fashion from some of the other hodge-podge buildings on Diagon Alley.

Out the front, there’s even a golden microfigure to represent the golden goblin statue. 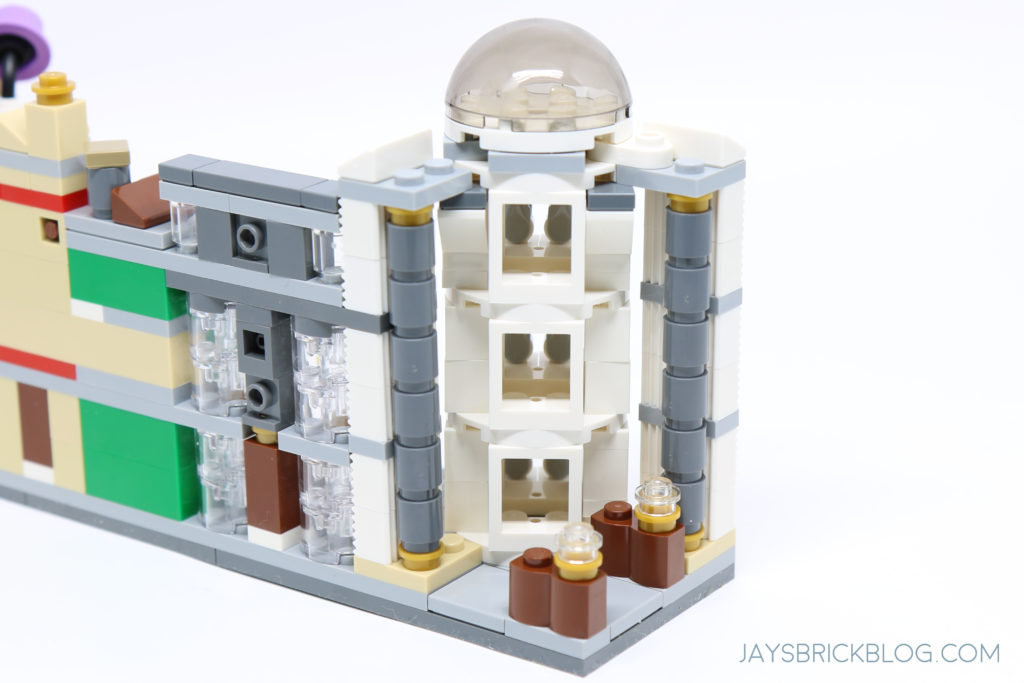 Gringotts even has an interior, with some wooden tables for the tellers. 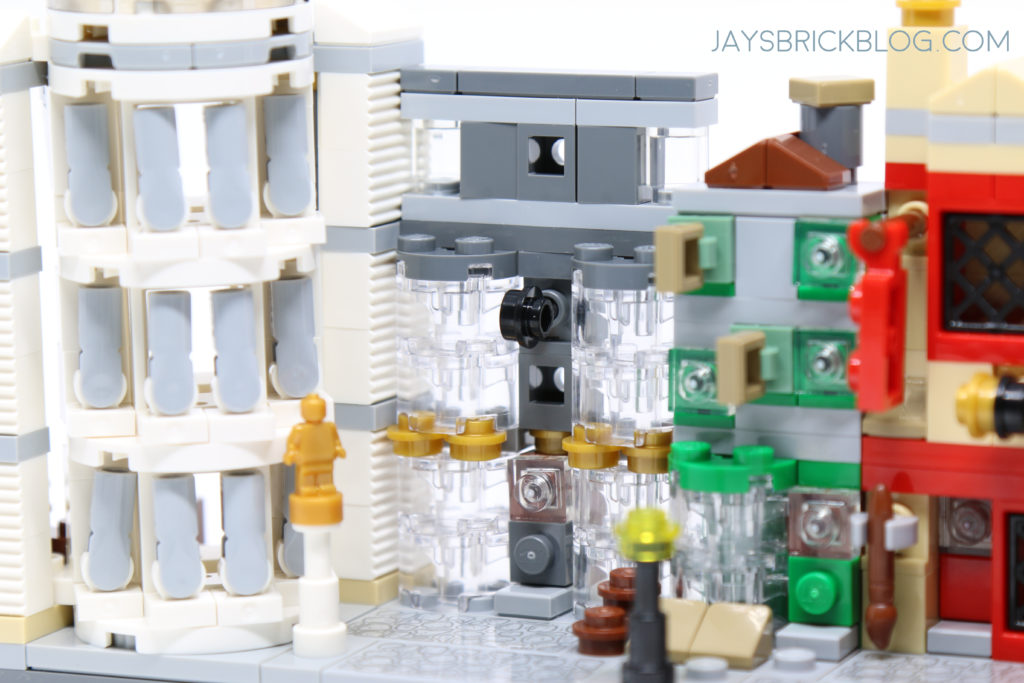 Ollivander’s is nestled in between Gringotts and Flourish and Blotts. Its facade is quite plain, with large transparent windows and a drab grey exterior. 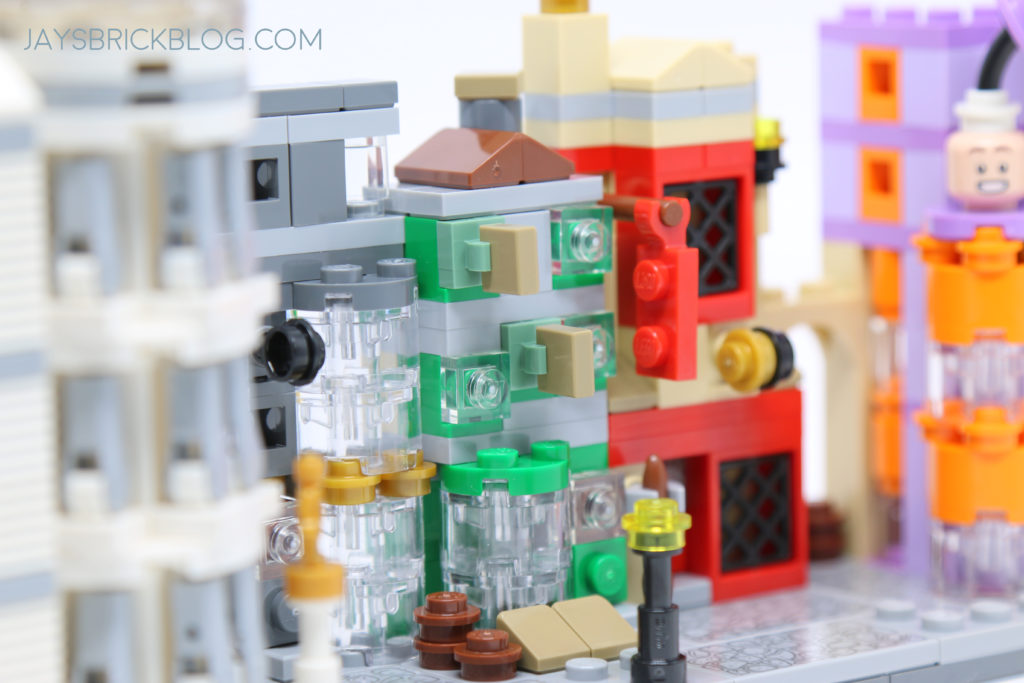 Next to it is Flourish & Blotts, the wizarding book store that all Hogwarts students go to for their magical textbooks. The facade is quite narrow, but packs a healthy bit of detail with tiles fastened to clips and great use of colour. I love how the sand green, green, grey and transparent elements all work together. 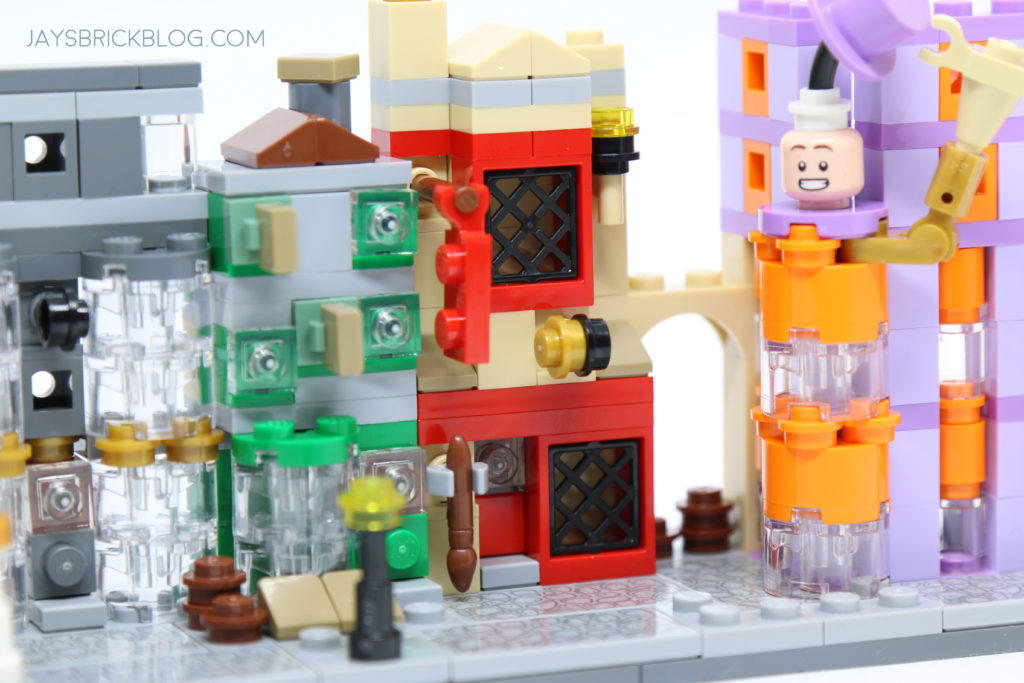 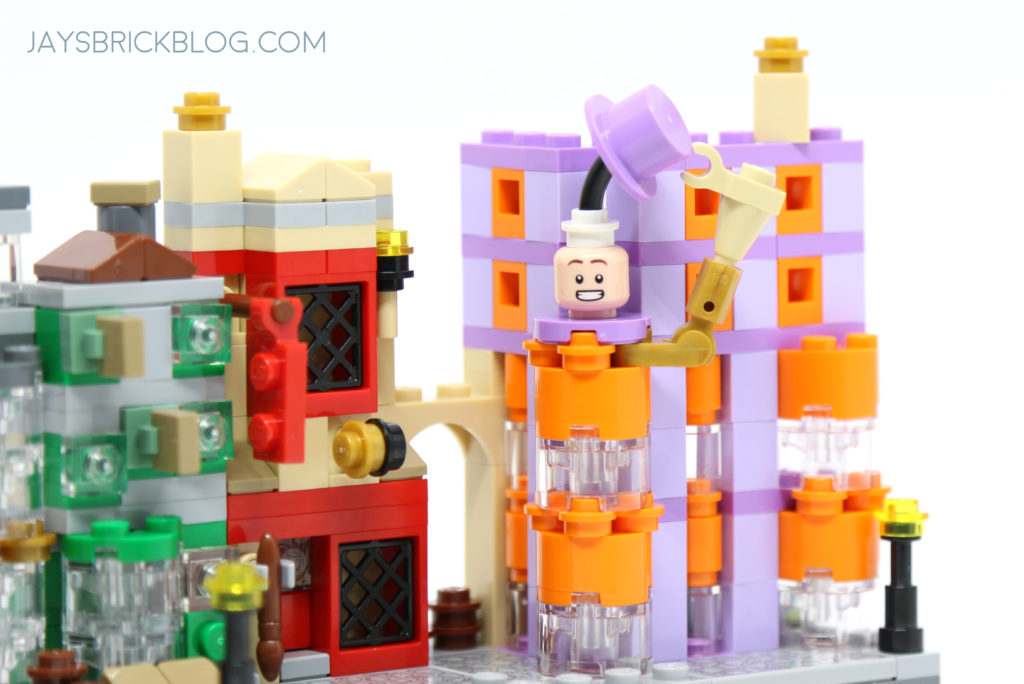 And last but not least, we have the most garish building – Weasleys Wizard Wheezes, run by the twin Weasley brothers, Fred & George which sells a massive range of magical practical jokes an gizmos.

If the bright orange and lavender bricks don’t catch your eyes, the massive face, with a mechanical arm tipping a purple top-hat surely will. This is my favourite building on the entire street, most especially because of how well the designer brought the head to life. I really love the clever use of a sausage piece and clip to get the look just right. 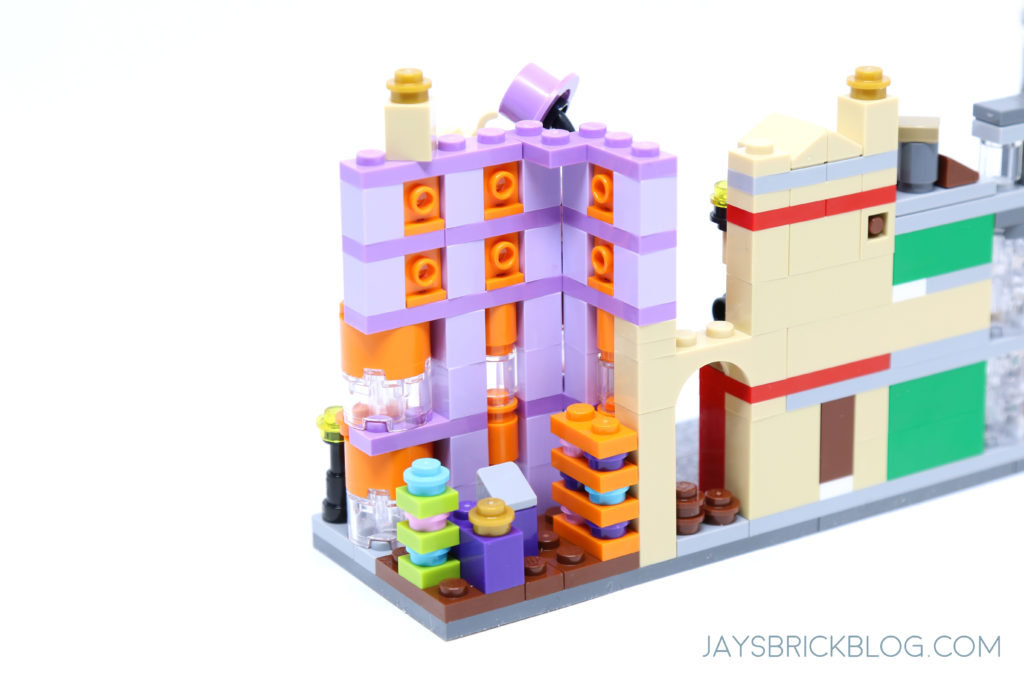 Here’s a look at the interiors, which boast a bunch of colourful shelves stocked with everything a wizarding prankster would want. 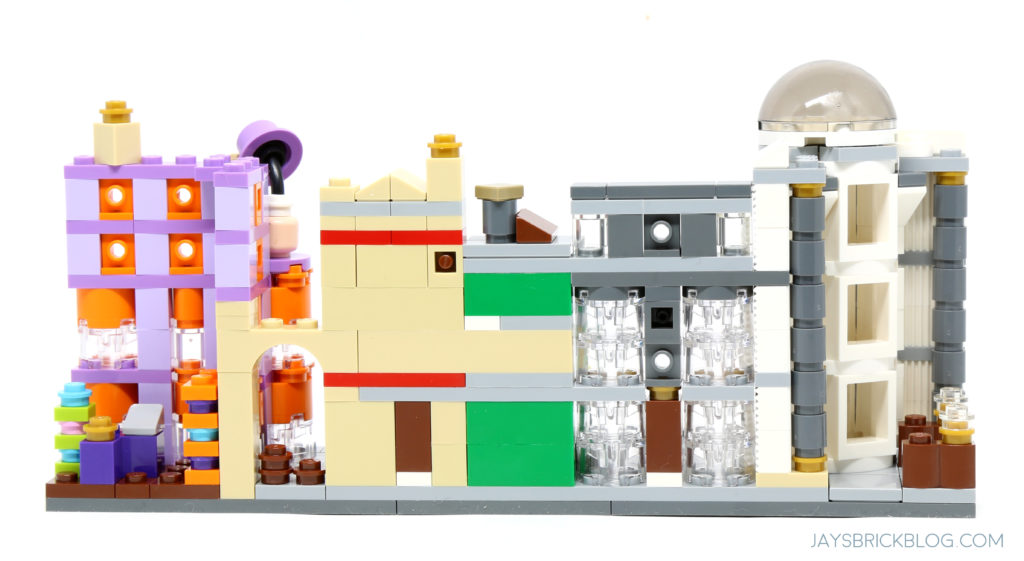 Here’s Diagon Alley from the back.

Final Thoughts: Wow, I can’t tell you how much I love this set. This is arguably one of the best Gift With Purchases that LEGO has ever put out and is an absolute joy from start to finish. The build was varied and fun, and the end result just looks great.

The designers made great use of what is essentially surplus parts to bring Diagon Alley to life, while retaining all its magical personality.

The inclusion of Ollivander will make Harry Potter fans really happy as he was previously only available in the large Diagon Alley set (which I hope they re-release in a grander scale).

This set also accomplishes something I didn’t quite expect – it makes a very strong case for an Architecture-style take on the Harry Potter universe, or heck, any other licensed property. I would love to see a version of Hogwarts, or Hogsmeade in the style of Architecture City Skylines, which is pretty much what this set is.

If you were on the fence about this set, I cannot recommend this set enough. It’s a great display piece, fun to build and isn’t too cost-prohibitive as its essentially free!

With the holidays approaching and with so many solid recent releases (like the Pop-Up Book), it shouldn’t be too hard to qualify for this set, unless you’re in Australia. The set is available on LEGO.com and Brand Retail Stores till the 21st of November, or while stocks last.

Thanks for reading! Hope you enjoyed this quick tour of microscale Diagon Alley. Have you got this set? I’d love to hear your thoughts on it in the comments section!

To read more of my reviews, be sure to check out the Review Hub. Do also follow my page on Facebook for quick updates (and sometimes, memes) that don’t make it to the blog, as well my Instagram for behind the scenes content and a bit from my life outside of LEGO.