Here’s a quick review of a set I picked up on Saturday to close off the week.

It’s June which means a whole slew of new LEGO sets have been released both online and in-store, and during a regular visit to the Legoland Discovery Centre in Melbourne this weekend, I was delighted to see the new Spider-man Far From Home Minifigure pack on sale, which I picked up almost immediately.

These minifigure packs have undergone a bit of a facelift and feature an all-new packaging design, which makes it look much more appealing.

With Far From Home hitting cinemas in a few weeks time, I couldn’t help but get excited for some new Spider-Man LEGO. 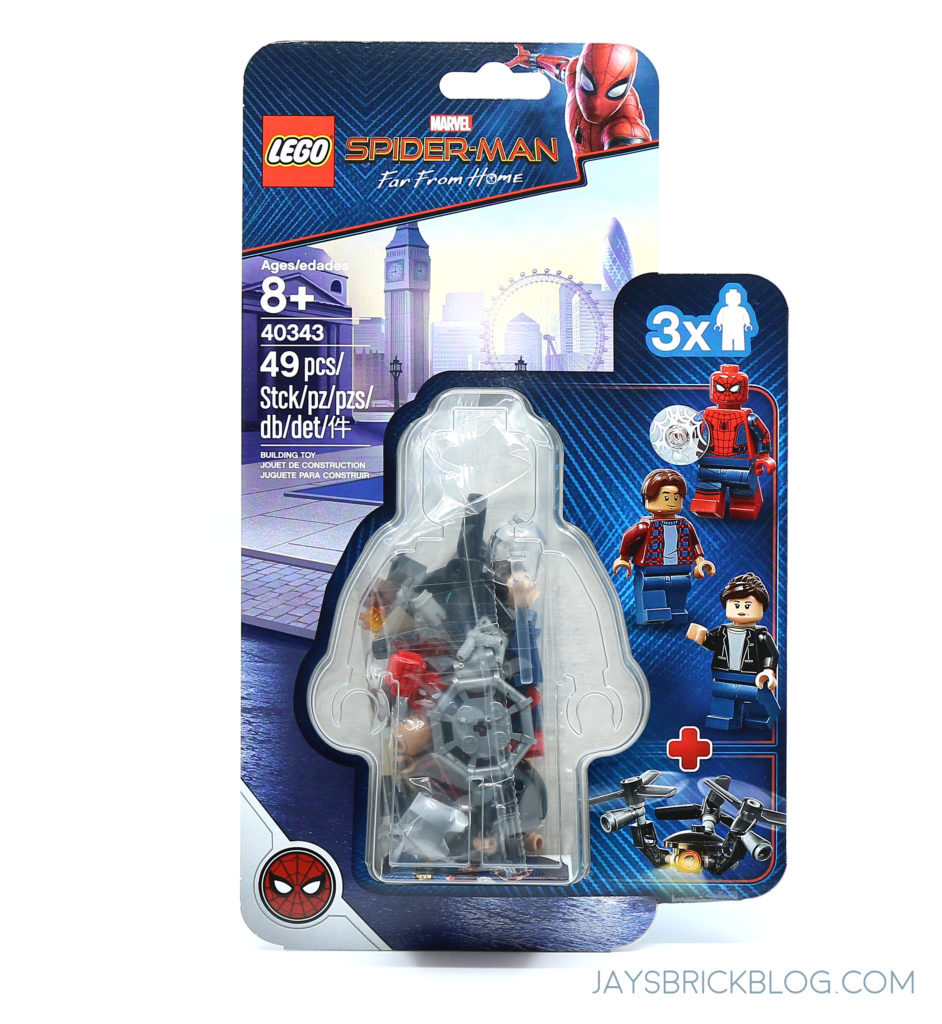 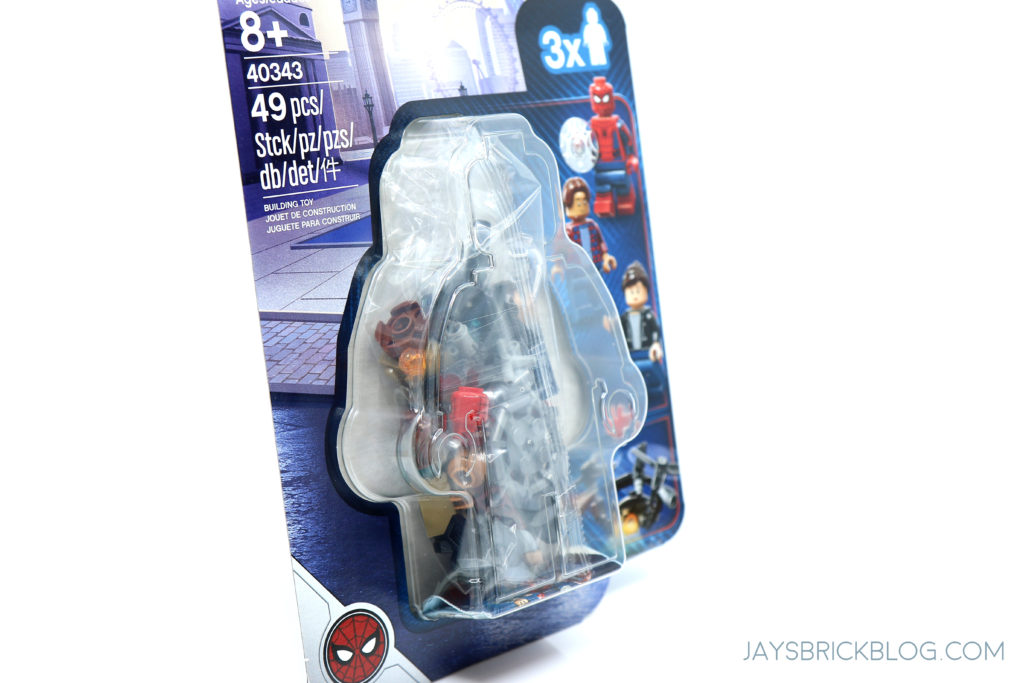 I love this new design, with the supersized minifigure blister-pack design, which lets you see the contents.

Sure plastic isn’t cool in 2019, but I won’t be throwing this out as I think the mould is pretty neat and I have some ideas on how I can repurpose them for decorative purposes. 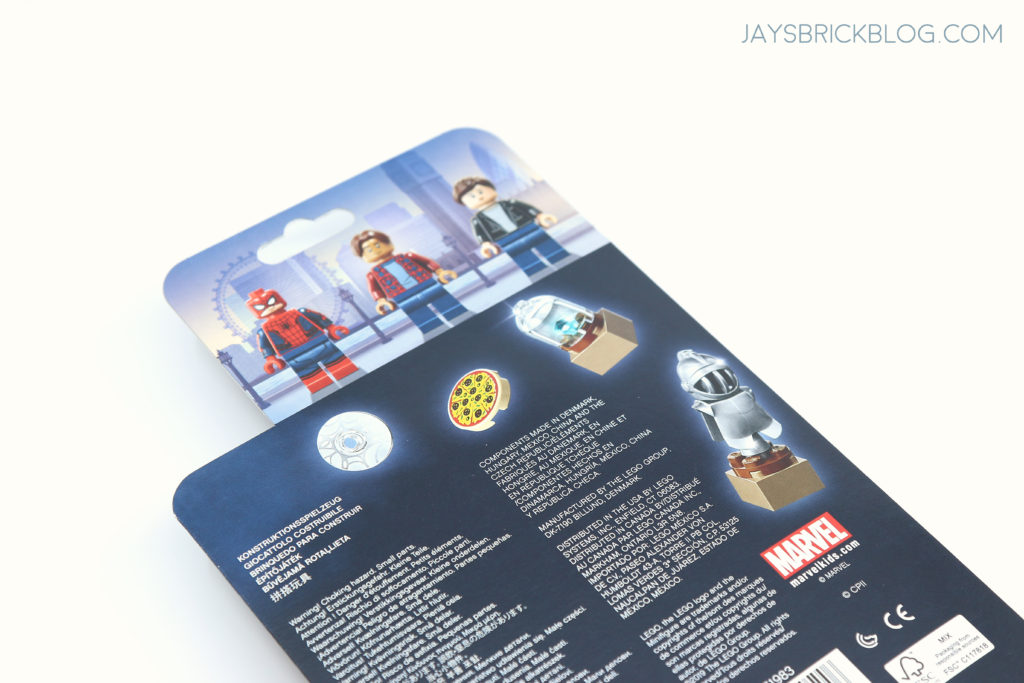 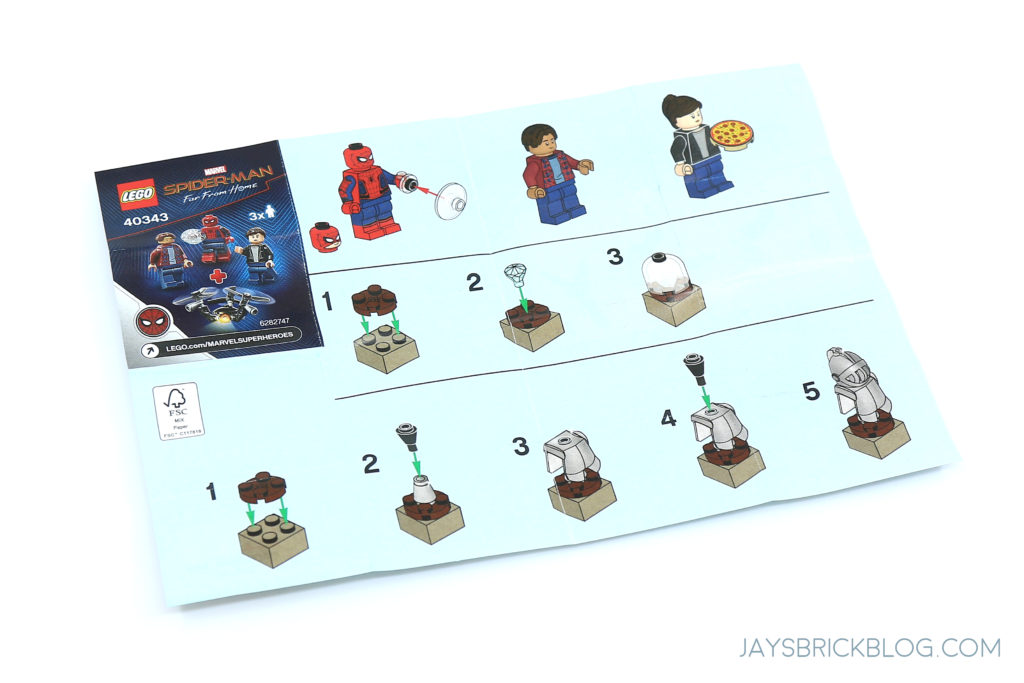 The back of the box is fairly uninteresting. I would’ve liked the names of the minifigures to have been printed – if you’re not a hardcore Marvel fan, you might think that Ned and Maria are just random persons.

The set also comes with a small instruction manual to construct the drone, coat of armour and gemstone stand. 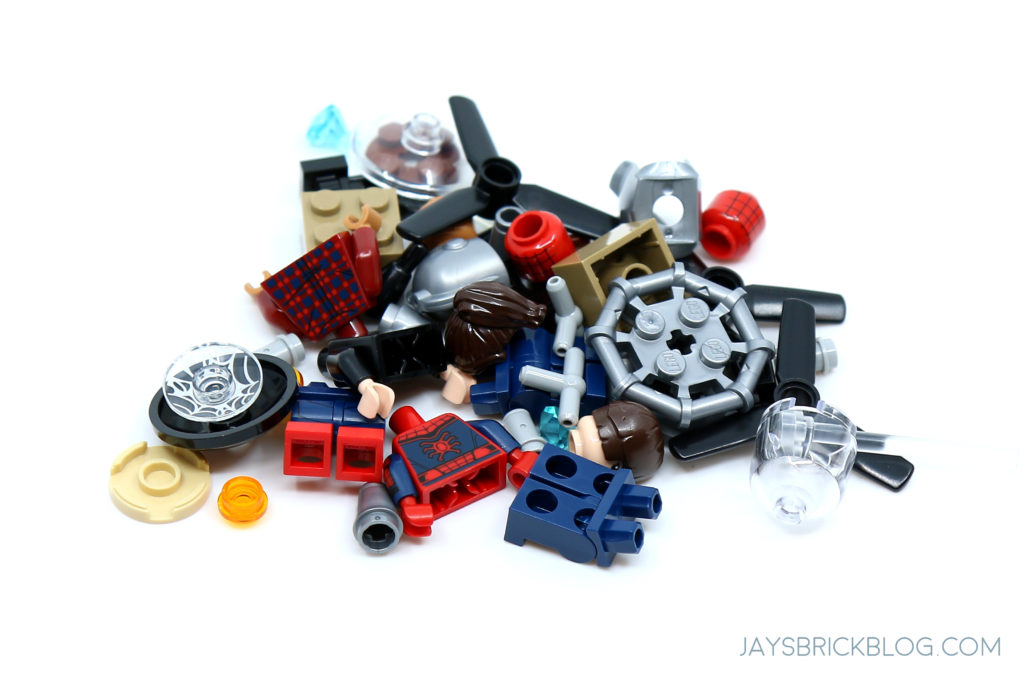 At 49 pieces, there really isn’t a lot going on here, and for a AU$23 set, I was a little disappointed with how minimal the contents were. 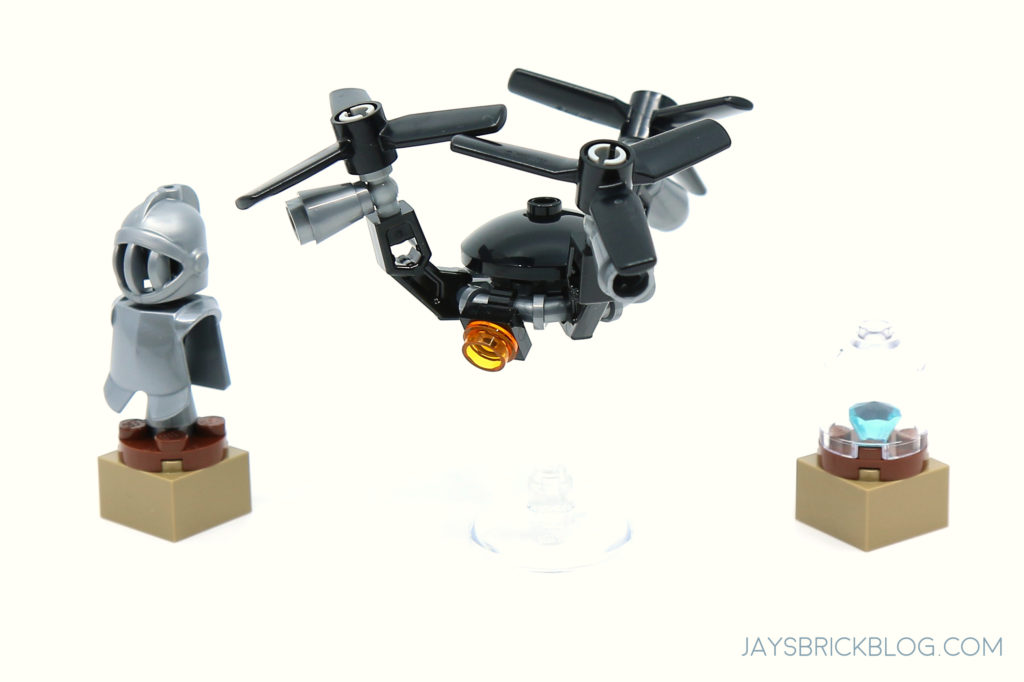 There are 3 builds in the set, a coat of arms, which makes use of the retro breastplate, and grill helmet, and a glass jar with a blue gem inside and a drone.

The most substantial build is the drone which comes with a stand which isn’t the most exciting. The set’s name suggests that Spidey and Ned are breaking into the museum, and maybe a Drone gets sent upon them and Maria Hill bails them out?

I don’t know, it’s hard to infer the movie’s plot from these 3 objects. 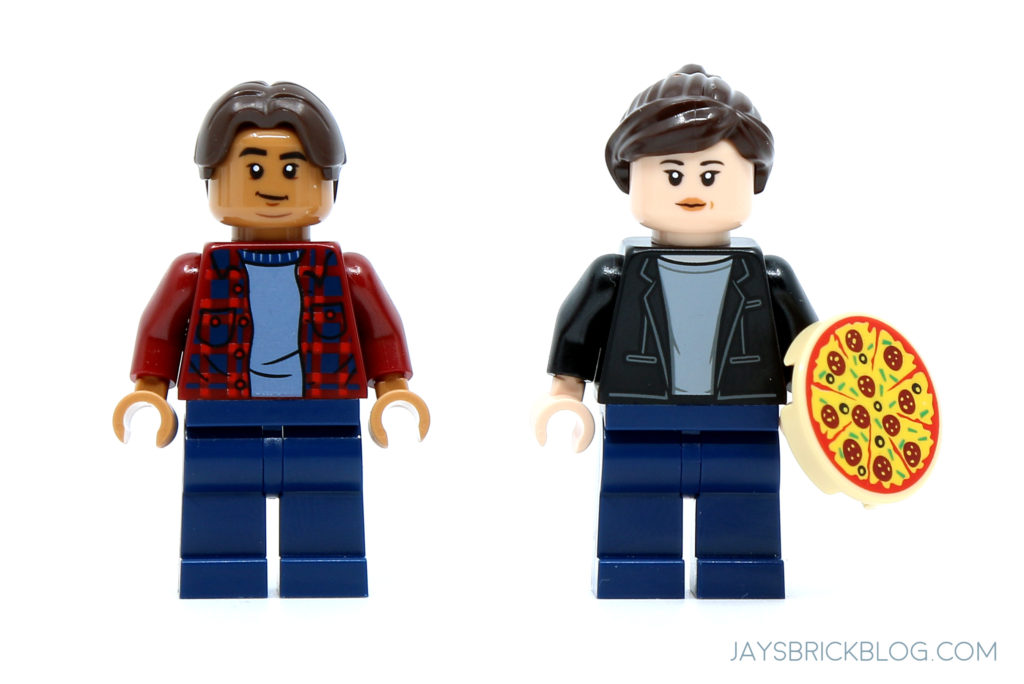 The Ned and Maria Hill minifigures are pretty great. This is Ned’s debut as a LEGO minifigure, which will most likely delight the real Ned who’s a massive LEGO fan (you may remember him dropping his Death Star in Homecoming).

I think they’ve captured Ned’s look particularly well, thanks to his centre-parted hair, and his flannel shirt over a blue t-shirt.

Maria Hill is dressed in civilian clothes, with a black leather jacket over a light blue top.

This is Maria Hill’s second outing as a minifigure after the SHIELD Helicarrier set, and for Marvel completionists, this minifigure pack is a quick, and relatively affordable way of adding her into your collection.

She comes with a pizza for some bizarre reason. 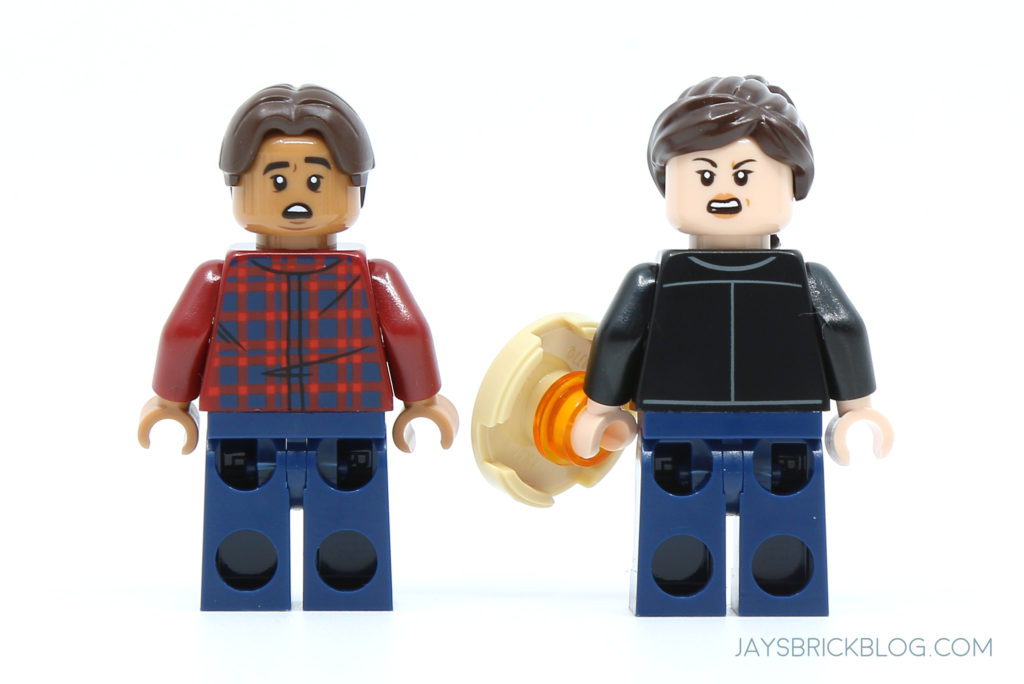 Here’s a look at their back printing, and alternate faces. 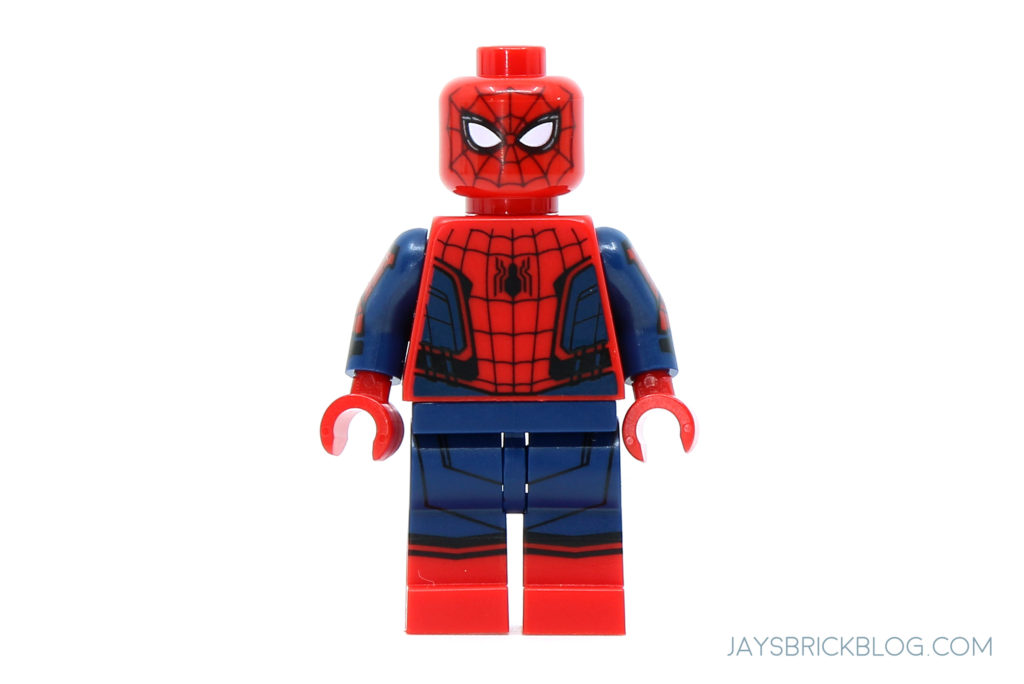 The star of this minifigure pack is of course Spider-Man in his Homecoming suit, which is the same as the one from Beware the Vulture or the ATM Heist Battle, which was a little disappointing as I was expecting at least a new Far From Home Suit. 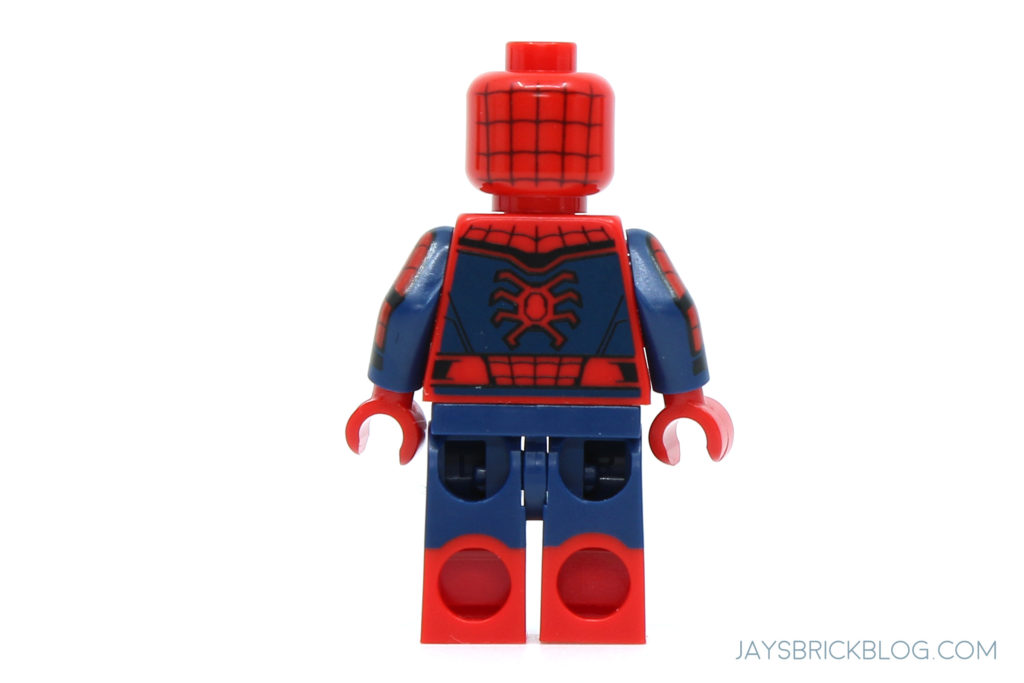 It’s not that it’s a bad suit, with an amazing level of detail across his body and if you haven’t owned this before, it still makes for a brilliant minifigure. 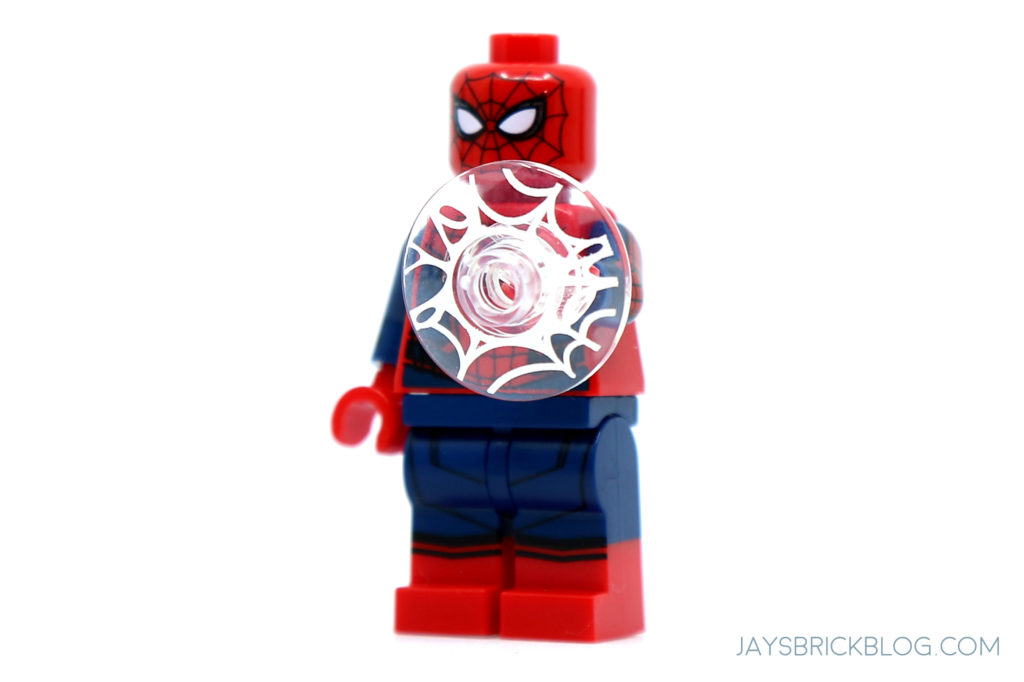 He does come with a relatively new web piece, which is a printed transparent dish. It’s only made an appearance in one other set, Aragog’s Lair, so it’s neat to see it being rightfully used in a Spider-Man set. 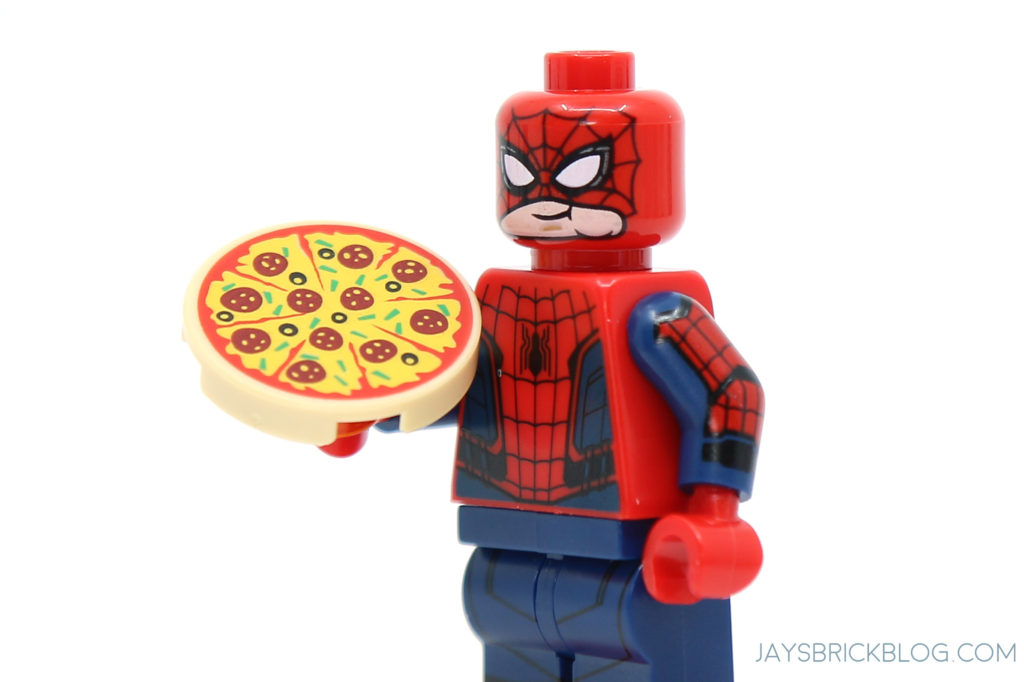 It’s not all bad, as Spider-Man comes with an alternate head piece. Yes, you get a totally separate new head as opposed to a face printed on the back.

It has Peter Parker’s mask pulled upwards so you can see his jawline, with him comically chewing something in his mouth, which I’m guessing is pizza.

This addition of the new headpiece, I guess does technically make this minifigure exclusive to this set. 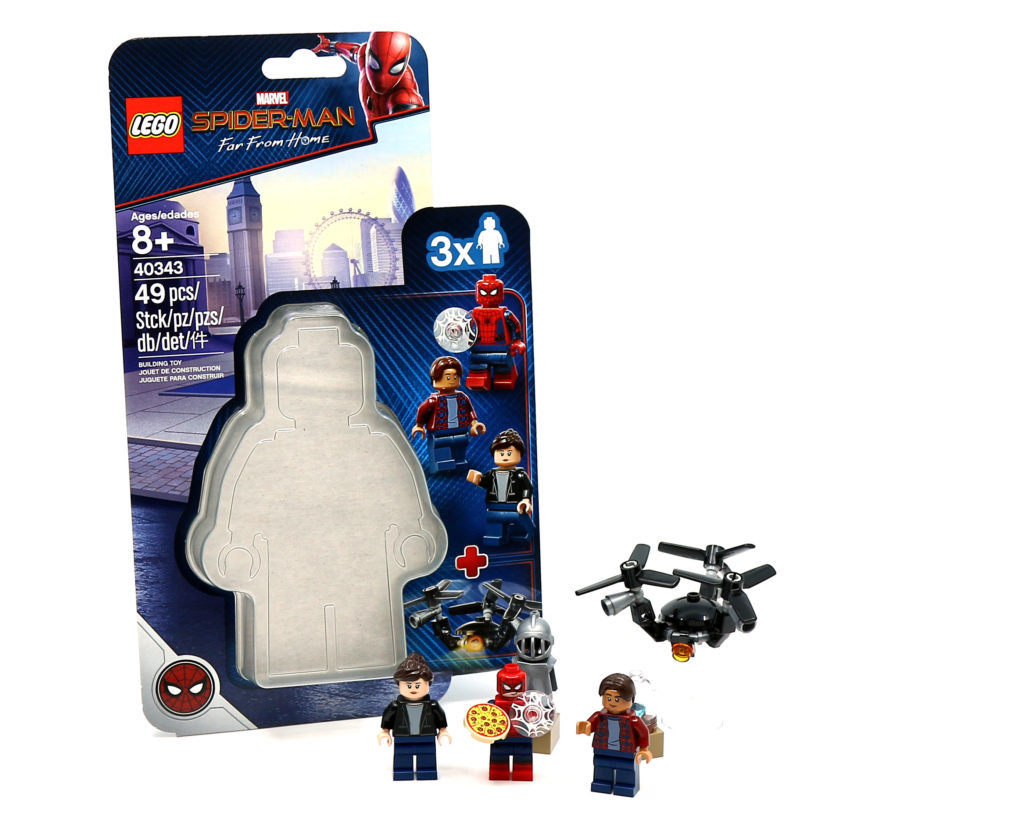 Final thoughts: Like all minifigure character packs, 40343 is all about the minifigures and you do get two and a half exclusive minifigures which isn’t too bad.

Ned and Maria Hill are great minifigures, and I love it when LEGO expands the number of new characters available, especially when they include side characters like Ned, and bring back Maria Hill to make her more accessible for those that didn’t drop AU$500 on the SHIELD Helicarrier set.

Spider-Man being the same recycled minifigure design is heaps disappointing, even if you do get an alternate chewing face, which is kinda goofy.

Unfortunately, the builds are completely lacklustre and don’t add much to the overall minifigures. They just feel like filler parts that will be quickly harvested into your spare parts tub, and accessories drawer.

Some fun models like accessories that the minifigures can use to pose with or interact with each other would’ve been much better.

This is a really expensive (for what you’re getting) set, and really aimed at hardcore Marvel fans who must collect every single new minifigure, or charcter variant, or for the cash-strapped parent who wants to get a new Spider-Man minifigure pack for their kid, without having to splash out on the set.

For your average LEGO or even Marvel fan, at AU$23/$US$15 a pop, it feels like you’re much better off saving a bit more to buy a proper retail set.

It’s really hard for me to recommend this set as the value is just poor, but if you have a spare AU$23 lying about in your pocket, and want to add Ned and Maria Hill to your Marvel collection, it becomes an okay purchase – not something you should rush out and buy.

Thanks so much for reading, hope you enjoyed it and this helps you get a closer look at the 40343 Spider-Man Far From Home Minifigure pack., which you can order from LEGO.com, or grab at your local LEGO Store or Legoland Discovery Centre.

Let me know what you think of these new Minifigure Packs in the comments, and if these strike your fancy in any way. Will you be picking one up or giving this a miss?

Don’t forget, you can find many more reviews in the Jay’s Brick Blog Review Hub!