I’m a big fan of LEGO Elves and have amassed nearly every set that has been released. If you’ve read my previous Elves reviews, you’d know that I really enjoy the theme’s bright, vibrant colour palette and the whimsical fantasy setting.

Elves is one of the most exciting sets on the market now and if you’re able to look past the “girly” proposition, they make for plenty of LEGO fun.

It’s a school night, so I decided to review one of the smaller Elves sets that came out earlier this year – 41172 The Water Dragon Adventure. The first half of 2016 Elves sets saw the main characters take flight and the introduction of dragons into Elvendale.

The Water Dragon Adventure is the smallest set which contains one of the fancy new dragons, so here’s a quick review of the set! 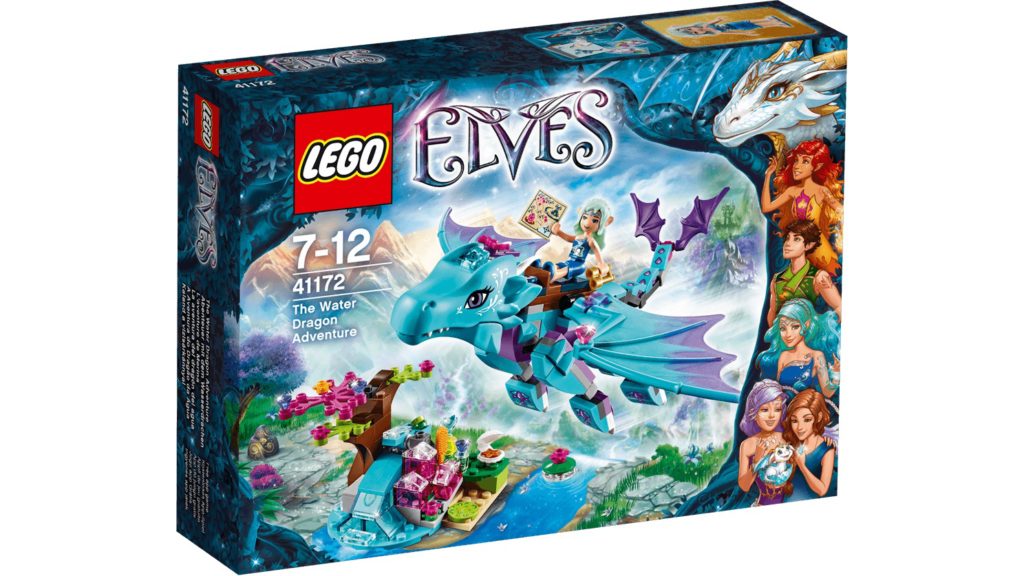 The Water Dragon Adventure’s affordable price makes it a good gateway set if you’d like to get a taste of the new Dragon-themed Elves sets. It often goes on sale, and if you can grab it for $25 or less, you can expect to get quite a lot of value out of it, even though it’s a small set. 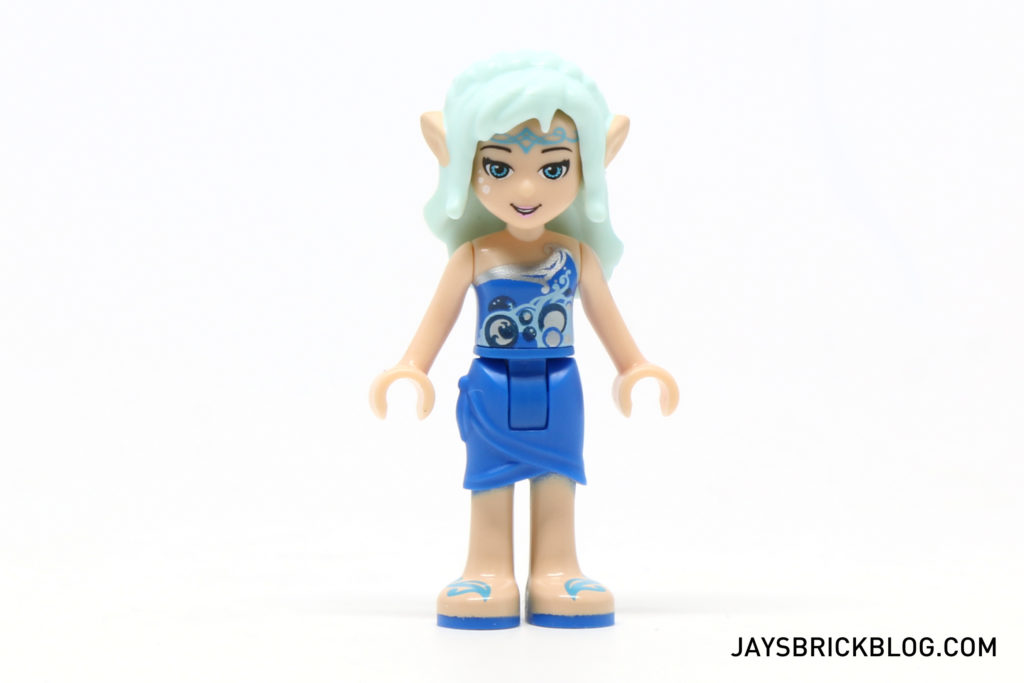 The set includes one Naida Riverheart minidoll. Naida is the elf with an affinity for water, which explains why her primary colours are mostly blue. Like all Elves characters, she has fairly elaborate markings and patterns on her face which gives off a convincing mystical look.

Compared to her 2015 version, she’s got a darker blue strapless dress with some pretty attractive silver accents throughout her top. I quite like her new dress as it stands out a lot more against her pale blue hair colour. 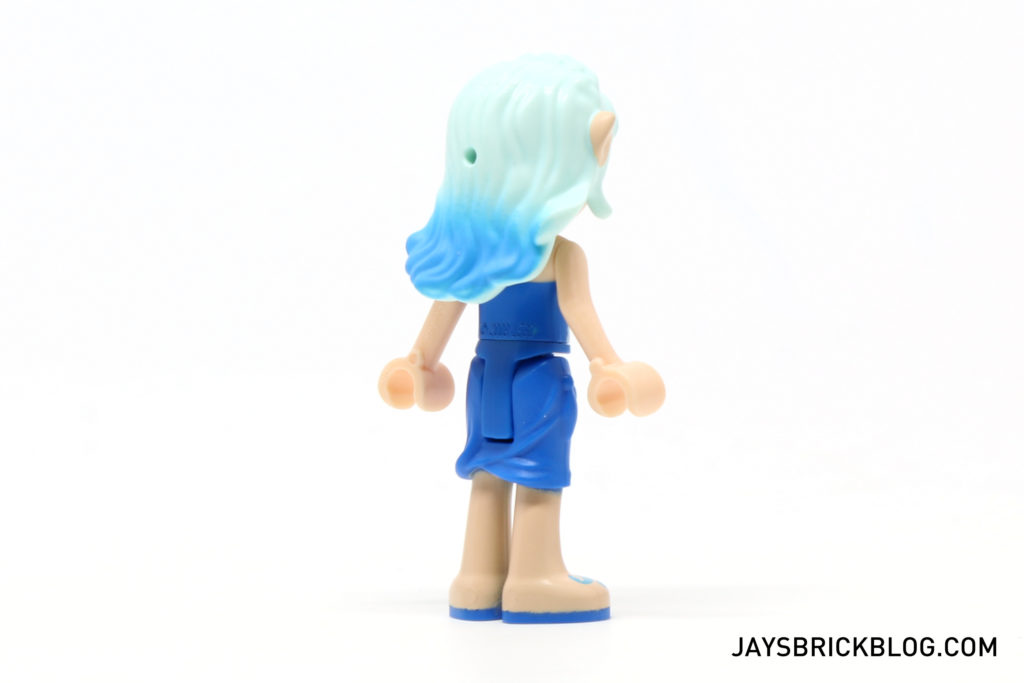 Naida’s hairpiece remains the same, with that lovely blue gradient effect that intensifies towards the tips. Her hairpiece, which is made out of rubbery plastic also has elf-ears sticking out, which look good but unfortunately also means that re-using this hairpiece might prove a little tricky. It’s a bit of a shame since I’d really love an edgy looking gradient hair piece for my regular minifigs. 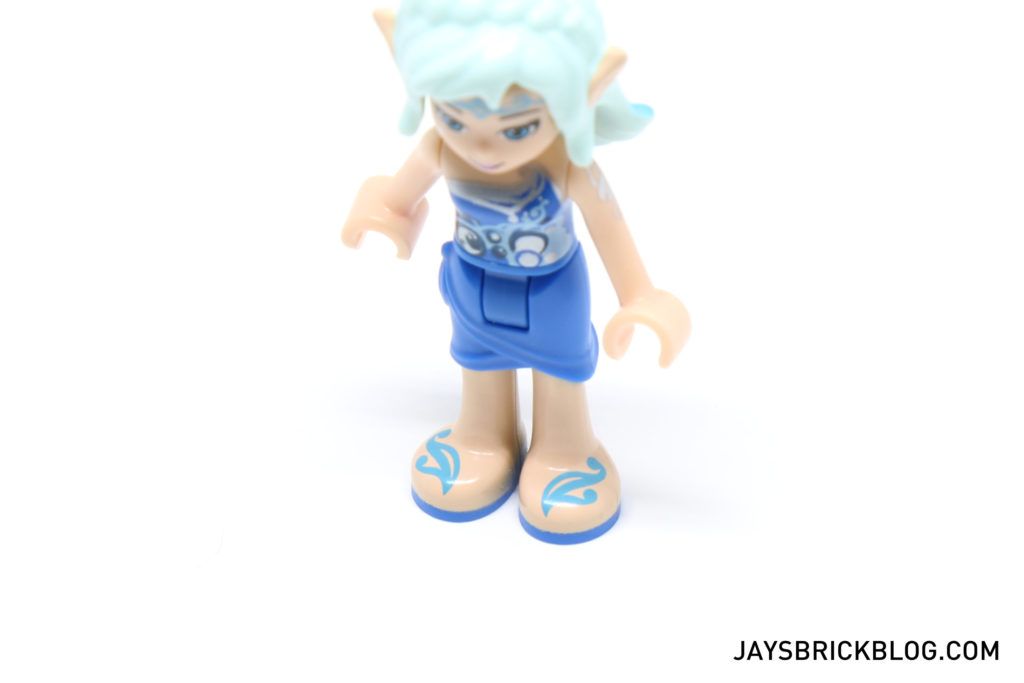 Naida also has some pretty snazzy footwear. You can see her wavy bright blue sandal straps printed on her feet, which is a cool bit of detail. 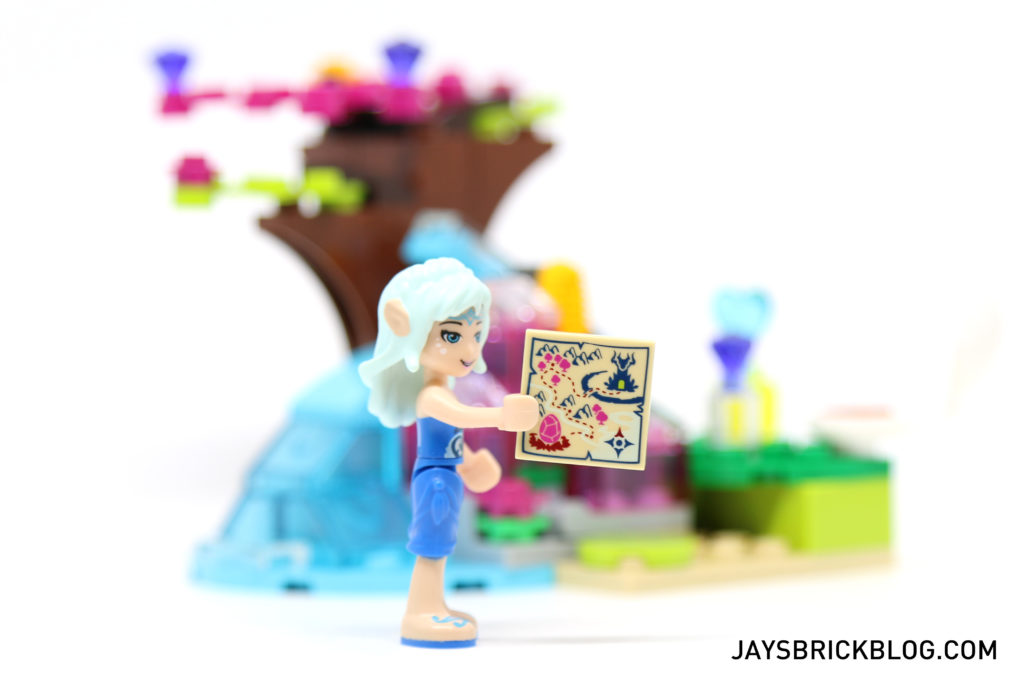 Naida comes with a printed map tile, this time showing the location of what I’m guessing is the Evil Witch’s fortress, and also has a giant pink dragon egg in one corner of the map.

Minidolls aren’t for everyone, and some LEGO fans are still opposed to the unusual aesthetic. I’m a fan of minidolls, so I’m naturally a big fan of the Elves characters since they’re all mostly well designed. Naida is a great upgrade from her 2015 self – Elves fans will be pleased by her updated threads and overall look. 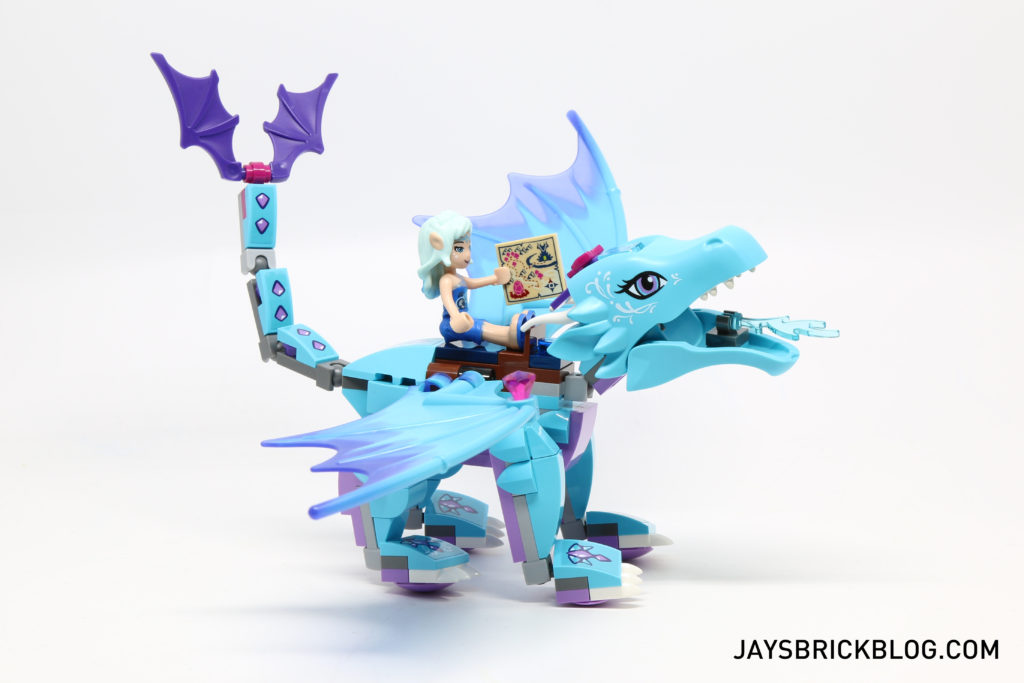 The build starts off strong, assembling the focal point of the set – Merina the Water Dragon. The dragons are almost entirely brick built, which is really great since you’re able to benefit from plenty of articulation thanks to the use of Mixels ball joints for their limbs.

The Water Dragon is quite an impressive build. Her (I’m guessing she’s a her) bright blue colour scheme is striking, which is offset by some pale lavender parts dotted across her body. Merina seems to be a juvenile dragon as she isn’t as large as some of the other dragons in the theme, but when you place Naida in her saddle, the Water Dragon does still feel fairly large. 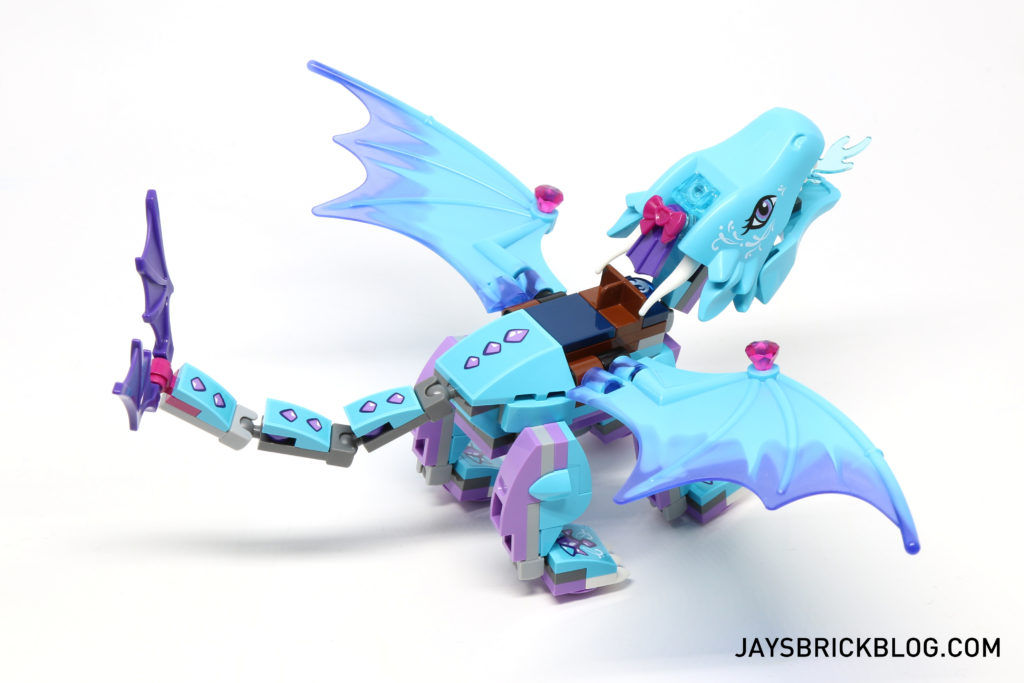 Here’s a look at Merina’s wingspan. She has little rubies on each wing and her wings can swivel and move about quite a bit, allowing you to tuck them upwards or spread them at full stretch. 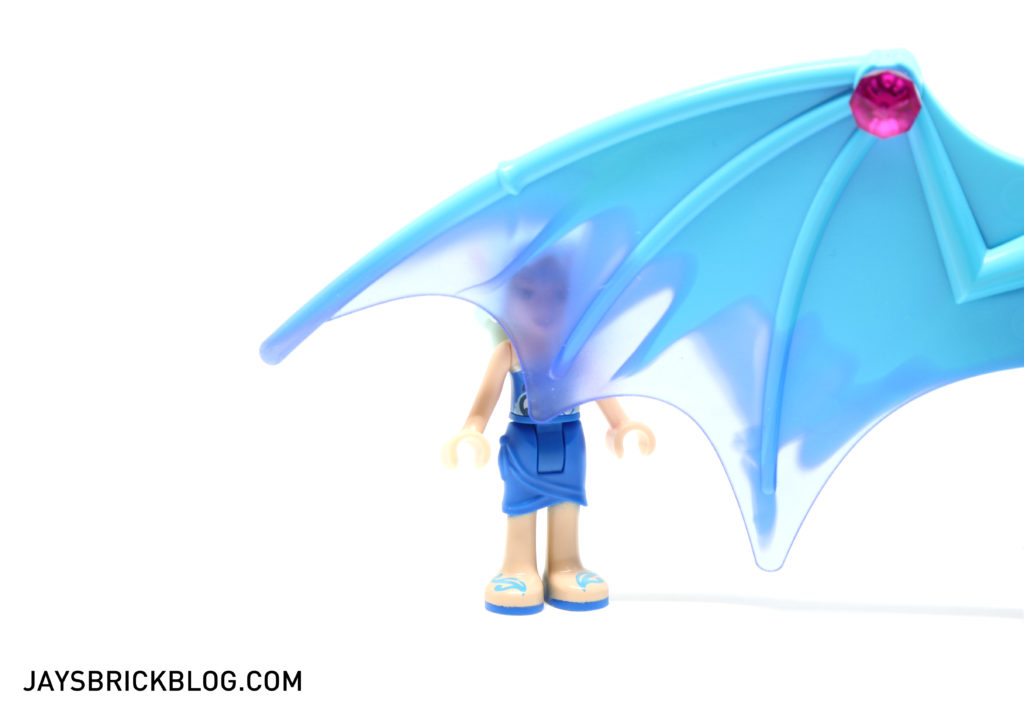 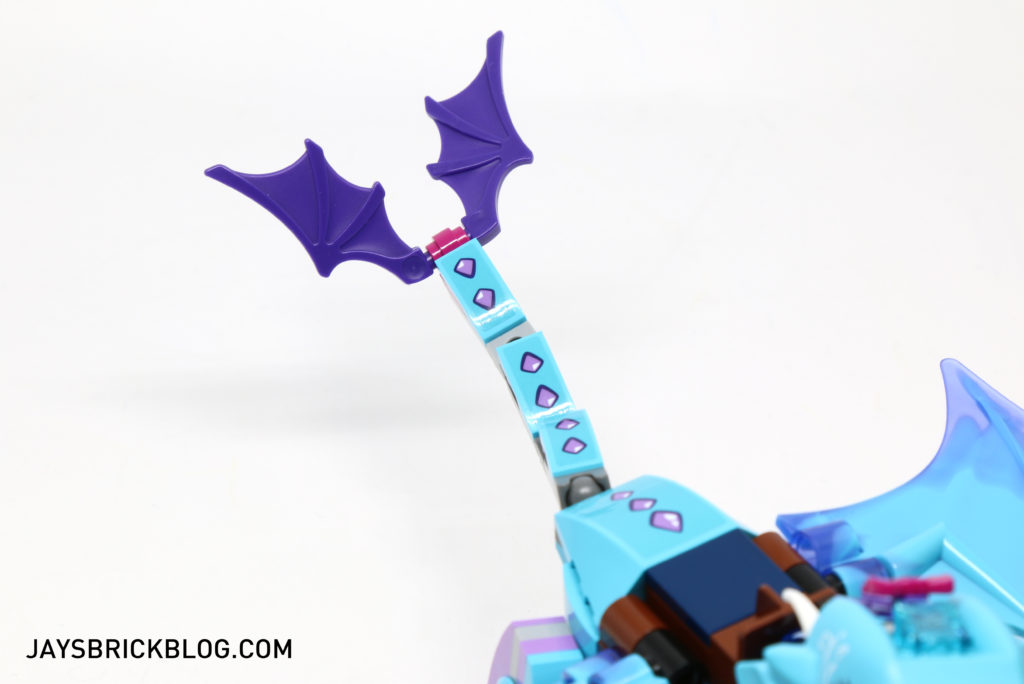 Here’s a look at Merina’s tail which forks in two at the end. Like the rest of her body, Merina’s tail is fairly flexible. It does look a little like a scorpion’s tail!

There are little purple gems that adorn her spine, from her lower back – these are all stickers and you’re free to apply them or just leave it blank. In hindsight, I should’ve not put the stickers on as they feel a bit too cartoony and out of place for me. 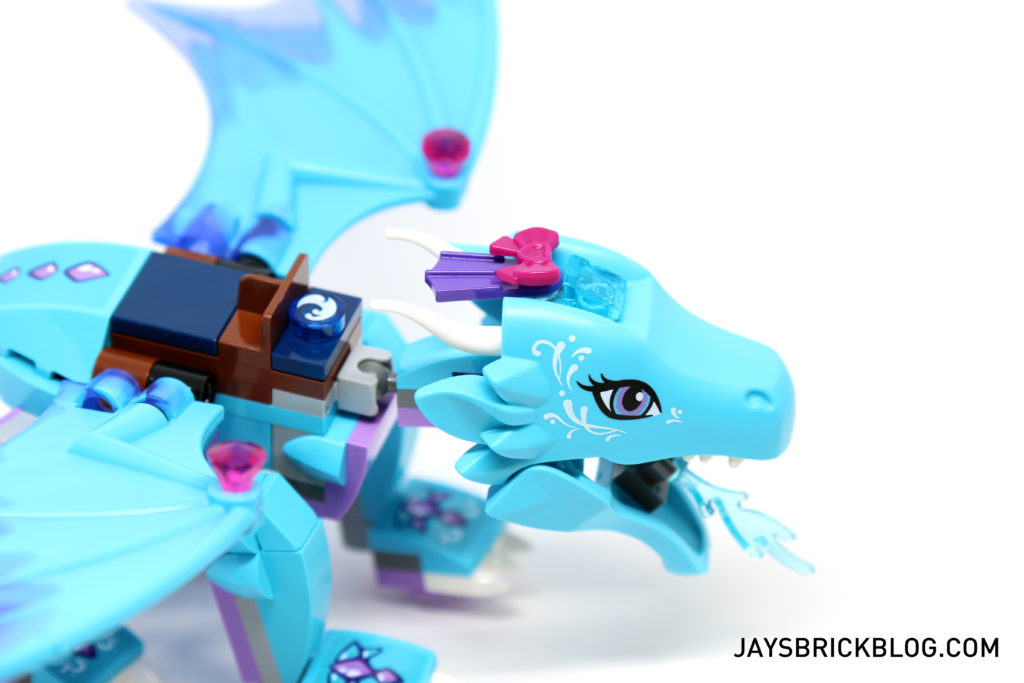 I’m pretty sure Merina is a lady dragon, judging by a cute little pink bow that’s affixed to her head. She also has a solitary purple flipper attached to her head as well.

All the dragons in the new Elves sets have a brand new moulded headpiece, which has lovely printing on it for the eyes and Elves-like markings across the dragon’s face. Merina’s markings are very similar to those on Naida’s, which makes sense since both of them seem to share a water-based bond. 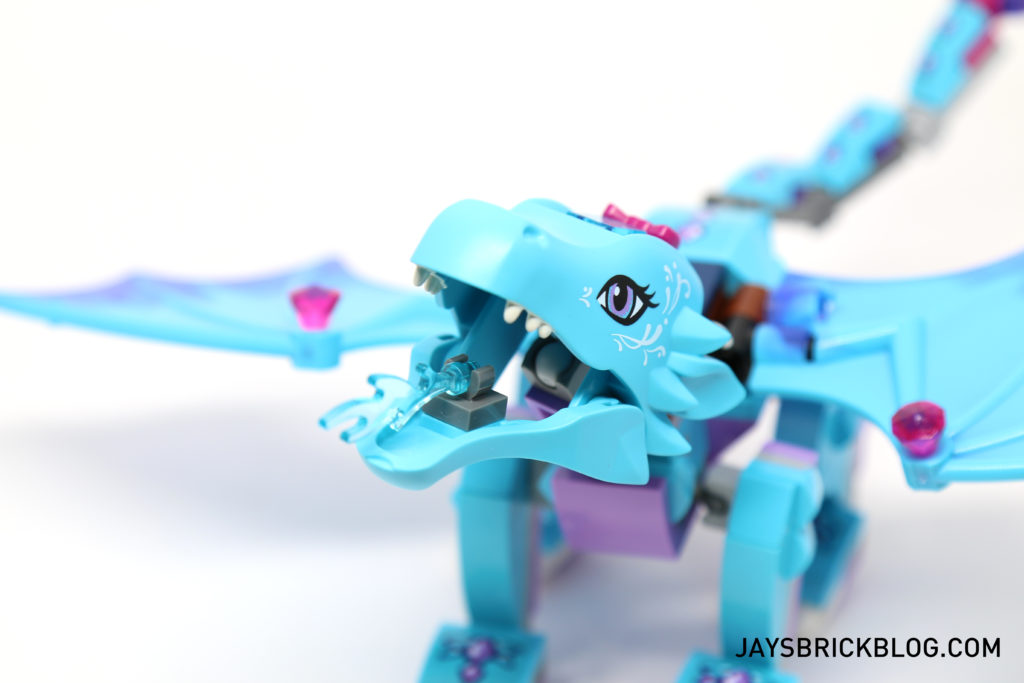 There’s a little jet of water that streams out of Merina’s mouth. Check out her white teeth on her upper jaw.

You can open and close her jaw, which is quite fun and kids should appreciate this extra bit of interactivity. 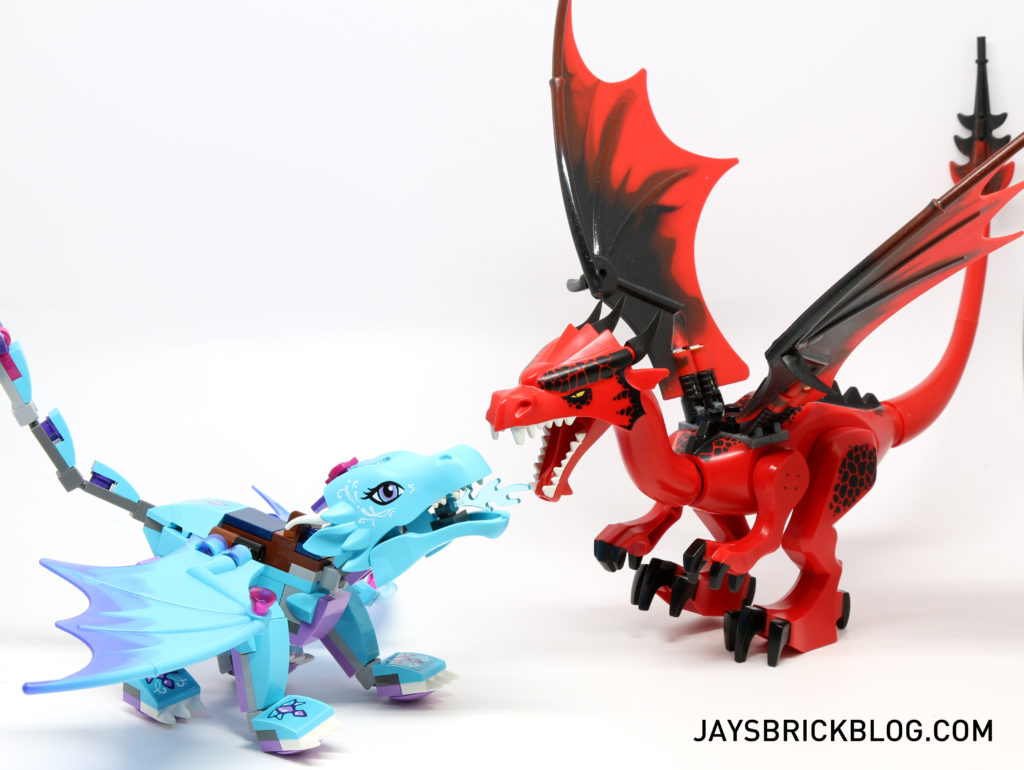 For comparison’s sake, here’s Merina the Water Dragon next to a modern Castle/Kingdoms dragon from 70403 Dragon Mountain.

Merina is a lot smaller, but I’m a really big fan of her brick-built body. It feels much more like a LEGO creation, as opposed to a huge chunk of plastic that has limited articulation. Merina’s legs, tail, head and wings can all move, giving you quite a number of options on how you want to pose or display her.

The articulation is also a huge plus for younger children who will definitely appreciate its playability and poseability. 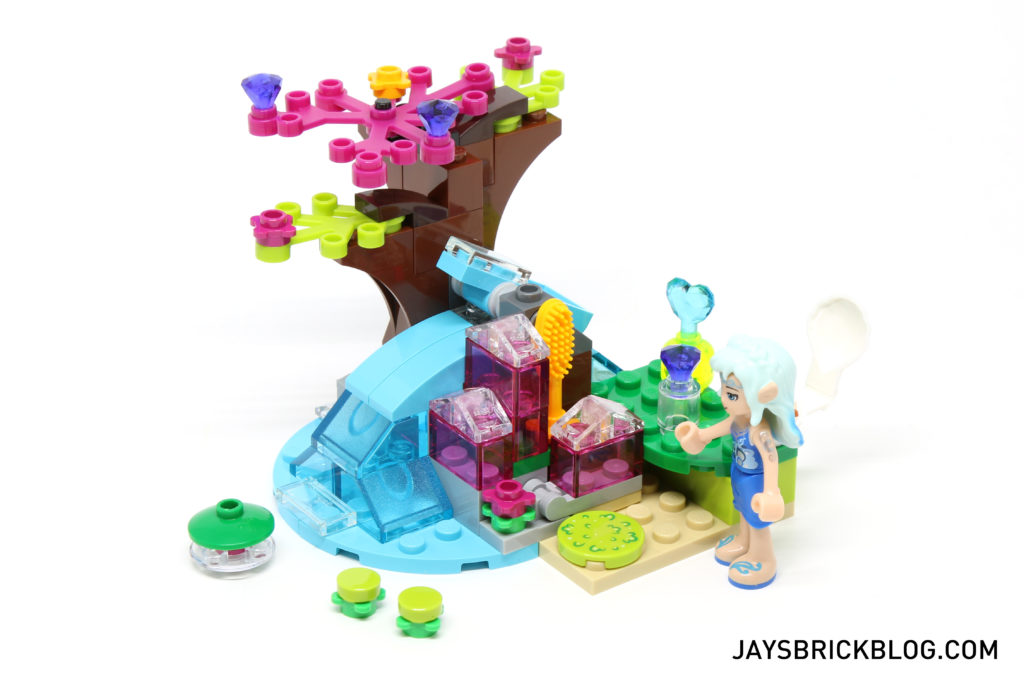 The last thing you build is a small but rather intricate waterfall vignette. True to Elves’ fantasy setting, the waterfall looks like it walked straight out of a fairy tale. 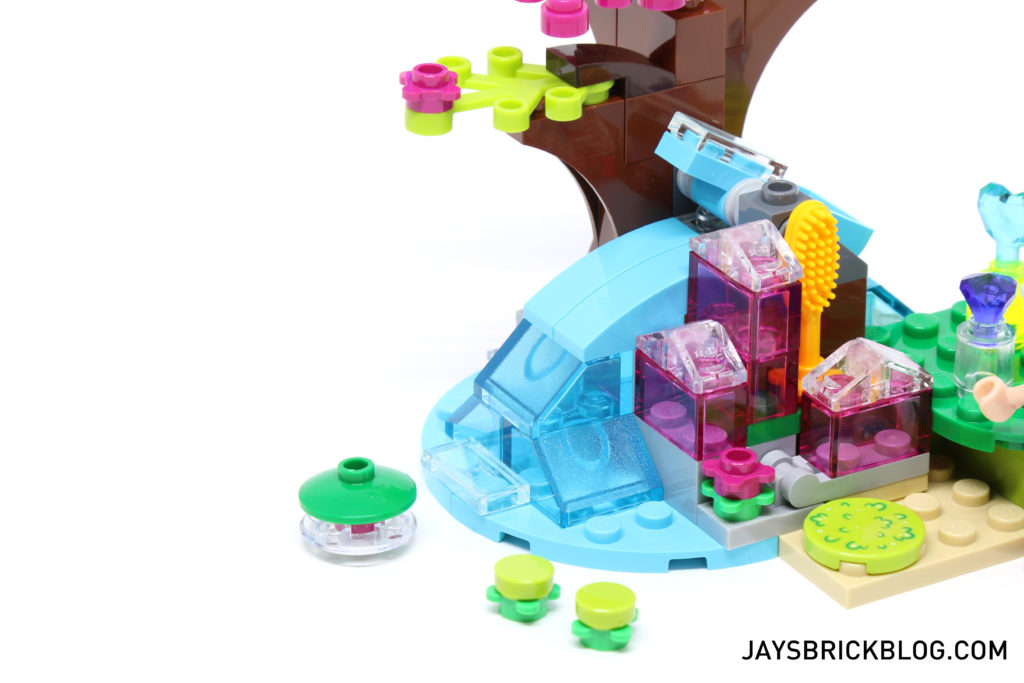 There are a number of floating lilies or flowers in the “water area” and the waterfall is made out of a simple but effective combination of slopes and curved slopes. The use of transparent blue slope pieces is especially clever as it does a decent job of creating the illusion of running water.

There is a cluster of tranparent pink crystals right next to the water with a comb among its midst. 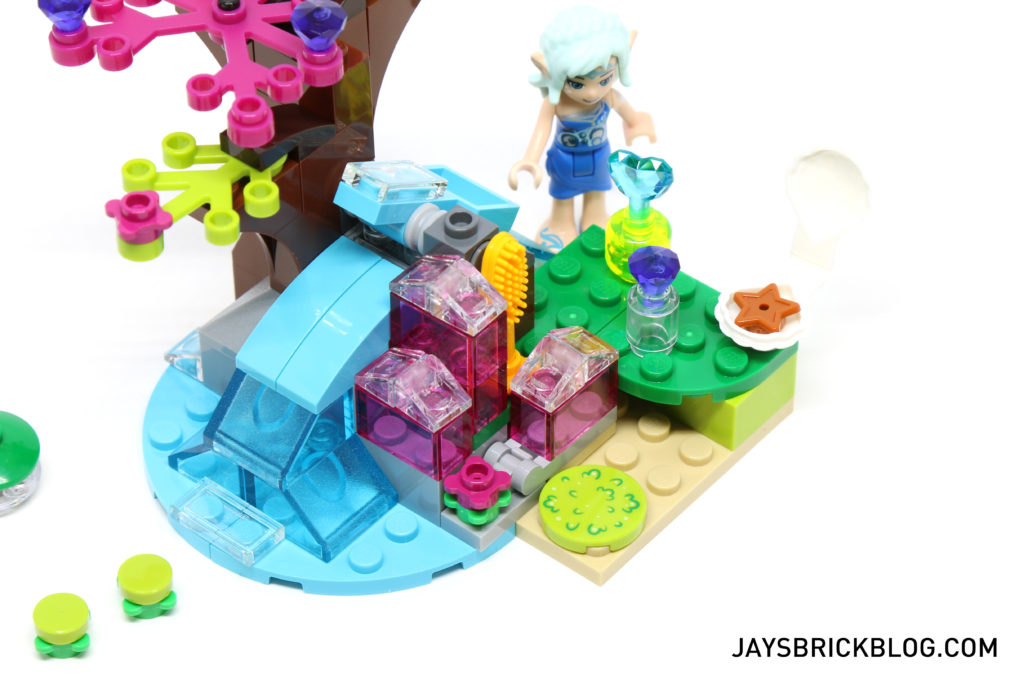 Elves sets are a treasure trove of interesting LEGO elements. The green lily pad round tile is a printed element, which was an awesome surprise and is one of my favourite elements in this entire set.

There is a small grassy area which looks perfect for a picnic and there are several bottles and vials that act as magical potions. Also included in the picnic area is a scallop with a star inside. 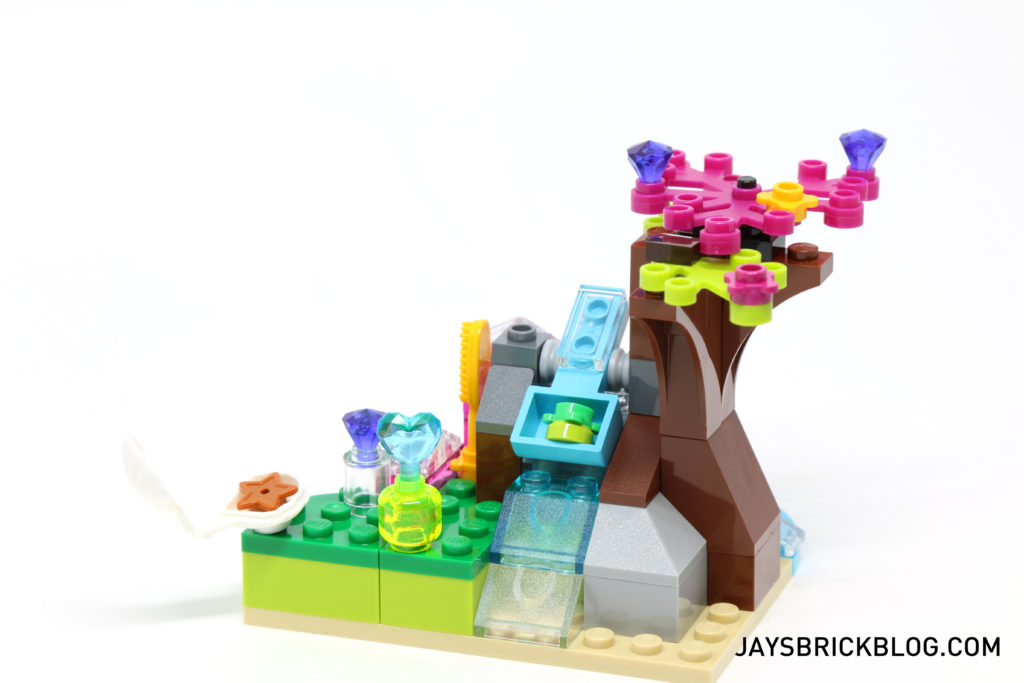 For play features, there’s a small catapult built into the waterfall which launches small lily pads as projectiles. The catapult is a bit of a strange addition to the otherwise tightly designed vignette. It just seems a bit too “conflicty” and out of place since I can’t imagine a scenario which requires Naida or the Water Dragon to fire lily projectiles.

All in all, the waterfall is a decent little vignette with some really useful and fascinating elements included. The colourful leaves are always nice to add to your collection and when you’re done with this build, you can harvest quite a number of interesting parts into your parts collection. 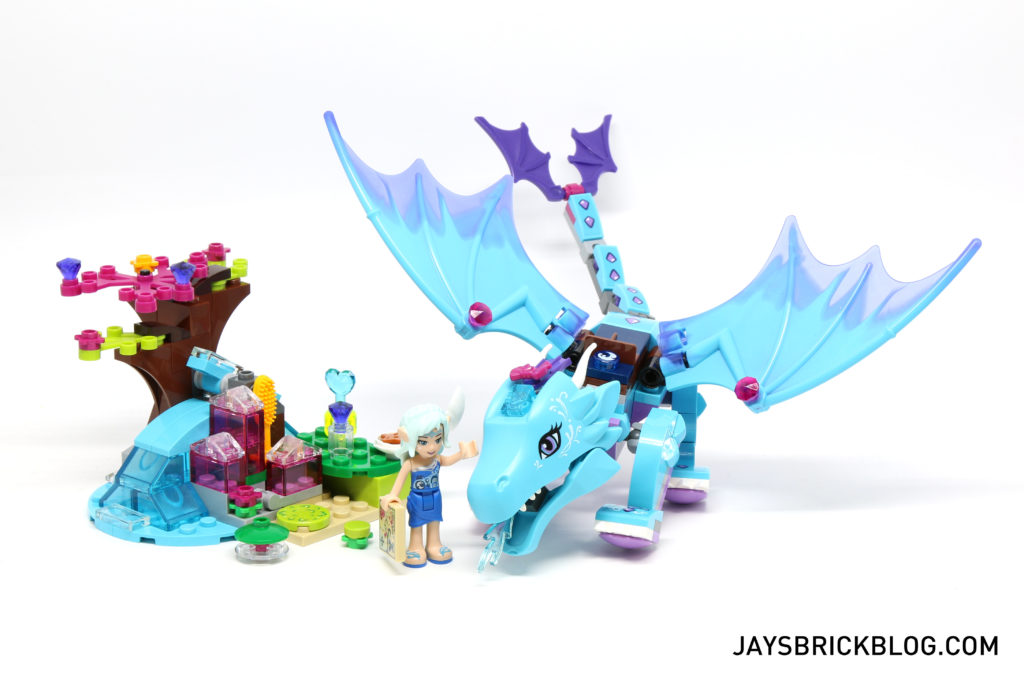 Final thoughts: For a sub $30 set (you shouldn’t be paying full price for this), 41172 The Water Dragon Adventure packs excellent value from a great introductory set into the new Elves sets. Merina the Water Dragon alone is well worth the price of admission.

I’m a big fan of brick-built creatures and the Water Dragon makes for a very satisfying small-sized build. The articulation is a big plus since the dragon is extremely poseable. While snapping photos, I had a pretty good time setting it in all sorts of poses. The level of articulation in the limbs gives it a really organic, natural feel that you don’t get from other kinds of dragons with big chunky custom mould bodies.

The build was extremely easy, so it’s very suitable for younger kids. I built it effortlessly one night after I got back from work and it was a pretty relaxing and drama-free process.

The little waterfall vignette is also a great build, giving the water dragon and Naida some much-needed context. There are plenty of cool parts used for the waterfall section which is always reassuring since you can always reuse them for other builds.

The Water Dragon Adventure is a delightful set for fans of LEGO Elves. For more agnostic or neutral LEGO fans, it might take a bit of a push to embrace the more feminine features of the Elves sets and their minidolls – this set isn’t for everyone, but if you’ve got an open mind, it makes for a great introduction to the new Elves dragons.

Also, LEGO dragons are, and will forever be pretty sweet no matter what shape they take.

Thanks for reading this review! If you’d like to check out more LEGO Elves or reviews from other themes, head on over to the Jay’s Brick Blog Review Hub!

So what do you think of the new Dragons in Elves? Are you a fan? Let me know in the comments section!