I have a weird relationship with Brickheadz. I remember being relatively positive when they launched but my enthusiasm tapered off shortly when I realised that a whole heap of them were released as Comic Con exclusives (which I abhor) and the range of licensed properties were also terribly lacking – there were hardly any characters outside of ones in existing LEGO licenses.

I stopped buying Brickheadz for awhile, but recently, I decided to jump back in with the Boba Fett Brickheadz. Everybody’s favourite Bounty Hunter was a strong enough draw, and unlike recent releases, the build looked sufficiently interesting, so here’s a quick review to cap off the week! 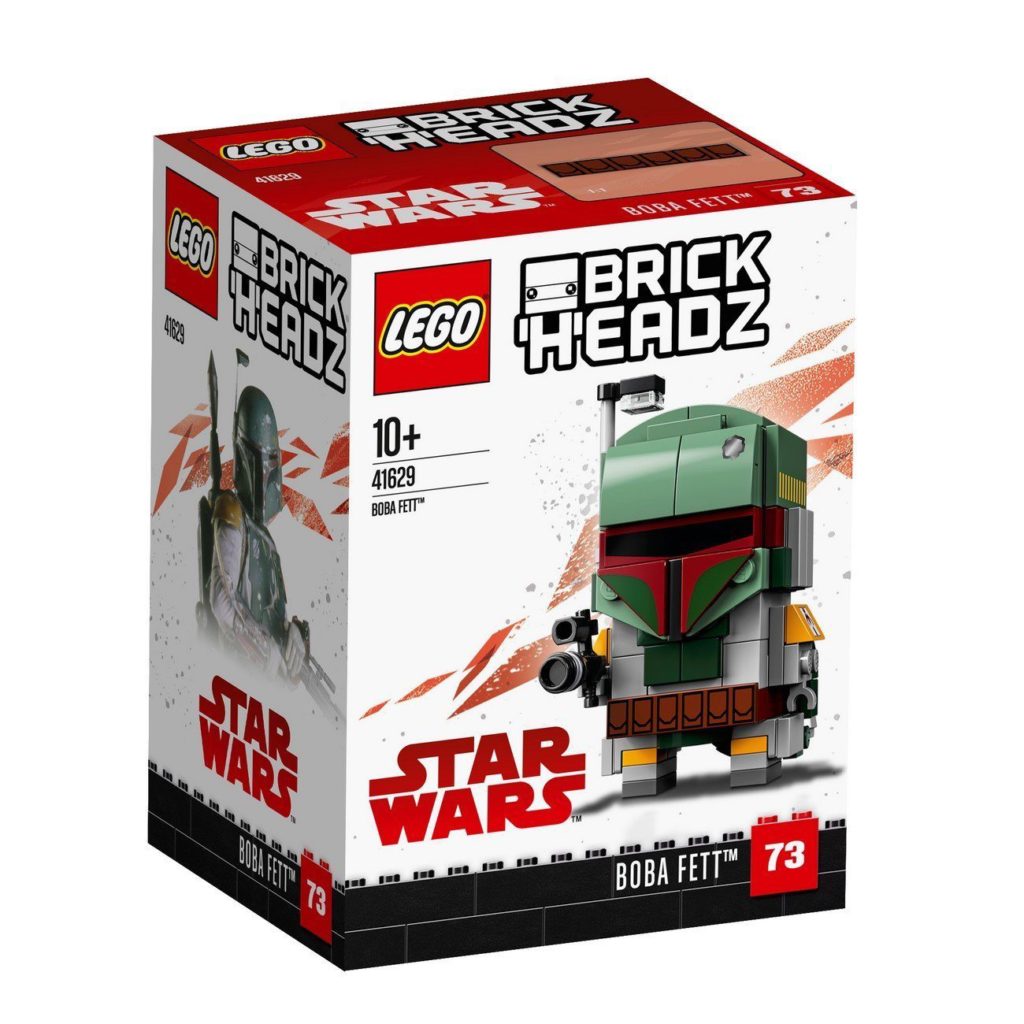 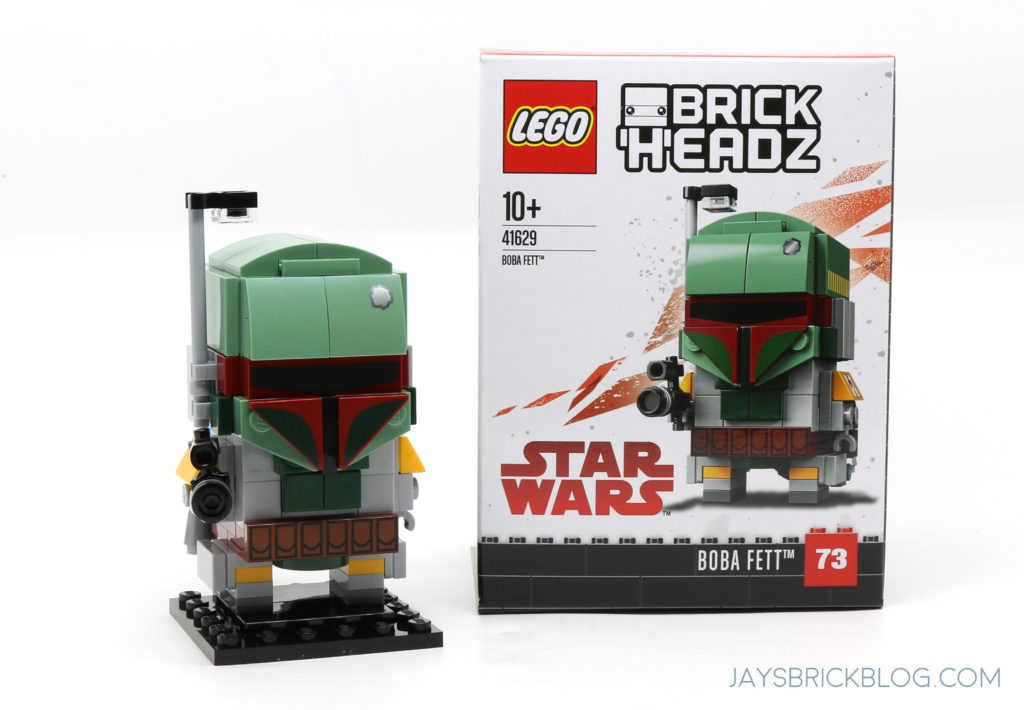 Here’s the photo of the completed Brickheadz and box. Unlike most Brickheadz, Boba Fett had a bit more of a varied and unique build – it wasn’t just assembling the central core followed by slapping tiles and curved slopes on the sides but there were some pretty clever methods employed to build his Mandalorian helmet which I appreciated. 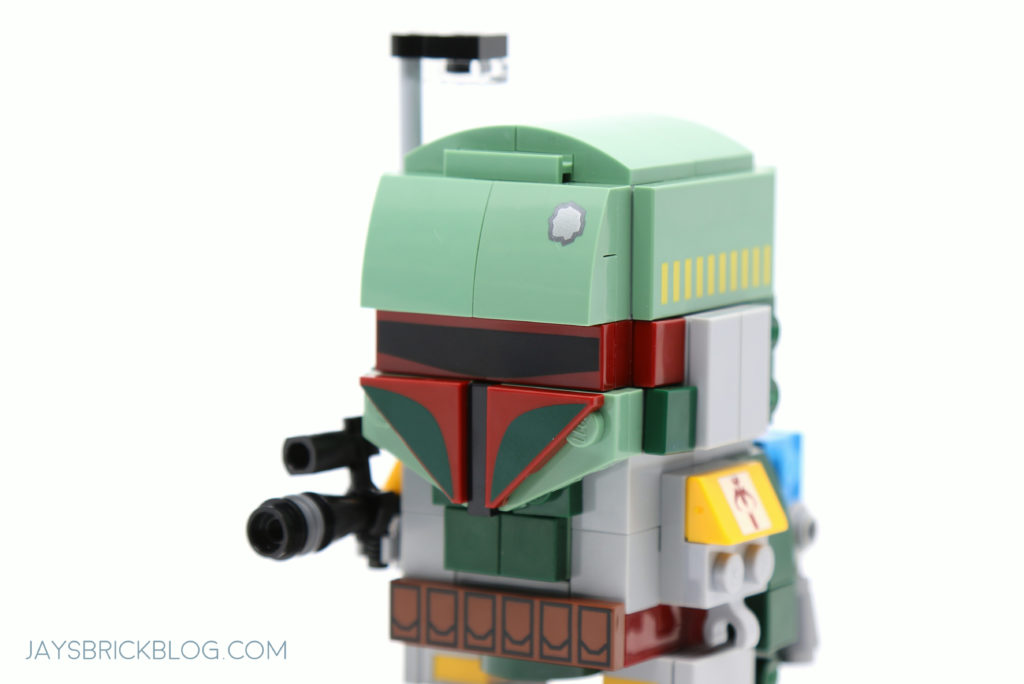 His helmet is quite intricate with great use of gaps and cascading tiles to give it a 3-dimensional look.

Printed elements were also aplenty, with his bandolier belt, helmet, sides and even shoulderpads. 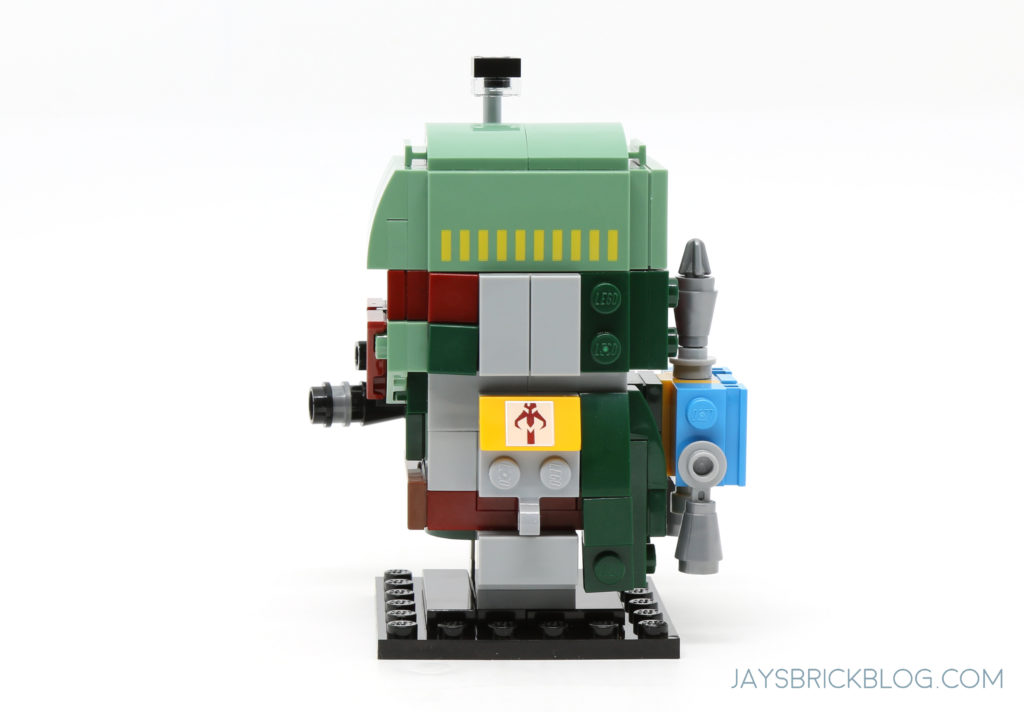 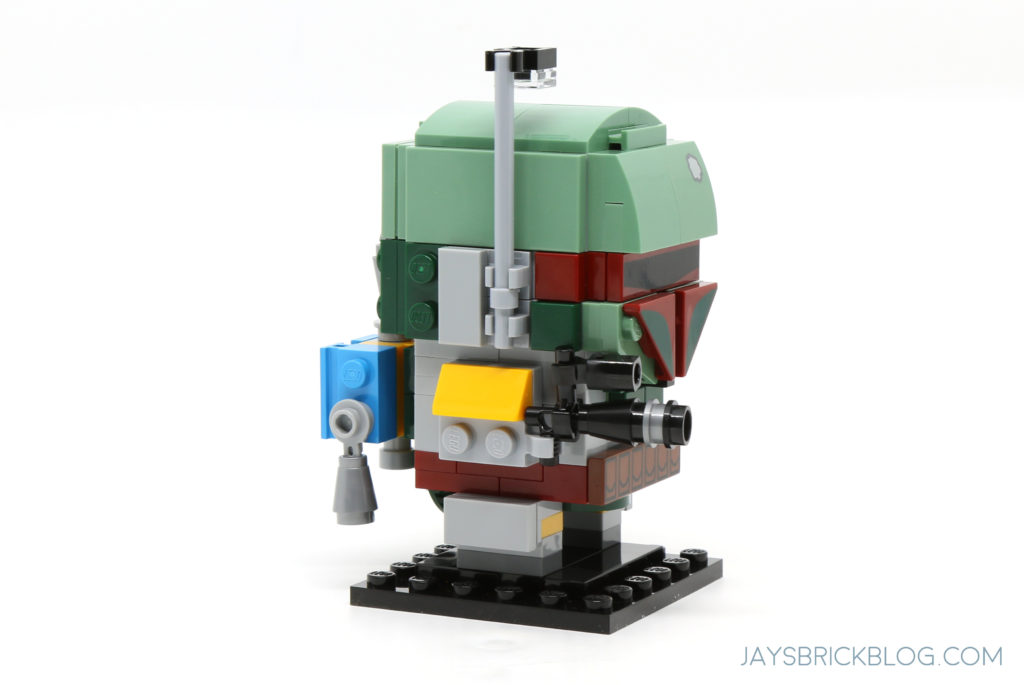 Here’s how Boba Fett looks from the sides. On his right, you can see that he has a cute little blaster aimed forwards. You can also see his range finder (not antenna!) on his right, which is another cool bit of detail that’s part of Fett’s iconic aesthetic. 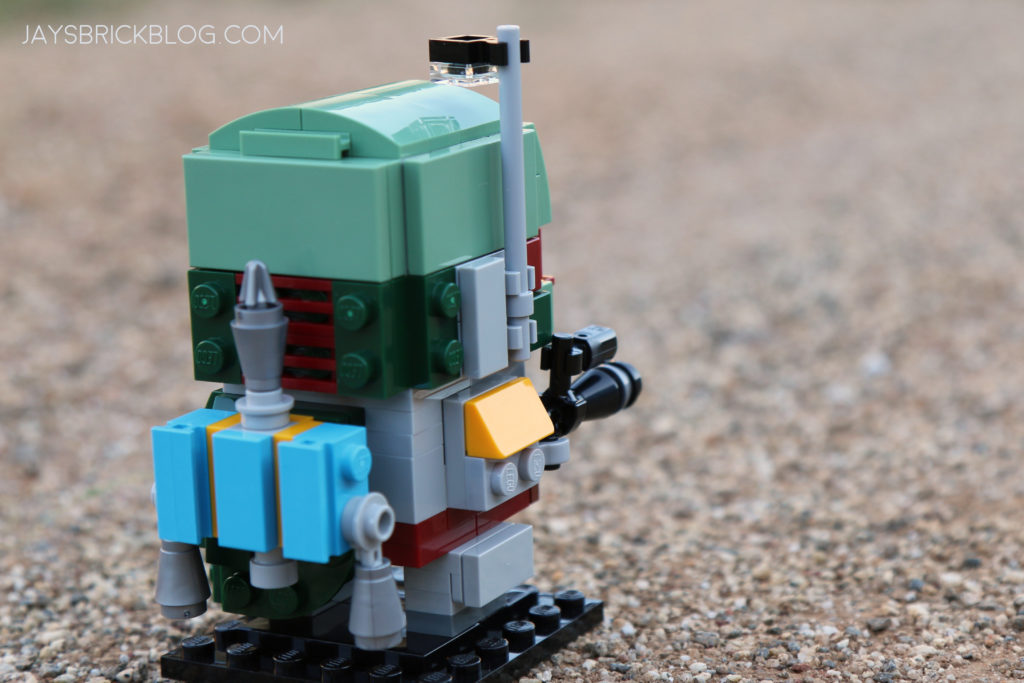 From the back, he also has a jetpack. It’s mostly light-blue, with silver accents – I wish the colours were a bit more muted as it sticks out a bit too much. 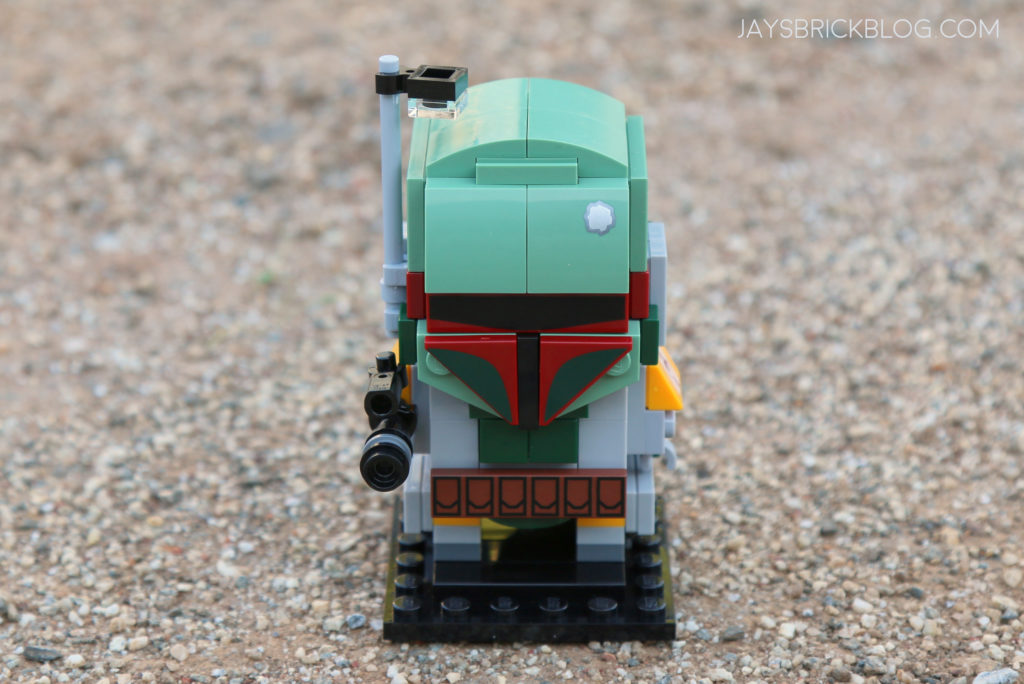 From each angle, Boba Fett is quite pleasing to look like, and I have to say, one of the best Brickheadz that LEGO has ever designed.

There are small bits of detail that give him a complete look, instead of being too blocky and flat and the prevalence of accessories such as his gun, jetpack and targeting reticule does help make him look more animated. 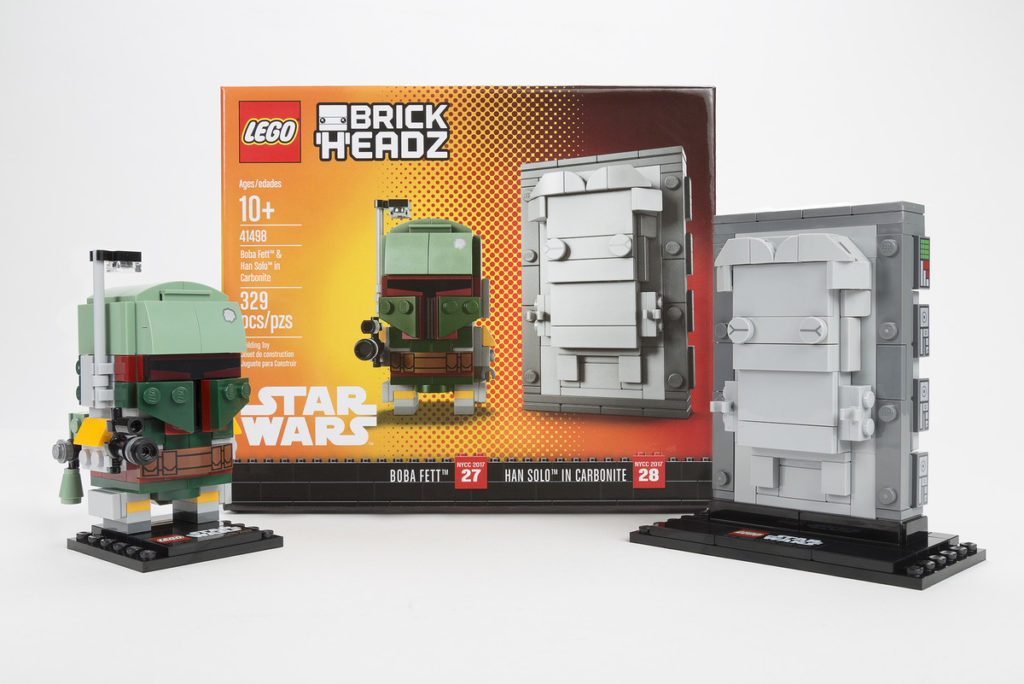 The sheer number of printed elements is also great, and makes this a massive improvement over the San Diego Comic Con version that was released this year. Kudos to LEGO for mass-producing a superior version – I distinctly recall this set being sold for hundreds of dollars on eBay when it was released. 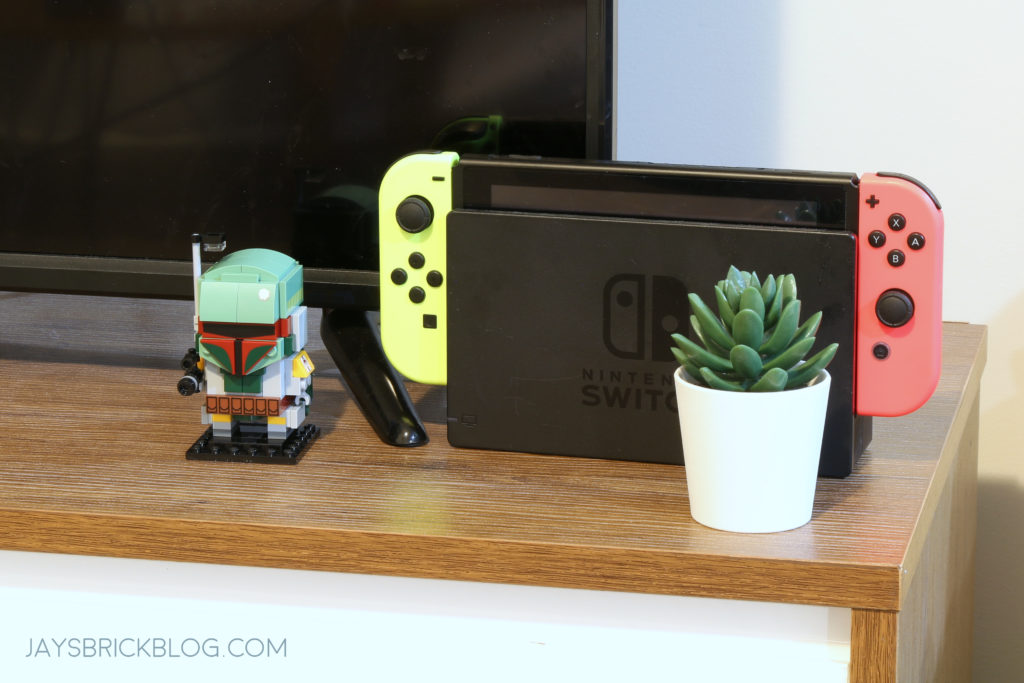 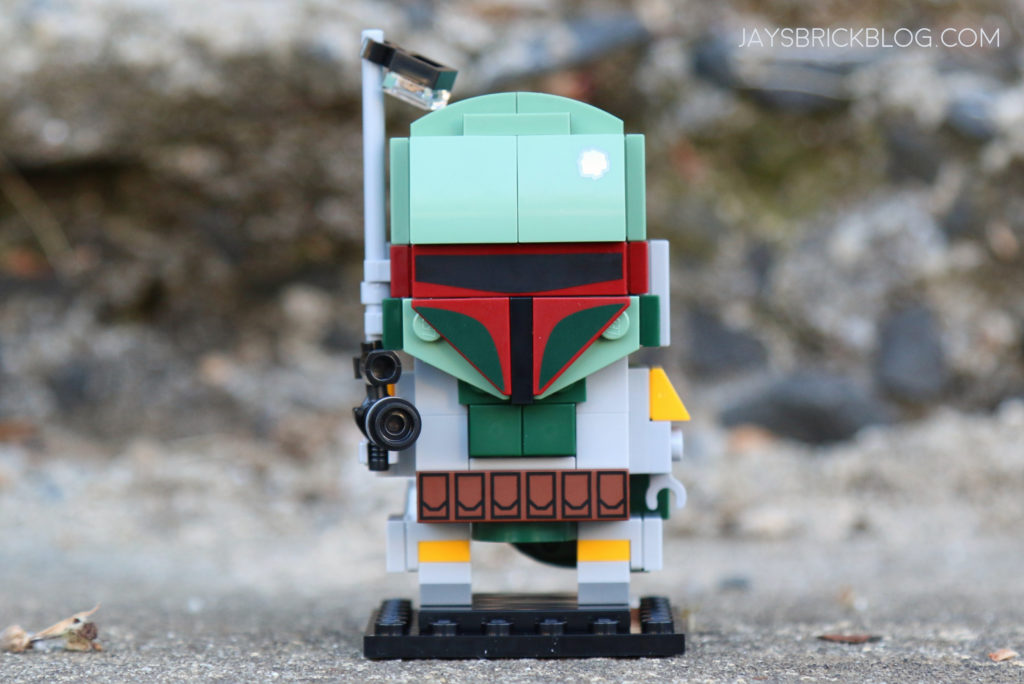 Final thoughts: I really enjoyed the Boba Fett Brickheadz, and honestly think that this might be the best Brickheadz ever designed by LEGO.

For Star Wars and Boba Fett fans, this one is an easy one to recommend, because after all, who doesn’t love Boba Fett?

Despite what you think of Brickheadz, this is a particularly solid set, and makes a great desk ornament in your workplace, study, or even next to your LEGO Star Wars display.

The set’s popularity and fairly limited ranging might make it quite difficult to pick up for the average LEGO fan, but if you’re able to find one, it’s well worth its asking price.

It also makes for a great Christmas gift/stocking stuffer, so as we’re approaching the festive season, consider the Boba Fett Brickheadz if you need to buy something for a Star Wars fan – the set is really easy to get into, and will also appeal to non-LEGO fans.

Thanks for reading this relatively short review!

Now that the year is wrapping up, what is your thought on LEGO Brickheadz? Would you be disappointed if the theme gets deleted/retired next year? Which were some of your standout picks this year – let me know in the comments!