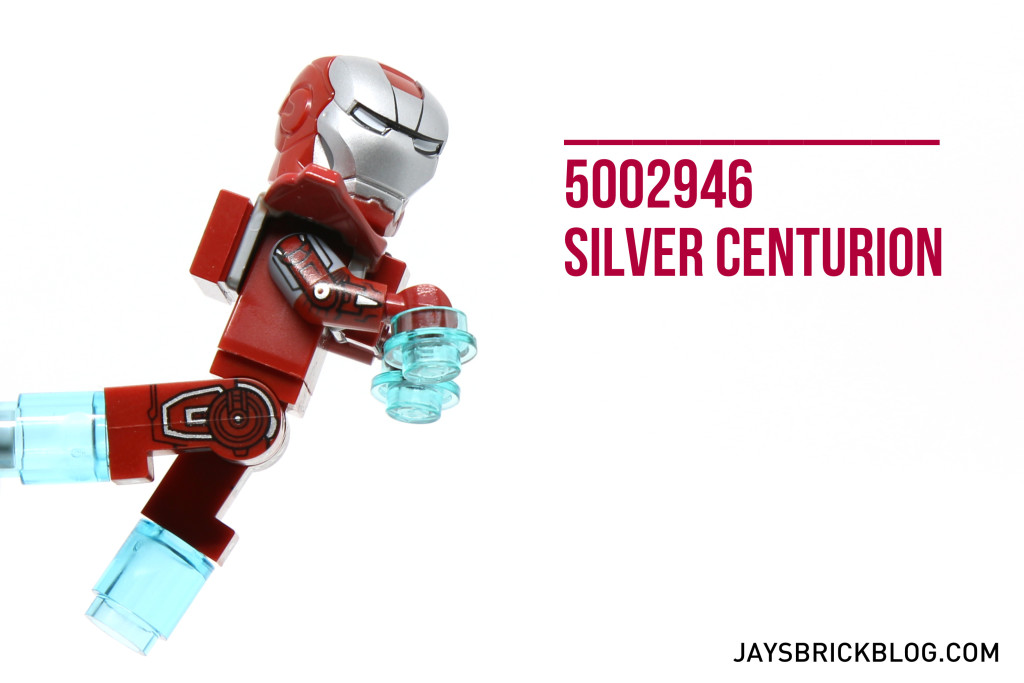 The preorder bonus was an EB Games exclusive here in Australia, and in the US, I believe that it’s with Gamestop. I picked up a copy of the game (despite me not being much of a console gamer) so that I could get my hands on the Silver Centurion polybag. Here’s a short review and plenty of photos of the brand new LEGO Marvel Super Heroes polybag.

While I don’t play video games, the game seems to be reviewing quite well by game critics! 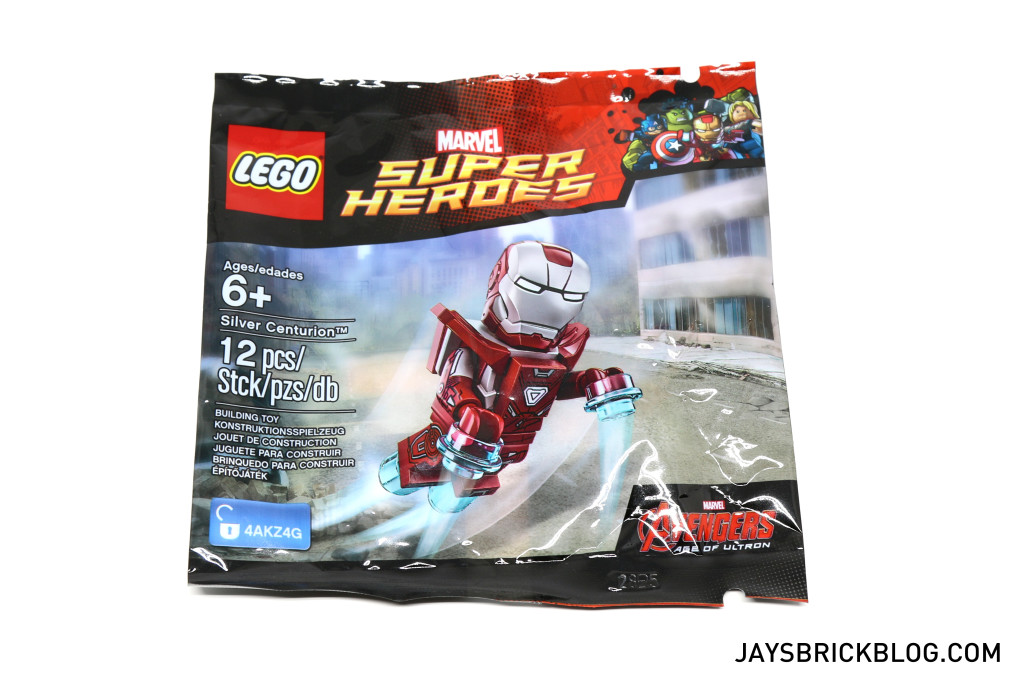 Here’s the photo of the polybag of 5002946 Silver Centurion. The Silver Centurion armour or Mark 33 featured quite briefly in Iron Man 3, where Tony Stark activates the “House Party Protocol” – you know, the scene where he summons all his Iron Man armours from his home. It was my favourite and most memorable scene of the movie, so it’s great that we’re getting yet another Iron Man suit.

Strangely enough, the polybag is branded with Avengers Age of Ultron which is odd since the Mk 33 Armour didn’t show up in that movie. 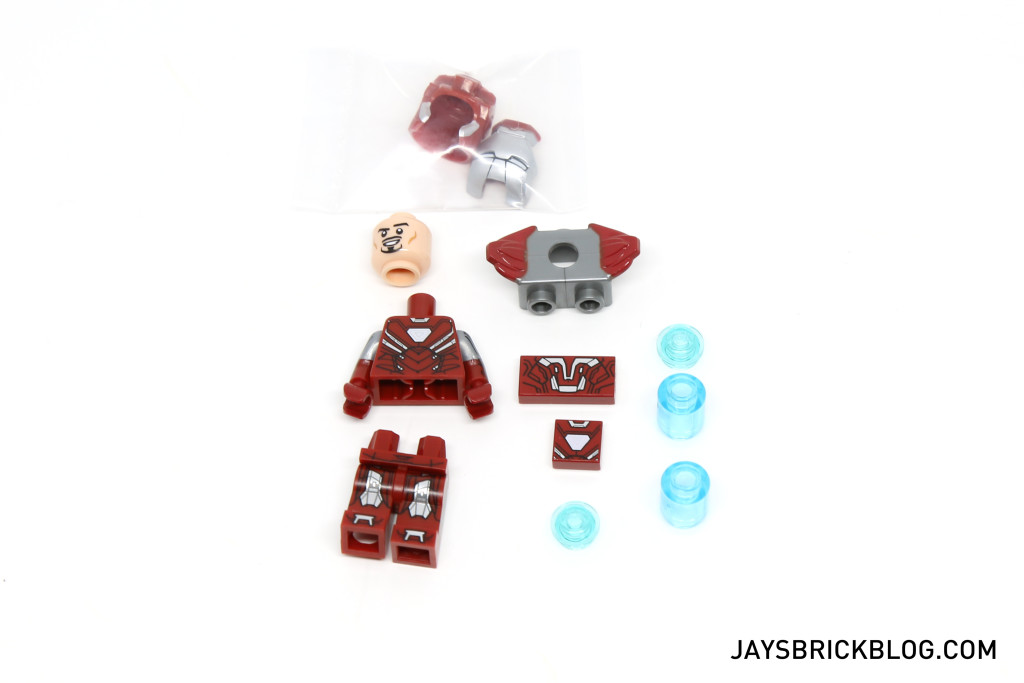 Here are the contents of the polybag, 12 pieces that make up the Silver Centurion minifigure. Also included are some transparent studs for the repulsor effect from his palms, as well as two 1 x 1 round bricks for leg propulsion. 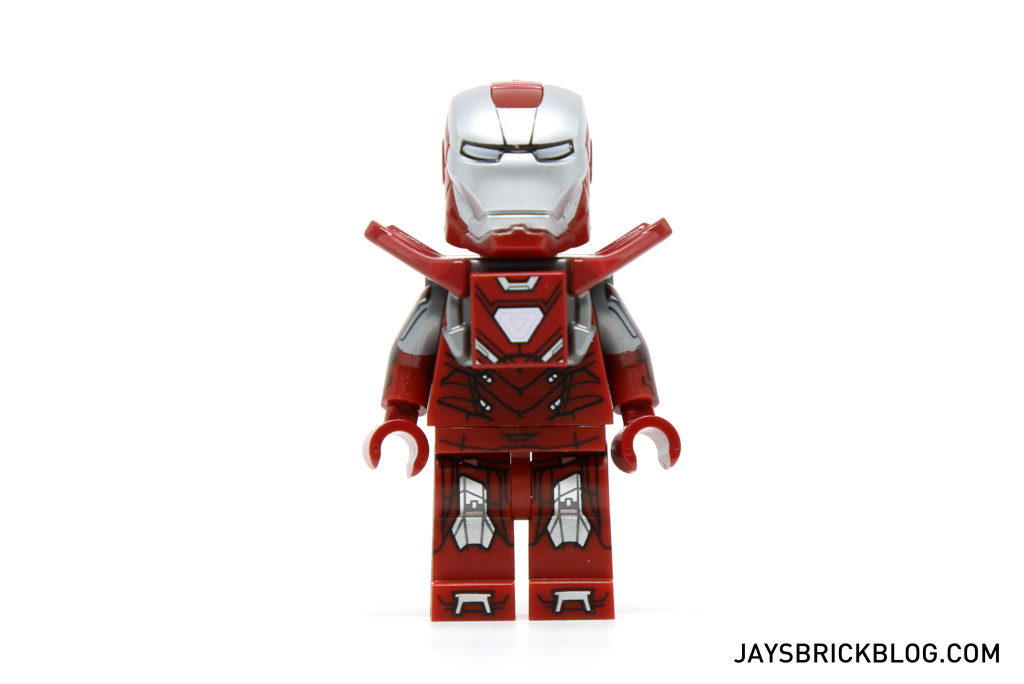 The Silver Centurion minifigure is bound to excite LEGO Marvel Super Heroes fans as it’s the very first Iron Man minifigure with an additional piece of armour (the Hulk Buster suit doesn’t count obviously). The Mark 33 armour is defined by its angular polygonal shape, which is accentuated by the additional chest armour with the sharp shoulderpads that point outwards.

I also really like the crimson and silver colour scheme, it looks incredibly eye catching and is a nice variation from the usual red and gold Iron Man armours. 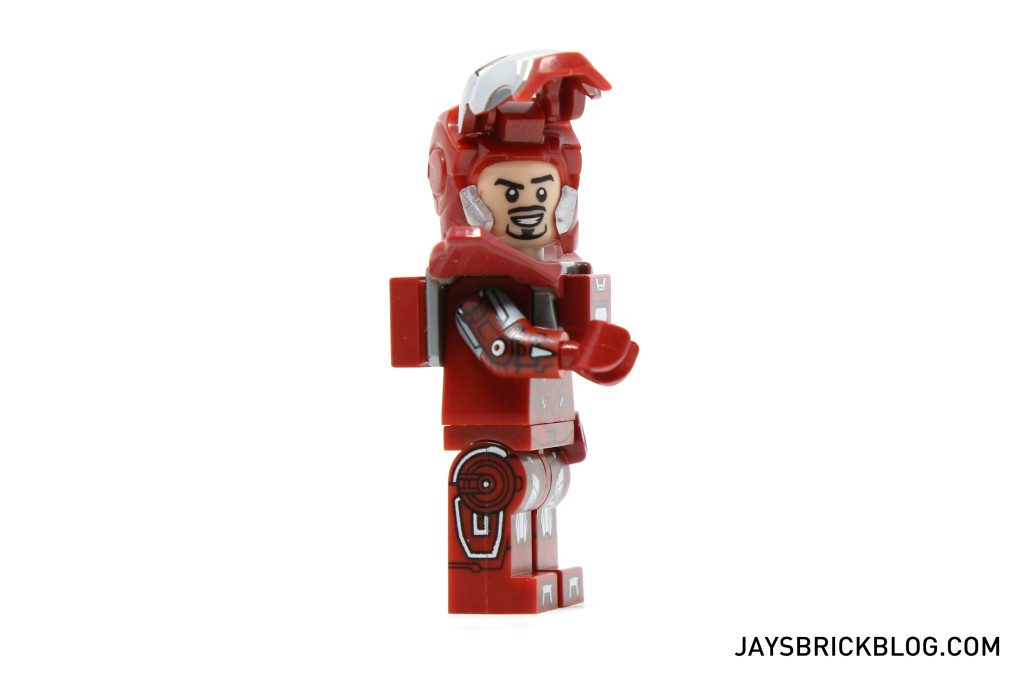 As LEGO Iron Man armours go, the Silver Centurion is currently THE most insanely detailed one. The amount and intricate levels of printing just blew me away. Boasting ridiculously sharp printing on his torso, legs, sides of legs and arms – the Silver Centurion Mnifigure is just a treat for the senses. 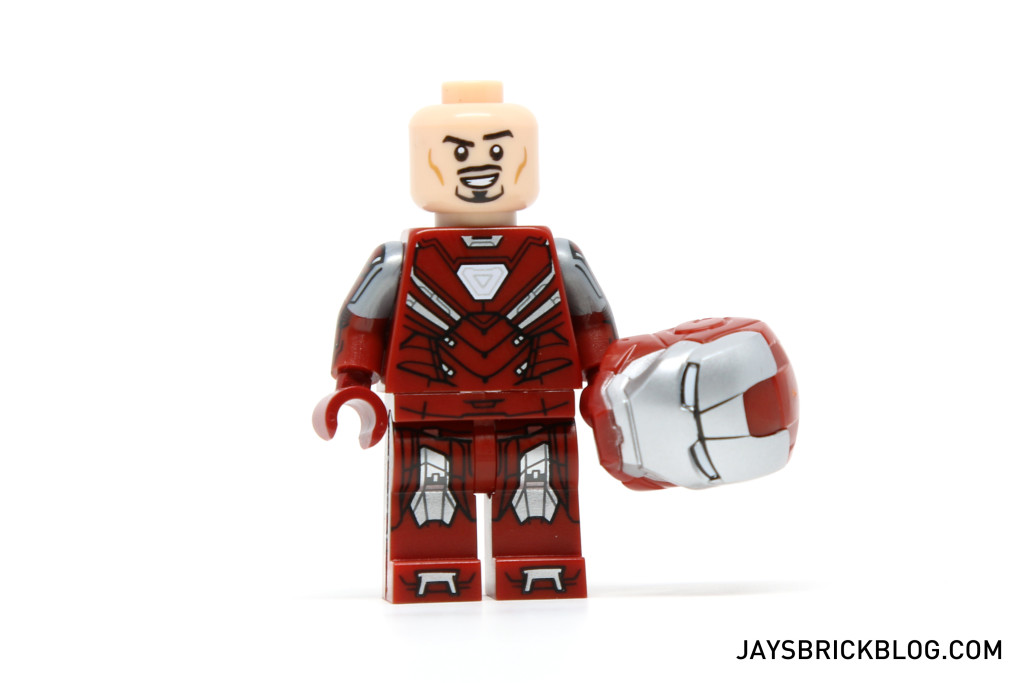 Tony’s main face bears the usual quizzical smug expression with one eyebrow raised. Here you can also appreciate the printing on his torso and legs. LEGO have really stepped up their minifigure printing game and I love them for it. 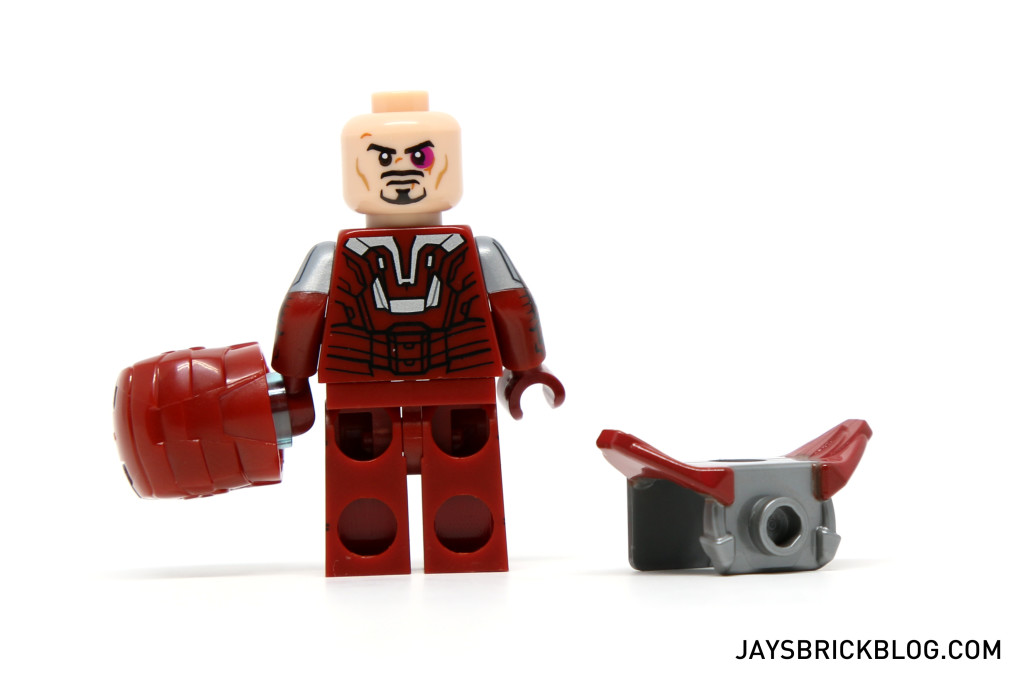 Here’s a look at the back printing, which has more armour details and also a look at Tony Stark’s alternate face which features a huge bruise on his left eye as well as some blood seeping out of his lips. It’s quite a fitting expression, as Tony Stark nearly got killed in Iron Man 3 when he was going up against Aldrich Killian. 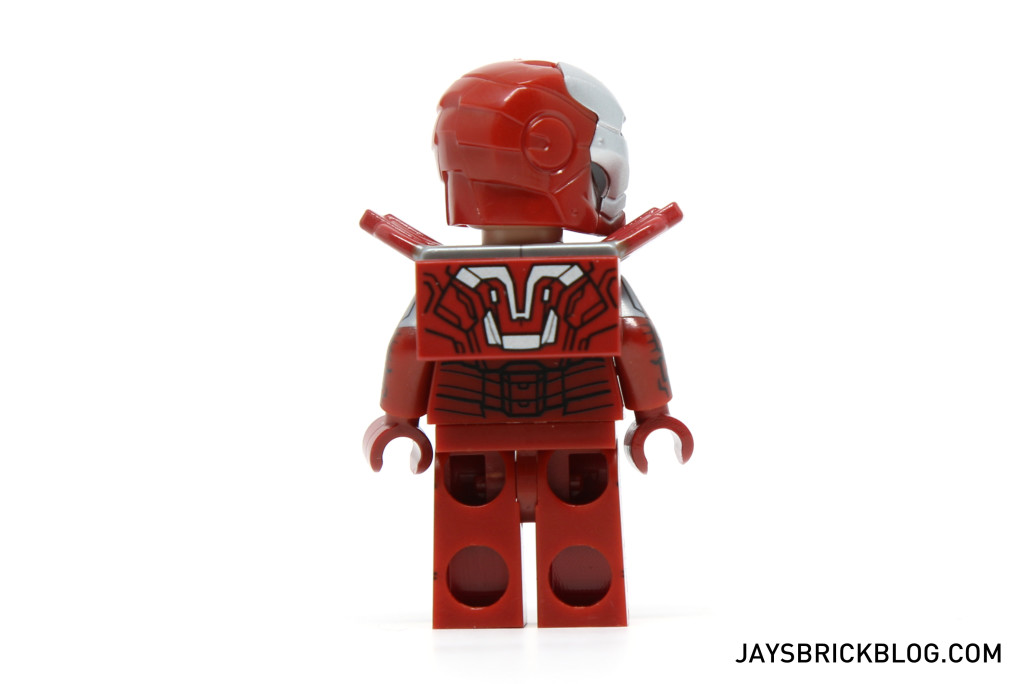 Here’s a look at the Silver Centurion and some other Iron Man minifigures and boy, does it stand out in a great way.

I walked away very impressed by the Silver Centurion Minifigure and consider this a must-buy for LEGO Marvel Super Heroes and Iron Man enthusiasts. It’s a brilliant addition to your Iron Man collection, and those of you who are attempting to one day build your very own Hall of Armours will definitely want to own what is such a distinctive and wonderfully designed Iron Man suit.

Prices are insane on eBay Australia right now (3 have sold for AU$60, which costs more than the game itself) and I hope they stabilise a little once more of them flood the market. I’ve read several accounts in the US where people were able to walk into Gamestop stores, purchase the game and request the polybag (provided they have stock).

No idea if Australia’s EB Games stores would allow this, but it’s always worth a try if you’re desperate and unwilling to pay extortionist prices on the secondary market.

Thanks for reading my review! Let me know what you think about the Silver Centurion minifigure in the comments!