It’s really funny. Just two weeks ago in my Hulk minifigure review, I was freshly lamenting the fact that Australia almost always gets shafted when it comes to promotional polybags when out of nowhere, Big W surprises everyone with a catalogue offering a free Force Awakens C-3PO polybag with any LEGO purchase above $30!

It’s the closest thing we’ll get to a Christmas miracle and some sort of divine sign that the LEGO gods have not forsaken Australia! I got my polybag a few months ago from an overseas friend, so I figured this would be a good time to feature it while the promotion is live. 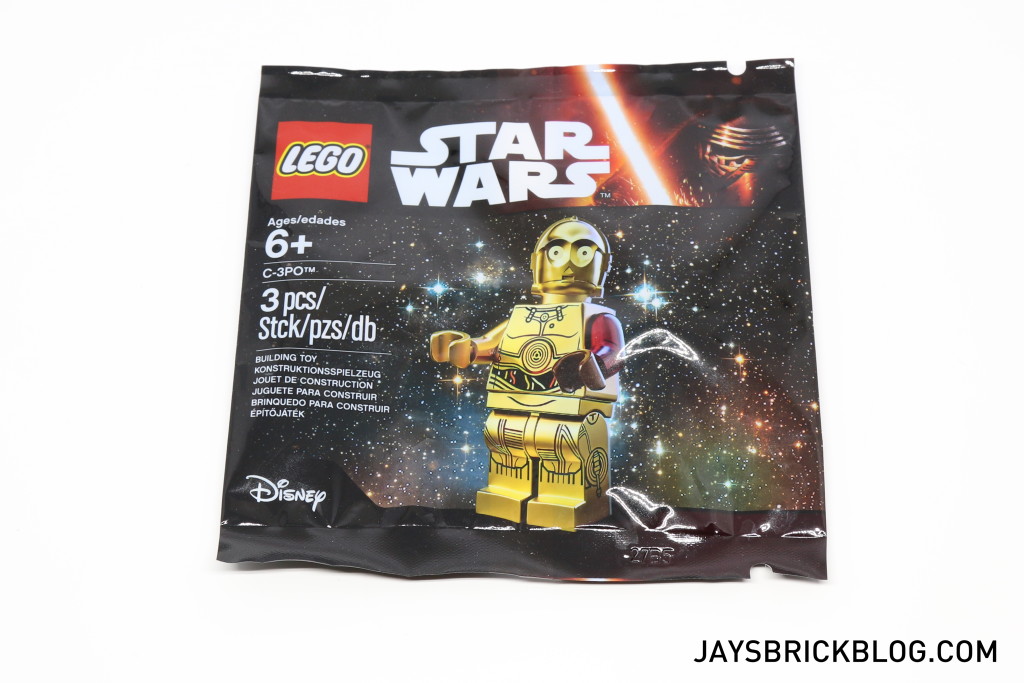 Here’s a look at the polybag – it’s got a pretty epic design, with burst of colours set against a starry backdrop and Kylo Ren staring menacingly from the top right corner. I have to say that the illustration of C-3PO is extremely misleading as the image has been enhanced/doctored too much that it actually gives you the impression that the minifigure is chrome-y and shiny – which is certainly not the case. 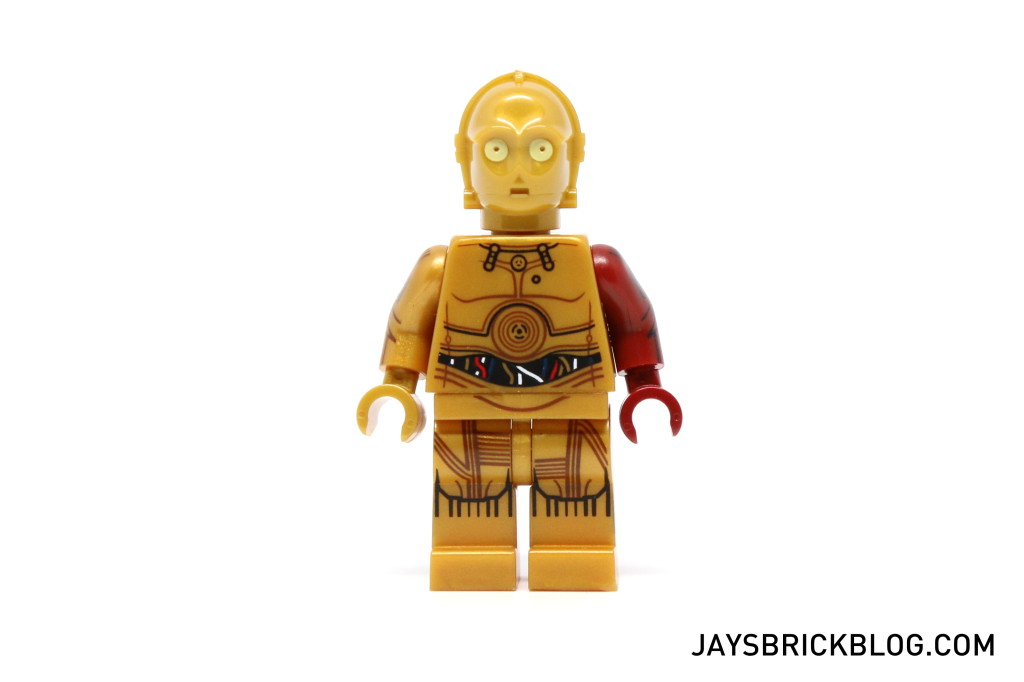 Here’s a look at the brand new C-3PO minifigure from Star Wars Episode 7: The Force Awakens. Unlike the illustration, which gives you the impression that C-3PO is all sparkly and reflective, the truth is that he’s cast out of pearl gold. For the unaware, I’m pretty sure that they’ll be extremely disappointed upon opening up the polybag to discover that the minifigure isn’t as shiny as the illustration.

C-3PO has gotten a bit of an upgrade and his entire torso and legs are covered in some pretty impressive printing. The fine little details and lines are all sharp and crispy, as a 2015 minifigure should be. His midriff still bears the exposed wiring and he now has printing on his legs which look very nice but for the fact that they stop abruptly halfway. 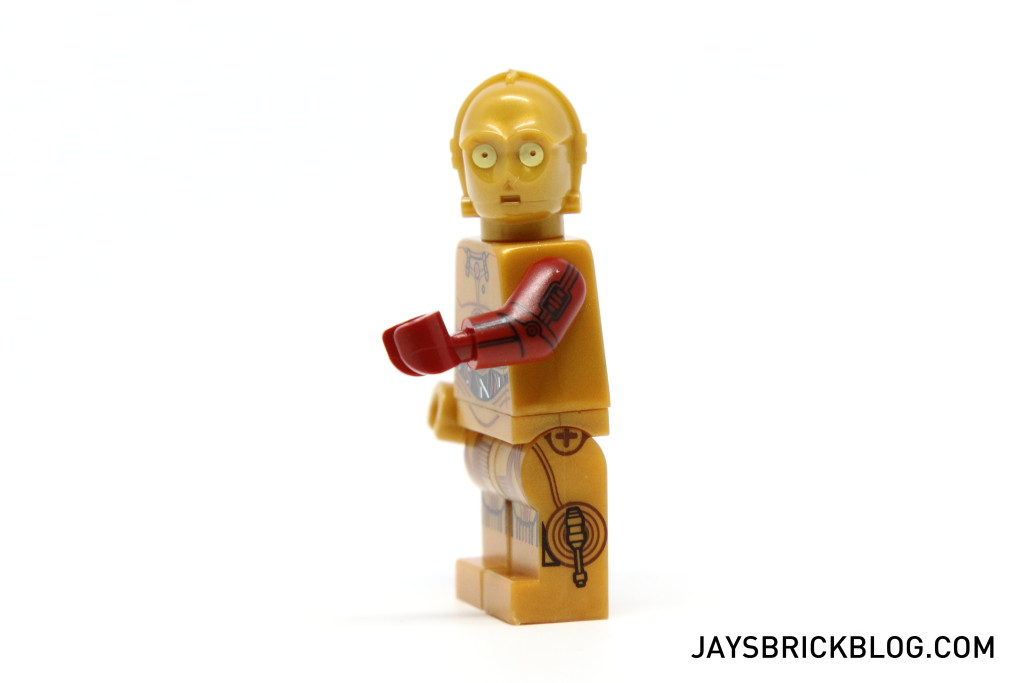 The most interesting thing about everyone’s favourite protocol droid is his brand new mysterious red arm. Oh and the sides of his arm and legs are printed as well which makes it look incredibly complete as a minifigure.

No one knows why the red arm is there but Disney has announced that the explanation will be coming via a comic book sometime in December. C-3PO has always been cobbled together by random parts, so it’ll be interesting to find out about his swanky new arm – which should reveal his adventures between Return of the Jedi and The Force Awakens.

Star Wars has a well-documented trend of cutting hands off (Darth Vader, Luke Skywalker) so maybe 3PO got into a spot of trouble and had to pay the ultimate price? 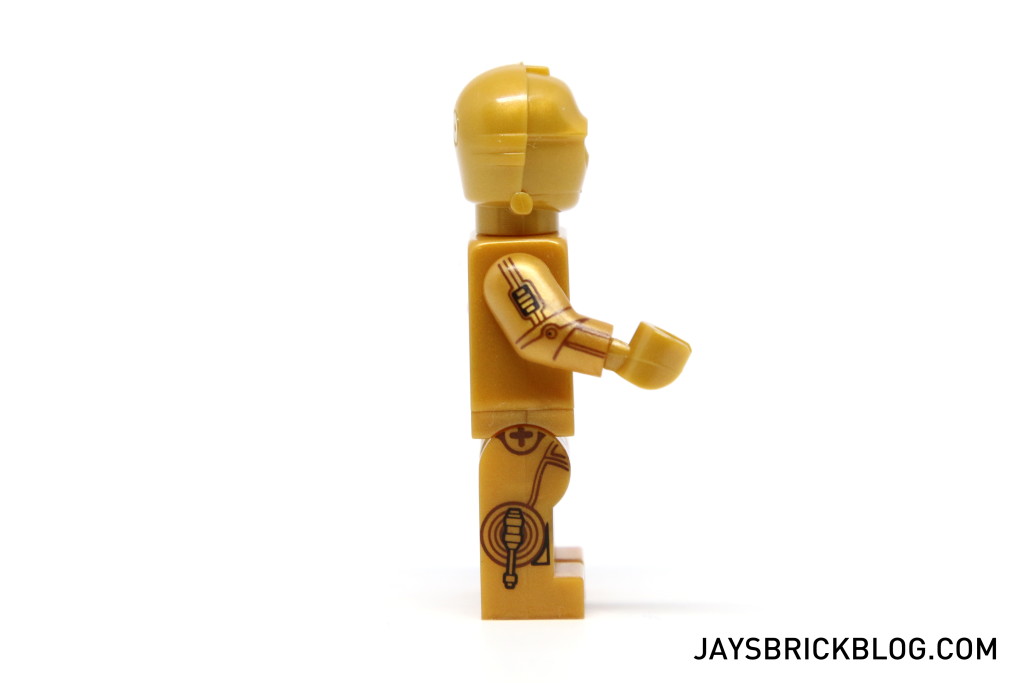 Here’s a look at his right side, where you can see the same side prints on both his arms and legs. Very very good looking and part of me can’t wait when they finally implement side torso printing! Not too far in the future, I hope! 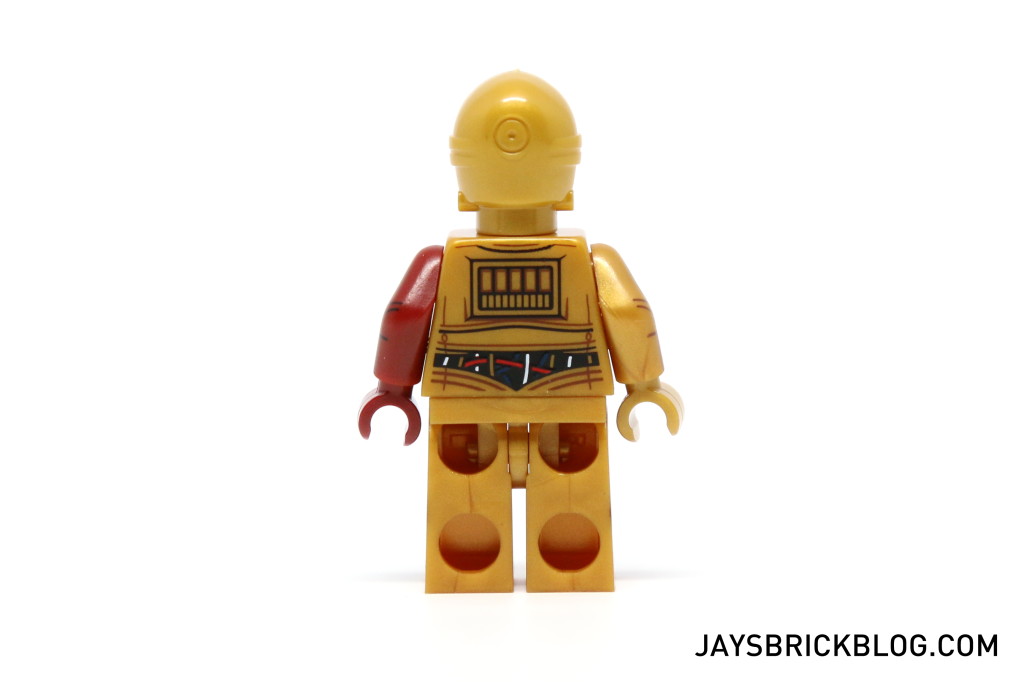 C-3PO also has back printing which is equally as sharp as his front. 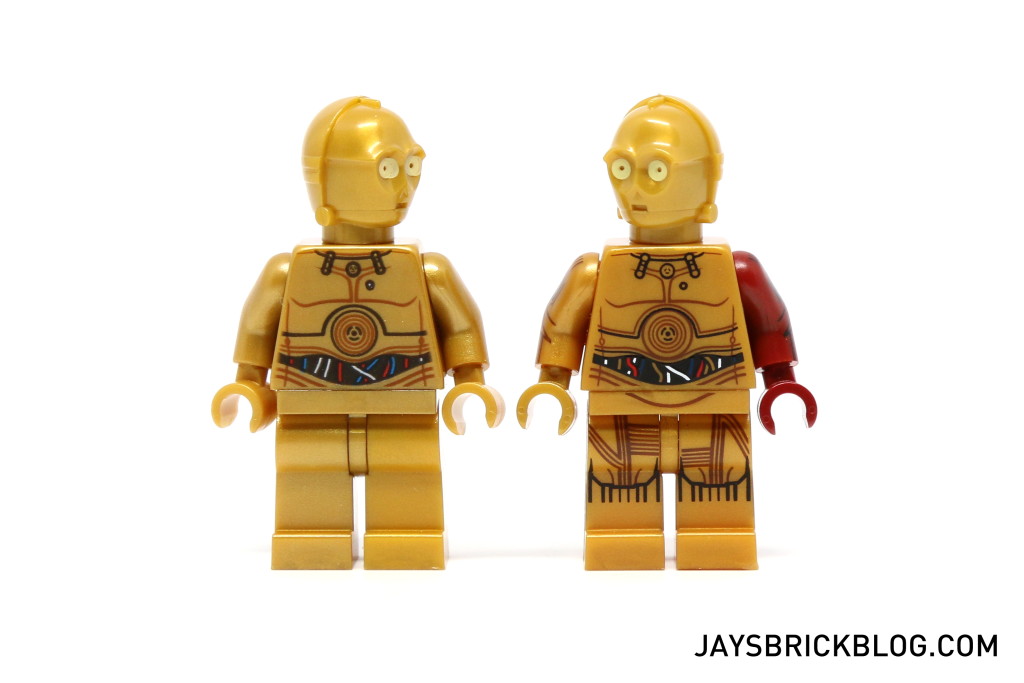 In case you were wondering what the major changes are, here’s a look at an older version (from 9490 Droid Escape) on the left.

When placed side by side, you start to notice a few flaws with the new C-3PO minifigure. The Force Awakens’ C-3PO’s torso and legs make use of a slightly darker shade of pearl gold, which doesn’t quite match the lighter shade used for his head. The older C-3PO is a lot more uniformed and once I took notice of this, it became quite jarring to me.

Don’t think it was quite a smart move by LEGO to not recast the head. It’s a very minor cosmetic blemish and most people might not notice it but it’s kind of a disappointment seeing as how everything else about the minifigure is stunning. 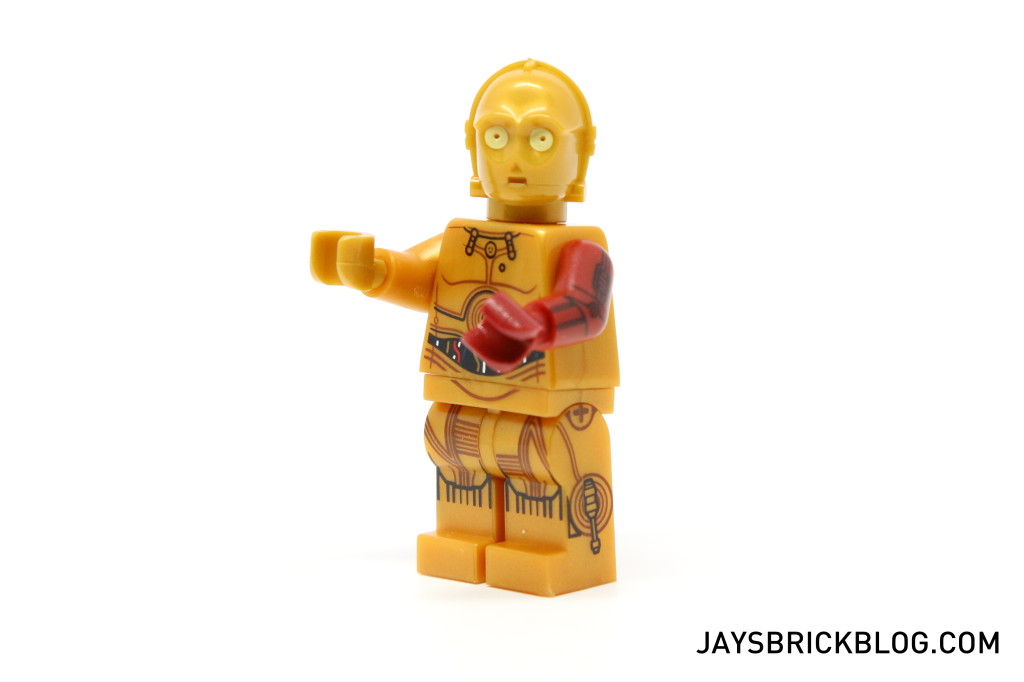 It’s unclear if C-3PO will show up in any retail The Force Awakens sets, but he definitely doesn’t feature in any of the ones that are available for purchase right now or the new wave which hits in January, so if you want to get your hands on the fan favourite golden protocol droid, you should get down to Big W and see if there are any left.

Alternatively, you can also get your hands on the C-3PO polybag on LEGO.com by purchasing more than $45 of Star Wars products in a single purchase. It should show up in your cart once you cross the threshold. No idea how long this promotion will last online, but it could be a good time to combine it with other online purchases to get the seasonal Christmas Gingerbread House set which is yours when you buy more than $120 worth of LEGO online.

With C-3PO being a cornerstone Star Wars character, it would be ludicrous to imagine that he won’t show up in any other sets but hey, if you want him now, the polybag is your only option.

Hope you’ve enjoyed my review! Let me know in the poll below if you’ve gotten the polybag, are planning to get it or won’t bother at all.

For more, be sure to check out the Review Hub to read more Promotional Polybag reviews.

Here's an early look at 71411 The Mighty Bowser ah

Some of my favourite Easter Eggs from the @lego @t